It didn’t take long to blow the Honduran dust off my camera. Leon, one of two legendary cultured Spanish colonial jewels in Nicaragua, is a pretty & vibrant city full of history & churches. After suffering through something of a photography lull for the last few days in Honduras, Leon is a city that got my camera busy again. Excited again. Oh yes; this is (much) more like it. 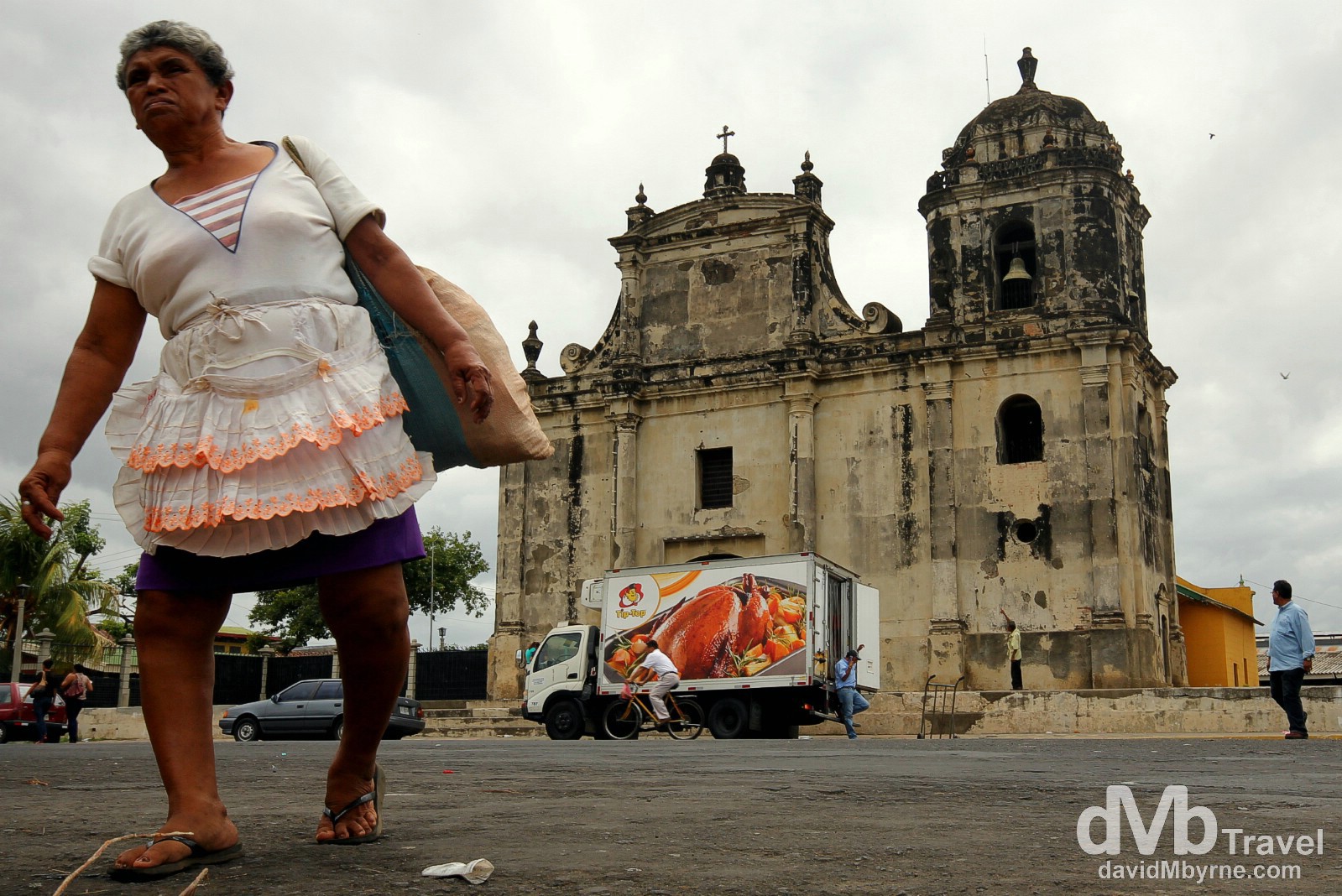 Leon, my first stop in Nicaragua, is one of the most historic & picturesque Spanish colonial towns in not only Nicaragua but also the whole of Central America. I’d been looking forward to getting here, to seeing what all the fuss was about. It didn’t disappoint. Needless to say it has quite a few rather impressive buildings, including none other than the largest church in Central America. 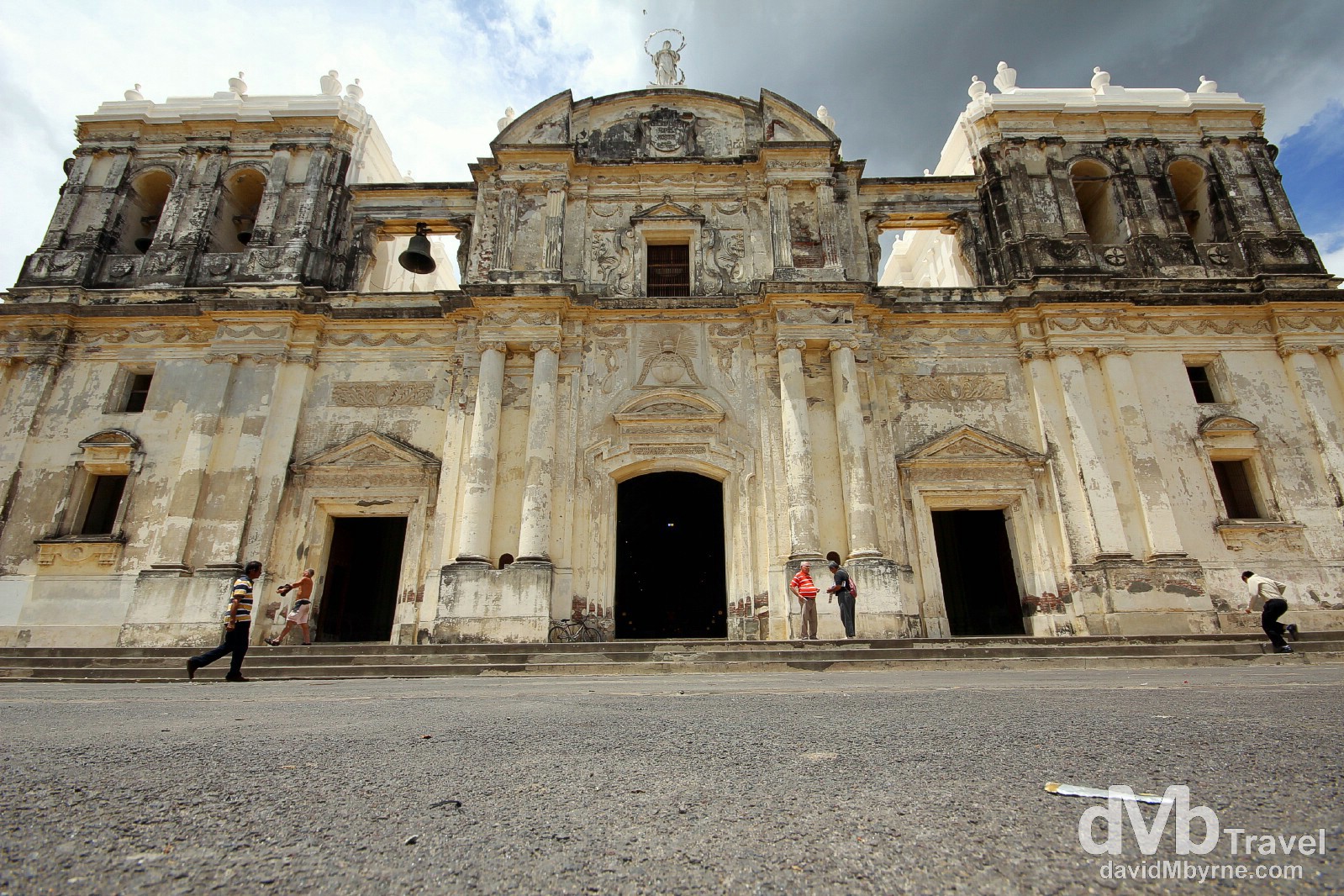 The façade of Leon Cathedral in the city’s Parque Central. In a city boasting no less than 16 churches (the city tourist board is lobbying to have Leon officially declared ‘The City of Churches’), its massive cathedral is easily its most famous structure. The UNESCO-listed building is the largest church in Central America & one of only two UNESCO-listed attractions/sites in Nicaragua (the other being the León Viejo ruins, not too far from here). Construction began in 1747 and lasted for 100 years and by the looks of things the building hasn’t received any upkeep since – although that said, it is presently in the process of getting a much needed scrub, with white, spruced-up sections noticeable at the very top of the façade. The sober interior, a pantheon of Nicaraguan culture, is noted for its decoration & abundance of natural light. It houses the tombs of various Nicaraguan literary & independence movement figures as well as masterpiece paintings depicting the Stations of the Cross by famed Nicaraguan artist Antonia Sarria. Leon, Nicaragua. June 16th 2013. 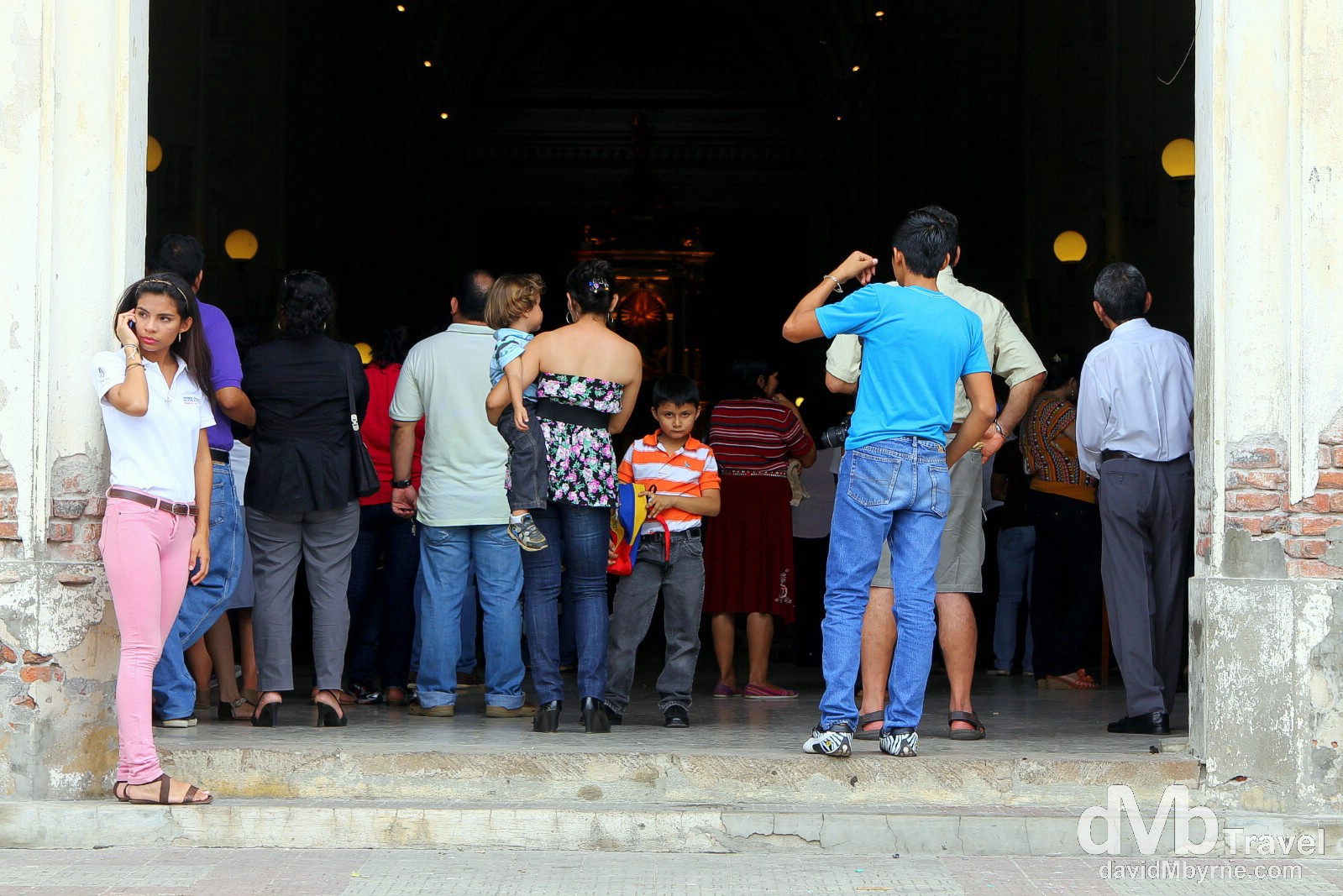 Service overflow on the steps of Leon Cathedral. Churches here seem to be open at times of a service only, something I find strange (& in my experience not the Central American norm). Leon, Nicaragua. June 16th 2013.

While I was here the earth shook. It was a tad nervy.

The Nicaraguans didn’t pay much heed to the rumble; tremors seems par for the course here in what is the most volcanic region in the world – northwest Nicaragua alone houses no less than 10 volcanoes. 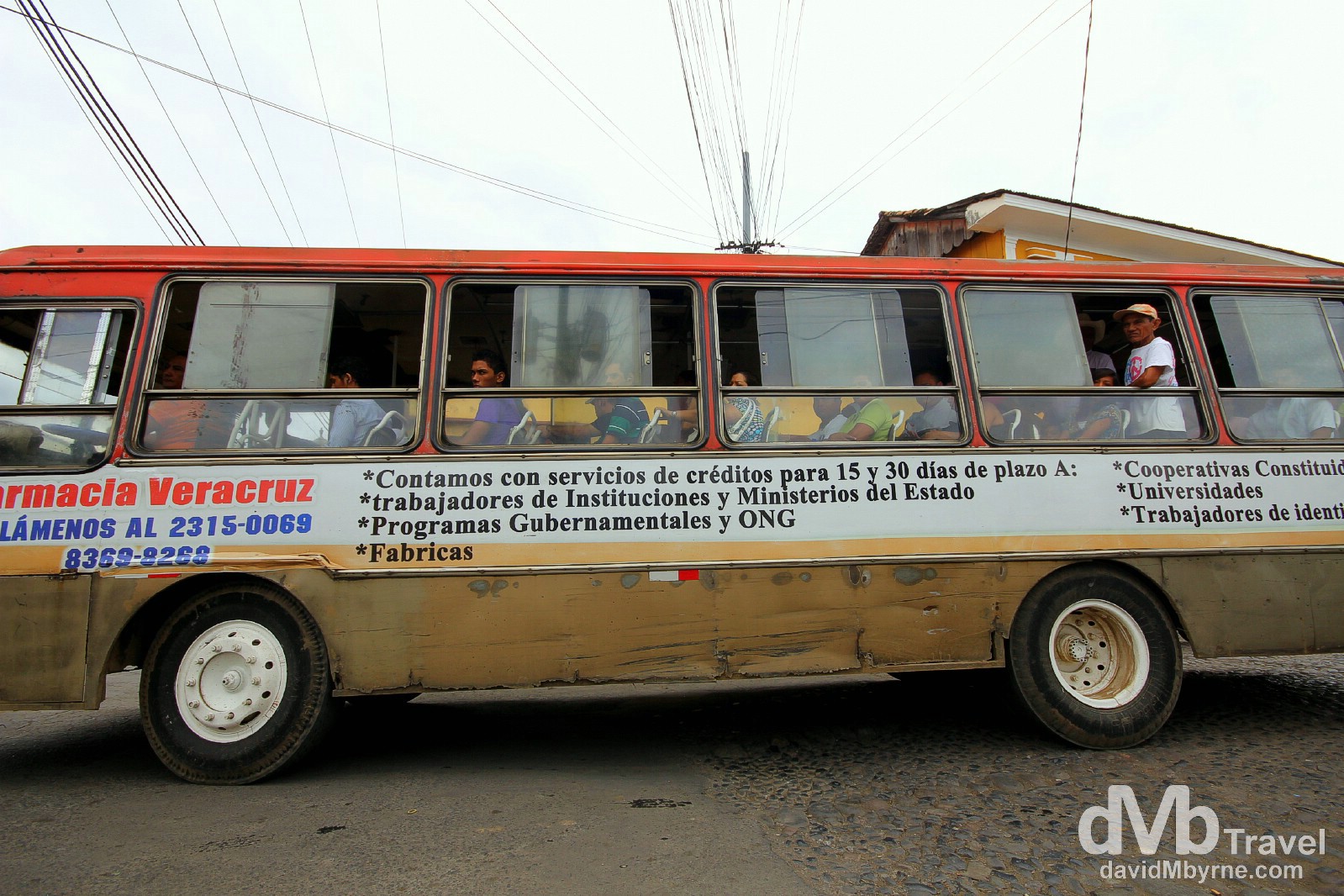 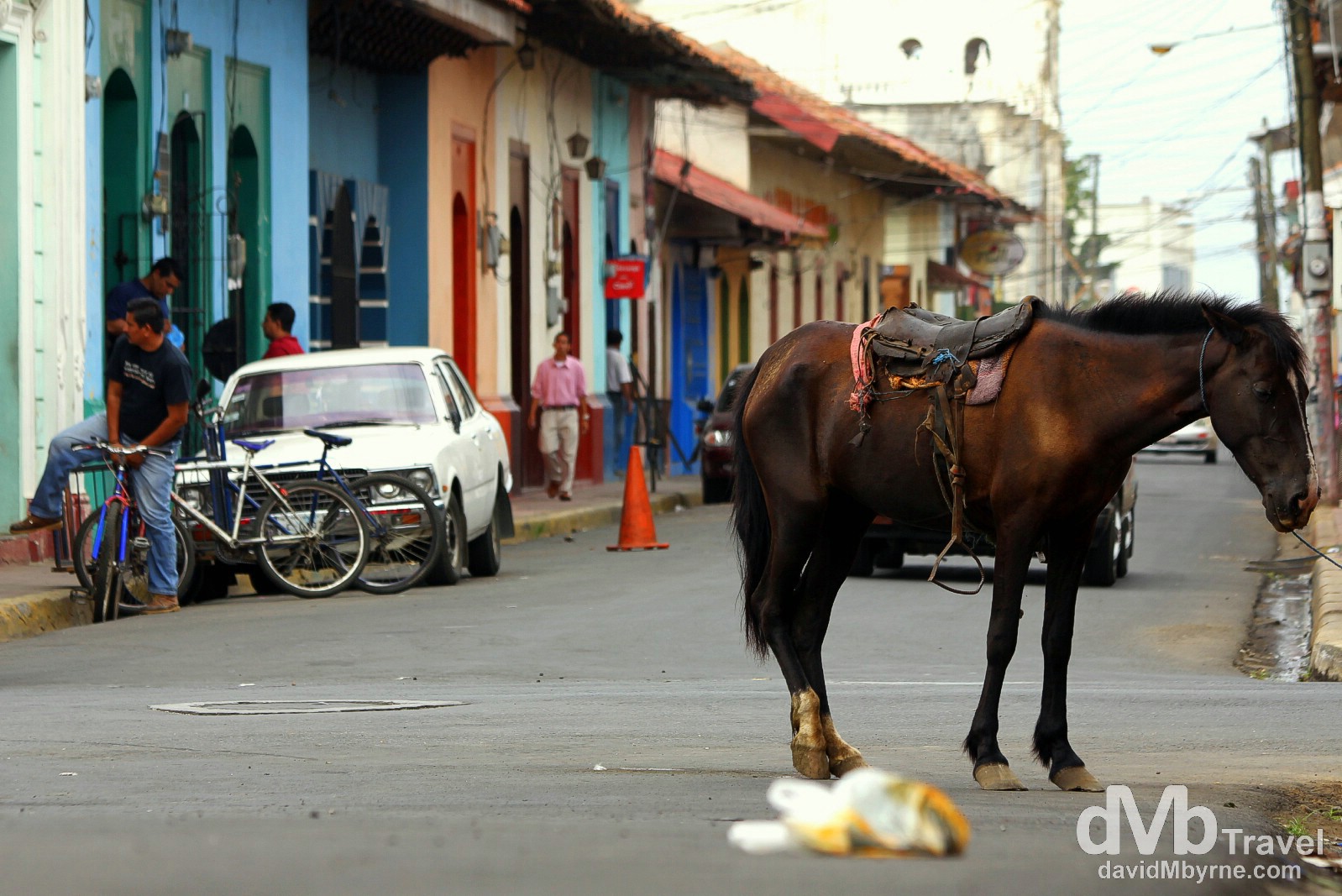 A Real Tale of Two Cities
The often bloody but fascinating history of Nicaragua is a real Tale of Two Cities, the two legendary cultured Spanish colonial jewels of Leon & Granada, two of the oldest & most historic colonial cities in the Americas. Both were founded by the Spanish in 1524, only 2 years after they colonised the country having made incursions from their settlement further south in Panama. The Spanish assigned Leon their colonial capital but Granada, only a few months older than Leon & thus the oldest city in the Spanish New World, grew wealthy thanks to its strategic location – it had, via the Rio San Juan & Lake Nicaragua, a direct shipping route to the Caribbean & thus Europe making it very influential in the days that pre-dated the Panama Canal.

Rivals from the get-go, the cities continued to feud even when Nicaragua gained its outright independence in 1838 resulting in full-blown Civil War in the 1850s – even the 1857 establishment of a neutral capital, Managua, midway between the two cities didn’t quell the fighting. The most recent & well-documented Civil War of the 70s & 80s – in which the Americans threw their weight behind the Conservatives from Granada fighting against the liberals from Leon, the FSLN – ravaged the country. Scars still remain today, not only from war but from the natural disasters that blight the region – take your pick from hurricanes, earthquakes or erupting volcanoes. 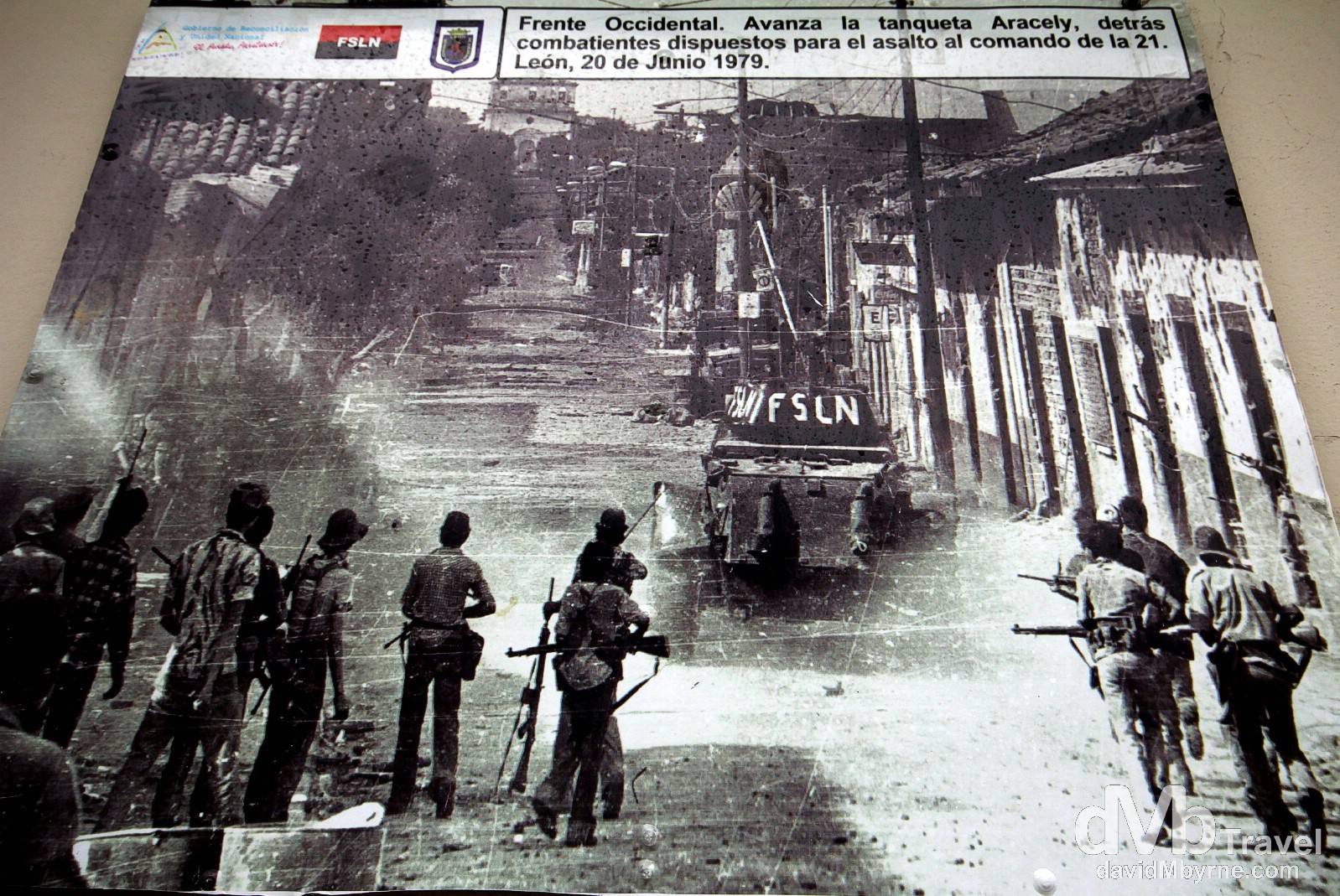 This is a picture of a picture I found hung outside a museum on the streets of Leon, a picture showing FSLN troops in the streets of the city during the Civil War of the 70s & 80s. Even today some buildings, especially churches, still sit in bombed ruin and bullet holes are clearly visible in many city structures. Nicaragua is a country that is clearly trying to erase the visible scars of its warring past but one that can’t afford to do so, at least not here in Leon. Leon, Nicaragua. June 15th 2013 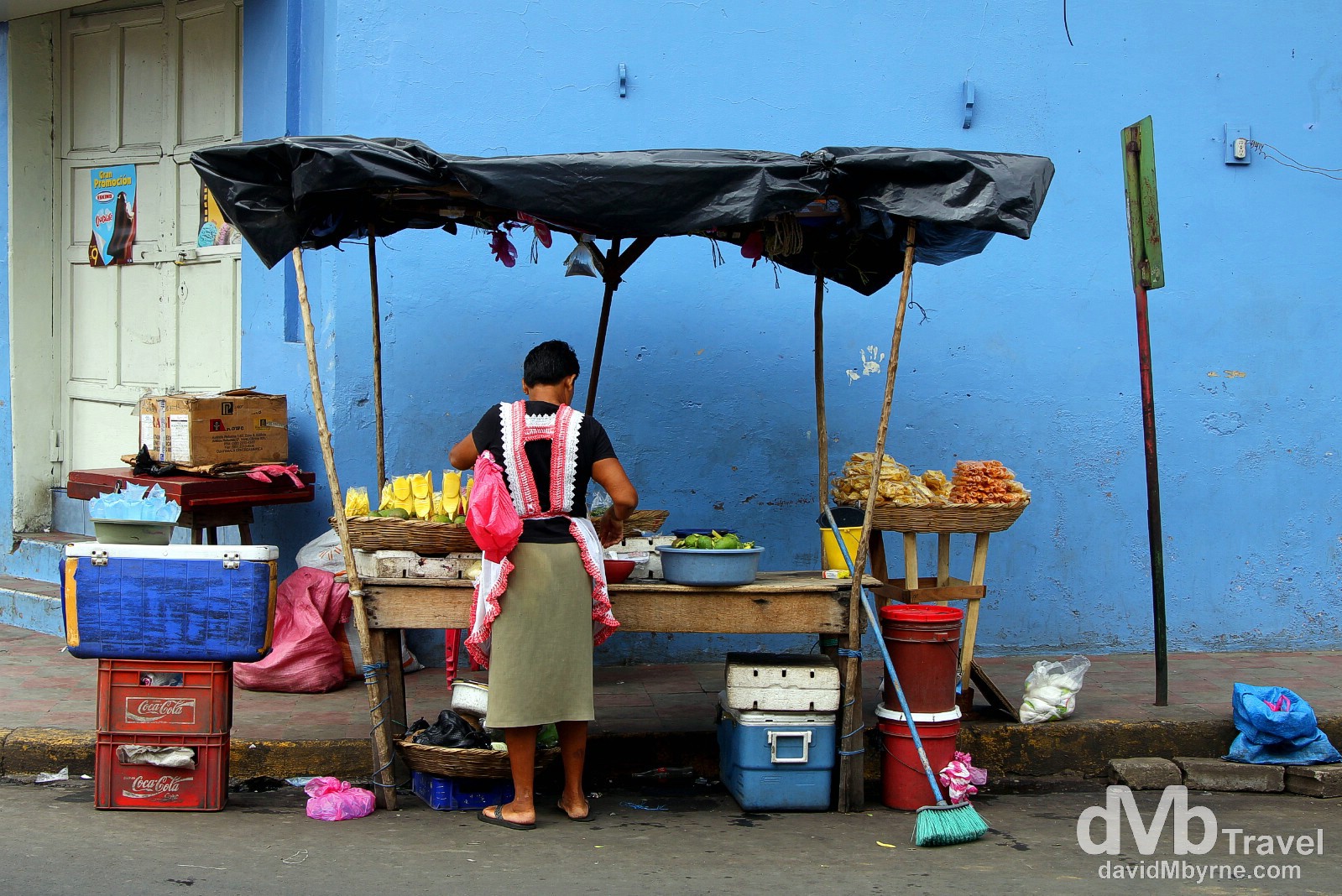 On the colourful streets of Leon, Nicaragua. June 16th 2013. 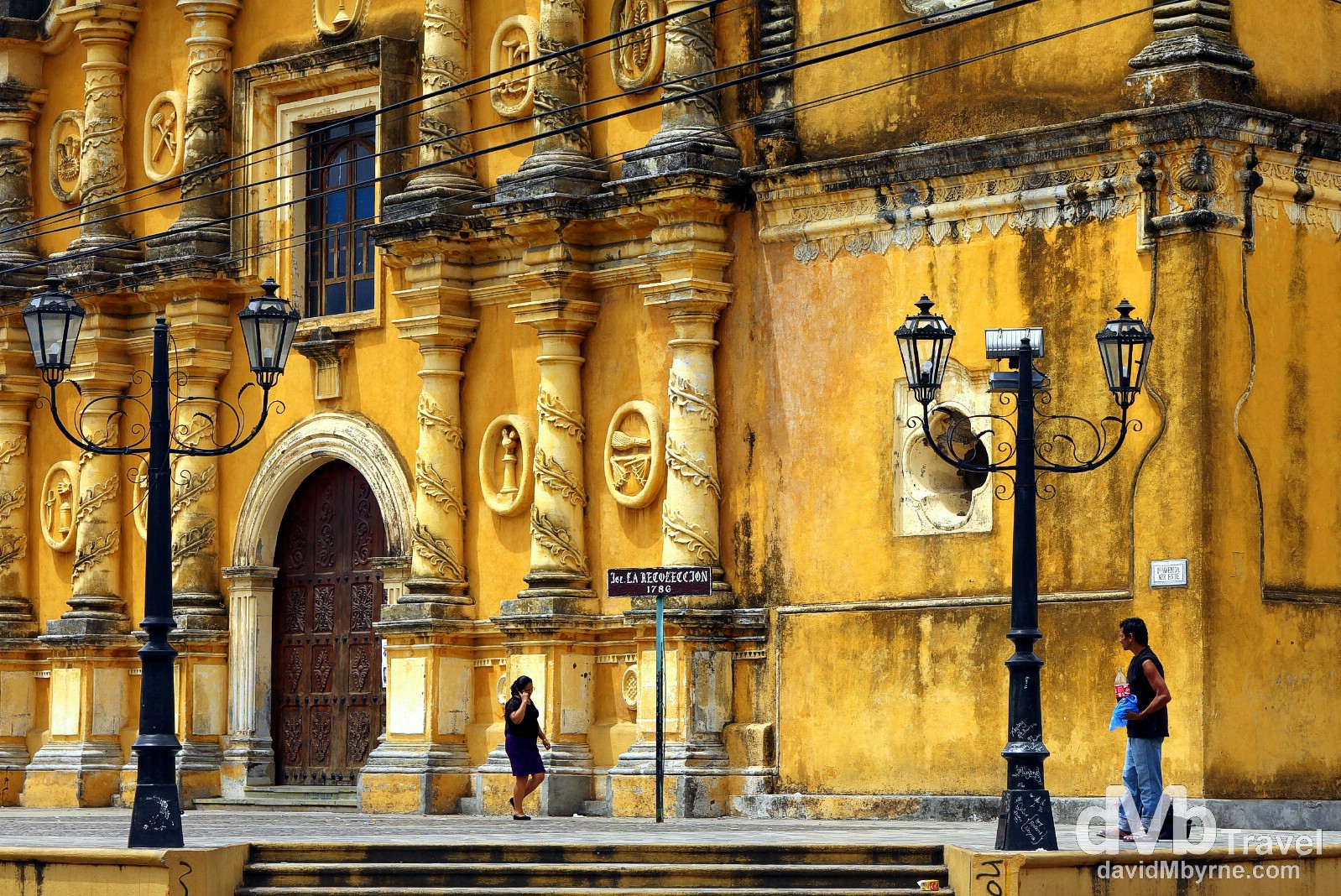 While dominated by it, Leon’s church scene isn’t only about its cathedral. This is the deep yellow façade of what is considered Leon’s most beautiful church, the 1786 Iglesia de la Recoleccion. It’s a Mexican-style baroque confection of swirling columns and bas-relief medallions that portray the life of Christ and it looks great, especially when the sun shines. I paid this church a visit a few times (it was never open) and the guy seen to the right of the frame was always present, day & night. I never could figure out what he was doing there beyond the obvious of talking loudly to himself. Leon, Nicaragua. June 16th 2013.