A Modern Engineering Marvel & Probably The World’s Most Efficient Shortcut

The Panama Canal is an 80 kilometre-long ship canal cutting across the Isthmus of Panama in Panama, Central America. It connects the Atlantic Ocean to the Pacific Ocean & apart from it being a key conduit for international maritime trade, the Panama Canal is also one of modern engineering’s great feats & probably the world’s most efficient albeit expensive shortcut. I’ve been looking forward to visiting the canal for as long as I’ve been in the Central American region and the fact that I did my Central American odyssey going in a north to south direction meant I had to wait until today, my last full day in the region, to do so. But that’s OK because the canal was worth the wait. 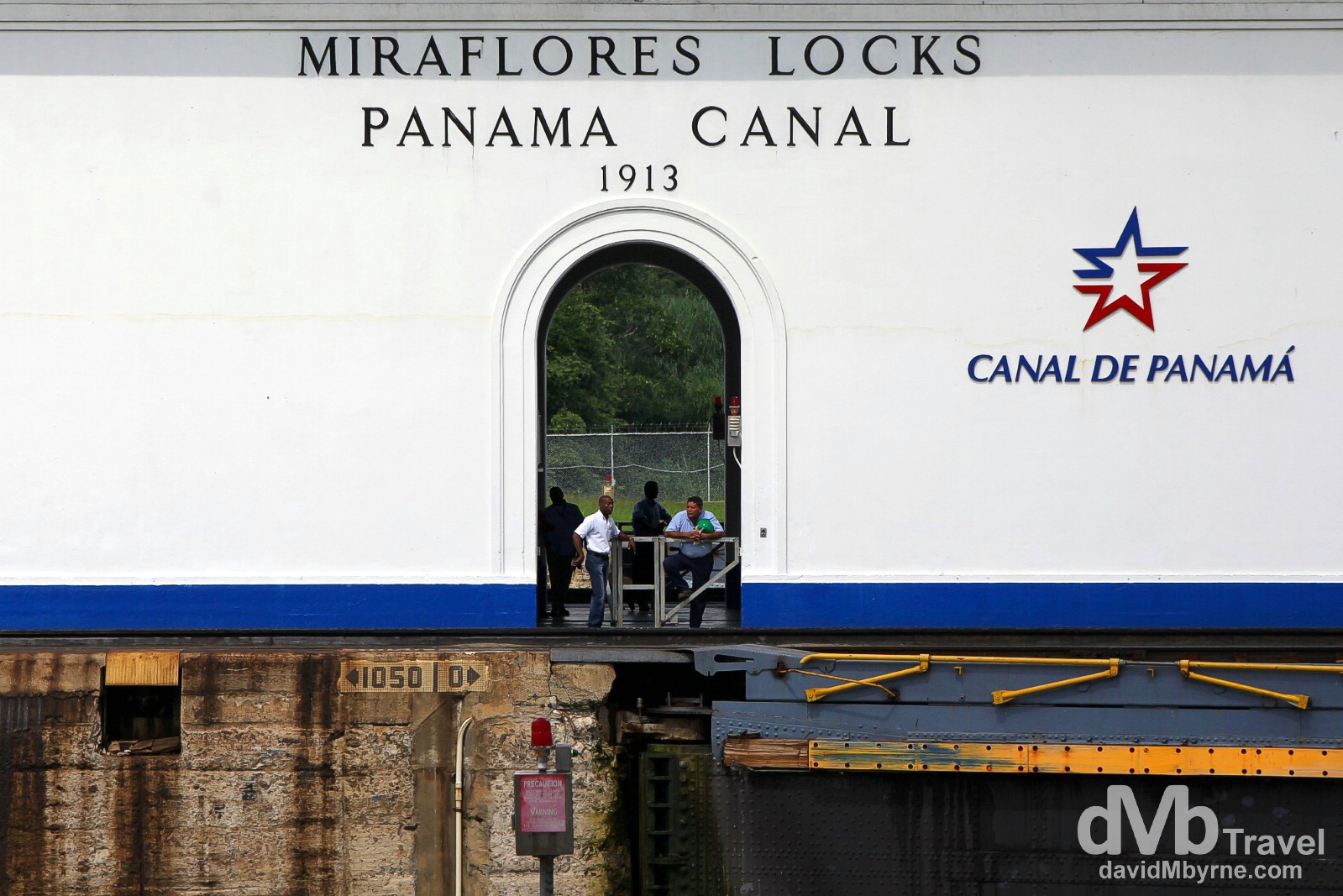 I arrived at the Miraflores Locks – which offers the closest official visitor access to the canal from Panama City, about 12 kilometres away – before the lock’s visitor centre opened. So I took a walk eventually ending up on the banks of the canal about 2 kilometres from where I should have been, outside the then closed door of the aforementioned visitors centre. I was eventually apprehended and escorted back to the centre but not before I got some pictures, including the following picture showing three boats in a sort of (slow) Panama Canal convoy heading for the Miraflores Locks. 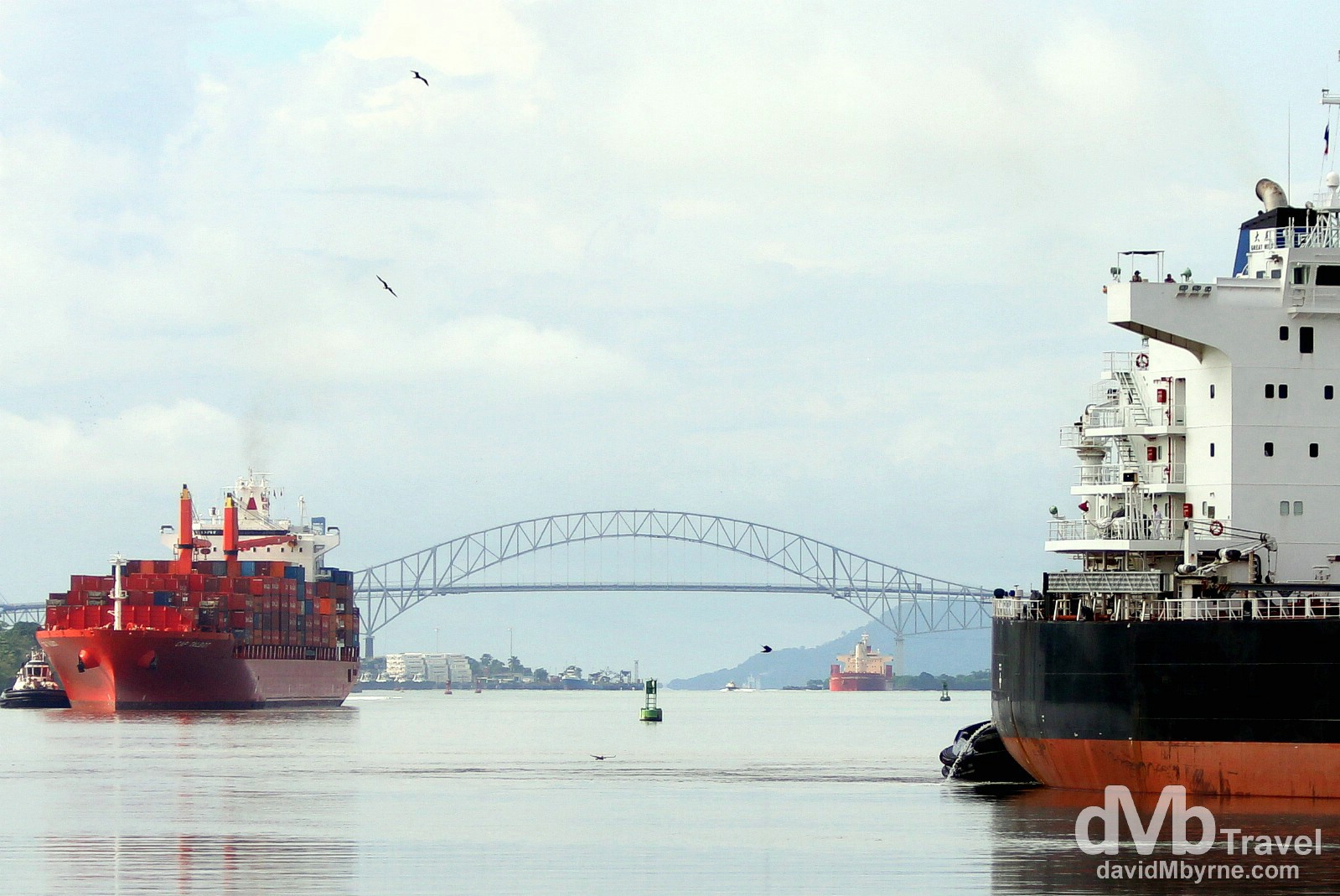 The bridge seen here is the Bridge of the Americas which crosses the Pacific approach to the Panama Canal at Balboa, near Panama City, and connects the north and south American land masses. It was built between 1959 and 1962 by the United States at a cost of 20 million U.S. dollars. This picture was taken at 8:30 a.m. By the time I left the canal at noon the last of the three boats seen here – the small orange tanker in the middle, to the right of the bridge arch – was passing through the lock. I’m glad I got here early in the day because according to the lock officials these were the only 3 big boats to pass through the canal on this day. Some days are busier than others it seems and this was a particularly quiet Panama Canal day. Miraflores Locks of the Panama Canal, Panama. July 1, 2013.

Panama Canal || History
The French were the first to attempt to build the a canal here. They threw their beret at it in 1889 mainly due to construction hardships, hardships which attributed to the deaths of some 22,000 men mostly from yellow fever & malaria. The Americans then seized an opportunity, took up the baton & had the job done in a decade; the first boat passed through the canal on August 15, 1914. The Americans owned & managed the canal right up until December 31, 1999, when control was passed to the Panamanians. Initial fears that the locals couldn’t run the canal as efficiently or as profitable as the Americans have proved ill-founded & today the canal is being expanded, with the US$5 billion expansion project expected to be completed in 2014. This expansion will allow the canal to accommodate vessels of up to 12,000 containers, compared to today’s limit of 4,500 containers. 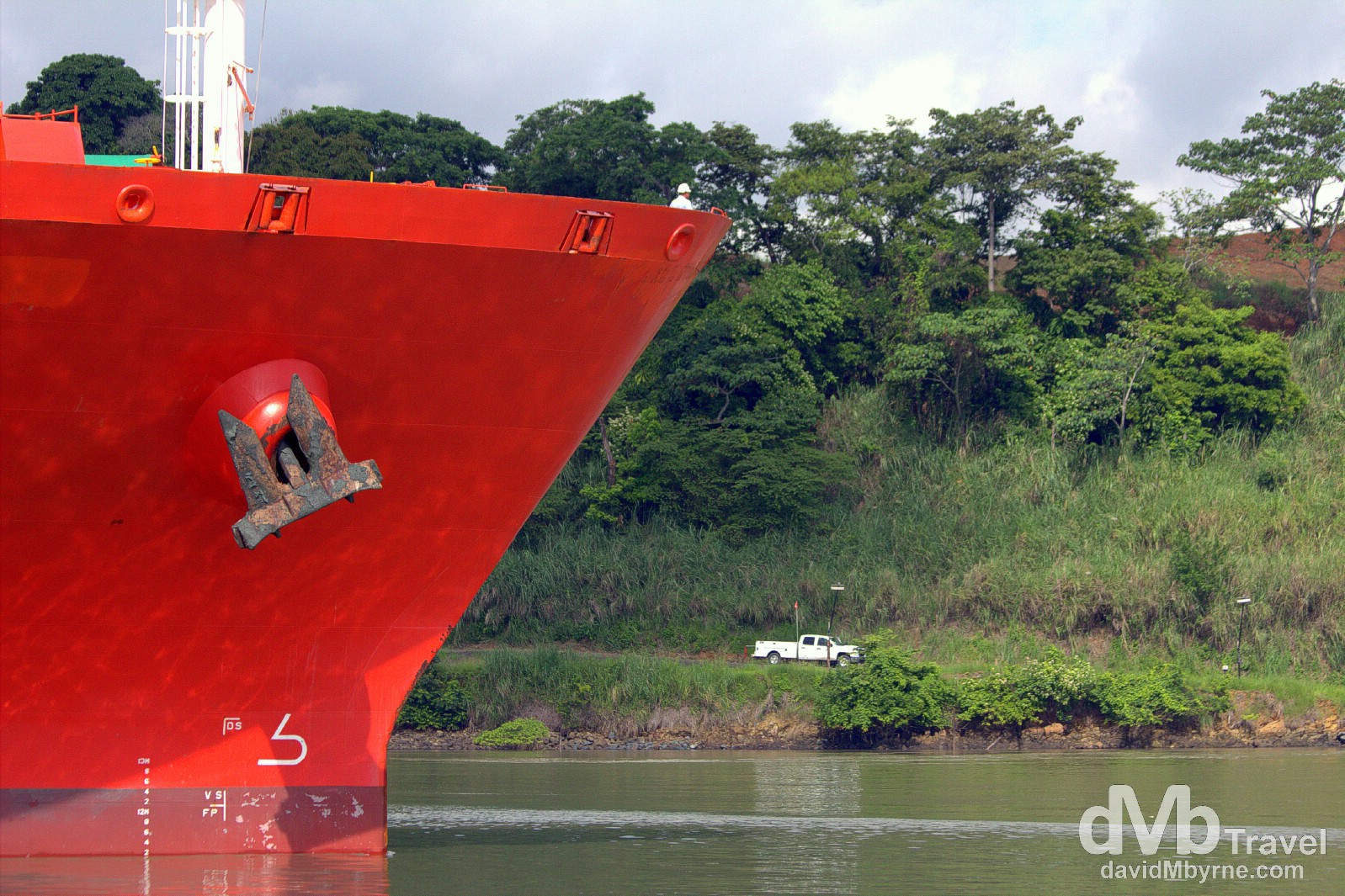 ‘Aye aye Captain, steady as she goes’. A crew member at the bow of a cargo ship on the final approach to the Miraflores Locks of the Panama Canal, Panama. July 1, 2013. 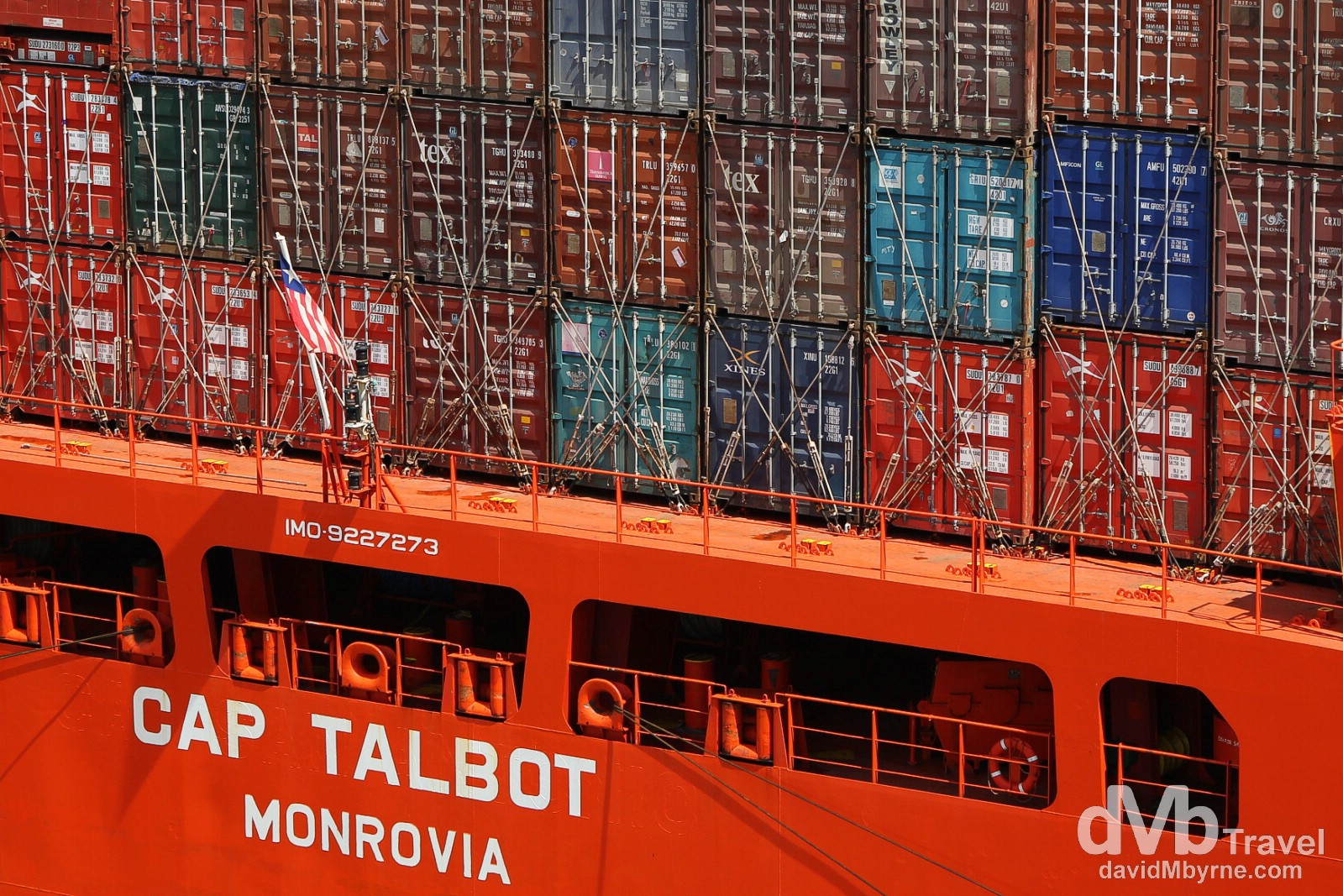 Cargo in the Miraflores Locks of the Panama Canal. One of the worlds great engineering feats, it takes vessels, on average, 10-12 hours to pass through the canal’s 3 sets of locks & to cover the 80 kilometres from the Pacific to the Atlantic (or vice versa), a tad quicker than the 20 days it’d take to sail south around Cape Horn at the tip of South America. But the shortcut isn’t a cheap one: tolls are charged via weight with the average toll for the most common user of the canal – container ships, which account for 24% of canal traffic & attribute 54% of all tolls paid – being between US$300,000-4000,000. What what? You want to sail your cruiser through? Better set aide anywhere from US$30,000 to US$50,000 for that. Oh, & no copper coins please. Miraflores Locks of the Panama Canal, Panama. July 1, 2013 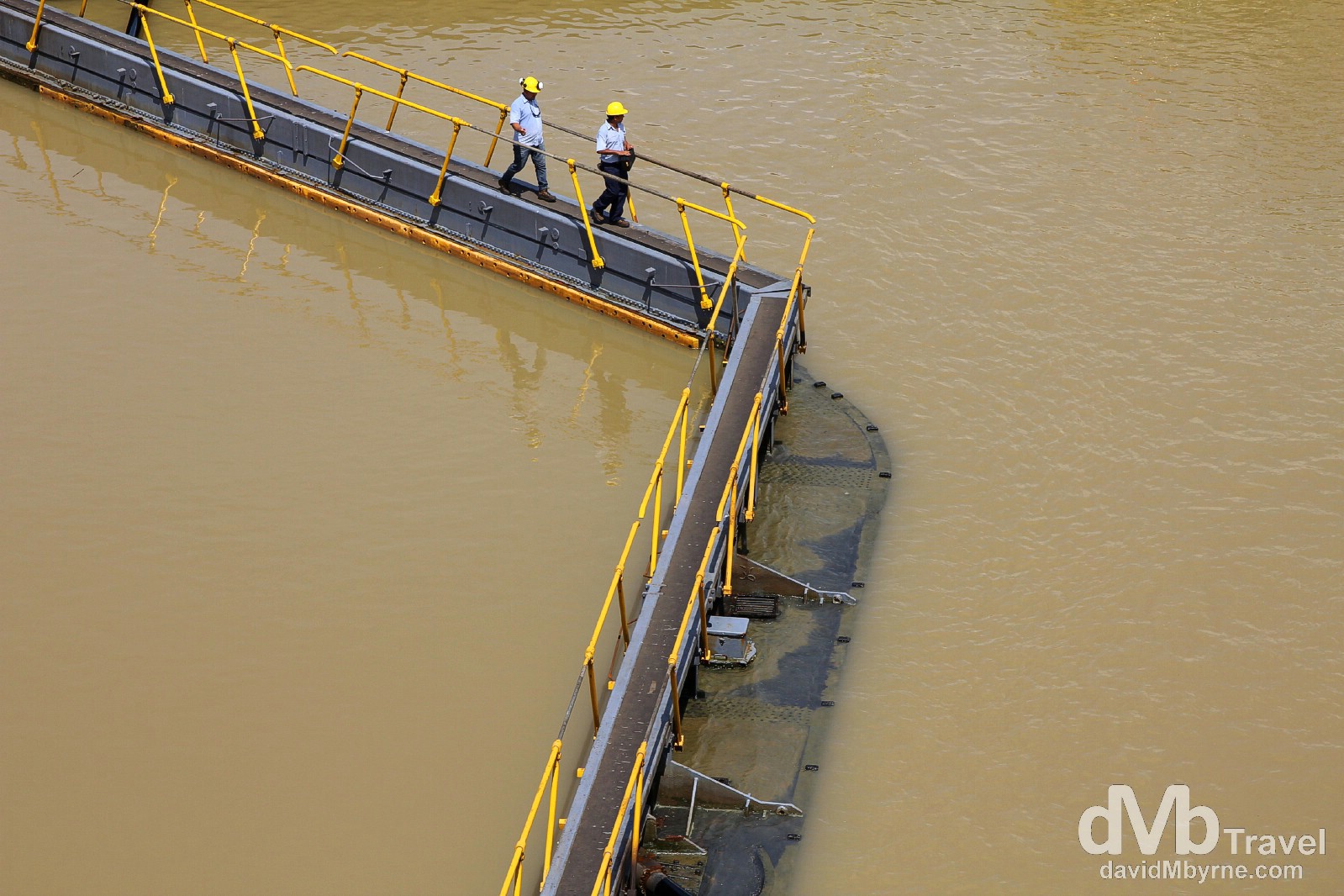 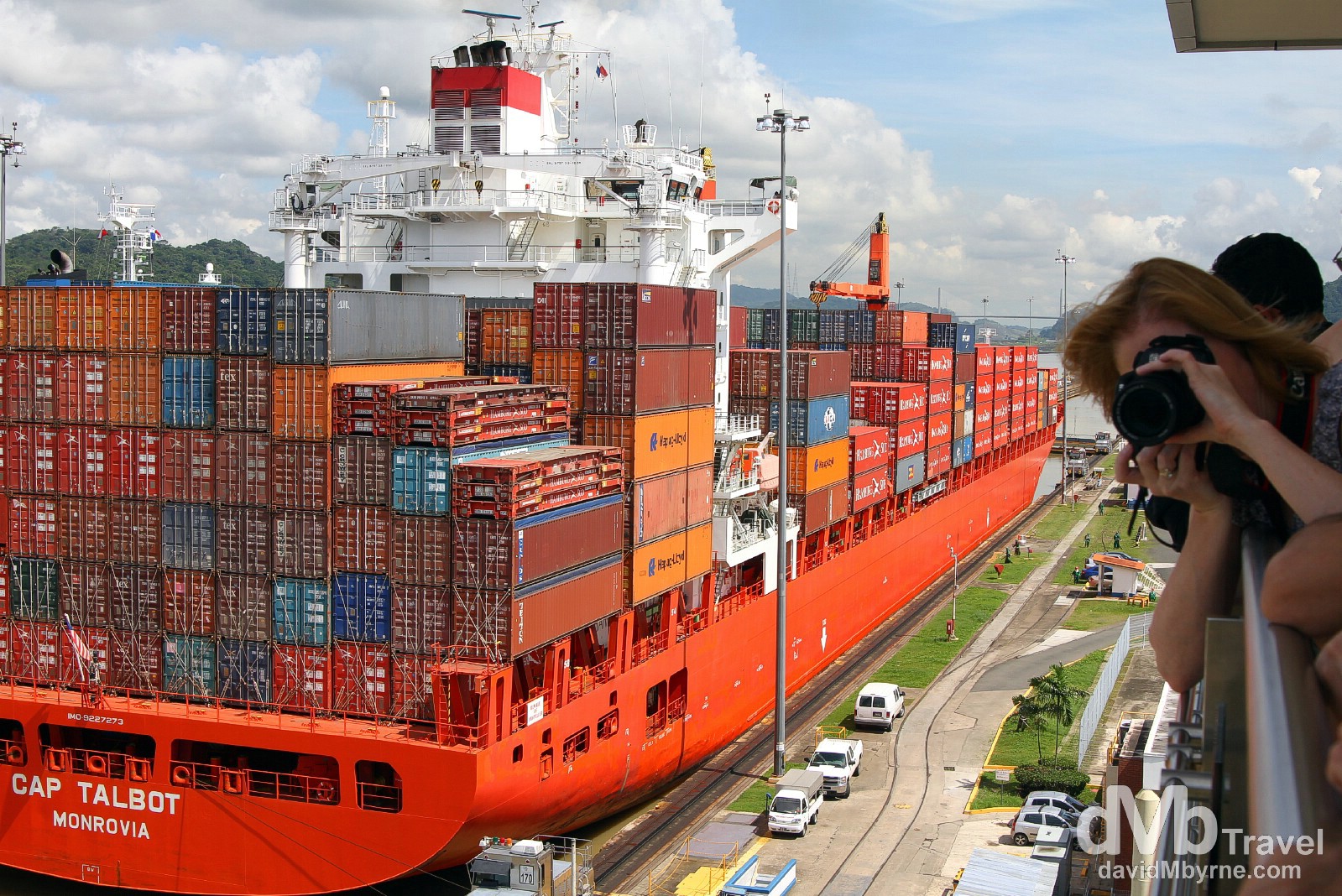 This is the view one is limited to if you don’t venture into any restricted areas of the canal or its surrounds, the view from the 4th floor Observation Deck of the Miraflores Locks Visitor Centre. The centre of course offers ample opportunity to relieve visitors of cash beyond the mandatory entrance fee – shops, restaurants etc. – but it also houses a pretty good & interesting museum (no extra charge) with informative displays about all aspects of the canal right from its conception to the present-day upgrade. Miraflores Locks Visitor Centre, Panama Canal, Panama. July 1, 2013. 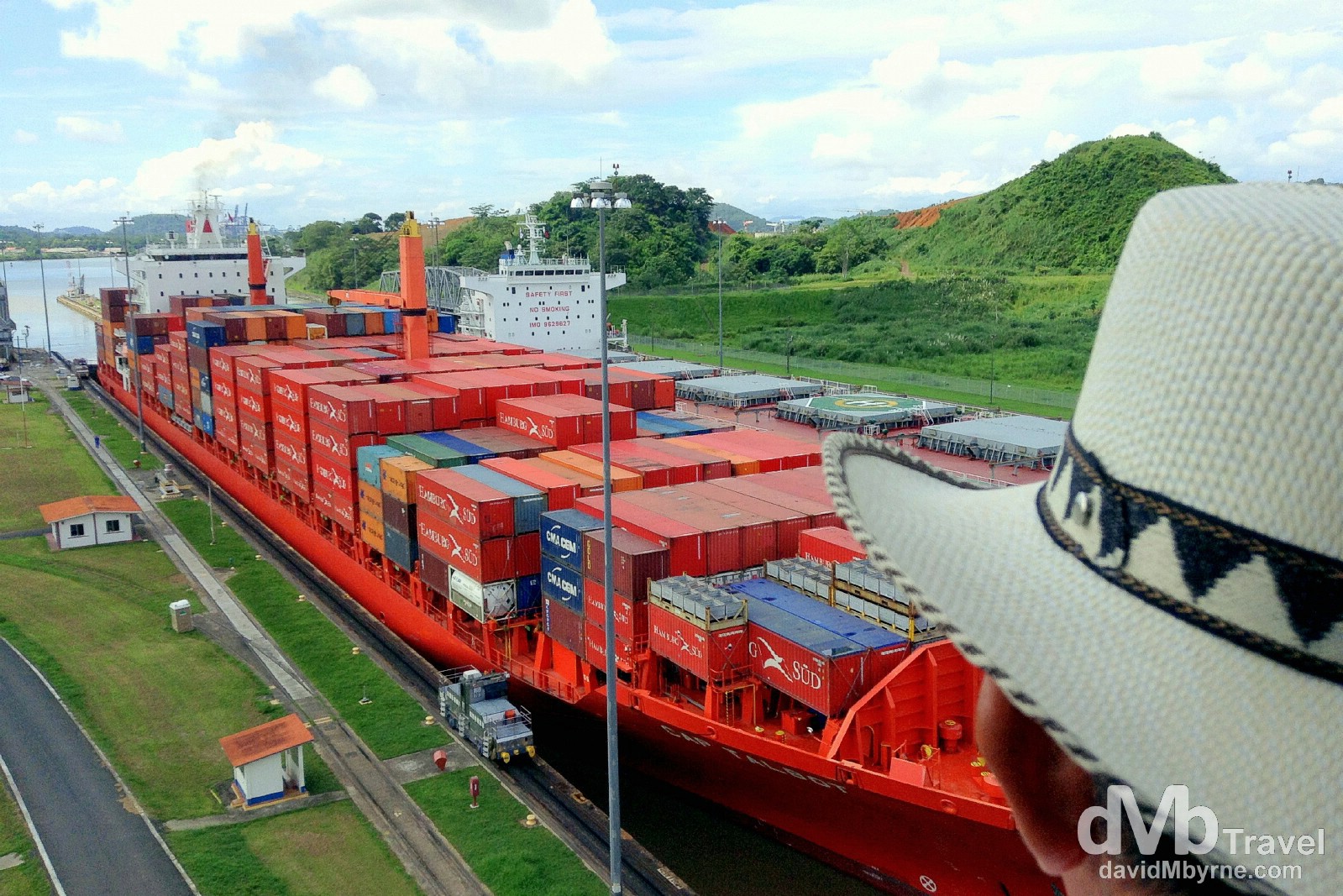 Panama, Hat & Canal. The visitors centre viewing deck can be a busy place and there can be a bit of sharp-elbow & blunt-shoulder jostling to get a good view of the ships entering the lock – it seems, and as one might expect, that the arrival of tour groups at the visitor’s centre coincides with the arrival of (big) ships. Unless you’re OK with getting real close to fellow tourists then photography can be difficult in the scramble. At one stage I resorted to using my smaller iPod which I used to take this picture. I then immediately tweeted it using the free visitor centre Wi-Fi. I then returned to Panama City. Miraflores Locks, Panama Canal, Panama. July 1, 2013 (iPod).