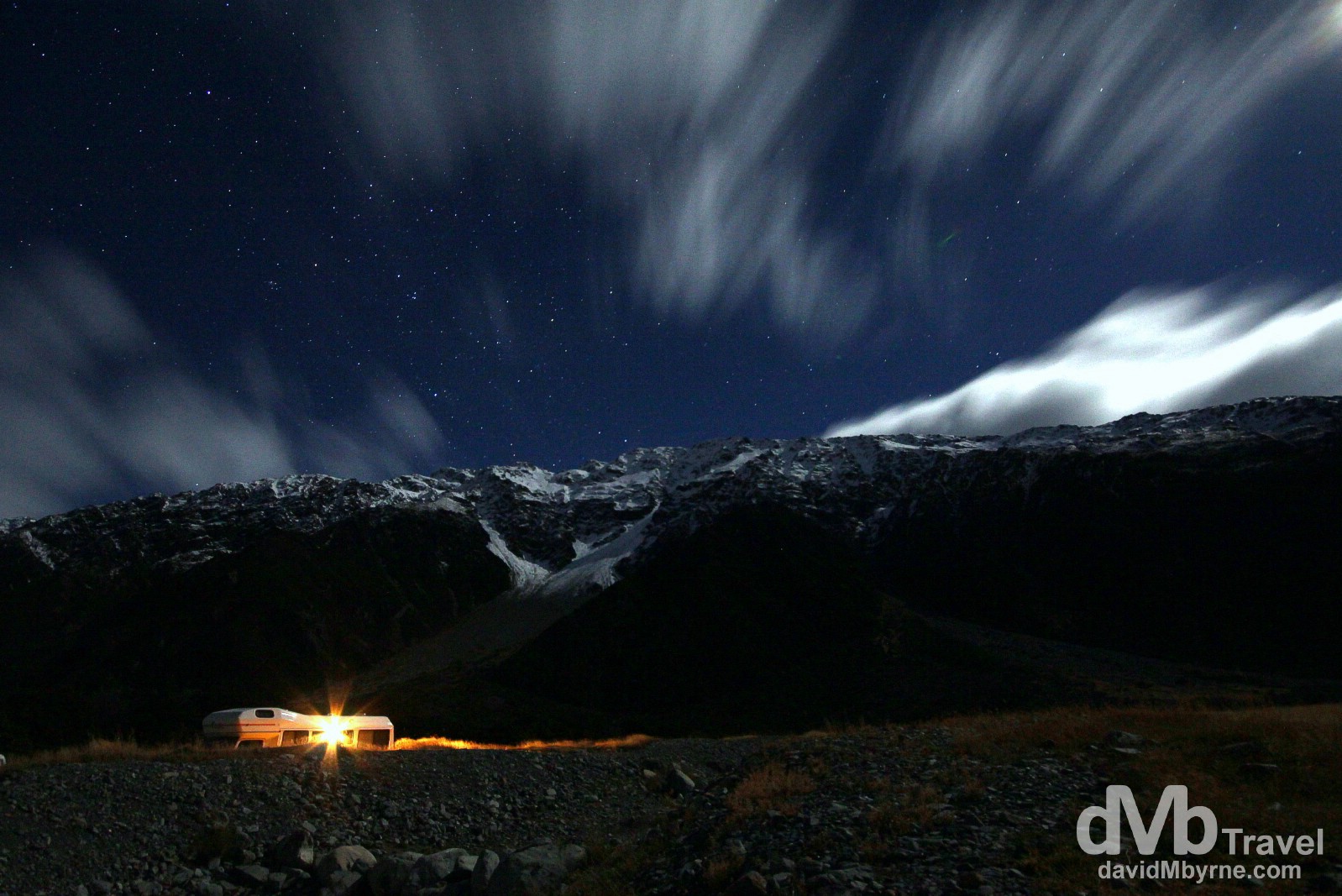 Aoraki/Mount Cook National Park, located in the central part of the New Zealand’s South Island & deep in the heart of the Southern Alps, is New Zealand’s great alpine park, boasting the country’s highest mountains (& quite a lot of them to boot) and its largest glaciers. The 700 km² park is one of four National Parks which are situated in the wider Te Wahipounamu (Maori for “the place of greenstone”), a UNESCO World Heritage listed 26,000 km² region of the south-western corner of New Zealand’s South Island recognised for its outstanding natural values (the other three National Parks in Te Wahipounamu are Fiordland National Park, Mount Aspiring National Park, & Westland Tai Poutini National Park). The park’s highlight, if you’ll pardon the pun, is Mount Cook itself, the highest peak in Australasia. The park, full of great walks, clean air, towering peaks & glaciers, is a truly magical part of the world & the time I have just spent surrounded by all that magic has, of course, proved to be a highlight of my time in the country. And not once, but twice now. 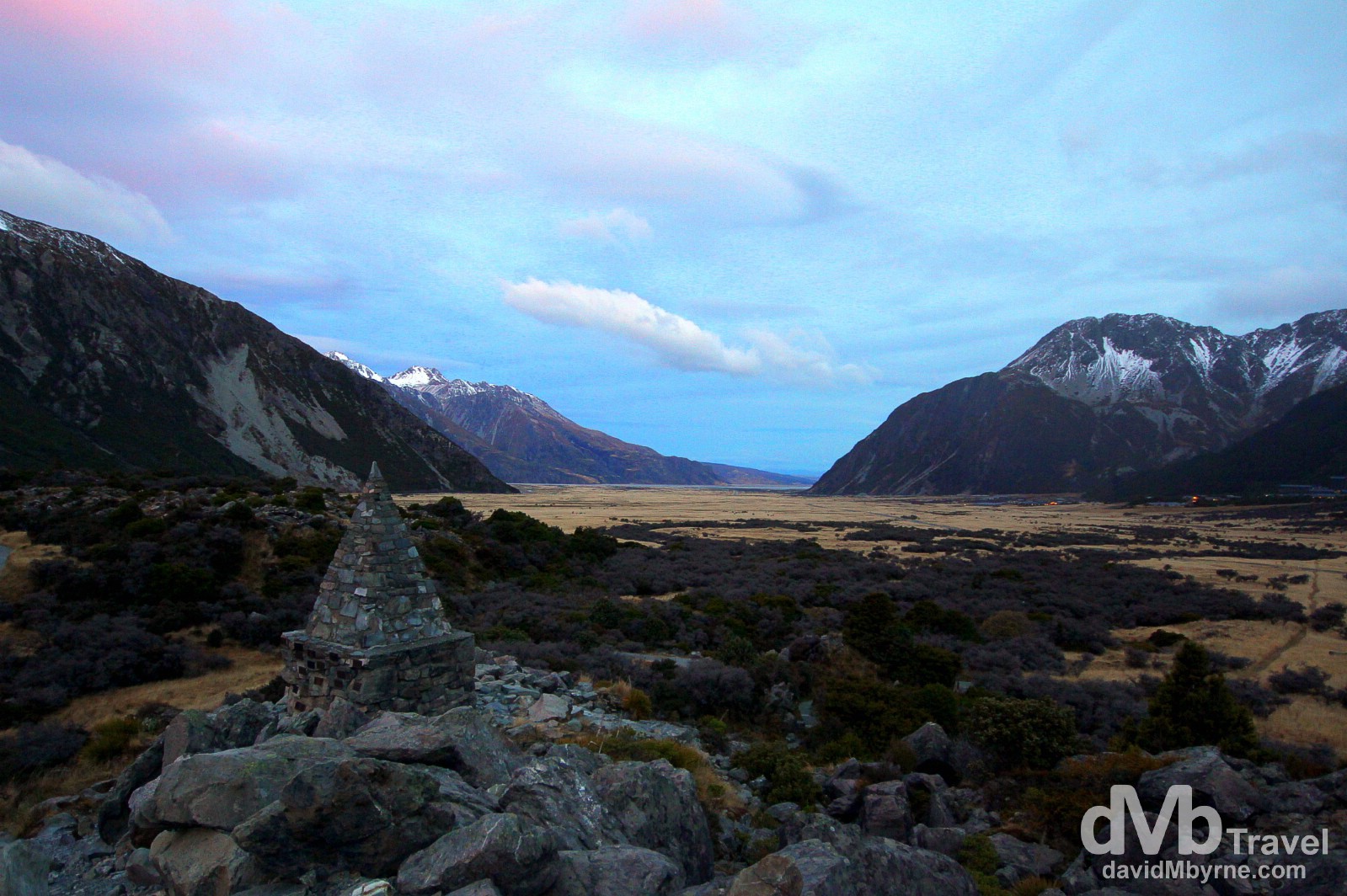 A late evening image of the landscape surrounding Mount Cook Village (right in the far distance) as seen from the start of the Hooker Valley, Mount Cook National Park (

A camper van in the White Horse Hill Camp Ground of Mount Cook National Park. The White Horse Hill Camp Ground sits about a 2 hour walk from the glacier lake at the foot of Mount Cook & in the shadow of some of the other impressive National Park peaks – 22 of the 27 highest peaks in the country are to be found in this area. This 30-second exposure image was captured once the sun went down on the evening I arrived in the park at the end of a long drive from Dunedin. I spent quite a while outside my camper van capturing extended exposure shots of the moonlight surrounds. Mount Cook national Park, South Island, New Zealand. May 30th 2012

Hooker Valley Walk
Most guidebooks on New Zealand list a tramp (as in to travel on foot, as opposed to a disreputable vagrant or a person who engages freely in promiscuous sex) in the shadows of Mount Cook as a highlight of any visit to the country. They are not wrong. It was a highlight of my previous, 2003 visit to New Zealand and I’m glad to say that familiarity did nothing to diminish the experience this time around; one feels so small when dwarfed by the immensity of the landscape that surrounds them. 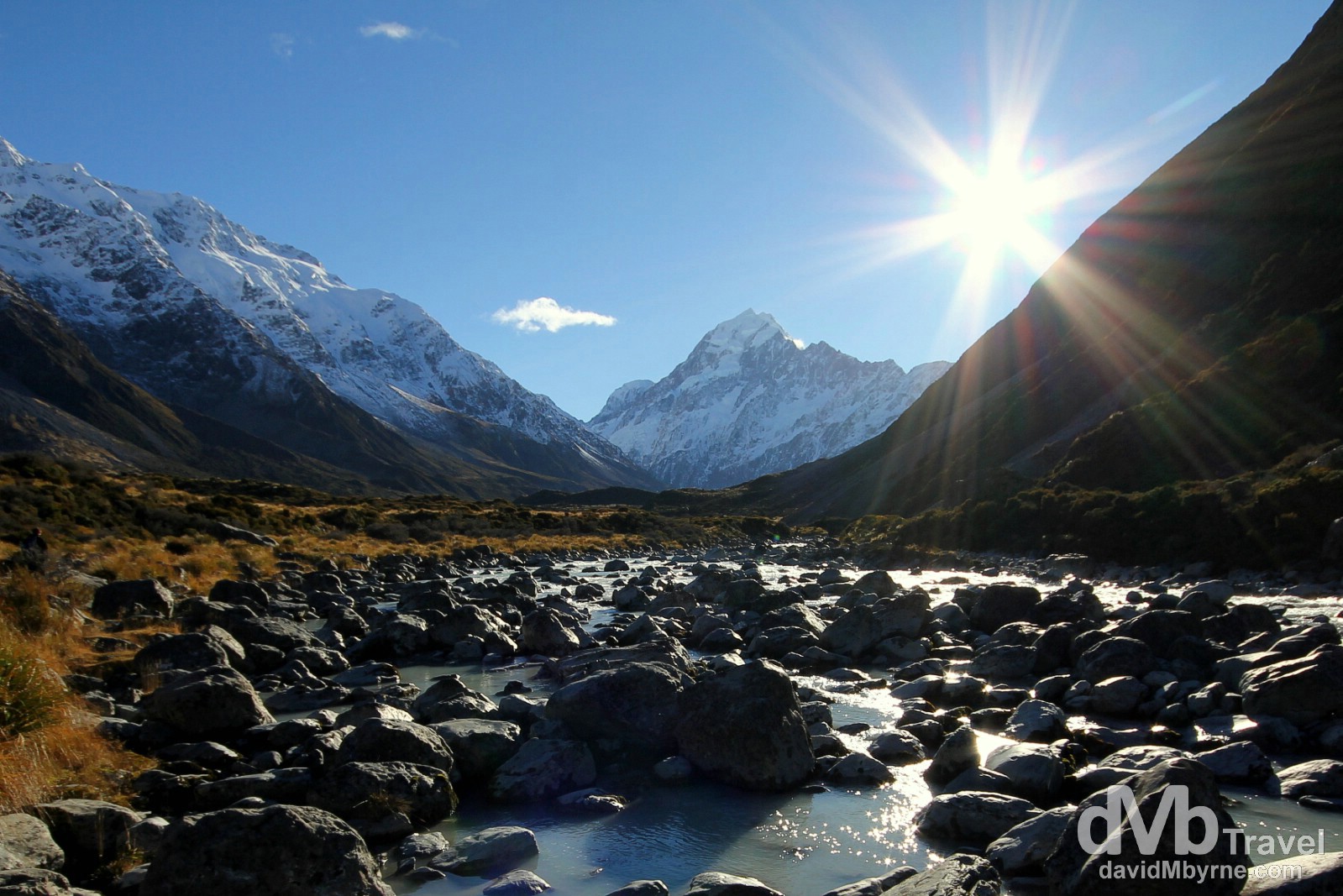 Mount Cook as seen from the Hooker Valley in Mount Cook National Park. The Hooker Valley is a valley leading from the White Horse Hill Camp Ground to the Hooker Lake, the glacier lake at the foot of Mount Cook. The (at most) 2-hour walk up the valley (4 hours return) affords magnificent views of the peak – it’s a wonderful sight, especially on a clear day, something I’ve been lucky enough to be treated to twice now. Mount Cook National Park, South Island, New Zealand. May 31st 2012. 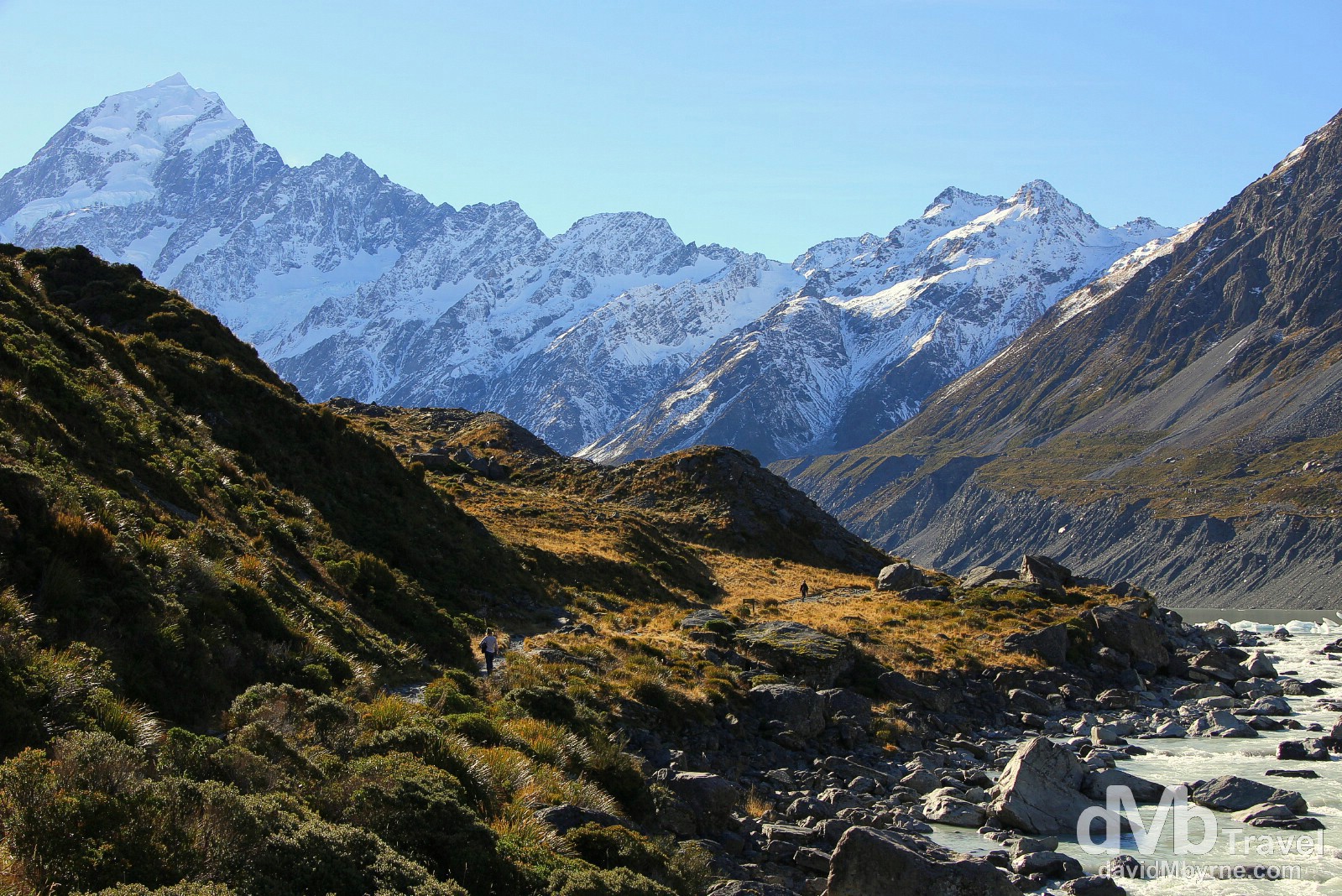 Approaching the Hooker Lake (seen to the right) at the base of Mount Cook near the end of the Hooker Valley walk, Mount Cook National Park, South Island, New Zealand. May 31st 2012.

Summitting Mount Cook
The first recorded summit attempt of Mount Cook was a failed 62-hour ascent in 1882 by, rather bizarrely, an Irish priest & 2 Swiss climbers. It was first conquered only two years later, on Christmas Day 1884, by a trio of local climbers. The first female ascent was in 1913. In 1948 Edmund Hillary, the most famous Kiwi of them all, stood on the summit with Tenzing Norgay – 5 years later, on May 29th, 1953, they’d be the first to summit Mount Everest. At 3,755 metres (12,319 ft) it’s not a particularly high peak, certainly not when compared to the 8,000+ metre peaks of the Himalayas, but it is still a difficult, hazardous climb, one that has claimed many lives. 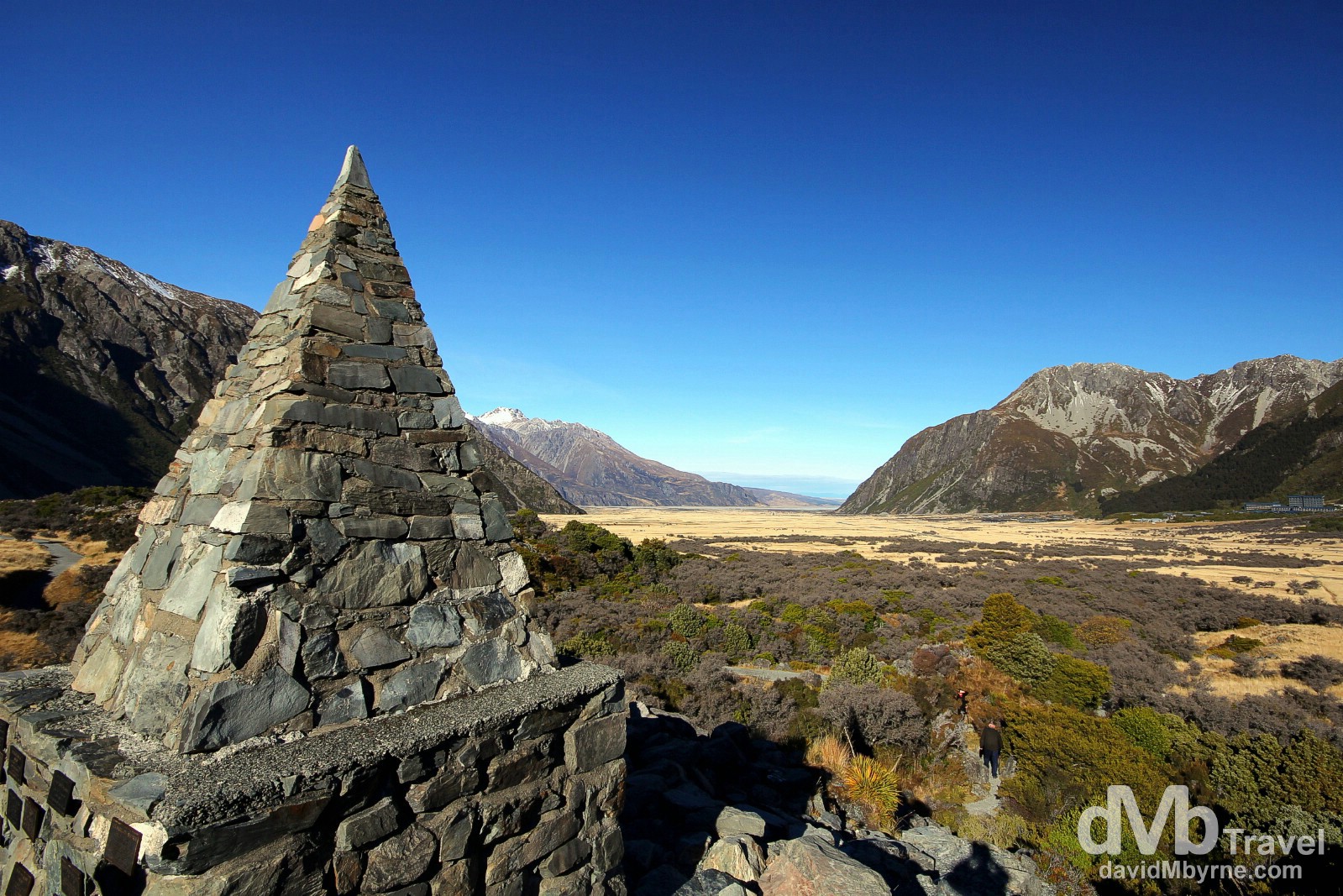 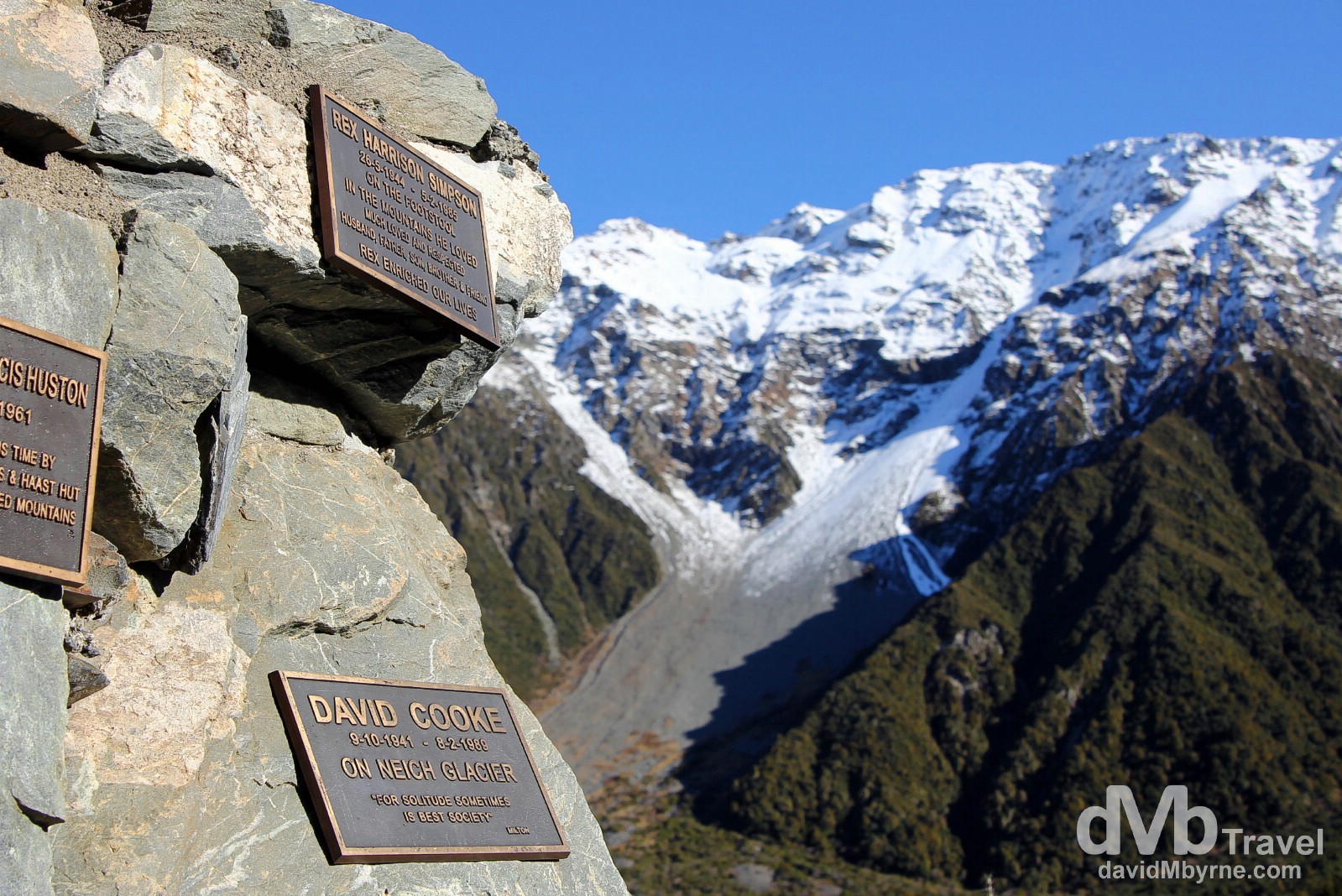 Plaques on the Alpine Monument at the entrance to the Hooker Valley. It’s a sombre experience reading the inscriptions on the plaques while surrounded by the peaks that claimed the lives. Mount Cook National Park, South Island, New Zealand. May 31st 2012.