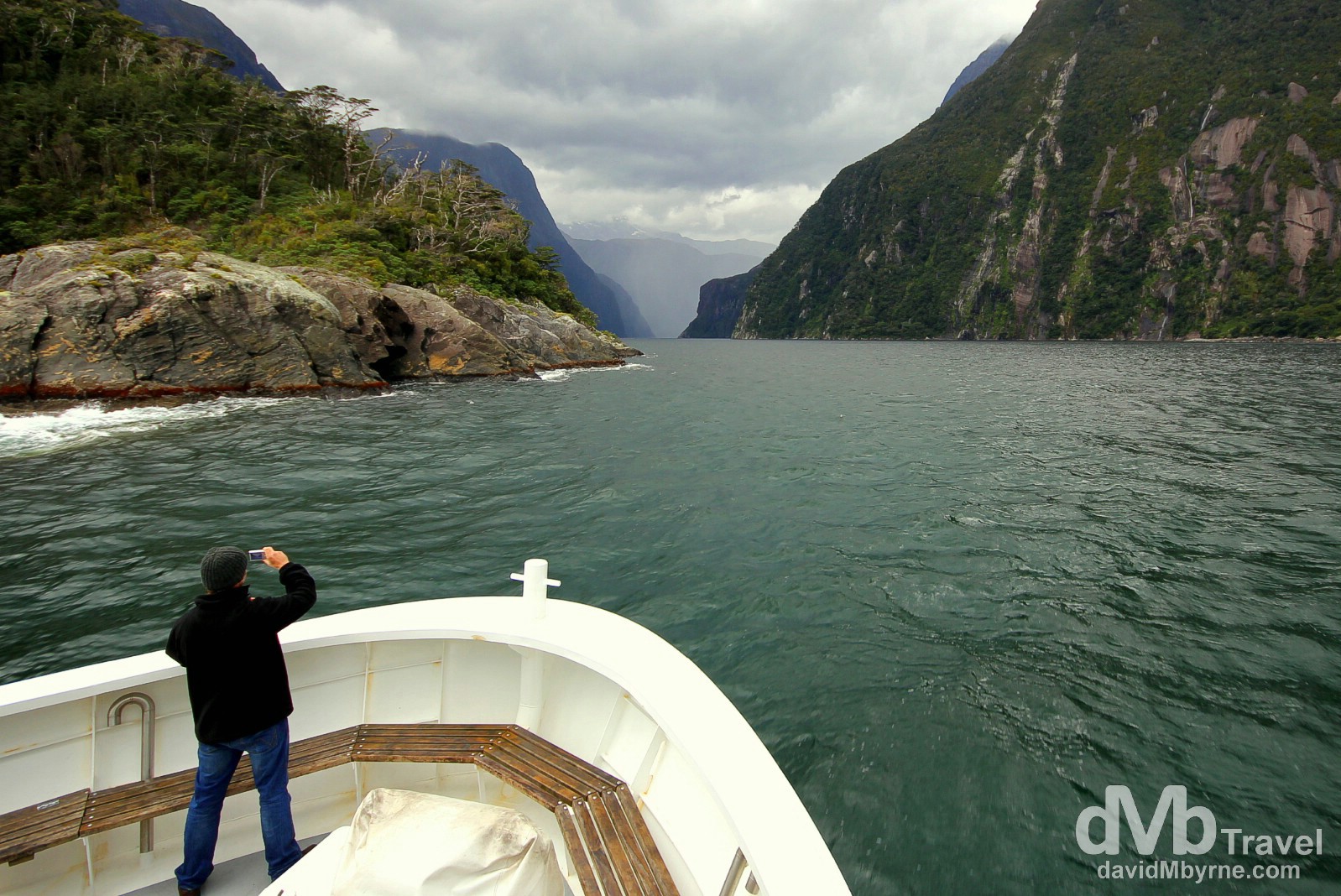 Fiordland National Park is located in the south-west of New Zealand’s South Island. The 12,500 km² park is the largest of New Zealand’s 14 National Parks & one of four that are situated in the wider Te Wahipounamu (Maori for “the place of greenstone”), a UNESCO World Heritage listed 26,000 km² region recognised for its outstanding natural values (the other three National Parks in Te Wahipounamu are Westland Tai Poutini National Park, Mount Cook National Park & Mount Aspiring National Park). Over one million people visit Fiordland every year with the vast majority of them doing so to visit Milford Sound, acclaimed as New Zealand’s most famous tourist destination. Needless to say world-renowned Milford Sound (TripAdvisor judged it the world’s top travel destination in a 2008 survey) is stunning & a cruise through the 15 kilometre fiord is rightly the highlight of a visit to this wet, remote corner of the country for most. However, one of the most incredible and frequently overlooked features of Milford Sound is not the fiord itself but the journey to get there. 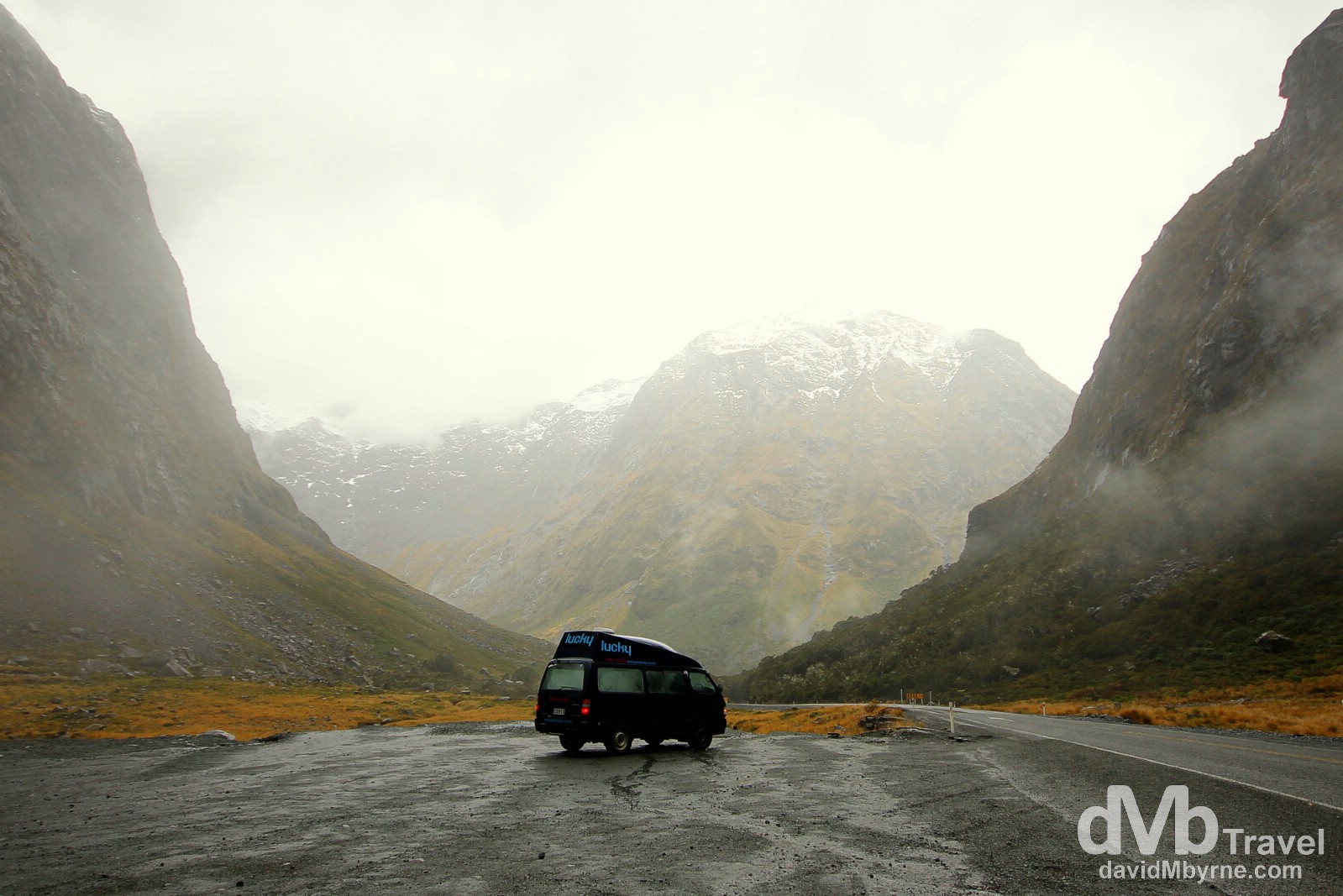 Wilma, my camper van, parked outside the eastern portal of the Homer Tunnel on State Highway 94, Fiordland, South Island, New Zealand. May 26th 2012.

The 119 kilometre stretch of State Highway 94 from Te Anu through Fiordland National Park to Milford Sound is one of the highest – it’s 945 metres above sea level at its highest point, the Homer Saddle at the eastern portal of the Homer Tunnel – and most scenic state highways in New Zealand. Climbing through the Southern Alps, the alpine highway is also one of the country’s most dangerous roads, especially during winter (May to September) when avalanches are a threat – avalanche season is June through November, when large portions of the road are marked no-stop zones. The road passes through unspoiled mountain landscapes and rainforest carpeted valleys & on a clear day the combination of the drive, the many stops along the way and the final destination of Milford Sound makes for quite a compelling day of sightseeing. It’s not quite as enjoyable on a dull, overcast and wet day, just the kind of day I was treated to today, but nonetheless it is still an amazing day out. 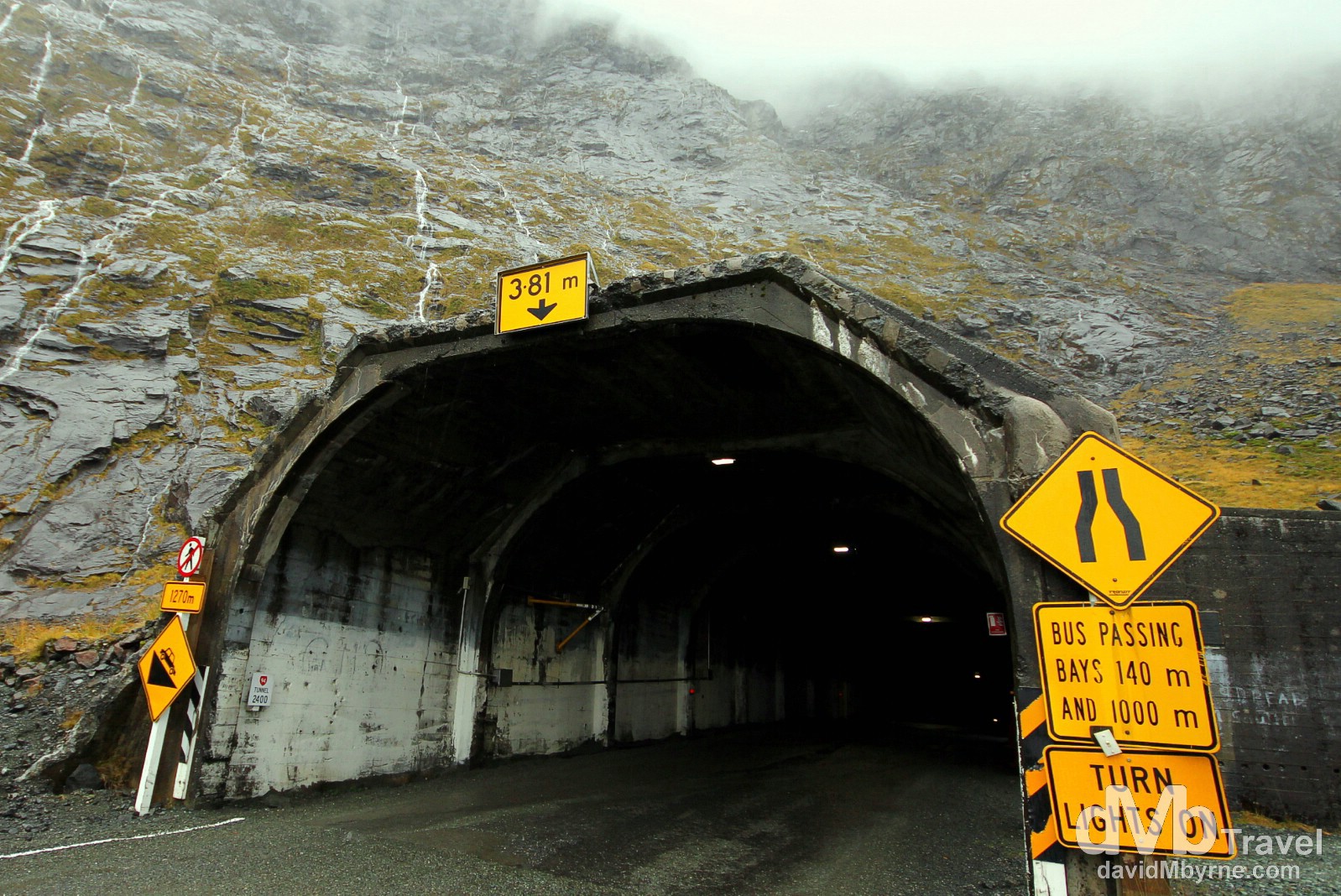 The eastern portal of the Homer Tunnel through the Darran Mountain range is, at 945 metres in elevation, the highest point on State Highway 94 in Fiordland. Since 1953 the 1.3 kilometre tunnel has made possible the trip by car to Milford Sound, the only one of the many Fiordland fiords accessible by road – until the tunnel was completed the only access to Milford Sound was on foot via the Milford Track or by steamer along the south-west coast. Tourism provided the motivation to build the tunnel but it was the Depression of the 1930s that provided the means. In the winter of 1935, eight men armed with nothing more than pick axes, shovels & wheelbarrows began clearing rock debris from the base of the Darran range at the so-called Homer Saddle. By summer they had reached solid rock. Machinery was brought in, engineering workshops were constructed & soon hundreds of men were working around the clock. Work ceased during World War II & it wasn’t until 1953 that the job was completed & the road opened. Apart from slight alterations to widen & seal the surface (it was originally a dirt road, making it the longest dirt road tunnel in the world) the tunnel is today as it was when it opened. State Highway 94, Fiordland, South Island, New Zealand. May 26th 2012. 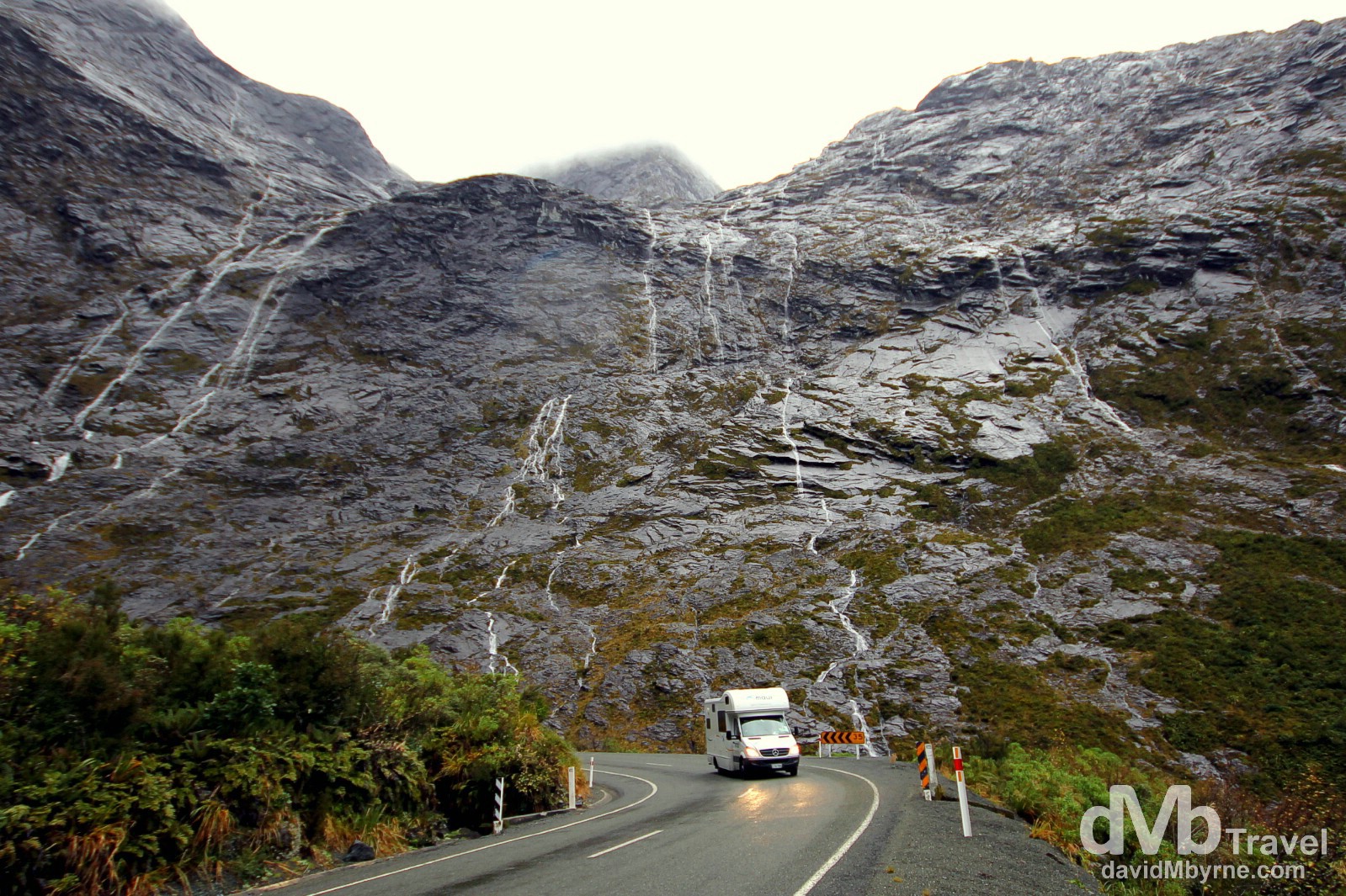 A camper van exiting the western portal of the Homer Tunnel into the Cleddau Valley on State Highway 94 en route to Milford Sound. This is some 103 kilometres into the 119 kilometre, 2 hour drive (without stops) from Te Anu & from here is the road descends 16 kilometres (it’s all downhill), terminating at Milford Sound. Mini waterfalls can be seen streaming down the sheer rock faces that abound here, a result of rain that’s never too far away. State Highway 94, Fiordland, South Island, New Zealand. May 26th 2012. 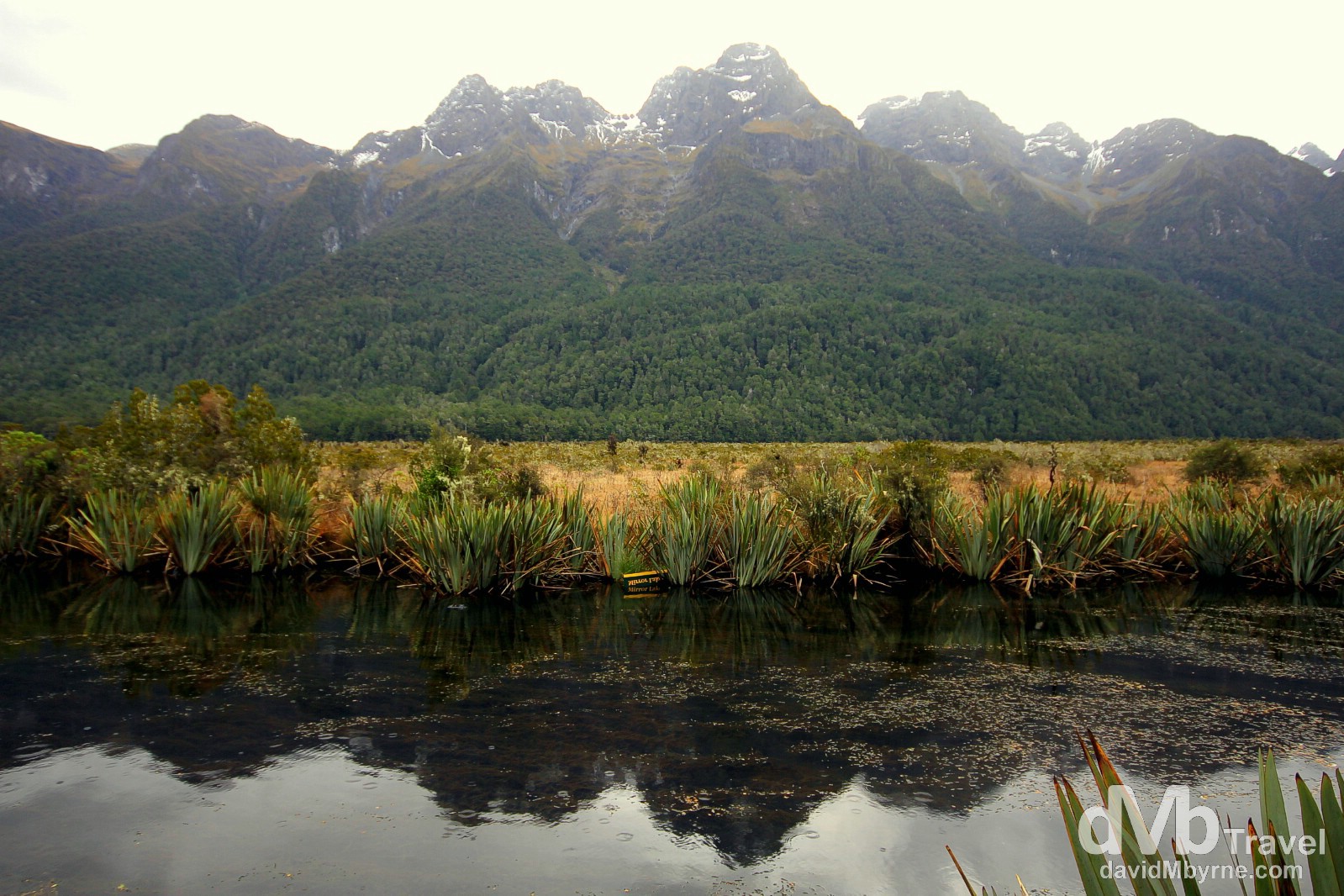 The eight Wonder of the World

Worn down during the cooler past when massive glaciers carved many deep fiords in the area, fiords that then flooded when the glaciers melted, Milford Sound is Fiordland National Park’s most famous & most visited fiord largely because it’s the only one of the parks many fiords accessible by road – other notable fiords include Doubtful Sound and Dusky Sound. 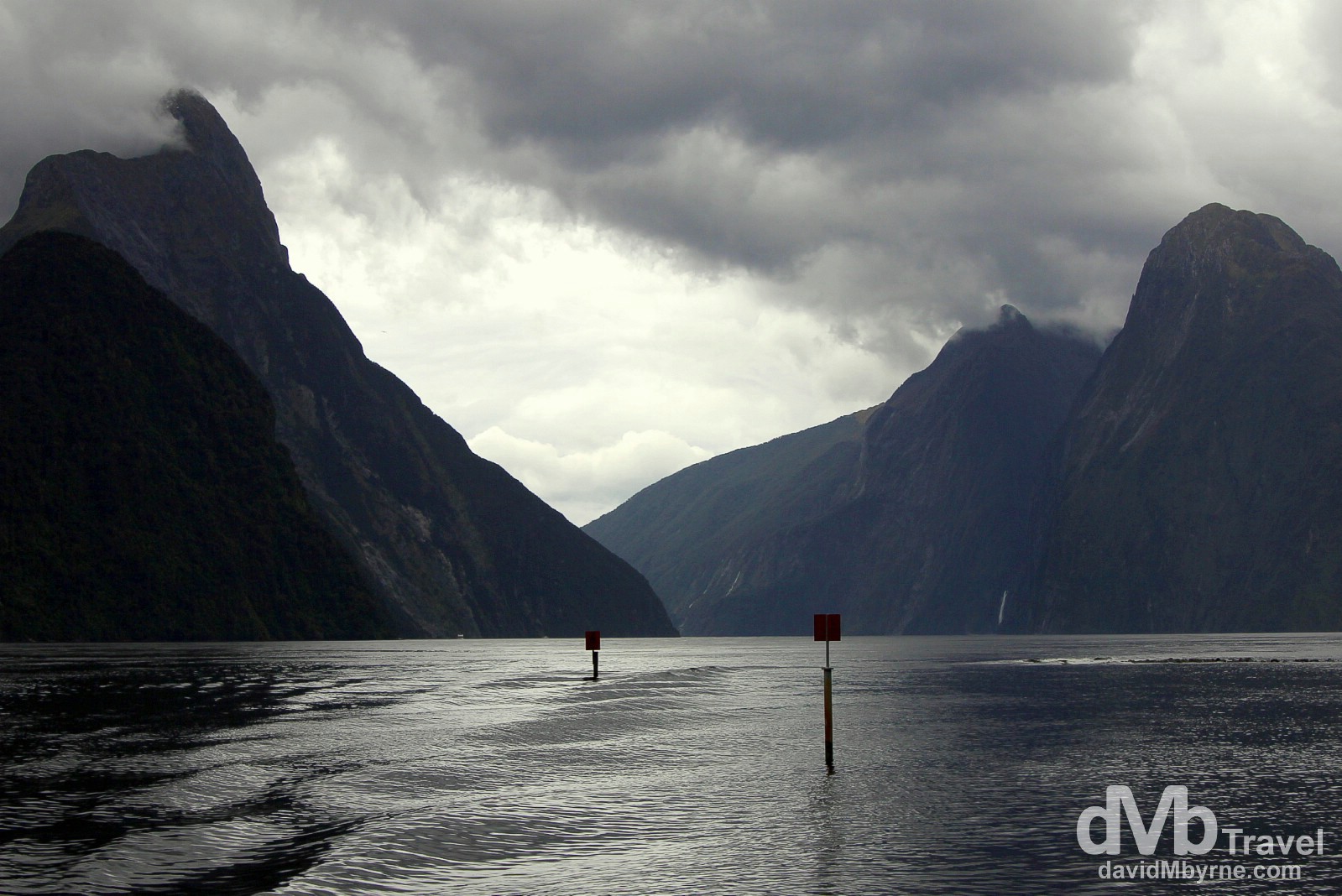 Cloud hovers over the peaks of Milford Sound, including the fiords most famous peak Mitre Peak (left), on a wet, overcast day (a terrible day for photography, which is my excuse for this shot). The must-do activity in Milford Sound is a 15 kilometre cruise (30 kilometre round-trip) to the mouth of the fiord at the Tasman Sea, a trip that can be done with any one of numerous cruise providers & in varying levels of comfort. The cruise, which with a no-frills provider will run to about 90 minutes, passes by the sheer, steep-sided rock faces that line the fiord, rock faces dotted with waterfalls. Milford sports two permanent, year-round waterfalls – Lady Bowen Falls and Stirling Falls – but also many, many temporary falls after heavy rain. And chances of seeing a waterfall bonanza are good – with nearly 200 days of rain a year, Milford Sound is known as the wettest inhabited place in New Zealand and indeed one of the wettest places in the world. Milford Sound, Fiordland, South Island, New Zealand. May 26th 2012.

Entering Milford Sound from the Tasman Sea. This picture was taken as my cruise ship exited the mouth of Milford Sound into the Tasman Sea, turned 180 degrees and readied itself to renter the fiord to return to base 15 kilometres away. This is something early explorers didn’t do. Milford Sound was initially overlooked by European explorers because from this position its narrow entry did not appear to lead into a large, anchorable bay. Sailing ship captains, including one Captain Cook, bypassed Milford Sound for this very reason, but also because of fears that venturing too close to the steep mountain sides, coupled with strong winds, would prevent escape – this refers to Fiordland’s Doubtful Sound, so named by Cook as he thought it ‘doubtful’ he would escape if he sailed in. As such Fiordland remained one of the least-explored areas of New Zealand right up until the 20th century. But it wasn’t long thereafter that Milford Sound’s natural beauty in particular started to attract national and international renown, eventually turning it into what is today New Zealand’s most famous tourist destination. Milford Sound, Fiordland, South Island, New Zealand. May 26th 2012.