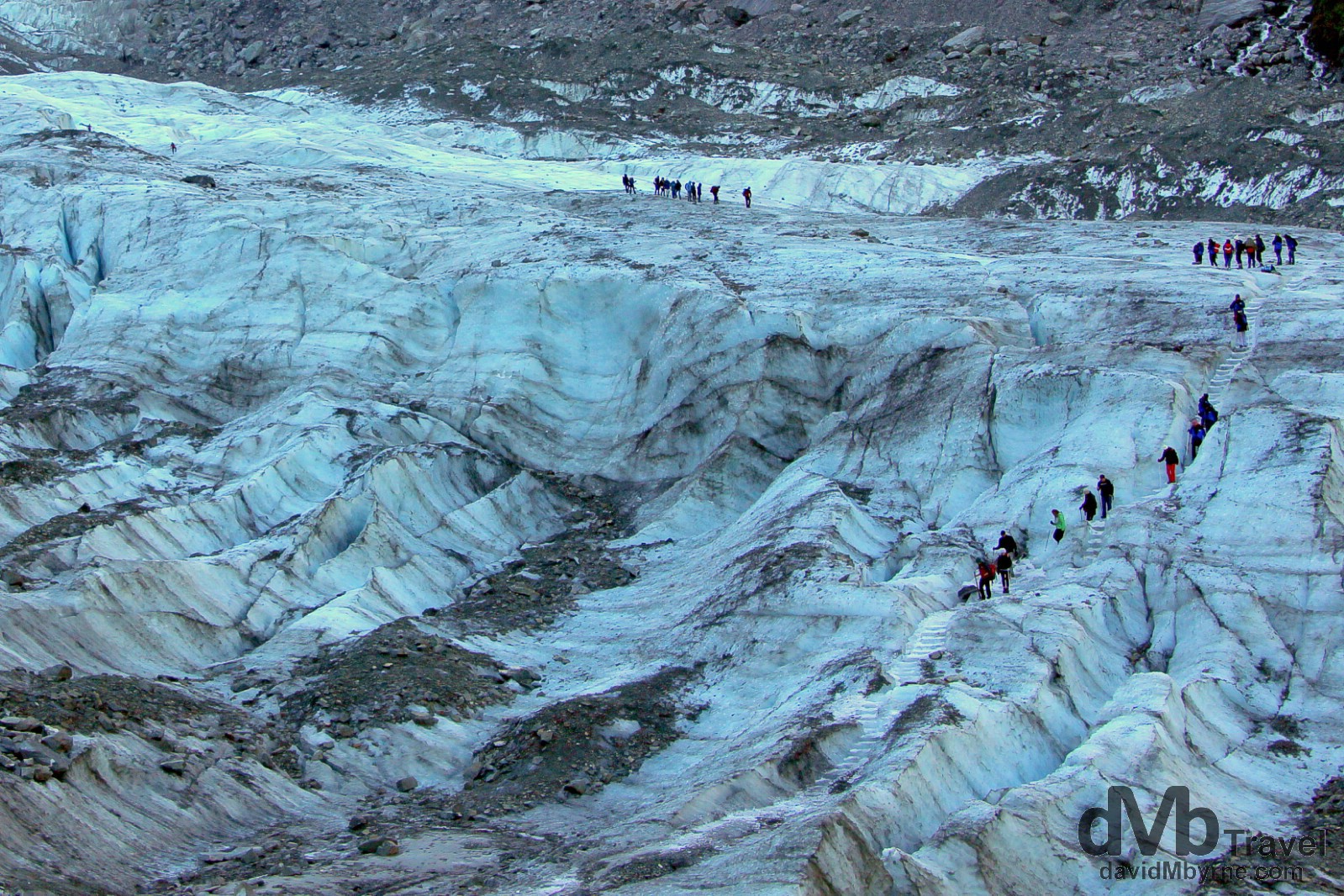 In much the same way as throwing yourself off of an adequately stable ridge (bungee jumping) or out of a perfectly airworthy aeroplane while strapped to a total stranger (skydiving), strapping on some crampons & going for an amble on a glacier is one of those quintessential New Zealand must-dos (and don’t mind if I do). That’s what kept me busy (& cold) for most of today as I took a guided glacier walk on Fox Glacier, the very large chunk of ice residing in a Southern Alps valley not far from the cute little village of the same name almost exactly midway down the West Coast of New Zealand’s stunning, great outdoorsy South Island.

Hikers on the blue expanse of a section of Fox Glacier (

Today was the most glorious of days to take a walk anywhere, let alone on a glacier; the crystal clear blue skies & sunshine offered a welcomed respite from the recent, incessant rain. All that said, in the sheltered valley in which the glacier sits it was cold. It was very, very cold. 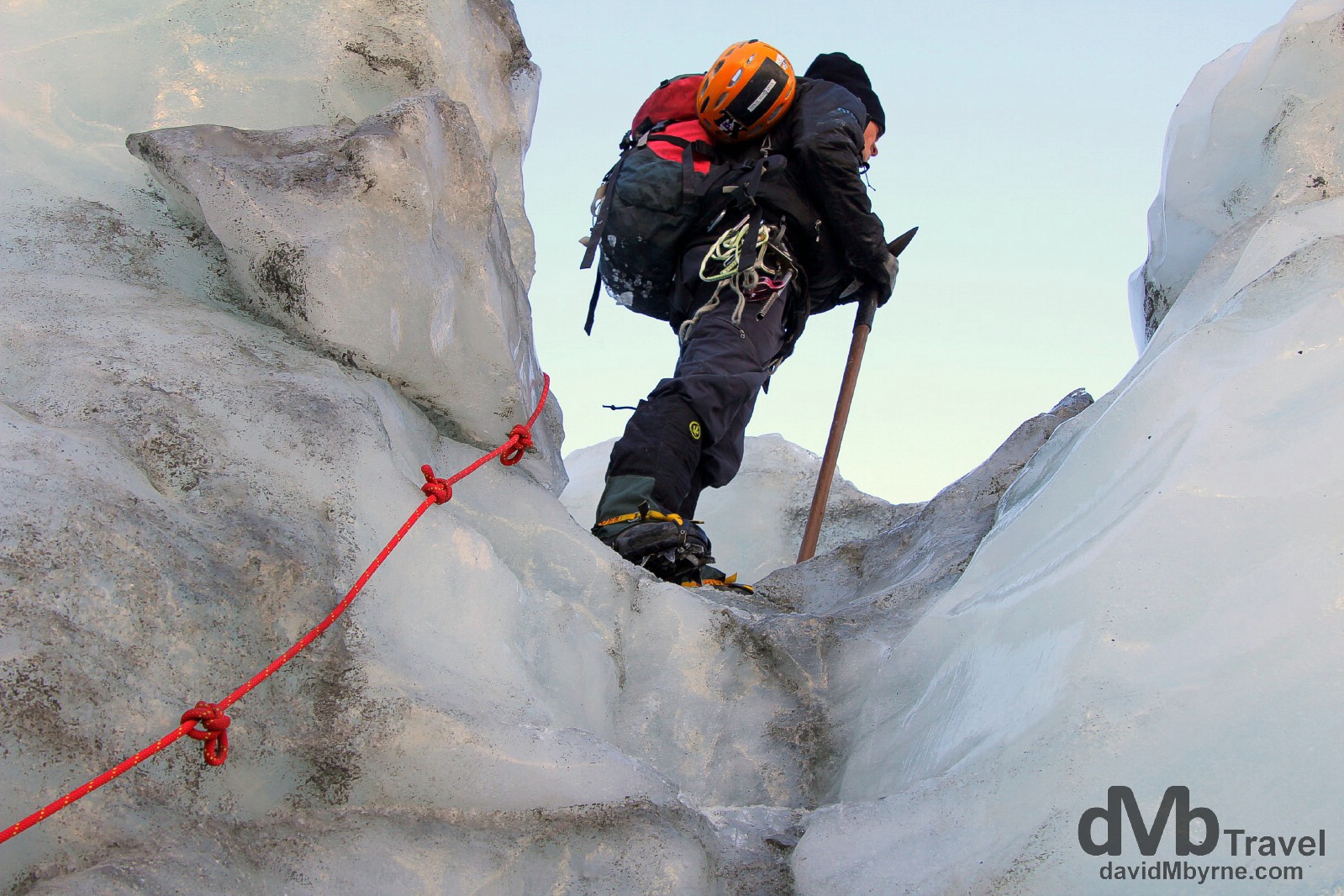 Follow the leader. You don’t have to take a guided walk to sample the cool delights of Fox Glacier. The guided walks are not exactly cheap and you’re free to strike out on your own, crampons or no, if that’s your want. But make no mistake Mr/Mrs Independent, you best know what you’re doing. Fox Glacier, South Island, New Zealand. May 19th 2012.

I took a lot of pictures today but upon review now I see I’m not terribly happy with many of them – the glacier resting in a shaded valley, overhead of which were gloriously bright snowcapped mountaintops, meant I was battling exposure issues all day. So I resorted to photographing things like, emm, crampons. 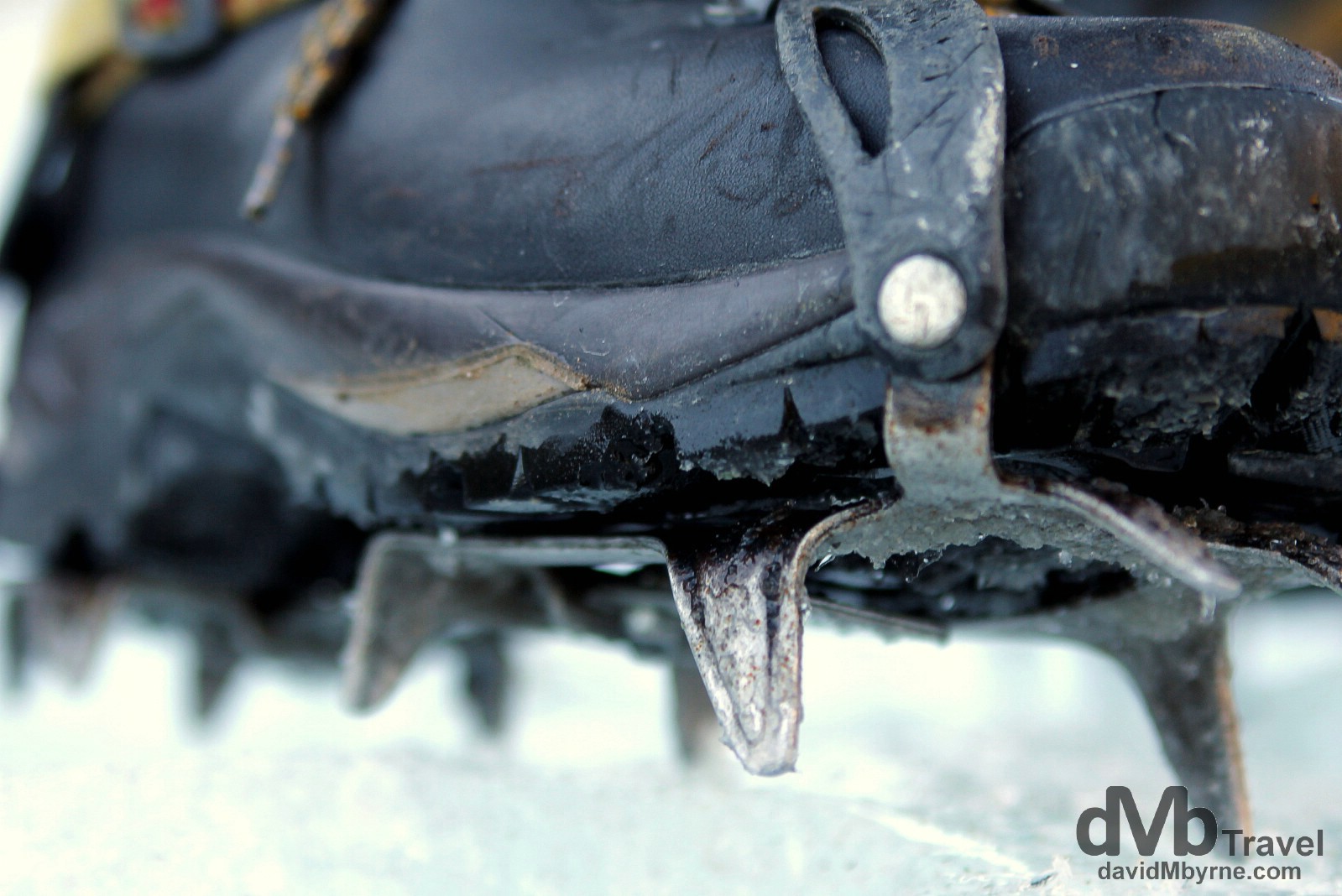 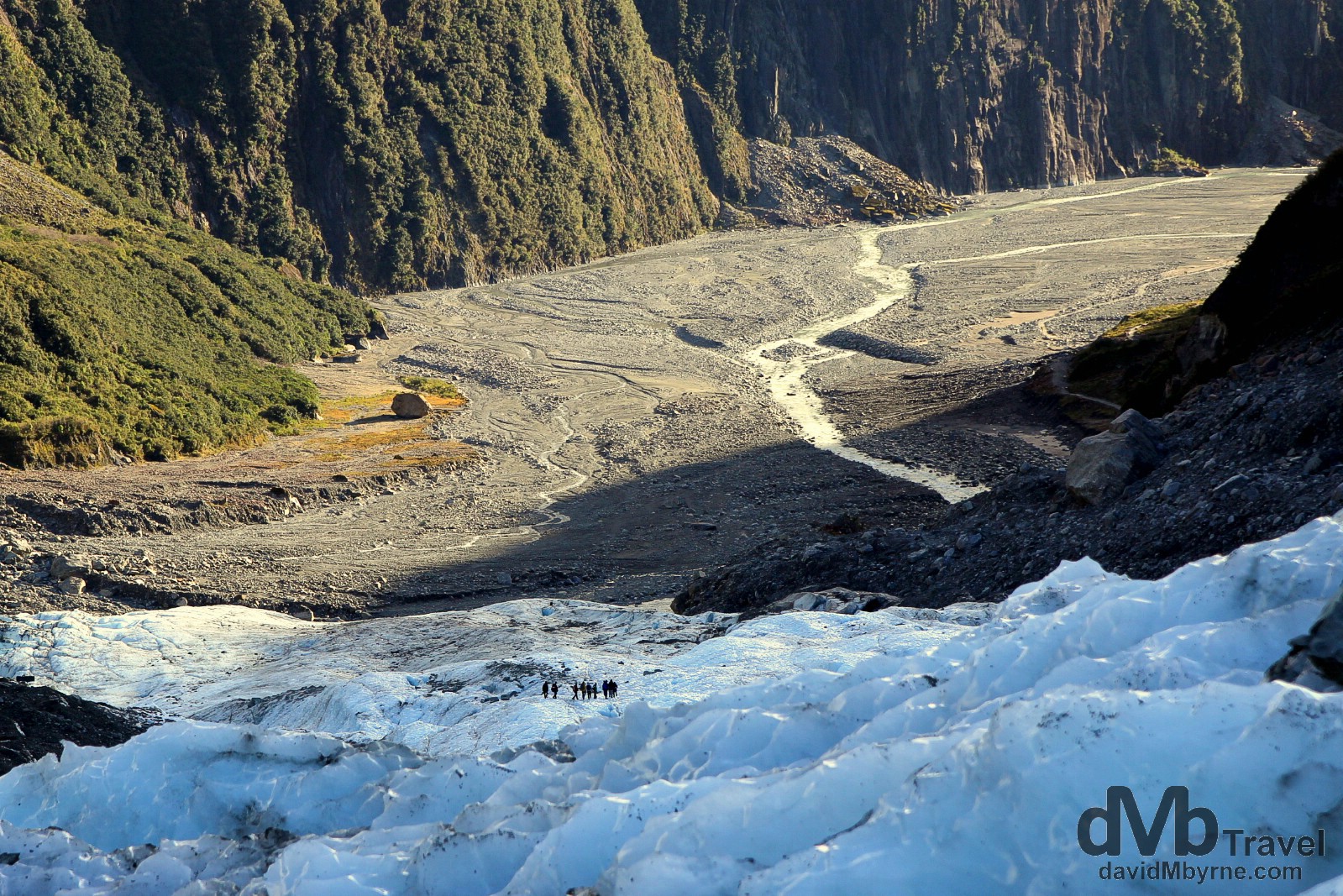 Distant figures on the lower reaches of Fox Glacier. The twin glaciers of Westland Tai Poutini National Park, Franz Joseph Glacier (which is presently, as of May 2012, not offering guided walks due to a recent glacial collapse) & Fox Glacier, are unique in that nowhere else in the world at this latitude do glaciers come so close to the ocean. The development of the glaciers, which are geographically 23 kilometres apart, is largely due to the seemingly endless rain that the West Coast of New Zealand’s South Island experiences (I’d well believe that); snow falling in the glaciers’ broad accumulation zones high in the Southern Alps fuses into clear ice before surging down the valley. Fox Glacier, South Island, New Zealand. May 19th 2012.

Retreat!
The above picture clearly shows the Fox Glacier valley floor in the far distance, somewhere the glacier would have rested in years gone by – the glacier, & like most glaciers worldwide, is retreating up the valley (& has been for years). I took a guided walk on the Fox Glacier on my first trip to New Zealand back in 2003. I can’t remember the location of the glacier face back then but suffice to say it would have been further down the valley from its present location. 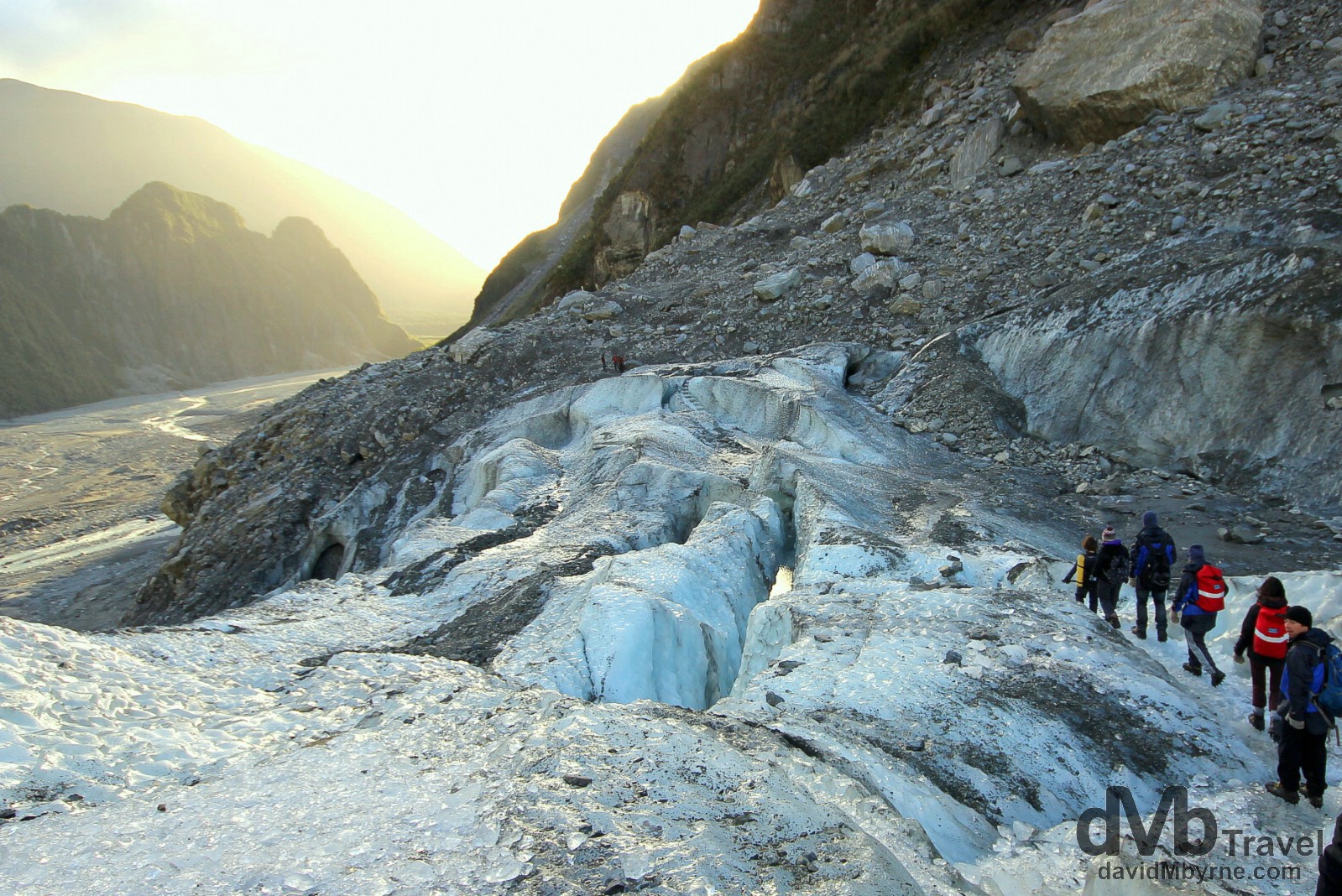 A guided party descending the Fox Glacier as late afternoon sunlight bathes the valley below. This was towards the end of my glacier walk as I was descending the glacier to the valley floor. It was late in the afternoon and the intense light from the setting sun, sheltered by the wall of the valley in the distance, made for a wonderfully warming sight, in stark contrast to the morbid cold of the glacial ice. Fox Glacier, South Island, New Zealand. May 19th 2012.