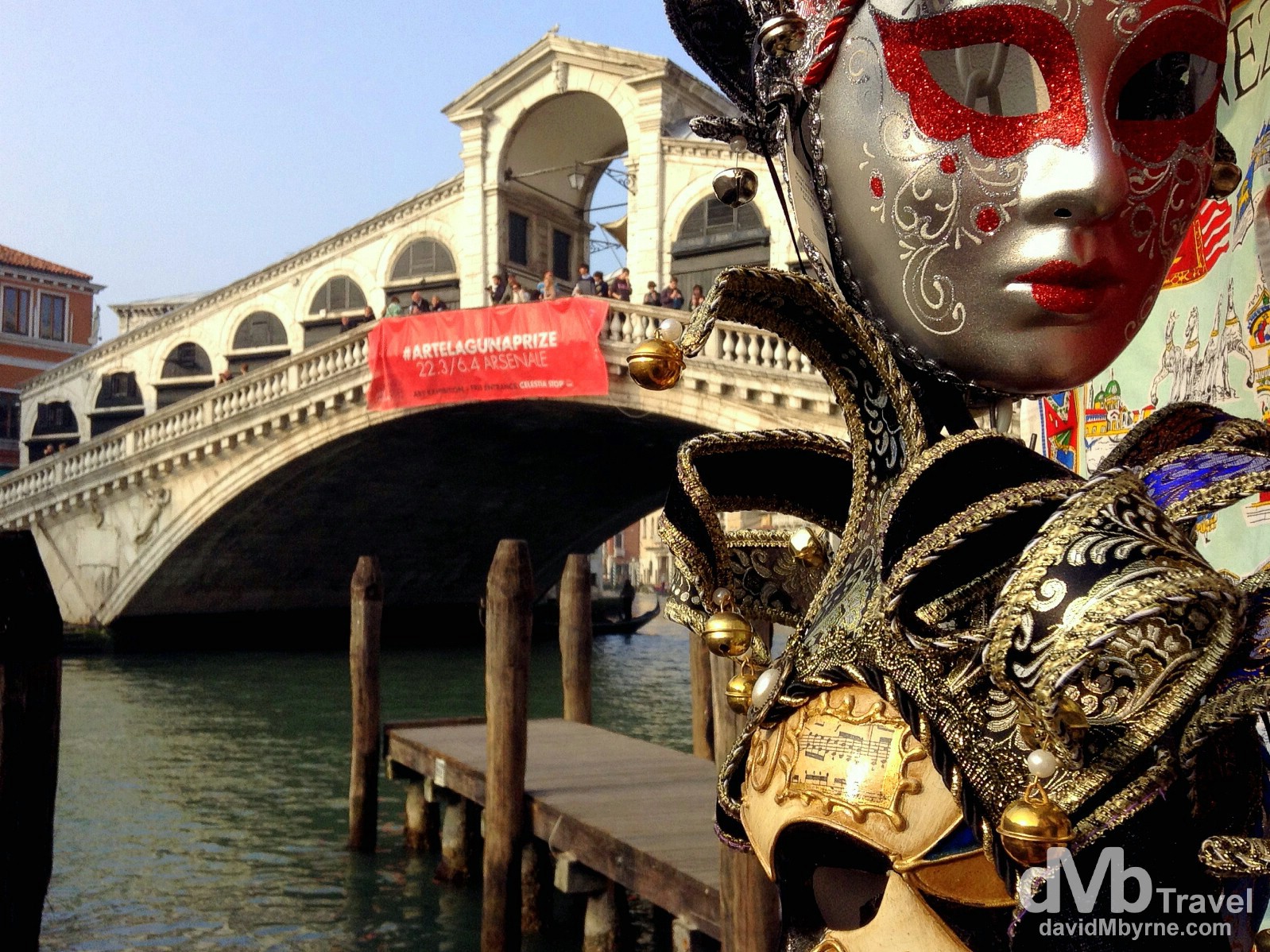 I vividly remember last year walking around the mock-up of Venice that is the Venetian Hotel in Las Vegas, Nevada & thinking how it’d be cool to get back to the real thing, recalling with fondness my first & only visit to Venice back in 2007. That was unexpected because Venice back then didn’t particularly impress me all that much – I remember it being horridly dirty & unkempt, horridly busy, & horridly expensive. It still is all those things but, & like it or loathe it, the world’s only fully pedestrian city is as iconic as it is unique, the sort of place that will never fail to attract the hordes no matter the time of year. 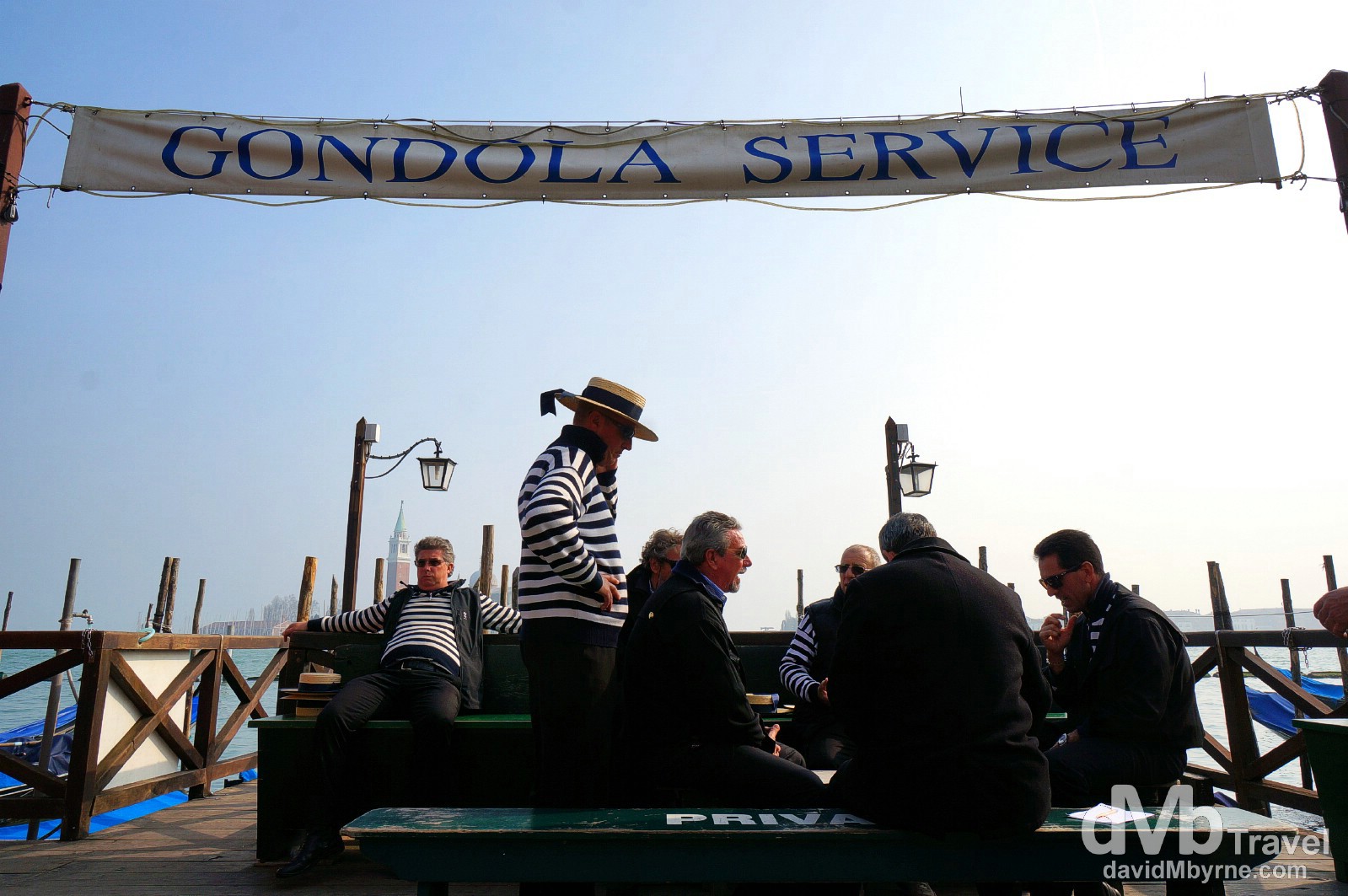 Gondola Service is slack. These guy wouldn’t be playing cards were it high season. By the famous Grand Canal off the equally famous Piazzetta San Marco in Venice (

The whole city is an extraordinary architectural masterpiece in which even the smallest building contains works by some of the world’s greatest artists such as Giorgione, Titian, Tintoretto, Veronese and others.

It’s low season here now which means there are people everywhere, just not as many people as in high season of May through September. Venice is that kind of place, busy all year around – the UNESCO World Heritage listed sanctuary, built on 118 islands with some 150 canals & over 400 bridges, attracts over 20 million of my ilk a year, an amount that exceeds Venice’s population two-hundredfold. They all come to see the Venice of today, which by all accounts hasn’t changed all that much form the Venice of the 12th to 16th centuries when the city was the great maritime & merchant power of the day. Today the city lives off of its glorious past and functions solely as a tourist destination, riding its romantic charm for all it’s worth (& it’s worth a lot to a lot of people). Yes, people do actually call Venice home but it’s hard to comprehend that when everything so overwhelmingly shouts tourism as it does here. Strange as it may seem but in many ways the Venetian mock-up in Las Vegas is less of a charlatan than the real deal itself. 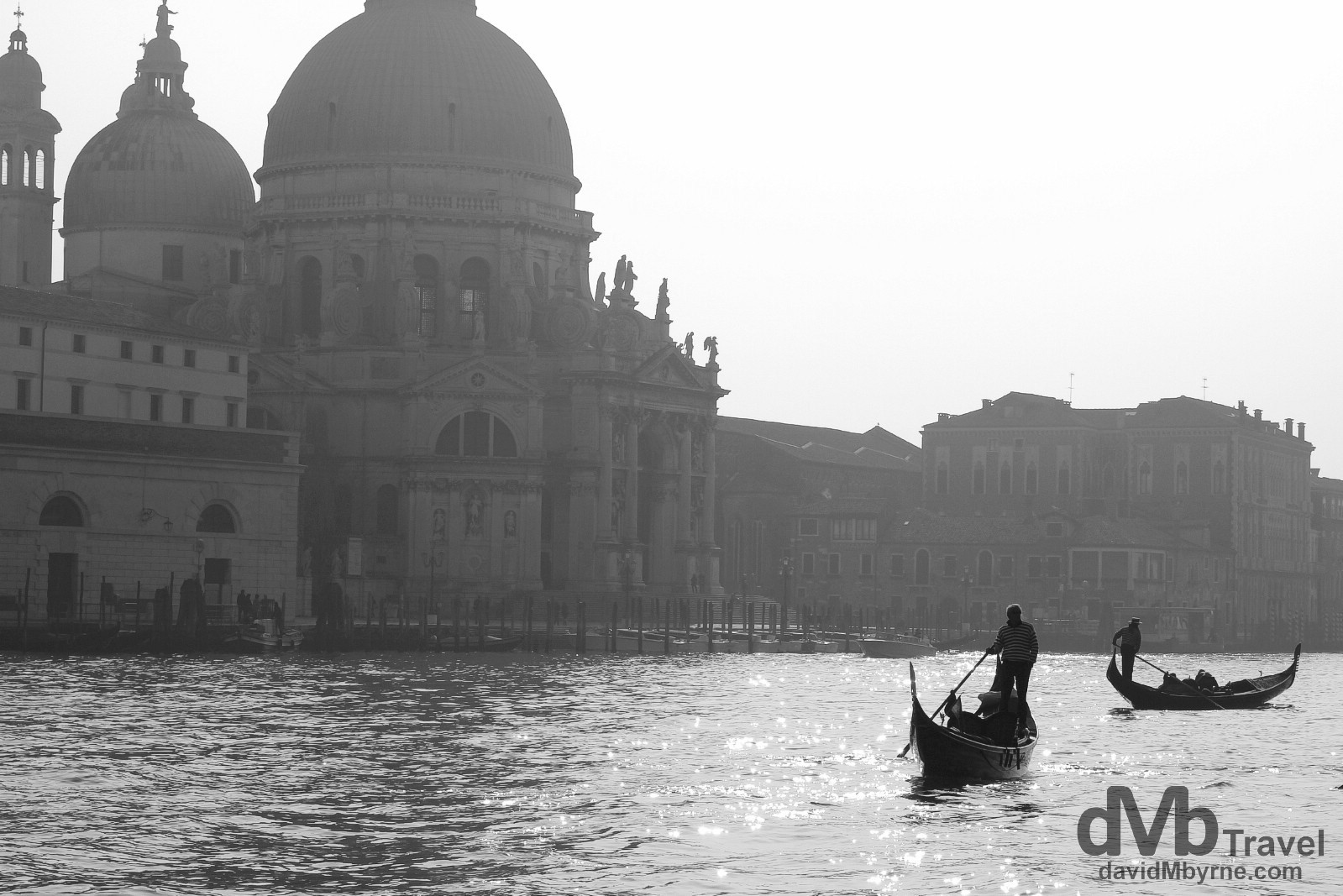 The main thoroughfare in the world’s only pedestrianised city is this waterway, The Grand Canal. The reverse s-shaped canal, which cuts the city in half, is almost four kilometres long and between thirty and seventy metres wide but at no point much deeper than five metres. The majority of the city’s most important buildings stand on the canal with their main façades fronting it all of which makes the Grand Canal the best place from which to view the city. Venice, Veneto, Italy. March 18th, 2014.

Needless to say the sole reason I returned here to Venice was to see what I could come up with photographically. It was fun. A lot of fun. Just as it was back in 2007, the highlight of this visit was getting lost while meandering the endless lanes of the city – I always seem to go left when right was the obvious choice & vice versa; I hung out a lot in Piazza San Marco people & pigeon watching; I took a few trips up & down the Grand Canal; & I took advantage of the low season numbers to visit some attractions I deemed not worthy of queuing hours for back in 2007 – no queues & cheaper accommodation prices greet the out-of-season visitor & €25 for a no-frills double room a few minutes’ walk from the Rialto Bridge was another highlight.

Decorative carnival masks by the Rialto Bridge, the most famous of the Venetian bridges & one of only three to cross the Grand Canal – it was the only bridge spanning the canal up until 1854. Thronged with tourists most hours of the day, the current bridge superseded a succession of wooden and sometimes unreliable structures – in 1444 a forerunner collapsed under the weight of the crowd gathered to watch a wedding procession. The decision to construct a stone bridge was taken in 1524. Venice, Veneto, Italy. March 19th, 2014.

The finest drawing-room in Europe. 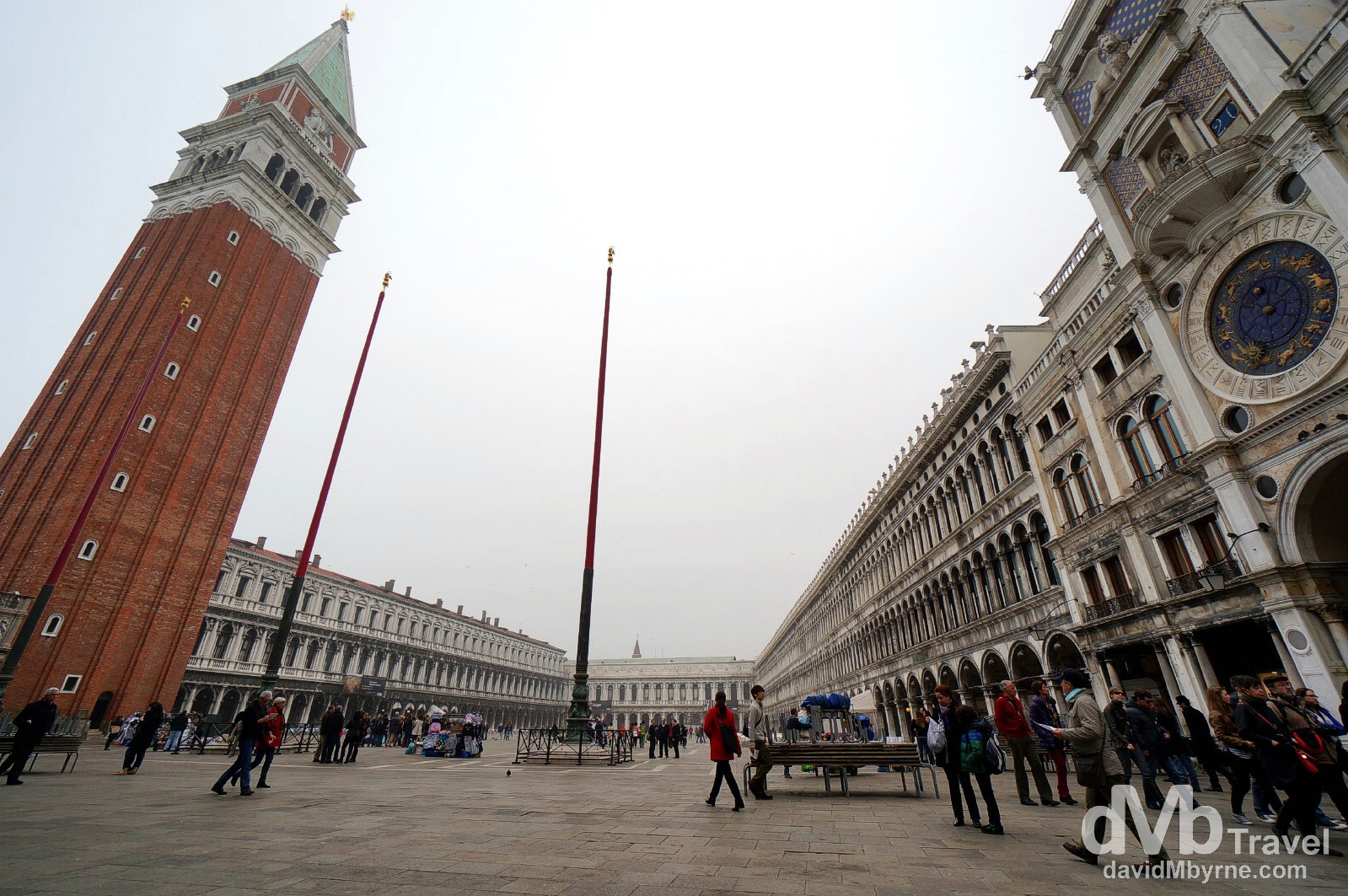 Today was a muggy day in Piazza San Marco, the focal point of the city & the only square in Venice, the only great urban space in a European city where human voices, not to mention the coo of the ever-present pigeons, prevail over the sounds of motorised traffic. The square is the location for the Basilica di San Marco, one of the most exotic of Europe’s cathedrals. I was here early, when I captured this picture, and I dropped again in a few times throughout the day. The conditions didn’t improve all that much but the people watching did. Every cloud and all that. Venice, Venito, Italy. March 19th, 2014

Venice is like eating an entire box of chocolate liqueurs in one go. 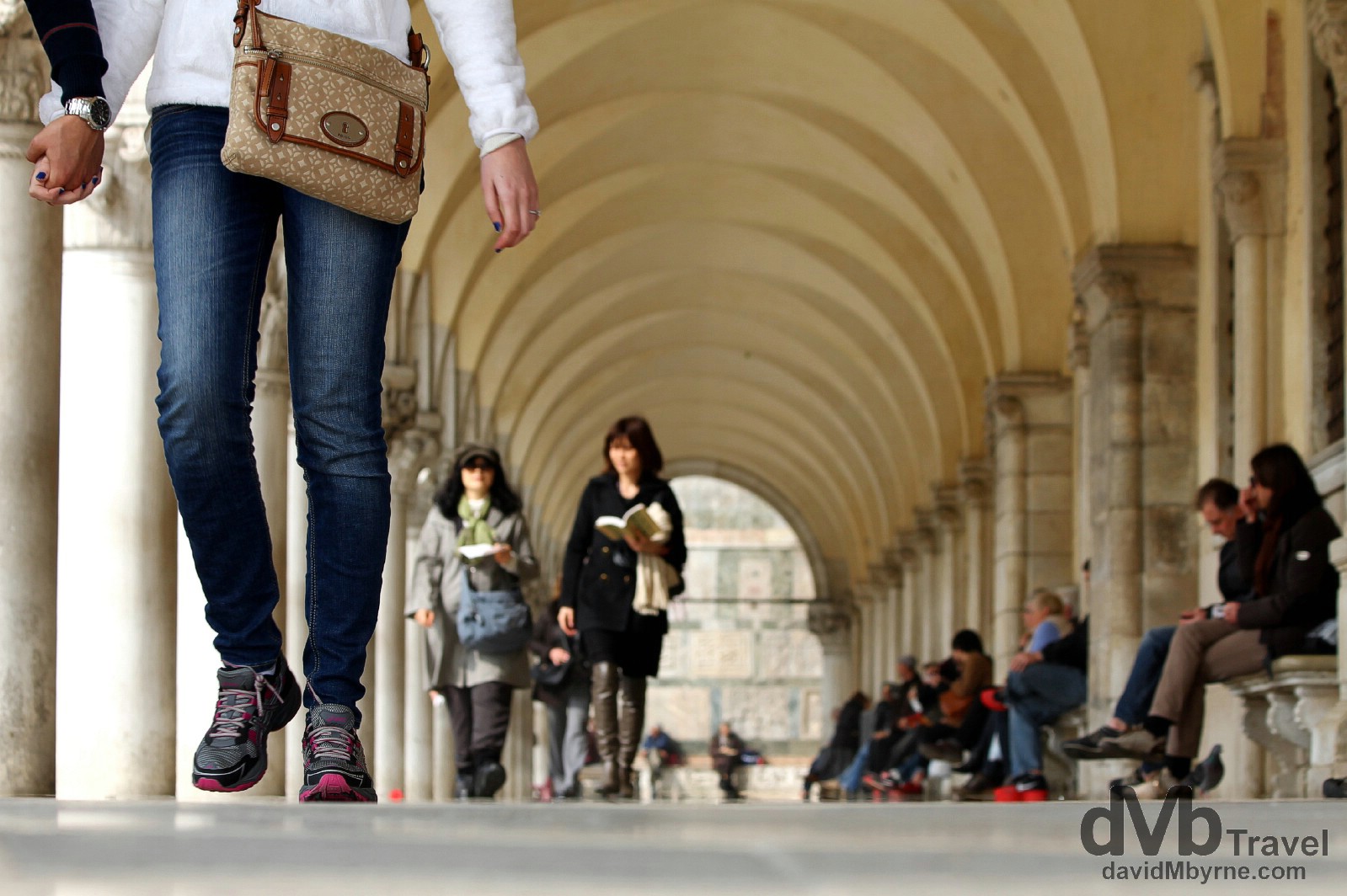 Walking under the arches of Palazzo Ducale (Doge’s Palace) off Piazza San Marco, the former home for the Doge, the chief magistrate, & the seat of the Venetian government. Today the building, which has a few very photogenic arched walkways, houses a museum. Venice, Venito, Italy. March 19th, 2014

Moving On
I leave in the morning, destination Pula in Croatia, a 2-hour train followed by a 3-hour bus trip away. As I type I’m debating whether or not to pay another & last first-light visit to Piazza San Marco in the morning. I’m happy with the images I’ve captured thus far so I might just have a lie-in tomorrow ahead of a day of train & bus travel. I guess I’ll sleep on it.