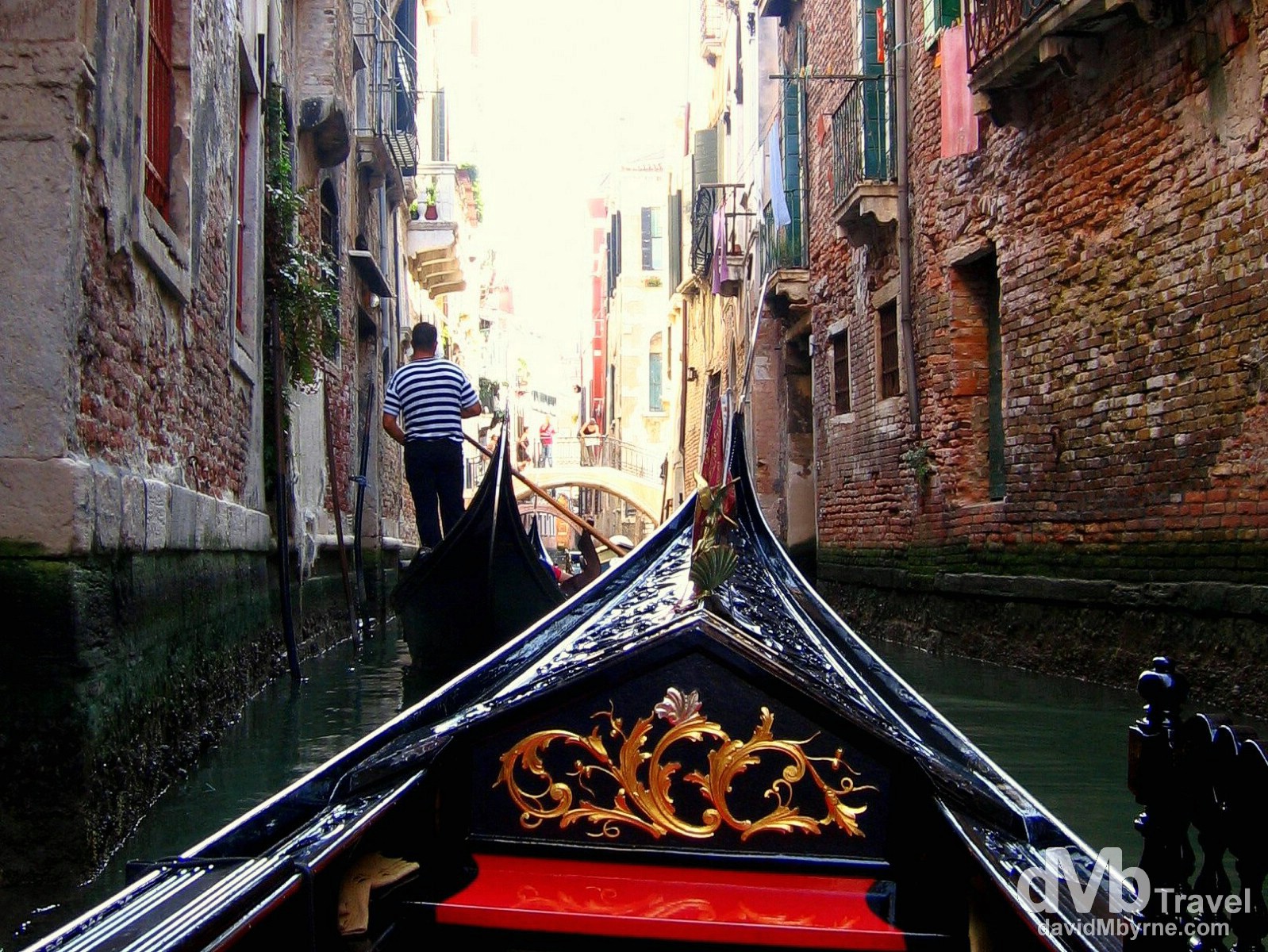 Italy is a nation with an artistic and architectural legacy that few other countries can rival – the country has 40 UNESCO World Heritage listed sites, more than any other nation, with the Tuscany region of the country alone having more classified historic monuments than any country in the world. One of the country’s better known UNESCO-listed site isn’t a site at all, it’s a whole city – Venice, one of Europe’s biggest draws, as iconic a location as it is unique. 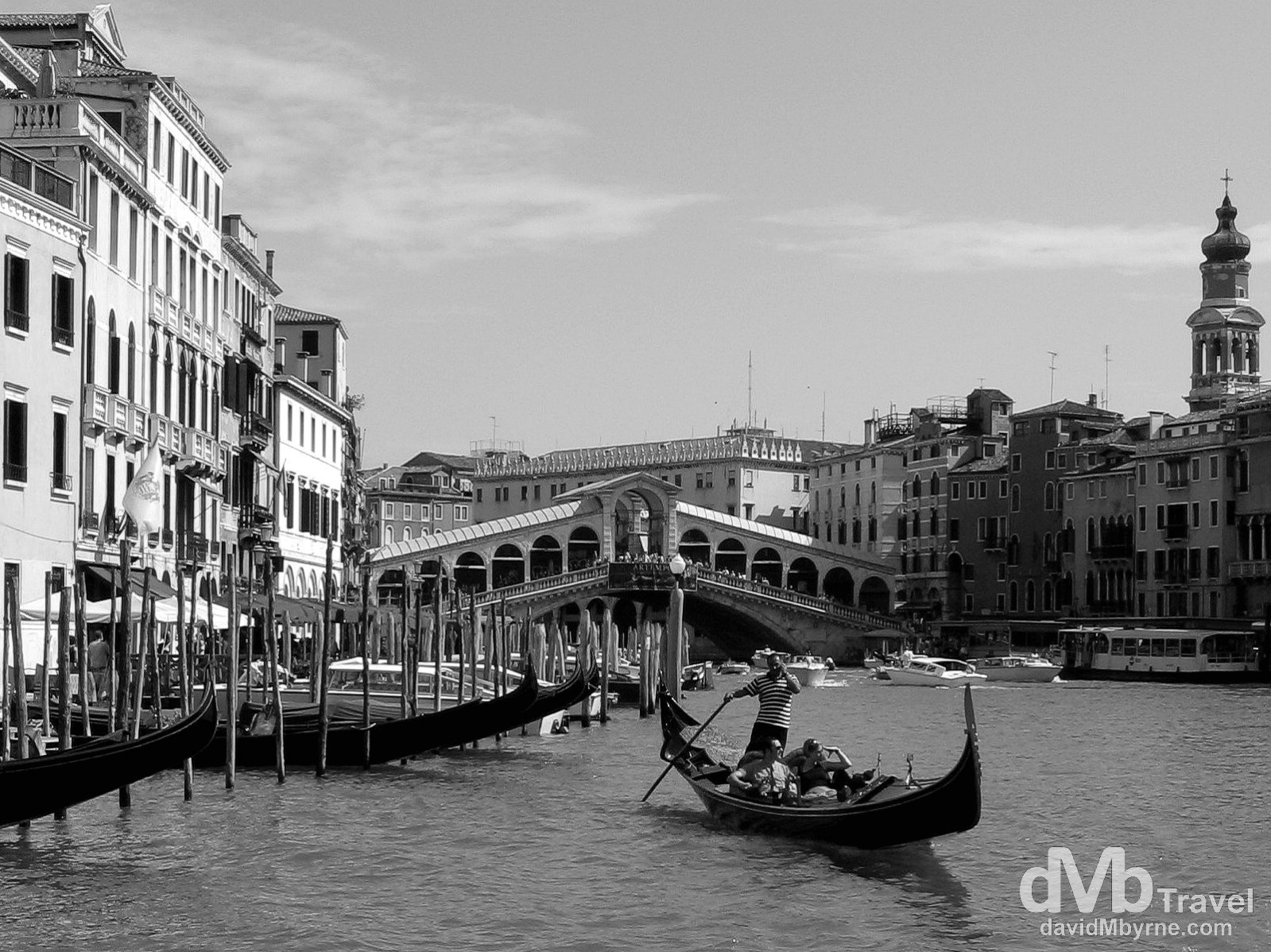 The main thoroughfare in the world’s only pedestrianised city is this waterway, The Grand Canal. The reverse s-shaped canal, which cuts the city in half, is almost four kilometres long and between thirty and seventy metres wide but at no point much deeper than five metres. The majority of the city’s most important buildings stand on the canal with their main façades fronting it, all of which makes the Grand Canal the best place from which to view Venice. In the distance is the city’s famed Rialto Bridge, the most famous of the Venetian bridges & one of only three to cross the canal – & it was the only bridge spanning the canal up until 1854. Thronged with tourists most hours of the day, the current bridge superseded a succession of wooden and sometimes unreliable structures – in 1444 a forerunner collapsed under the weight of the crowd gathered to watch a wedding procession. The decision to construct a stone bridge was taken in 1524. Venice (

Venice || The Italian Black Sheep
Read any pamphlet on Venice and it’ll tell you the same thing; that it’s a unique city and every bit as beautiful and romantic as its reputation suggests. Which it is. But those same glossy pamphlets will fail to tell you that it’s busy, expensive and it has a neglected appearance that is hard to look beyond. The city could be an independent state or republic, something it was for centuries before finally joining the then 5-year old Kingdom of Italy in 1866 – economically and socially ossified, it’s losing people by the year and playing virtually no part in the life of modern Italy. During its 12th to 16th century heyday The Venetian Republic was a major merchant power and a staging area for the Crusades as well as a very important center of commerce, especially the spice trade, and art in the Renaissance. Today, however, its sole role is to amuse tourists & extract as much money from them as possible. It’s deluged by some 20 million of them a year, an amount that exceeds the city’s population two-hundredfold. What that means is that you certainly won’t be alone in appreciating the city’s charms and I had to really get lost among the narrow Venetian lanes to escape the crowds, something that’s not hard to do and is well recommended; you’re almost guaranteed to stumble across some hidden gem of a square, some tranquil side canal or some uniquely Venetian scene.

The whole city is an extraordinary architectural masterpiece in which even the smallest building contains works by some of the world’s greatest artists such as Giorgione, Titian, Tintoretto, Veronese and others.

The highlight of this, my first visit to the world’s only fully pedestrianised city was the 20-minutes I spent being punted through the canals of Venice and along sections of the Grand Canal in a gondola, the quintessential Venetian indulgence. Yes, floating through Venetian waterways in a gondola is not exactly cheap (see observations below) but at least it offers up a nice reprieve from the busy pedestrian lanes of the city. Venice, Veneto, Italy. August 27th, 2007.

A few observations made during the last few days here in Venice.

· Where’s the TLC?
Italy has a reputation for fashion and image with its people obsessed with looking good. It’s a pity then that the same can’t be said of their surroundings. If what I’ve seen so far of the Italian countryside and its cities (admittedly not much), they could do with a serious cleanup. The countryside from the Swizz boarder to Venice, the odd vineyard aside, was unappealing. As for Venice itself. Well, it may be extremely picturesque but its buildings are positively crumbling (some say it adds to the romantic appeal of the city but I say it just looks neglectful), its lanes are dirty and rubbish filled and there is graffiti (a real problem in Italy, it seems) everywhere, even on main tourist sights like the Rialto Bridge. About the only place you won’t find graffiti in Venice is on the gondolas.

· Pigeon Pandemic
They are everywhere too. I stood in Saint Mark’s Square, the only square in the city, and looked on in astonishment at fellow tourists letting pigeons crawl all over them. No picture is worth that. 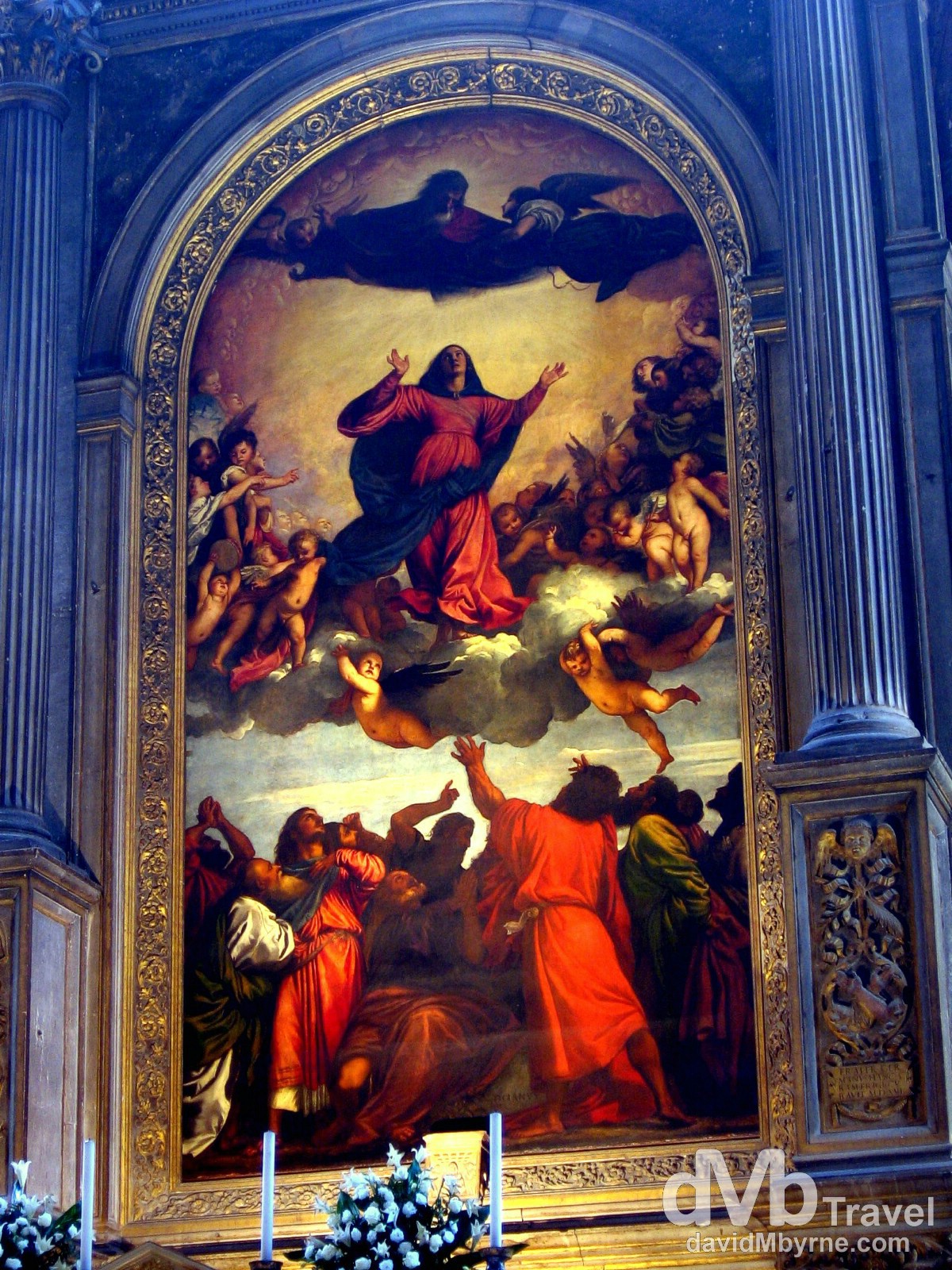 Titian’s 1518 The Assumption in Santa Maria Gloriosa dei Frari church. Titian (1485-1576), a Venetian boy, was one of the famous Italian painters of the High Renaissance, the 30 year period of art revival that started in about 1490 & that was concentrated mainly in Florence, my next port of call, and, to a lesser degree, Venice. While The City of Venice is somewhat miffed that it doesn’t have more works by Titian on display within its museums and churches, it can boast of having this, The Assumption, the most famous Titian masterpiece in Venice. According to my guidebook it is “a swirling, dazzling piece of compositional and colouristic bravura for which there was no precedent in Venetian art“. The painting hangs behind the altar of the Santa Maria Gloriosa dei Frari church, a mid-fourteenth century Franciscan church that took over a hundred years to build. Titian’s tomb is also to be found here. He died 1576 from a Venetian plague epidemic and was the only casualty of that outbreak to be given a church burial. Santa Maria Gloriosa dei Frari church, Venice, Veneto, Italy. August 27th, 2007.

· Gondola rides are expensive
At €70 for a 20-minute splurge (that’s €210 an hour, not a bad payday if you can get it), being punted around Venice in a gondola will hurt your pocket. It’s a necessary expense – it’s something you have to do at least once in Venice – but for me it could have stung more. I boarded the gondola while exploring one of the quieter Venetian lanes. Earlier I’d been quoted €100 for a ride from the Rialto Bridge. Seemingly it’s more expensive from the “touristy” locations.

· 2 out of 3 ain’t bad
Nobody lives on the first floor of Venetian residences, as per my gondolier today. While most buildings have 3 floors, the threat of flooding means the 1st floor is nearly always uninhabited (although it might be used for some sort of storage). I found that Venetian tidbit interesting. I just wish I didn’t have to pay €70 to hear it.