Las Vegas, the largest city in the US state of Nevada, is America’s real life Sin City & the self-titled Entertainment Capital of the World. If New York never sleeps then Vegas doesn’t even nap. An adult neon paradise full of excess, temptation & noise, it’s a place where you can get drunk and then get married, a place where you can win big or lose it all. I’ve just spent the last three days here dealing with Vegas’ full-on hedonism. It’s my second visit here after my first back in 2003, that visit a fleeting, one-night stay. This time around I spent more time and thus had more fun. But I leave exhausted. 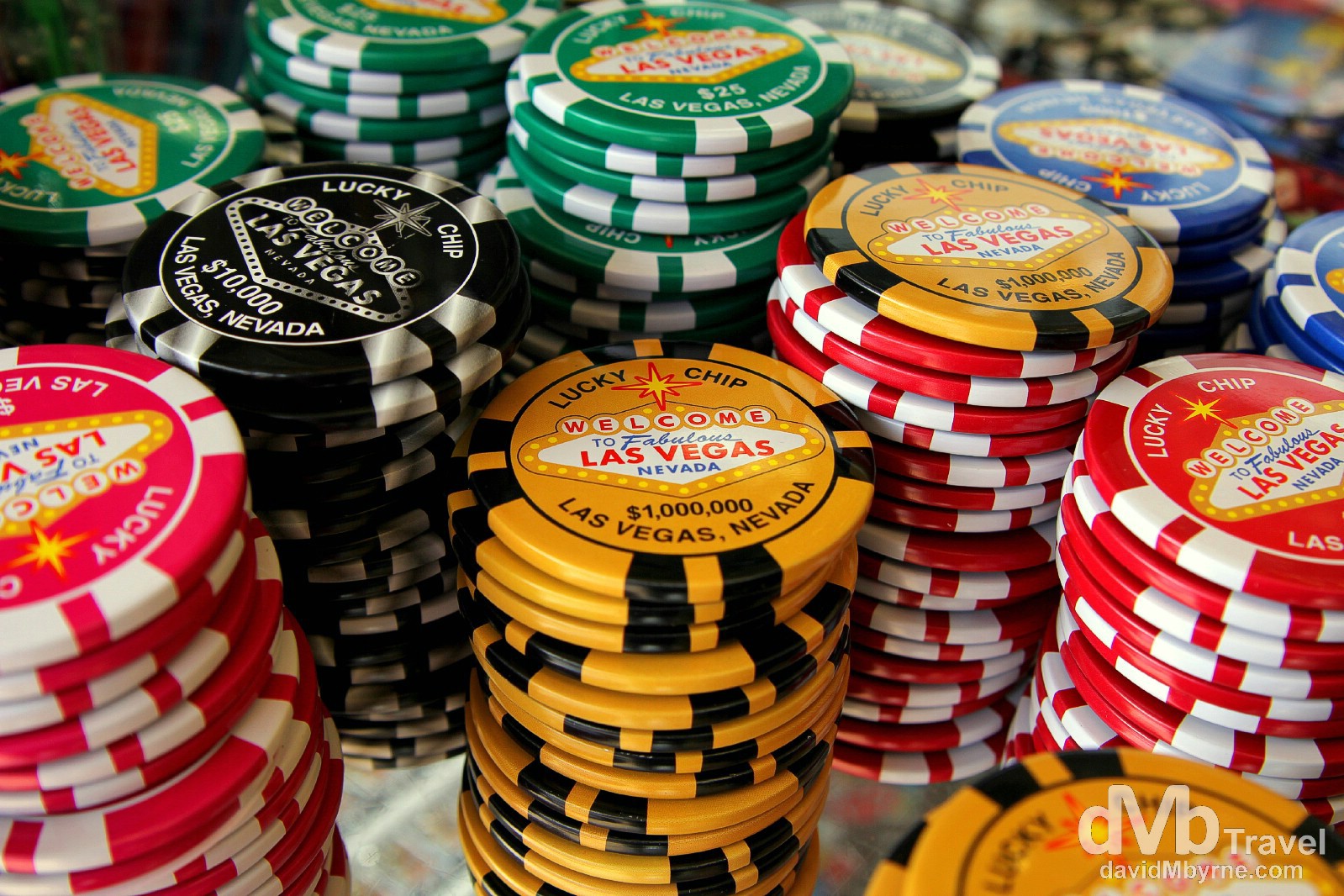 I spent a lot of money in the money pit that is Vegas. But not on gambling. My outgoings on that quintessential Vegas vice totalled $2, which enabled me to hit the flashing buttons on two of those electronic one-armed bandit machines a total of 3 times. However, it sure is/was fun to walk around the behemoth, themed, window-less & clock-less casinos, reaffirming myself as I went that I’m just not the gambling type. If you are then needless to say options abound for trying your luck, with ample help on hand to boot. Free classes with insights into how to beat the dealer are available at most casinos, all in a bid to part you from your money. But be warned if you do end up winning big (or even small) – winnings of non-U.S. citizens is subject to a 30% withholding tax. Lucky chips in Las Vegas (

Revelling || What Happens in Vegas Stays in Vegas 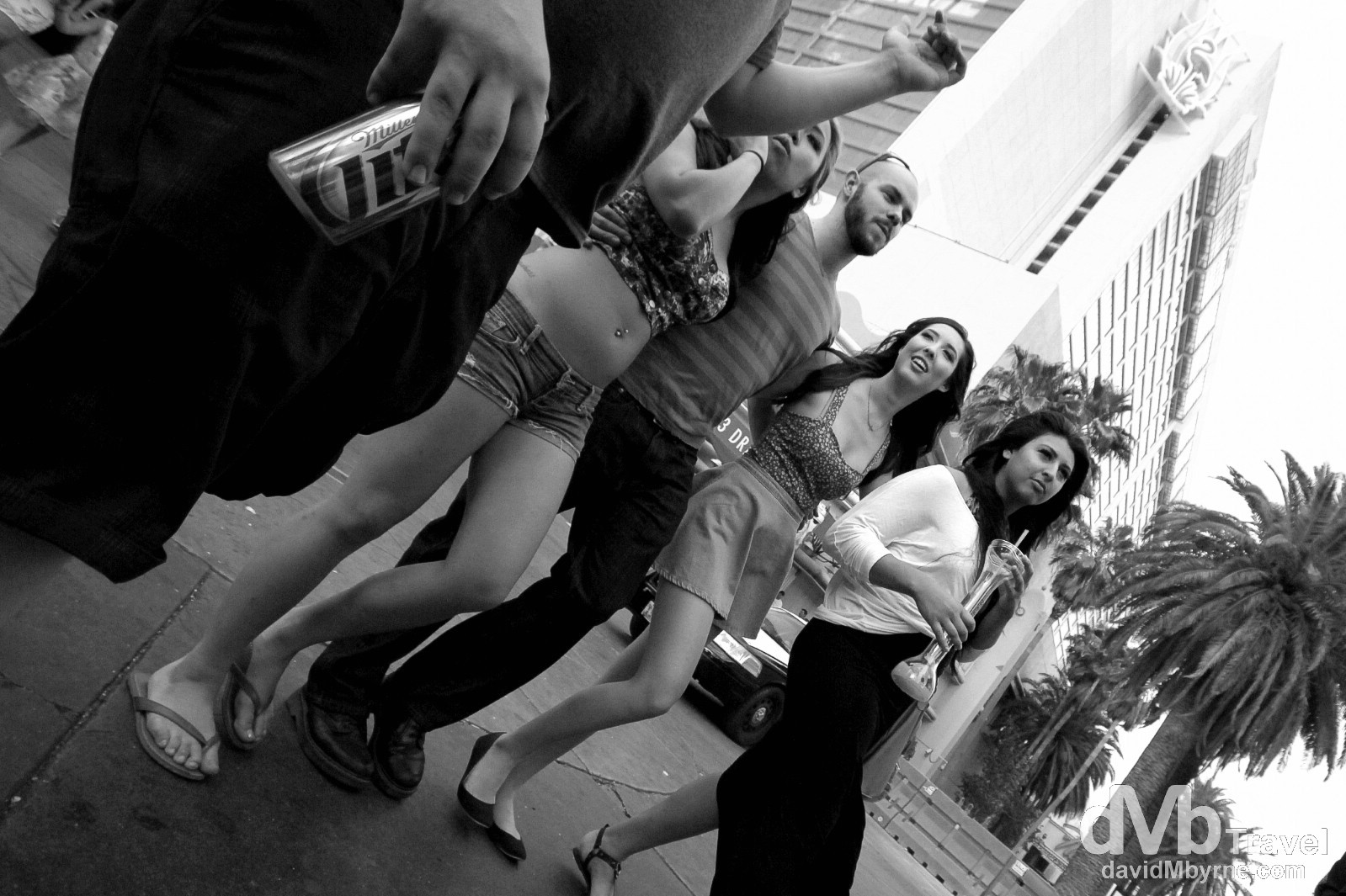 The start of another ‘What happens in Vegas stays in Vegas’ night. Although it is officially prohibited as per the law, drinking in public in Vegas is commonplace, amply fuelling the everyday-is-New-Years-Eve vibe that’s hard to avoid embracing when in Sin City. Las Vegas Boulevard (The Strip), Las Vegas, Nevada, USA. April 4th 2013. 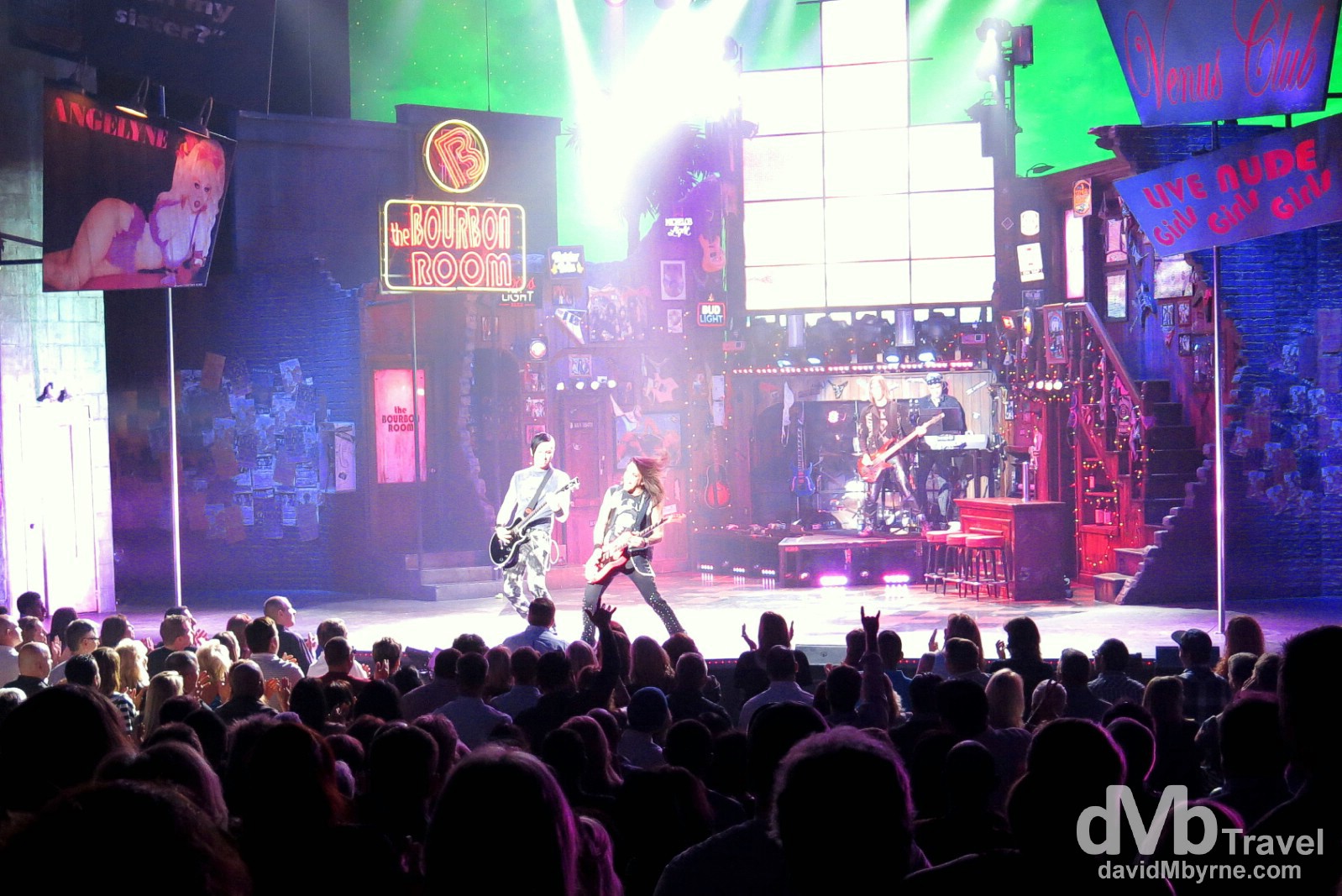 You have to see a show when you come to Vegas & I opted for Rock of Ages, primarily because tickets for the premier shows – Cirque du Soleil is really in vogue right now – were 1) wallet-busting or 2) not available (it was the weekend). Set in LA’s infamous Sunset Strip in 1987, Rock of Ages tells the story of Drew, a boy from South Detroit, and Sherrie, a small-town girl, both in LA to chase their dreams of making it big and falling in love. It’s a musical journey back in time to the era of big bands with big egos playing big guitar solos and sporting even bigger hair. And it’s a lot of fun. Showtime. Rock of Ages, The Venetian Hotel & Casino, Las Vegas, Nevada, USA. April 5, 2013.

Laying One’s Head (If One Must)

Vegas is renowned for its many mega-hotel/casino complexes, each recreating a exotic, fantasy or famous destination. I splurged for one of the 3 nights I spent in Vegas (the other two were spent the has-seen-better-days Rivera Hotel & Casino & the, em, Travelodge). 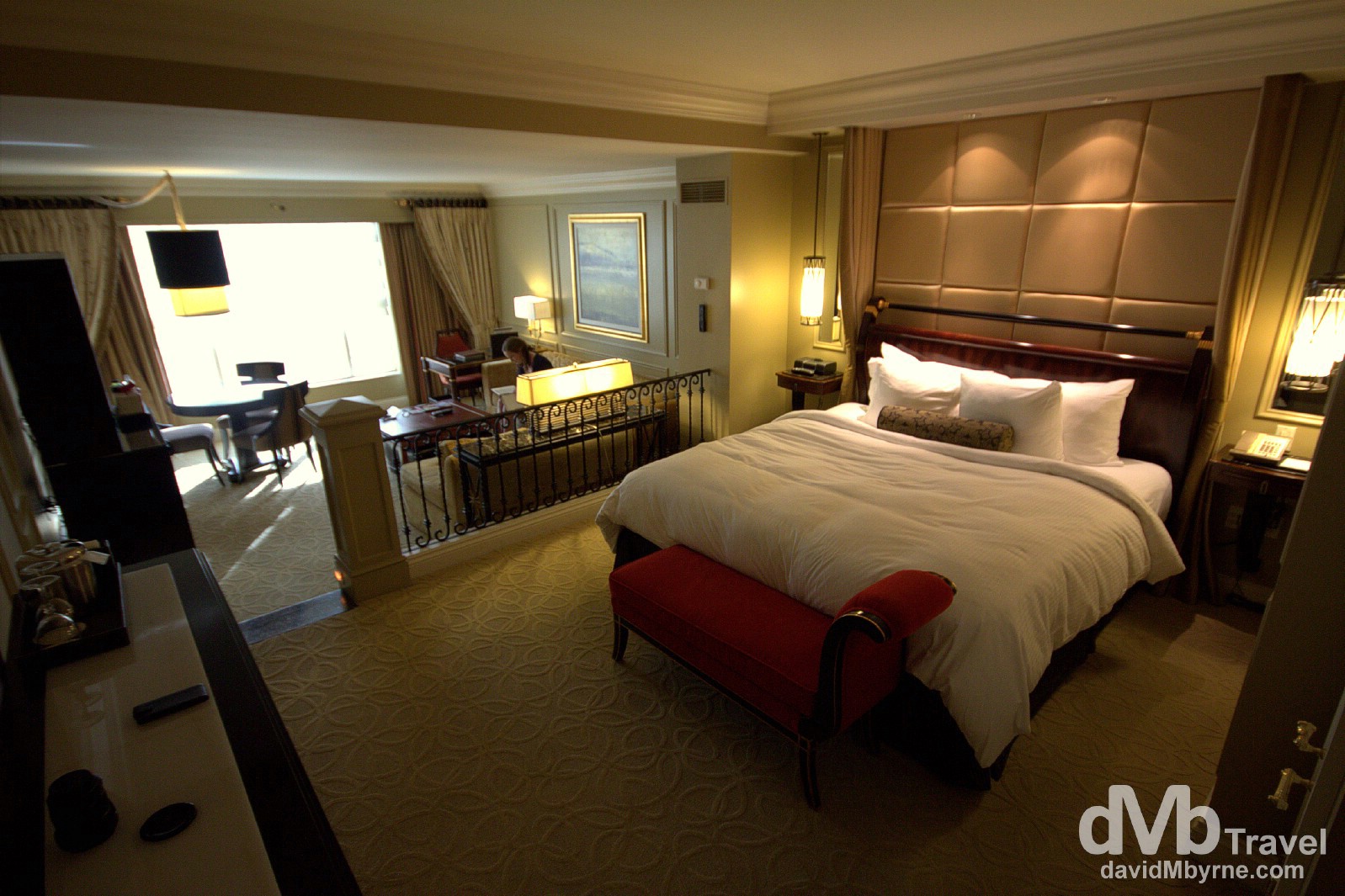 This room in the luxury, all-suite Venetian Resort Hotel & Casino cost me $200, a lot of money for a Vegas room – they can be had for as little as $30, although rarely on weekends when the vast majority of Vegas revellers are in town. Even though I’d been to Las Vegas before, my (naive) intention on this trip was to get some semblance of value for money by spending time in here pretending to order room service, prancing around in a robe, & playing with the various remote controls and switches dotted here, there & everywhere. Of course this is Vegas and spending much time in a room, even one that costs $200, is not likely to happen. Shouldn’t happen. Didn’t happen. A $200 suite in the luxury, all-suite Venetian Resort Hotel & Casino, Las Vegas, Nevada, USA. April 4, 2013.

It’s like being in Venice except you’re on the other side of the world, not to mention in the middle of the Nevada desert. The Venetian boasts a fully functional canal & gondola system complete with singing gondoliers ($15 for 4 minutes), as well as lifelike replicas of St Mark’s Campanile, the Rialto Bridge & this, a mock-up of St Mark’s square, minus the pigeons, but with human statues, as seen here. It’s no wonder this place, part of the largest five-diamond hotel & resort complex in the world, offering 4,049 suites and a 11,000 m² (120,000 ft/sq) casino, cost $1.5 billion, one of the most expensive resorts of its kind when it opened in May 1999. And it’s just one of many themed all-inclusive resort & entertainment complexes to chose from in Las Vegas. The Venetian Hotel & Casino, Las Vegas, Nevada, USA. April 4th 2013. 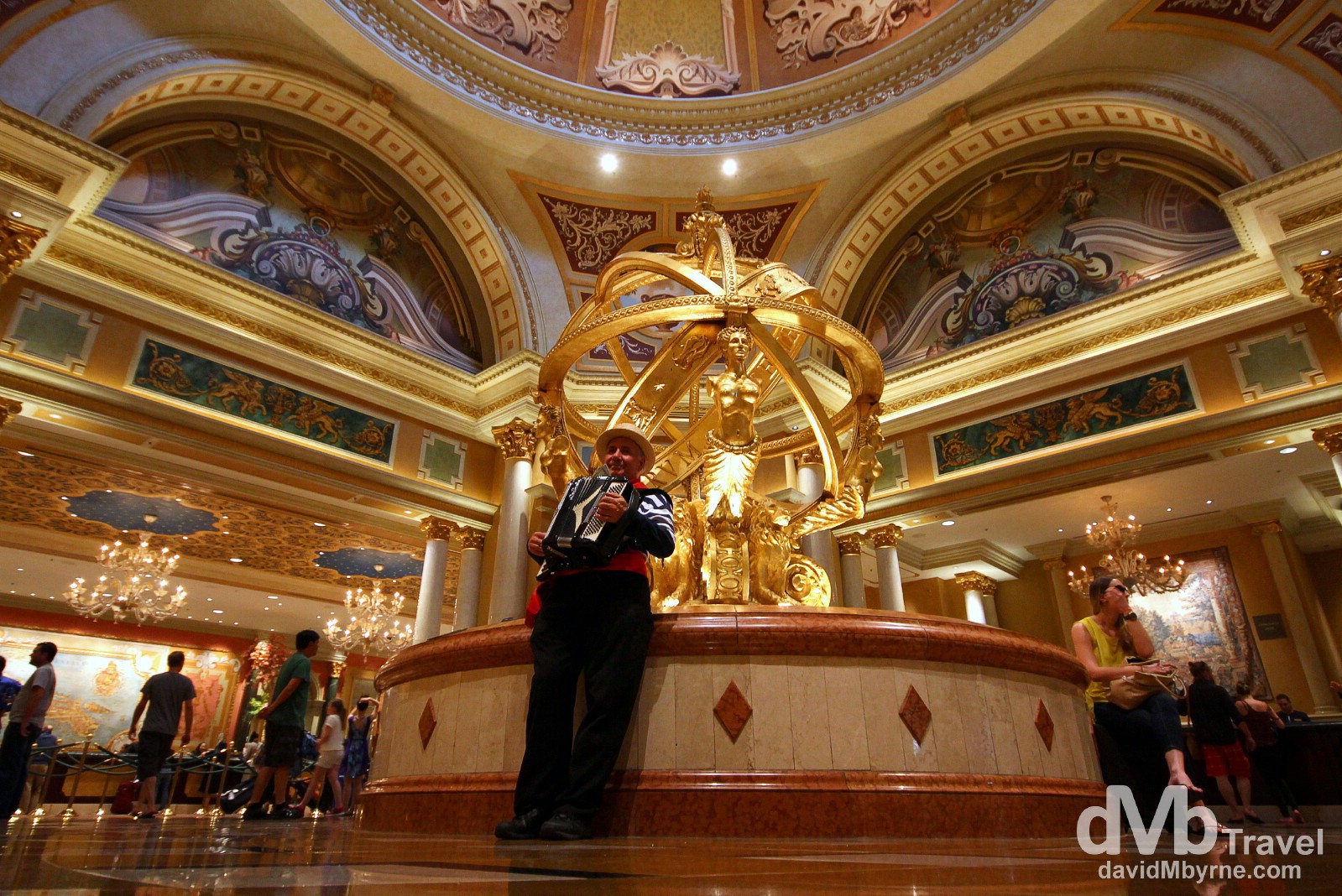 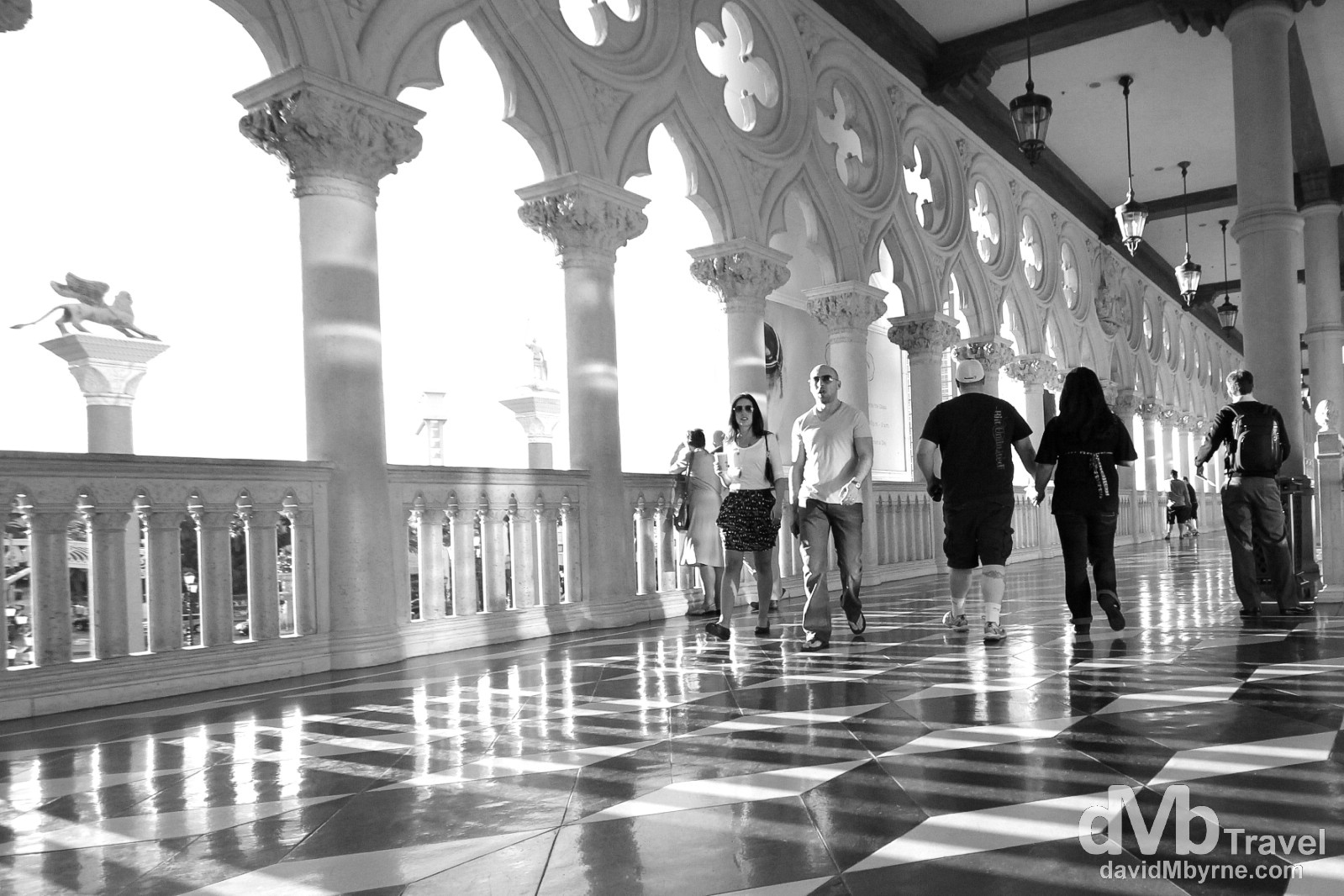 Las Vegas – History
Compared with other cities in the western U.S., Las Vegas (literally, “the springs” in Spanish) is a relatively recent arrival. It was founded in 1905, and for many years it was merely a small settlement in the middle of the desert. However, several pivotal events would come together in less than twenty years that would help Las Vegas grow into what it is today:

1. The construction of Hoover Dam in 1928 brought thousands of workers to the area.

2. Nevada legalized gambling in 1931, and downtown Las Vegas became an entertainment centre for the dam workers, with casinos and speakeasies. Business became so good that it surpassed Reno as the gambling capital of the world in less than 10 years. During the same period in the 1930s, Los Angeles was also growing rapidly from a small town into a global centre for the entertainment, aerospace, and defense industries; but because gambling was strictly banned in California at the time, Southern California workers began travelling to Las Vegas to enjoy gambling there.

3. In 1941, the luxurious El Rancho Vegas resort opened on what would later become the Las Vegas Strip. Benjamin “Bugsy” Siegel later opened the Flamingo Hotel in 1946. The opening of these two resorts started a building boom and established a tradition of one-upmanship (with each new hotel/casino trying to outdo its predecessors) that continues today; it also initiated a long tradition of organized crime involvement in Nevada’s gambling industry. By the 1990s, the enactment and enforcement of the federal Racketeer Influenced and Corrupt Organizations Act (the RICO Act) as well as investments by established corporations and the instalment of professional management virtually eliminated any remaining organized crime involvement. 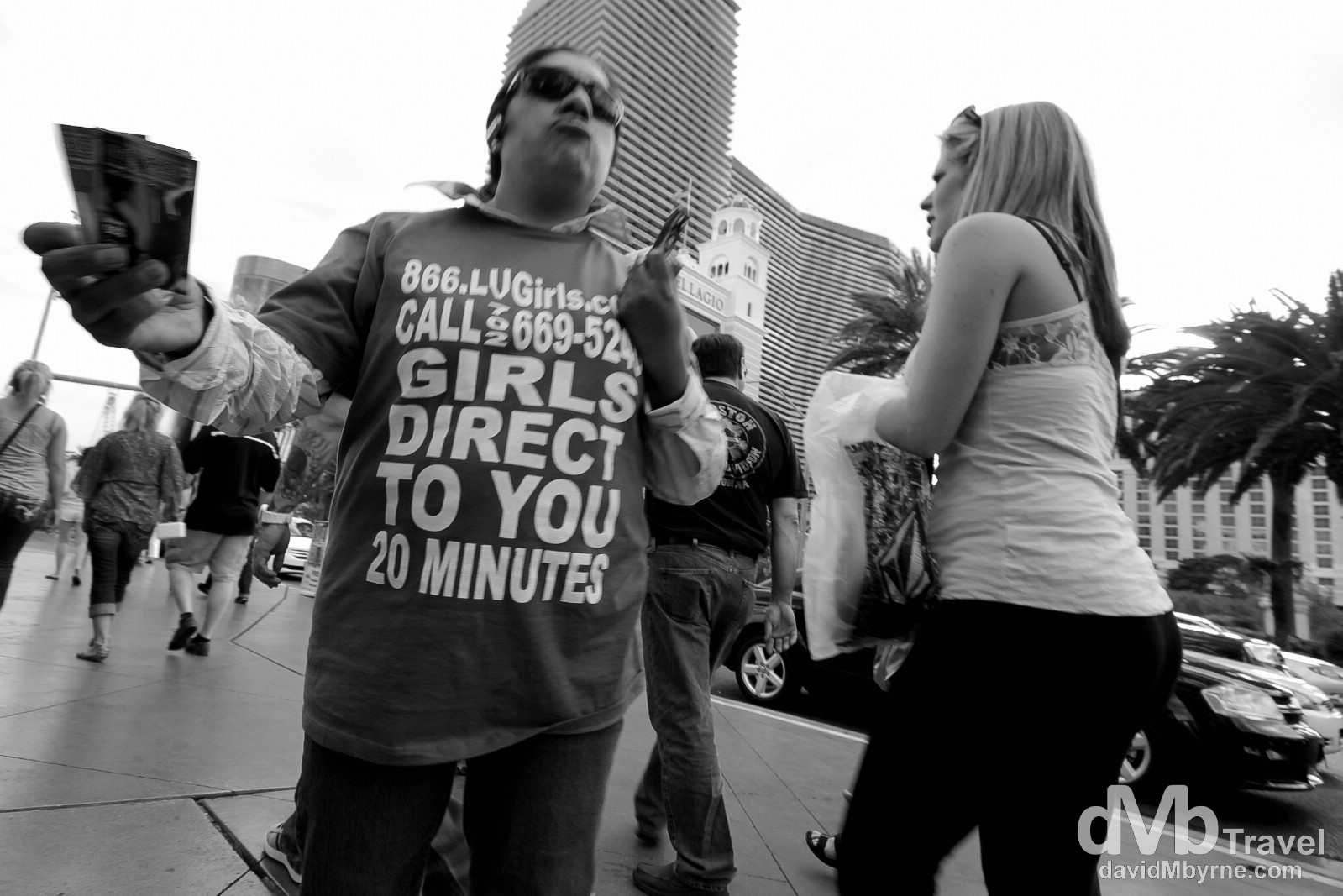 Oh Vegas. Not a place for the kids, although you’ll see plenty of them around. Las Vegas Boulevard (The Strip), Las Vegas, Nevada, USA. April 4th 2013.

Leaving Las Vegas
I’m Leaving Las Vegas today, heading for the Hoover Dam & Grand Canyon West to continue my 8-day US Southwest road trip. I’ve spent three nights in Vegas dealing with its crowds, its noise, its heat, & its money-siphoning everything. Three nights that felt like 3 weeks. Vegas is that kind of place – an adult playground full of excesses, fabricated this and superficial that. All that said, I had fun. It didn’t allow myself much sleep so it was tiring, but fun. I just won’t be in a rush to come back. One visit to Vegas is probably enough but I guess I had to pay it a second visit to fully appreciate that.