Sunset At The Grand Canyon West, Not World’s Longest, Widest Or Deepest Canyon But Still Considered The Grandest Of Them All

The Grand Canyon, one of the great tourist attractions in North America, a UNESCO listed World Heritage site & one of the 7 Natural Wonders of the World, needs little introduction. The massive steep-sided gorge (Lonely Planet calls it ‘the greatest hole on earth’), carved over a period of a several million years by the Colorado River, stretches for 445 kilometres (277 miles) from near the Arizona/Utah border to the Grand Wash Cliffs near Las Vegas. It ranges in width from about 4 miles (6.5 kilomtres) to over 18 miles (29 kilometres) & in places is over 1 mile (6,000 feet, 1,800 metres) deep. There are, of course, other canyons on planet Earth. Some are longer, some are wider, and some are even deeper. But the Grand Canyon is still considered the grandest canyon of them all. 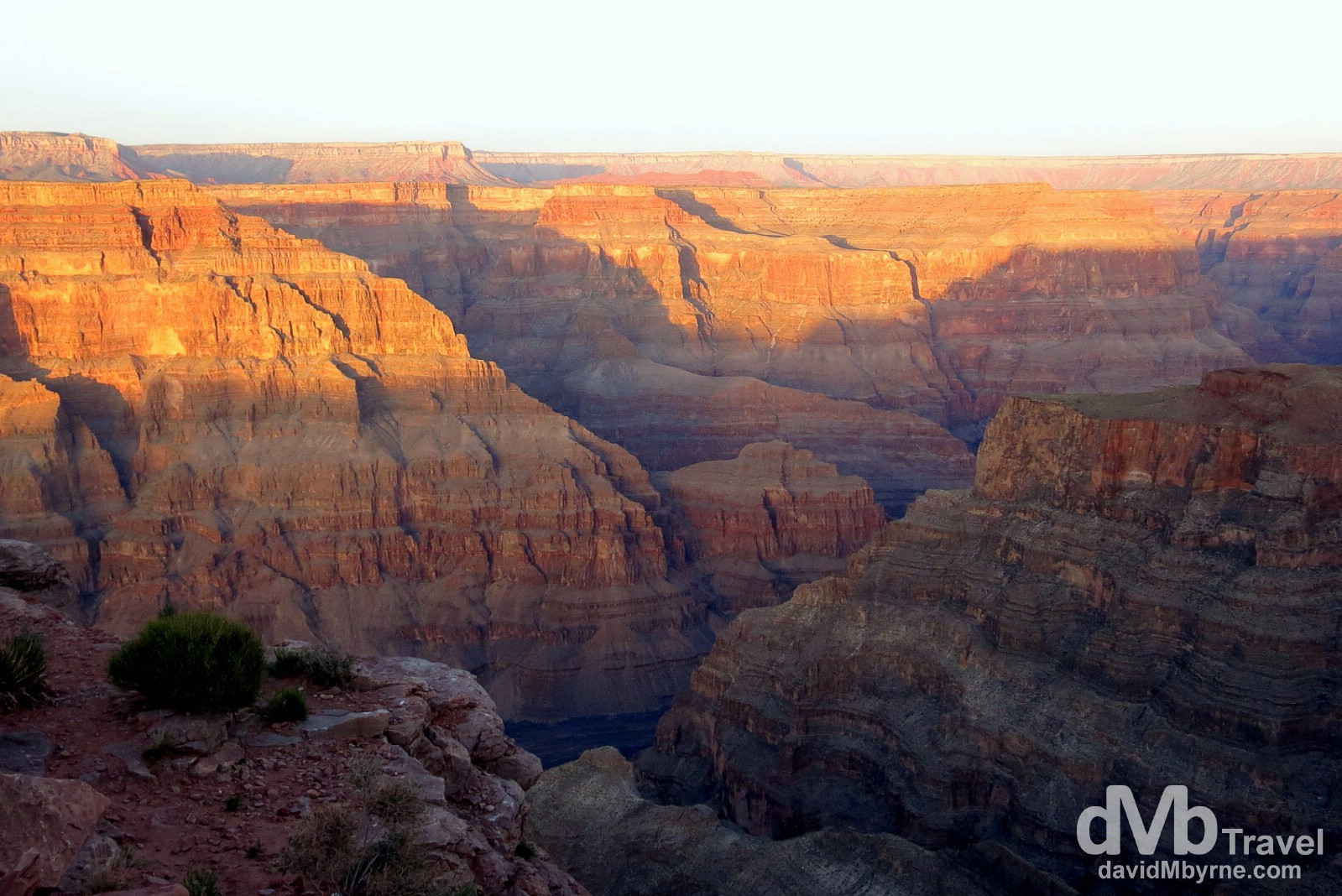 The stunningly beautiful coloured landscape of the Grand Canyon is seen here as the last of the day’s light falls on the upper walls of the canyon as seen from Eagle Point, Grand Canyon West. At the Grand Canyon, the desert environment coupled with a lack of herbaceous ground cover reveal a geologic story that is unparalleled. The Colorado River and its tributaries have carved through layer after layer of sediment as the Colorado Plateau uplifted over a period of some two billion years exposing the Earth’s history in the process. The colourful rock layers of the canyon walls show little sign of wear, the layering having been preserved almost perfectly. Nowhere else on Earth displays so many volumes of the planet’s history in such pristine condition. The resulting landscape provides visitors with some of the most magnificent and unsurpassed vistas on the planet. I could think of worse places to catch a sunset. Eagle Point, Grand Canyon West (

Carved out by the Colorado River, the Grand Canyon (nearly 1,500 m deep) is the most spectacular gorge in the world. Located in the state of Arizona, it cuts across the Grand Canyon National Park. Its horizontal strata retrace the geological history of the past 2 billion years. There are also prehistoric traces of human adaptation to a particularly harsh environment. 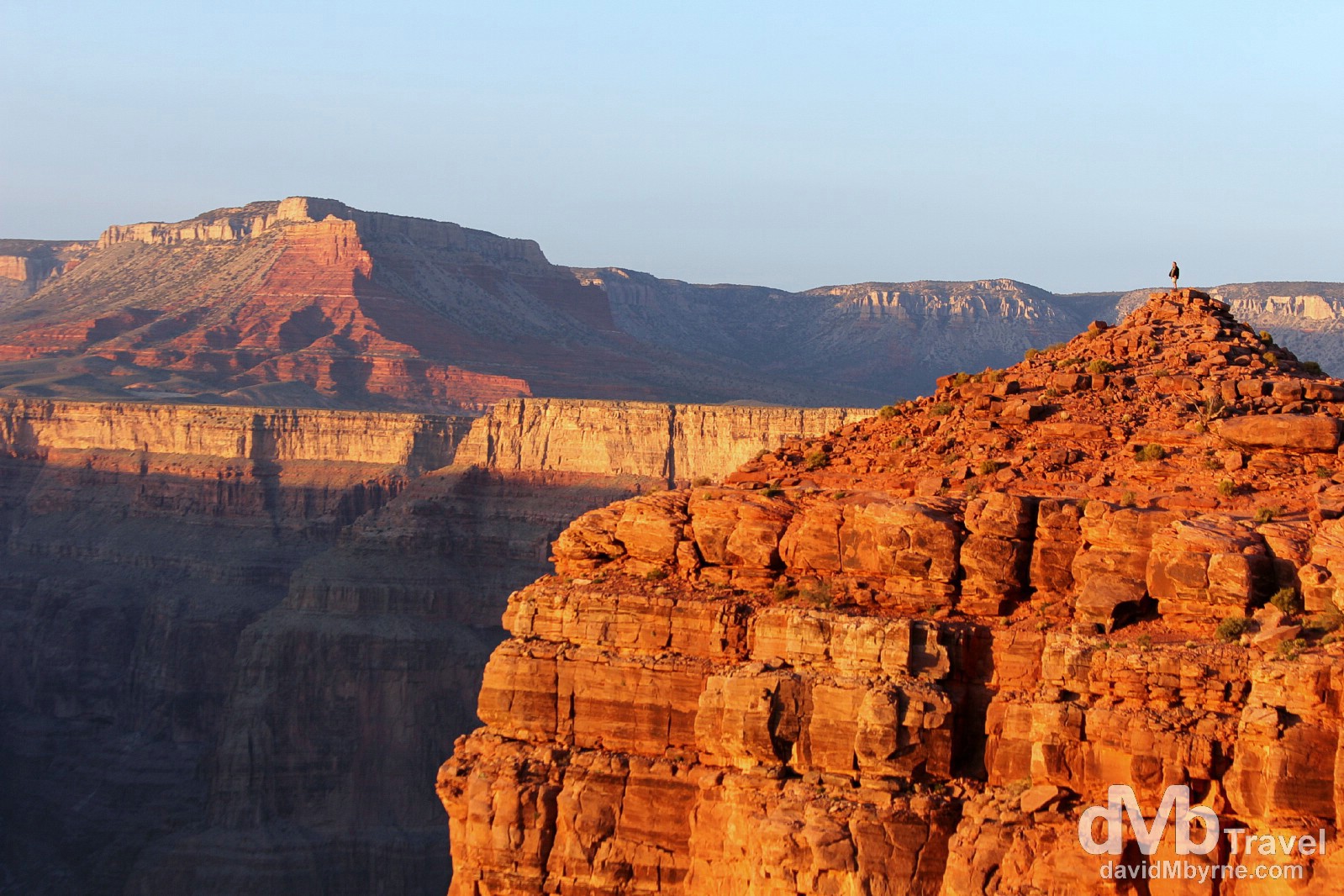 The Grand Canyon fills me with awe. It is beyond comparison—beyond description; absolutely unparalleled throughout the wide world. 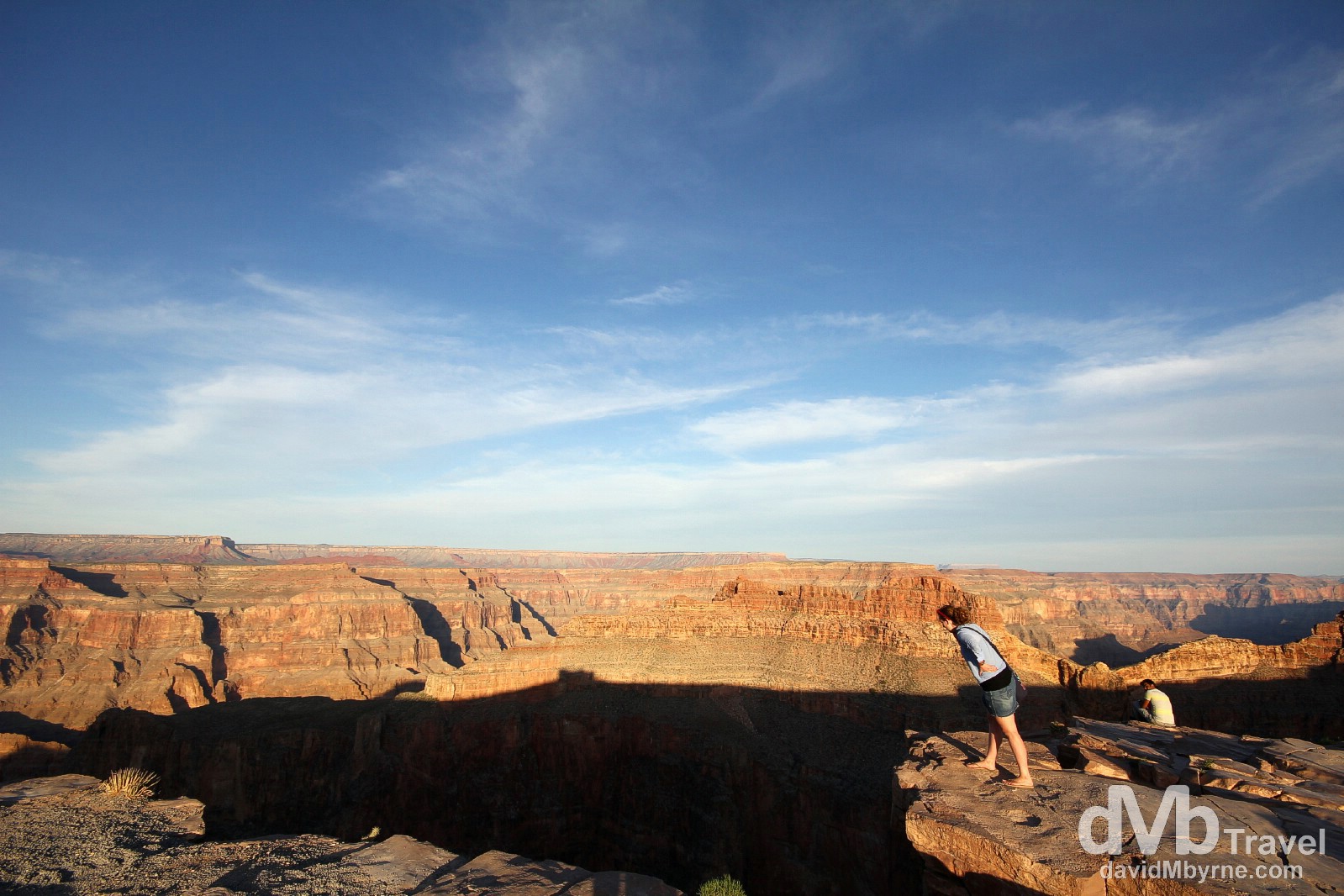 Peering into the 1-mile-deep Grand Canyon as sunset shadows encroach on the far wall of the canyon at Eagle Point, Grand Canyon West, Arizona, USA. April 6, 2013.

Grand Canyon National Park & The Grand Canyon West
The Grand Canyon is contained within and managed by Grand Canyon National Park, itself divided into two main areas – the remote North Rim and the more accessible (and therefore more crowded) South Rim (the rims are 215 miles apart by road, 21 miles by foot through the canyon, & 10 miles as the crow flies). I’d been to the South Rim back in 2003 but this time around I paid a visit to the less visited southwestern end of the canyon, the closest portion of the canyon to Las Vegas, Nevada, the so-called Grand Canyon West. This is an area not managed by Grand Canyon National Park as it is located within the borders of two Indian reservations. I vivited on this day from Las Vegas on day 6 of an 8-day US Southwest road trip. The last 16 kilometres (10 miles) of the 200-kilometre (125-mile) drive from Vegas to get to this remote corner of Arizona is on a windy dirt road (Diamond Bar Road), one I pushed my hire car hard along in a bid to get to the canyon in time for sunset. I managed it, although with not much time to spare. 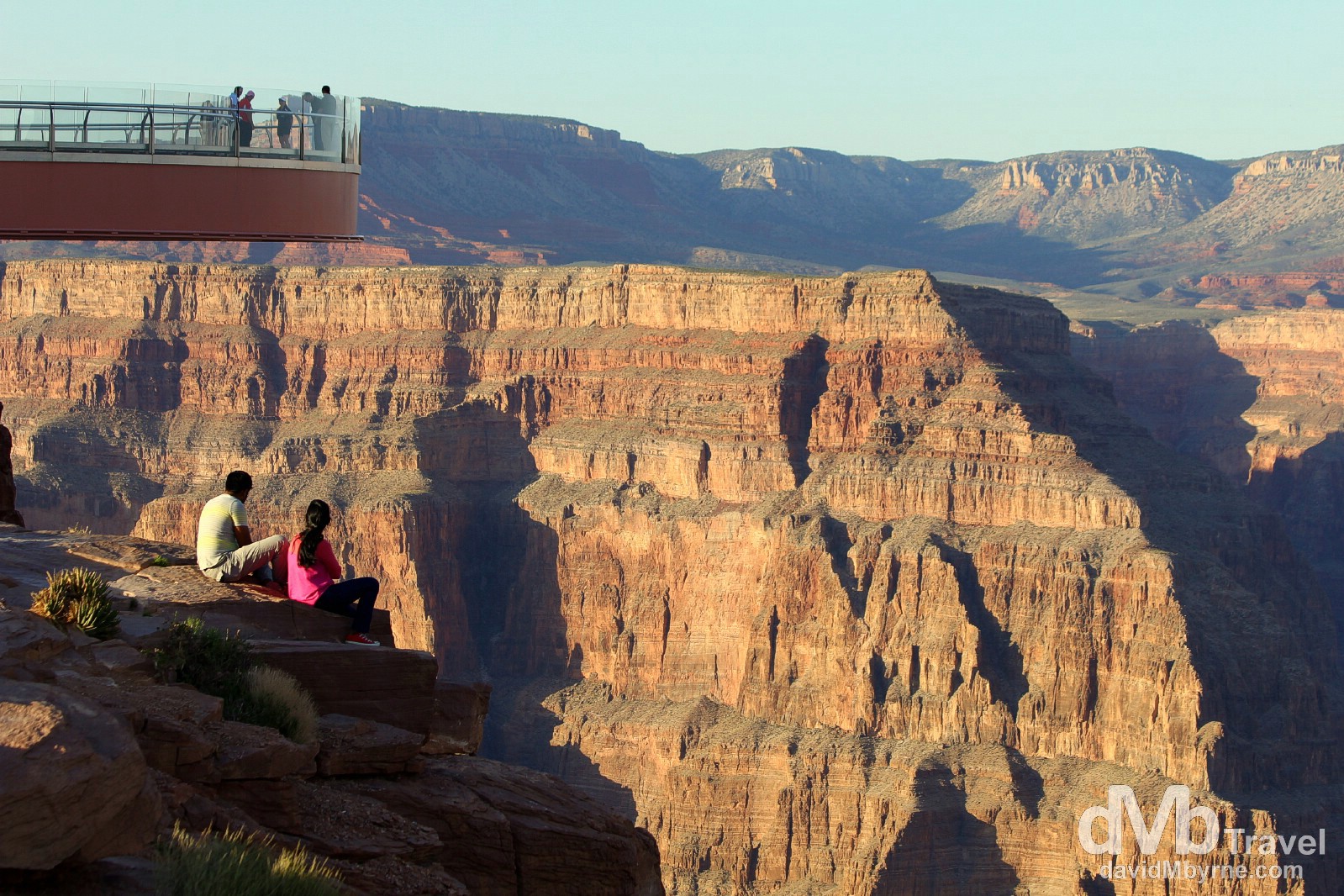 At the end of Diamond Bar Road you’ll find the Grand Canyon West’s Eagle Point, home to the The Grand Canyon West Skywalk, a transparent horseshoe-shaped cantilever walkway extending over the rim of the canyon some 4000 feet (1.2 kilometres) above the canyon floor below. Commissioned and owned by the Hualapai Indian tribe, it was completed in 2007 and reputedly cost $31 million, which might explain why one may only set foot on it by paying upwards of $90 – it’s a rather steep $30 to even get to the nature-made canyon rim itself from where these pictures were captured. And as if that doesn’t sting enough, personal photography on the Skywalk isn’t allowed. Oh no. If you want a Skywalk-supplied picture from the platform it’ll set you back an outrageous $30 per picture, or an even more outrageous $100 for all pictures captured. So if you’re visiting the Grand Canyon West best not forget your wallet. The Grand Canyon Skywalk at Eagle Point as seen from the rim of The Grand Canyon West, Arizona, USA. April 6, 2013.

Those who love it call it the canyon. The canyon. As if there were no other topographic feature on the face of the Earth. 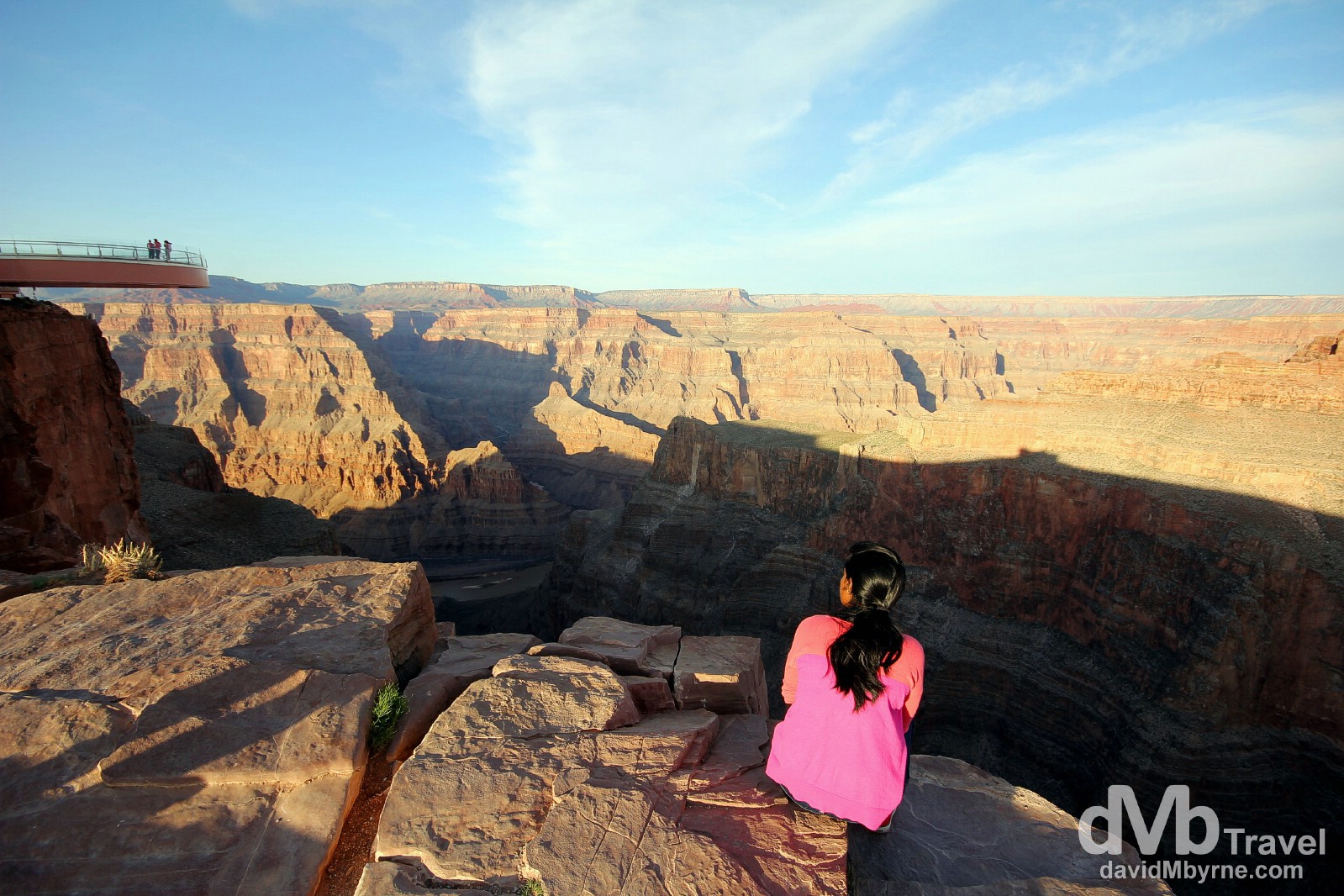 Environmentalists have described the Skywalk as an eyesore desecrating an otherwise pristine landscape. I tend to agree. Sitting by the edge of the Grand Canyon at Eagle Point, the Grand Canyon West, Arizona, USA. April 6, 2013.