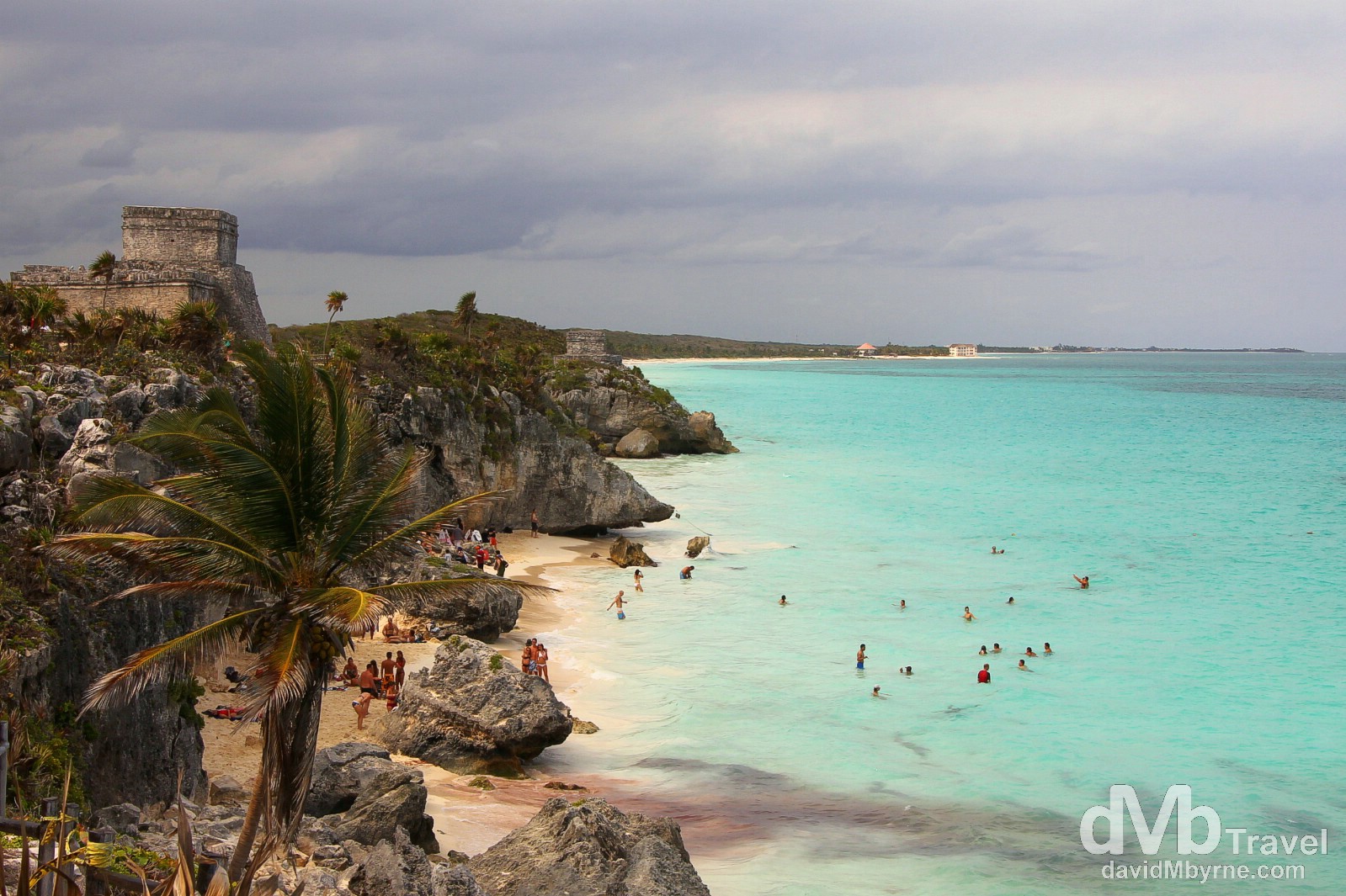 I’m coming to the end of my time in Mexico. So soon. It only feels like yesterday when I crossed over the border from San Diego to Tijuana. But it wasn’t yesterday, it was 19 days ago. Anyway, I digress.

Tonight is my second & last night in Tulum, my penultimate stop in Mexico, some 2 hours down the coast from Cancun, my last stop, and 2 hours closer to Belize, my next. Aside from the obvious fact that I came here because it’s en route to Belize, I also came here to explore a few more Mayan ruins. Two more to be precise, the Mayan ruins at Tulum & Cobá, both of which are easily accessible from the backpacker friendly town of Tulum, where I’m based. More Mayan ruins? Yep, I guess before arriving here I either had an inert desire to stare and more centuries-old piles of rock (& I say that in jest knowing in truth that this Mayan lark intrigues me) or I felt an obligation while in this part of the world to do so. Either way I’m just back from Cobá, 24 hours after returning from Tulum. Both, & in very different ways, are well worthy of a visit & , dare I say it, offer a much better Mayan experience than does a visit to the New7Wonder blunder that is Chichén Itzá.

The Mayan site in Tulum, widely considered to be the last city built and inhabited by the Mayans prior to the arrival of the Spanish, are just a little bit different from the Yucatan Mayan city norm – this particular Mayan site came complete with sea breezes & amazing ocean views.

Templo Dios del Viento (God of Winds Temple) of the Tulum ruins high on a cliff overlooking the Caribbean Coast. These ruins were occupied from around 1200 AD – 1521 AD, meaning they were one of the very few Mayan sites to be still occupied when the Spanish arrived in 1517 – & they were inhabited for some 70 years after the Spanish arrival, their ultimate demise being commonly attributed to Old World diseases introduced by the overseas settlers. Needless to say the ruins are one of the most beautiful coastal Mayan sites in the region, presiding as they do over a rugged coastline & a strip of beach fronting the inviting green-and-turquoise water of the Caribbean Sea. One of the earliest resort destinations on the planet, the Mayans used it as a centre for relaxation, worship and solitude. It was also, given its coastal position, an important commercial enclave between Mayan maritime & land routes, linking Central Mexico with as far south as Honduras. The first mention of the city was in 1518 in a text written by Juan Diaz who was part of a Spanish expedition to the region. These days it is the third most visited archaeological site in Mexico, helped in no small way by its proximity to Cancun, only some 130 kilometres up the coast. Tulum (

The city was known as Zama, or dawn, due to its proximity to the place where the first rays of the rising sun hit the region. It was port trading community in a privileged location, and an active participant in the redistribution of local and foreign products coming from as far away as Central America, the Pacific & the Gulf Coast, and Central Mexico via sea routes, rivers and land.

Its daily life was related to politics, magic-religious rituals, the arts and astronomical observations, especially of the planet Venus – the morning & evening star -, representative of Kukulkan-Quetzalcoatl.

It’s ramparts allowed the control of activities inside the city as well as safeguarding its residents and marking the boundary between the elite and the ordinary people who lived outside the great walls.

Tulum was contemporary to Chichen Itza and Mayapan, and when the latter two states fell, it consolidated its position, paving the way for its greatest period of expansion.

Its decline began at the time Hispanic navigators arrived on its shores and islands; from then on, a certain cultural cohesion was attained that has prevailed until the present time.

One of the last geological formations on our planet: The formation of a great culture.

The ground on which you stand is relatively young; it was formed 2 million years ago when a good part of the ocean floor emerged, forming the Yucatan Peninsula. Its surface is formed by limestone; when it is dissolved by the force of the water, it gives rise to pool called cenotes; water holes, or aguadas; caverns; hallows known as rejolladas; and alkaches, natural lowlands flooded with water in the rainy season.

Just off the shore of Yucatan is a low coral reef running all along the Caribbean coastline, the second longest in the world (and one that is still forming).

My final set of Mayan ruins (in Mexico at least) was at Cobá, about 40 kilometres from Tulum. One of the less developed Mayan ruin sites & set deep in the steamy jungle, there’s a very Indiana Jones feeling to exploring this site, the highlight of which was watching fellow tourists scale Coba’s primary structure, the 42-metre (138 feet) high Nohoch Mul (Big Mound, a.k.a the Great Pyramid). I scaled it too, of course. 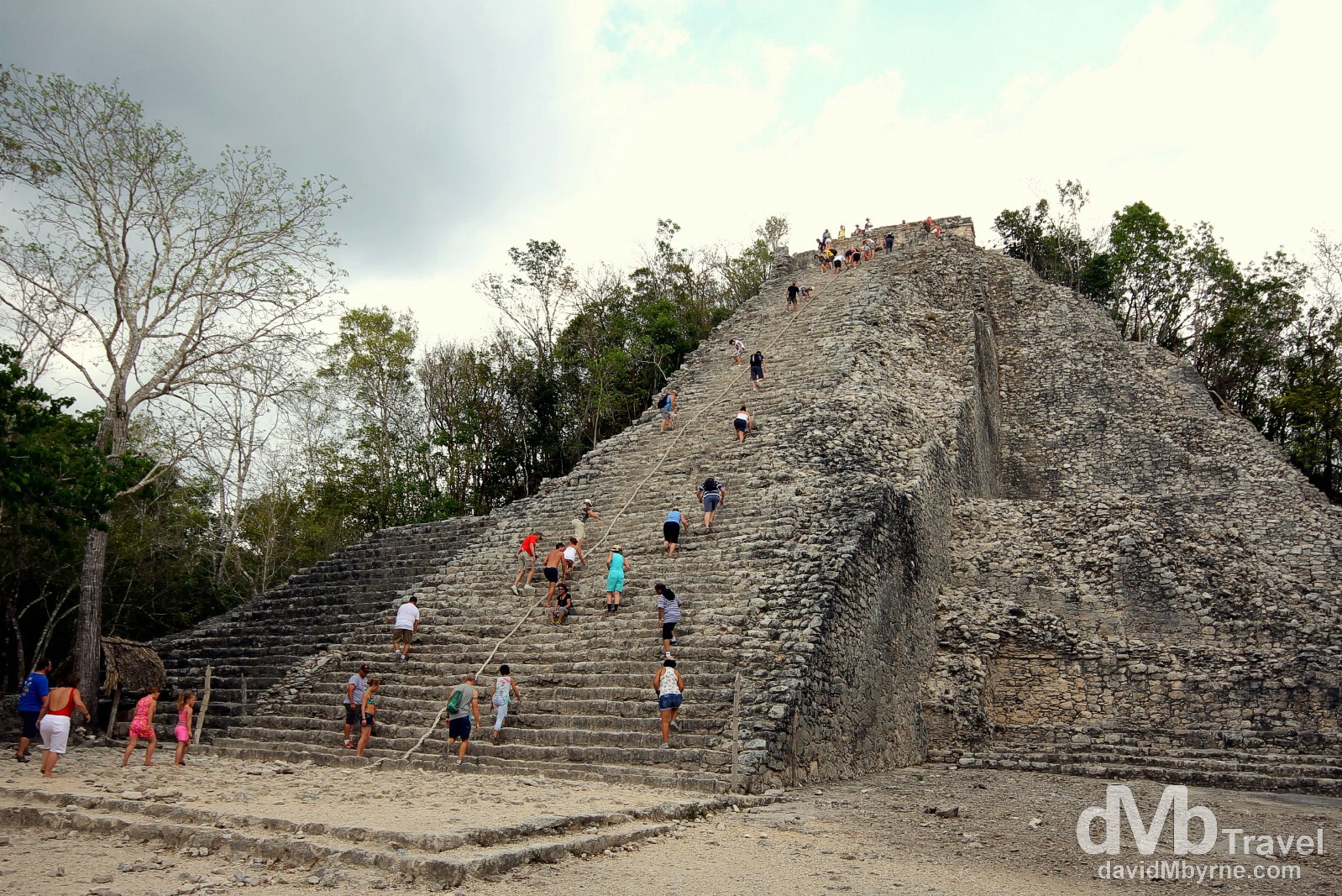 The Cobá site is large (70 km²), only a small portion of which, 5%, has been cleared from the jungle and restored by archaeologists. The Nohuch Mul pyramid is 42 meters (138 feet) high and is the tallest Mayan structure on the Yucatán Peninsula. But there are several other buildings/ruins of interest in Cobá including temples, the requisite Mayan ball court, an ancient gallery of carved stellae, & an astronomical observatory. One of the most archaeologically interesting features of Cobá is its network of elevated roads that emanate out from the city towards other Mayan cities. These roads, called sacbeoob, are thought to have been the Mayan equivalent of an road/highway system enabling easy transportation throughout the Mayan world. The most notable example is the so-called Sacbeoob 1 which is 100 kilometres long and reaches the site of Yaxuna, near Chichen Itza. 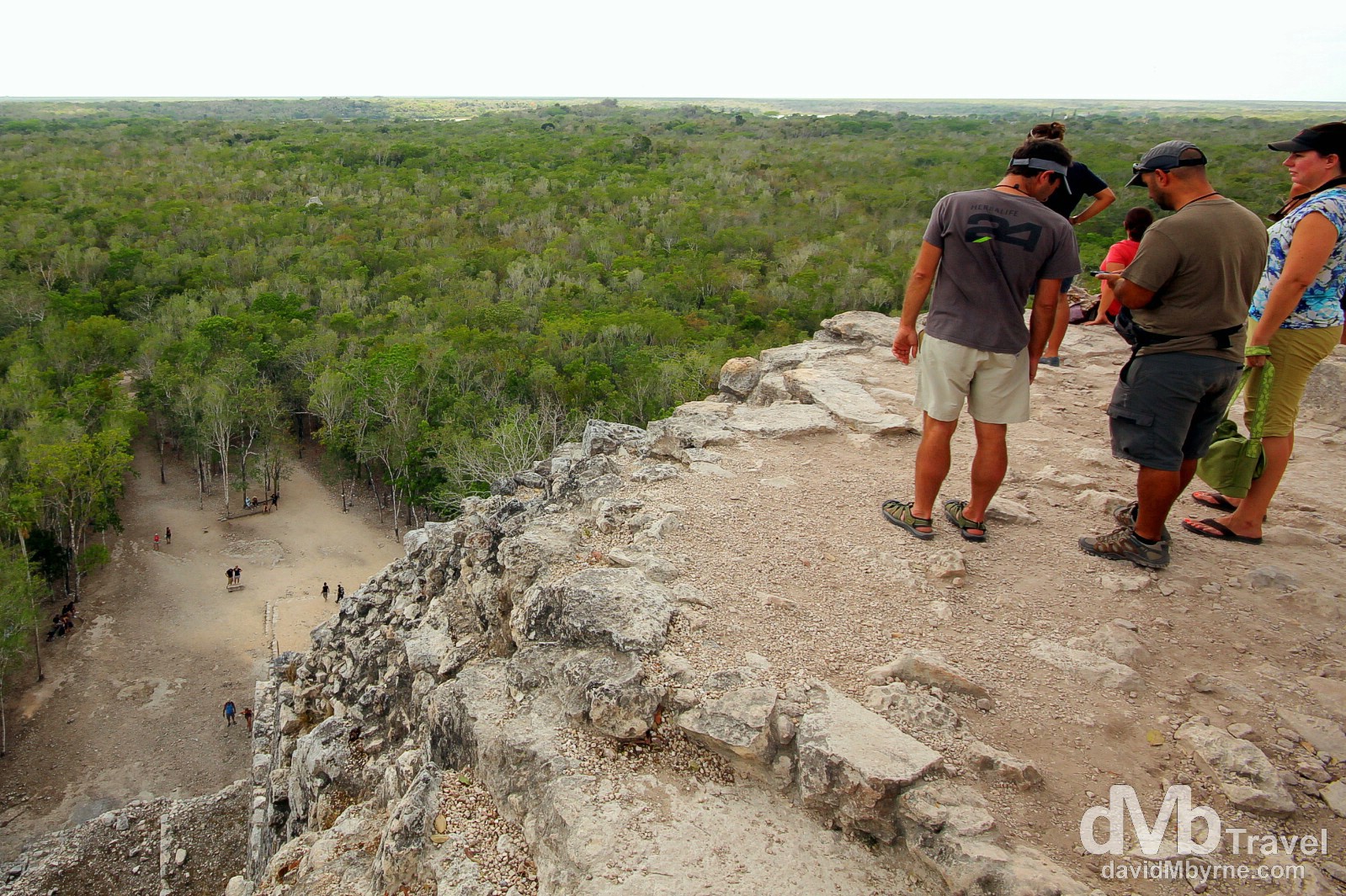 The view of the surrounding jungle, a vast flat sea of green, from atop Cobá’s Nohoch Mul (Big Mound, a.k.a. Great Pyramid). Cobá is estimated to have had some 55,000 inhabitants (and possibly significantly more) at its peak of civilization. The bulk of its major construction seems to have been made in the middle and late Classic period, about 500 to 900 AD, with most of the dated hieroglypic inscriptions from the 7th century. However, Cobá remained an important site in the Post-Classic era and new temples were built and old ones kept in repair until at least the 14th century, possibly even as late as the arrival of the Spanish in 1517. Yucatan Peninsula, Mexico. May 7th 2013.

The city of Cobá covers and area of around 70 kms., and the principle groups of buildings are situated near the lakes of Cobá and Macanxoc.

It has an important network of white roads (sacbeoob) of varying lengths, which connect it with other building groups and pre-Hispanic settlements. The major roads or causeways were built between 600 and 800 AD. During this same period of time, the stelae of Cobá were erected. These were sculptured stone monuments on which the basic events of the ruling classes were registered. The inhabitants, who did not belong to this social class, lived on the outskirts of the central zone and their dwelling did not differ much from the ones inhabited by present day Mayans. It is estimated that the population of Cobá in the 8th century was approximately 55,000 inhabitants. Between 800 and 1100 AD, construction development reached its peak. The classical architectural style of Cobá resembles more that of the Peten of Guatemala than that of northern Yucatan. By the time the Post-Classic period, Cobá lost its superior force and other cities from along the coast, such as Tulum, Xcaret, Tankah & El Ray, began to flourish.