I‘m on a bit of a UNESCO World Heritage site crusade on this, my latest trip to South Korea. I didn’t have much time to sightsee when here this time (I rarely do) and given my history with Korea I didn’t have much I wanted to see anyway. That said, there were still a few sites/attractions – three actually, & all UNESCO World Heritage listed sites – lingering on my Korea must-see list that I was determined to visit on this trip, mainly because I’m convinced that the end of this decade & counting love-in I have with the country can’t be too far away (it has to end sometime). I’d already managed to visit the Changdeokgung Palace Complex & Jongmyo Shrine, both in Seoul, prior to today, my last day in the country for this visit & a day on which I found myself taking a leisurely Sunday afternoon stroll atop the walls of the impressive Suwon Hwaseong Fortress. It seems like I left the best for last. 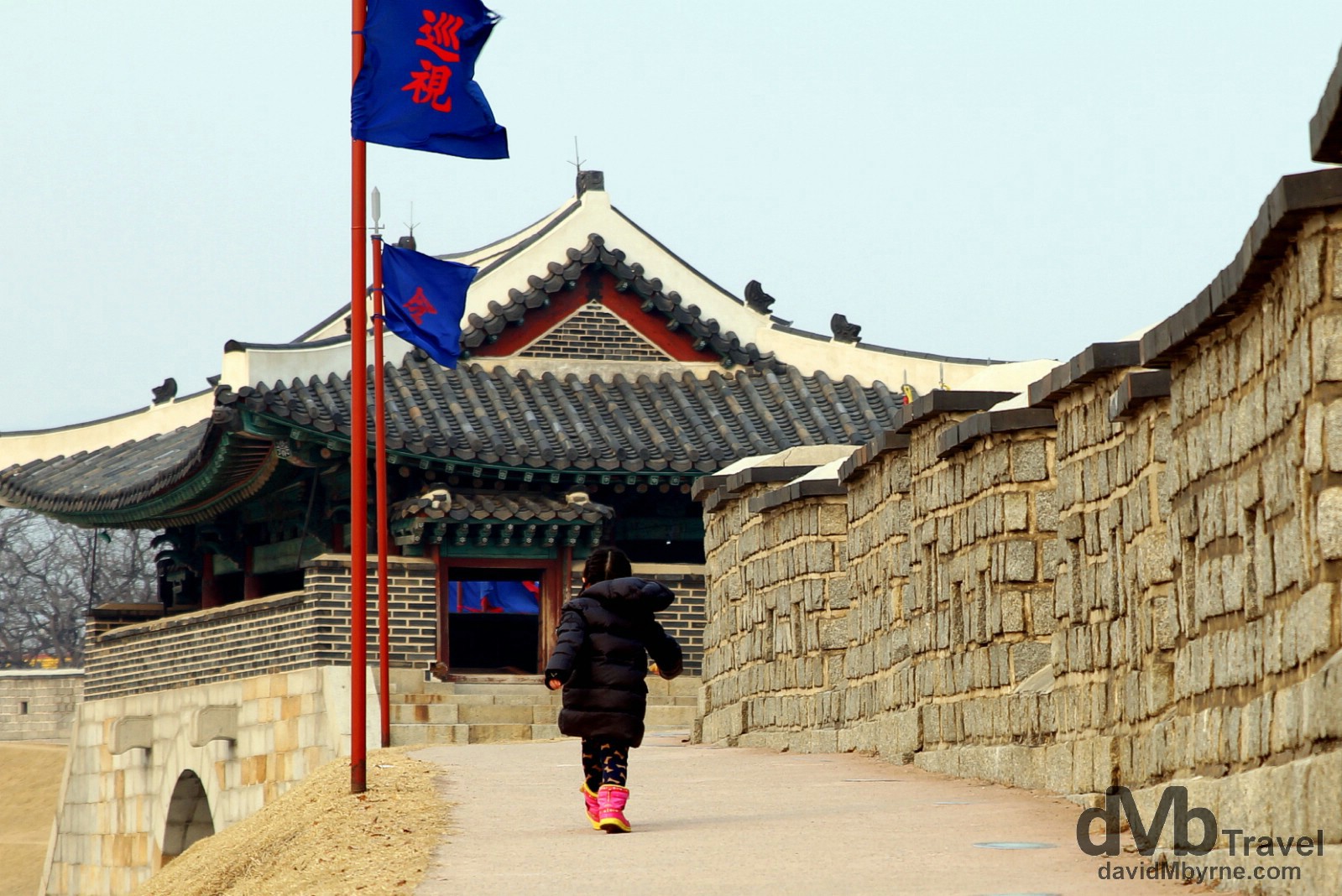 Suwon Hwaseong Fortress
Hwaseong is a wall surrounding the much of central Suwon, about 50 kilometres south of the South Korean capital of Seoul. The fortress, requiring some 700,000 man-hours of effort, was built over a two year period from 1794 to 1796 by King Jeongjo of the Joseon Dynasty (1391-1910) to house and honour the remains of his father Prince Sado. The main reconstruction of Hwaseong was in the 1970s although it has undergone periodic maintenance since then & today the whole 5.74 kilometre wall, containing 48 structures in total, is in great condition and can easily be walked. Classed by UNESCO as ‘the pinnacle of 18th century military architecture’, it was designated as a World Heritage site in 1997.

Hwaseong Fortress represents the pinnacle of 18th century military architecture, incorporating the best scientific ideas from Europe and East Asia brought together through careful study by scholars from the School of Practical Learning. It demonstrates important developments in construction and the use of materials that reflects the interchange of scientific and technical achievements between the East and West. The fortress had a great influence on the development of Korean architecture, urban planning, and landscaping and related arts. 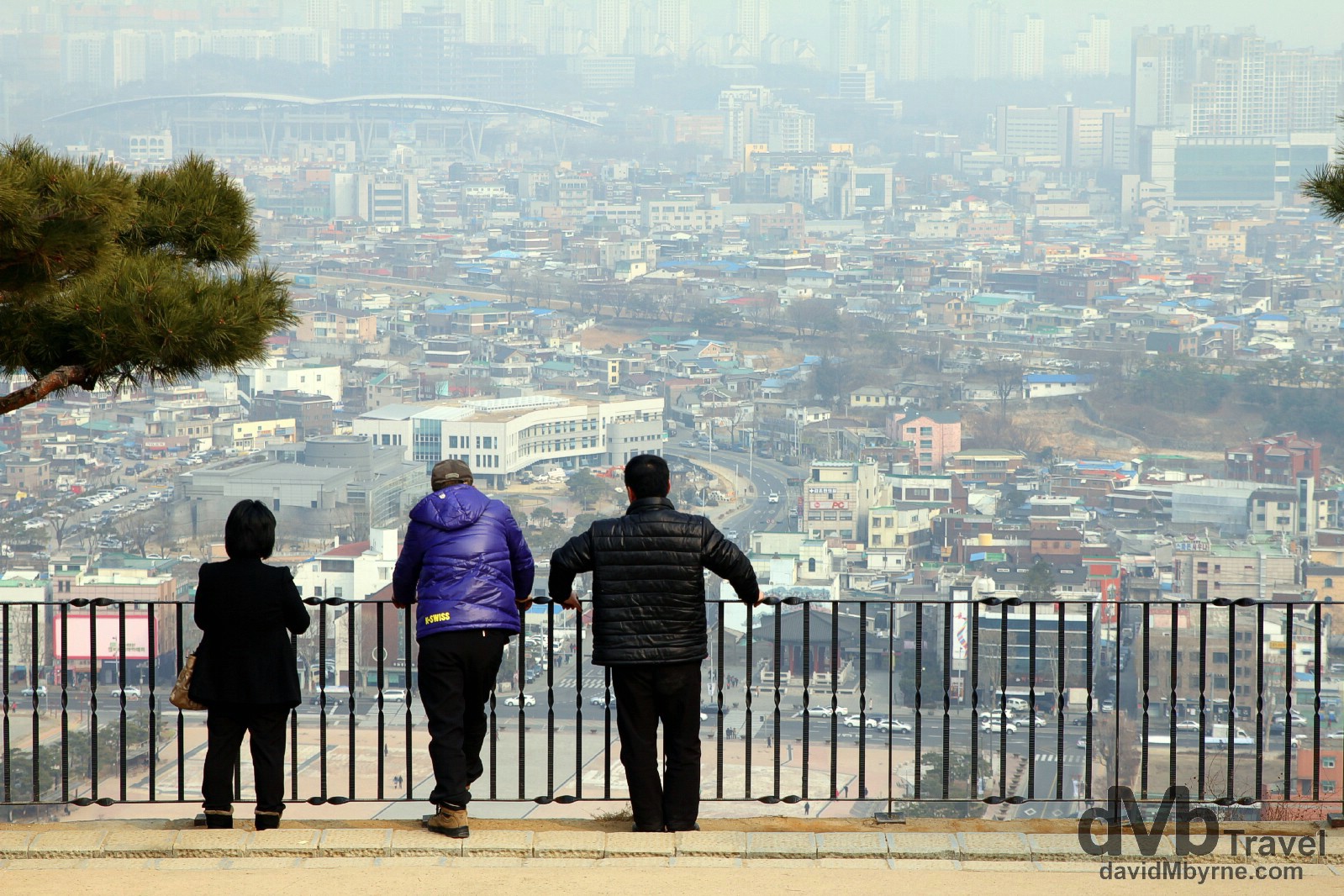 The walls so Hwaseong follow the topography of the land with the height of the wall varying – the walls are lower on high land and higher on low land. This is a picture of visitors taking in the view to the east of the fortress and beyond to Suwon as seen from the highest point of the fortress atop Paldansan (Mt. Paldan). Suwon Hwaseong Fortress in Suwon, South Korea. February 23rd, 2014.

Hwaseong was laid out according to the precepts of an influential military architect of the period. The fortress has over 48 structures, including 4 main gates (North, South, East & West), floodgates (Suwon’s main stream flows through the fortress), watchtowers, gun towers, sentry posts, command posts, pavilions, guard platforms, secret gates, observation towers, crossbow platforms & turrets. This is Seojangdae, the West Command Post, atop Paldansan (Mt. Paldan). It was built in 1794 and survived until being destroyed by fire in 1996. It was reconstructed only to be attacked by an arsonist in May 2006 with the present structure, the result of a $6 million reconstruction, dating to 2007. Suwon Hwaseong Fortress, Suwon, South Korea. February 23rd, 2014. 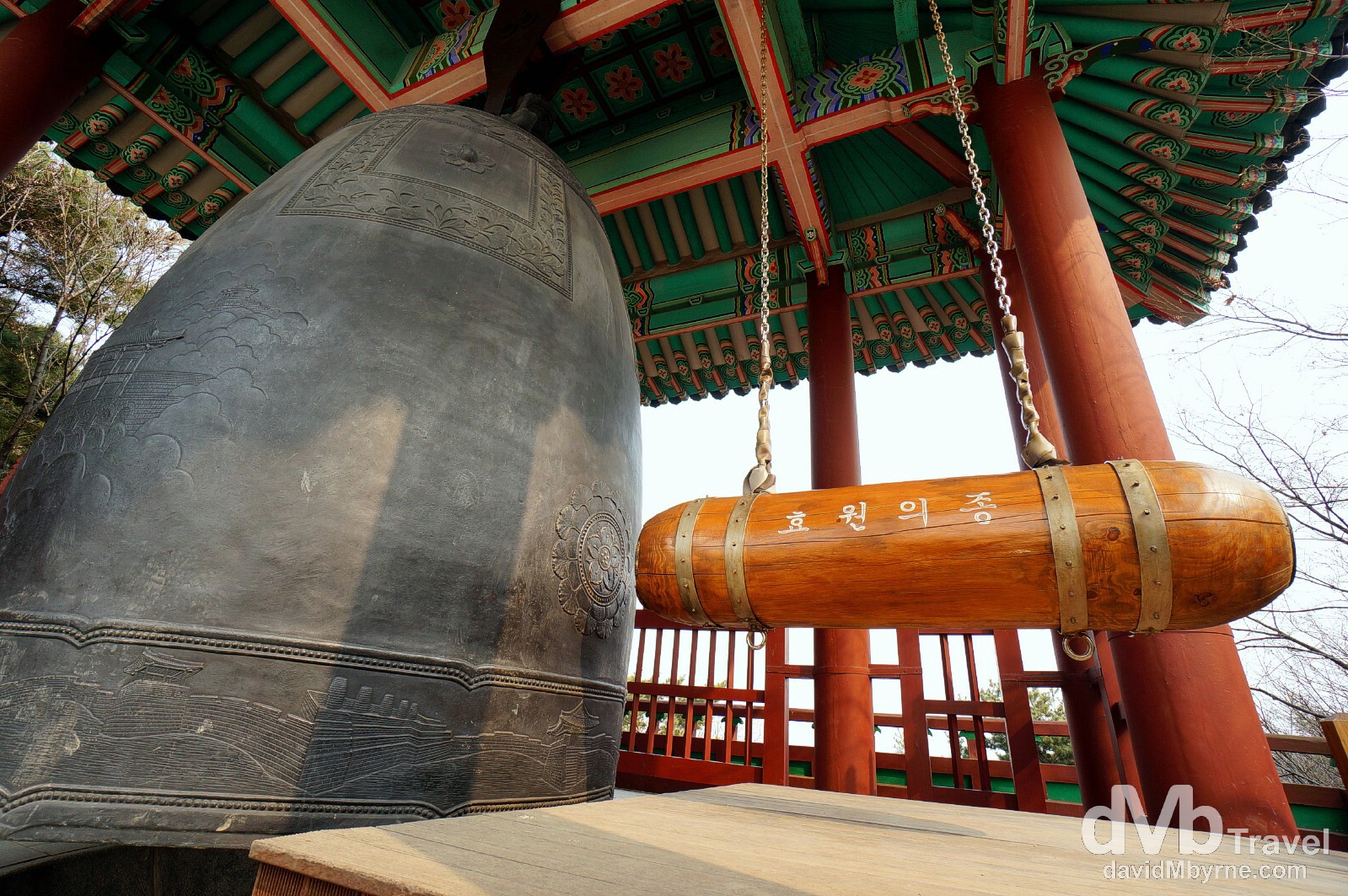 The Bell of Hyowon sits near Paldansan (Mt. Paldan) & according to the fortress pamphlet ‘represents Suwon as a city of filial piety.’ Suwon Hwaseong Fortress, Suwon, South Korea. February 23rd, 2014. 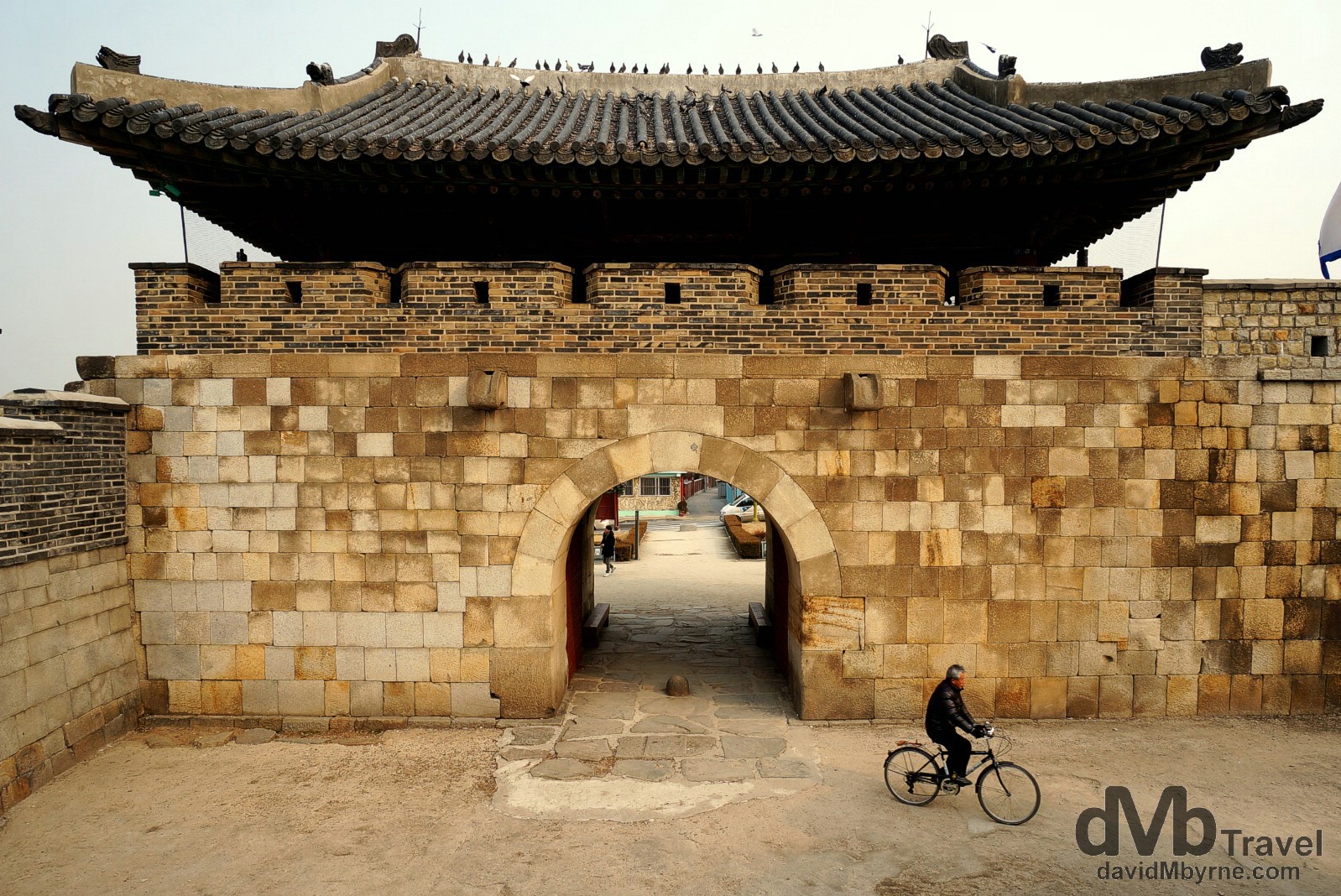 Cycling through a section of the Suwon Hwaseong Fortress in Suwon, South Korea. February 23rd, 2014. 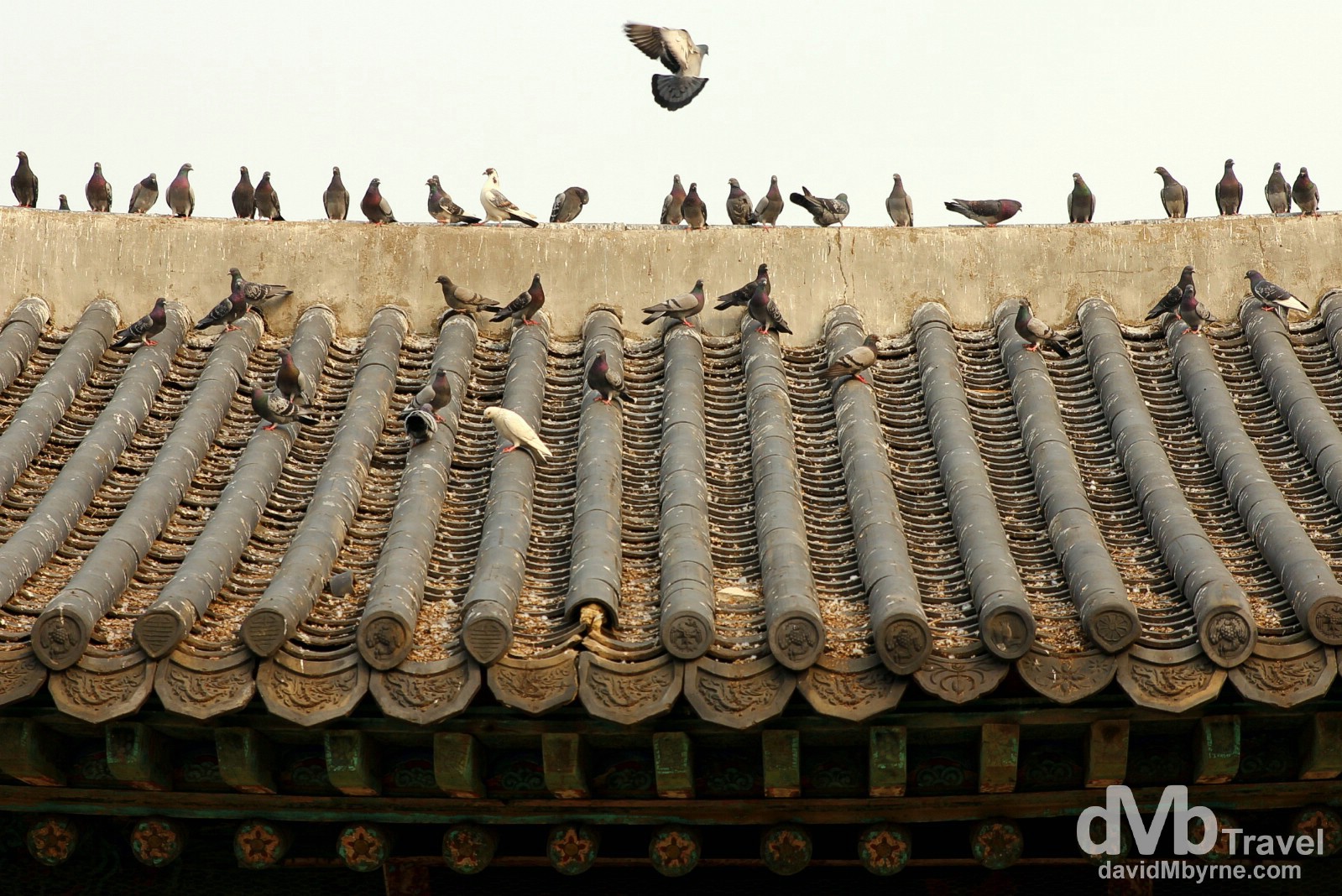 Pigeons on a roof of a section of the Suwon Hwaseong Fortress in Suwon, South Korea. February 23rd, 2014.