The Jongmyo Shrine, in the Jongno district of the South Korean capital of Seoul, is a shrine complex, the last of its kind in Asia, the supreme shrine of the state where tablets of royal ancestors, typically kings & queens, are enshrined & where memorial services are still to this day performed in their honour.

The shrine was first built between October 1394 & September 1395 by King Taejo, the founder of the Joseon Dynasty (1391-1910), shortly after he designated Hanyang (present-day Seoul) as the capital of his new dynasty. It was built prior to the city’s Gyeongbok Palace, the main dynastic palace in Seoul, and sits to the east of the palace to conform to Confucian philosophy – its location form & layout all adhere to principles devised specifically for shrines. When a king or queen died, mourning at Gyeongbok Palace typically lasted for a two or three year period after which memorial tablets of the deceased would be moved to be enshrined here at Jongmyo.

The Jongmyo Shrine complex has 5 buildings. The first to be built & the most important & largest of the buildings of the present-day shrine complex is Jeongjeon, a long wooden building fronted by an expansive 69 metre by 109 metre cobbled stone yard/platform. This is a view from across the platform showing the Sillo, a slightly raised path used exclusively, as per Confucian beliefs, for the spirits of the deceased – the path leads all the way from the Jongmyo Shrine complex entrance to the steps of the raised platform on which Jeongjeon sits. Jongmyo Shrine in Seoul (

Tombs & Shrines
According to Confucian belief, the spirit separates from the body upon death & goes to heaven while the body returns to earth. For this reason, Koreans separately built tombs, for the body, & shrines, for the spirit – it was here at the shrine that they stored spirit tablets & made offerings to worship their ancestors. 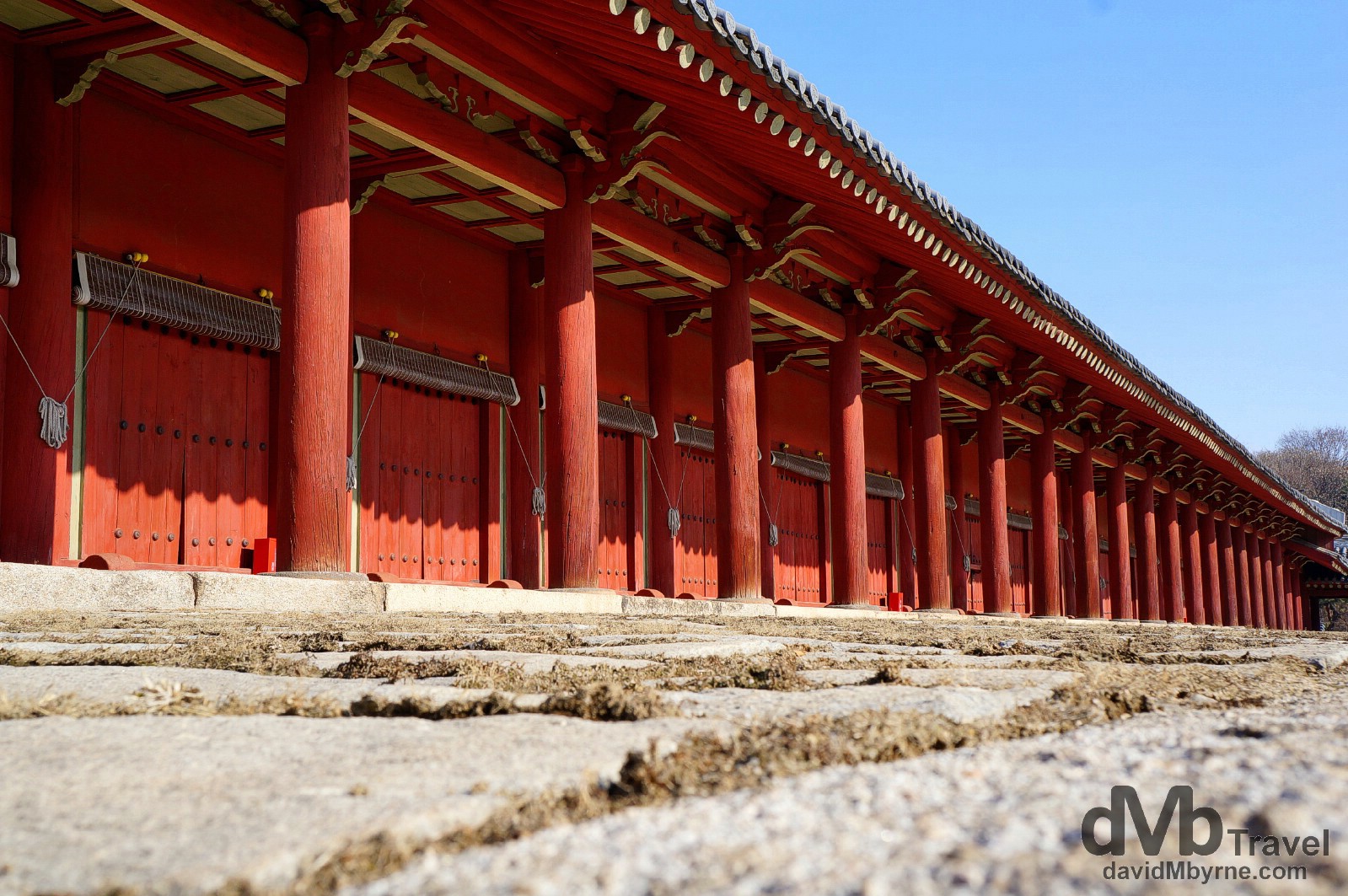 Behind its large red double doors, a.k.a. Gates to Spirit Chambers, Jeongjeon has 19 chambers housing 49 spirit tablets of deceased royalty including the memorial table of the aforementioned King Taejo. With the passage of time, Jeongjeon needed to be enlarged several times to facilitate the enshrinement of more kings & queens, until such time as it could not be extended any further necessitating the need to construct other buildings within the shrine complex. Jongmyo Shrine in Seoul, South Korea. January 18th, 2014.

Like all buildings in Seoul, the Jongmyo Shrine was burnt down during the Japanese invasion of 1592. The shrine as seen today dates to 1608, quite old for Seoul – unlike most other historic structures in the city the shrine survived the 1910-1945 Japanese occupation of Korea (the Japanese thought the shrine to be cursed & thus they avoided it), not to mention the 1950-1953 Korean War. 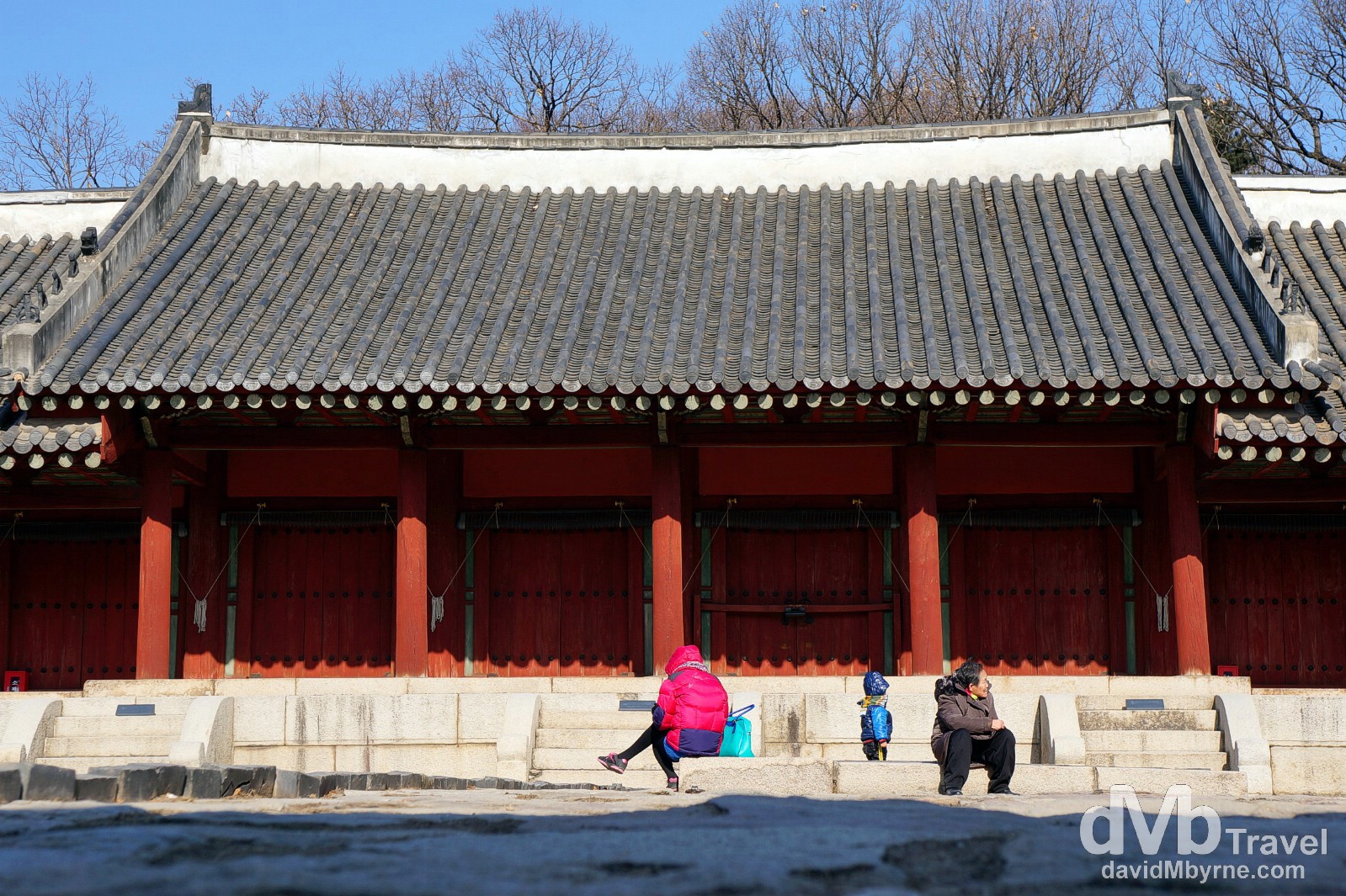 Inside the grounds of Yeongnyeongjeon. The second largest of the Jongmyo Shrine buildings was built in 1421 when further expansion of Jeongjeon was not possible. Smaller & more intimate than Jeongjeon, it has 16 chambers housing 34 spirit tablets. None of the Jongmyo shrines facilities are lavishly adorned, underlining the solemnity of the whole Jongmyo Shrine complex. Jongmyo Shrine, Seoul, South Korea. January 18th, 2014.

Jongmyo Shrine is an outstanding example of the Confucian royal ancestral shrine, which has survived relatively intact since the 16th century, the importance of which is enhanced by the persistence there of an important element of the intangible cultural heritage in the form of traditional ritual practices and forms.

Among the Confucian states in Asia where similar shrines were established, only Korea has preserved its royal shrine & only in Korea do they continue to perform royal ancestral rites, with the largest of the ceremonial rituals taking place each year on the first Sunday in May. As a result of this the Jongmyo Shrine was inscribed on the UNESCO World Heritage list of protected sites in December 1995, with UNESCO going on to cite it in 2001 as a Masterpiece of Oral & Intangible Heritage of Humanity.