The South Korean Capital & The Self-Titled Soul Of Asia

“This particular weekend was a good weekend to be in Seoul as the city was in the midst of Korean Independence Day (August 15) celebrations – Korea achieved their liberation from Japanese imperial rule on that date in 1945.”

I‘m back in South Korea, back in its capital of Seoul. I like this place. This is my second trip to the Land of the Morning Calm having first visited some 8 months ago. It was winter then, I was at a loose end, & I decided to give teaching a go. Only temporary mind – for 4 weeks. And that’s exactly why I’m back this time. Except this time I plan on seeing a bit of the country in the process – it was too cold to do much of any sightseeing last time out. Not that that – the cold – is a problem now; Korean summers are hot, muggy, & wet. Very wet it seems. I battled the Seoul rain for 3 days when I first arrived in the country 4 weeks ago. I had better weather this past weekend when I escaped the workplace to pay another visit to the Korean capital. Here’s a selection of pictures I captured in the city during both visits, highlighting some of what Seoul has to offer. 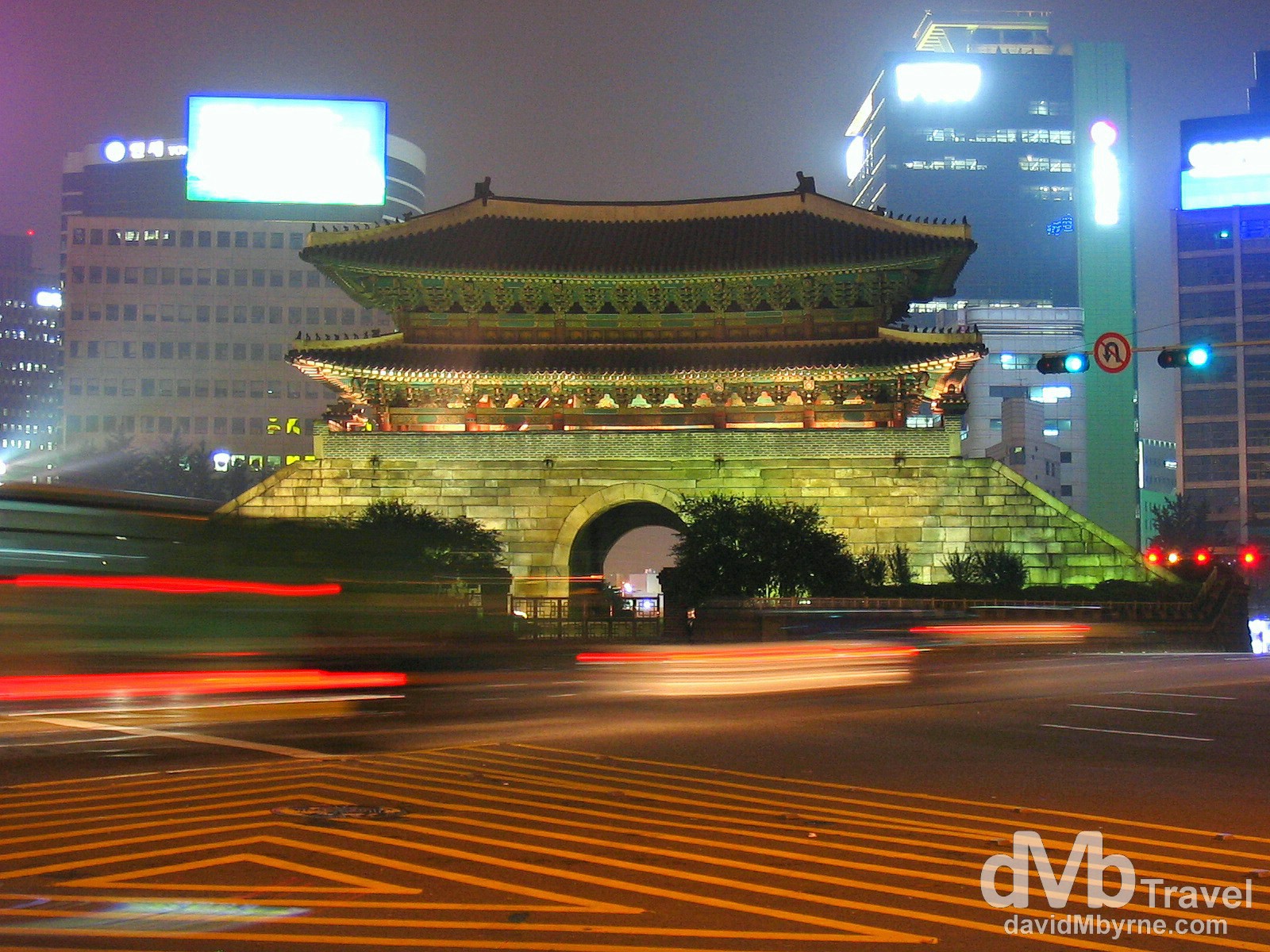 Namdaemun (Great Southern) Gate is, or was, the southern gate, one of eight gates total & one of the three major gateways through the original 18 kilometre fortress walls that surrounded Seoul during the Joseon Dynasty (1392-1910), walls that were demolished by the Japanese Government after they annexed the country in 1911. The pagoda-style gateway is currently the oldest wooden-built structure remaining in Seoul & is designated as the First National Treasure of South Korea. Construction began in 1395, was finished in 1398 and went through renovations in 1447, 1479 and 1962, following damage sustained in the Korean War. This picture was taken on my first night in the city during a brief break in heavy downpours. Seoul (

UPDATE || May 5, 2013
Tragically the 550-year-old Namdaemun Gate was destroyed by an arson attack in February of 2008. A 3-year, KRW20 billion (approximately €14 million) restoration project to rebuild the historic gate got underway in February of 2010, with the newly restored gate, no longer the oldest but now the newest wooden structure in Seoul, being unveiled to the public today, May 5, 2013. 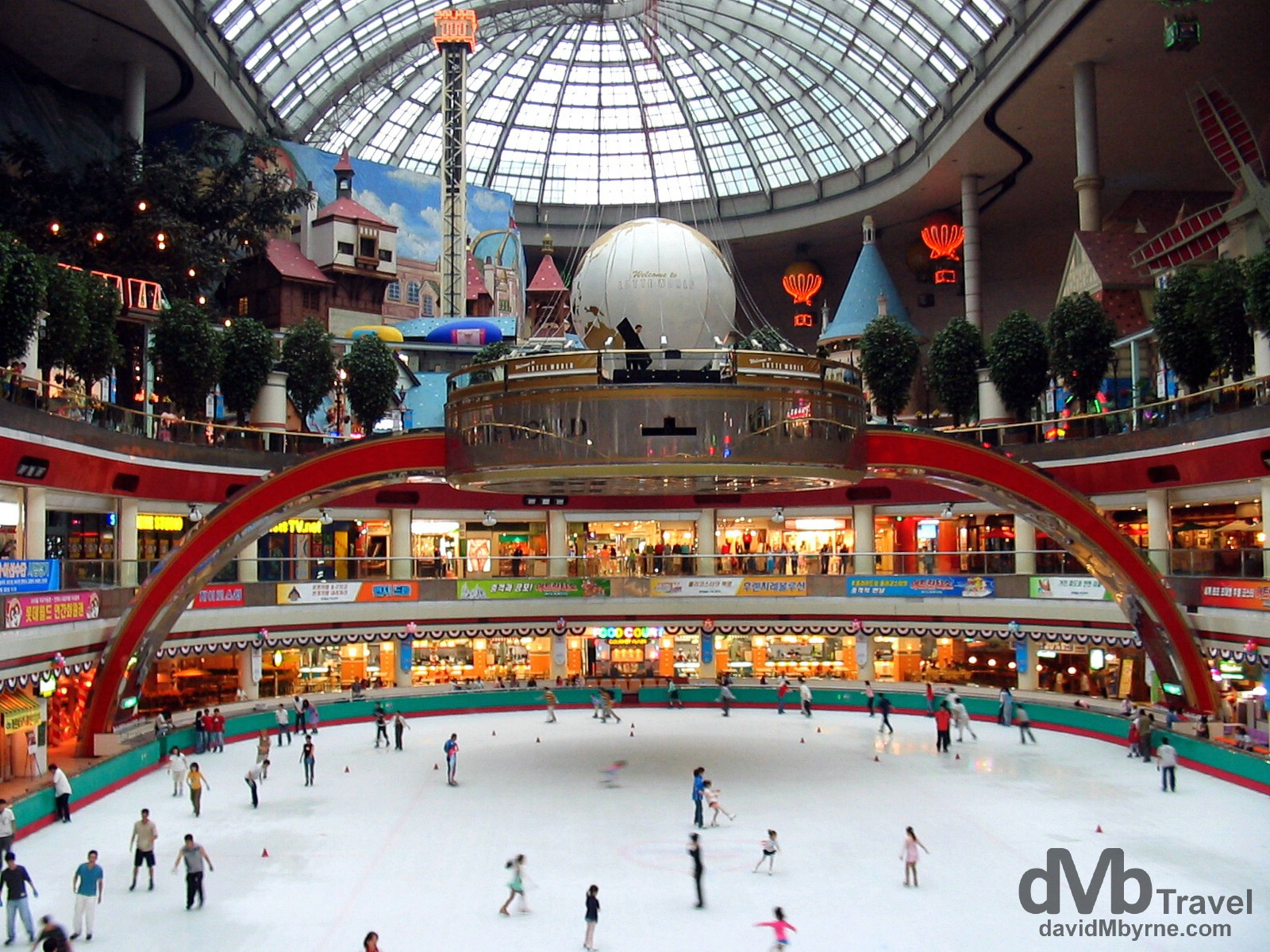 Incessant rain meant a day of indoor sightseeing was called for on this day, with Lotte World being top of the indoor sightseeing list. Opened in 1989, it’s a huge recreation complex, consisting of a large indoor theme park (the largest of its kind in the world), shopping malls, a hotel, a Korean Folk Museum, sports facilities (including this ice rink) and movie theatres. Lotte World, Seoul, South Korea. July 15, 2004. 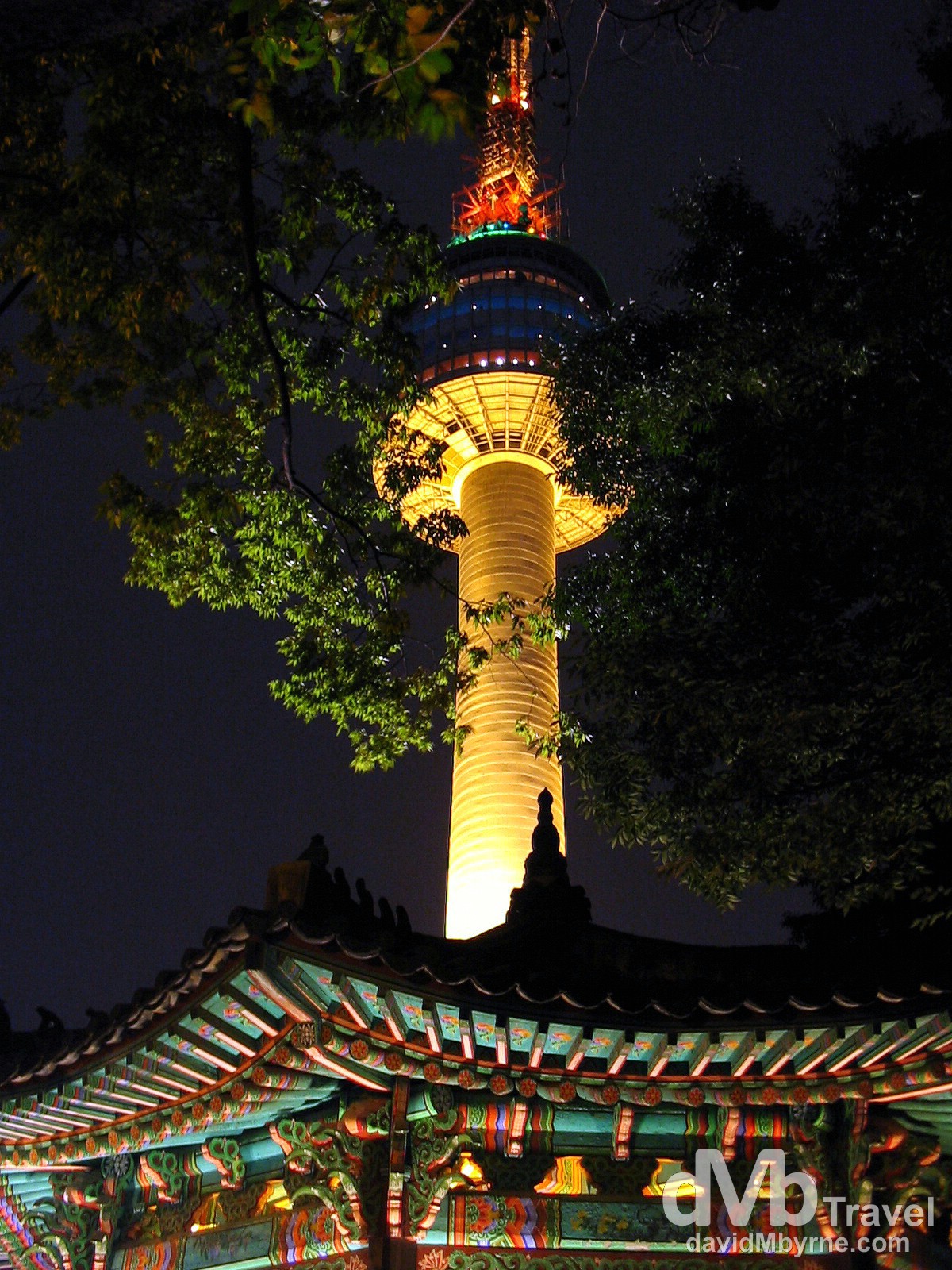 Seoul Tower from Namsan Park on Mount Namsan. The tower is, at 236.7 metres high and 479.7 metres above sea level, the highest point in Seoul. It was built in 1969 but wasn’t opened to the public until 1980. It has the usual tower features, namely 4 observation decks (one of which rotates), 2 non-rotating restaurant and tourist-trap gift shops. At the base of the tower one will find a Teddy Bear Museum & an expansive woodland park, Namsan Park, a popular gathering spot for Seoulites, especially young couples who attach inscribed padlocks on the the park fencing as a sign of their love for each other and the city of Seoul. Seoul, South Korea. August 14, 2004. 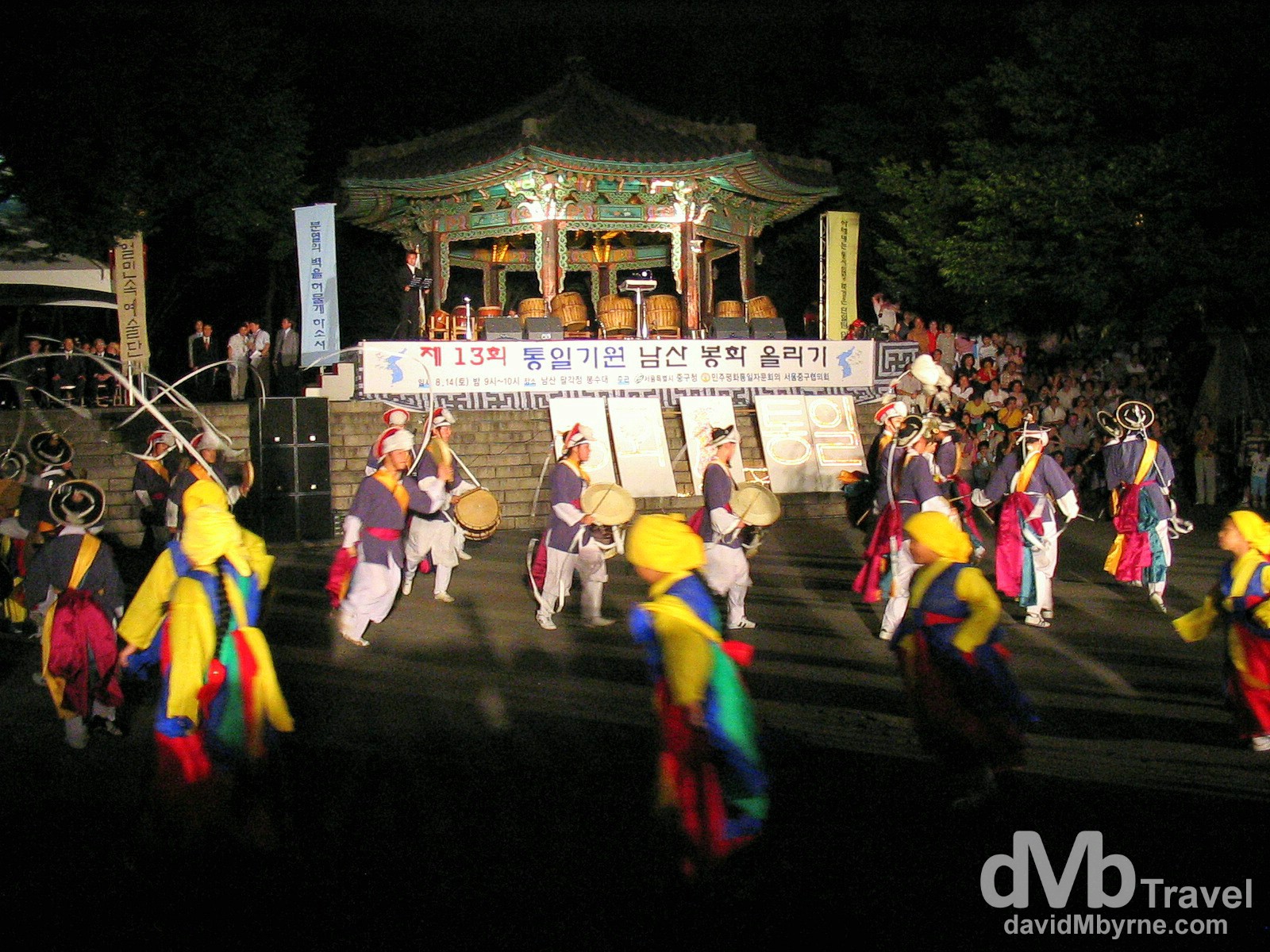 A traditional Farmers Dance, performed to give thanks for a good crop, in the grounds of Namsan Park. This particular weekend was a good weekend to be in Seoul as the city was in the midst of Korean Independence Day (August 15th) celebrations – Korea achieved their liberation from Japanese imperial rule on that date in 1945. Namsan Park, Seoul, South Korea. August 14, 2004. 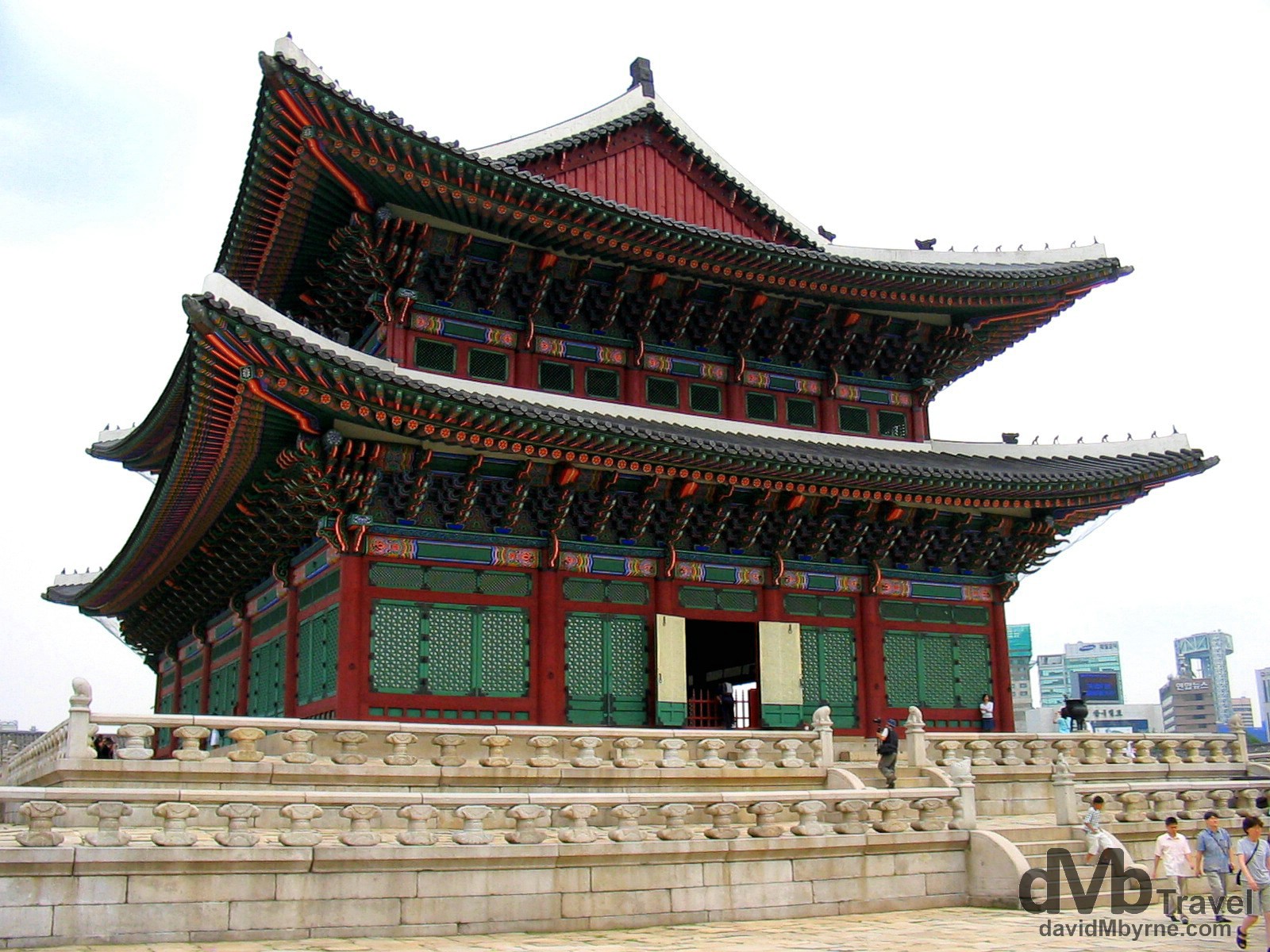 Geunjeongjeon (Throne Hall) in the grounds of Gyeongbokgung, the Grand Palace. This is probably Seoul’s premier tourist attraction and rightly so. I was here during my first visit to Korea 8 months ago but then I was limited to just a quick walk around. I had more time at my disposal on this visit. The palace was originally constructed in 1394 and it was the largest and most important of the Five Grand Palaces of the Korean Joseon Dynasty (1392-1910). Home to the Korean royal family, it also served as a symbol of majesty for the Korean people. But, & like most historic Korean structures, it has had a difficult, storied history – it was burnt down during the 1592-1598 Japanese invasions before being reconstructed during the 1860s as a massive 330-building complex, all but 10 of which were demolished in 1911 by the then ruling Japanese government. There are no known photos of the site before the demolitions took place. Today the grounds of the palace offer many a good photo opportunity, just like this one, and also house the National Folk Museum of Korea, which does a great job at keeping old Korean traditions alive. And as you can probably imagine today, Korean Independence Day, it was a little busier than usual. Gyeongbokgung (Grand Palace), Seoul, South Korea. August 15, 2004. 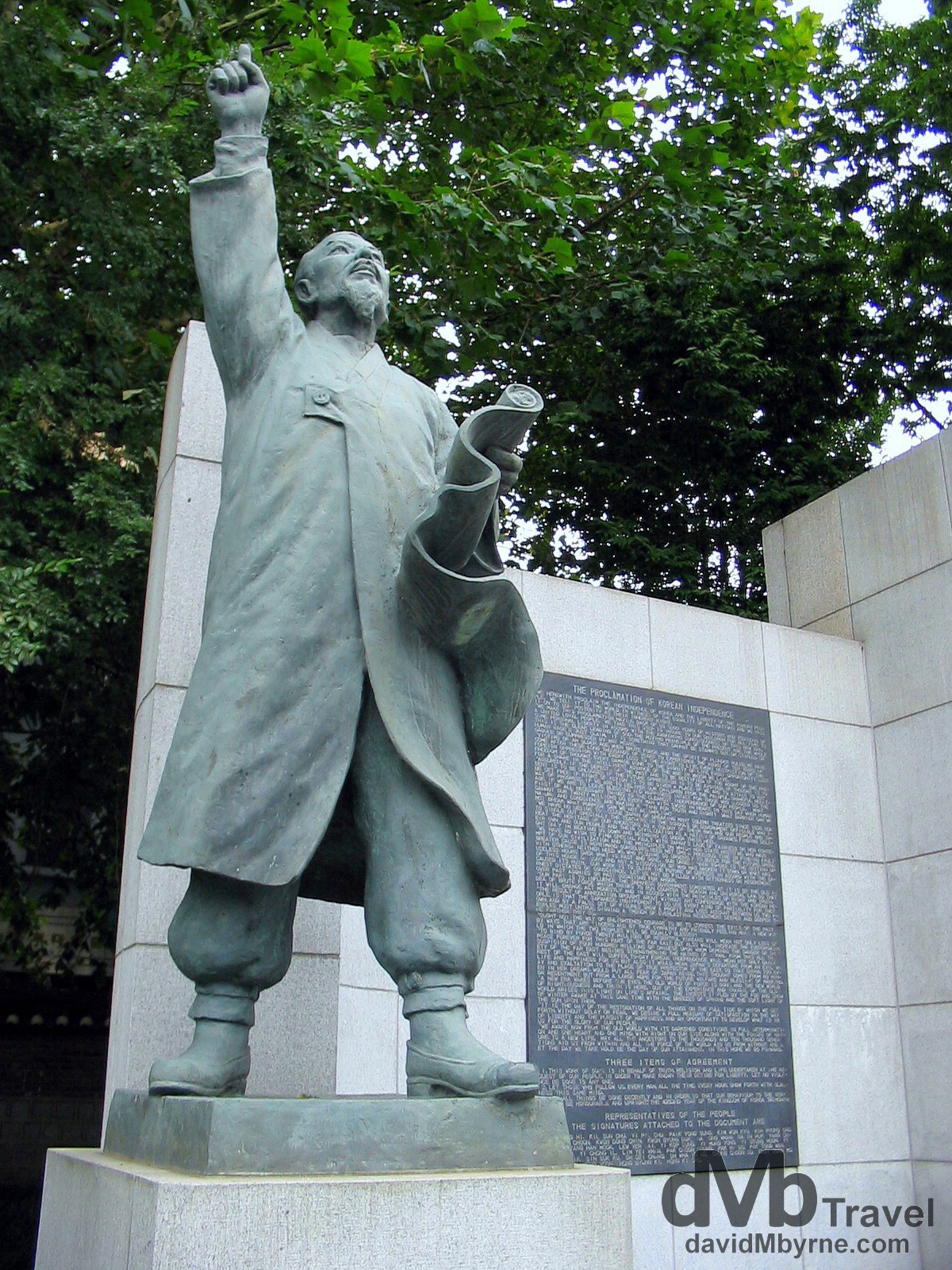 Tapgol Park in central Seoul takes its name from the Wongaksa Pagoda (tap meaning pagoda), a 10-tier pagoda found in the centre of the park and designated as National Treasure No.2 (behind the Namdaemun Gate). The park is historically important in Korea as the site of the origin of the March 1st 1919 Independence Movement and as the first location for the reading of the Declaration of Independence, a copy of which is seen here on display at the monument of the Declaration of Independence. Tapgol Park, Seoul, South Korea. August 15, 2004. 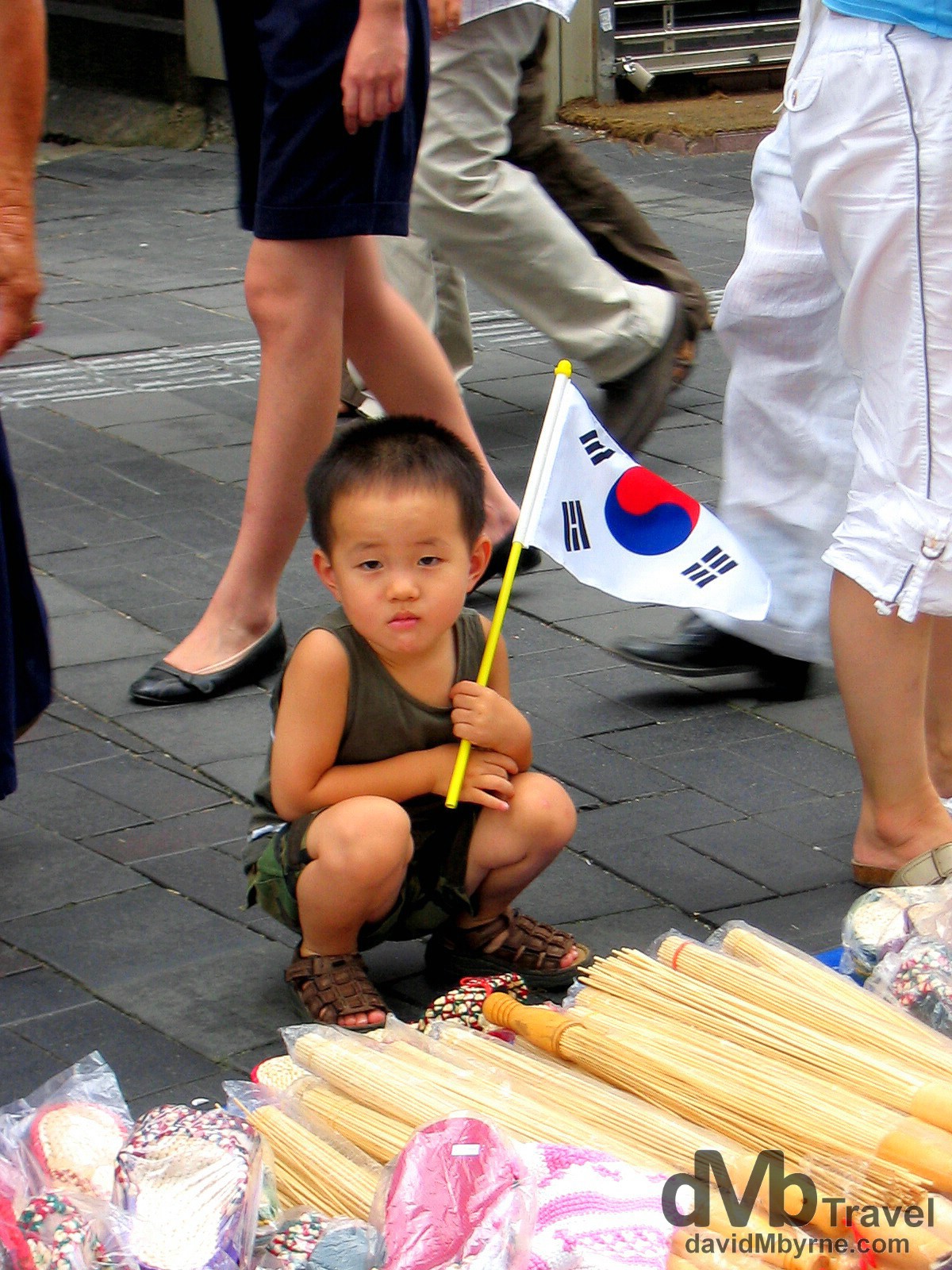 A young flag-bearer in Insadong-gil (street), a fitting shot for Korean Independence Day. Insadong has been at the heart of Seoul for over 600 years and is the centre of the city’s art community. Featuring numerous alleys that branch out from the main street, the area is a favourite shopping spot among foreigners. Over forty percent of the nation’s antique stores are to be found here, with other stores selling old books, pictures, calligraphy, pottery and jewellery. Insadong, Seoul, South Korea. August 15, 2004.

Lots more from Seoul over the years!