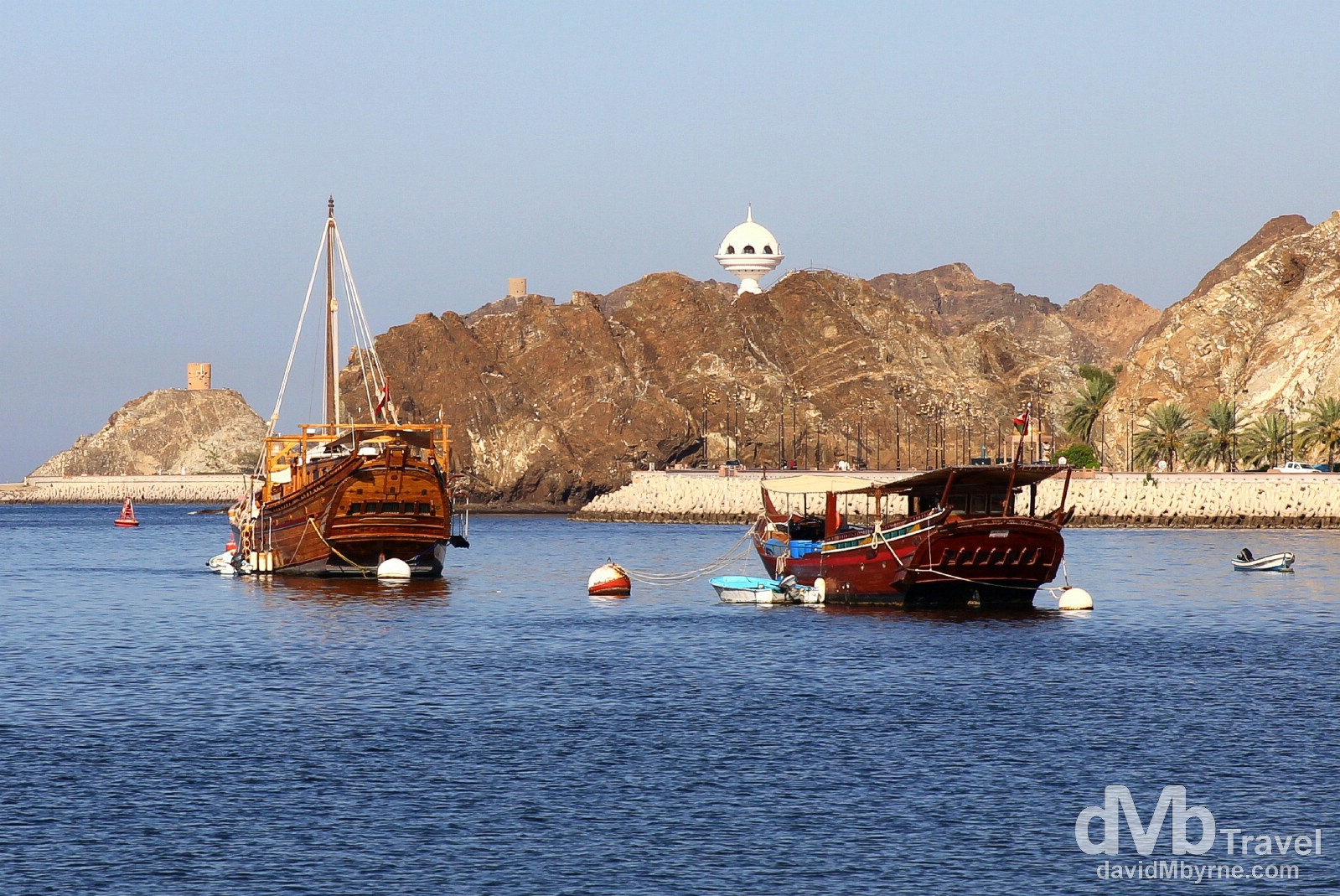 The last time I was in Muscat, the largest & capital city of the Persian Gulf oil rich country of Oman (officially called the Sultanate of Oman), I left earlier than planned even though there was no plan. I will be leaving early this time too. I’ve spent the last 2 days & nights here, with tonight being my third night, having a much more thorough look around the city than I did 6 years ago. I now know there’s way more to Muscat than just its picturesque, tourist-centered Corniche (waterfront). A lot more.

Muscat sits on the coast of the Gulf of Oman surrounded by the Western Al Hajar mountains. It has played an important role in history as a seaport for vessels sailing through the Straits of Hormuz but today the oft-sleepy city has an economy centred on trade, petrol &, more recently, tourism. This picture shows a traditional wooden dhow in Mutrah Port, Muscat’s main port area, as seen from the attractive waterfront Corniche. The white Watchtower in the distance was built to celebrate Oman’s 20th National Day. It is shaped like an incense burner because the country of Oman is a well-known producer of high quality frankincense & other locally made incense. Muscat (

The people are also as welcoming & warm as the ambient daytime temperatures, again just as I remember them being: the receptionist in my hotel told me to pay ‘whenever’; the hotel Chef insisted on cooking me a hikers breakfast, at 1:30pm (it was a slow start to that particular day); & the first taxi driver I interacted with didn’t initially want payment for taking me to the waterfront Corniche only to eventually, & very reluctantly I might add, take payment from me when I shoved it into his hand. That said, the locals doing their thing in the daily Fish Market don’t seem overly fond of tourists poking around and sticking their cameras here & there (understandable I guess). 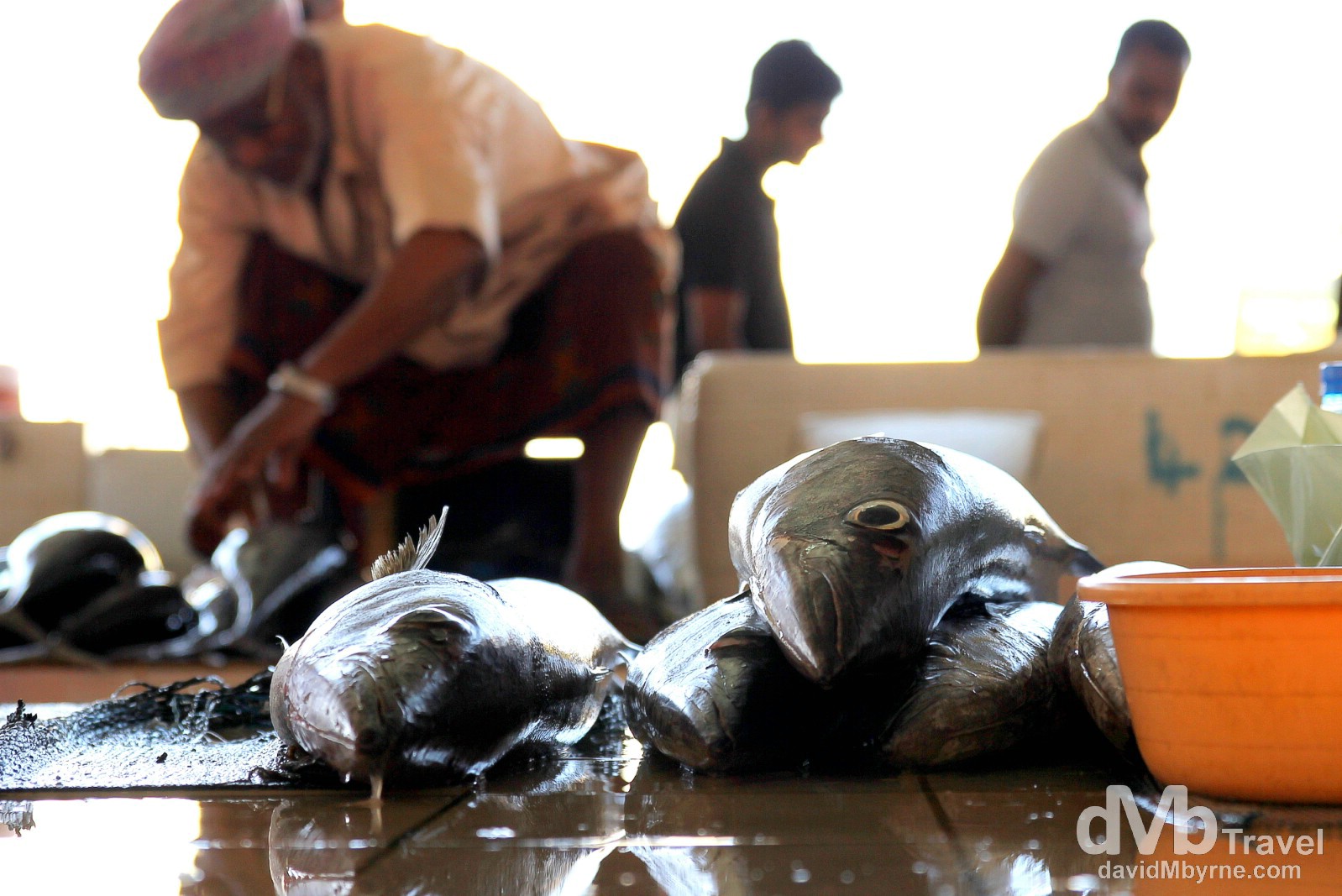 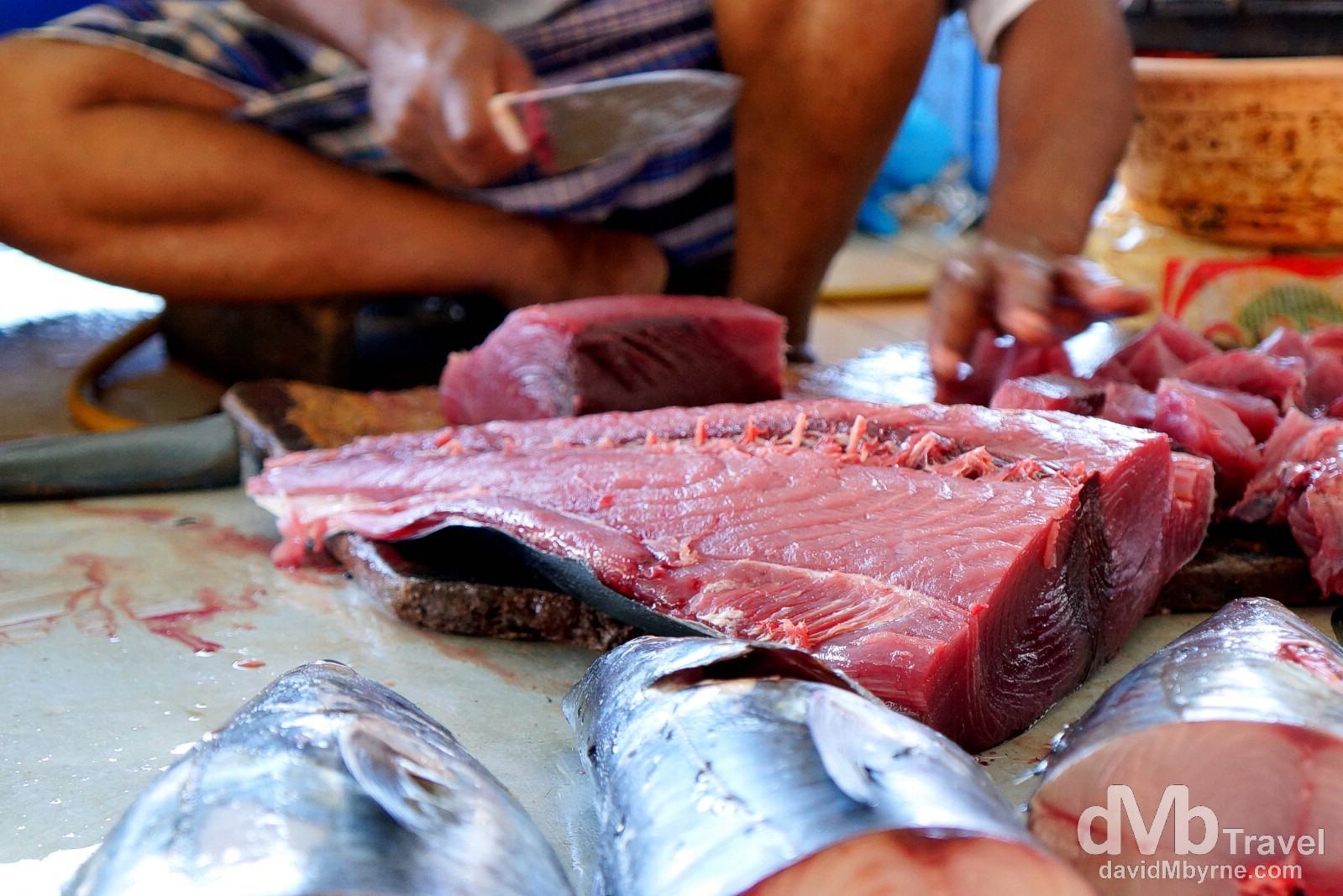 City Bound
There are also many more fellow tourists here than I remember seeing back in 2008, because back then I remember not seeing any – the place was a veritable ghost town, void of locals & tourists alike & its coma-like state was the main reason why I cut that 2008 visit short. As quiet as it may be/is, I actually like the Omani capital but not enough to make the effort to revisit the country just to get reacquainted with its capital – on this visit I was hoping to get out into the Omani countryside/desert to see a wadi (a gully or stream bed that remains dry except during rainy season) or two & experience some Omani culture. That proved harder to organise then it should be for a country looking to increase its exposure as a growing tourist destination, not to mention its slice of the region’s tourism pie. So once again I’m leaving Oman earlier than planned, but not before taking a good look around Muscat, something I didn’t do the last time I was here. 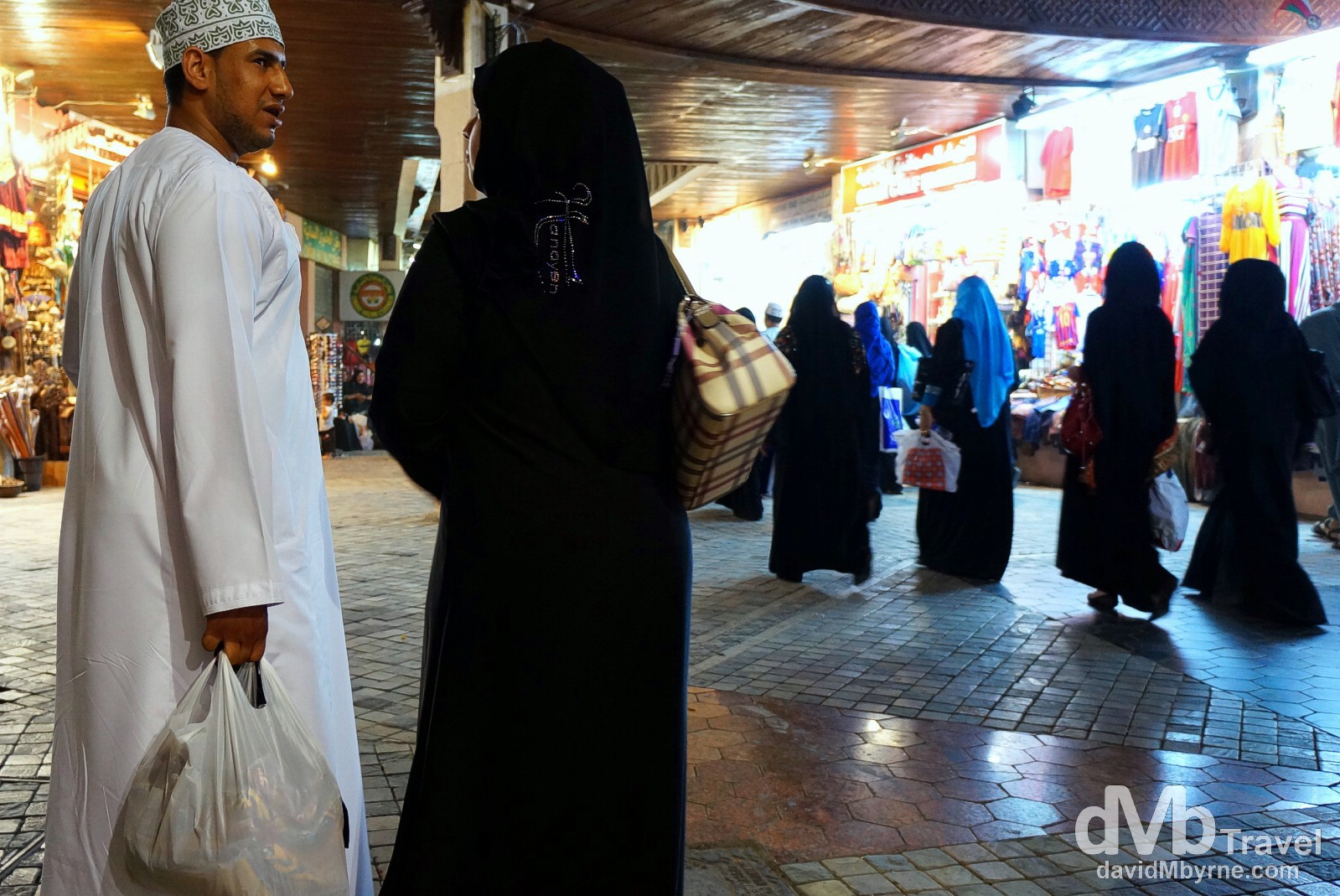 The maze-like Mutrah Souq (marketplace) is also known as Al Dhalem, meaning darkness in Arabic due to the lack of natural light in the narrow souq lanes. The ancient souq, described as one of the best markets in the Gulf region, is one of the oldest in the world reflecting Muscat’s historical importance as a trading port. It retains the chaotic interest of a traditional market despite being housed under modern timber roofing. Almost deserted when I visited in 2008, this time it was a hive of activity, even on a Friday afternoon, the Muslim holy day. The souq, a photogenic but exhaustive place to bring a camera, has several shops for jewelry, traditional Omani handicrafts and Omani food at reasonable prices. Muscat, Oman. April 25th, 2014 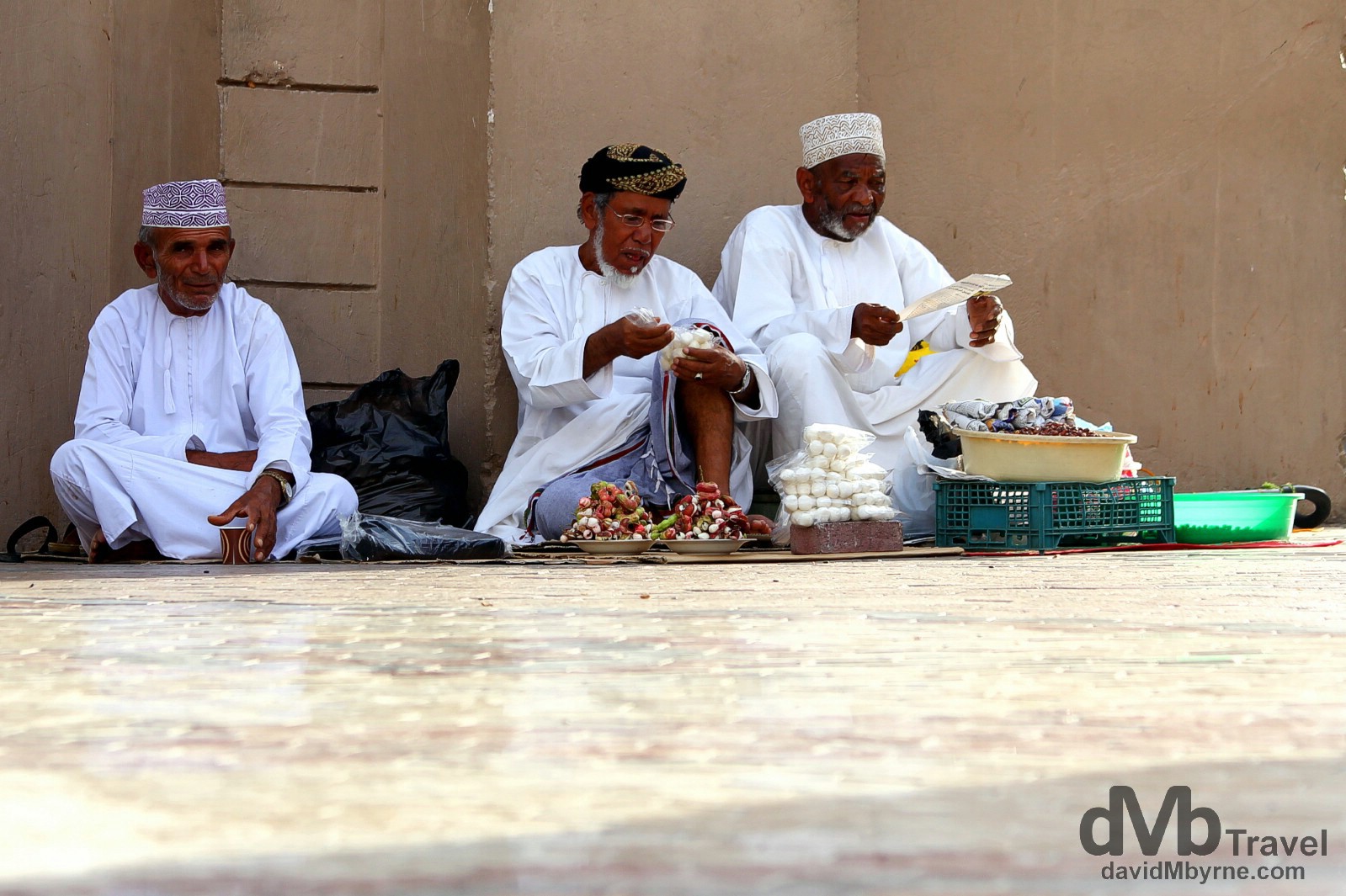 Setting up to begin selling outside the Mutrah Souq (marketplace) in Muscat, Oman. April 25th, 2014. 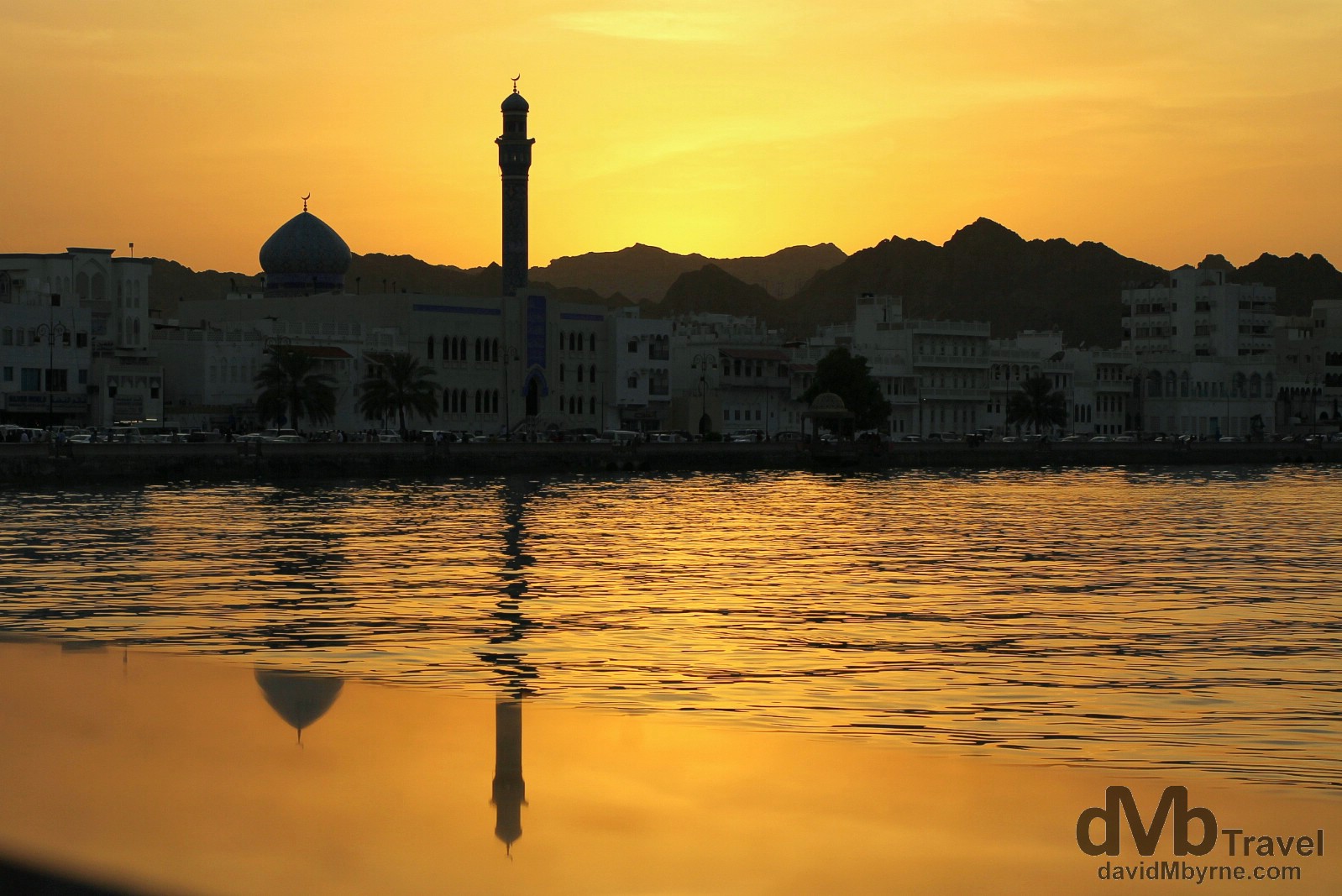 Sunset on Mutrah Corniche. The attractive Corniche, the polished walls of which make for great reflections, has been renovated in recent years and is a very popular area for waterfront walks, especially on evenings with the sun setting behind the latticed buildings & mosques fronting the Corniche. Mutrah, Muscat, Oman. April 25th, 2014

Having been a guest of Big Bus Tours in Dubai & Abu Dubai before it, I got to complete the trilogy of tours in Muscat, easily the most relaxed of the three – Muscat is more compact so distances between attractions are not as great. It makes for an enjoyable tour.

Time to take a look around #Muscat with @BigBusToursME on possibly my last day in the region. #travel #tour #dMbTravel #oman #muscat #ttot 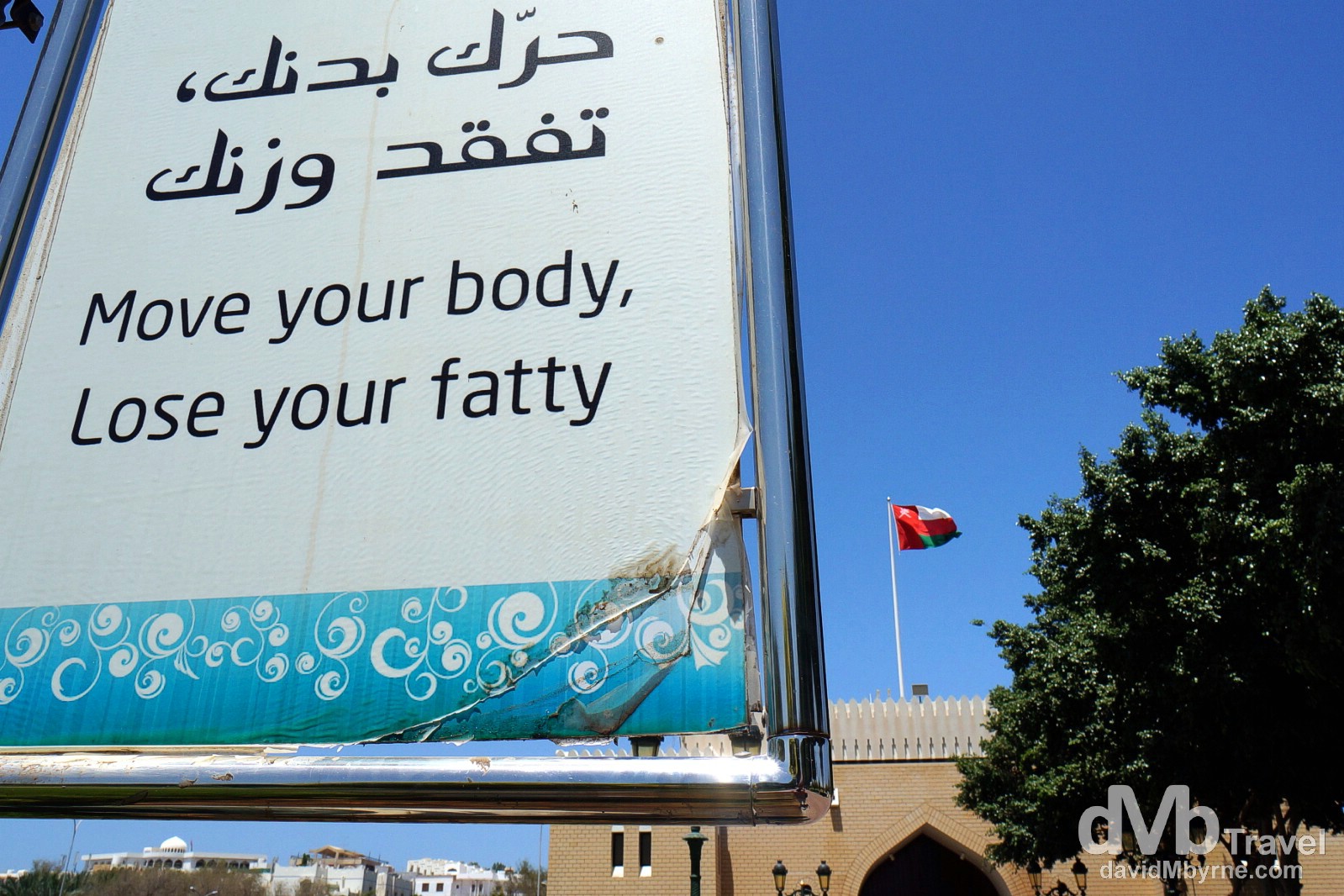 I like this. Some good advice from Muscat Municipality in Al Qurm National Park during a stop on the Big Bus Muscat Tour. Al Qurm, Muscat, Oman. April 26th, 2014 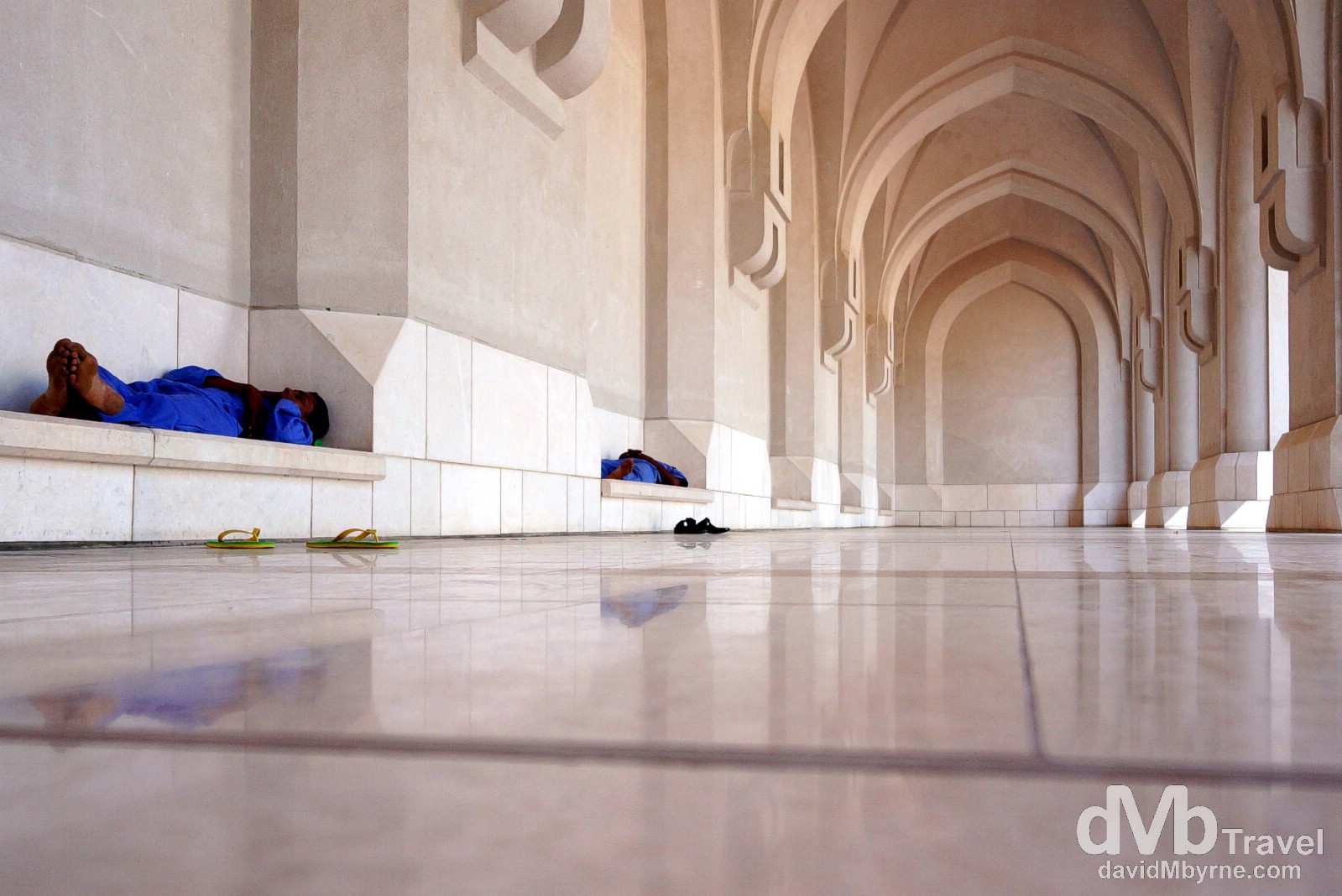 These guys had the right idea. Taking a mid-afternoon nap in the grounds of Al Alam/Sultan’s Palace, the ceremonial meet & greet palace of His Majesty Sultan Qaboos of Oman. Captured during a stop on the Big Bus Muscat Tour. Muscat, Oman. April 26th, 2014

I’ve just booked a flight from Muscat to Casablanca, Morocco. It leaves in the morning. Just like that. I remember the days when I’d meticulously plan every aspect of a trip – how to get there, how long to stay, what to see & do when there, where to stay, where to eat etc. Not anymore. I knew I’d be going to Morocco at some stage. I just didn’t think when I woke up this morning that ‘some stage’ would be tomorrow. I don’t know much about Morocco other than the fact that it has been on my radar for a while (where isn’t?) & that it’s on the Atlantic coast of northern Africa, which is a lot closer to home than Muscat is. So, a travel day tomorrow I guess. Good. That’ll give me time to read up on Morocco.