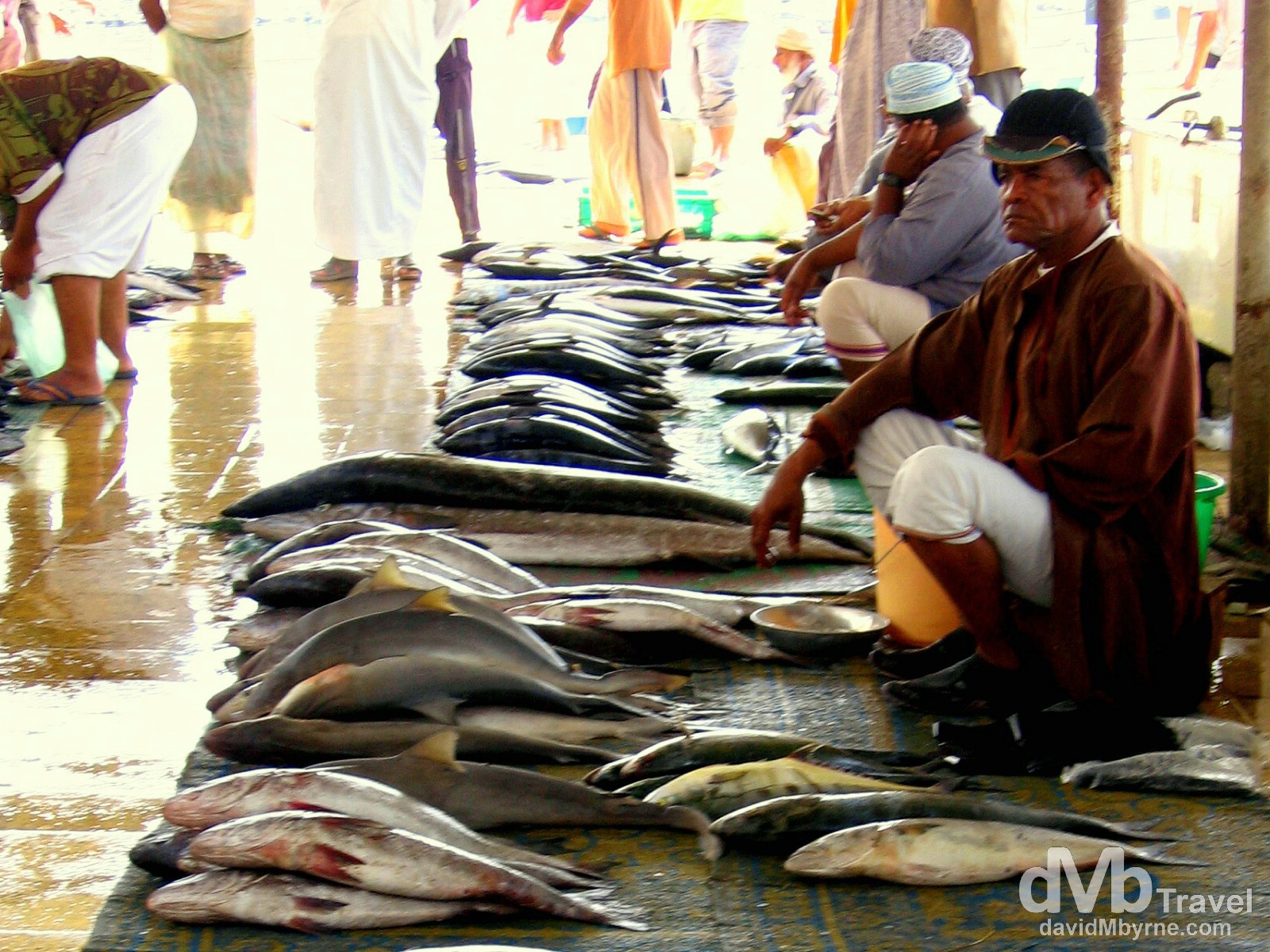 I won’t say too much about our flight(s) from Mumbai to Muscat apart from the fact that they required us to get out of bed at 4:00 a.m. yesterday morning, the earliest we’ve dragged ourselves out of any bed thus far. Although the flights themselves were relatively short, and the connection in Bahrain even shorter, we’ll remember the 5-and-a-half hour trip as one of queues and countless security, passport & boarding card checks in two different airports. Oh, and we’ll also remember the Muscat customs official who diligently rummaged through our bags in search of, well, we assume in search of something we shouldn’t, and didn’t, have in our possession. We’re good boys after all.

“Do you smoke hashish?” Pat was asked by the official as he poked his hand in and out of every part of Pat’s bags, smelling his fingers for suspicious substances as he went. Clean as a whistle. 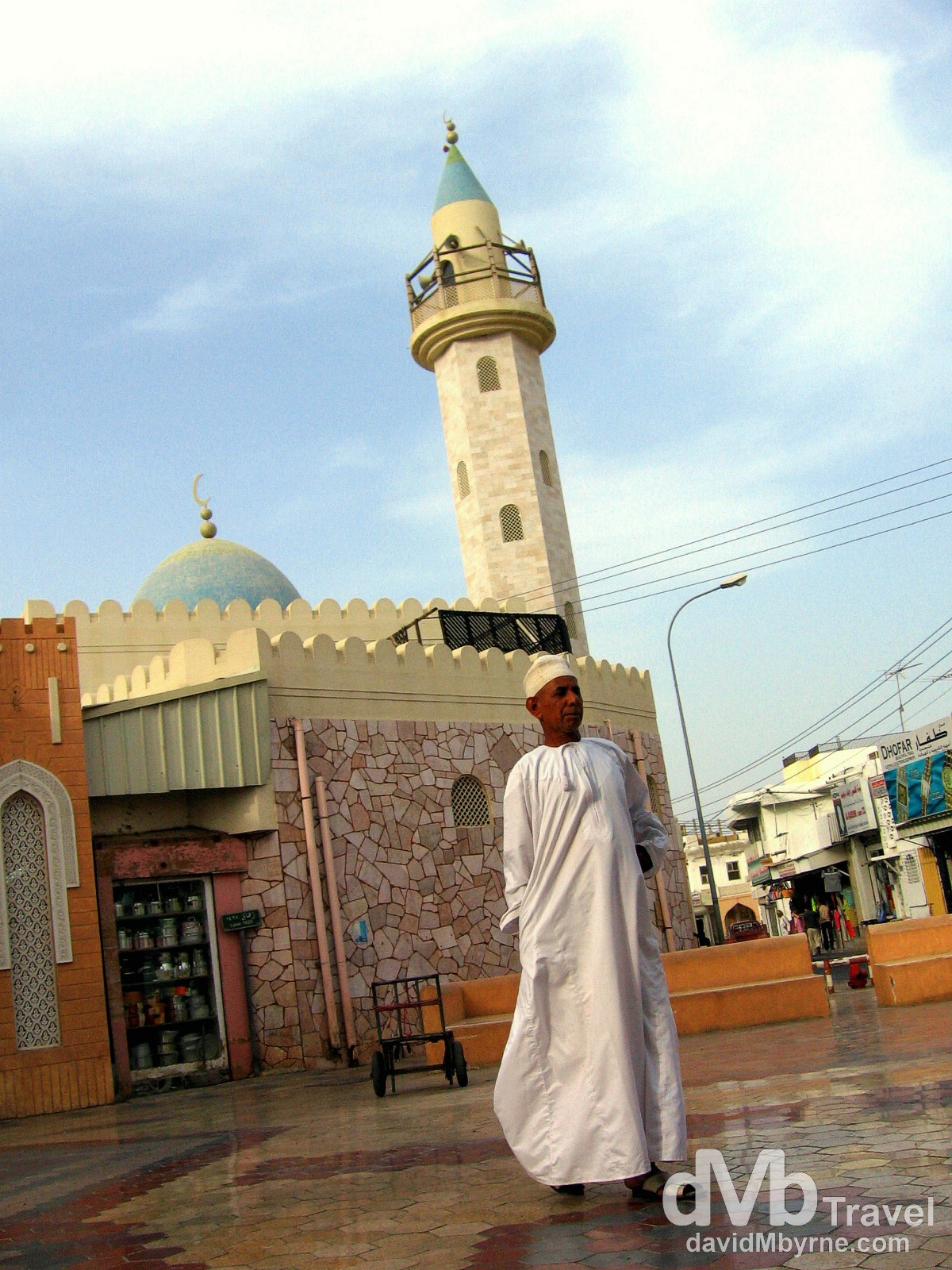 A jalabiyya wearing local outside a mosque at the entrance to Muscat’s Mutrah souq (covered market). Muscat, Oman. April 5, 2008.

Once we got all that out of the way, and had put our bags back together, we soon realised that it’s pretty hot here in Muscat, the capital of the Persian Gulf oil rich country of Oman, officially called the Sultanate of Oman. Pat still doesn’t know why we’re here and now that we’ve spent a whole night here I’ve given up coming up with reasons/justifications for having stopped off on this part of the Arabian peninsula en route to Cairo other than “why not?” It’s a strange sort of place, a hot, quiet city (it is a push calling it such but a city, we’re told, is what it is) a million miles removed from the noise, dirt and general madness of India, still fresh in our memories. We arrived here yesterday afternoon and quickly settled into our Corniche Hotel room overlooking Muscat harbour. We then headed out to have a look around, something that didn’t take long to do and once we had it done we realised we were bored. Since that walk around yesterday afternoon we’ve had trouble coming up with other stuff to do; we’ve walked up and down the waterfront promenade (corniche) a few times wondering as we went where everyone was and trying to figure out exactly how hot it was – the latter became apparent once we reached the digital clock/thermometer outside the city souq (market) where we learnt it was a cool 34 degrees (but we’ve still no idea where everyone was/is). We spent last night on a quest to have a beer (or two), a quest that was to ultimately end in failure but only because we, having Indian prices still fresh in our memories, deemed the €8 asking price for 2 cans of lukewarm beer exorbitant. Then today we paid an early morning visit to the fish market to witness some big game fish in the rather unfortunate position of being gutted. Then a few hours ago, & in a final last-ditch bid to feel like real attraction visiting tourists, we left our hotel room with the intention of visiting one of the two forts overlooking the city, something we soon gave up on once we got a good look at the hills the forts sit upon and the digital thermometer we found yesterday, the one which today was telling us it was a not so cool 36 degrees. It was around this time that we made the assumption that it was this heat that was keeping all the Arabs indoors; if we had seen one out and about we might have asked him/her if this was the case. But we didn’t, and nor did we did see a few fellow westerners on the streets. Pat was looking for someone, anyone, to ask them why they were here, possibly in an attempt to discover why we were here also. He still wants to know.

So with all said and very little done we decided this afternoon to check out of our hotel a day earlier than planned and make for Dubai in the United Arab Emirates, a 6 hour bus journey away. We had to reassure the hotel clerk that we were not checking out early because of a problem with the hotel (but we stopped short of telling him that the reason we were checking out a day early is because we were bored with his city). We’re on the bus right now and I think Pat is still wondering why we came to Oman at all. And now I am too.

Recent Observation
With India still fresh in our memories it just seems right to attempt to explain what it’s like to visit Muscat by way of comparing it to India. So here goes (and excuse any sweeping generalizations I may make here and the haphazard order in which I present these points).

– The visa process
The Indian visa process required a week of our time in Kathmandu, Nepal and €30 of our money. The Omani visa process involved paying the 6 Omani Rial (€10) fee upon arrival in the airport arrivals hall. Simple.
– People
India is thronged with non-beef eating Hindus wearing Saris (women), pastel coloured trousers & check shirts (men) or almost nothing (religious freaks). Oman is sparsely populated by non-pork eating Muslim Arabs wearing burqa, an outer garment, typically black, worn by women for the purpose of cloaking the entire body, or jalabiyya, a long robe, sometimes hooded, worn by men.
– Buildings
India is full of temples, shacks and buildings that haven’t been tended to in decades and that look like they would crumble at any given moment. Oman is full of mosques and pastel coloured buildings that look like they were painted yesterday.
– Weather
India is hot (low 30’s Celsius). Oman is hotter (mid to high 30’s).
– Getting around
In India they beat-up TATA’s on either side of asphalt-challenged roads blasting their horns as they hurtle along at 30 kilometres per hour. In Oman they drive new cars from all over the world on smooth, pothole free roads following road rules that say they are to drive on the right hand side of the road (we’ve yet to hear a horn being blown).
– Stress factor
India would give an aspirin a headache. Oman would put you to sleep.
– Man’s best friend
India had cows, Oman has camels.
– Accommodation
India has €5 guesthouses with questionable plumbing & electric’s and very questionable cleanliness (and if you’re lucky a little comfort). Oman has €40 hotels with no cockroaches, clean comfortable bedding, air-conditioning, non-hazardous electric’s, clean, tiled bathrooms with plumbing that actually dispenses cold water from the cold water tap and hot water from the hot water tap.
– Food
In India they eat curry and nan bread cook in a tandoor oven. In Oman they eat shwarma (grilled meat – lamb or chicken – sliced from a spit), hummus (thick spread made from mashed chickpeas, tahini, lemon juice and garlic) and falafels (small croquette of mashed chick peas or fava beans seasoned with sesame seeds).
– Drink
In (most of) India beer is widely available. In Oman it isn’t.
– Wealth
India sells rice, textiles, IT and call centres and whatever money the country seems to have benefits only a tiny percentage of the population. Oman sells oil and its people seem to be doing just fine, thank you very much. 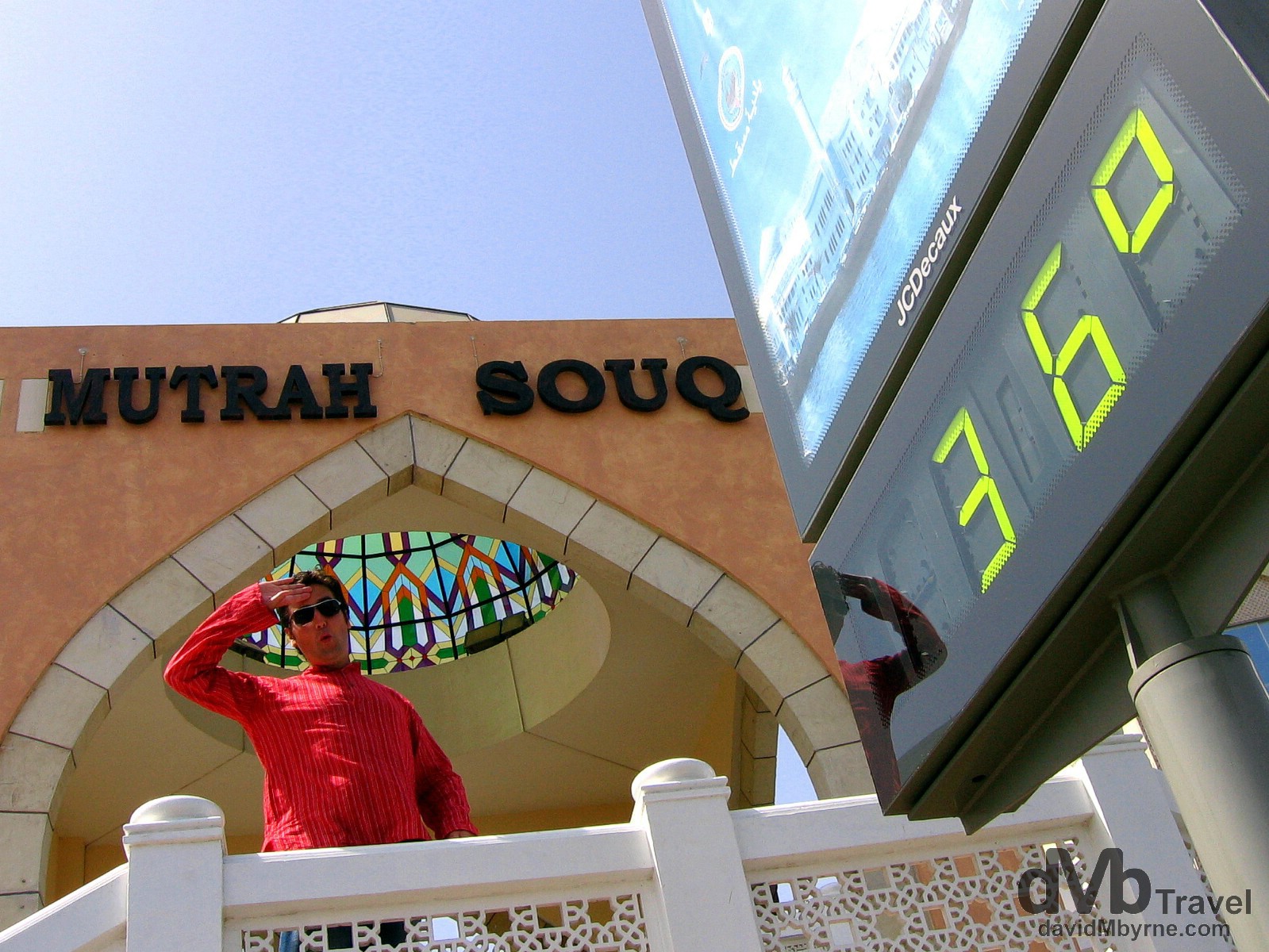 Pat outside the Mutrah souq on Muscat’s corniche. It was about this time that we realised that in the absence of an air-conditioned bar that it was too hot to do much of anything in Muscat except stay indoors or sit on a bus to Dubai. Given the two options, and the lack of an air-conditioned bar, we soon found ourselves heading back to our hotel for an early checkout. Muscat, Oman. April 6, 2008.

· Gulf Air
We flew here with Gulf Air, a nice, no nonsense and good value airline that employs great looking air hostesses. We got our first taste of hummus on-board and it whetted our appetites for what lays ahead. The downside? No beer on board.

· Air Force One?
When we were taxying to the small arrivals terminal of Muscat International Airport yesterday we saw Air Force One parked outside a nearby hanger. We were not sure if it was the one George W himself was using (there is more than one Air Force One after all) but we did learn later on thanks to our satellite TV hotel room (and BBC World) that he was in the area on route to a meeting with Valddy Putin.

· 0.145 Rial
It is 0.145 Omani rials for a litre of petrol over here. That’s about €0.25 cents. That just seems an appropriate, albeit boring, observation considering the part of the world we’re in/passing through at the moment. 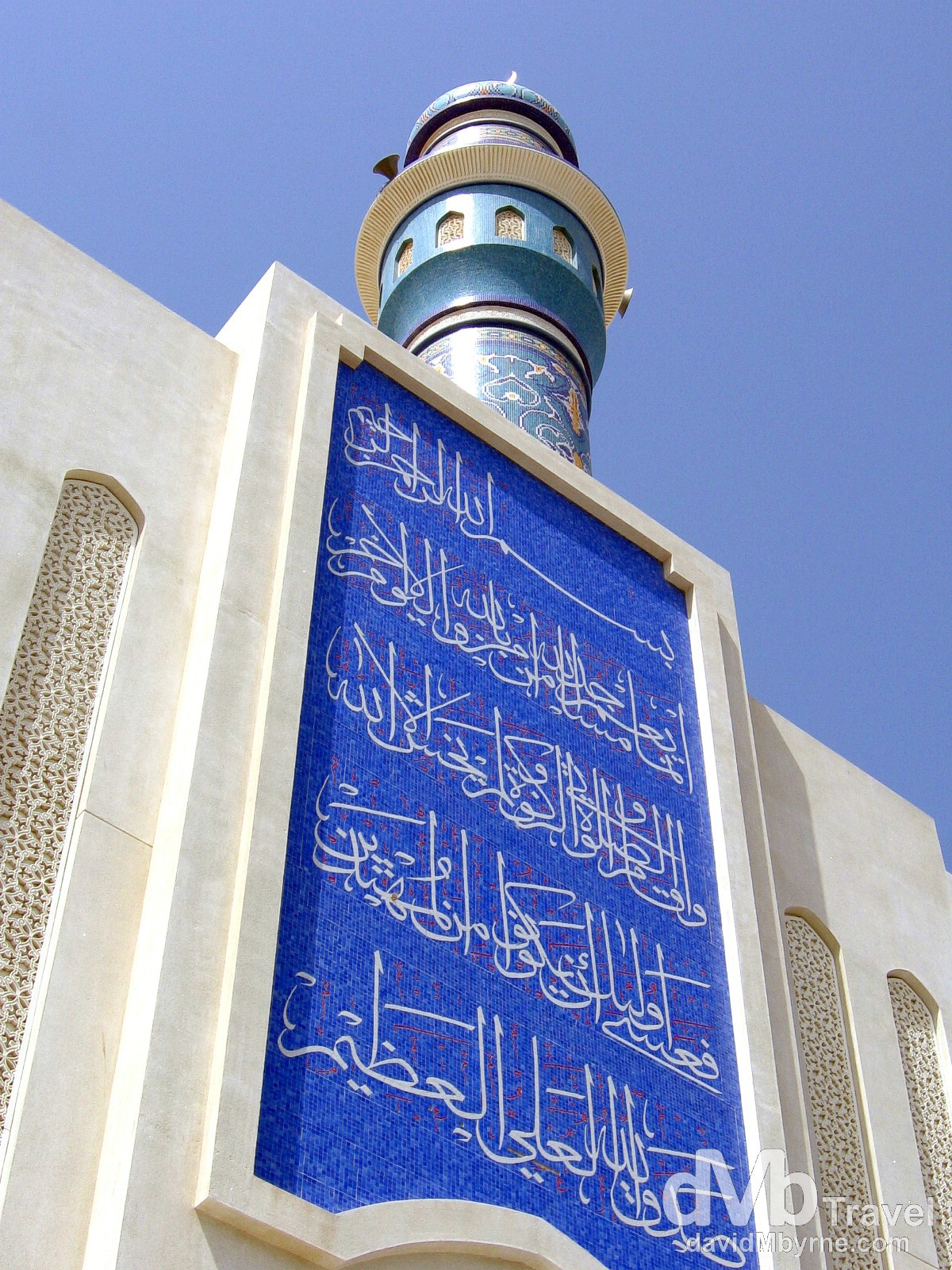 The front of a mosque on Muscat’s corniche. The script seen here is Arabic, the official language of most of the Arabian Peninsula and Middle Eastern countries. It is written from right to left and is seemingly a hard language to learn and one that doesn’t translate easily into English. Thankfully English is widely spoken which means we haven’t had to resort to smile, point and grunt forms of communication. Not yet. Corniche, Muscat, Oman. April 6, 2008.

· Siesta
This place is quiet enough outside of the hours of 1-4 p.m. but it’s almost graveyard quiet during those mid-afternoon hours. Everything closes and everyone, we assume, stays indoors either praying, eating or sleeping.

· Eminem & 50 Cent
But not everyone stays indoors. Yesterday afternoon we got taking to local who was, like us, sheltering from the sun in a bandstand on the Muscat corniche (waterfront). He was eager to converse with us although his English was at best patchy. During our conversation he managed to tell us that there is so much more to Oman than Muscat (maybe he sensed we had nothing to do), that his MP3 player, something he was very proud of, was full of Eminen and 50 Cent and that he was waiting for a nearby internet cafe to open, somewhere he goes on a regular basis to escape his parents. We seemed to find a jalabiyya wearing local who listens to 50 cent and who goes to an Internet cafe to escape his parents funny, certainly funnier than it reads. 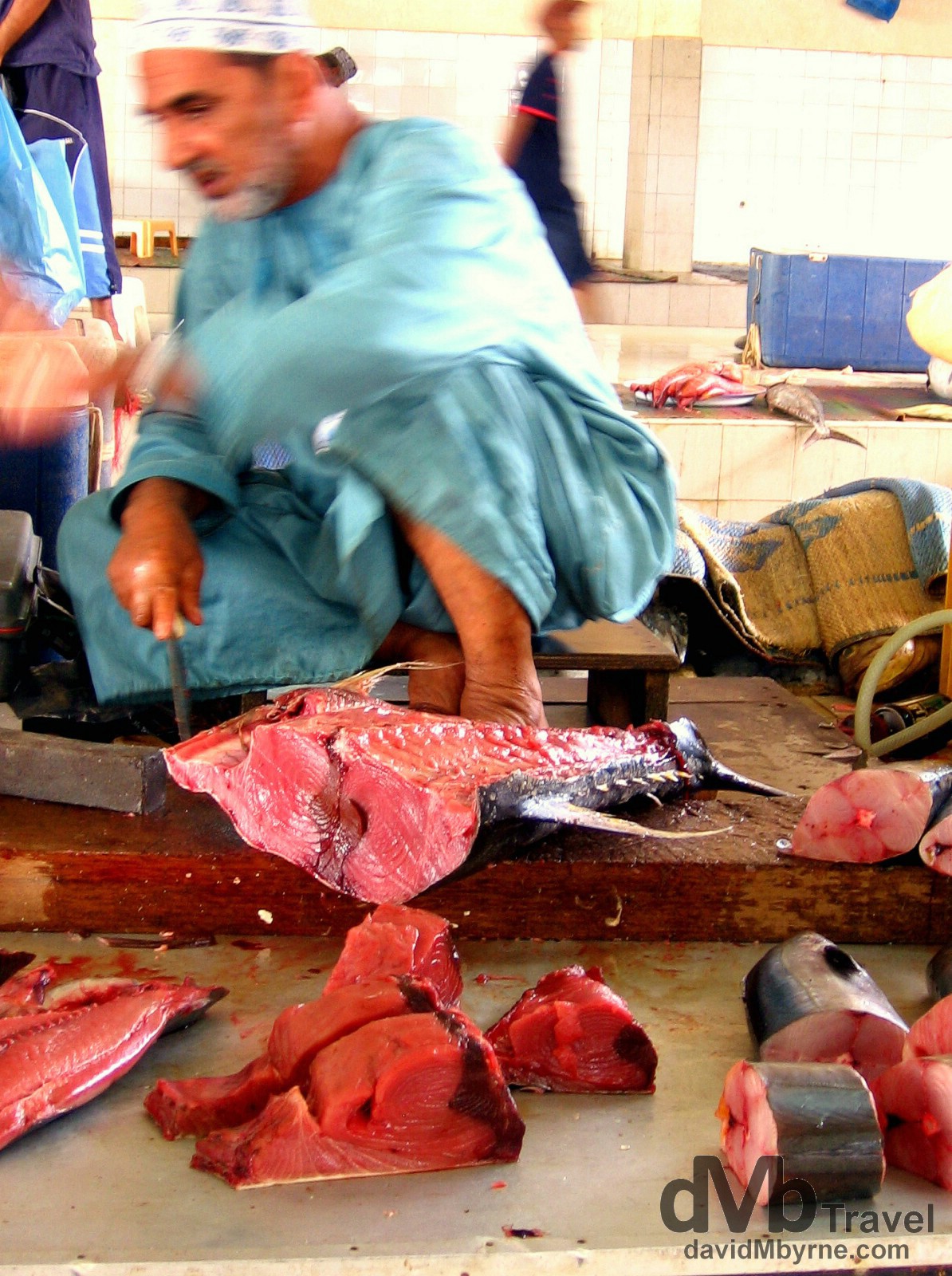 · After Dark
Sitting at a corniche cafe yesterday evening watching the locals come and go (they come out at night) was quite the spectacle. It was the first time we got a look at more than a sprinkling of Muscat locals and the first time we saw on mass the habits and dress sense of a staunchly Muslim country. Men and women never mix, with women in particular, covered head to toe in by their burqa’s and carrying shopping bags, moving in large groups between shops while the men while away the evening socialising in cafes.