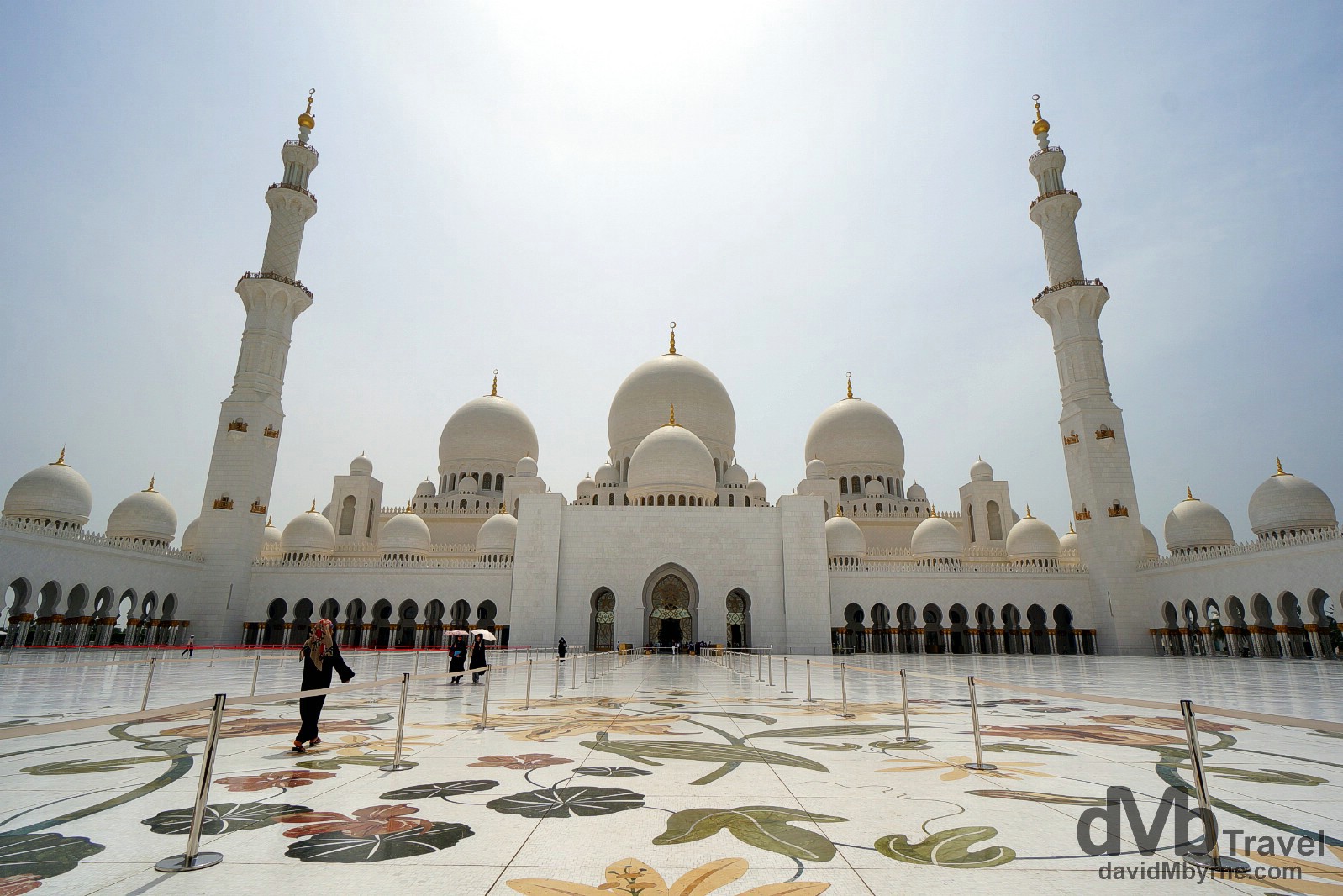 Although it may seem the case, the United Arab Emirates isn’t just a stage for Dubai to strut its increasingly crazy stuff. It has a capital city (no Dubai isn’t it) that offers its own we’re-not-losing-the-run-of-ourselves sights & attractions, although (obviously) not on the same scale as in Dubai. Things are a little different, a tad more laid-back here in Abu Dhabi, the UAE capital, a 2 hour bus ride south from Dubai. Unlike its oil-parched northern neighbour, the Abu Dhabi oil, totalling a whopping 9% of the world’s total oil reserves, isn’t due to run dry for another 100 years or so, give or take. So there’s no rush to reinvent here, not yet anyway. And there’s no shortage of money either. Frenzied construction is everywhere – you can’t look this way or that without seeing a sea of cranes building the latest tower block or an armada of ugly oceangoing vessels dredging the shoreline & reclaiming even more land. But it all seems more controlled here, more deliberate. Abu Dhabi seems intent on improving, not just attracting, & it doesn’t seem too bothered whether or not the hordes will come as a result of all this building. But they are definitely getting ready to welcome them Arab style should they, like me, they decide to pay a visit. 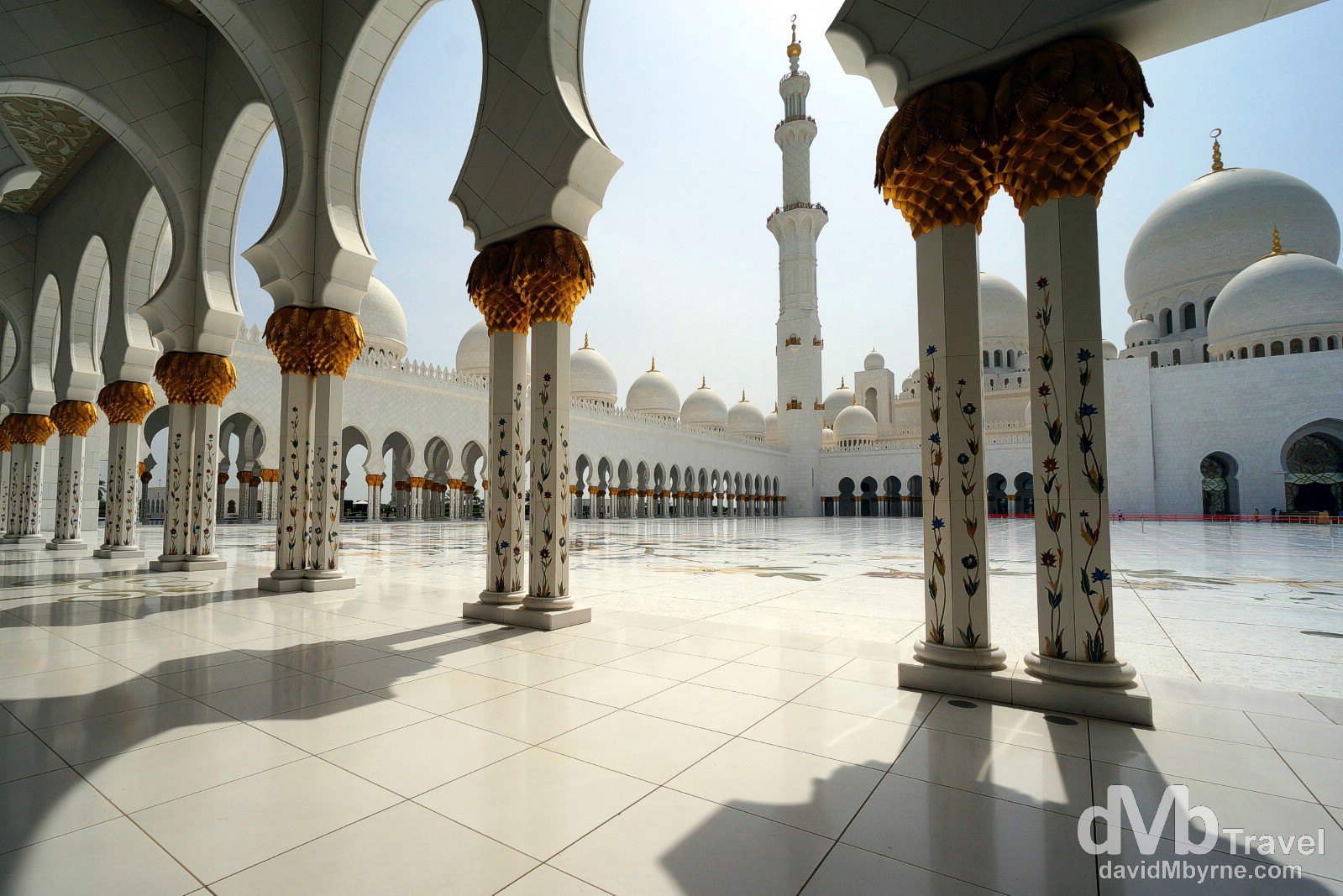 Shadows at the Sheikh Zayed Grand Mosque in Abu Dhabi (

By the time I leave here in the morning I’ll have spent two nights in Abu Dhabi. I’ll be honest and say I really only came here for one reason – to see the city’s stunning Sheikh Zayed Grand Mosque. And see it I did. Of the 10 pictures I present here from my time in the city, 7 of them are from the mosque. I visited it twice – last night shortly after arriving in the city from Dubai and again today – and if I were here tomorrow (I won’t be) I’d probably visit again. 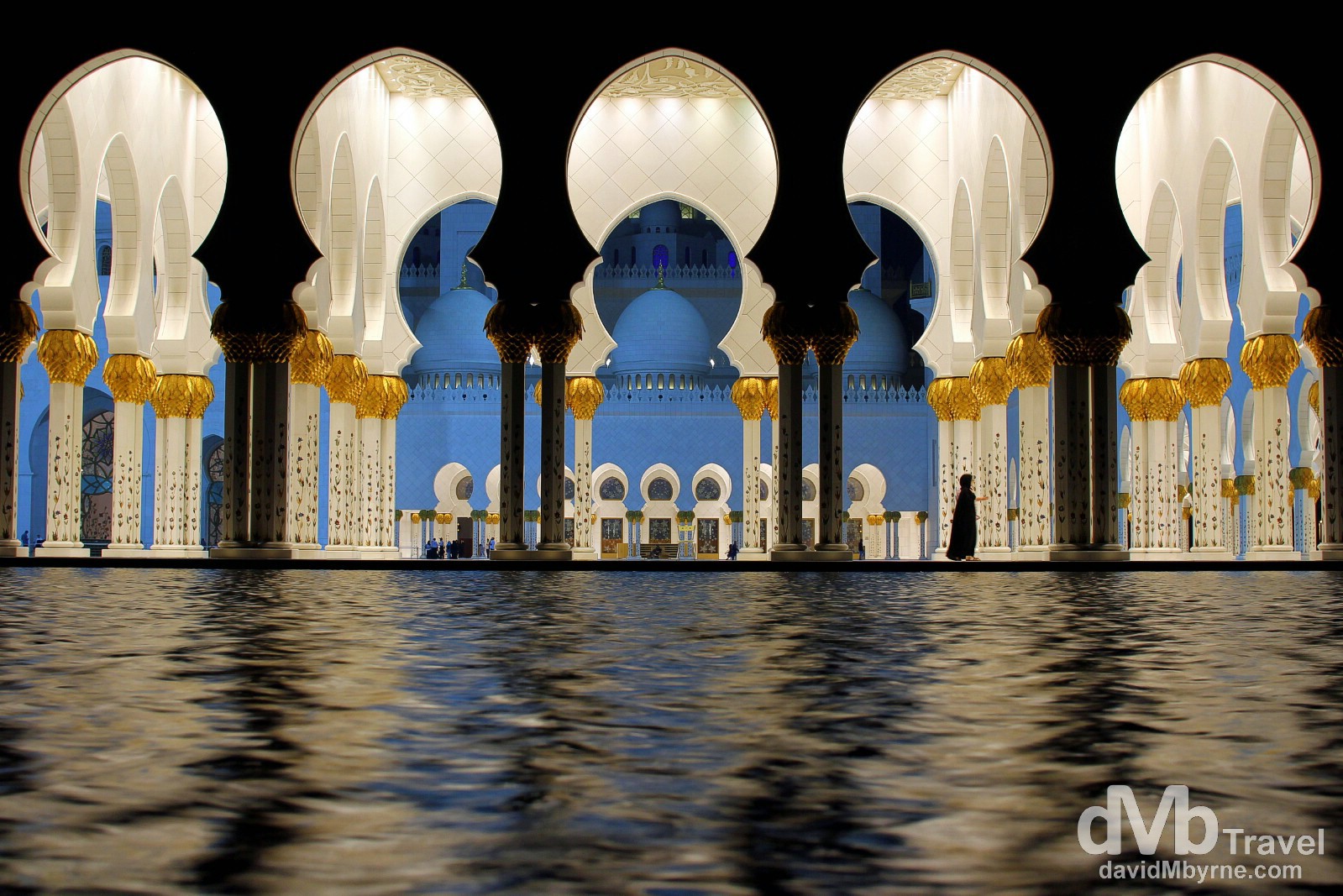 The Sheikh Zayed Grand Mosque
The Sheikh Zayed Grand Mosque is named after the first president of the UAE who is buried here. Abu Dhabi’s most important landmark, it was built mostly of cornea-melting white Italian marble over an eleven year period between 1996 and 2007. It’s the largest mosque in the UAE & while it’s only only the 8th largest in the world, it’s easily the world’s most lavish Muslim place of worship, its dazzling opulence reflecting both the wealth of the UAE & the mosque’s importance to the country. 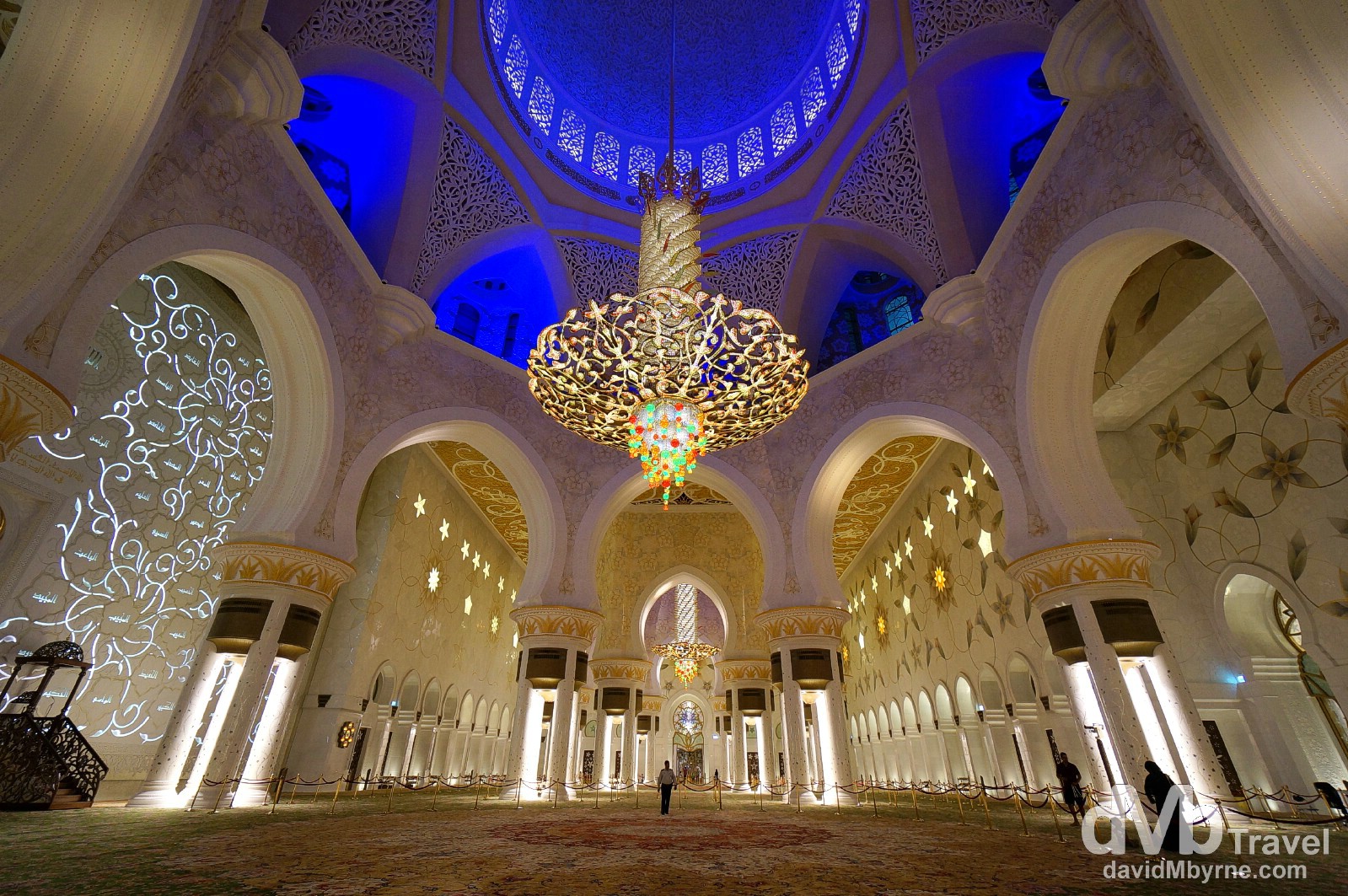 While the exterior of the Sheikh Zayed Grand Mosque will doubtless amaze, it is the Main Prayer Hall of the mosque’s interior that steals the show. It really is quite the sight and it’s a wonder they let anyone, let alone a sweaty non-Muslim Irish backpacker like me, in here to sully the place. But they do – the mosque is open to those of all religious creeds, a trait unique among UAE mosques. The Main Prayer Hall, Sheikh Zayed Grand Mosque, Abu Dhabi, UAE. April 22nd, 2014

A few titbits about the mosque’s interior, just for just.

• At a push it can accommodate 7000 prostrating worshipers.
• It’s topped by a gloriously illuminated central dome that is 87 metres high and 33 metres in diameter.
• From the centre of the dome hangs a 15 metre high, 10 metre diameter chandelier, the largest of the mosques 7 chandeliers, all custom made & imported from Germany and all infused with millions of Swarovski crystals. Sure why not?
• Below your feet you’ll find a 35-ton, New Zealand wool carpet, the largest, most expensive hand-woven carpet in the world. It was made over a two year period in Iran by upwards of 1200 carpet knotters.
• Encapsulating all of this grandeur are white marble walls inlaid with floral designs and decorative gold-glass mosaics, not to mention pillars inlaid with semi-precious stones & crystals, just like as found at the Taj Mahal in Agra, India. 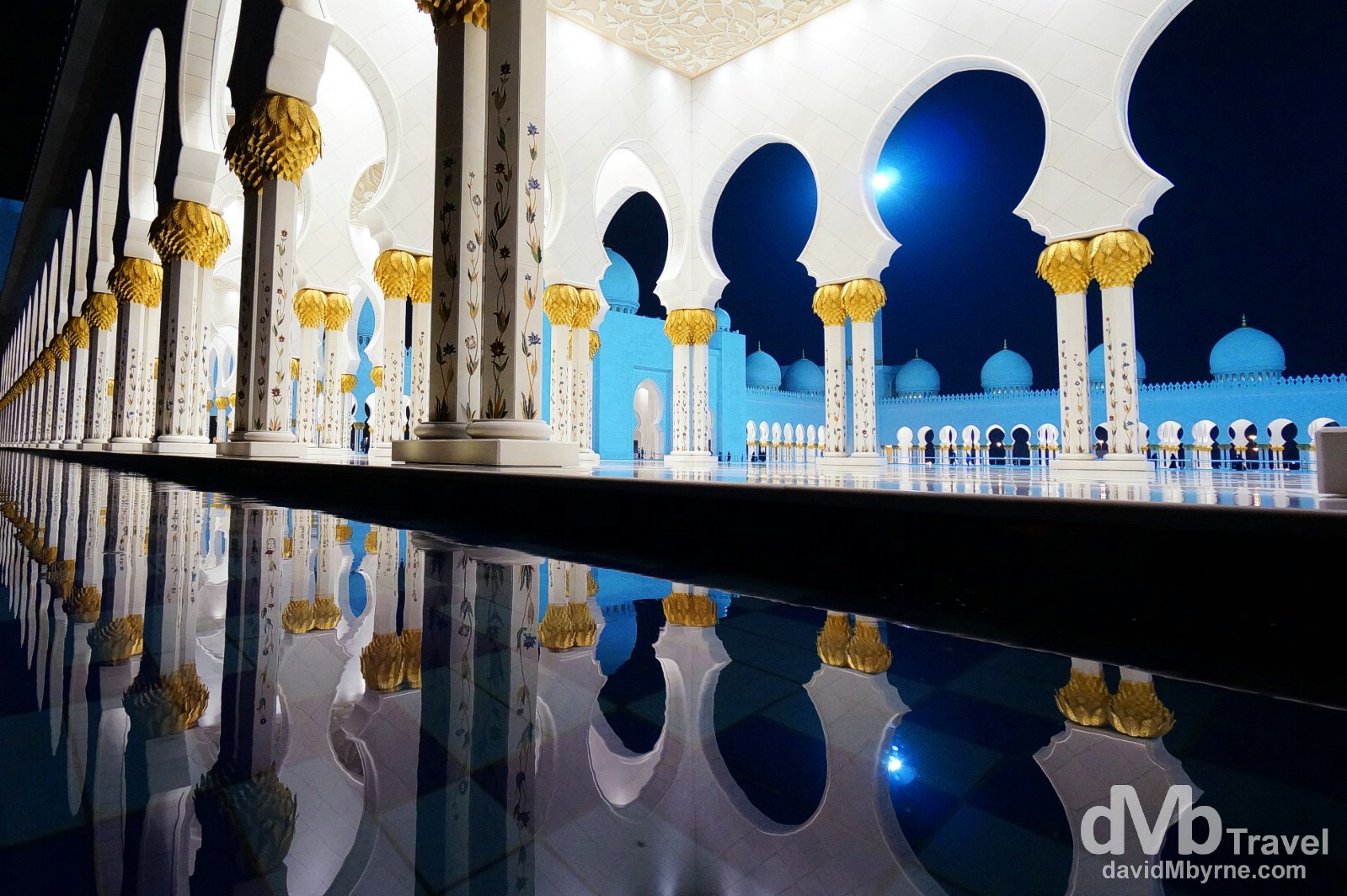 One of the two reflecting pools flanking the mosques east & west sides. These pools played tricks with me; one minute they would be dead calm (like here) and the next they’d be dancing. I didn’t mind either way. A light atop one of the mosques minarets can be seen in this picture. The mosque uses a special lighting system in the evening that follows the phases of the moon – the lights gradually become brighter as the moon becomes full. Neat. A little OTT but kind of expected. Sheikh Zayed Grand Mosque, Abu Dhabi, UAE. April 22nd, 2014 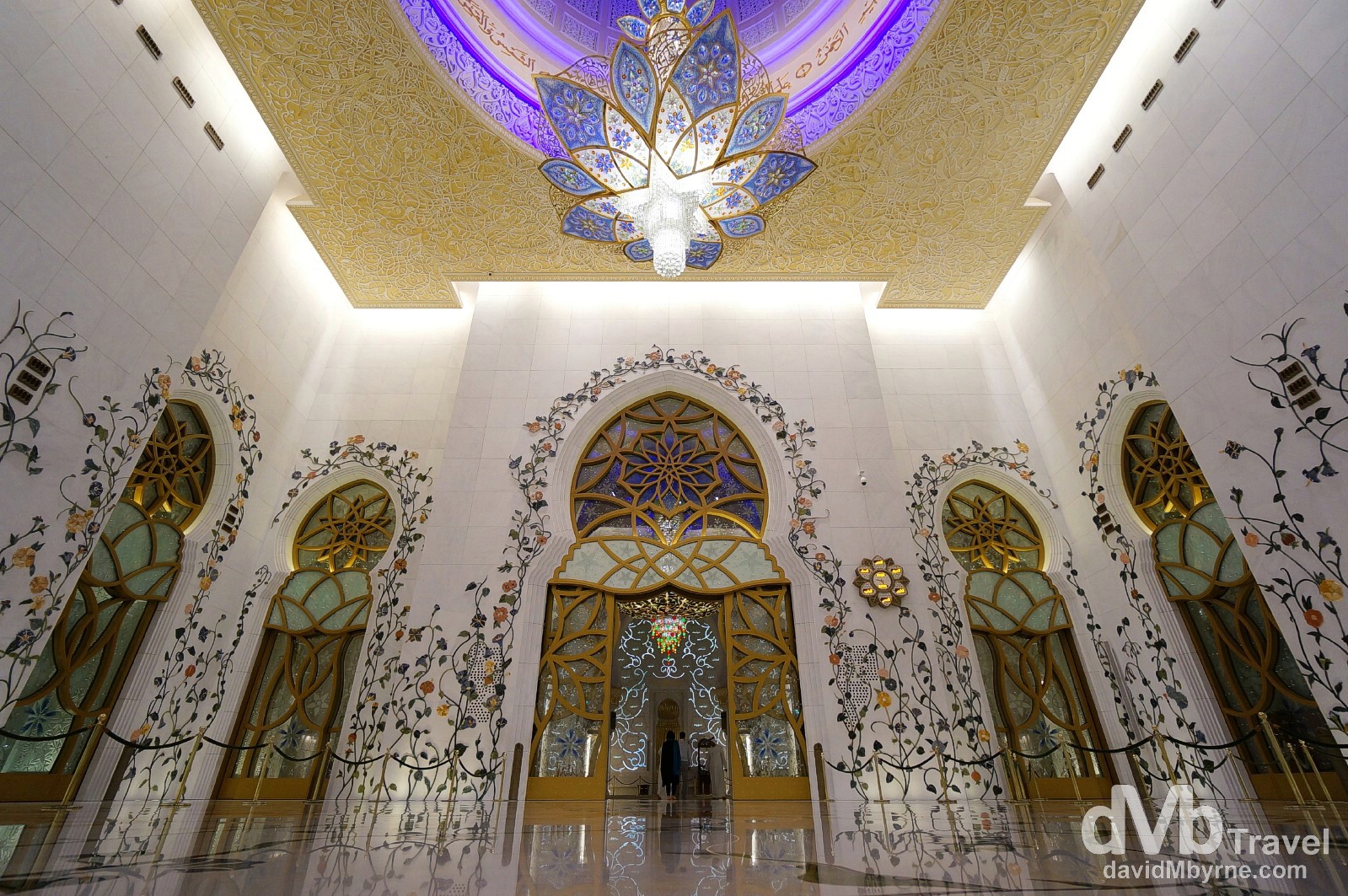 Leading to the Main Prayer Hall of the mosque. The massive doors into the hall open all open sesame like; they glide apart in almost total silence as you approach. It made me stop & look around to see if someone was playing tricks with me. Sheikh Zayed Grand Mosque, Abu Dhabi, UAE. April 22nd, 2014

Big Bus Abu Dhabi Day
Day 2 in Abu Dhabi and I was again a guest of Big Bus Tours as they showed me around the city, a good thing too given the insufferable heat & the spread-out nature of the UAE capital – it’s a 20-30 minute drive from central Abu Dhabi to the Sheikh Zayed Grand Mosque. My first stop on the tour was the city’s Marina Mall. Yes, they have malls here too but not quite on the scale of those found in the shopping nirvana that is neighbouring Dubai. 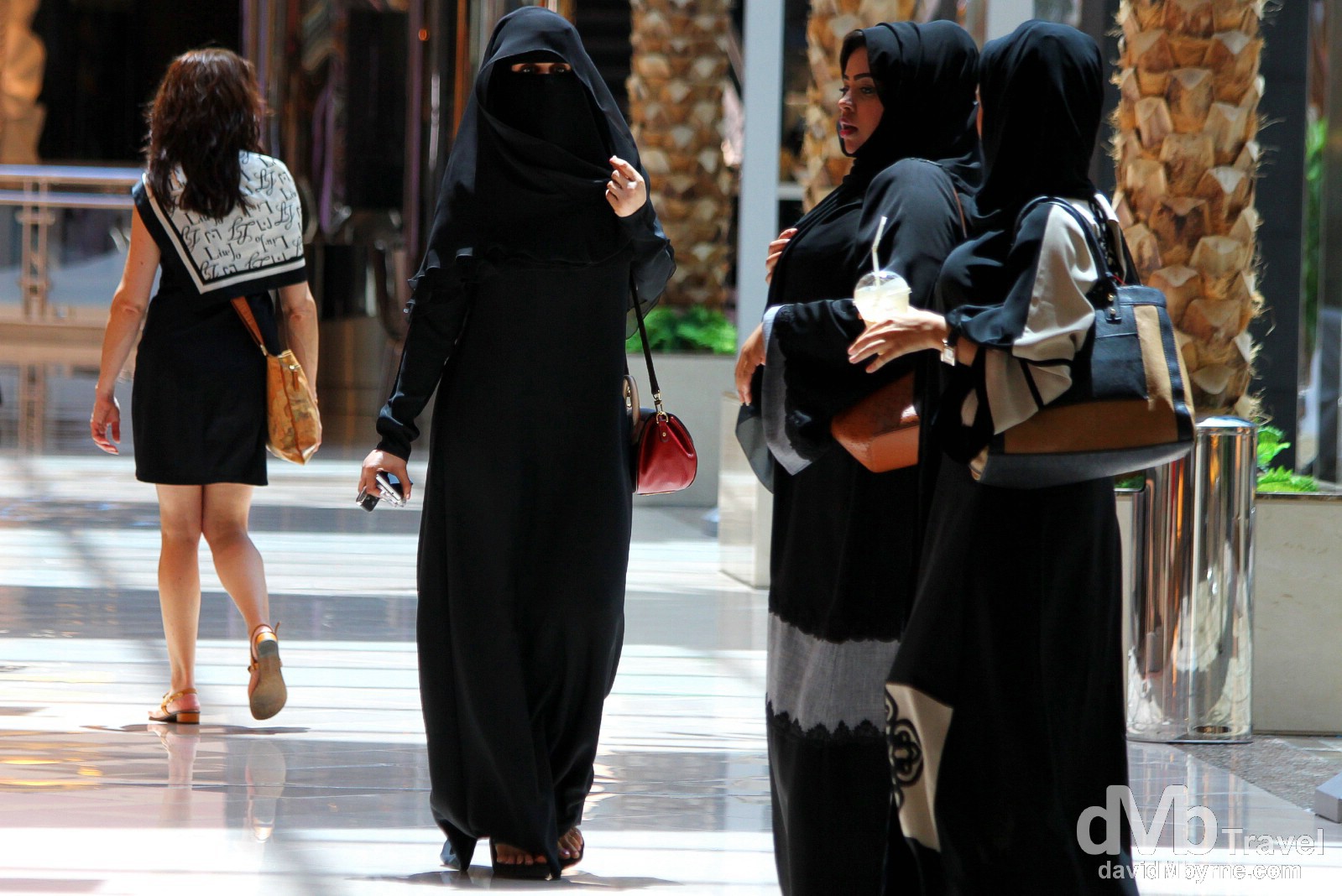 Back to the Sheikh Zayed Grand Mosque this time during the oppressive heat of the mid-afternoon (the sweat was rolling down my face trying to compose this shot) where I played a bit more with repetition, reflections and symmetry. 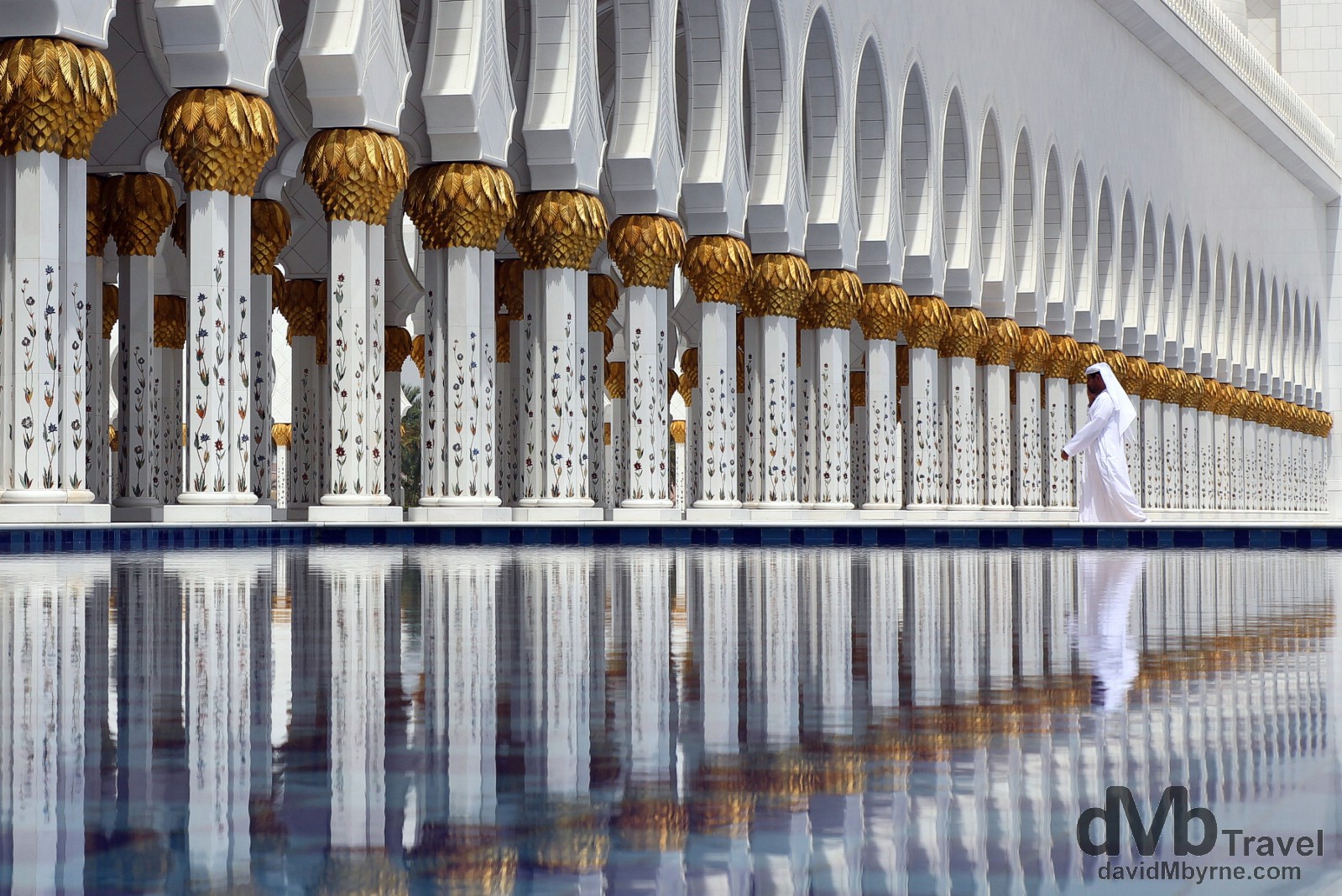 The central courtyard of the Sheikh Zayed Grand Mosque can accommodate 40000 worshipers. The above picture shows two of the mosques 4 107-metre high minarets at the northern corners of the central courtyard, one which boasts the largest marble mosaic in the world – yes, those floral designs are mosaics. The mosque’s architecture was inspired by Persian, Mughal and Moorish designs; its numerous repetitive archways are quintessentially Moorish while its minarets classically Arab in style.

Right, enough from the mosque. 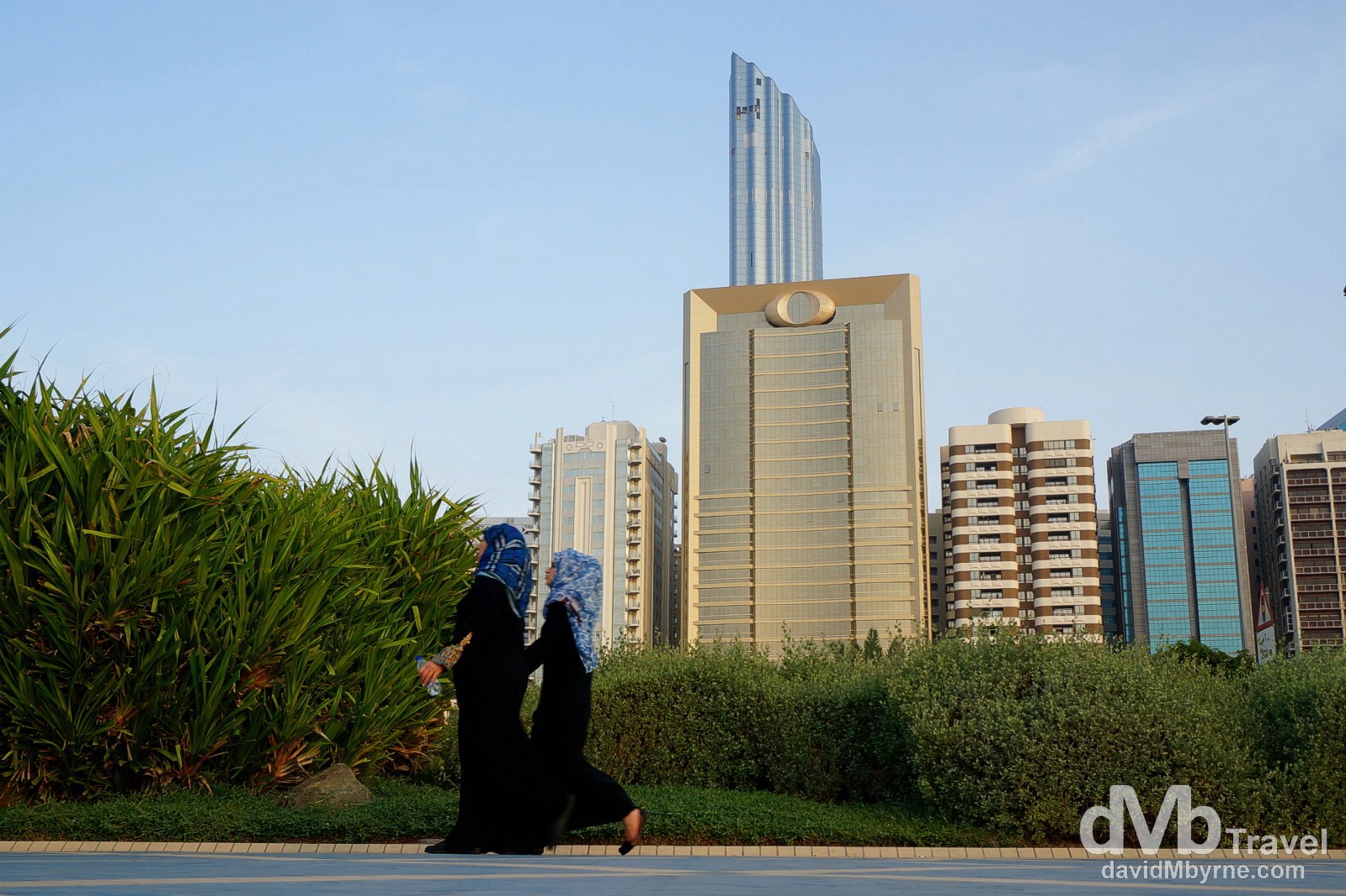 The Abu Dhabi Corniche spreads along an impressive 6 kilometres of waterfront and includes children’s play areas, cycle & pedestrian walkways, cafes, restaurants and the public Corniche Beach. Some of Abu Dhabi’s most impressive buildings (those already built) overlook the Corniche & with the water on one side and the towers on the other it’s a nice place to stroll in the evenings, just as I did last night shortly after arriving in the city from Dubai (& just before paying my first visit to the Sheikh Zayed Grand Mosque). On the Corniche in Abu Dhabi, UAE. April 22nd, 2014 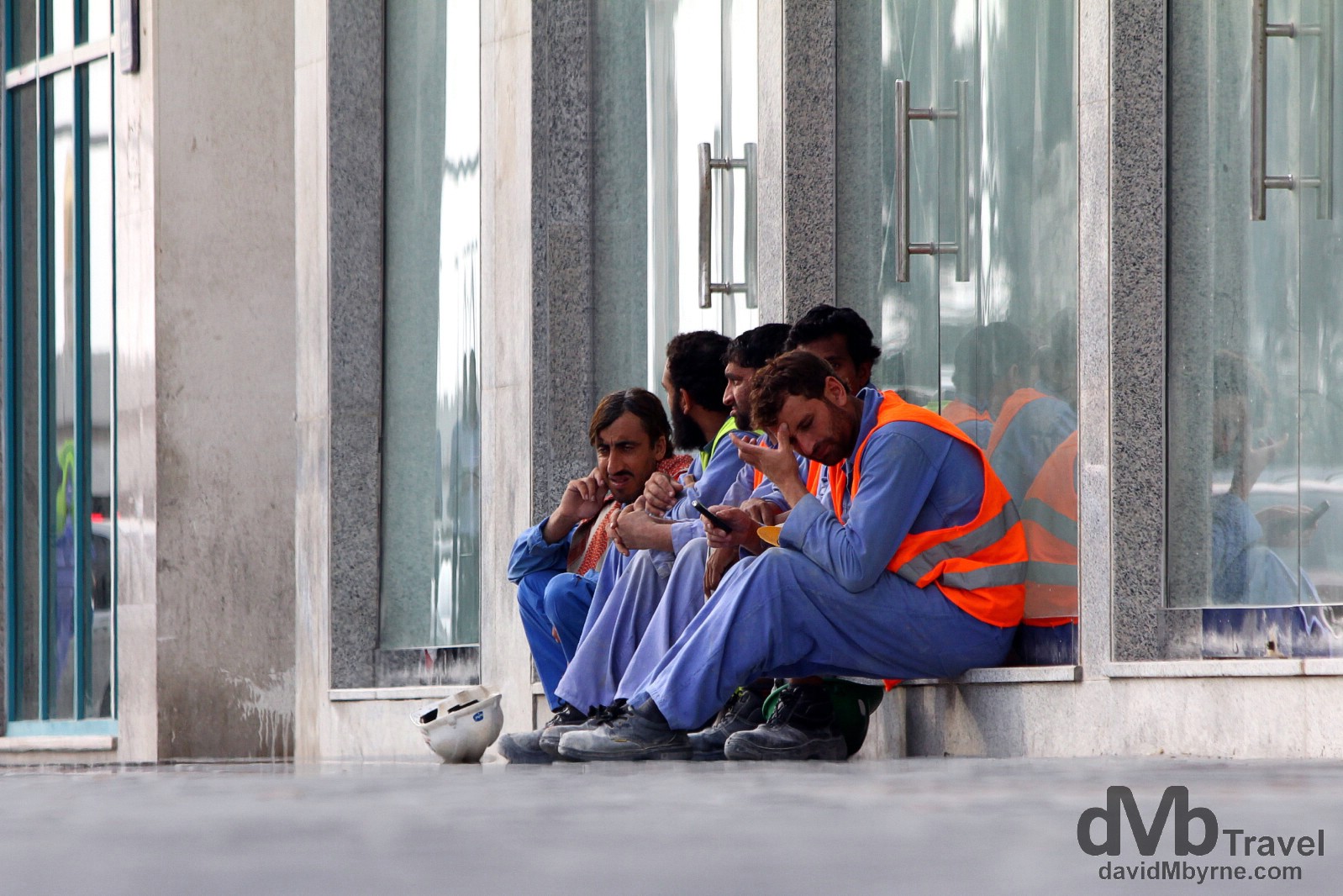 Certain/large parts of present-day Abu Dhabi resemble a building site & just like in Dubai the city is awash with cheap labour from the Indian subcontinent. Last night I sat by the waterfront Corniche watching bus load after bus load of hi-vis, blue jumpsuit-wearing workers being bused back to their accommodations, as happens nightly. This is a picture captured earlier this evening on the streets of central Abu Dhabi of workers waiting for their ride home after a day of work building the new Abu Dhabi. Abu Dhabi, UAE. April 23rd, 2014

Muscat & Rotana Jet
My time in Abu Dhabi, & 2-week stint in the UAE, has come to an end. In the morning I’ll be flying to Muscat in Oman, somewhere I last visited back in 2008. The original plan was to bus it there necessitating a return to Dubai, a pan I gladly put to bed with the discovery of an airline called Rotana Jet offering €50 flights to Muscat from somewhere called Al Bateen Executive Airport right here in Abu Dhabi. All I have to do now is find the aforementioned airport & hope that this unheard of airline doesn’t turn all Jazeera Airways on me and actually remembers to load my luggage.