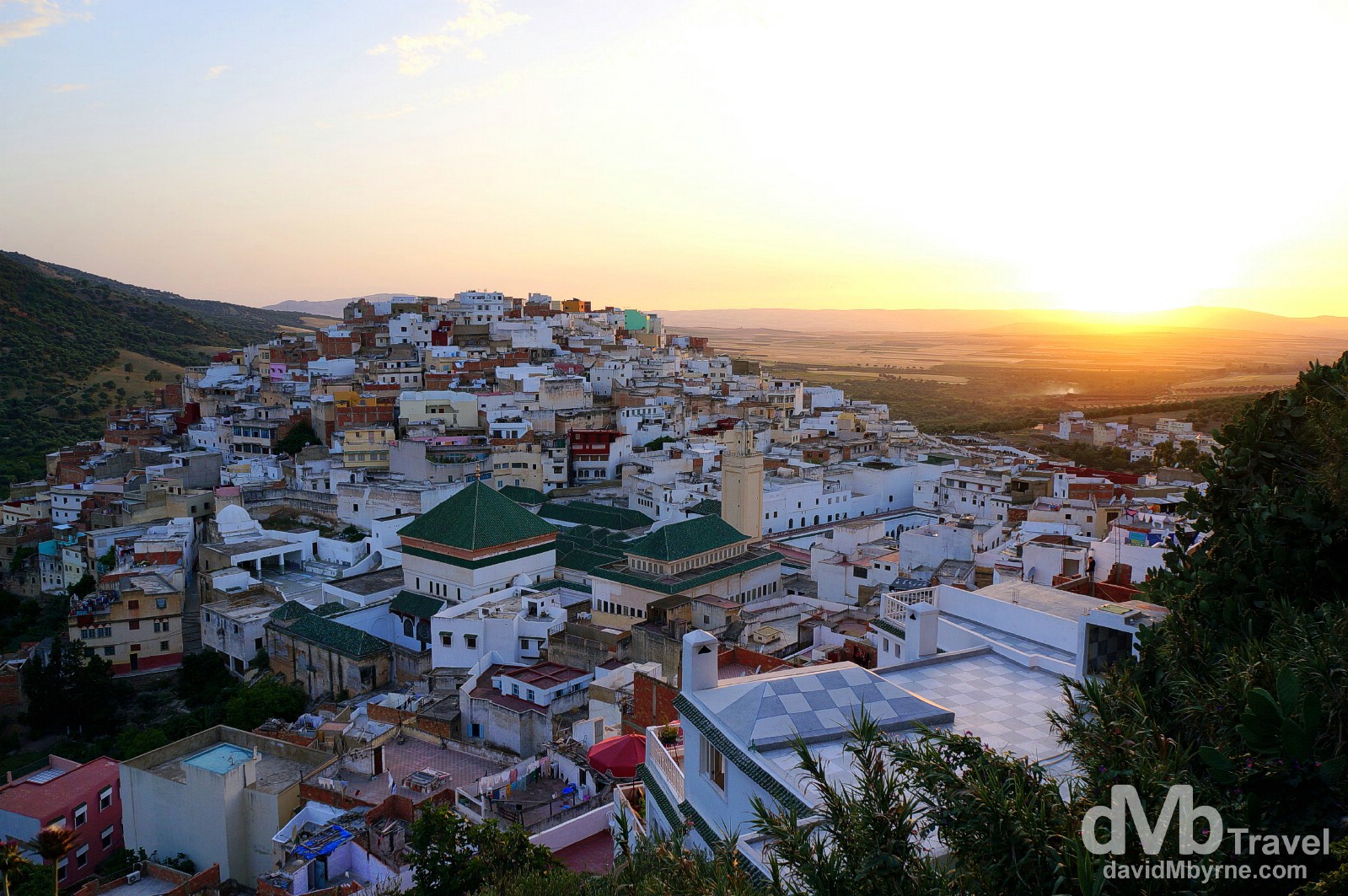 I was initially only planning on a day trip to Moulay Idriss, a small village some 30 kilometres from Meknes in northern Morocco. But a last-minute decision to pack up my stuff and spend a night here instead was made in Meknes yesterday morning over breakfast, a decision that has since turned from one night into two. It happens. As does the unexpected.

I decided to overnight here in Moulay Idriss because reading about the place intrigued me. I was intrigued by Morocco’s holiest town, one in which tourists have only been allowed to overnight in since 2005, the last place in Morocco to keep this religious prohibition. And then once I arrived here I decided to stretch my one night into two thanks to a combination of the town’s charming & picturesque hillside setting; its laid-back, tout & carpet shop-free status; a gorgeous guest house; & my need to get some work done prior to throwing myself into the all-round assault that I expect my next location, Fes, to be. 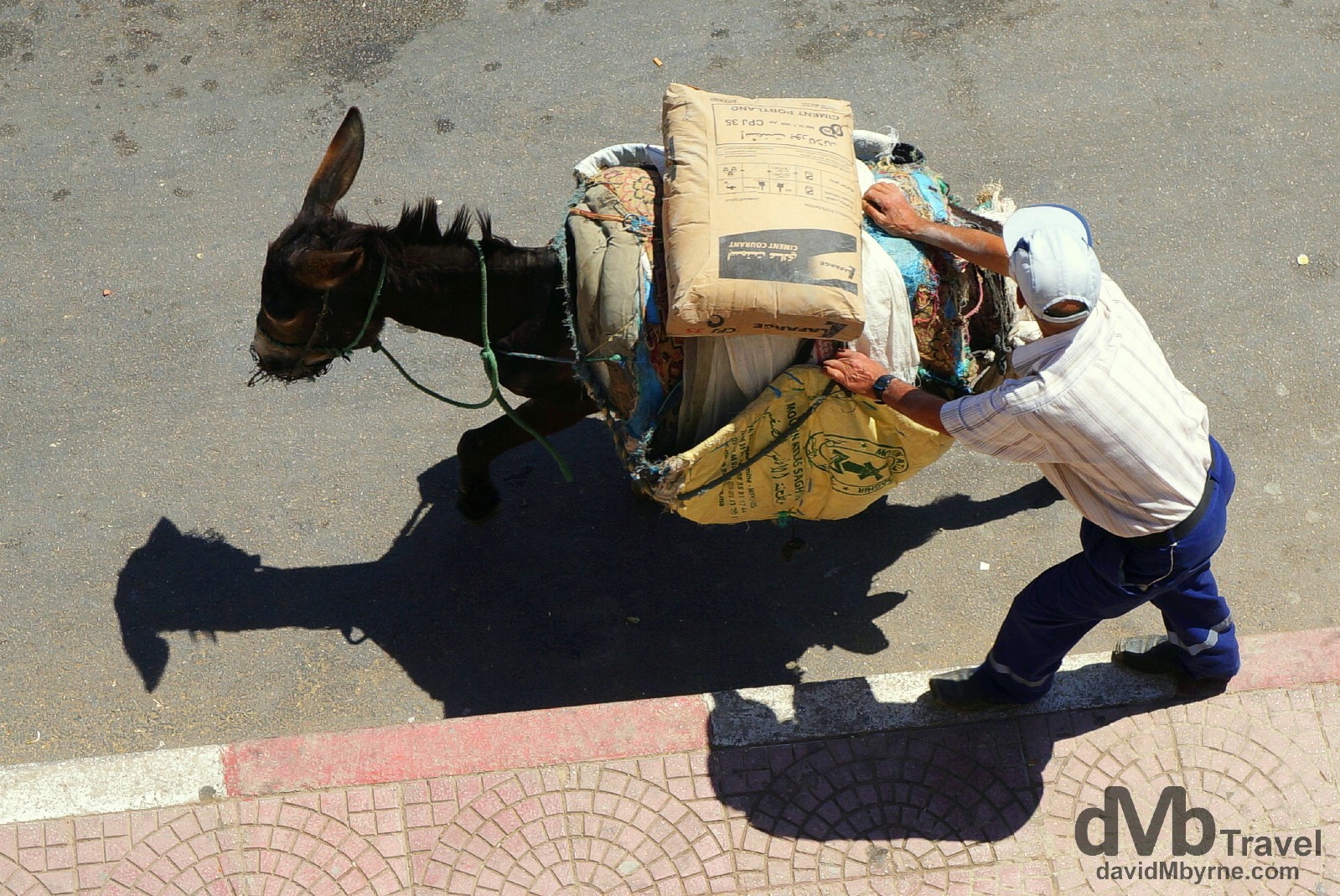 Moulay Idriss
The town of Moulay Idriss takes its name from its founder, Morocco’s most venerated saint and the creator of its first Arab dynasty. Idriss, a great-grandson of the Prophet Mohammed, fled to Morocco from Mecca in Saudi Arabia in around 787. He settled in Volubilis, the Roman Empire’s most southern & remote outpost, and was welcomed by the Romans as an imam, a spiritual & political leader. Idriss then proceeded convert the locals to Islam & in the space of only 5 years had managed to carve out a Muslim kingdom, Morocco’s first, building its capital either side of a small valley some 5 kilometres from harder-to-defend Volubilis (he also went on to found Fes which was largely built by his son, Moulay Idriss II, after Idriss Senior’s death by poisoning 792). The shrine venerating him was built in the town by Moulay Ismail, he who is responsible for many of the buildings in much of present-day UNESCO-listed Meknes, and today it is said that, & via some weird hajj (the fifth pillar of Islam, the pilgrimage to Mecca) credit system, five pilgrimages here to Moulay Idriss is the equivalent to one jaunt to Mecca.

The Moulay Idriss shrine is slap-bang in the centre of the town (marked by the square brown minaret towards the centre of this image) & it draws the devoted year round, but especially in August when the annual moussem (pilgrimage festival) takes place. The shrine is the only show in this quaint little place meaning for the non-devout, non-Muslim like me, for whom the shrine is strictly off-limits, there really is no reason to come here. Of course you could, and should, still come here anyway and do as I did for the past two days: watched the world go by in one of the cafes in the town square; wandered the town’s tangle of mostly dead-end lanes between whitewashed, sugar-cubed houses scattered over the two hills that the town sits astride; visited nearby Volubilis; & took in sunset from the town’s so-called Grand Terrase from where I took this picture earlier this evening (and finding it among the dead ends and wrong turns was a hell of a challenge). Moulay Idriss, Morocco. May 26th, 2014