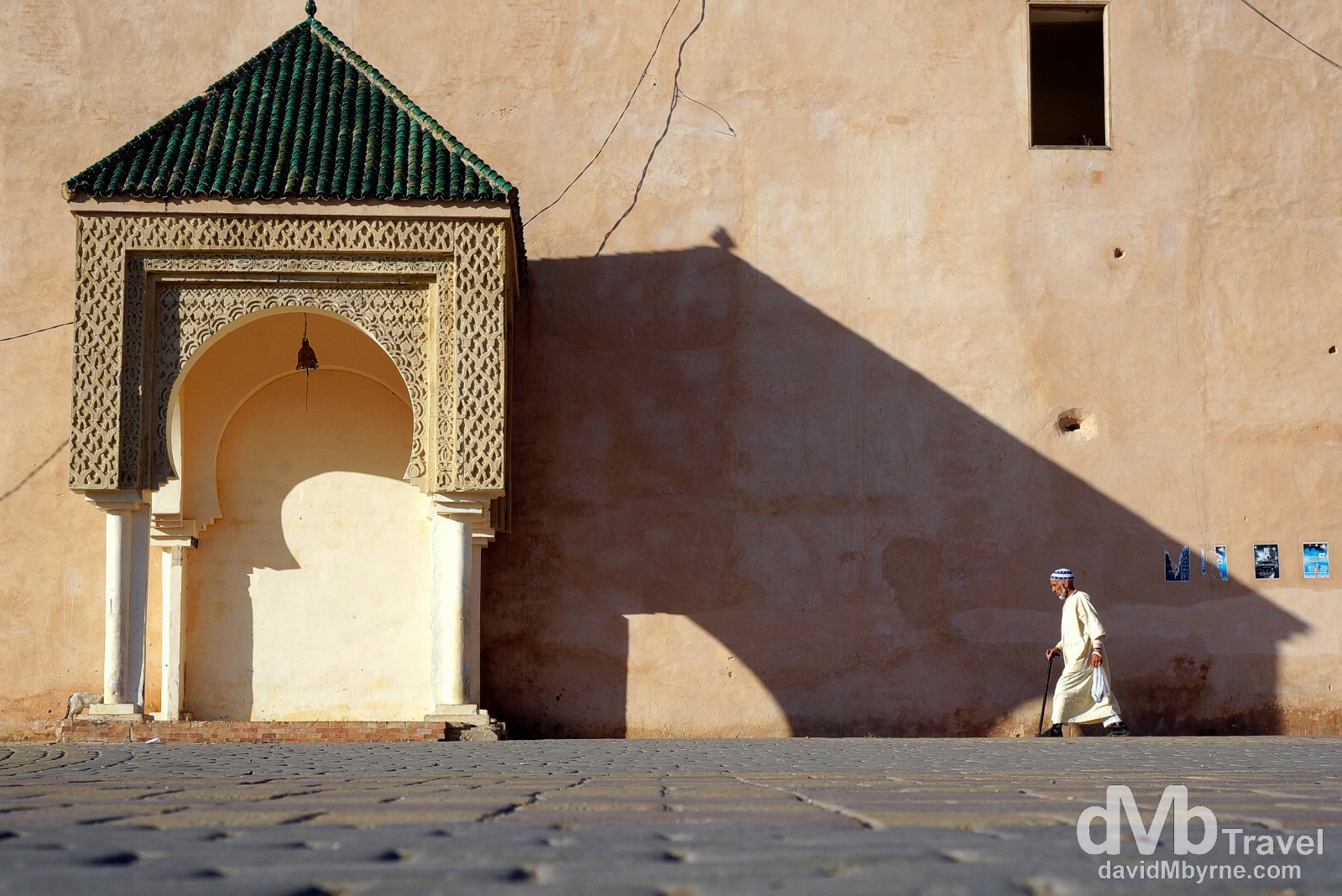 Y esterday I was among the Erg Chebbi dunes of the Moroccan Sahara and today I’m in a city, that city being Meknes, one of Morocco’s 4 imperial capitals (the others being Marrakesh, Fes, my next stop, & Rabat, the present-day capital).

I had read that Meknes was the most laid-back of the 4. I’ve only been here a few hours but the city certainly has been a breeze thus far & the city’s residents seem even friendlier than your average friendly Moroccan – the guy who served me brochettes (small pieces of meat on a skewer) in a roadside café for dinner really eared his 15 dirham (€1.33) tip (& he was genuinely grateful for it too) while the guy who photobombed my efforts to capture the city’s landmark gate, Bab Mansour, was good fun, his questionable fashion sense aside. 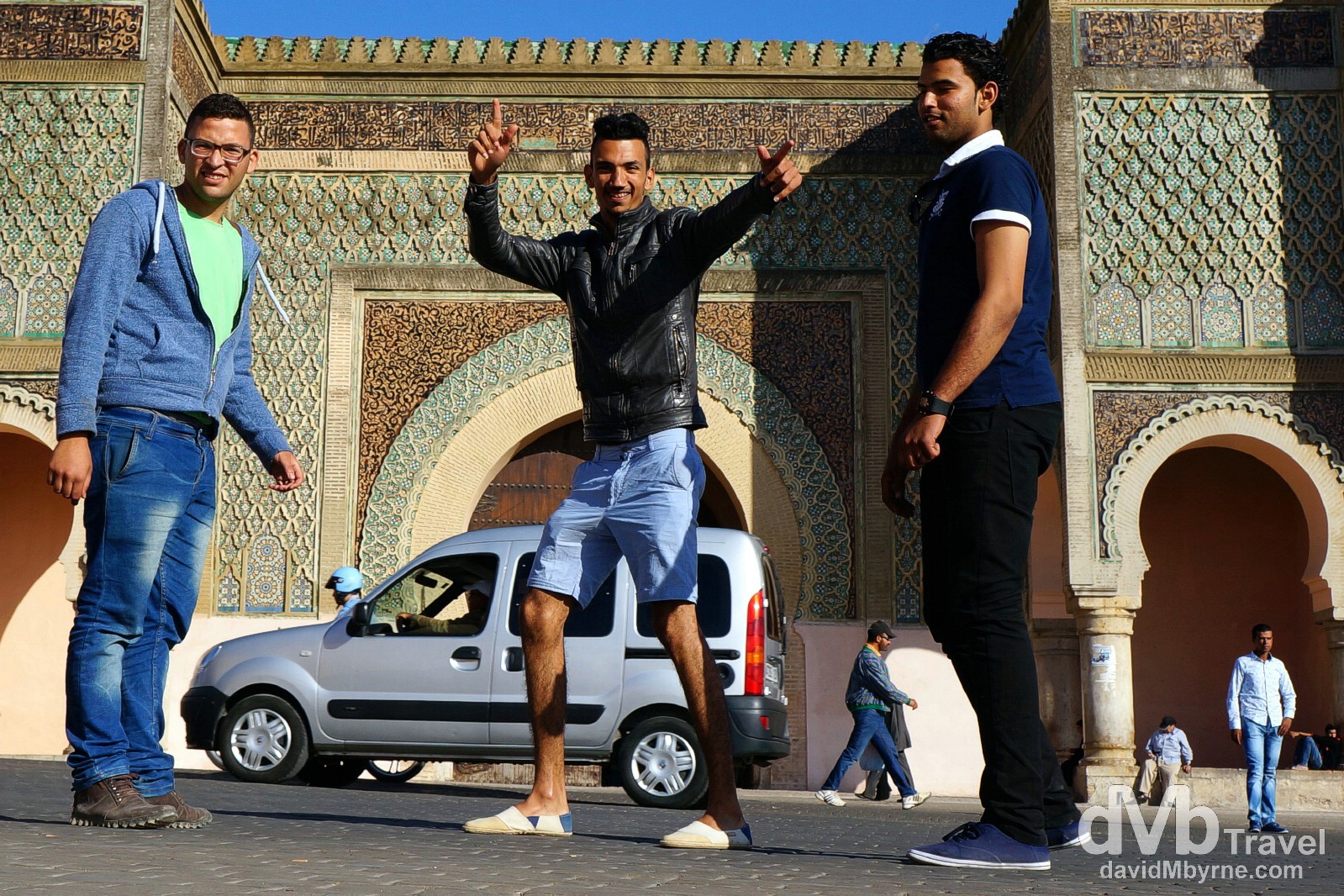 Photobomb in front of the gateway Bab Mansour in Meknes (

Menkes
Moulay Ismail, the brother of the founder of the Alaouite dynasty, the dynasty that still rules Morocco today, founded his capital here in Meknes in 1672. Over the next 55 of his rule the city was endowed with over 45 kilometres of huge walls housing some 20 monumental gates and enclosing about 50 place complexes. Meknes fell into decline after Ismail died in 1727 and not long after the capital was moved to Marrakesh. The passing of time hasn’t been kind to the city but it was awarded UNESCO World Heritage listing in 1996 and in recent years a serious effort has been made to restore & revive the city in the hopes of attracting the tourist dollar.

Founded in the 11th century by the Almoravids as a military settlement, Meknes became a capital under Sultan Moulay Ismaïl (1672–1727), the founder of the Alawite dynasty. The sultan turned it into a impressive city in Spanish-Moorish style, surrounded by high walls with great doors, where the harmonious blending of the Islamic and European styles of the 17th century Maghreb are still evident today.

– UNESCO’s introduction the The Historic City of Meknes 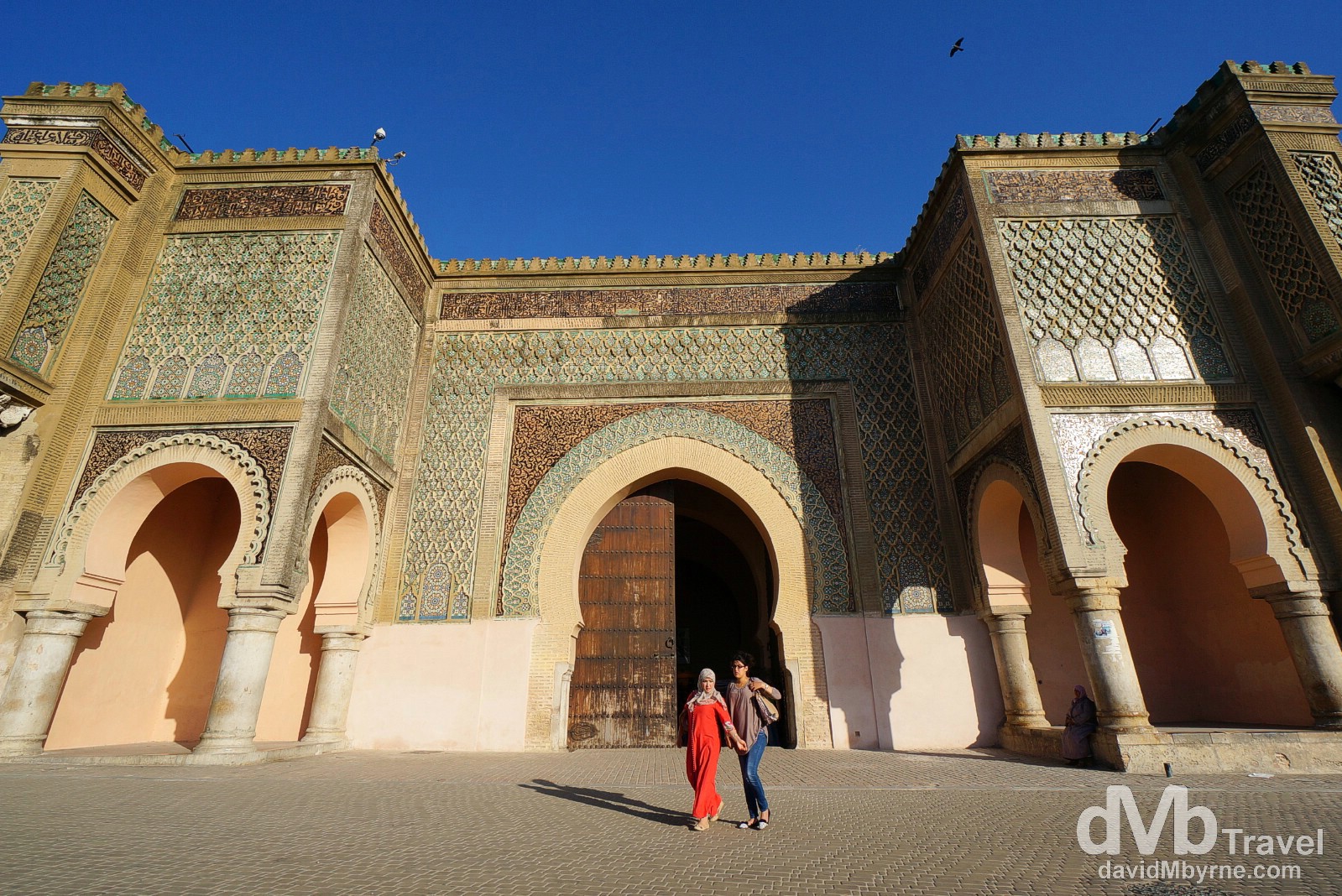 The Bab Mansour Gate, Morocco’s most impressive imperial gate, is today, as it was back then, the centrepiece of the city’s ensemble of walls and gateways & gave access to an area called Dar el Kebira, the imperial palace complex – today the gate’s distinctive horseshoe shaped arch provides shelter for a small arts & crafts market. Rich in design & well preserved, it is flanked by purely decorative bastions & the whole shebang looks great when bathed in late afternoon sunlight just like it was this afternoon. Bab Mansour, Meknes, Morocco. May 23rd, 2014

Shadows in Place el Hedim (Square of Demolition & Renewal) fronting Bab Mansour. The square is a smaller, less hectic version of the famed Djemma El-Fna in Marrakesh. However, & unlike in Marrakesh, one can safely take pictures here without being accosted for money. Meknes, Morocco. May 23rd, 2014

Meknes is a pretty city, the monuments from the city’s imperial past the highlight of any visit. I only took a quick, relaxed stroll around this afternoon to get my bearings. I’ll take a more in-depth look at the city tomorrow including delving into its many souks (markets). A souk is always an assault on all fronts but seemingly the souks here are less work than souks elsewhere in Morocco, something I can now well believe.

’T was overcast today in Meknes, a perfect indoorsy kind of day. I spent it moseying from one city highlight to another, taking a few pictures as I went. Zellij (a mosaic arranged in a decorative pattern) tile work, pointed horseshoe arches & wide-angle grandeur were (again) the order of the day, day 28 of my Moroccan odyssey. At this stage it’s all getting a bit repetitive, just like the oh-so pretty zellij patterns themselves, but still thoroughly enjoyable. 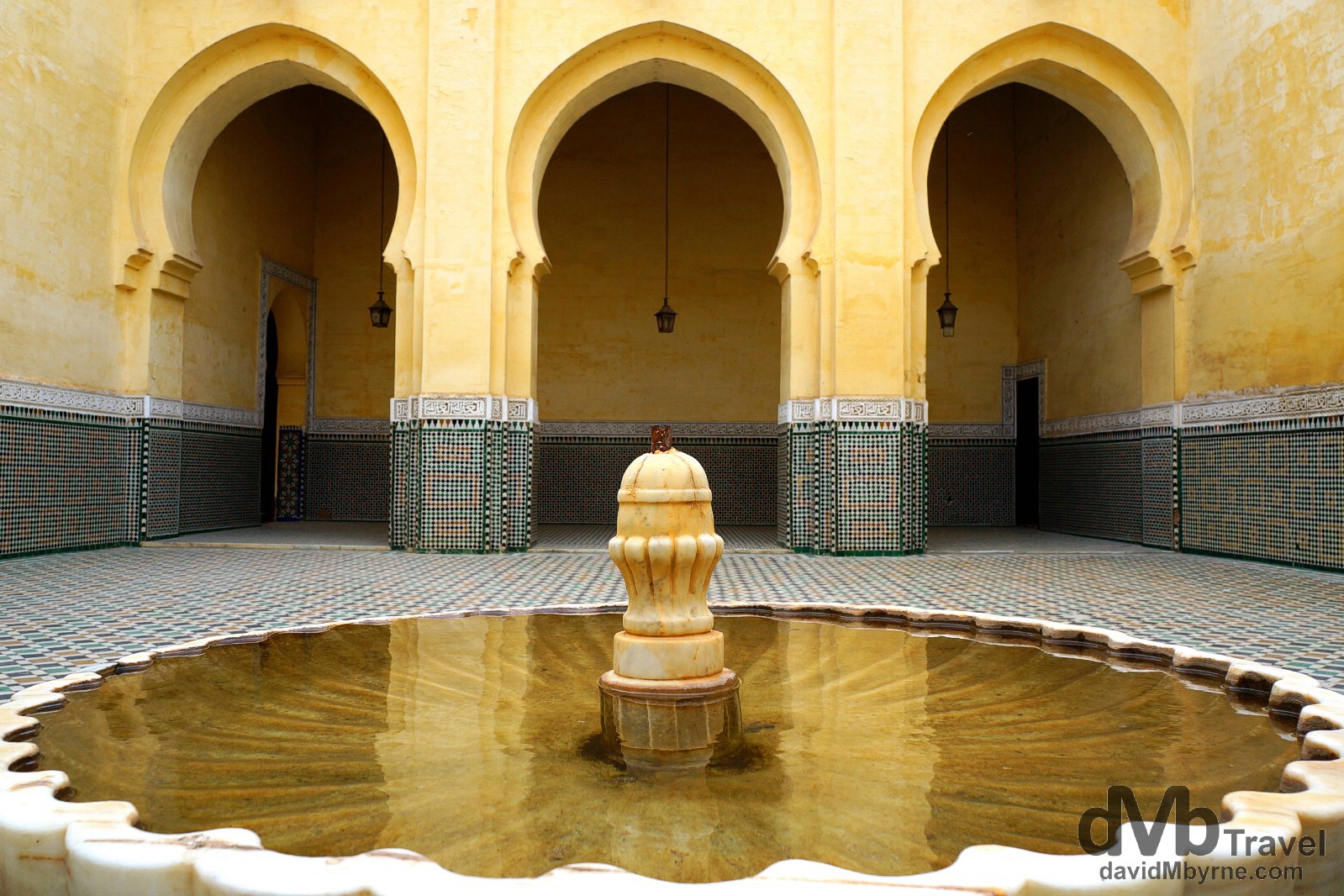 I visited a few sites today but my favourite was this, the Mausoleum of Moulay Ismail, the Sultan of the Alaouite dynasty who founded his capital here in Meknes in 1672 & who built much of the present-day city. The mausoleum, one of only three active shrines in the country that non-Muslims my visit, was built before Ismail died so it was ready to go when he popped his clogs in 1727. By all accounts he was quite the tyrant but still very much revered in Morocco, even to this day. I loved the colours & symmetry of one of the mausoleum courtyards as seen here & I especially loved the awesome zellij mosaics of the stunning main tomb hall (next two pictures). Moulay Ismail Mausoleum, Meknes, Morocco. May 24th, 2014 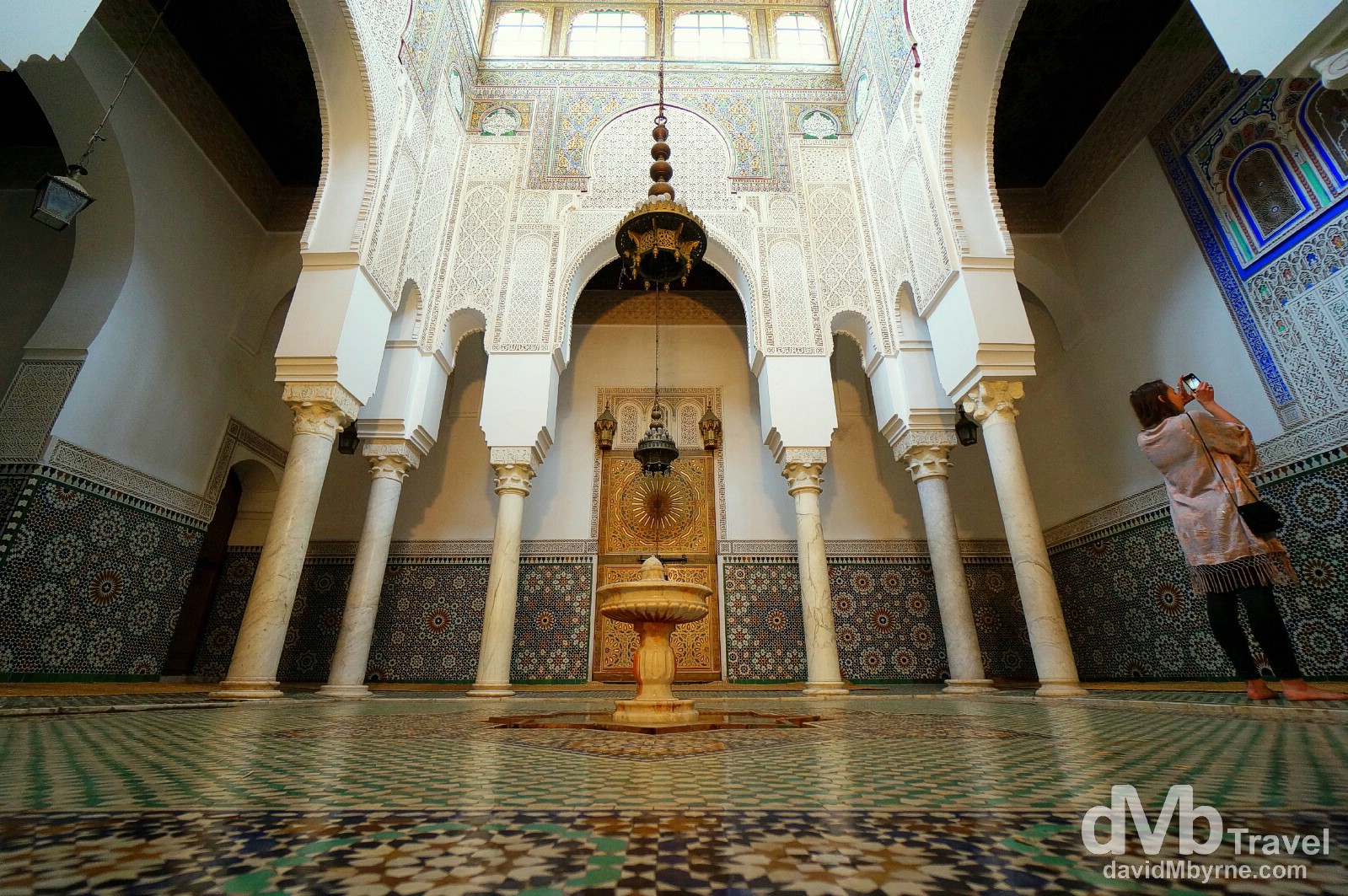 A section of the tomb hall of the Moulay Ismail Mausoleum. This is quite a small little room off the main (sectioned off) tomb chamber. The craftsmanship on display is stunning, some of the best on display in Morocco. Meknes, Morocco. May 24th, 2014 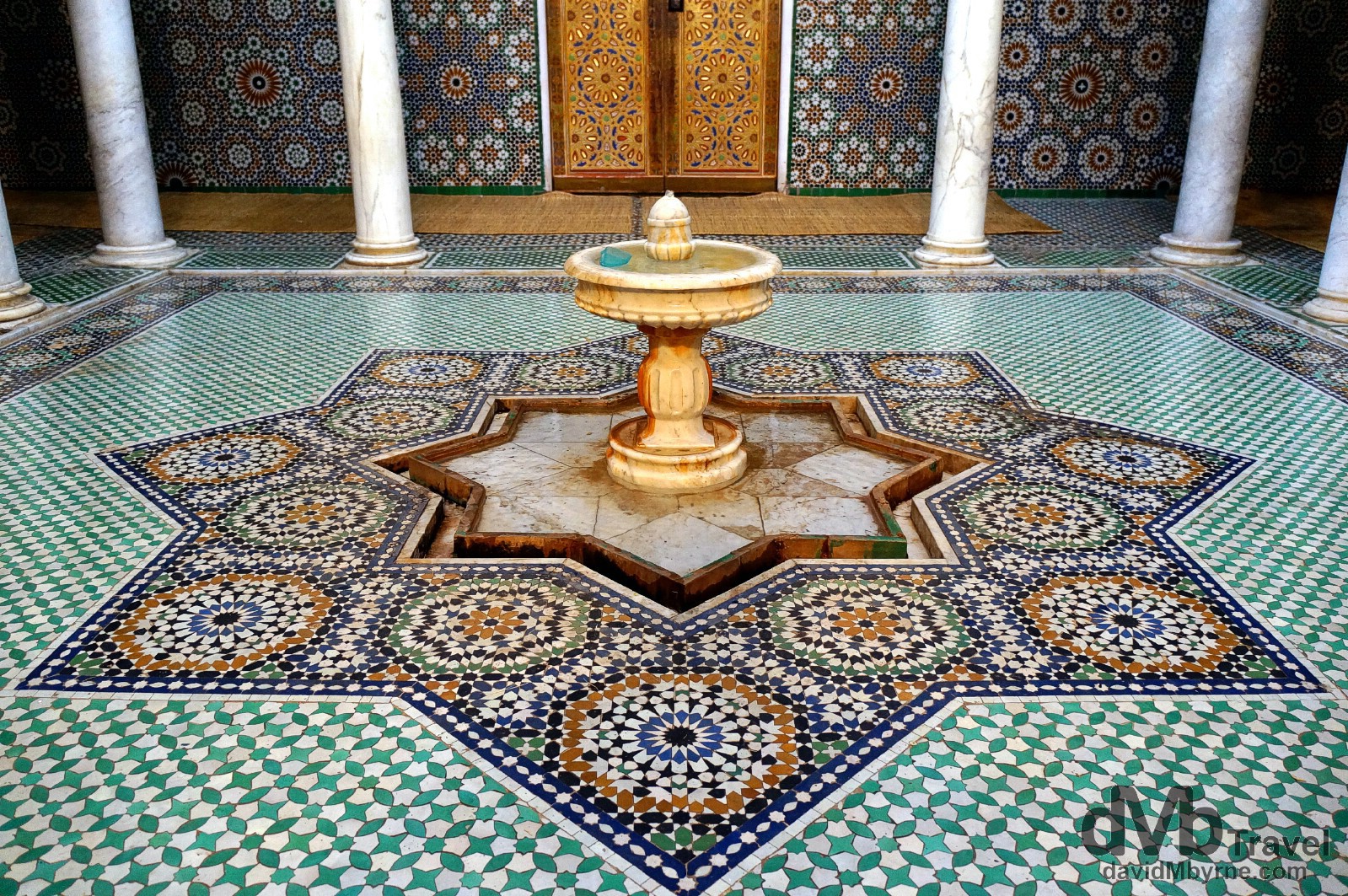 I’ve seen a quite a bit of zellij tile work in Morocco so far (needless to say it’s everywhere) but I really liked the patterns and detail in here. The tomb hall of the Moulay Ismail Mausoleum, Meknes, Morocco. May 24th, 2014

Medersa Bou Inania
I stopped by the 12th century Medersa Bou Inania, a medersa being a religious school for Islamic studies. This medersa was smaller & slightly less photogenic than the first medersa I visited some time ago now, the Ali ben Youssef Medersa in Marrakesh, but I did have this medersa all to myself – there are not too many fellow tourists here in Meknes as nearby Fes seems to siphon them all off. I paid a visit to the medersa roof from where the views of the minaret of the neighbouring Grand Mosque were pretty cool (I uploaded a picture of the minaret to my Instrgram account here) and from where I captured the following picture of a man surveying the view over the top of a section of the UNESCO-listed Meknes medina. 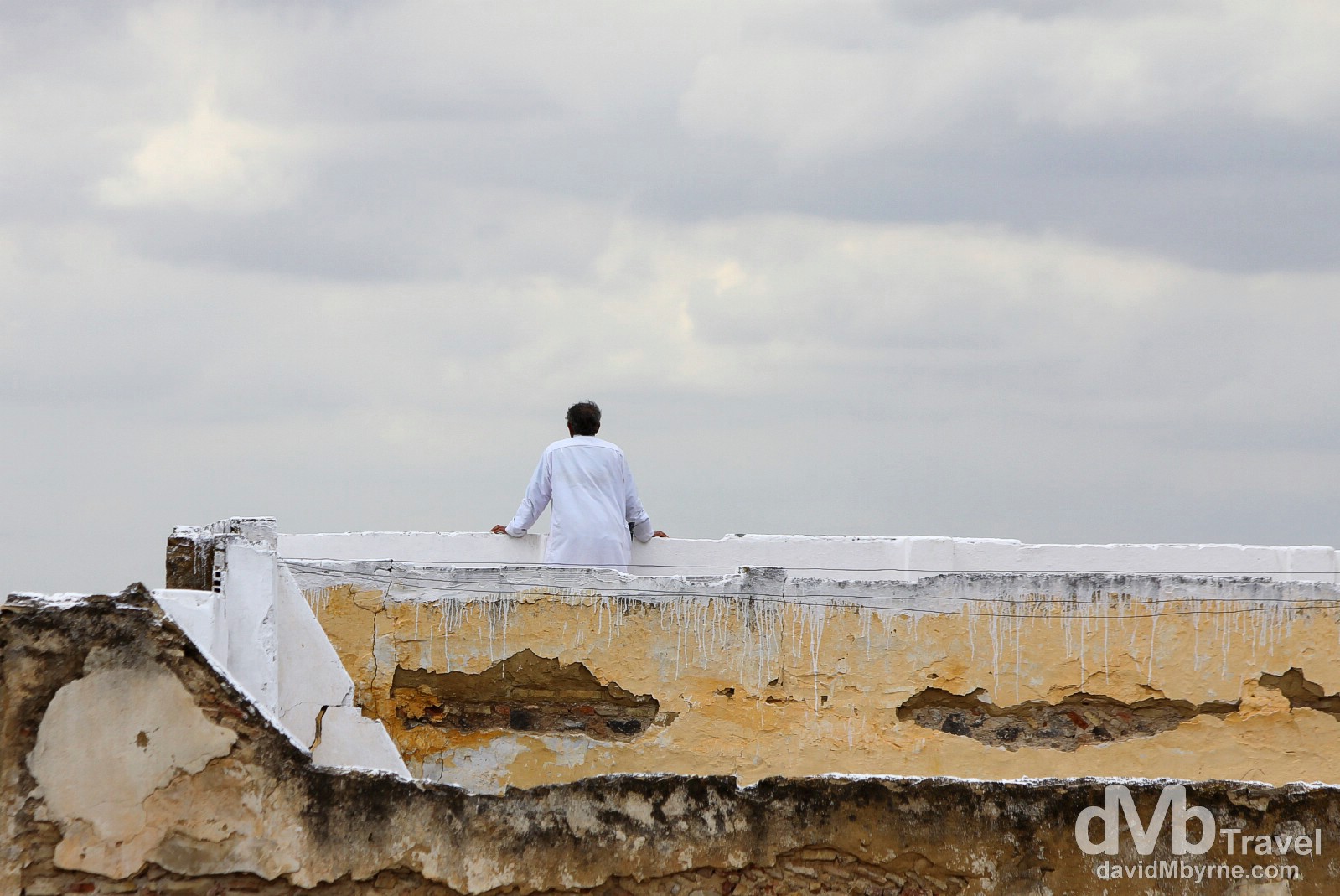 Looking over the rooftops of the medina in Meknes, Morocco, as seen from the roof of the Medersa Bou Inania. May 24th, 2014

Tomorrow I’ll be leaving Meknes but only for the day (I’ll leave the city for good the day after). I’ll be visiting a few sites about 30 kilometres outside the city, one of which is a UNESCO World Heritage site, the Roman ruins of Volubilis, the best preserved archaeological site in the country. Yes, the Romans were here in the past and tomorrow I’ll be taking a look at what has been left behind of what they left behind.