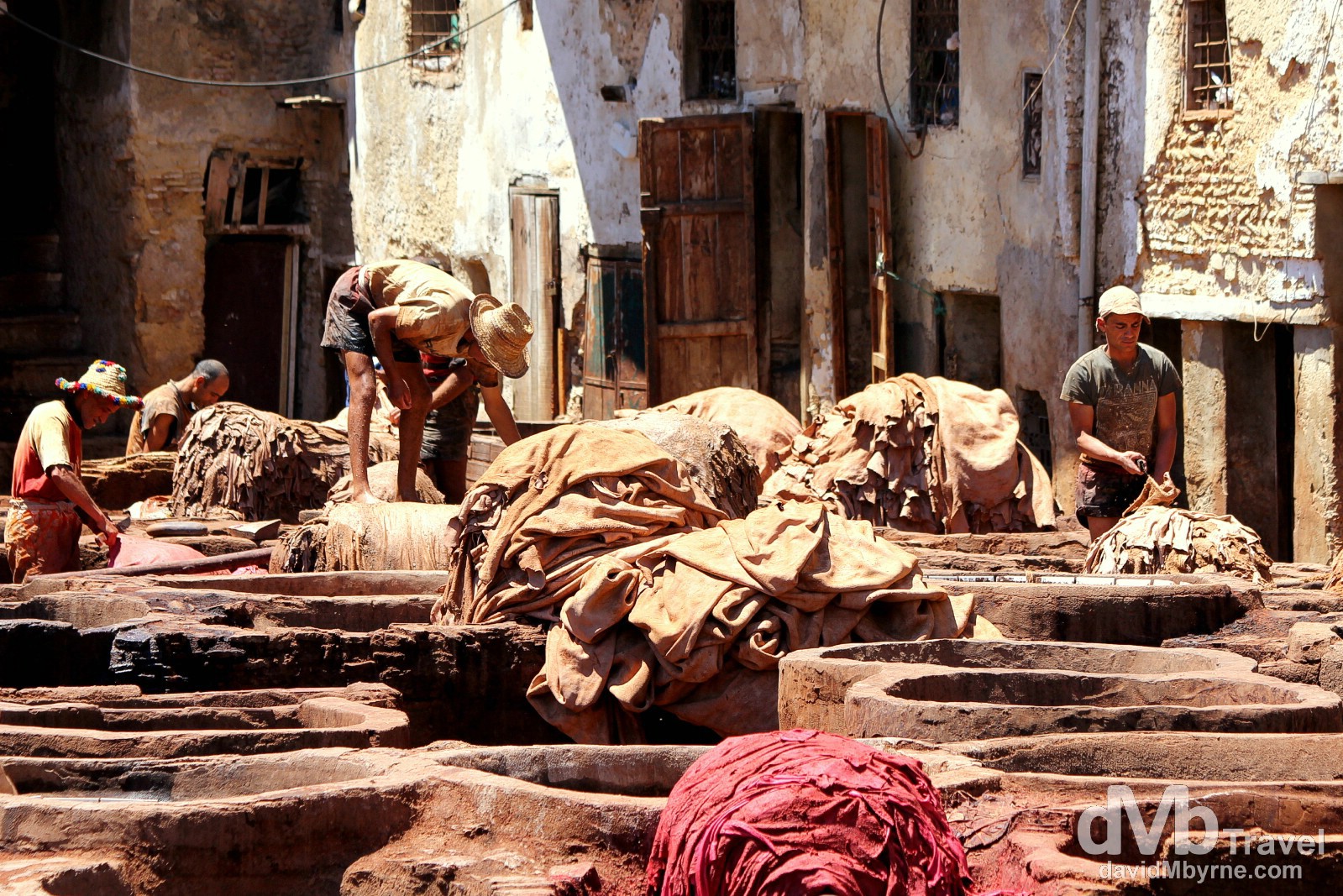 F es was nowhere near as exhausting as it could have been. I guess I was prepared, having already spent 31 days in Morocco before arriving in the city, one of Morocco’s 4 imperial capital cities, a few days ago. It has been a fun few days not to mention a photographic treat. 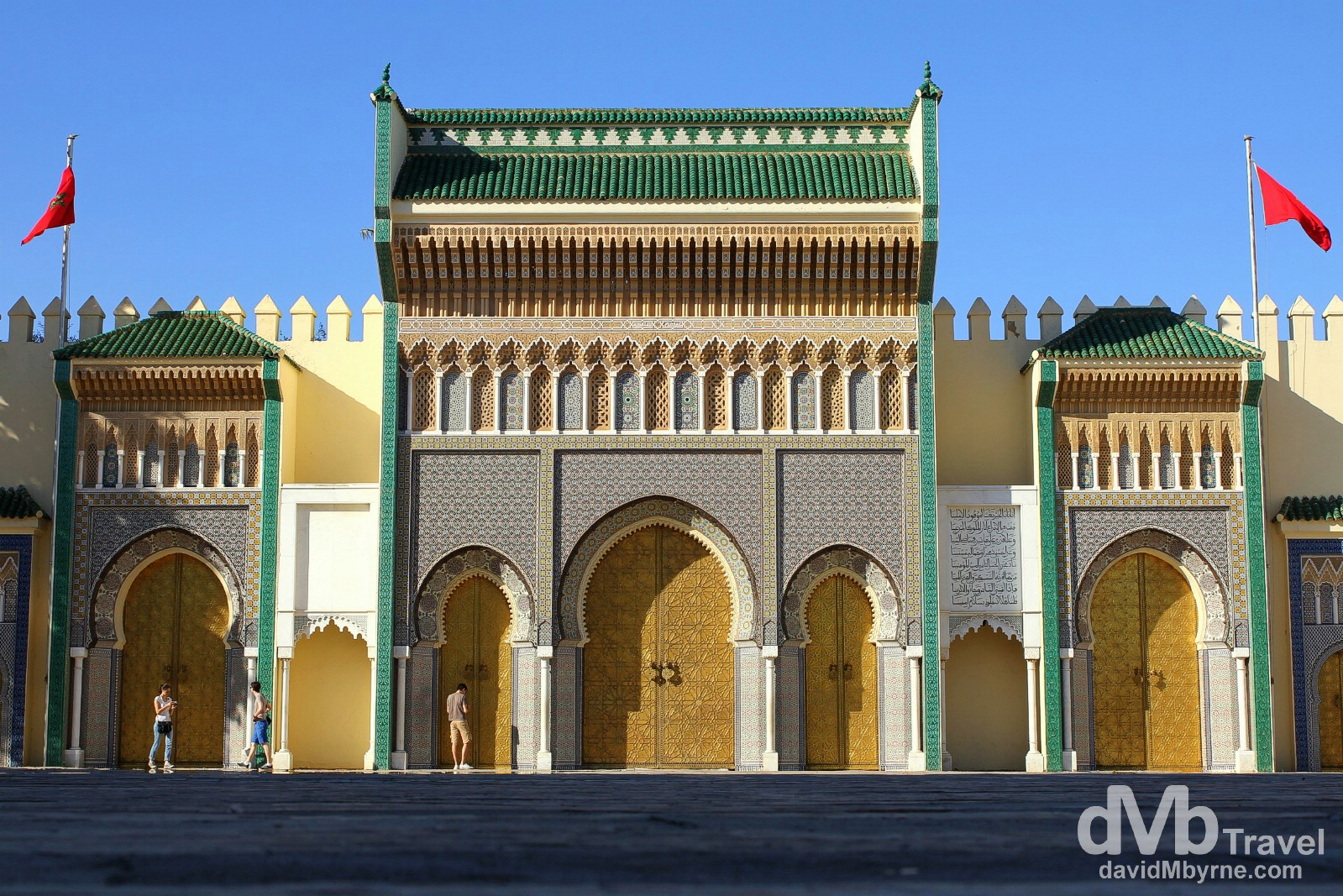 One of the very impressive ceremonial gates marking the entrance to the Royal Palace in the Fes el Djedid (New Fes) district of the city. The palace itself is off-limits to all but the (extraordinarily wealthy) Moroccan Royal Family and as I’m not a member of said family I had to make do with photographing sections of its (extraordinarily photogenic) exterior. This is the only picture I’m presenting from my time in Fes that was not captured within or of the city’s UNESCO-listed medina in the Fes el Bali (Old Town) district of the city, where I roomed & spent the vast majority of my time over the last three days. Outside the Royal Palace, Fes el Djedid, Fes (

Fes has for the past ten centuries stood at the heart of Moroccan history as both an imperial capital and intellectual as well as spiritual centre. Unique in the Arab world, preserving the appearance and much of the life of a medieval Islamic city, it boasts as many monuments as Morocco’s other Imperial capitals combined, while the souks (markets), extending for over a mile, maintain the whole tradition of urban crafts. 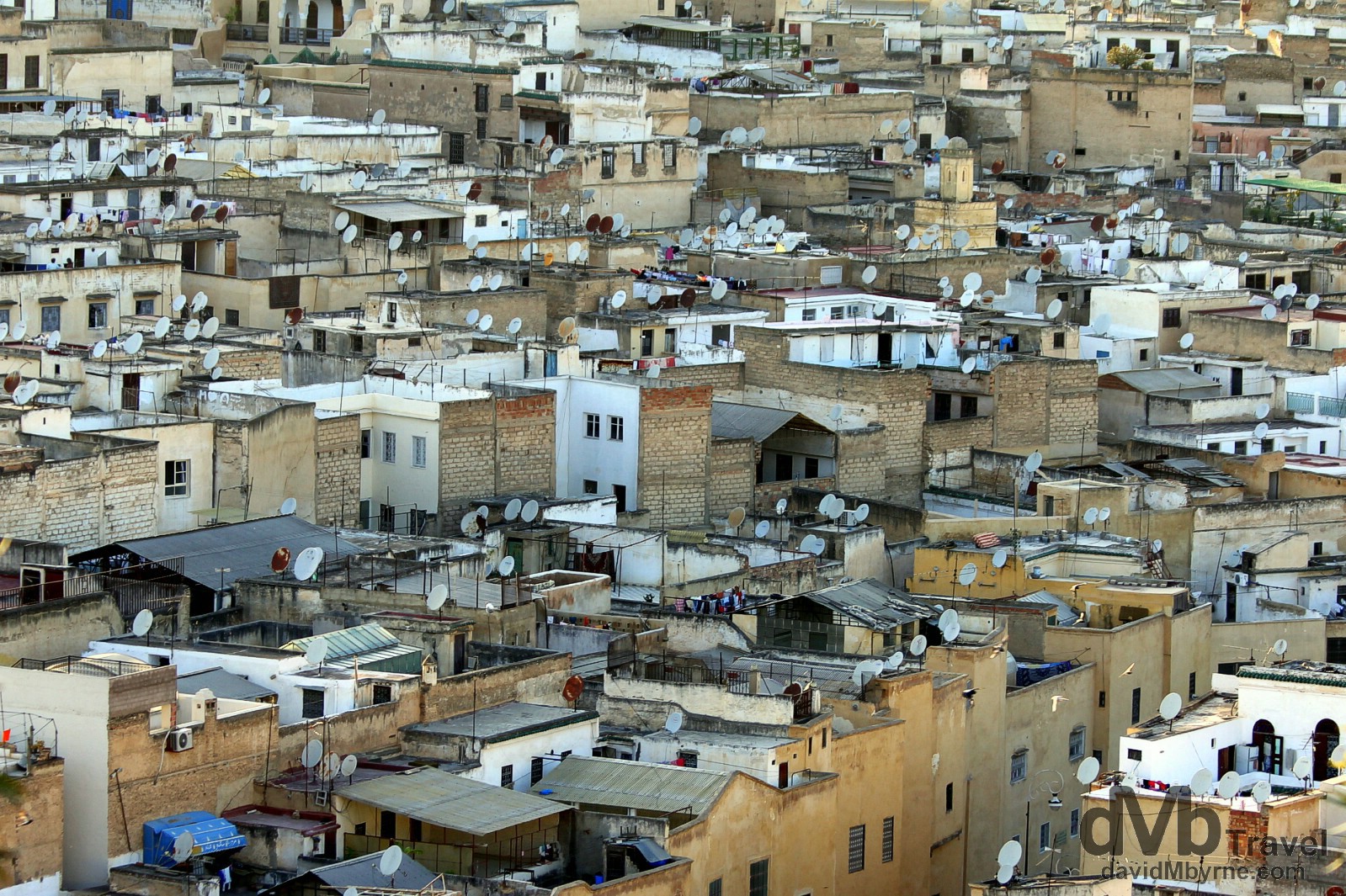 Fes || Old & Even Older
The most ancient of Morocco’s four imperial capitals and the most complete medieval city of the Arab world, Fes is a place that has dominated Moroccan trade, culture & religious life for over a thousand years. The city was founded by Moulay Idriss in late 8th century, although most of the city’s early development is attributed to his son, Moulay Idriss II, whose mausoleum is one of the most important buildings in Fes. Over the years the city attracted all kinds of refugees but, and more importantly, it also attracted artisans & scholars who helped it to grow to become an important centre of advancement, religion & learning – this is the city that boasts of having the world’s first ever university. The city’s golden era was in the 13th century under the Merenid dynasty when it replaced Marrakesh as the Moroccan capital – the Merenids were responsible for the Fes medina in Fel el Bali (Old City) but they also expanded the city with the construction of the Fes el Djedid (New but-still-over-700-years-old Fes) district where the Royal Palace is located. Fes went into decline under successive dynasties before the French came along and, as they did in most other Moroccan cities, built their Ville Nouvelle district complete with wide tree-lined boulevards, expansive plazas & gushing fountains. However, the old (Fes el Djedid) & even older (Fes el Bali) parts of the city continued to decline right up until the end of the 20th century and if not for the attentions of UNESCO and its Cultural Heritage preservation plan then most of Fes might just have fallen into total ruin – although many areas of the city look to be in total ruin already. 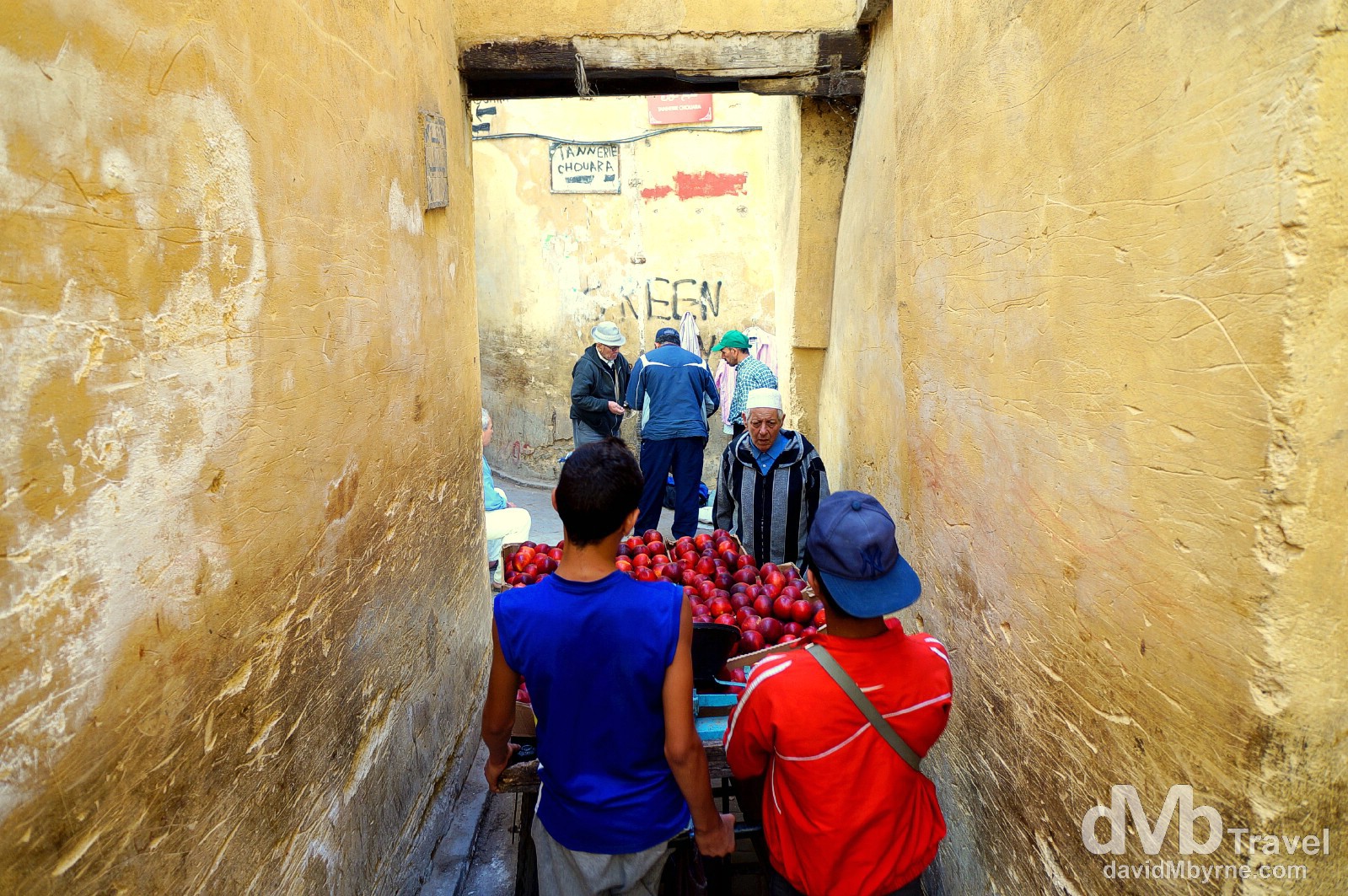 Derb Mechattin, one of the numerous lanes of the medina of Fes el Bali (Old Fes), Fes, Morocco. May 29th, 2014

The Fes el Bali (Old Fes) Medina
Granted UNESCO World Heritage status in 1981, the first site in Morocco to gain UNESCO listing, today the Fes el Bali (Old Fes) medina is, & just like it has been since medieval times, a warren of narrow, dilapidated, atmospheric lanes full of medersas (religious schools), fondouks (inn & storehouse), palaces, residences, mosques, fountains, souks (markets), people (locals, shopkeepers, beggars & tourists), freight-laden mules, twisting alleys, blind turns, & general mayhem. I’d read before arriving in the city that it takes weeks to come to terms with navigating the medina lanes, if one manages it at all (I personally doubt any non-Fassis, a Fes resident, ever would). I didn’t have weeks so I was quite content to follow the advice of American author Paul Bowles by staying nicely lost for the three days I did have at my disposal, days I spent wandering aimlessly here, there and everywhere.

Founded in the 9th century and home to the oldest university in the world, Fez reached its height in the 13th–14th centuries under the Marinids, when it replaced Marrakesh as the capital of the kingdom. The urban fabric and the principal monuments in the medina – madrasas, fondouks, palaces, residences, mosques and fountains – date from this period. Although the political capital of Morocco was transferred to Rabat in 1912, Fez has retained its status as the country’s cultural and spiritual centre.

UNESCO commenting on Medina of Fez 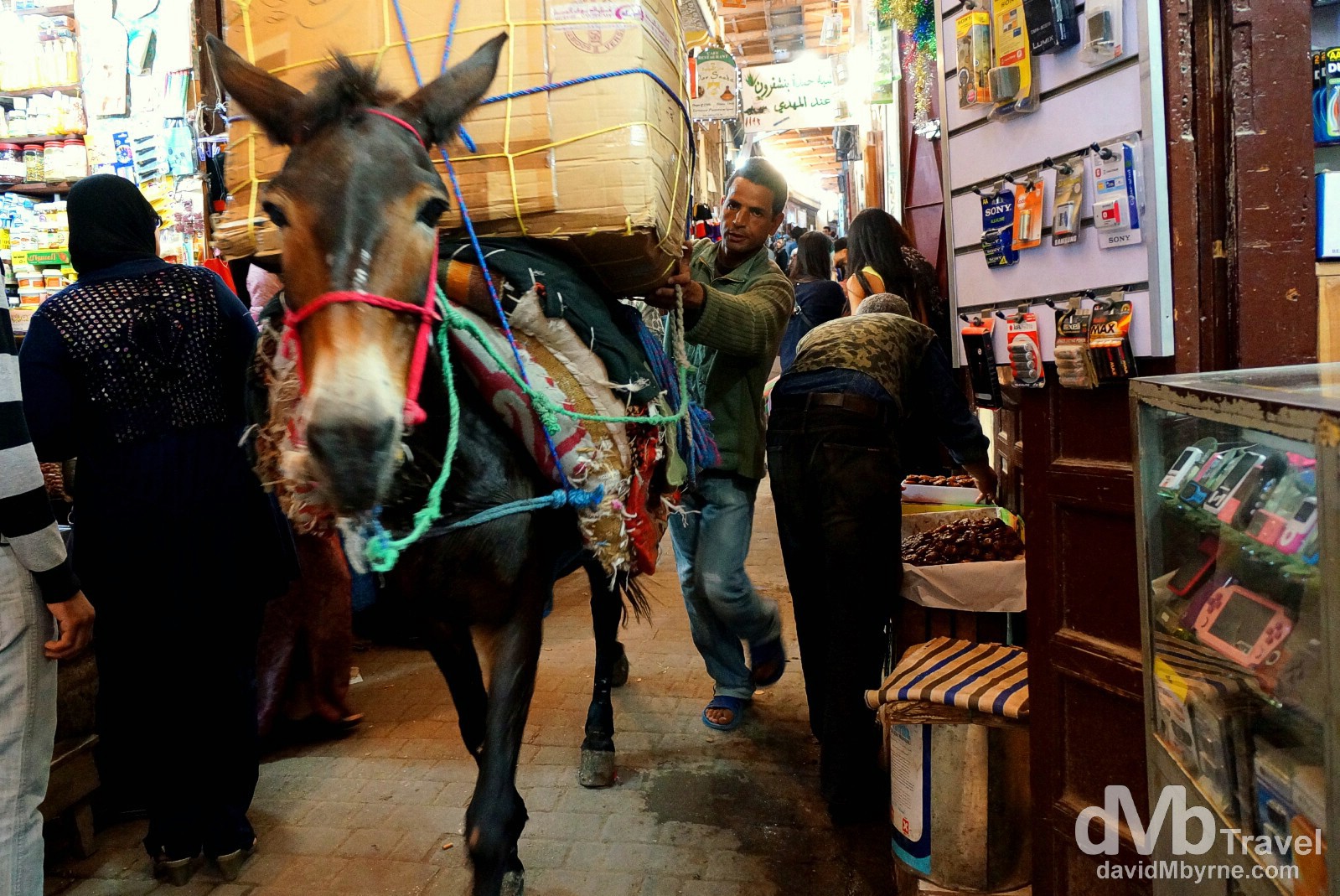 Lose oneself in the crowd – to be pulled along by it – not knowing where to and for how long… to see beauty where it is least likely to appear.

Counterfeit @beatsbydre in #Fes #Morocco on the day of the #Applebeats purchase #travel #dmbtravel #ttot pic.twitter.com/4wfqAt9oX3

Photographing Fes
I didn’t really have any specific photographic goals for my time in Fes. It’d be daft to wander this city, and especially the lanes of the medina, with any kind of a photography to-do list. It’d be just too exhausting. Spontaneity is a must. I also left the camera in my hostel for large portions of my medina rambles, enjoying them more as a result. And even when I did have the camera with me I used it sparingly. It took restraint but that is what is needed here as a photographer, otherwise the whole Fes experience would be just too overwhelming, too exhausting (& wow is me, it’s exhausting enough as it is). 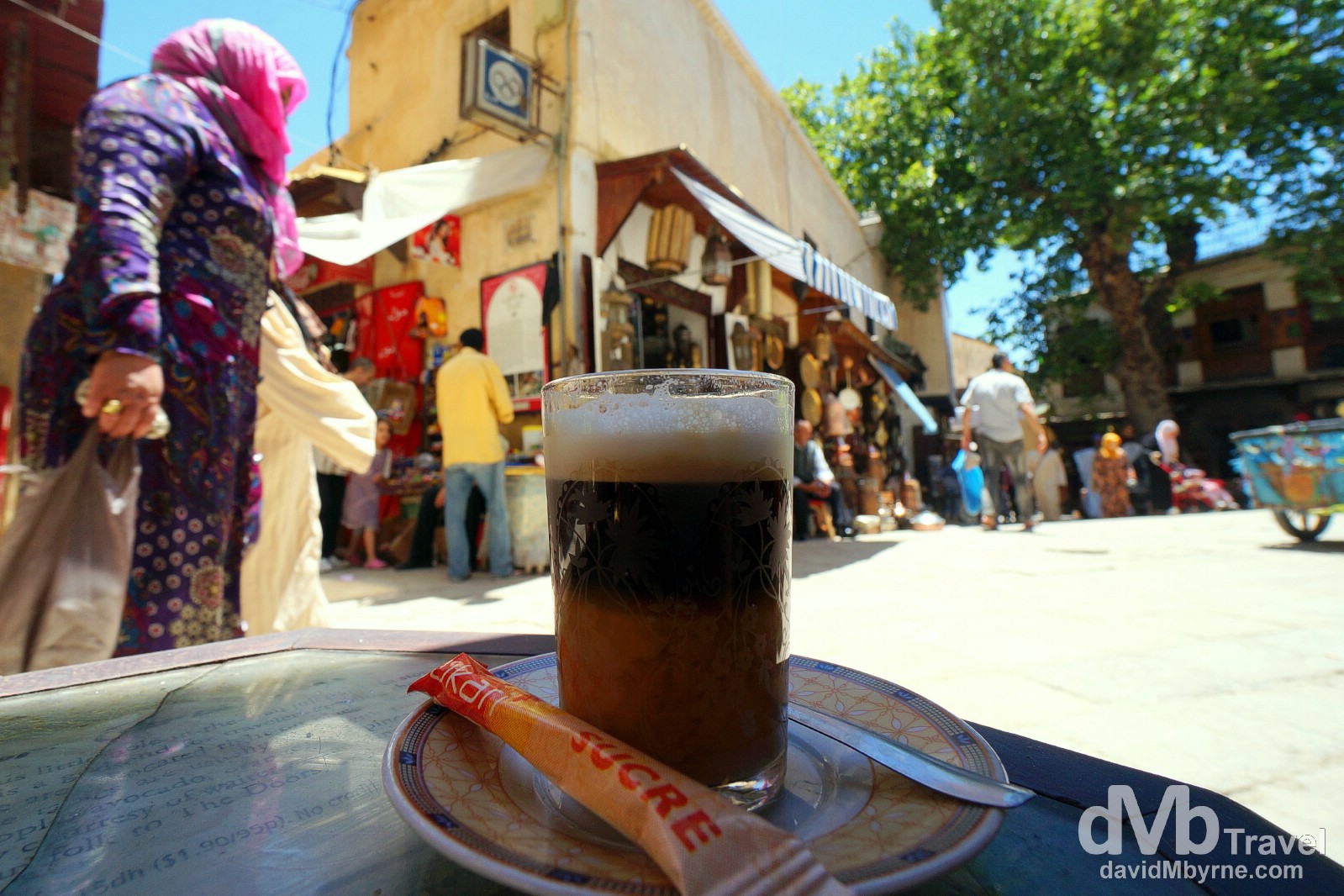 Of course when you do get exhausted you can simply stop by one of the medina cafes and watch the world go by. I did quite a few times, enjoying a café au lait, my beverage of choice in Morocco, each & every time (I haven’t had a beer since Dubai 33 days ago, but who’s counting?). This is me enjoying a break in one of the medina’s most famous cafes, the tiny Cremerie la Place in Place Seffarine, Fes el Bali (Old Fes), Fes, Morocco. May 29th, 2014 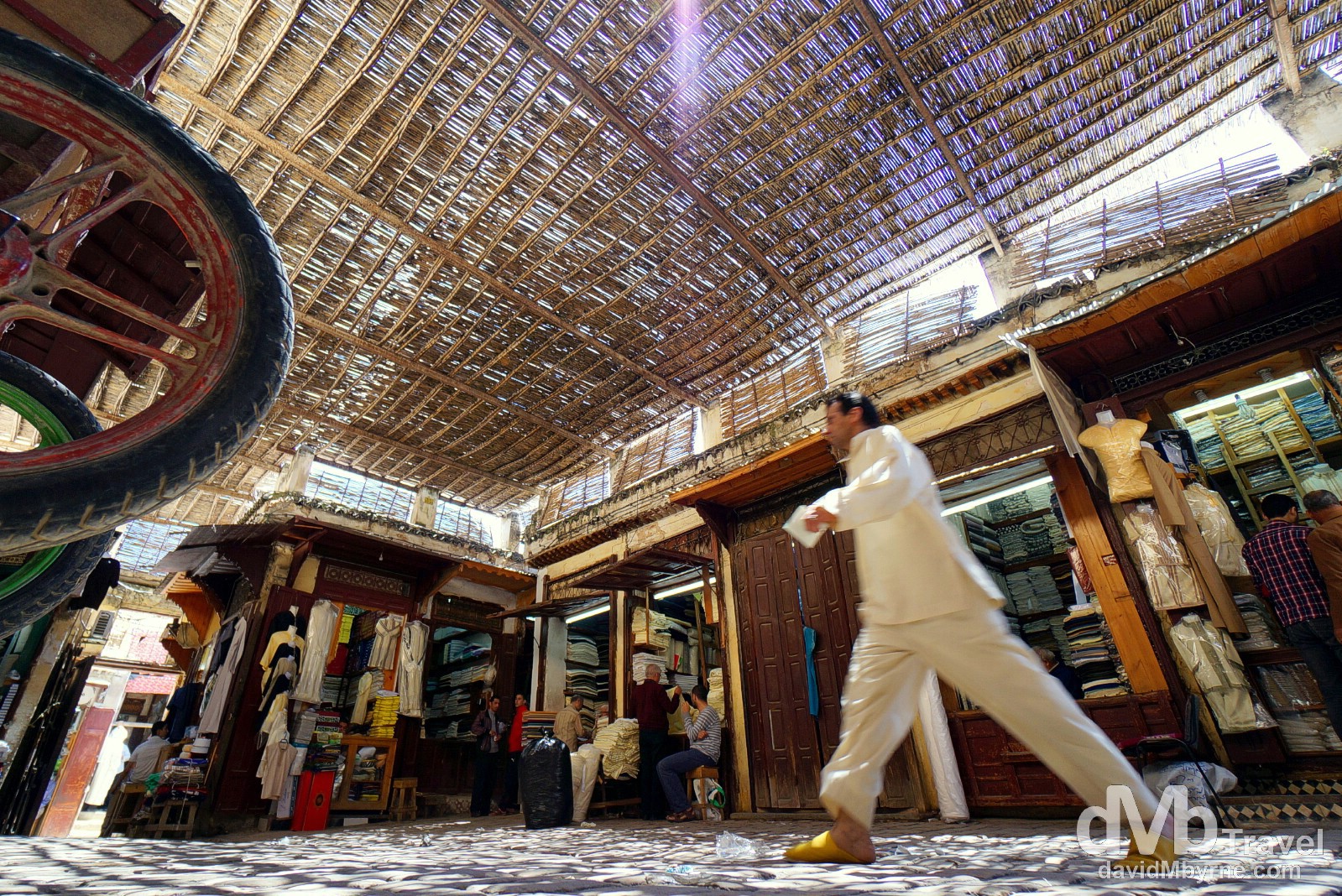 The history of Fes is composed of wars and murders, triumphs of arts and sciences, and a good deal of imagination. 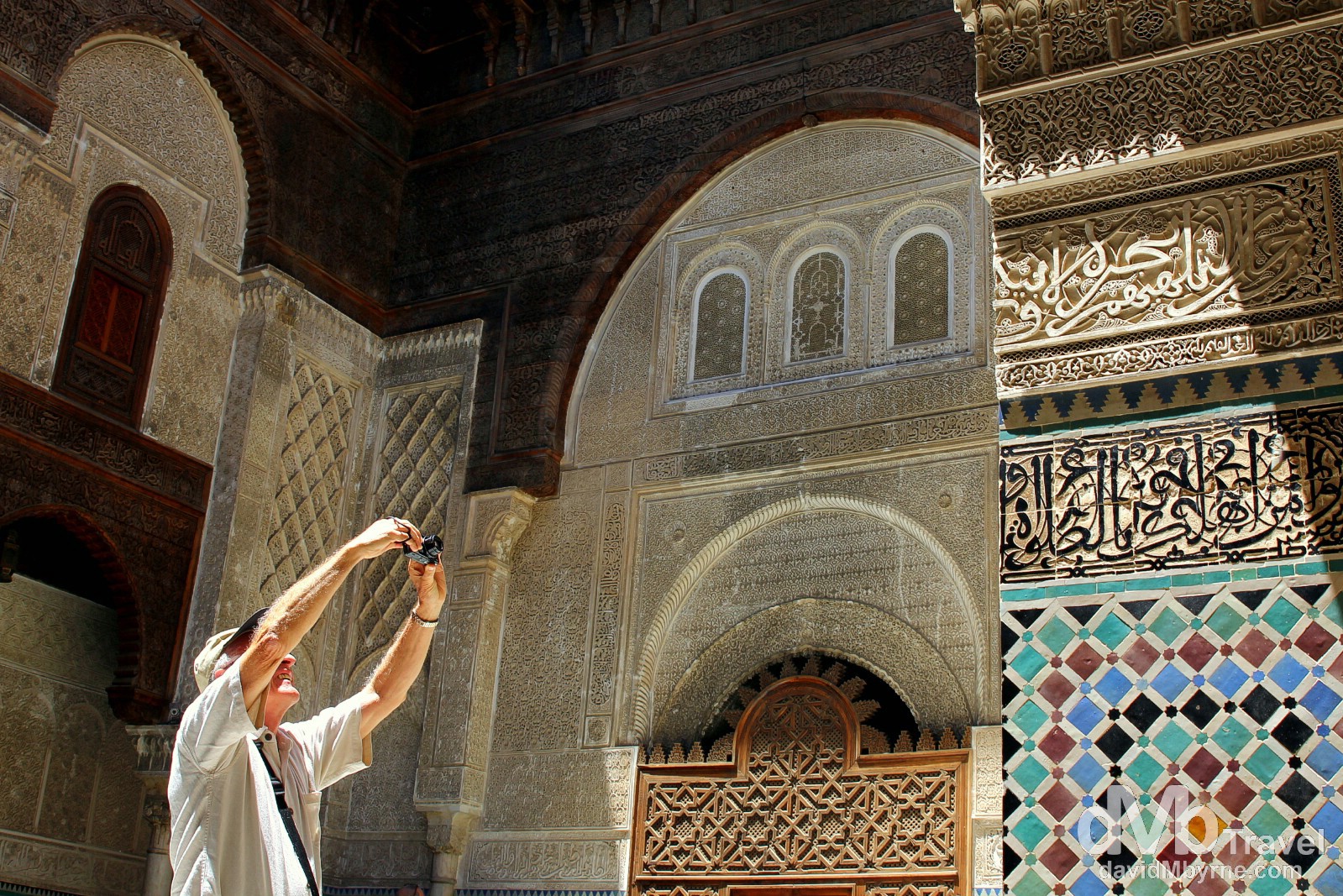 Capturing the detail of the awesome zellij (patterned ceramic tilework, lower level), stucco carving (midlevel) & wood carving (upper level) in the Medersa el Attarin. This is the fourth medersa, a religious school for Islamic studies, I’ve visited in Morocco and the second of the two I visited in Fes. While all share a similar make up – a single, layered & elaborately decorated central courtyard overlooked by upper stories of student cells/dorms – the first medersa I visited in Marrakesh in what seems like eons ago now, the Ali ben Youssef Medersa, is still my favourite mainly because it was the only one of the four to boast a courtyard (reflecting) pool. This medersa, the Medersa el Attarin, was completed in 1325 and is said to be the second most impressive medersa in the city but I preferred it more than the Medersa Bou Inania, the city’s and indeed the country’s so-called top-drawer medersa. Medersa el Attrin, Fes el Bali (Old Fes), Fes, Morocco. May 29th, 2014 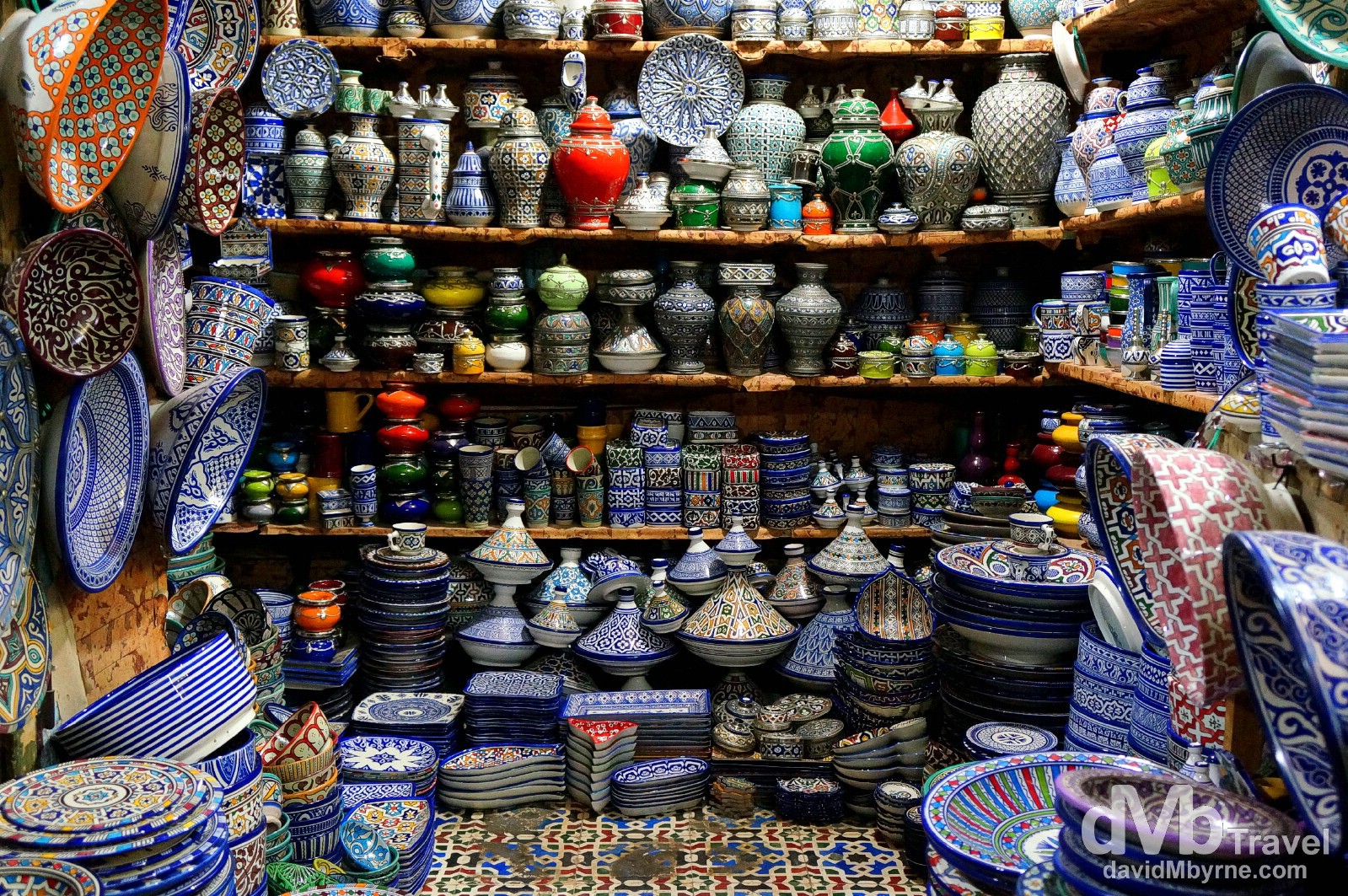 Tanneries Chouwara
I’d read about this place and suspected it was going to be my Fes highlight. I was right. 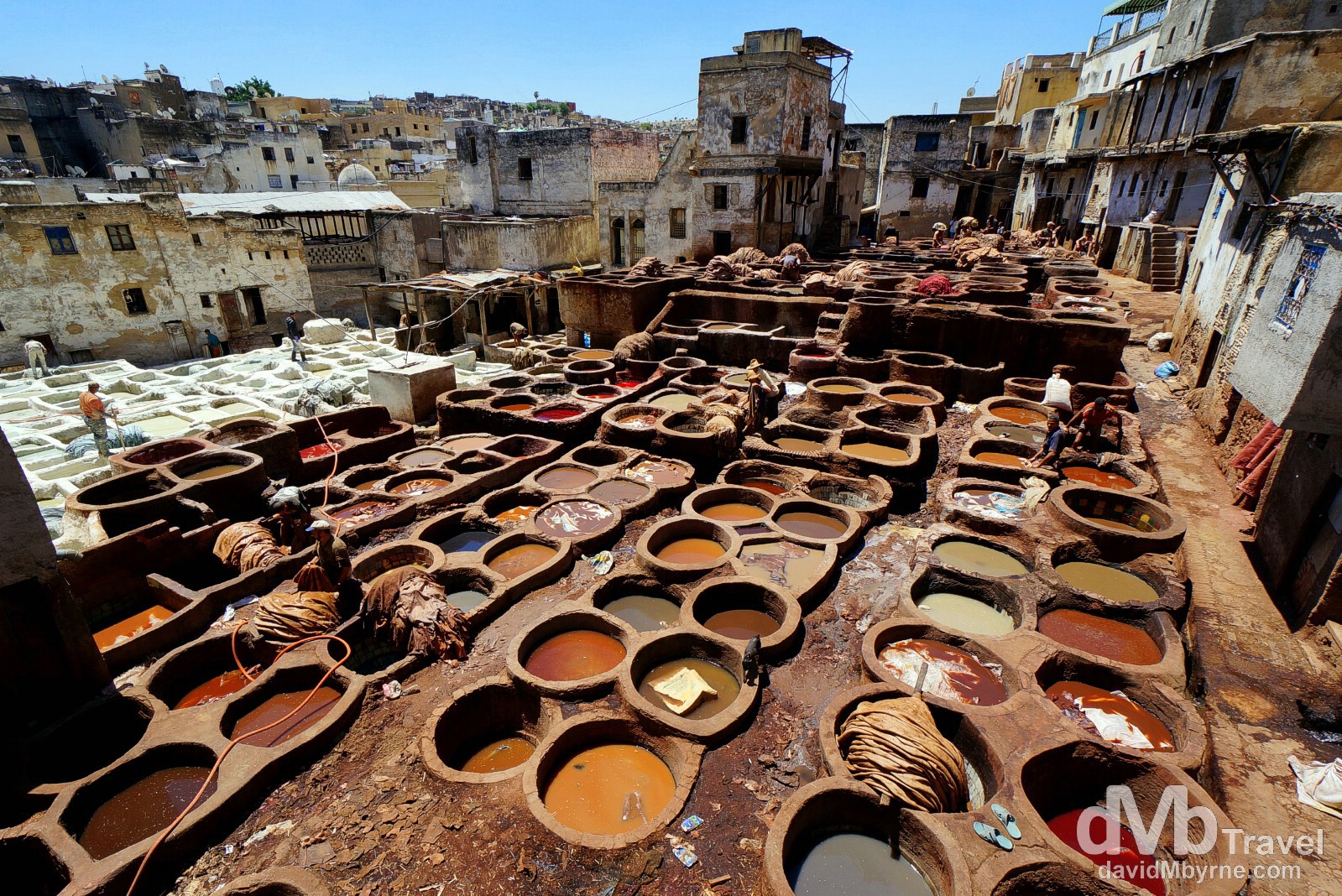 An overview of the extraordinary Tanneries Chouwara. A tannery is a place where skins & hides are treated and few places in the world, if any, still perform the leather making ritual in the ancient, old-fashioned manner as witnessed here at the Tanneries Chouwara. Little has changed here since the 16th century when Fes replaced Cordoba in Spain as the pre-eminent city of leather production & for centuries the leather produced in Fes has been highly prized as among the finest in the world, which I find an extraordinary fact considering the antiquated production environment witnessed here. Tanneries Chouwara, Fes el Bali, Fes, Morocco. May 29th, 2014

Tanneries provide perhaps the greatest illustration of how resolutely some parts of Morocco have clung to practices developed in medieval times. 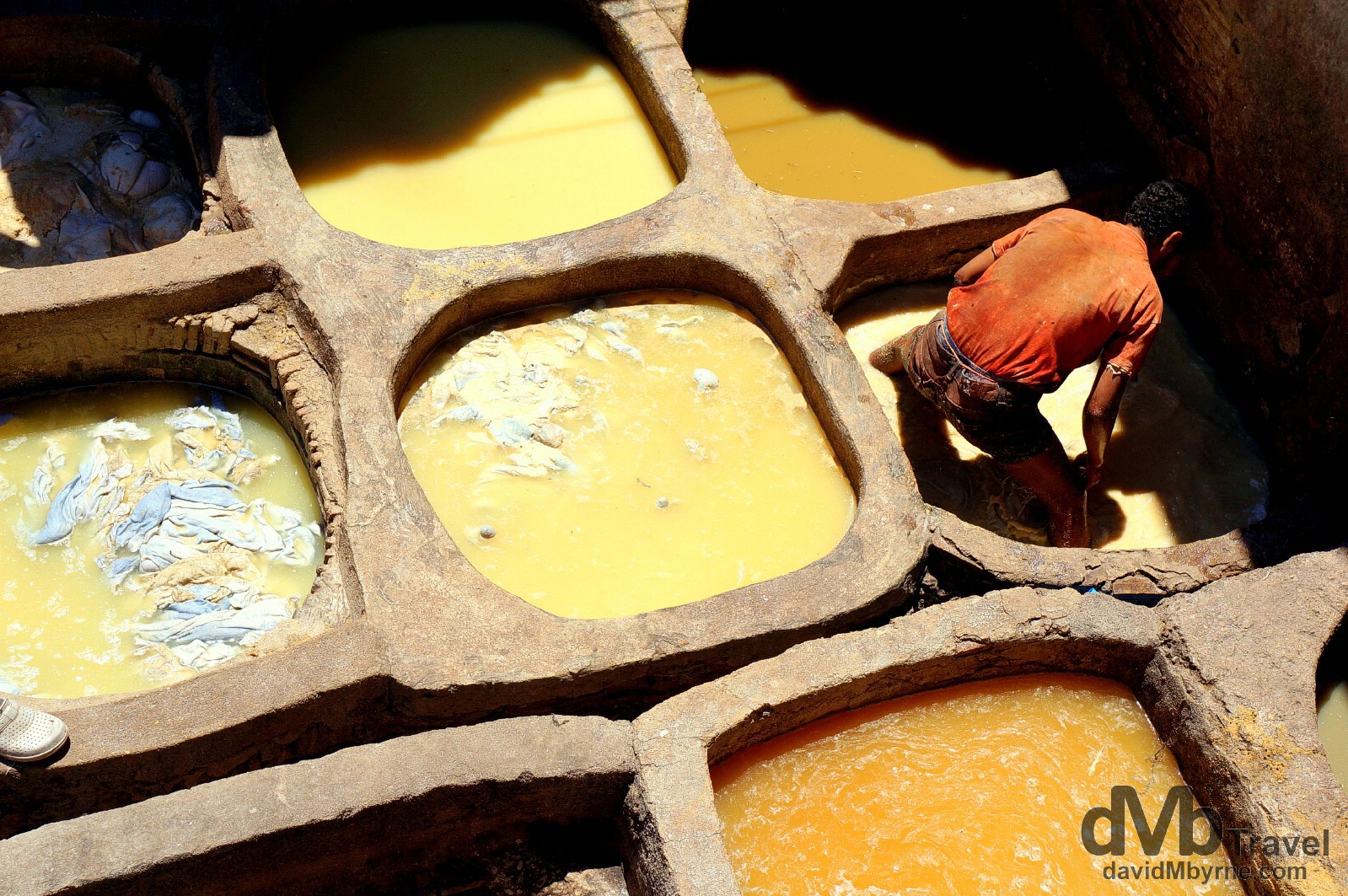 A worker in one of the dyeing vats of the Tanneries Chouwara. Workers are typically born into the job but health & safety measures are as old-fashioned as the tanning procedures themselves, meaning health issues among the workers, knee-deep in chemicals & shit (literally… read on) all day, are common. According to Lonely Planet, it’s not possible to get among the honeycombed vats, vats that are still constructed to traditional designs. Very true and the private cafe & restaurant terraces surrounding the tannery were full of camera-toting tourists. However, I was befriended by a local who had me precariously hotfooting it across the top of one pungent smelling vat to another, in among the presses, & poking around the workshops surrounding the vats, and all for a fee/tip of 40 dirhams (€3.60). Most of his extensive running commentary, a mixture of French & Arabic, was lost on me not that I really needed to fully comprehend what he was saying to appreciate the scene surrounding me – the goings-on were obvious. That said, I understood enough to learn that the main treating agents are the unlikely you’d-never-guess-it threesome of pigeon dung (collected & delivered to the tanneries daily by local kids), cow urine & ash, while the most common dyes used in treating are indigo, saffron & poppy. Tanneries Chouwara, Fes el Bali (Old Fes), Fes, Morocco. May 29th, 2014

The End is (Almost) Nigh
My time in Fes is up, and my time in Morocco is almost nigh too. I’ve only few stops left as I continue north, slowly running out of Moroccan terra firma as I go. Tomorrow I’ll be in the hill town of Chefchaouen, not too far from my last stop in Morocco, Tangier, from where I’ll get the ferry to Gibraltar (& back home to Europe). I’ve already decided my route from there through Spain to Barcelona, my last stop on this particular leg of my 2014 travels. But I’m not quite done with Morocco yet. Almost, but not quite.