I came to Honduras hoping it to be different. It was different alright. Ten days I spent in the country, good for nine sleeps, probably more time than I should have afforded to Central American country number 4. Looking back I spent some or most of seven of the ten days I afforded Honduras moving about, either via bus or boat. Some days I wouldn’t go very far – 50 kilometres, give or take – while other days I had to really swallow up ground – up to 350 kilometres, a distance light would surely shudder at if having to cover it using Honduran buses. Even 350 kilometres doesn’t sound much to me but considering 50 kilometres took forever then you can probably imagine just how testy the testier travel days were.

It’s a big country you see, the second largest country in the region after Nicaragua, my next stop; its asphalt-challenged roads are patchy at best meaning vehicles drive on whatever side of the road offers the smoothest passage; & people (the driver, passengers on the bus and those on the side of the road) just seem to like stopping buses every 4-5 wheel revolutions for no obvious reason. All of that combines to mean that things that transport in Honduras don’t transport with much urgency.

I limited my travels to the west & north of the country, not branching too far from the so-called Gringo ‘west-to-north-to-south’ trail (& good thing, too). With all the moving about 10 days was, as it turned out, sufficient time to take in Honduras’ most famous site, the Mayan ruins at Copan; to spend a few days on a Caribbean Island; to spend a few days by a lake, Lago de Yojoa, that I never actually got to see; and to spend one night, last night, in the you-know-you-should-only-be-passing-through capital & the third largest city in Central America, Tegucigalpa (& I’m fessing up here to doing a cut & paste job wherever that word appears as there’s no way I’ll be remembering the correct spelling).

The lake is an especially popular location with birdwatchers as over 400 bird species call it home. I used the region as a base for a 2-night break in the journey from the Caribbean coast to the southern border with Nicaragua. Lago De Yojoa is the prominent feature in the region but for the time I spent here I never actually got to lay my eyes on the lake itself, not until I saw it from the bus window en route to the capital yesterday morning. But for the two days I was in the vicinity of the lake I did manage to take a stroll through a coffee plantation/garden…

… and I managed to visit a waterfall, all from my base a few kilometres outside the village of Pena Blanca.

) in western Honduras, a nice 43 metre falls on the Rio Lindo surrounded by some lush, well-preserved forest. June 12th 2013.

Video || Pulhapanzak Falls
OK, so the above picture isn’t great (the mist coming off the falls made photography difficult). But it’s all I got. Except for this video of the same scene, which does a better job at showing the falls. 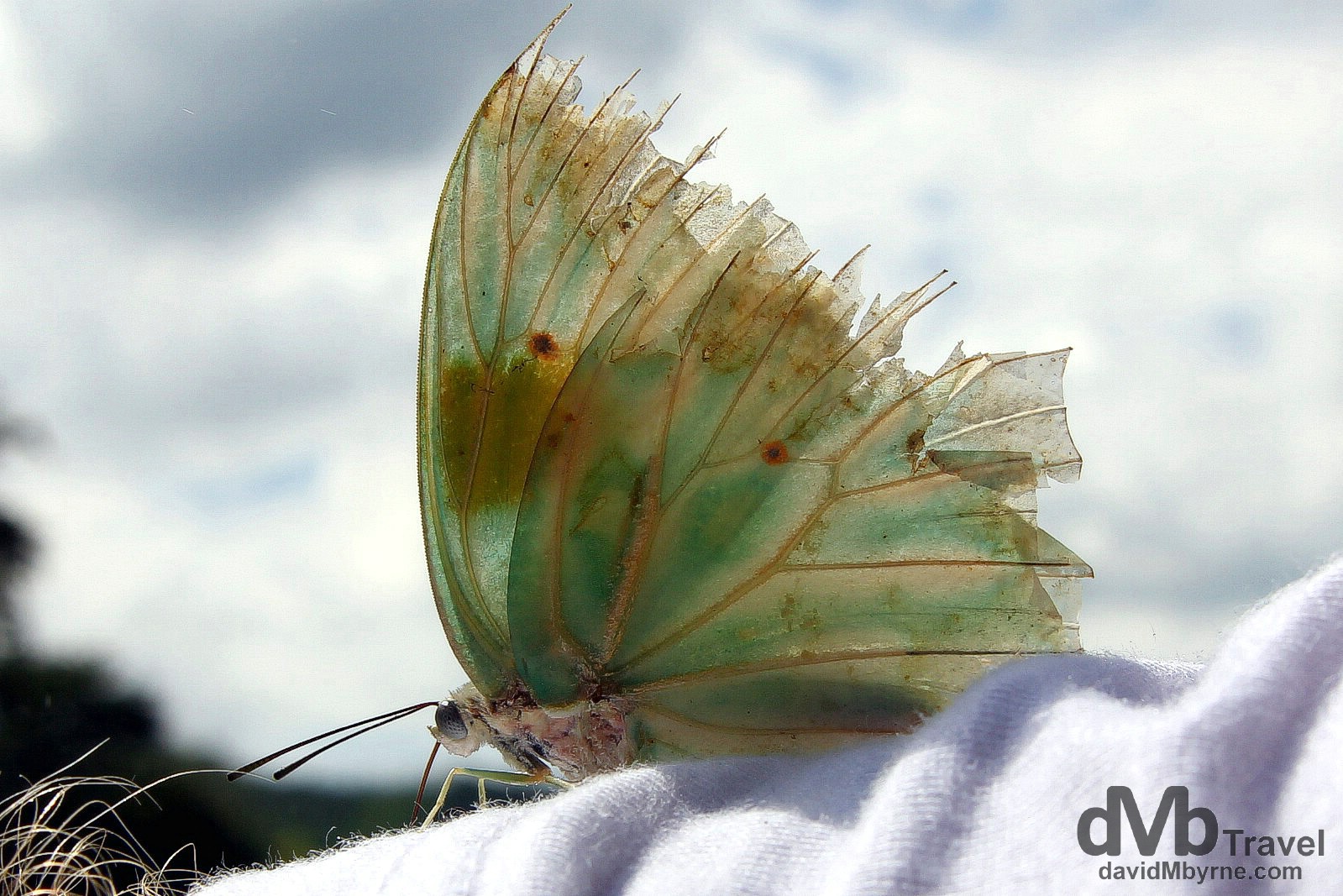 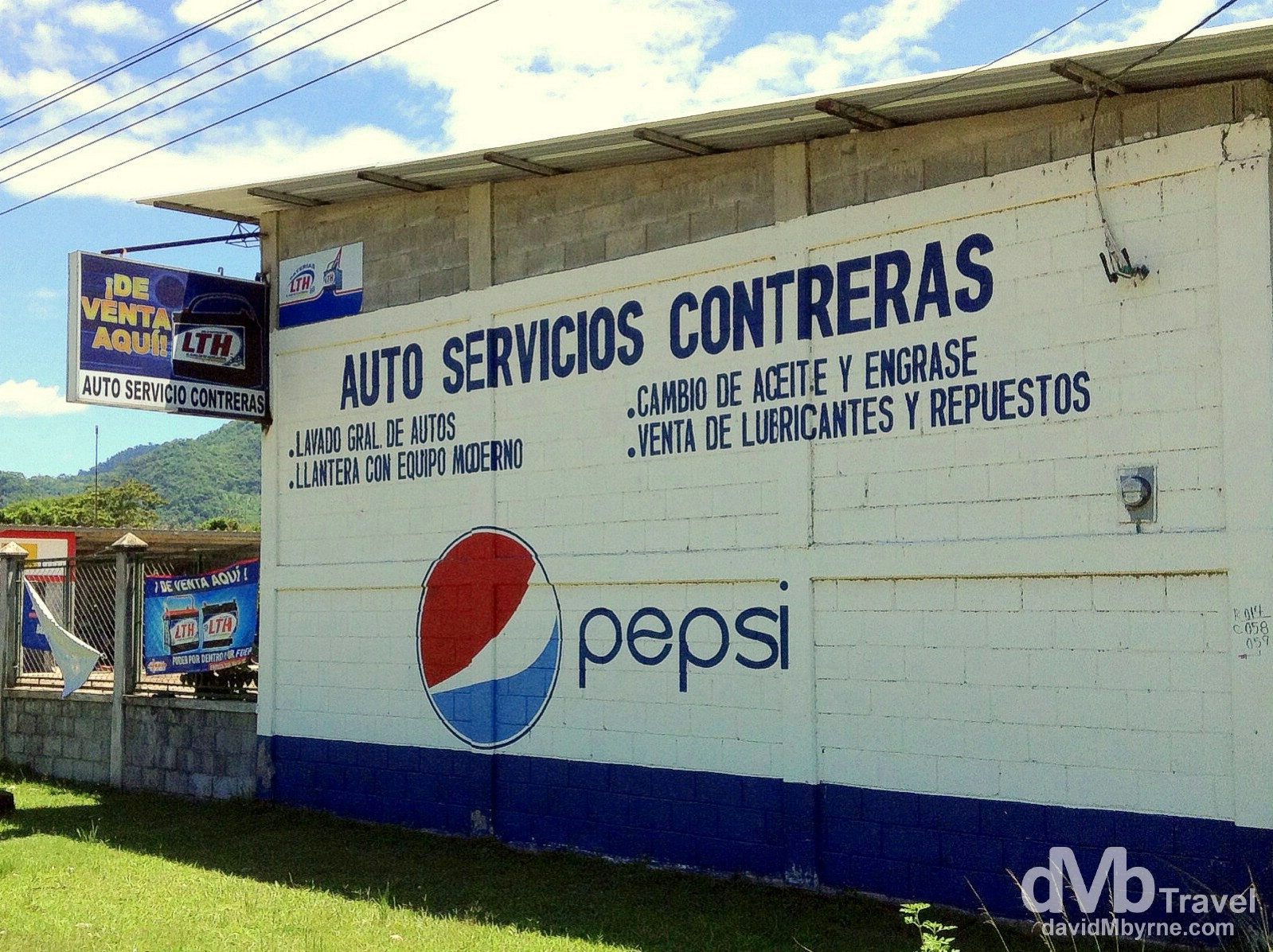 One aspect of Central America that I’ve noticed is the abundance of Pespi advertising. It’s everywhere, like here on the side of a garage on the outskirts of the village of Pena Blanca. In this part of the world at least Coco-Cola plays a distant second fiddle to the big P. Western Honduras. June 12th 2013. (iPod) 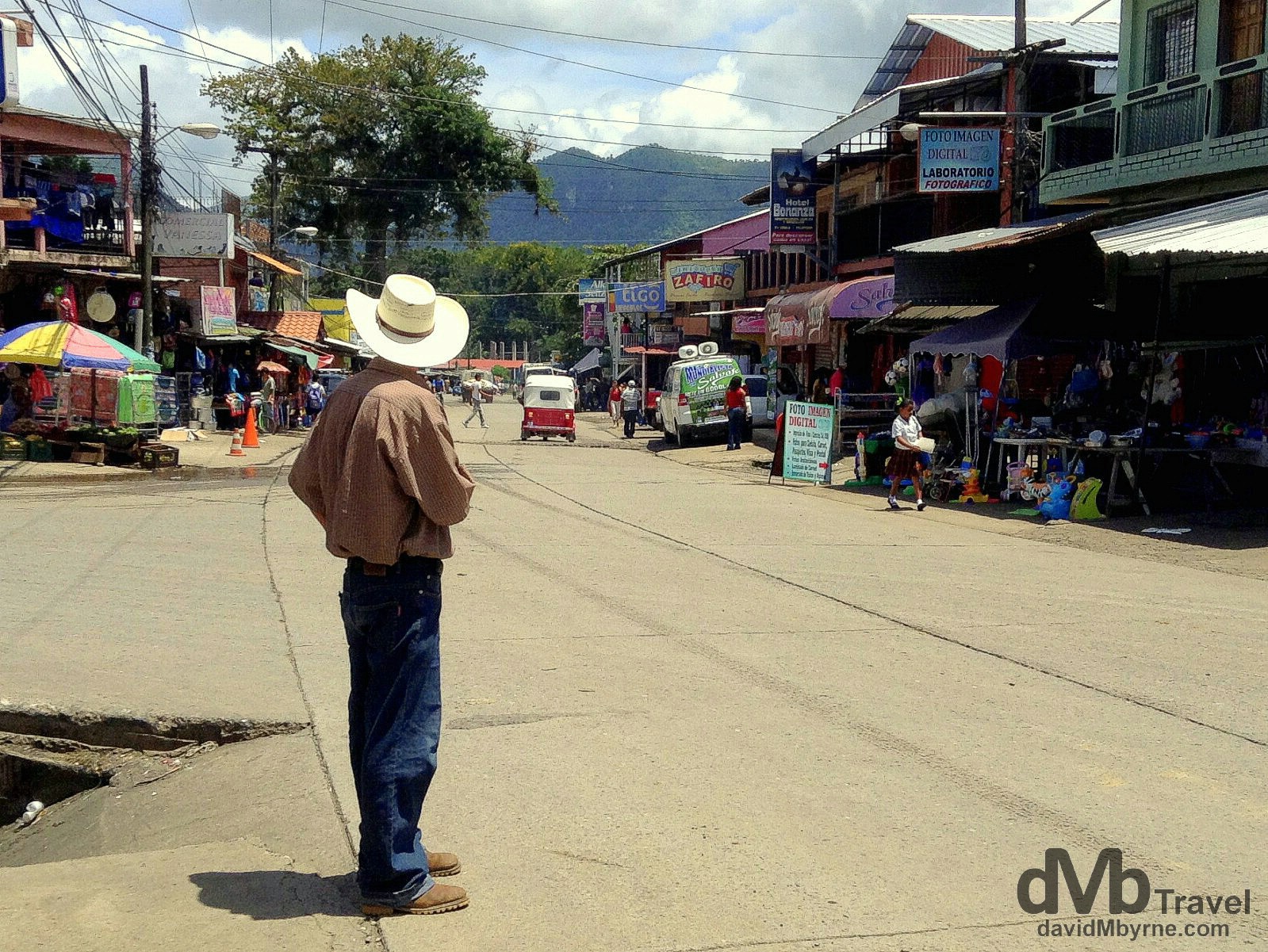 ), western Honduras. However, the waiting only really starts once you board a Honduran bus. June 13th 2013. (iPod)

Last stop in Honduras, the capital of Tegucigalpa (

). After Guatemala City & San Salvador, El Salvador, it is the region’s third largest city, situated some 160 kilometres south of Lago de Yojoa and about the same distance again from the border with Nicaragua, my ultimate destination. I’ve nothing to say about my time (one night) in the city (I ventured from the bus station to my hotel, from the hotel to the supermarket & from the hotel to the bus station again, all within a few hundred yards of each other) other than to say the more I read about these Central American capital cities the more I feel I should be avoiding them altogether.

– Lonely Planet’s Central America on a Shoestring on Tegucigalpa

The formula here is the same as it was in Guatemala City & San Salvador, the regions two largest cities, but the more I read of Lonely Planet’s warnings the more paranoid I seem to be getting (and that’s not a good feeling).

Video || Tegucigalpa Shuffle
A 30-second video captured earlier today as I walked the kilometre or so along 6a Avenue in the Comayaguela district of Tegucigalpa from my hotel to the bus station to get the bus to Nicaragua. This video pretty much has it all – noise, traffic, fumes, street stalls, the requisite beggar, & crumbling, dilapidated infrastructure.

Nicaragua Bound
I’m en route to Nicaragua. Even though I’ve still 3 Central American countries to go and if I were a beating man (I’m not) I’d be pretty sure Honduras will be very close to the top of my least favourite Central American country list when all is said and done. Harsh maybe, but I spent what seemed like an inordinate amount of time getting to places that really didn’t resonate with me (except for Copan), all the while not feeling too well (yes, I’ve been a bit off of late). And too make matters worse I don’t even have half-decent pictures to show for it. So Nicaragua, you don’t exactly have a tough act to follow.