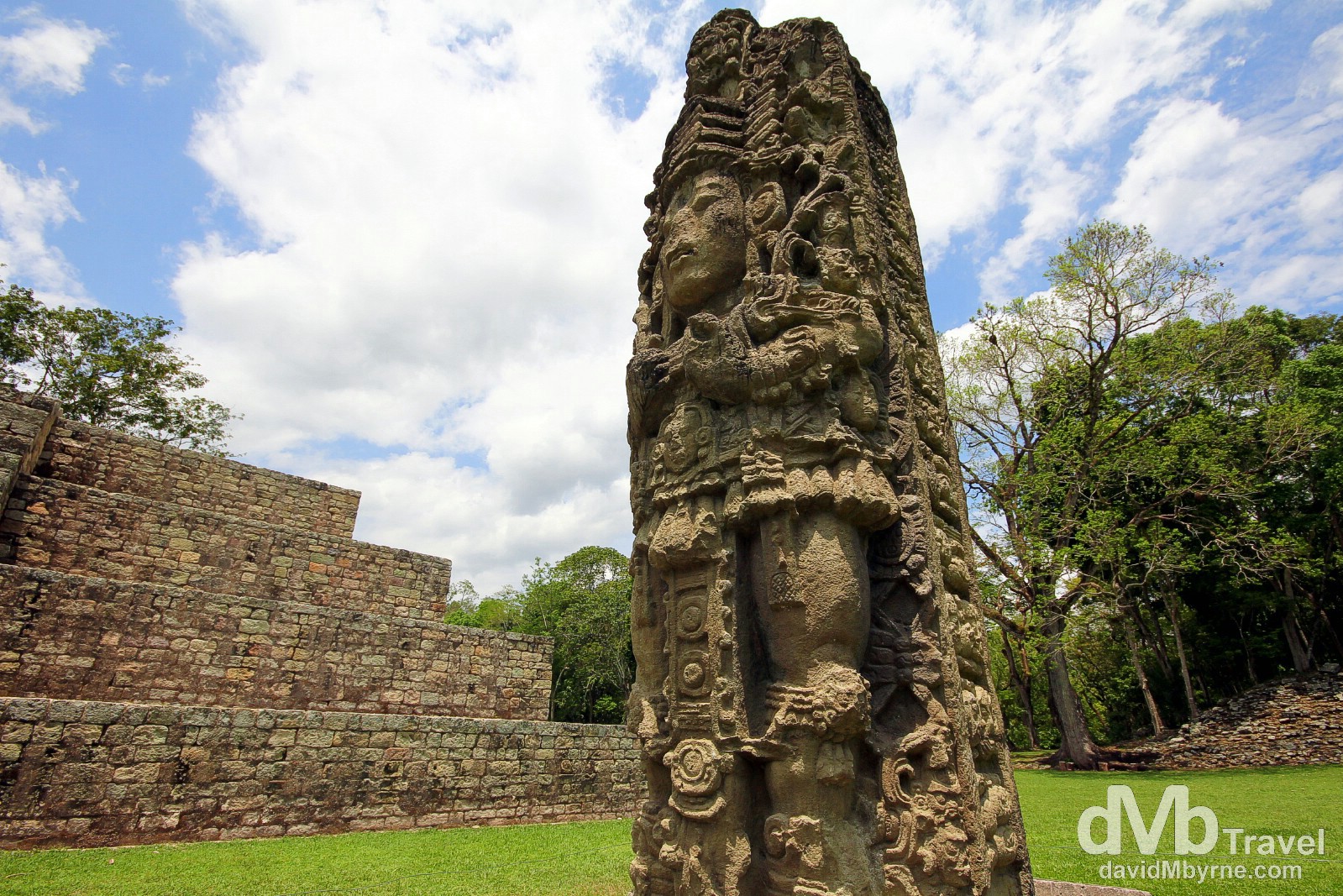 Honduras’ top destination and it’s only major Mayan site is the Copán Architectural Site. Deep in western Honduras & close to the Guatemalan border, I took the roundabout, out-of-the-way route to get here having come to Copan via El Salvador – seemingly it’s easier visited direct from Guatemala, something I’d now well believe. But regardless of how I got here I’m glad I stopped by. 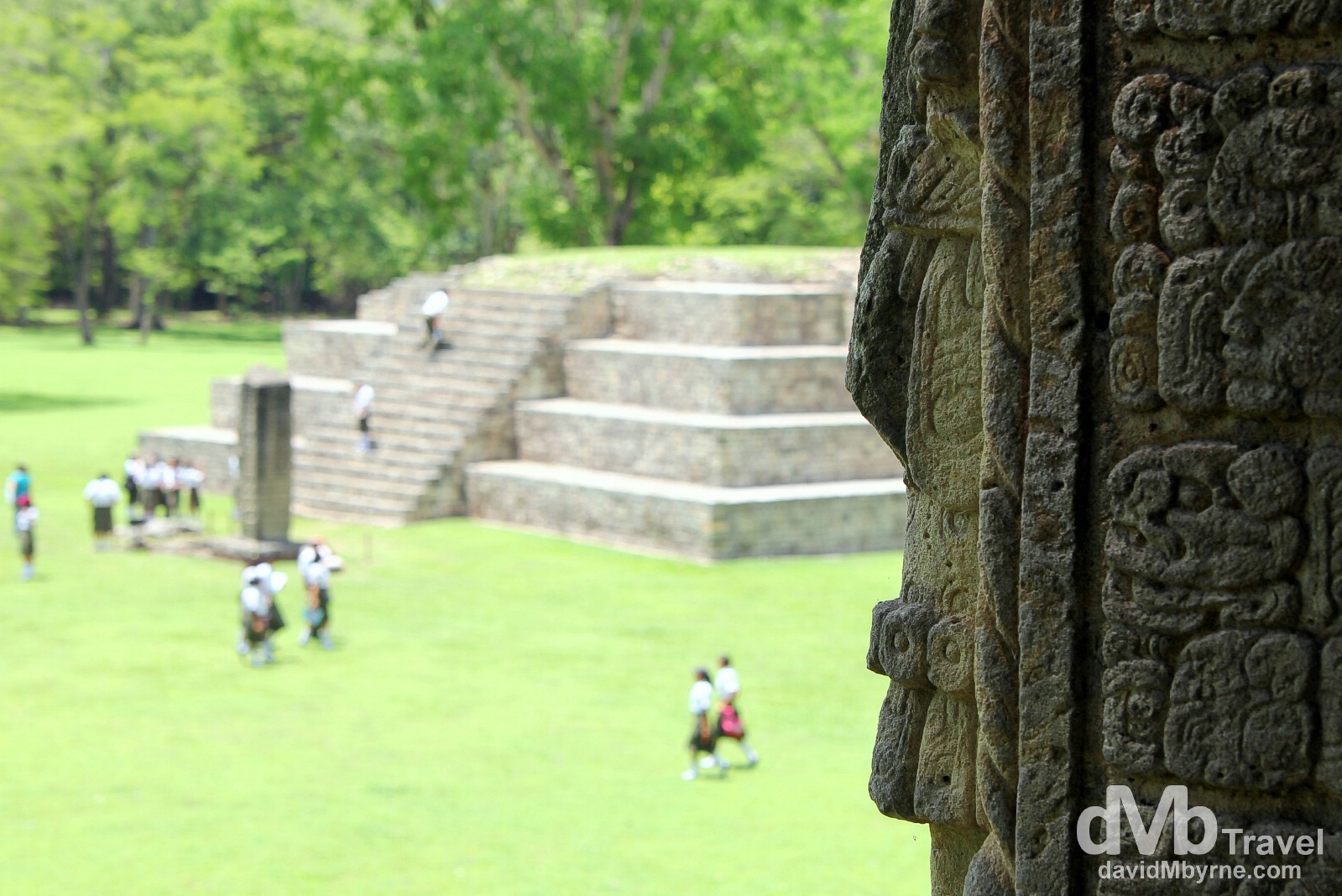 Copán
Discovered in 1570 by Diego García de Palacio, the ruins of Copán, one of the most important sites of the Mayan civilization, were not excavated until the 19th century. A great Mayan city-state that was home to as many as 25,000 people, it was an important centre of trade at the southeastern edge of the Maya world (all other major Mayan sites are north of here in Guatemala, Belize & southern Mexico).

An iPod panorama of the epicentre of the Copán Architectural Site, the Great Plaza. The Plaza, the largest public space in Copán, was once paved with white lime but now is covered by a well-manicured lawn. It was used to host impressive public events (including human sacrifices of captured rival warriors) with up to 6,000 people in attendance. Seven stelae (see following pictures), eleven altars & the so-called Hieroglyphic Stairway, the most extensive pre-Columbian hieroglyphic writings in the Americas and one of the most remarkable Maya monuments in existence (covered to the right of the frame), form one of the most beautiful sculpture gardens in the ancient Maya world. The Great Plaza of the Copán Architectural Site, western Honduras. June 7th 2013 (iPod) *Click on the above image to expand to full screen*

Video || The Great Plaza of the Copán Architectural Site
The following video was captured from the top of the pyramidal structure, right of centre in the above picture, Structure 4.

Stelae 3 in the Great Plaza. Stelae are an ancient upright stone slab bearing markings. The Maya called stelae lakamtun, or large stones (smart people). Copán has many volcanic tuff (a hard volcanic rock from the surrounding hills) stelae, most of which are carved as portraits of different dynastic rulers of Copán performing rituals. They are normally carved on all 4 sides with hieroglyphic texts, the inscription of which normally starts with the date on which the monument was dedicated. The Copán carvings, carved using only stone tools, describe royal genealogy, history, dates and rituals of the sixteen rulers of Copán over a period of almost 400 years (400-800 AD). The carvings are the zenith of Mayan artistic endeavour marking Copán apart from other Mayan sites in this regard. Copán Architectural Site, western Honduras. June 7th 2013. 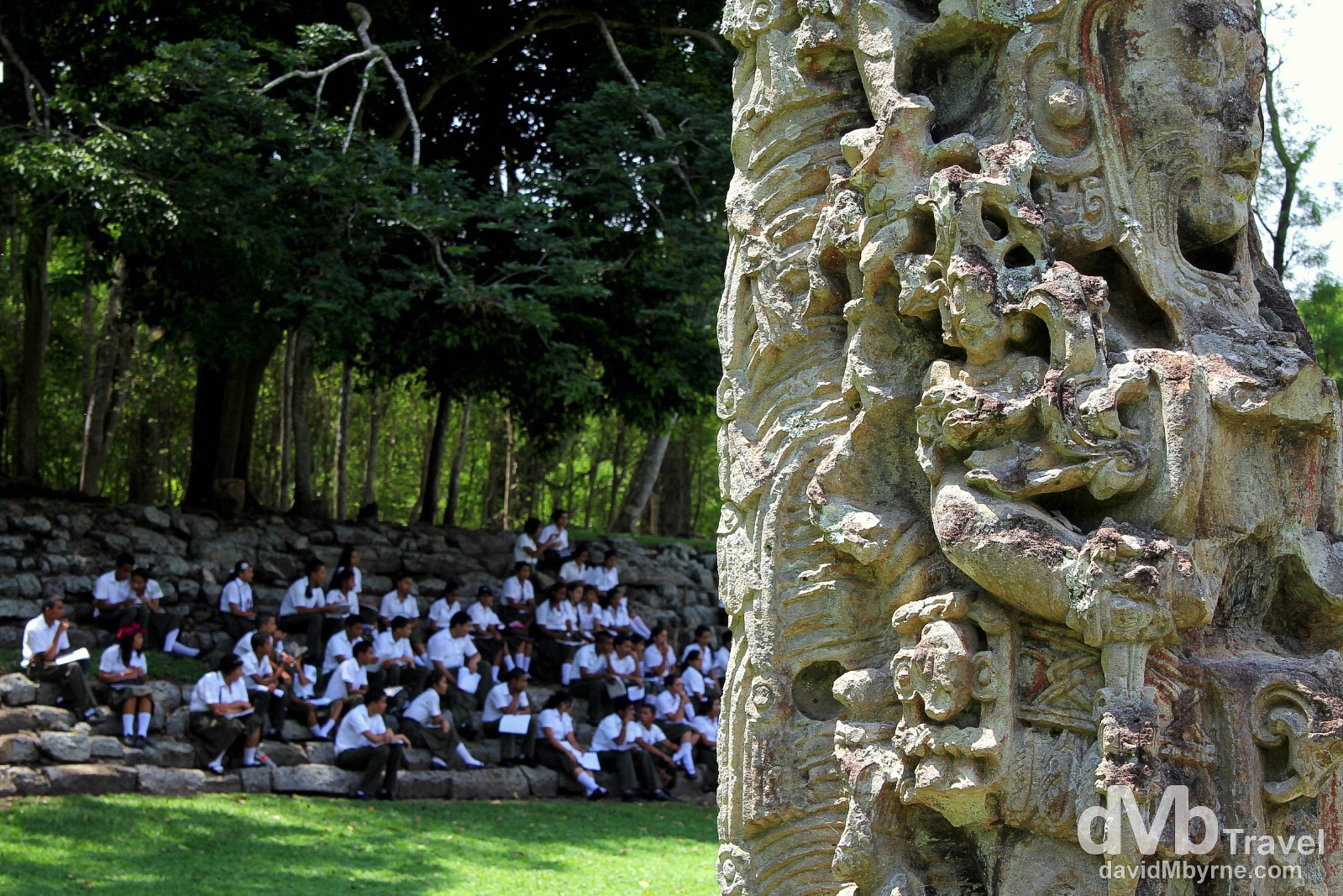 An educational briefing in the Great Plaza of the Copán Architectural Site, western Honduras. June 7th 2013. 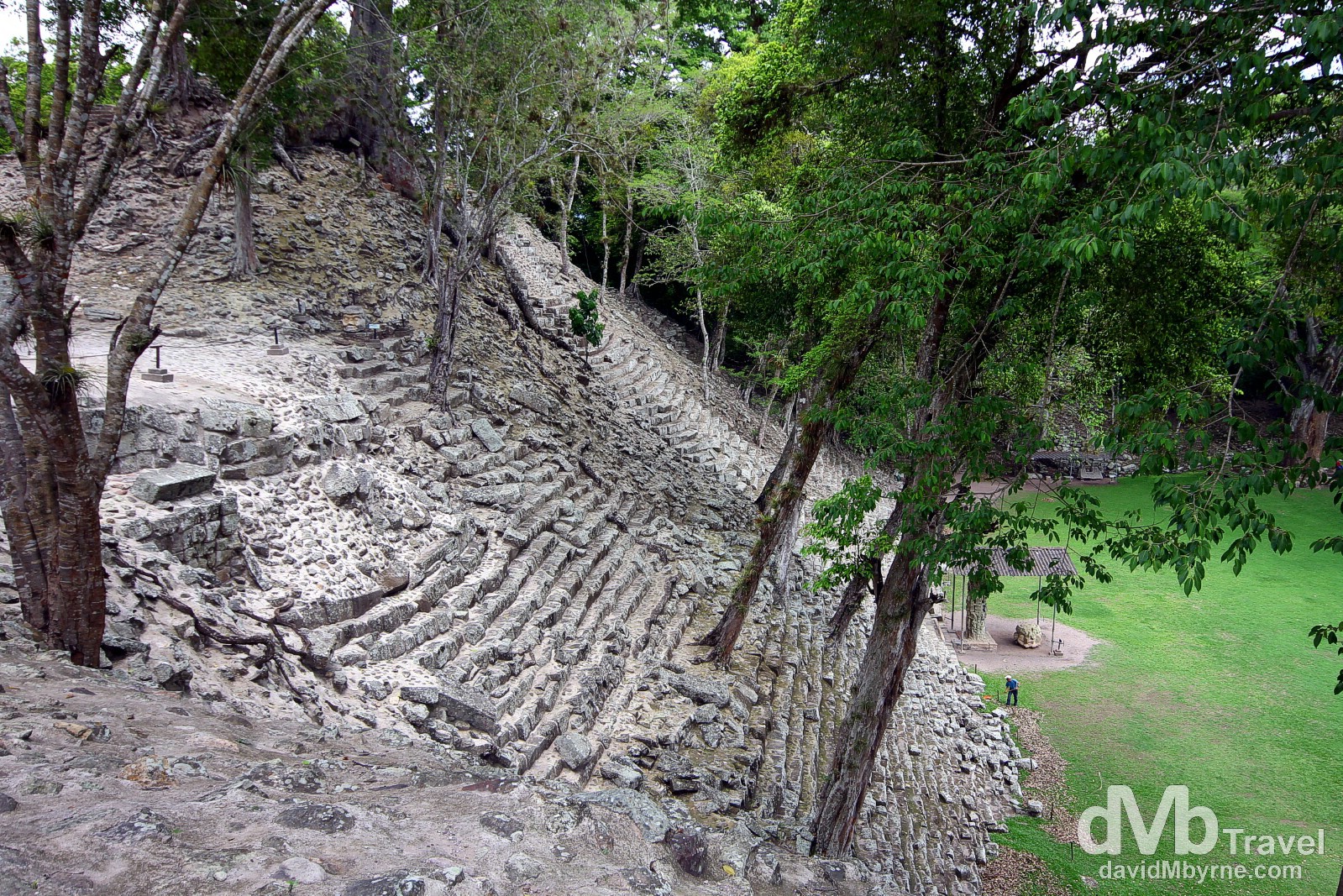 A man rakes leaves at the base of the Temple of The Inscriptions. Sitting in the fertile Copán Valley, the Copán Architectural Site was in its day the prominent artistic and cultural centre of the Maya world. The ancient Mayan of Copán, as elsewhere, used architectural relationships to mirror their cosmos, often building repeatedly on the same spot & using similar patterns and rituals. As a result the site houses many huge piles of stone built up over the centuries, just like here at the massive Temple of The Inscriptions. What is seen today has been excavated and restored over many decades, an ongoing process to fit together the massive stone puzzles left behind. Copán Architectural Site, western Honduras. June 7th 2013. 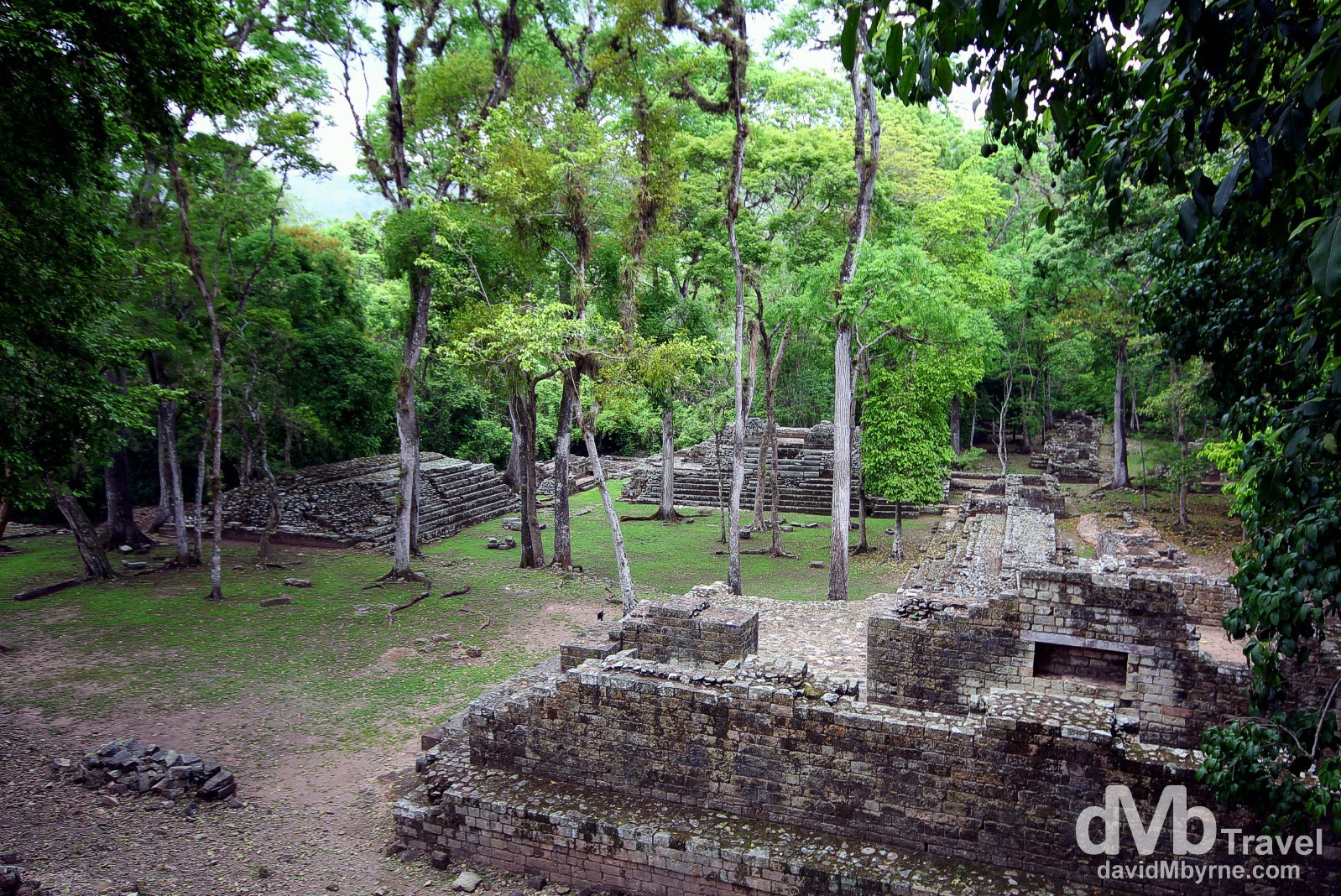 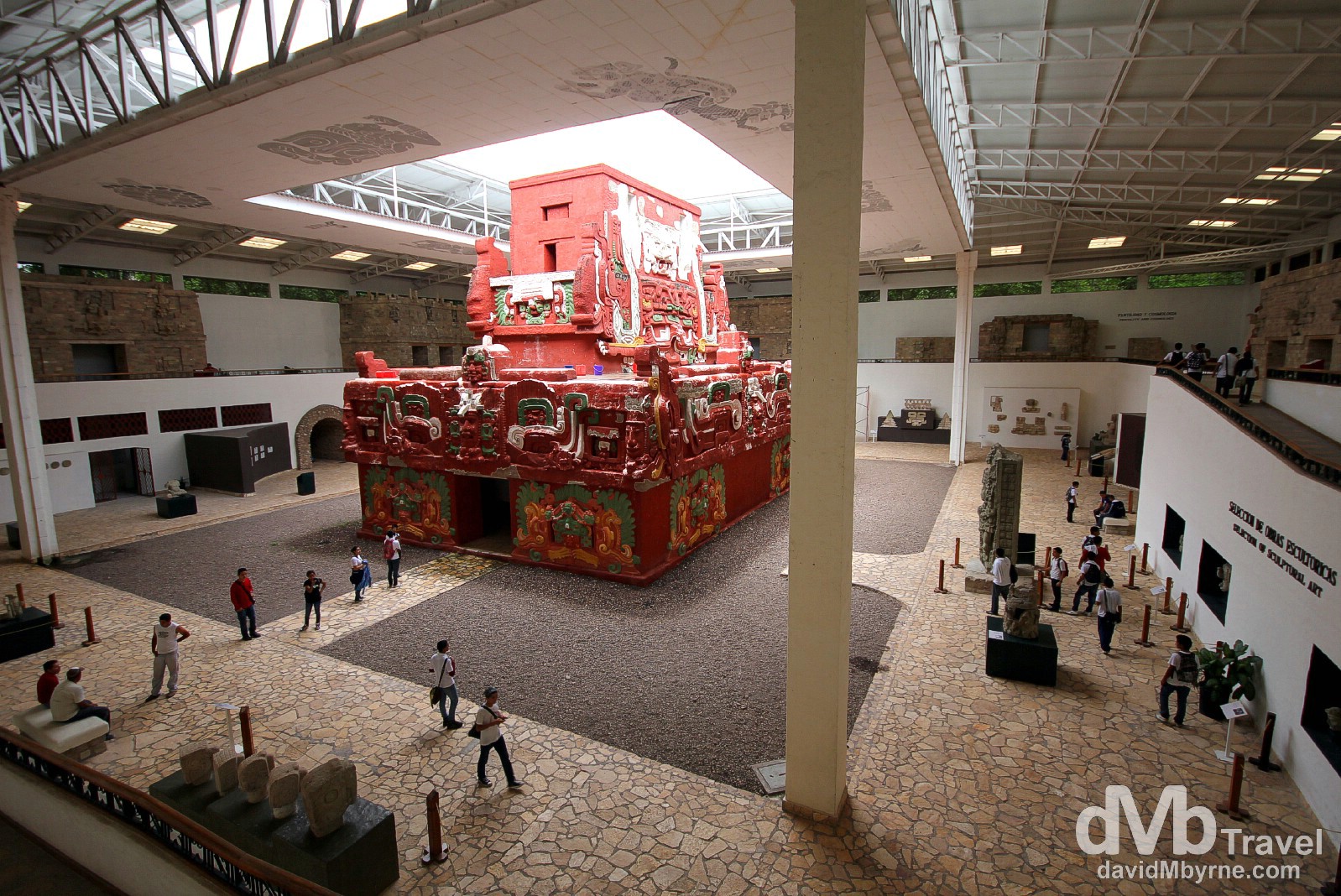 Museum of Sculpture at the Copán Architectural Site. The museum is a large open-air structure built to preserve & display the original Copán site stelae, monuments & stone sculptures – most of the stelae located around the Copán site are you’d-never-know-unless-we-told-you pre-cast replicas. The centrepiece of the museum is a full-scale replica of the stucco-covered temple Rosalila. The original temple, believed dedicated in around 550 AD to honour the first dynastic ruler of Copán, is found buried under the massive pyramidal pile of stone that is Structure 16, another huge pile of Copán volcanic tuff rock & one of the largest structures in Copán. The original temple was so sacred that it was left intact when rebuilding and adding to Structure 16, a structure that now not only surrounds the original temple but also entombs it. Copán Architectural Site, western Honduras. June 7th 2013. 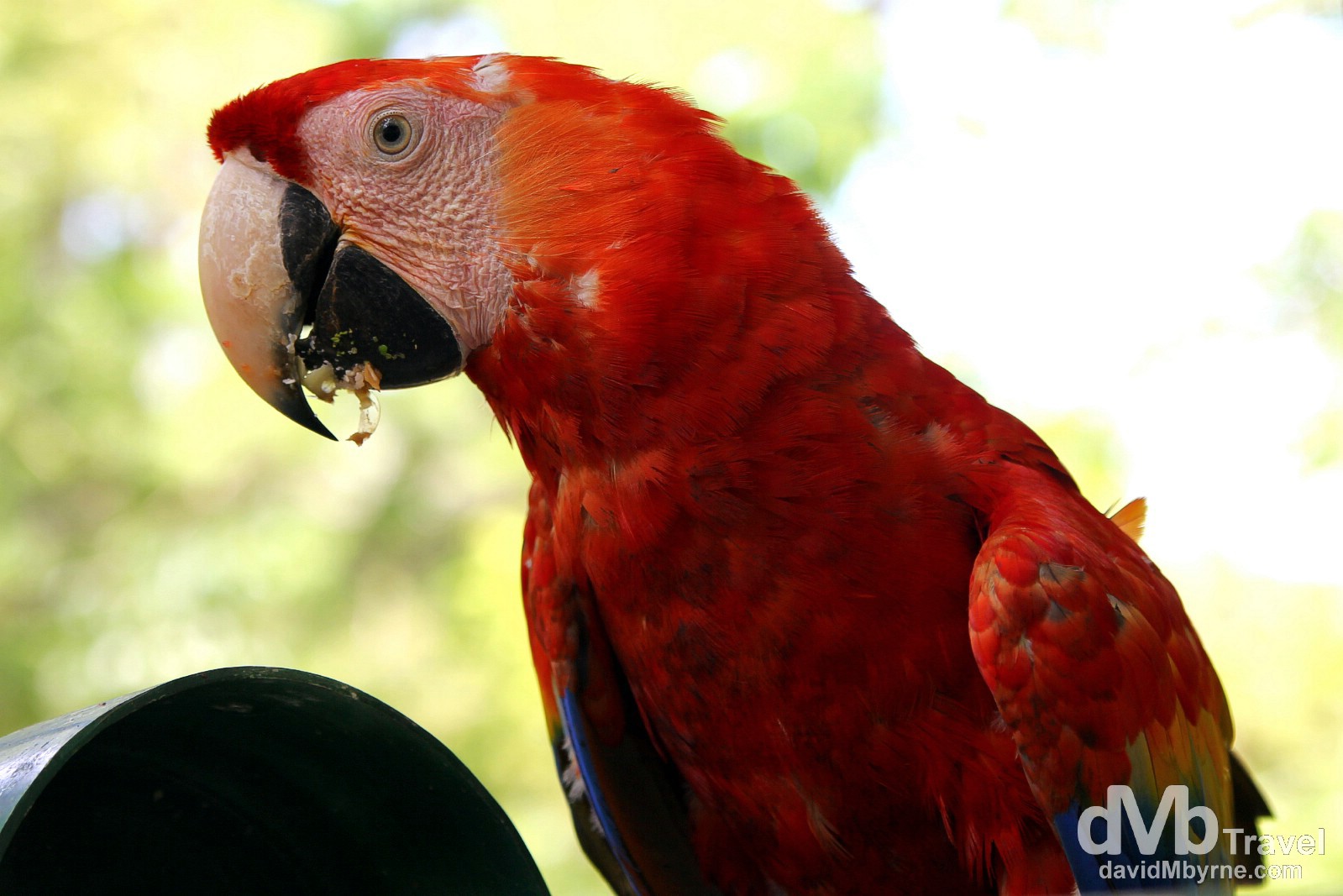 A scarlet Macaw in the grounds of the Copán Architectural Site. The monogamous scarlet macaw is the national bird of Honduras and it was pretty cool to see, and hear, them in the grounds of the Copán ruins where a program has been set up, the aim of which is to reintroduce them into the Copán Valley. The ancient Maya revered the macaw whom they regarded as sacred – its image is found as a glyph (a symbolic figure carved or incised in relief) in the Maya writing system & its feathers were used to decorate the headdresses of the Maya high & mighty. The image of the bird is found everywhere on ancient Mayan monuments but it’s especially ubiquitous in Copán. Copán Architectural Site, western Honduras. June 7th 2013.