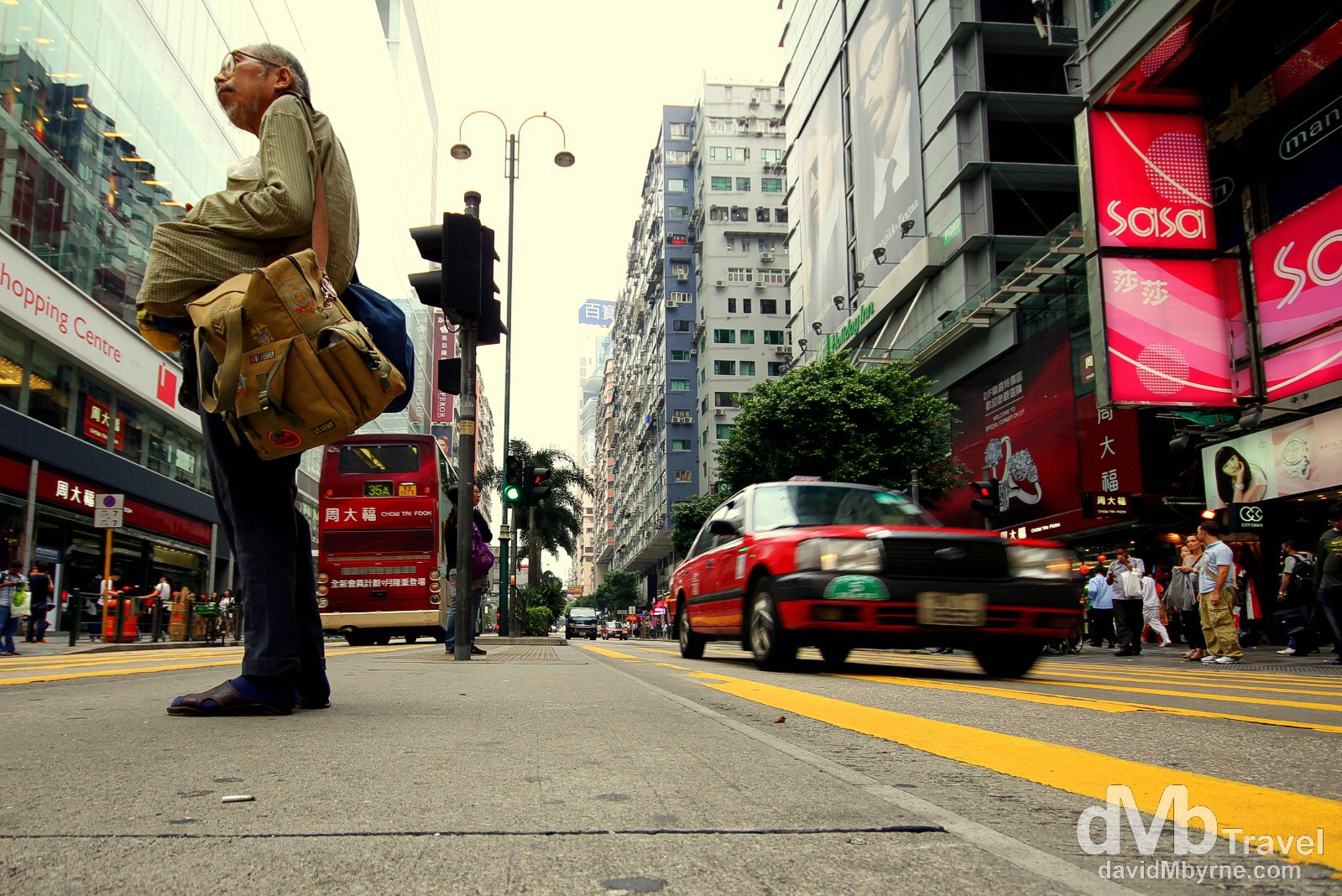 Hong Kong, designated a SAR, or Special Administrative Region of China, is home to one of the world’s greatest & most photogenic cityscapes.

I was looking forward to getting reacquainted with the world-famous HK light show & so a few nights ago – on my first evening on this, my third visit to the city, but first since 2005 – I sat by the water’s edge in Kowloon waiting as darkness descended & watching the lights of Central Hong Kong across the expanse of Victoria Harbour slowly spring into life. I took quite a few shots, mostly at dusk with some (rapidly dying) light left in the sky. However, the shots taken in complete darkness were my favourite – the lights just dazzled that bit more impressively. 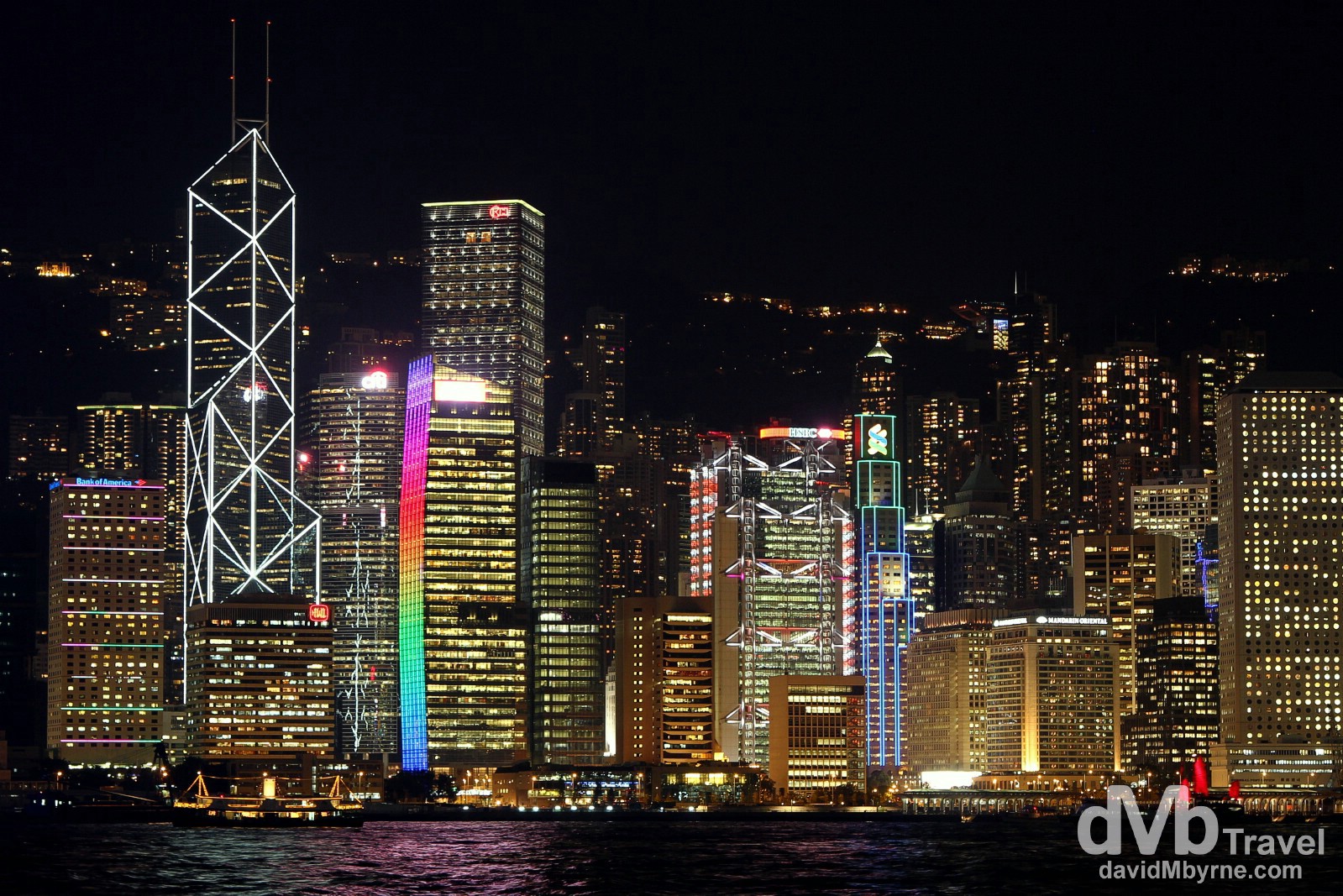 The Hong Kong Money Shot #1: The neon skyline of Central Hong Kong as seen from across Victoria Harbour in Kowloon. Seen to the left of this image is the 369-metre high Bank of China Tower which is, & has been since my first visit to Hong Kong in 2004, my favourite HK skyscraper – its distinctive praying mantis-esque look makes it stand out among the impressive crowd. Built in 1989, it was, and still is today, a controversial structure – its sharp edges & negative symbolism (all those X shapes its design), not to mention the fact that it’s orientated in the wrong direction, means it breaks some of the very basic codes of Feng Shui, the ancient Chinese practice of placement and arrangement of space to achieve harmony with the environment. Not so says the designer, Chinese American architect I. M. Pei, he of Louvre Pyramid in Paris, France fame, who claims that structural expressionism adopted in the design resemble growing bamboo shoots, symbolising livelihood and prosperity. Whichever side you’re on it remains a pretty impressive structure & a Hong Kong icon. Hong Kong ( 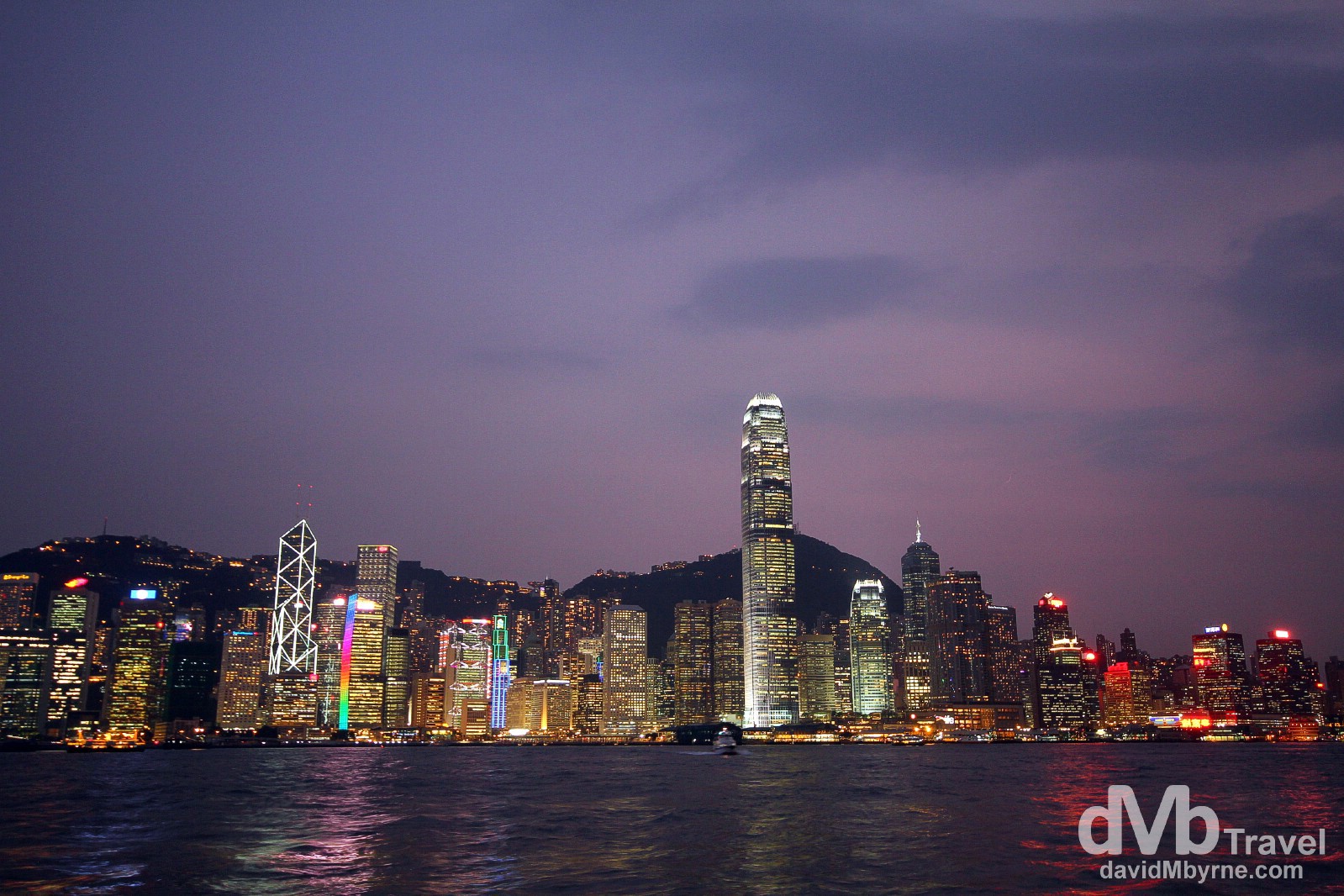 The skyline of Central Hong Kong as seen from across Victoria Harbour in Kowloon shortly after dusk. Hong Kong, China. October 17th 2012.

HK || A City of Contrasts

This was my third visit to Hong Kong, but first since 2005, and each one has been a very different experience. A city of contrasts, there’s a lot to do & see here even if you were to never venture out of the colony’s two main but very different areas – the bustling, crowded peninsula Kowloon, on the Chinese mainland side of Victoria Harbour, or glitzy, skyscraper-heavy, business-centred Central on Hong Kong Island. Coming here to photograph the city invariably means getting the 2 Hong Kong money shots – the above picture of the Central skyline from the waters edge in Kowloon & the following picture, the view of Central, Victoria Harbour & Kowloon from the 552-metre Victoria Peak observation overlooking Central on Hong Kong Island. 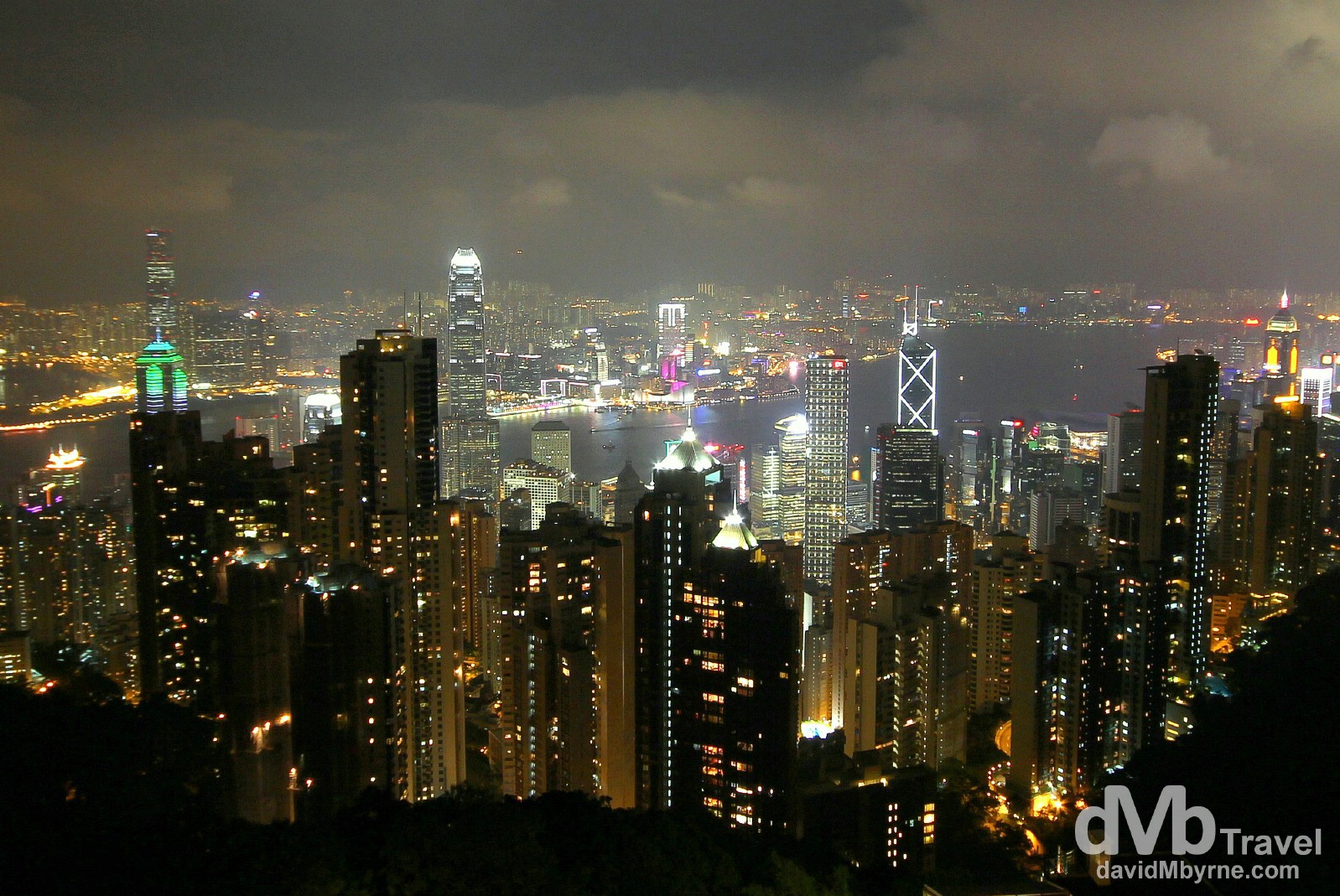 The Hong Kong Money Shot #2: The view of Central (foreground) & Kowloon (background) either side of Victoria Harbour as seen from Victoria Peak on Hong Kong Island. Experience has taught me that it’s a rarity indeed to get a clear view from up here at any time of day, but at least nightfall sees the lights from below dazzle & mask (most of) the smog hanging over the city – it is there. Hong Kong, China. October 19th 2012.

Kowloon is a mass of humanity 24/7 & as such it’s a great place for some street photography. The following picture was captured in the middle of Kowloon’s main drag, Nathan Road. Masses of in-a-hurry people would cross the road from each side at regular intervals so I had to wait a while to get this picture, one with a clear view of one of Hong Kong’s distinctive taxis. 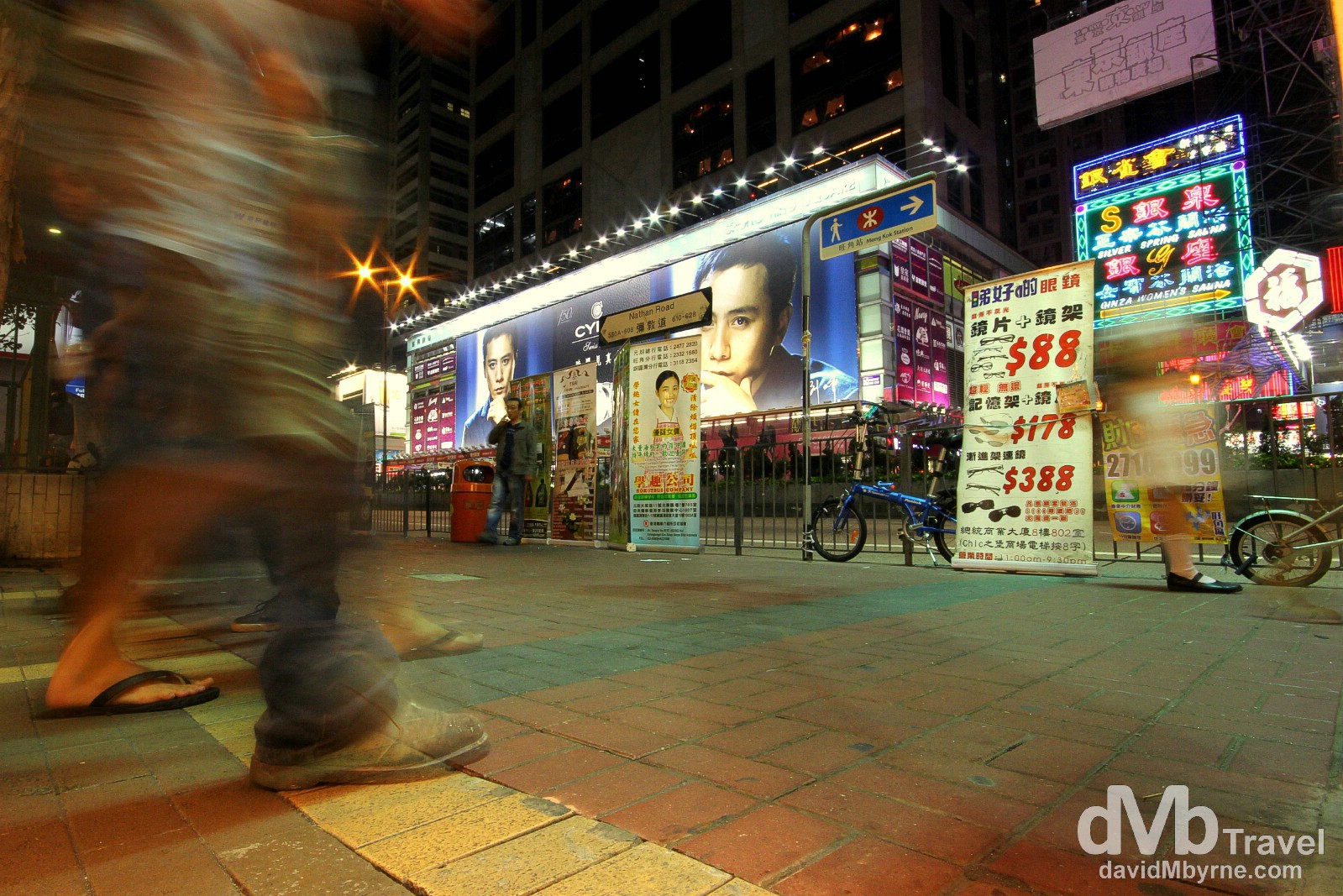 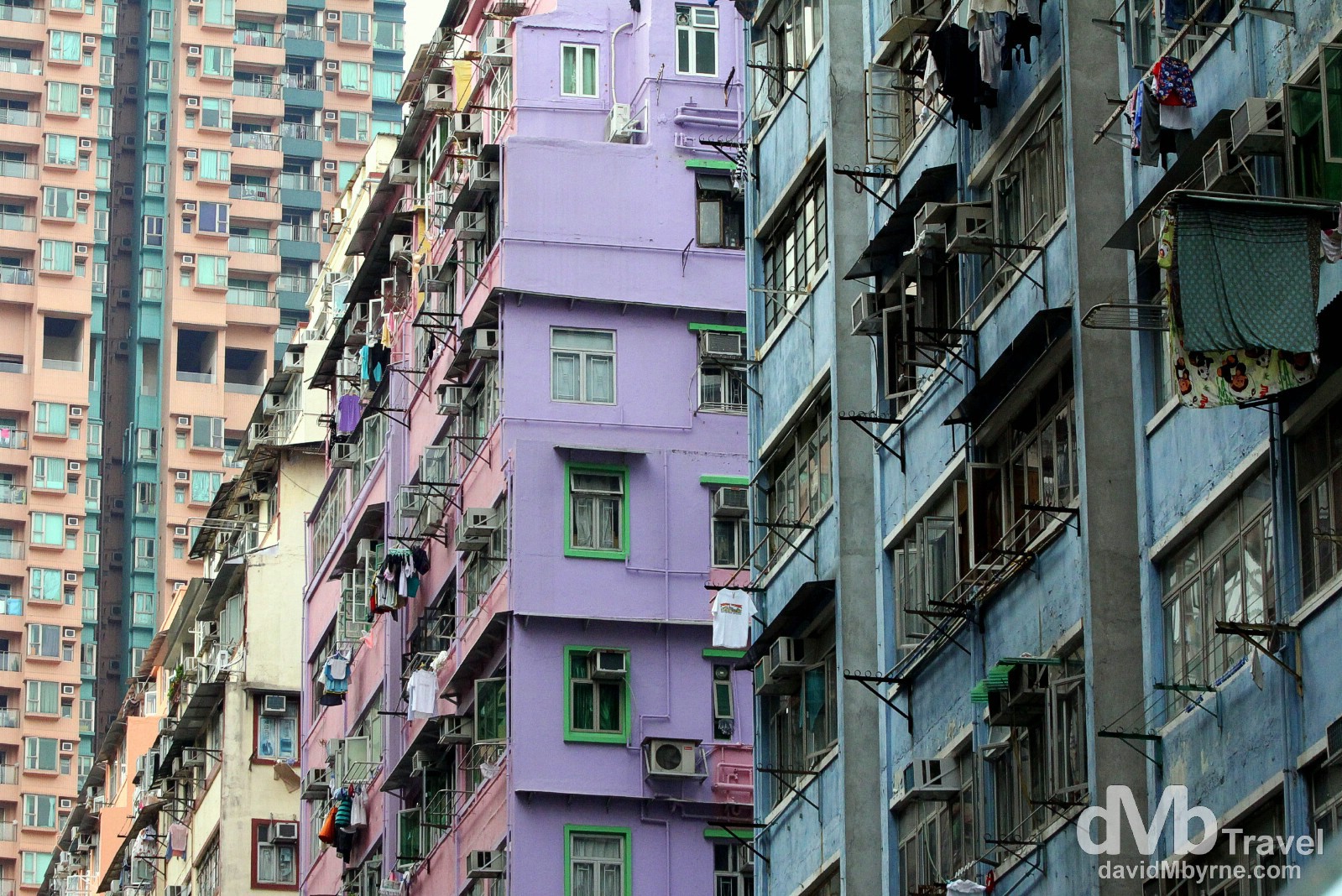 Dwellings in Kowloon. Space is a luxury few can afford much of in Hong Kong. With over 6,500 people per square kilometre jammed into its 1,100 square kilometre of space, it’s the 4th most densely populated urban area in the world. That explains why apartment blocks like these are a common sight, especially in the densely populated Kowloon peninsula. This sort of sight is hardly pretty (some might even claim it an eyesore) but at least all that boxy repetition is photogenic. Kowloon, Hong Kong, China. October 20th 2012.

This visit to Hong Kong wasn’t all about skyscrapers, vistas & mayhem. One of the newest HK attractions is Disneyland Hong Kong, somewhere that’s struggling to attract the hoped-for number of visitors since its 2005 opening. 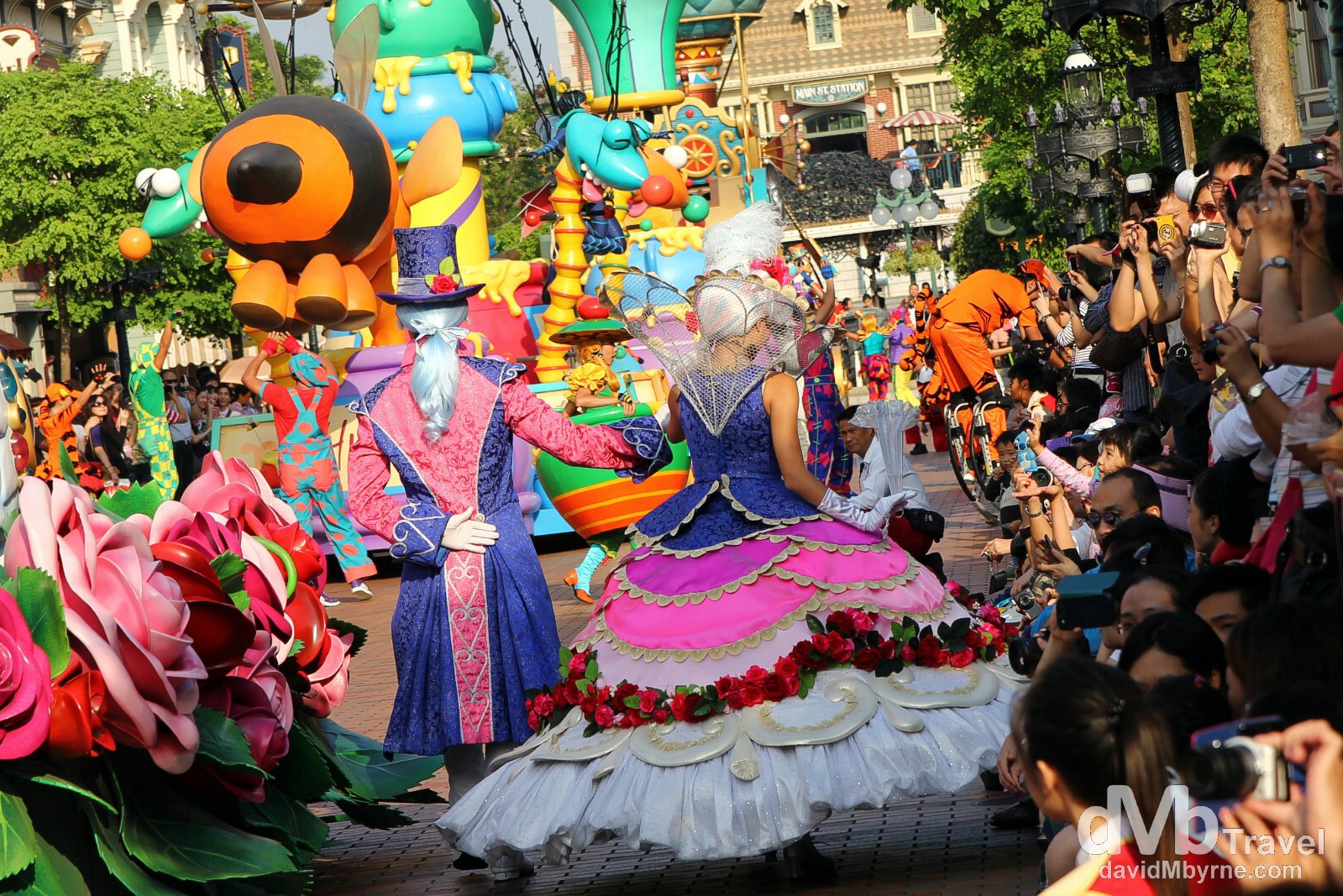 Needless to say Disneyland Hong Kong boasts the usual Disneyland stalwarts of themed lands (Toy Story Land, Fantasyland etc.) & the likes of Mickey, Minnie & friends, roller-coasters & merchandise shops are never too far away (it’s a small park). However, the highlight of the visit for me was the daily Flights of Fantasy Parade which sees all manner of colourful, smiling characters passing by. People enjoying the daily character parade at Disneyland Hong Kong. October 19th 2012.