An Economic Juggernaut, a Special Administrative Region of China, & Home To One Of The World's Great Cityscapes

“… the first thing I did… was to get the famous Star Ferry from Kowloon to Hong Kong Island, from where I caught the bus to the Peak… I stayed for a few hours watching the light die over Hong Kong and the dazzling lights of the city taking over. It was quite a spectacle.”

I‘ve just spent the last few days getting up close & personal with Hong Kong, the economic juggernaut that was once a British Colony but is now a SAR, or Special Administrative Region, of China. It’s my first visit here, somewhere that is home to a lot of people in not a lot of space, one of the world’s most famous natural harbours, & one of the world’s greatest & most photogenic cityscapes. 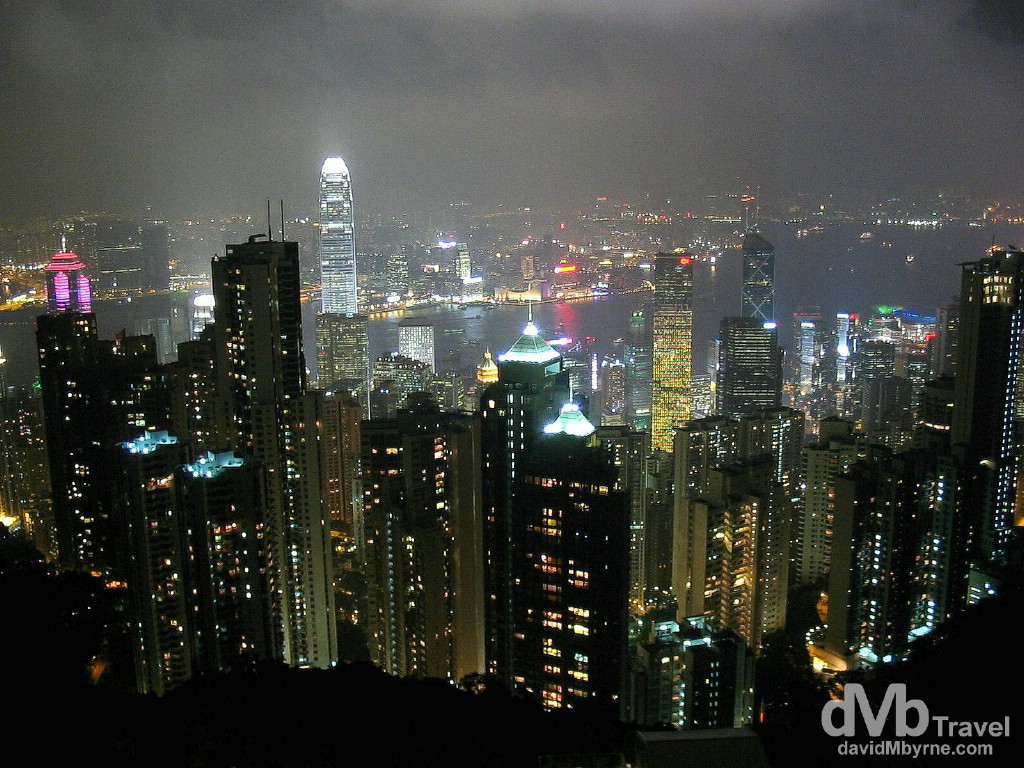 The towers of Central on Hong Kong Island (foreground), Victoria Harbour & Kowloon (background) as seen from Victoria Peak on Hong Kong Island. The territory of Hong Kong is comprised of 3 main areas – Hong Kong Island (where all the fancy buildings are found and all the money is made), the Kowloon Peninsula and the New Territories, the latter two being connected to the Chinese mainland and located across Victoria Harbour from Hong Kong Island – the various outlying islands are also classed as part of the New Territories. I had arrived off the train from Shanghai a few hours earlier and the first thing I did after sorting out my accommodation was to get the famous Star Ferry from Kowloon to Hong Kong Island, from where I caught the bus to the Peak. It was late afternoon when I got up here. I stayed for a few hours watching the light die over Hong Kong and the dazzling lights of the city taking over. It was quite a spectacle. Hong Kong (

Hong Kong || Central vs. Kowloon
Like Beijing & Shanghai before it, Hong Kong is a city of contrasts, this time between two main areas of the territory – Hong Kong Island and the Kowloon Peninsula, the latter being the part of the Hong Kong territory that is connected to the Chinese mainland. ‘The Island’ is what one would expect it to be – it’s modern and flashy with skyscrapers, expensive suits, Gucci and Dior shops and fancy cars. There was a definite smell of money in the air. Kowloon, on the other hand, is dirtier, more compact and is generally a mishmash of all kinds of nationalities, seemingly millions of shops & department stores (mainly clothes and electronics shops), restaurants, guesthouses, hotels, fast food outlets and markets. While you can be confident that any Rolex seen on the clean streets of Central on Hong Kong Island is the real deal, in Kowloon that same watch is probably a fake. And you’ll have ample opportunity to buy one; you’d be hard pressed to walk 100 yards without some immigrant, of which there are plenty, offering you a “copy Rolex?“, a “a nice suit for you, Sir?… good tailor for you, Sir?“, or even a “nice meal, Sir, cooked just for you?” Oh, and watch out for the drips from the overhead air-conditioning units as you pass out your rejections. Kowloon, it’s in-your-face & not a good place to shake off a headache but it’s a thoroughly enjoyable place to be nonetheless. 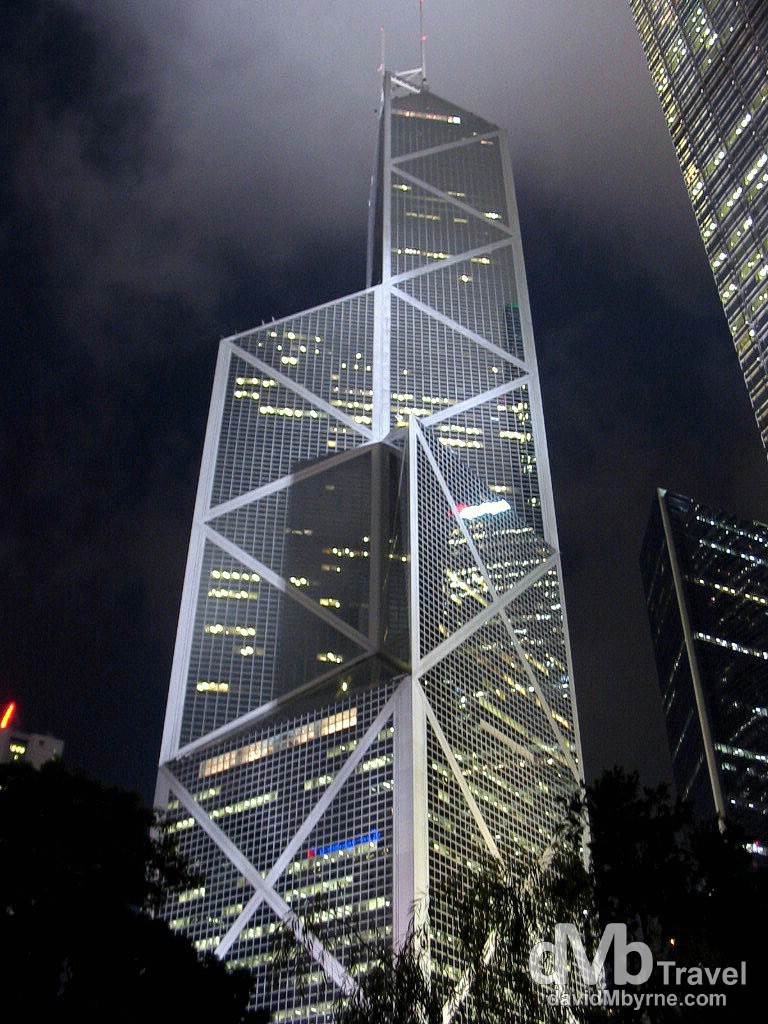 Central on Hong Kong Island is awash with futuristic skyscrapers. This is one of them that really stands out from the crowd, the 369 meter high Bank of China Tower. It’s the headquarters for the Bank of China and was built in 1989 at which time it was the tallest building in the city – it’s now the 3rd tallest. It was designed by a Chinese American architect called I. M. Pei, someone who has taken a lot of stick over the years from practitioners of Feng Shui, the ancient Chinese practice of placement and arrangement of space to achieve harmony with the environment – seemingly the building’s sharp edges, its negative symbolism (all those ‘X’ shapes), & the fact that it’s orientated in the wrong direction are big a Feng Shui no-nos. Supporters of the design counter that by quickly pointing out that the structural expressionism adopted in the design resemble growing bamboo shoots, symbolising livelihood and prosperity. I’m not too sure about any of that. I just like the look of the structure, one of Central’s most striking. The Bank of China Tower in Central, Hong Kong, China. September 2, 2004.

Some visitors dislike the speed, the obsessive materialism and the addiction to shopping, money and brand names that is Hong Kong but I enjoyed my few days in the territory. I did all the touristy things one would expect of a first time visitor to the city: I explored the back streets and parks of Kowloon; I got ‘The shot’ of Hong Kong Island from the Kowloon waterfront; I rode the Star Ferry to Hong Kong Island; I ogled at Central skyscrapers from their base; I took a ride on a Central tram; I visited Aberdeen to view some traditional sampans (boats); I escaped the materialism of Central & the hustle and bustle of Kowloon for an afternoon by visiting the relative quiet of Lamma Island, one of the territory’s outlying islands; & of course I visited Central’s Victoria Peak for the ultimate view of the territory, the twinkling, nighttime view of Central skyscrapers, Victoria Harbour & the Kowloon waterfront. Pictures found here will give pictorial proof of all those escapades. 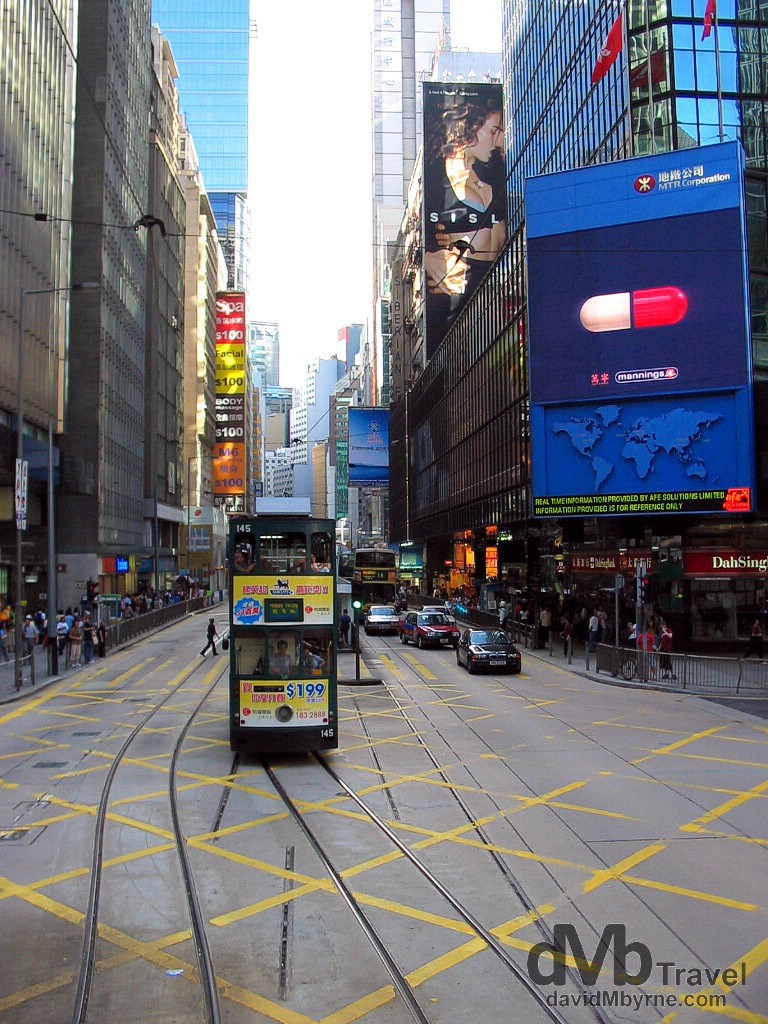 You get a glimpse of the past on the modern, hi-tech streets of Central on Hong Kong Island thanks to the trams that still today rattle along tracks that were laid in 1904, tracks that run past the base of ultra-modern skyscrapers. The trams are still as popular today as ever they were but sadly only run along Central’s Des Voeux Road. It’s a great way to travel especially if, like me, you manage to get the front seat upstairs. Trams in Central, Hong Kong. September 4, 2004. 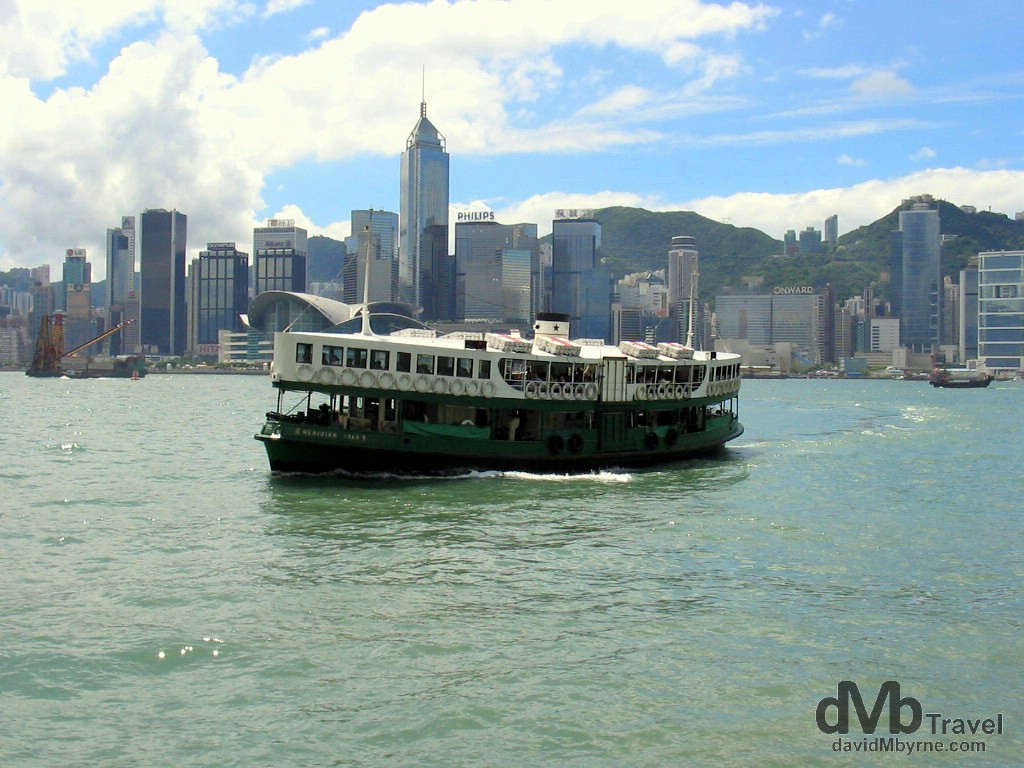 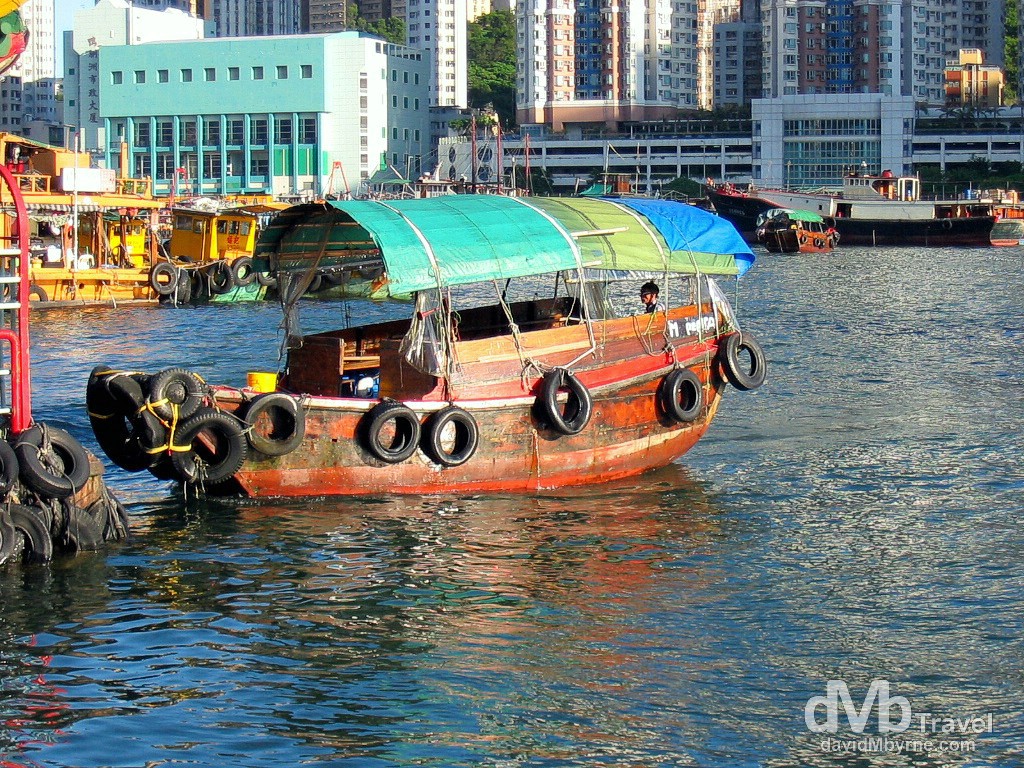 You need to head across to the other side of Hong Kong Island to see these Sampans, traditional fishing boats & more remnants of Hong Kong’s past – sampans used to ferry people across Victoria Harbour long before the Star Ferry came into service. Today their duties have been relegated to nothing more than ferrying tourists on trips around Aberdeen Harbour, although there are still some of them being used as fishing boats and homes to a dwindling minority. Aberdeen Harbour, Hong Kong. September 4, 2004. 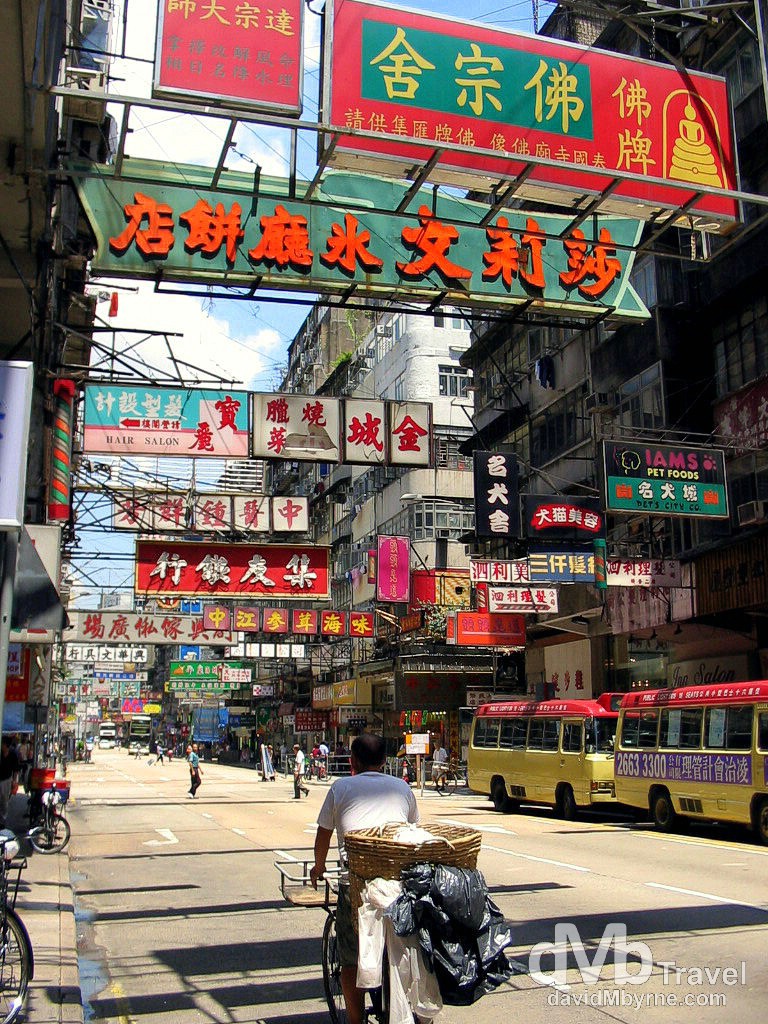 A typical street in the Yau Ma Tei area of Kowloon. Like most streets in the area, advertising hoardings virtually enclose the street giving the area a totally different feel to Central on Hong Kong Island. Yau Ma Tei, Kowloon, Hong Kong. September 5, 2004. 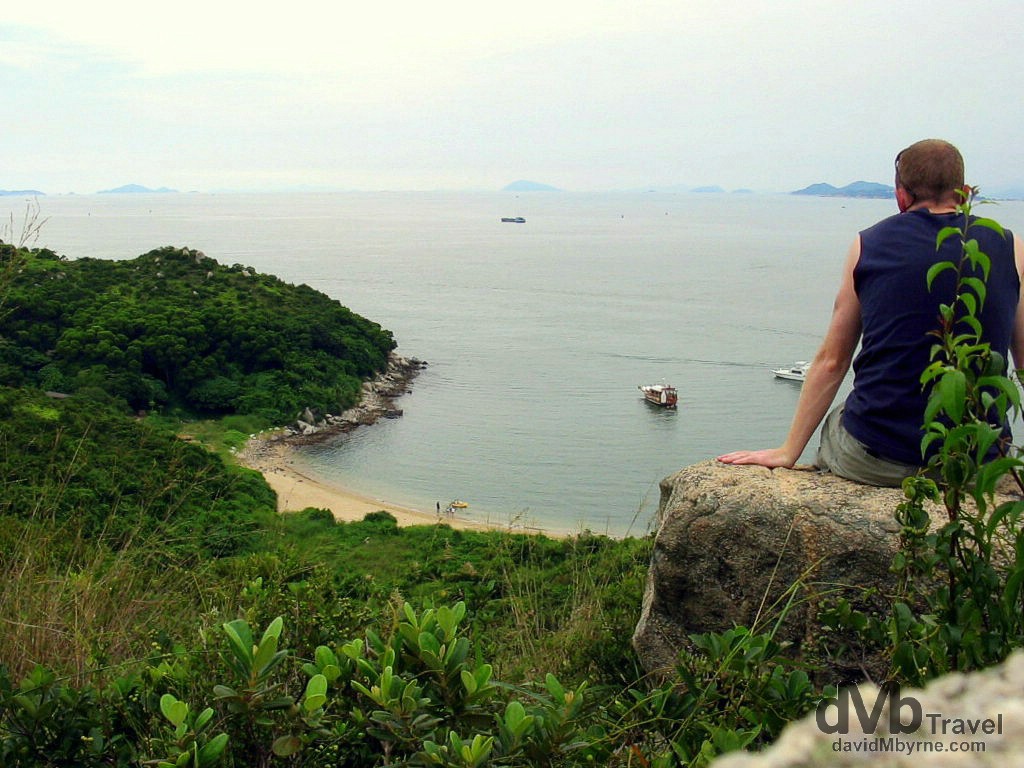 I escaped Kowloon for an afternoon and paid a visit to Lamma Island, one of the outlying islands of the New Territories. A convenient walk connects both ends of the island, a walk that takes about an hour and brings you past some nice secluded bays and beaches, a vast contrast to the build-up of Kowloon and Central. Even more convenient is the fact that there is a ferry terminal at either end of the island so you can, and I did, get dropped off at one end of the island and walk to the other end to get the ferry back to Central. Lamma Island, The New Territories, Hong Kong. September 5, 2004. 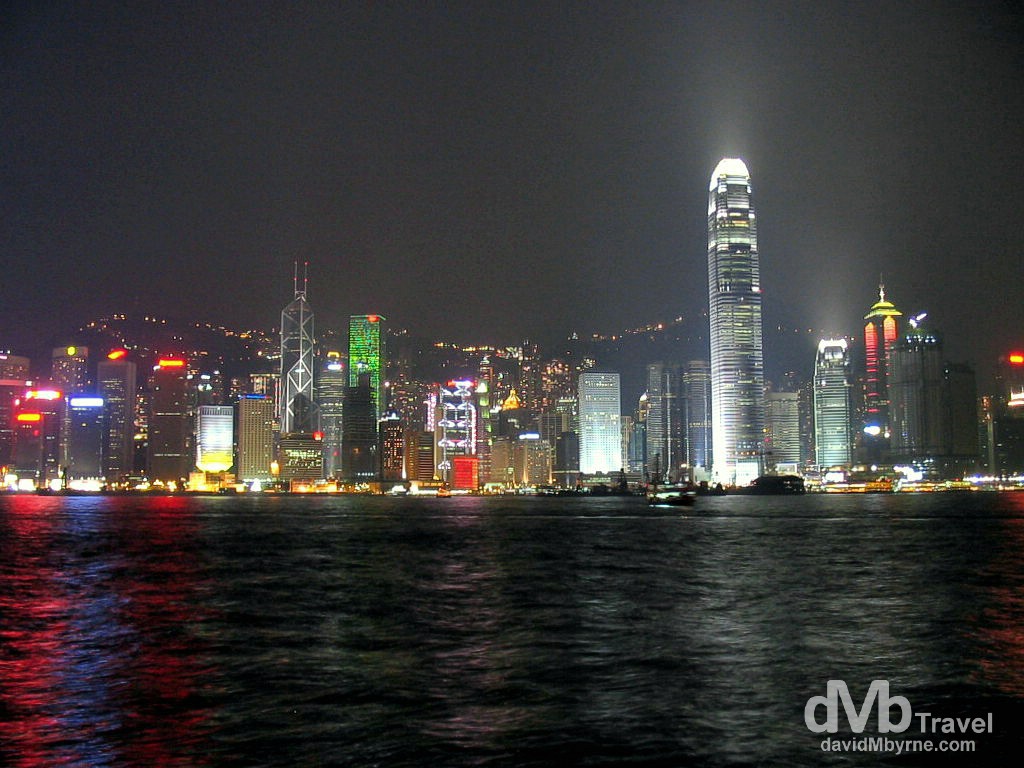 The view of the Central skyline on Hong Kong Island as seen from the harbour front in Kowloon. September 5, 2004. 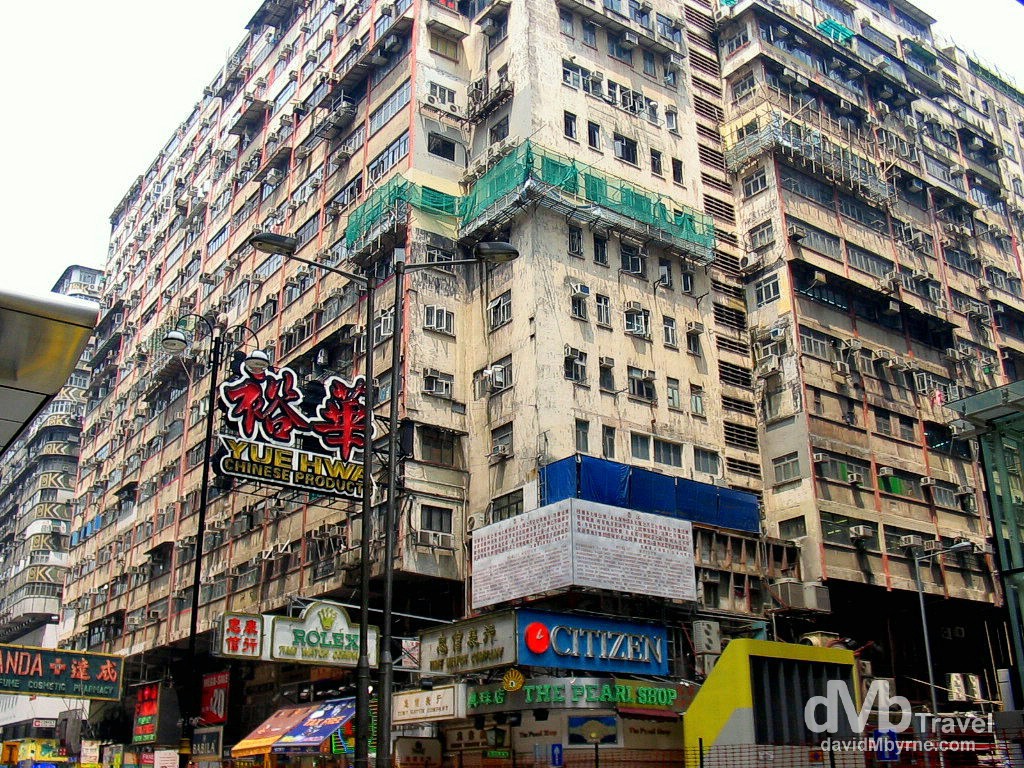 Home sweet home. This is Chungking Mansions, Kowloon’s walled city within a city and a name that any budget traveller to Hong Kong will recognise. Built in 1961 to accommodate Chinese residents, today it’s possibly the only place in Hong Kong where one can get a bed at reasonable rates. But you get what you pay for; the place is a disorienting labyrinth of dingy guesthouses, curry restaurants, African bistros, clothing shops, sari stores, and foreign exchange offices. The building acts as a gathering place for some of the ethnic minorities in Hong Kong, particularly Nigerians and people from the Middle East & Indian subcontinent. A far cry from the legions of fancy hotels dotted around the territory but fine for a few nights (and the budget). Nathan Road, Tsim Sha Tsui, Kowloon, Hong Kong. September 6, 2004.

Moving On
A ferry across the water to Macau.

Subsequent Years Of China Travel
More from subsequent, 2005 & 2012 visits to Hong Kong. Plus, all posts from China over the years.