China’s Vegas. A Former Portuguese Colony Steeped In History, Now A SAR of China & One Of Asia’s Biggest Gambling Meccas

“The last piece of Asian land to be under foreign rule… fast developing into one of Asia’s biggest gambling meccas, with casinos popping up seemingly overnight, one of which I was prevented from entering due to my inappropriate footwear.”

After my first experience of Hong Kong, it was time to get my first experience of another Chinese SAR (Special Administrative Region), this time the former Portuguese colony of Macau situated 60 kilometres west of Hong Kong Island. This little corner of China was settled by Portuguese traders in the 16th century and grew due to it importance as a port. It was the last piece of Asian land to be under foreign rule until it was given back to the Chinese government in 1999, 2 years after Britain handed back Hong Kong. Christianity was first introduced into Asia from Portuguese Jesuit’s in Macau & many of the colony’s gorgeous Catholic churches they constructed still stand and are in use today. While it may only be 60 kilometres from Hong Kong, it feels another world away. The whole place has all the characteristics of a Portuguese town including narrow cobbled streets, arched buildings, people zipping around on scooters, Portuguese cake shops and, of course, the requisite tiled town square. Indeed, one could be forgiven for thinking they were not in China at all but I guess that was the aim of the Portuguese traders who settled here way back when; a little bit of home away from home.

Today the territory has developed industries such as textiles, electronics and toys, as well as building up a significant tourist industry with a wide choice of hotels, resorts and casinos – this is fast developing into one of Asia’s biggest gambling meccas, with casinos popping up seemingly overnight, one of which I was prevented from entering due to my inappropriate footwear. 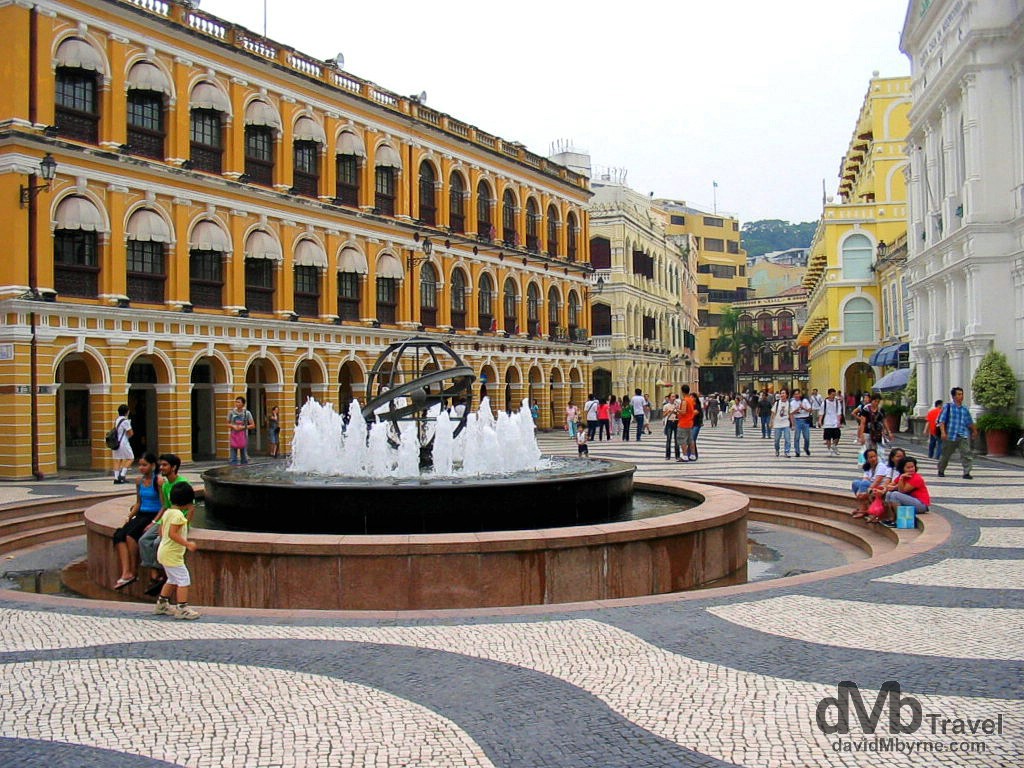 The epicentre of the former Portuguese colony of Macau, not to mention the epicentre of the present-day UNESCO World Heritage listed Historic Centre of Macau, is Largo do Senado, Senate Square. The small square, lifted straight out of Portugal, is overlooked by many impressive buildings, including the Leal Senado, the seat of Macau’s government during its time as a Portuguese colony. The building was erected in 1784 and after the handover of Macau to China in 1999 it became the headquarters of the Institute of Civic & Municipal Affairs. Largo do Senado (Senate Square), Macau (

Macao, a lucrative port of strategic importance in the development of international trade, was under Portuguese administration from the mid-16th century until 1999, when it came under Chinese sovereignty. With its historic street, residential, religious and public Portuguese and Chinese buildings, the historic centre of Macao provides a unique testimony to the meeting of aesthetic, cultural, architectural and technological influences from East and West. The site also contains a fortress and a lighthouse, the oldest in China. It bears witness to one of the earliest and longest-lasting encounters between China and the West, based on the vibrancy of international trade.

– UNESCO commenting on the Historic Centre of Macau 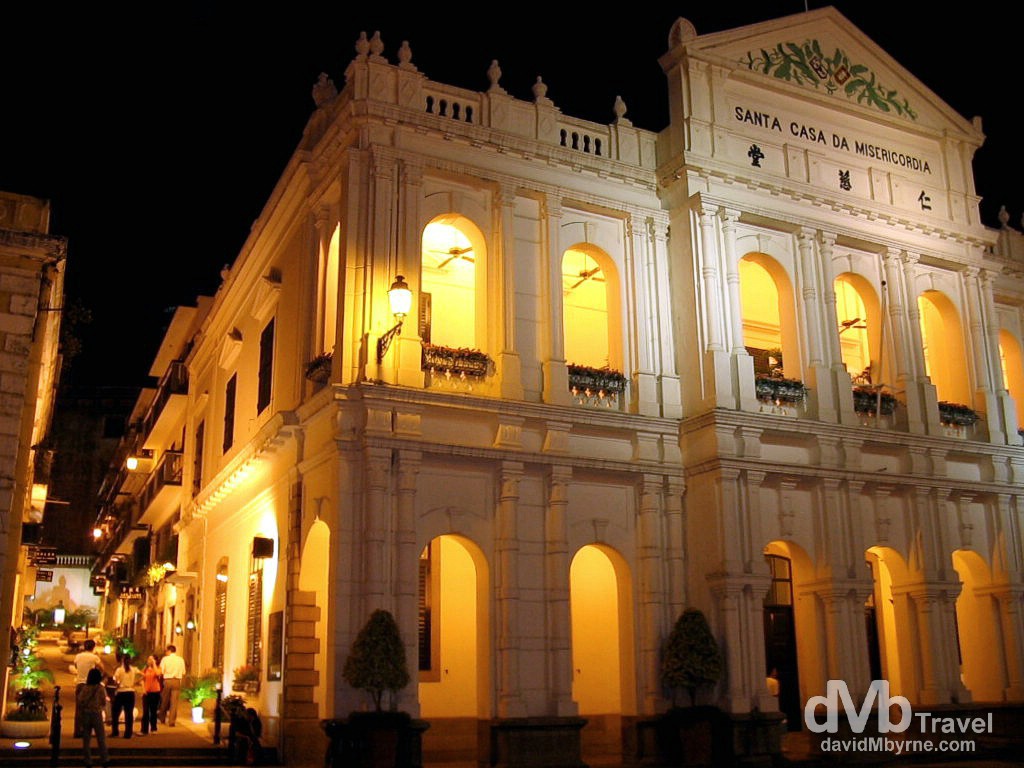 Another impressive building off Largo do Senado (Senate Square), this one, Santa Casa Da Misericordia, Holy House of Mercy of Macau, an historic white building established as a branch of the Santa Casa da Misericórdia, a Portuguese charity founded in Lisbon in 1498 by the Queen Leonor of Portugal. The building was constructed in 1569 on the orders of the Bishop of Macao. Over the years it has served as a medical clinic, an orphanage and refuge for widows of sailors lost at sea. Largo do Senado (Senate Square), Macau. September 7, 2004. 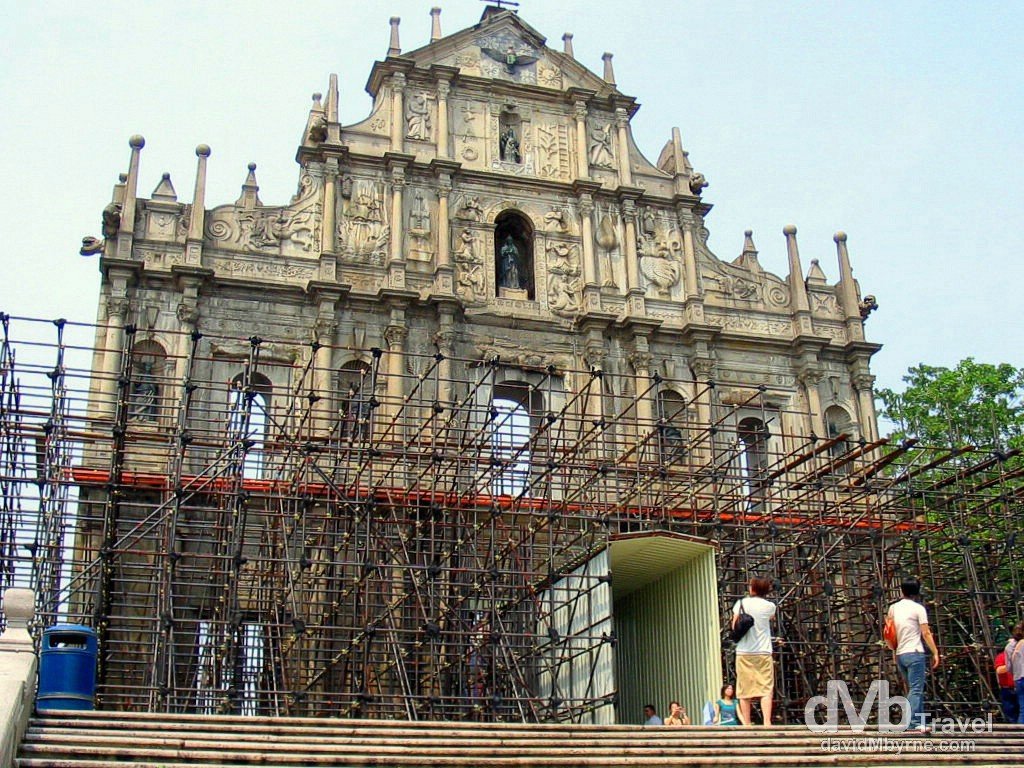 Scaffolding covering the façade of the ruins of Sao Paulo, once hailed as the greatest Christian monument in East Asia but today only survives as a façade. Housing numerous statues, the façade is the only part of the church to remain standing after an 1835 fire which destroyed the rest of the church. Behind the church, in what was its crypt, is a small but awesome museum detailing the history of the Catholic fate in the colony, the first place in SE Asia where Christianity took hold. Macau. September 7, 2004. 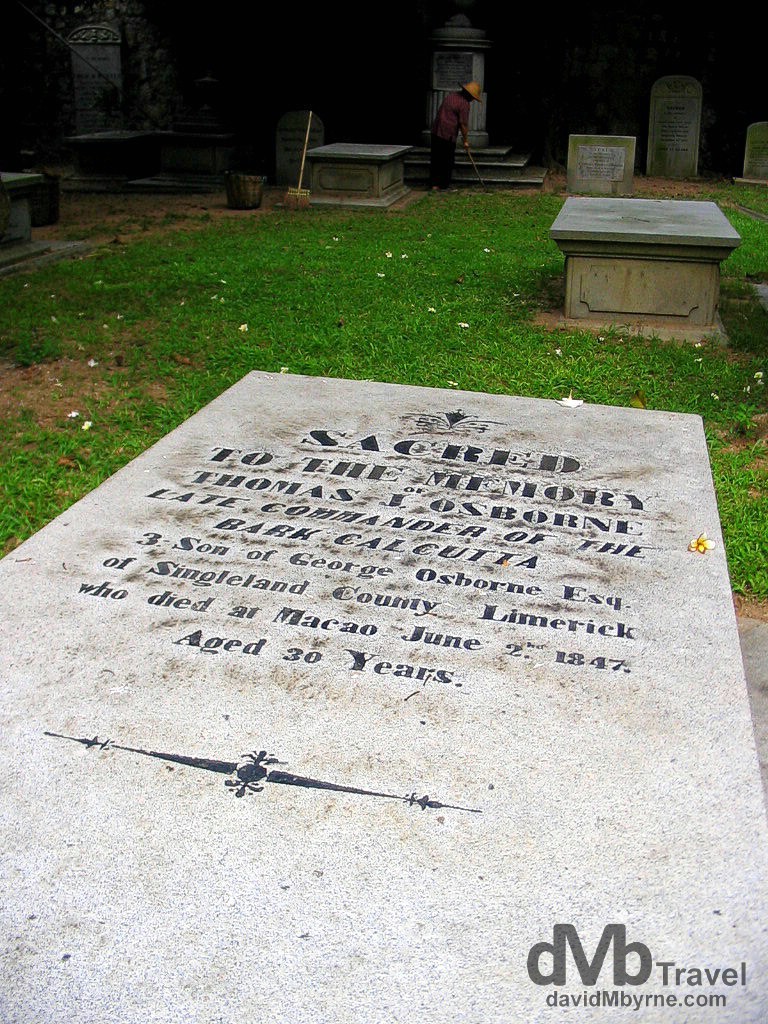 A gravestone in Macau’s Protestant Graveyard. Any non-Catholic who died in the strongly Catholic Portuguese colony of Macau was buried in this cemetery. The gravestones were recently restored and were quite legible. Deciphering the inscriptions about the individuals made for some very poignant reading. Most of the burials took place around the middle of the 17th century. The vast majority were male, mostly sailors, traders or adventurers. The average age at death was about 35-40; some were younger but very few were older. This gravestone caught my attention – Mr. T. J. Osborne from Limerick, Ireland. A gravestone in the Protestant graveyard in Macau. September 7, 2004. 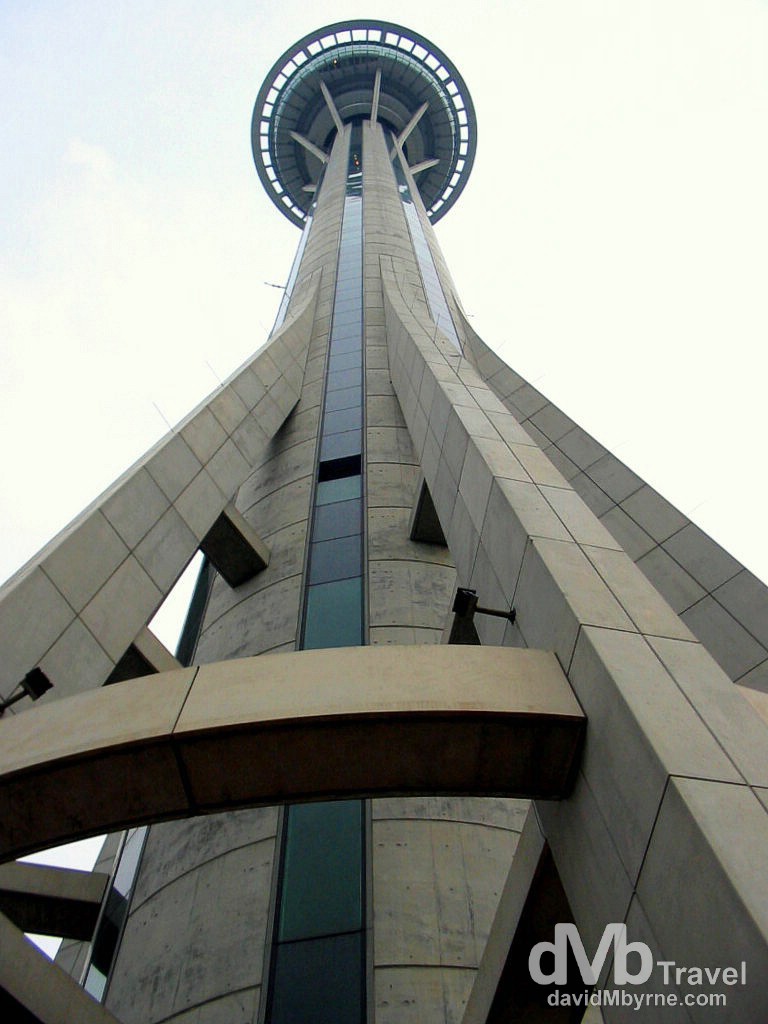 While the Macau Tower can boast of having the requisite observation deck and restaurant, it can also boast of sporting a few different attractions, namely the Skywalk X, a walking tour around the outer rim, and the Skyjump, an AJ Hackett bungee jump from the tower’s outer rim which, at 233 metres, is the highest bungee in the world. And if you want something else to do you can even climb right to the top of the telecommunication needle, assuming the weather is good and you have the balls to do so. Yes, this is certainly the tower for the adrenaline junkies. The Macau Tower, Macau. September 7, 2004.

Moving On
Back to ‘mainland’ China, to the relative calm of Yangshou & the Li River.

Subsequent Years Of China Travel
More from a subsequent 2005 visit to Macau. Plus, all posts from China over the years.