“Finally, after almost 3 weeks in China, I had found somewhere quiet and laid-back, and I took advantage of it.”

The border crossing from Macau to the Chinese mainland was uneventful, as uneventful as a border separating China from China can be. A bus ride to Guangzhou (commonly known in the West as Canton) & an overnight hard-sleeper-class train later and I found myself in Guilin in China’s southern Guangxi province. I knew arriving in Guilin that there wasn’t anything of interest for me there. While it’s one of China’s most picturesque cities, its tourist infrastructure is totally geared towards the more affluent tourist and the city has yet, it seems, to develop an appreciation for the backpacker dollar. The reason for this is location; the city sits on the banks of the Li River, a 100 kilometre stretch of which is famous for its scenery. It’s here you find the classic Chinese scene of tall karst (weathered limestone) peaks rising from the still, green waters, and you’ll maybe even be treated to the sight of a Cormorant fisherman plying his trade. I was. It’s the tourists coming from all over the world to experience these sights that Guilin caters for, making it a not very welcoming place for backpackers. Enter Yangshou. 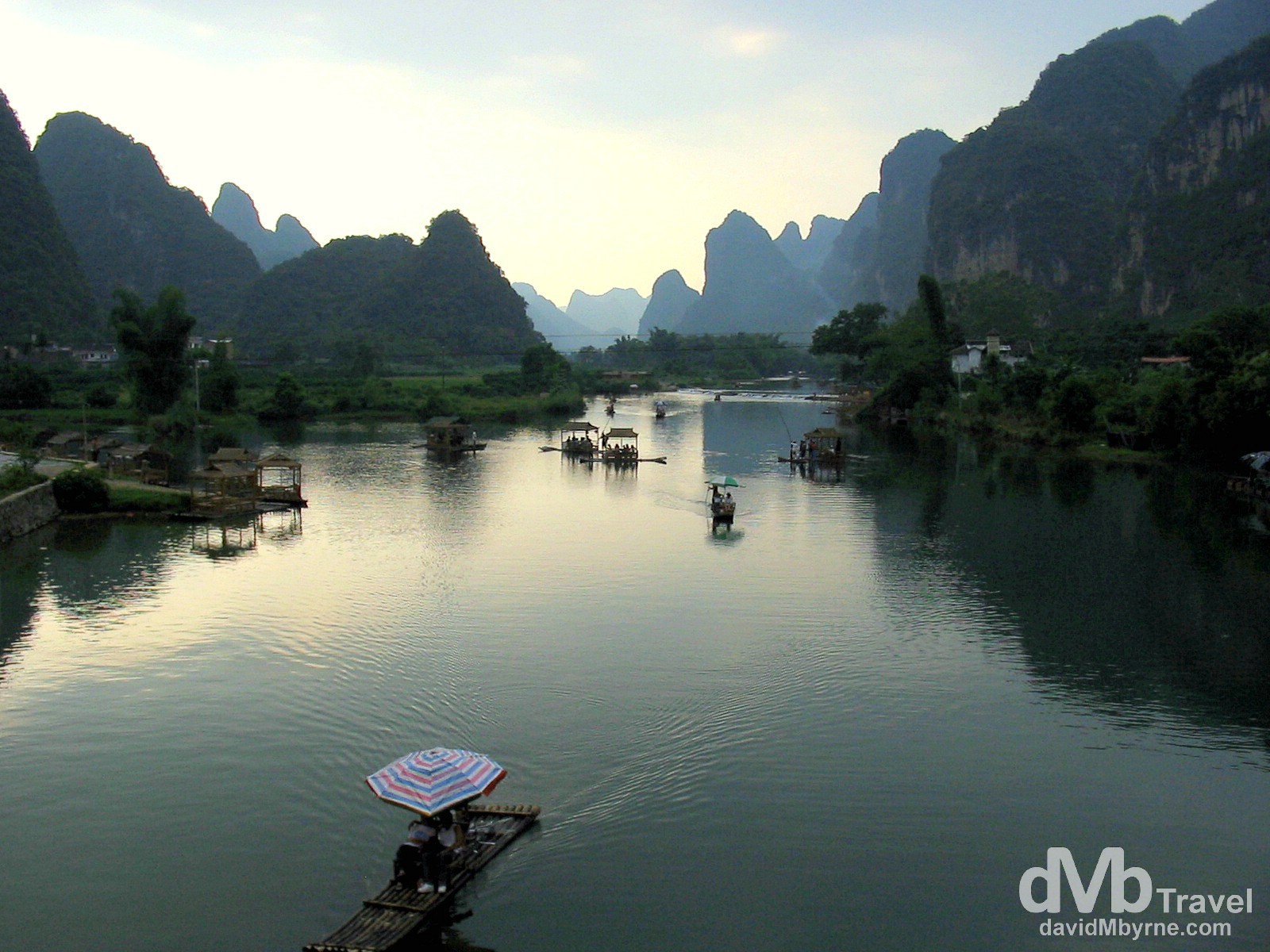 A popular activity in this part of the world is to get punted on the Li River, and who wouldn’t want to among these idyllic UNESCO-listed surrounds. This is a picture of locals and tourists alike enjoying such an experience from a bridge overlooking the river on the outskirts of the town of Yangshou, the budget traveller’s Li River destination of choice. Yangshuo (

South China Karst is one of the world’s most spectacular examples of humid tropical to subtropical karst landscapes. It is a serial site spread over the provinces of Guizhou, Guangxi, Yunnan and Chongqing and covers 176,228 hectares. It contains the most significant types of karst landforms, including tower karst, pinnacle karst and cone karst formations, along with other spectacular characteristics such as natural bridges, gorges and large cave systems. The stone forests of Shilin are considered superlative natural phenomena and a world reference. The cone and tower karsts of Libo, also considered the world reference site for these types of karst, form a distinctive and beautiful landscape. Wulong Karst has been inscribed for its giant dolines (sinkholes), natural bridges and caves.

Yangshou
Eighty kilometres downriver of Guilin is the small village of Yangshuo, the same Yangshuo the Guilin tour operators send their affluent tourists to, via boat, on day trips. And if Guilin doesn’t want the budget dollar then they will be more than happy to take it in Yangshuo. Having arrived in Guilin train station off the overnight train from Guangzhou it wasn’t too hard to find the next departing minibus to Yangshuo (they’ll find you, rest assured), and within 2 hours of stepping of the train I was sitting in a Yangshuo café having breakfast. Or was it lunch? 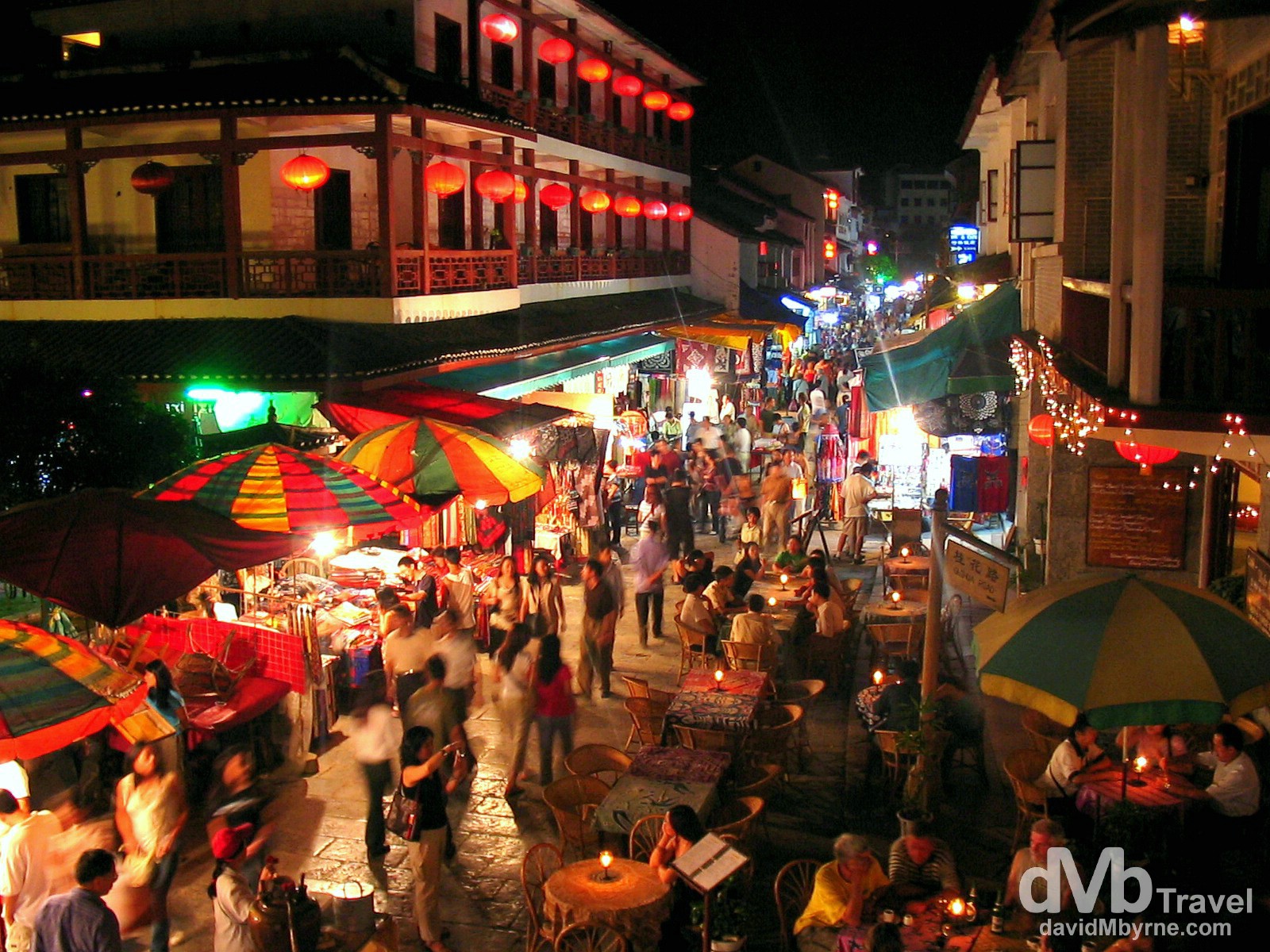 Nighttime in Yangshuo as captured from the upper floor of one of Yangshuo’s many café/restaurants. The town is never really busy – it’s just a little busier in the evenings when the crowds are out and all cafes, bars and stalls are open for business. Yangshuo, Guangxi Province, southern China. September 12, 2004.

Finally, after almost 3 weeks in China, I had found somewhere quiet and laid-back and I took advantage of it. Yes, Yangshuo is a major backpacker draw and as a result it’s very touristy – it’s as close to Thailand or Vietnam as you’ll presently find in China, complete with legions of budget accommodation options, tourist-tat craft shops, & English menu backpacker cafes – toast, banana pancakes and beer are never too far away. It’s still a lovely place to hang out for a few days, especially in the evenings when I’d pass time sitting in a local restaurant sipping beer and chatting with fellow travellers. And unless you’re the type who comes here to rock climb then there is not much else to do. I kept busy by taking a few walks in the surrounding countryside, I checked out the village market more than once, & embarked on an unofficial trip on the Li River. I also scaled a few karst peaks, drank a little too much, & hired a bike to further explore the countryside and its villages. And if you can think of anything else to do in Yangshuo then please let me know. 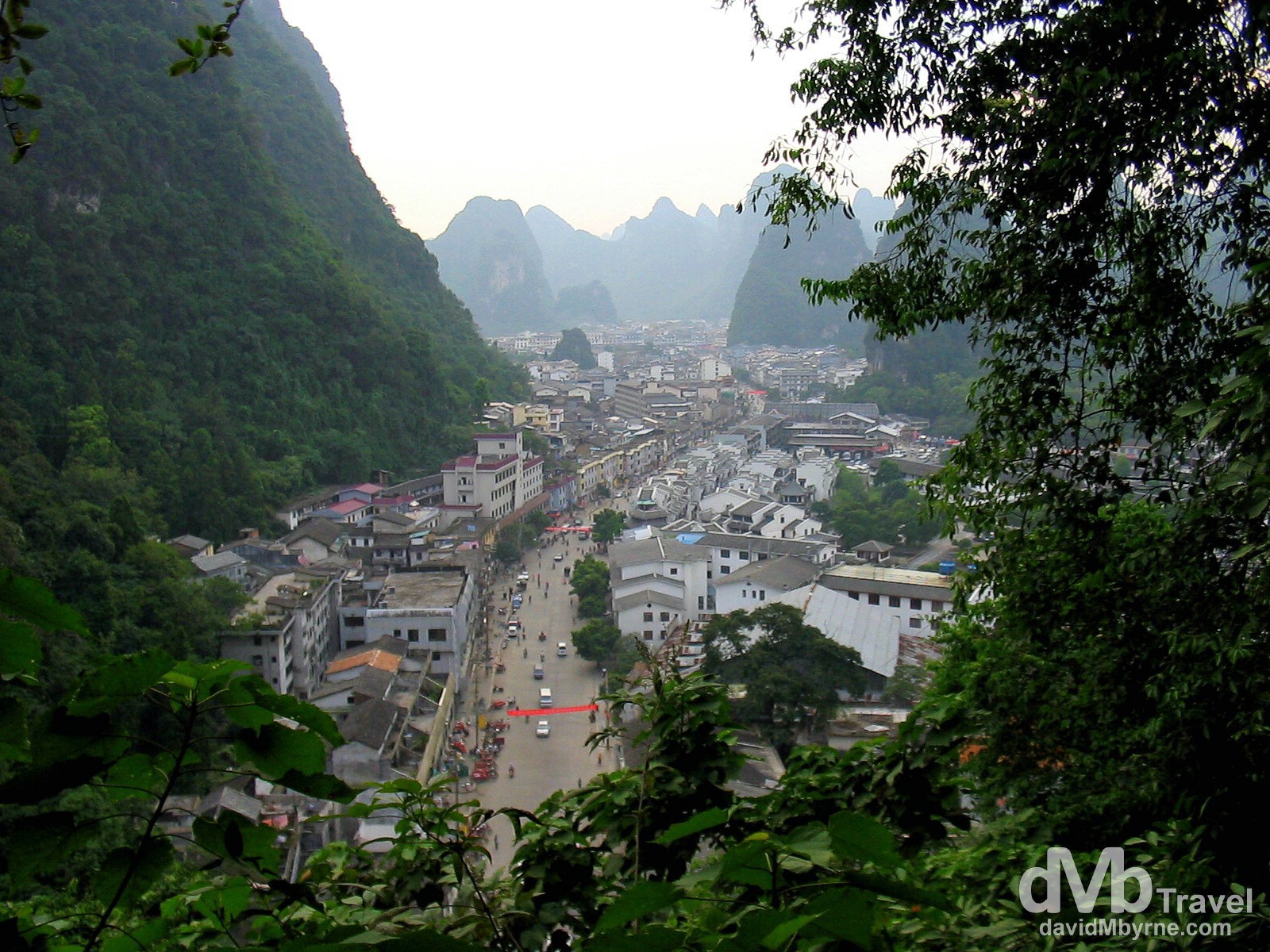 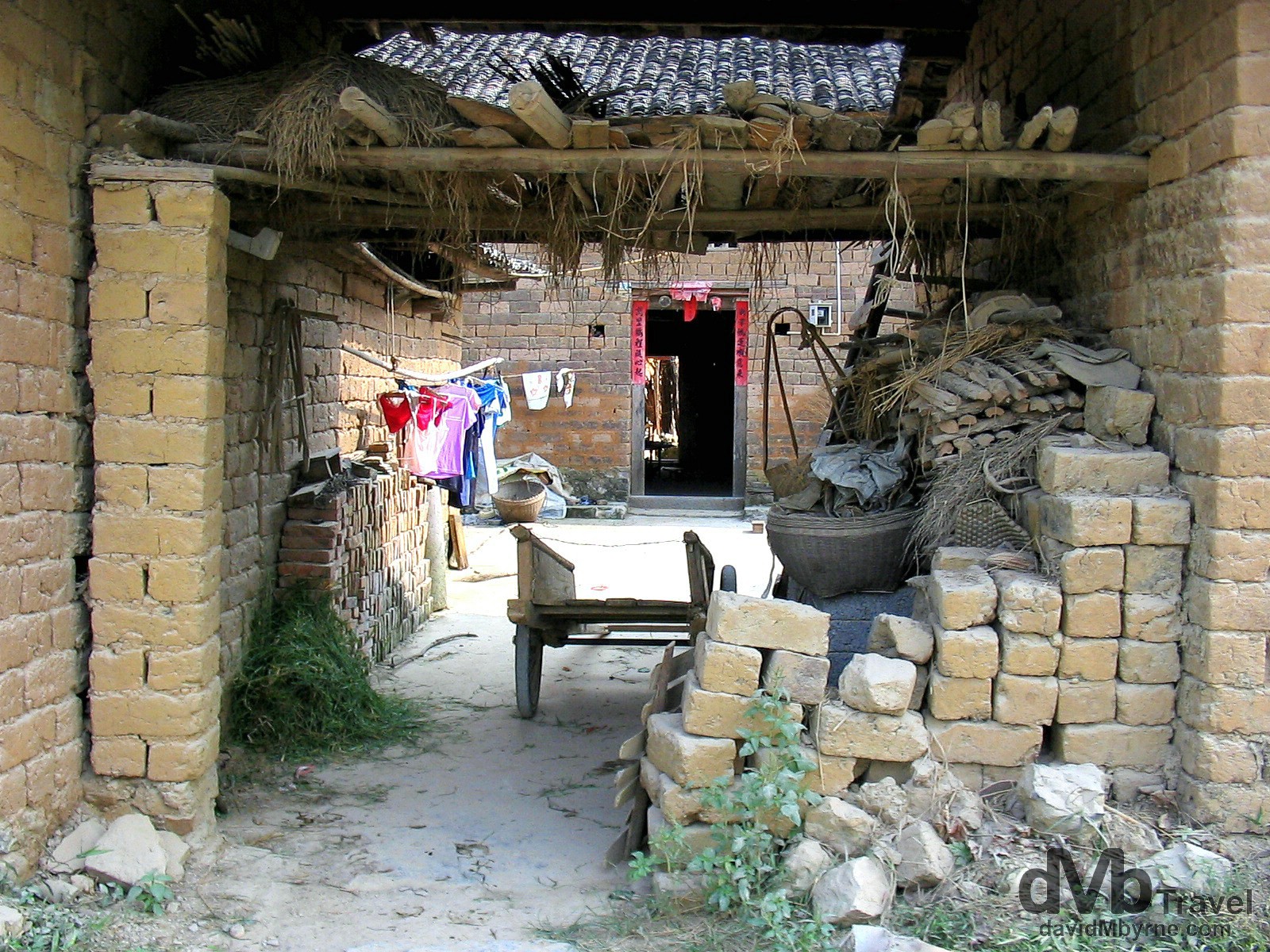 A village in the countryside outside Yangshou. The vast majority of the villages I saw were very rural, with the villagers tending to the land with primitive tools just like, I’d imagine, they have done for centuries. It will certainly be a while, if at all, before the benefits of the present Chinese economic boom, so evident in Beijing and Shanghai, will be felt in areas like these. Official Chinese government figures claim that the Chinese poverty rate has dropped from 53% of population in 1981 to 8% in 2001. That’s a hard statistic to swallow in places like this. Guangxi Province, southern China. September 11, 2004.

A local working in a rice paddy in the countryside outside Yangshou, Guangxi Province, southern China. September 10, 2004. 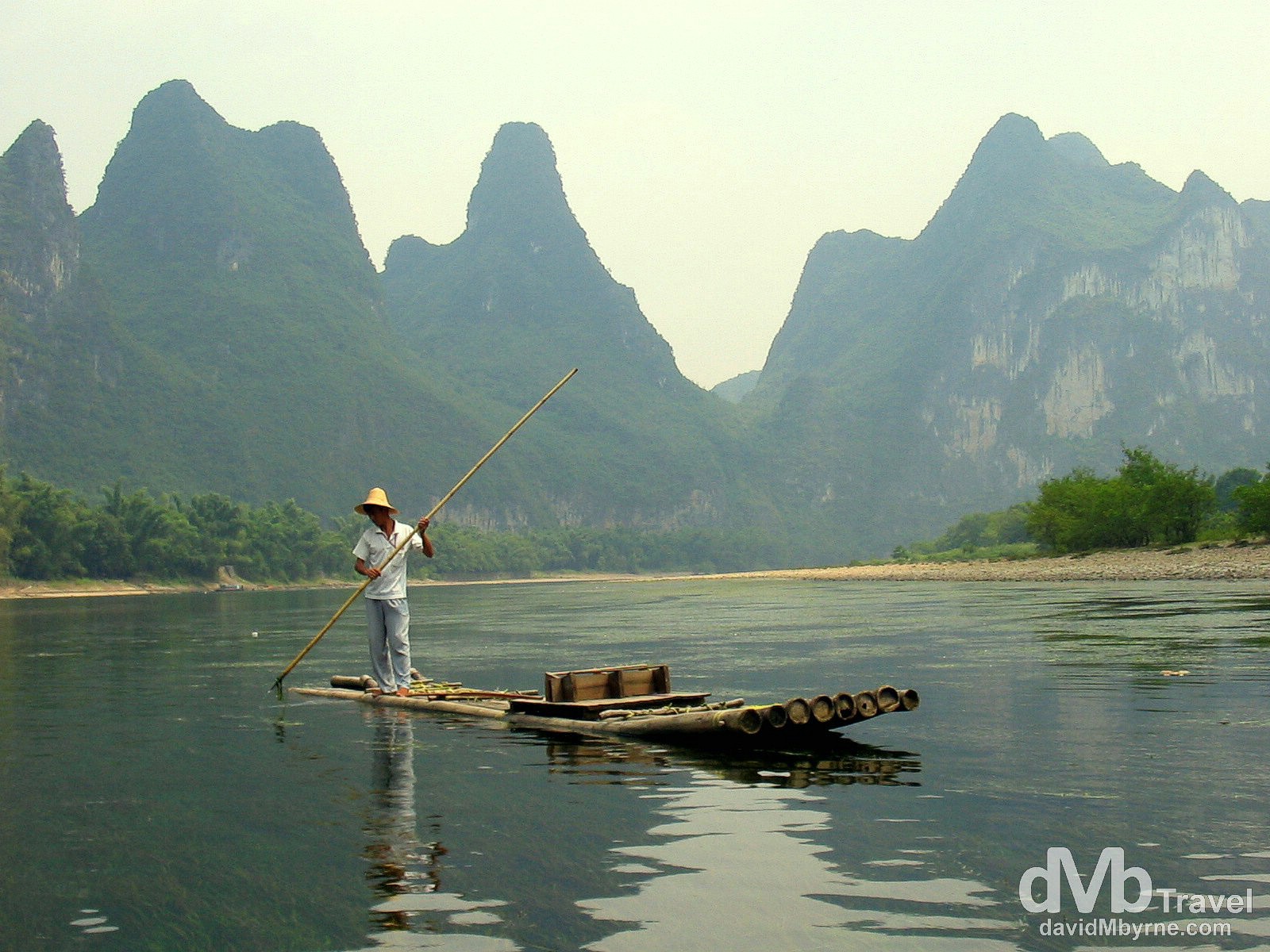 The tour operators upstream in Guilin have a monopoly on the lucrative Li River cruises and most of them are priced out of the range of the average budget traveller. But it’s not too hard to overcome this little obstacle as there are numerous (unofficial) agents in Yangshou offering trips on the river. The river is regularly policed by unmarked boats to ensure such trips don’t take place, so it’s a big risk for the boaters who agree to take tourists like me on the river, a risk they are prepared to take nonetheless. The trip I embarked upon saw me being dropped off at a discrete location upstream from Yangshou where I was bundled into a boat for an hour jaunt up the river. I passed some nice scenery which, needless to say, is the whole point of the trip – the scenery along this section of the Li river is famous China-wide as a picture of the karst peaks seen here appear on the back of the Chinese 20RMB (€2) note. However, the highlight for me was the constant ducking and diving in and out of the boat to take sporadic pictures of the surroundings. The boat owner’s concerns were obvious & I had to stay out of sight whenever possible for fear of drawing attention to the unlicensed boat – getting caught wouldn’t have affect me but the punishment for the boat owner would be, no doubt, severe. The ‘cruise’ ended after about an hour and I was deposited on the banks of the river, seemingly in the middle of nowhere, and told buses back to Yangshou departed at regular intervals from a nearby village, a few minutes walk up river. Not quite – the walk to the nearest village, Xing Ping, turned out to be a bit further than I was led to believe & after an hour of walking I chartered a bamboo raft to take me the rest of the way to the village. It was a great trip and was more enjoyable, albeit slower, than the boat cruise & it was from the raft I captured the above picture. 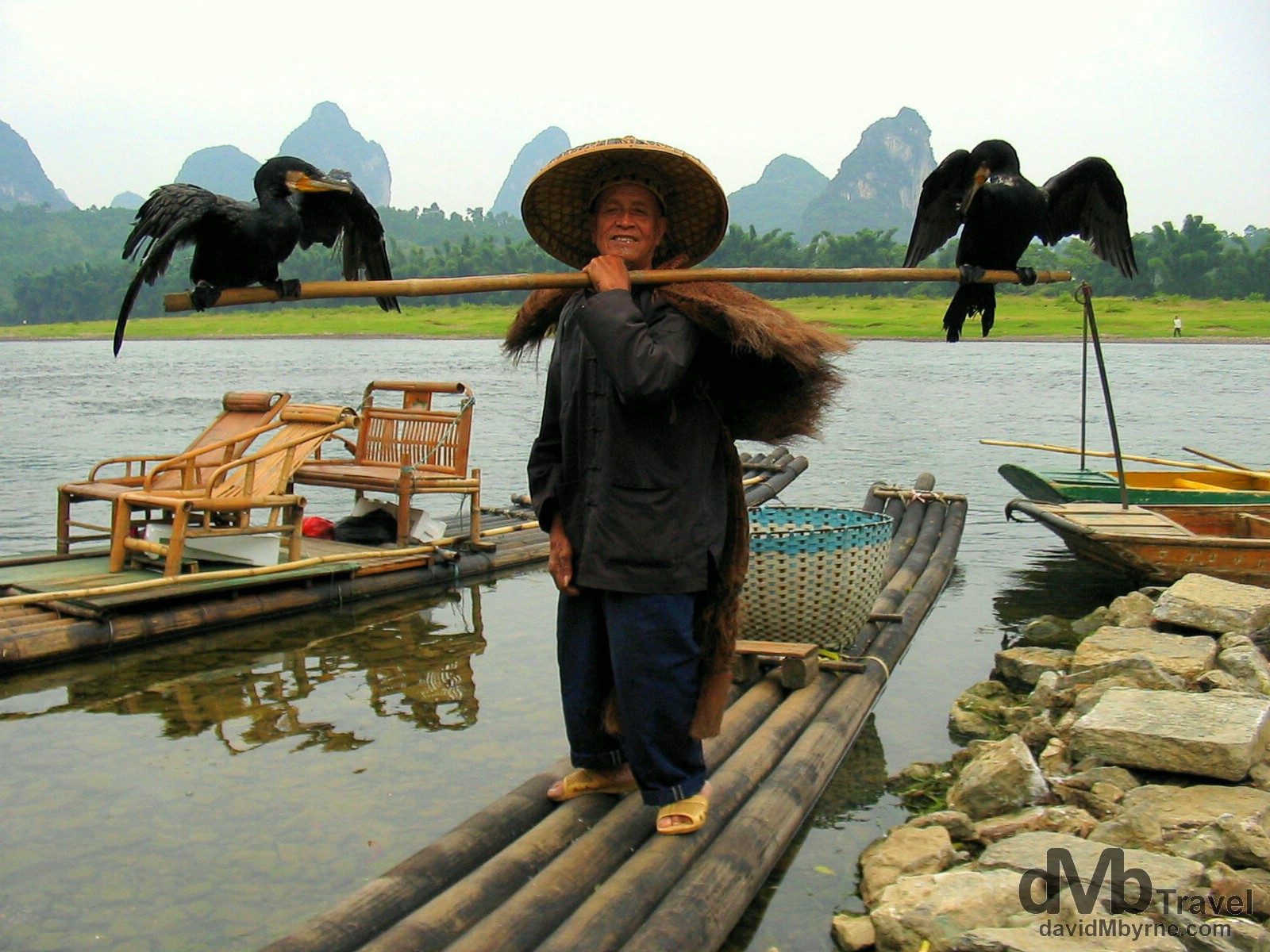 A Cormorant fisherman poses for a picture by the banks of the Li river in Yangshuo, a pose he charged me RMB5 for (€0.50). Although it’s a dying tradition a small few do still make a living from cormorant fishing in this part of the world. The cormorants are trained at an early age to dive from the fisherman’s bamboo raft into the water, scoop fish with their beaks and return to the surface to deposit the catch in the onboard basket. They are prevented from swallowing the fish by ties around their throat but it’s customary practice for the fisherman to loosen the ties and allow the birds to consume every 7th fish – apparently they refuse to work otherwise. I took nighttime trip on the Li River to see them in action and it was quite the experience. By the Li River in Yangshuo, Guangxi Province, southern China. September 10, 2004.

Moving On
And that was Yangshuo. One day turned into two, two turned into three, and eventually Yangshou got five days & nights of my time. That gave me ample time to decide where I would be going next, and with that decision made I got the bus back to Guilin from where I began my attempt to get up into the hills and spend some more time taking it easy, this time in the minority village of Ping An high among the extreme terracing of the Longsheng Rice Terraces, a.ka. the Dragon’s Backbone Rice Terraces.