High In The Heartland Of The Zhuang Minority People, Some Of The Most Extensive & Extreme Stepped Terraces in Asia

“… every cloud has a silver lining, or two silver linings in this case, as I was reacquainted with my essentials & I got to spend one more night of solitude among the the extreme stepped rice terraces of the Longji Mountains.”

Ping An (pronounced ‘p-ann‘) is a minority village of the Zhuang people in the hills of the Longji Mountains in Guangxi province, southern China. Location for the stunning Longsheng Rice Terraces, it’s both quiet & quite a bit out of the way, but I’d imagine it’s also the sort of place that very few leaving would not have a desire to return to some day in the future. I did, although my wish for a second visit came true sooner than I expected. I originally left these idyllic hills yesterday, when I took the 40-minute bus along the windy, river-skirting road from Ping An to Longsheng, followed by another 2-hour bus from Longsheng to Guilin. It was in Guilin, while standing in the CITS office attempting to buy an onward overnight sleeper bus ticket for the 400-kilometre trip north to Guiyang in Guizhou province, that I realised I had left my essentials – passport, money, cards – in my room in the Countryside Cafe & Inn in Ping An, somewhere I had called home for the previous 2 nights. So after 3 (more) hours – time split between sitting on a bus from Guilin to Longsheng & perched on the back of a chartered motorcycle from Longsheng to Ping An, as the buses had ceased running the route for the night – I found myself back in Ping An some 8 hours after attempting to leave it for the first time. But every cloud has a silver lining, or two silver linings in this case, as I was reacquainted with my essentials & I got to spend one more night of solitude among the hills & the extreme stepped rice terraces of the Longji mountains. 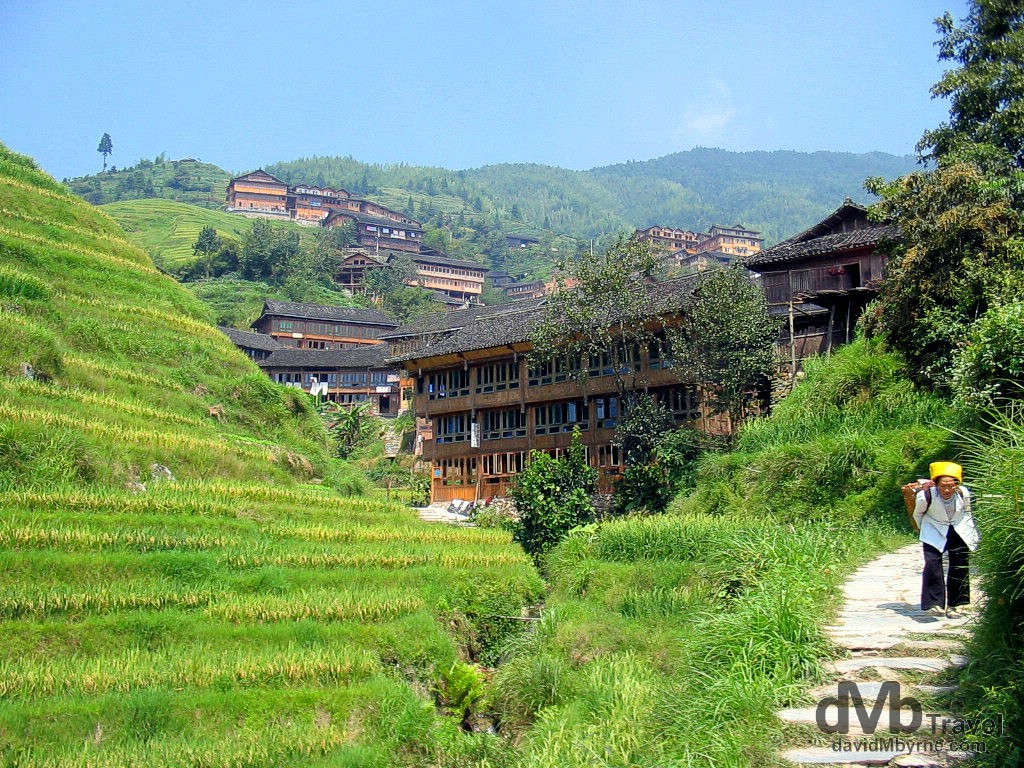 Ping An Zhuang Minority Village & The Zhuang
Ping An is high in the hills of the Longji mountains, the heartland of the Zhuang nationality, a minority people who work the land like they have done for centuries. The 13 million-strong Zhuang are largely assimilated into the ways of the Han Chinese (who make up 92% of the 1.3 billion Chinese population) but they have their own distinctive features – the Zhuang ladies, for example, wear distinctive, embroidered clothing and they all boast extraordinary long black hair that is either tied up with a headscarf or affixed in a bowl-like bun. 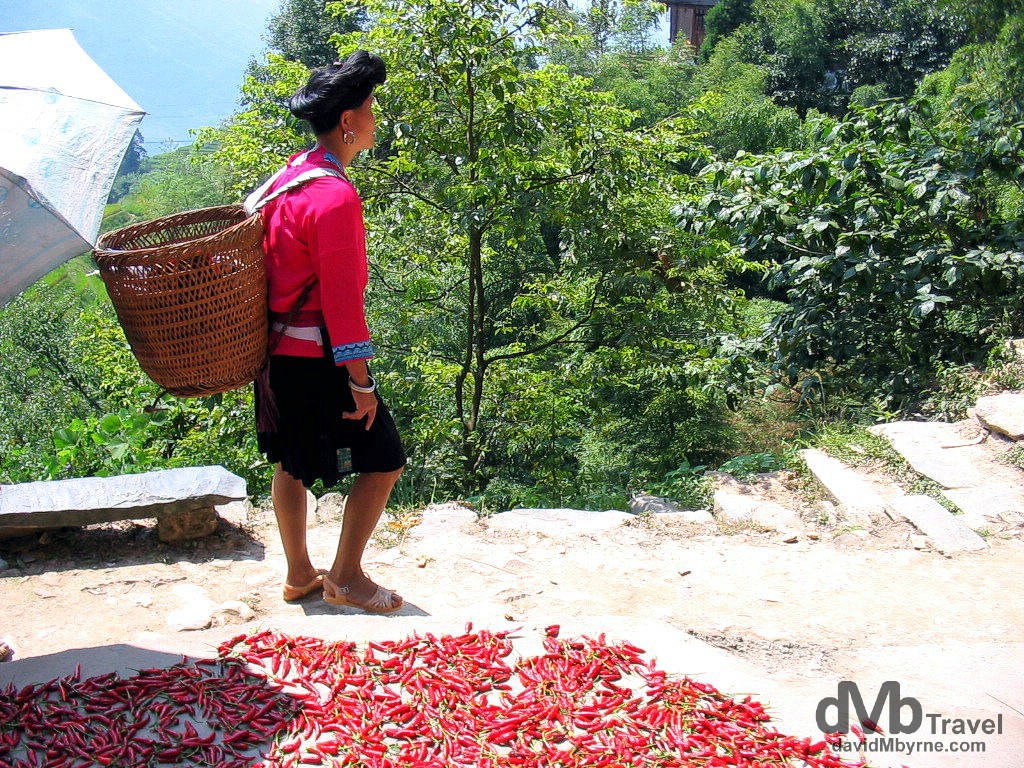 A Zhuang lady in Ping An village. All the females wear either dark blue embroidered trousers, black embroidered skirts and white or red tops. The basket seemed to be used for carting produce around the (very) steep lanes of the village, mainly chillies. Ping An Zhuang minority village, Longji Mountains, Guangxi province, China. September 16, 2004.

The Surrounds
As colourful & distinctive as the locals in Ping An Zhuang minority village are, and they are, it’s the setting of the village & the scenery surrounding it that is the real highlight of a trip to this remote part of China – the surrounding hills are ridged with the some of the most extraordinarily extreme rice terracing to be found in not only China but in all of Asia. The steep-sided and closely packed hills have been carved, over centuries of backbreaking effort, to resemble the literal form of a contour map. The terraces were constructed by the Zhuang to make their mountainous land arable with construction beginning during the Yuan Dynasty (1271-1368) and lasting over 400 years. Today the Longsheng Rice Terraces, also known as the Dragon’s Backbone Rice Terraces, cover over 16,000 acres.

The vistas from the hills above Ping An village are special. Getting up close to the stepped terraces one can really appreciate the ingenious flooding & drainage systems, essential to good rice growing, installed on every terrace. Overlooking Ping An Zhuang minority village, Longji Mountains, Guangxi Province, southern China. September 16, 2004.

Passing Time
I passed the time in the hills surrounding Ping An doing nothing more than waking in the hills, taking in the views, walking in the hills some more, hanging around the village & interacting with the local children, eating in the local restaurants, walking again, taking in more views, updating my diary, reading, and sleeping. There is a tourist infrastructure here but as of September 2004 it is still very much in its infancy and thus never gets in the way of the scenery, & nor does it disrupt the solitude. With numerous locals offering cheap beds in clean, comfortable & spacious wooden village houses, each one with a guaranteed stunning view of the surrounding landscape, there’s not too much to dislike about Ping An. Here’s hoping it stays that way. 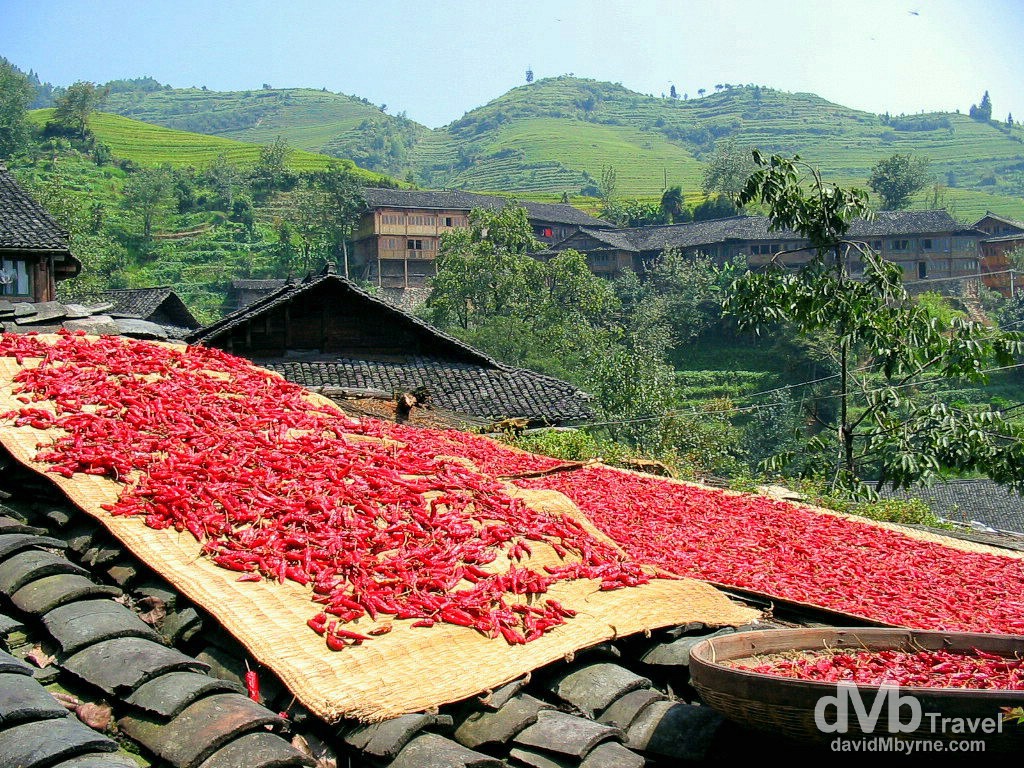 Chillies out to dry in the midday sun. This is a common sight all over the village – chillies are a major part of the diet in this area of China. Ping An Zhuang minority village, Longji Mountains, Guangxi province, southern China. September 15th 2004 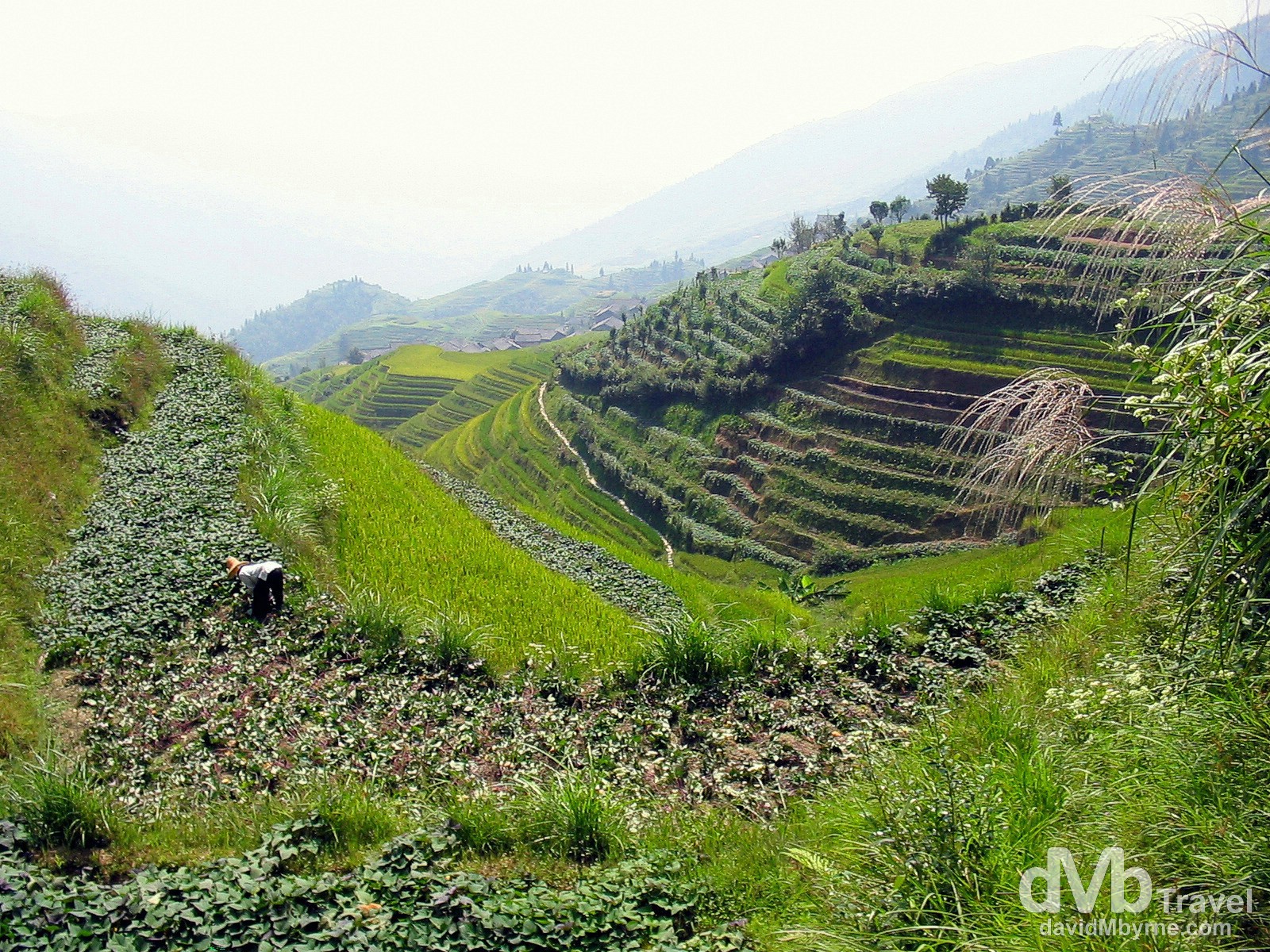 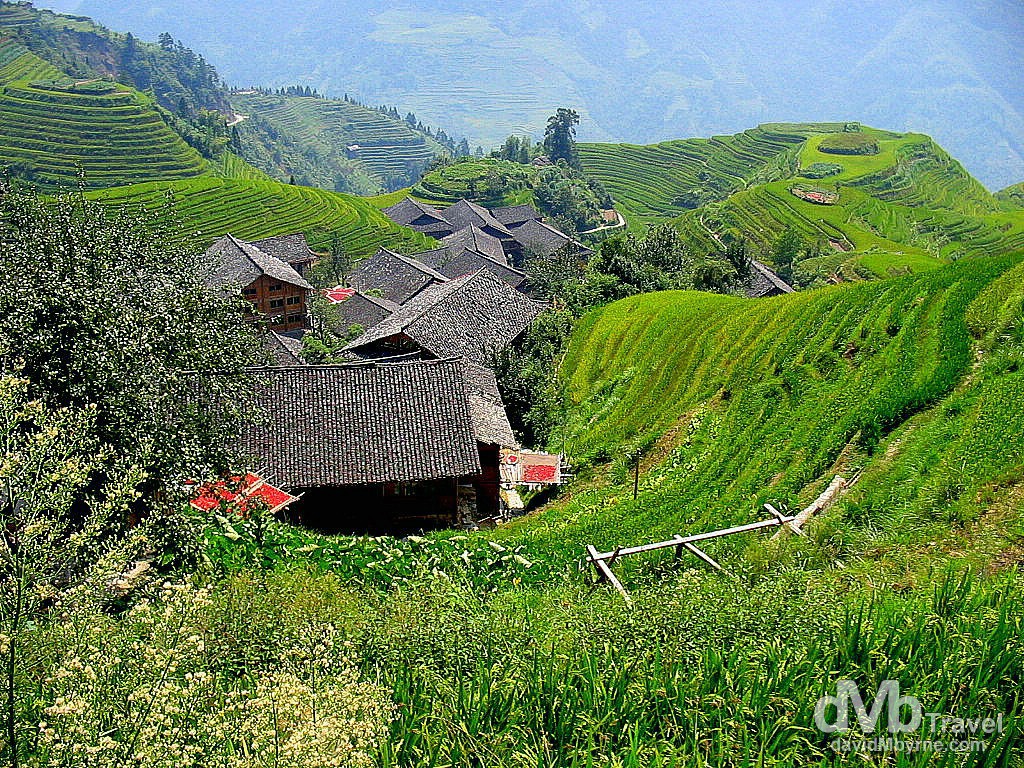 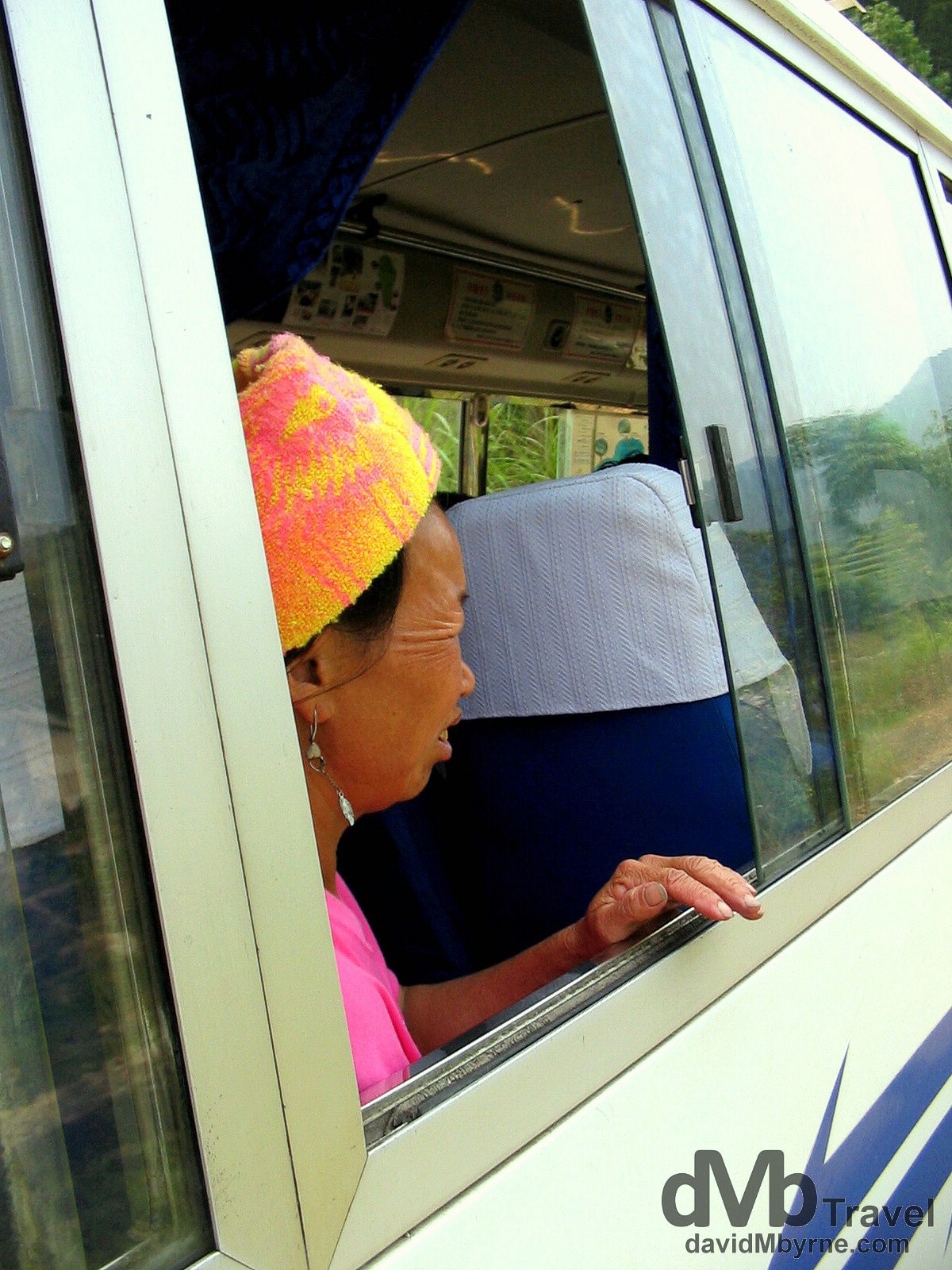 Riding the bus on the windy roads from from Ping An Zhuang minority village to Longshang. Captured yesterday, on my first, failed attempted to leave Ping An. Guangxi Province, southern China. September 16, 2004.

Moving On
A second and successful attempt to leave Ping An ultimately got me to Leshan Giant Buddha, via the cities of Chongqing and Guiyang. And what an interesting & bruising journey that was.