The Calming, UNESCO-Listed Largest Buddhist Structure In The World

“He sits with his hands on his knees looming over ships that pass beneath and when seen from the water is really an impressive sight.”

Dafo, a.k.a. the Leshan Giant Buddha, is a large red sandstone Buddha that has been carved out of a cliff face at the confluence of the Minjiang, Dadu and Qingyi rivers, just outside Leshan in Sichuan province, Central China. Make no mistake, it’s a bit out of the way and it took some effort to get here, but Dafo was worth it. 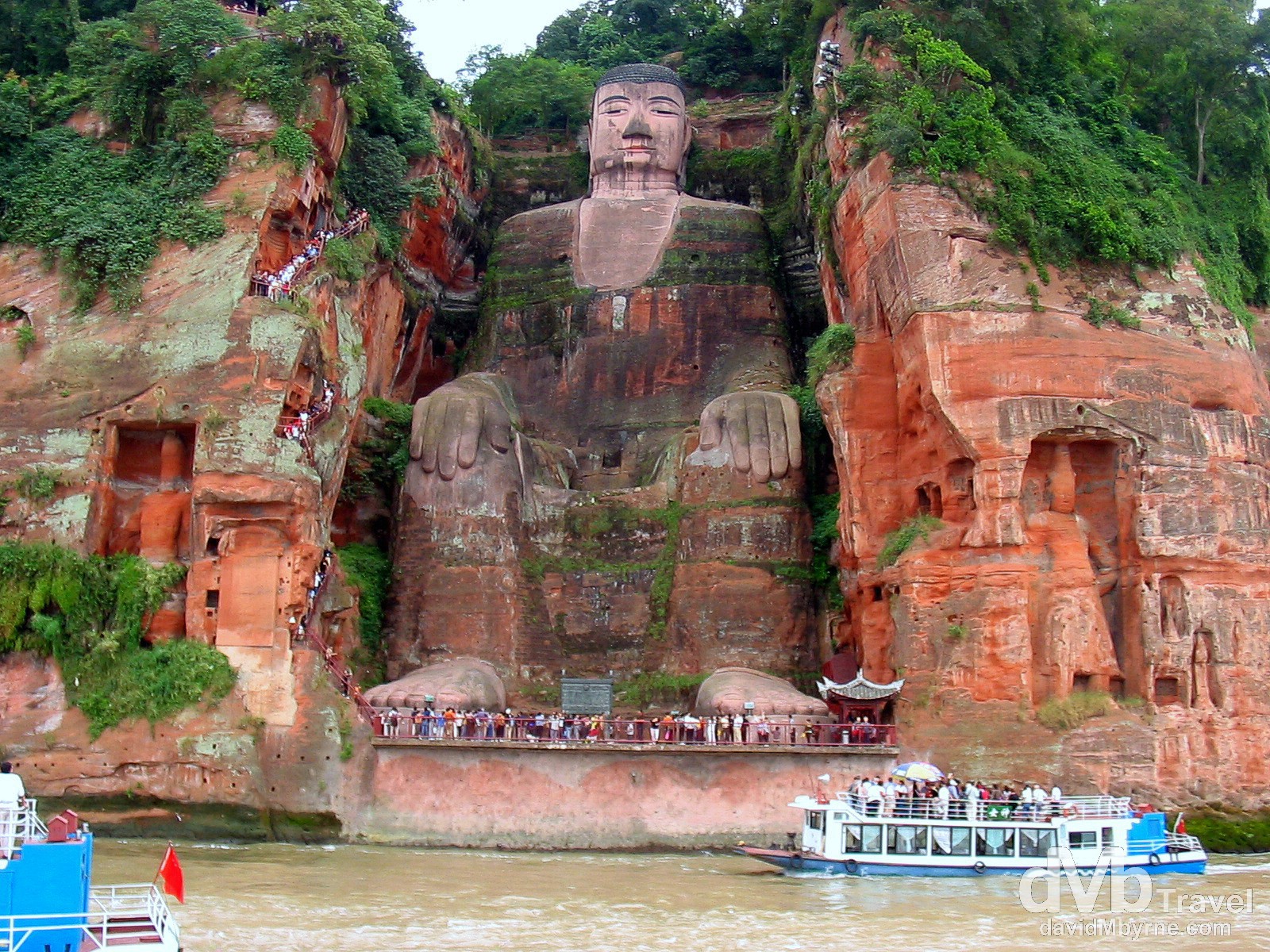 UNESCO World Heritage-listed Dafo, the Leshan Giant Buddha, as seen from the confluence of the Minjiang, Dadu & Qingyi Rivers that he protects just outside Leshan (

The first Buddhist temple in China was built here in Sichuan Province in the 1st century A.D. in the beautiful surroundings of the summit Mount Emei. The addition of other temples turned the site into one of Buddhism’s holiest sites. Over the centuries, the cultural treasures grew in number. The most remarkable is the Giant Buddha of Leshan, carved out of a hillside in the 8th century and looking down on the confluence of three rivers. At 71 m high, it is the largest Buddha in the world. Mount Emei is also notable for its exceptionally diverse vegetation, ranging from subtropical to subalpine pine forests. Some of the trees there are more than 1,000 years old.

Dafo || The (Calming) Giant Buddha
Dafo is pretty imposing. He’s 71 metres tall, his shoulders are 28 metres wide and his smallest toenail is large enough to easily accommodate a seated adult. It’s therefore not surprising that he’s the largest Buddhist structure in the world. Oh & he’s also old. Construction was started in 713 AD, led by a Chinese monk named Haitong. When funding for the project was threatened, he is said to have gouged out his own eyes to show his piety and sincerity. Construction was completed by his disciples some ninety years later. Haitong hoped that the Buddha would calm the turbulent waters that plagued the shipping vessels travelling down the river, a hope that was somewhat realised by the massive amounts of rock that were deposited from the cliff during the construction phase – seemingly it calmed and altered the rivers currents sufficiently enough to improve the safety for passing boats. 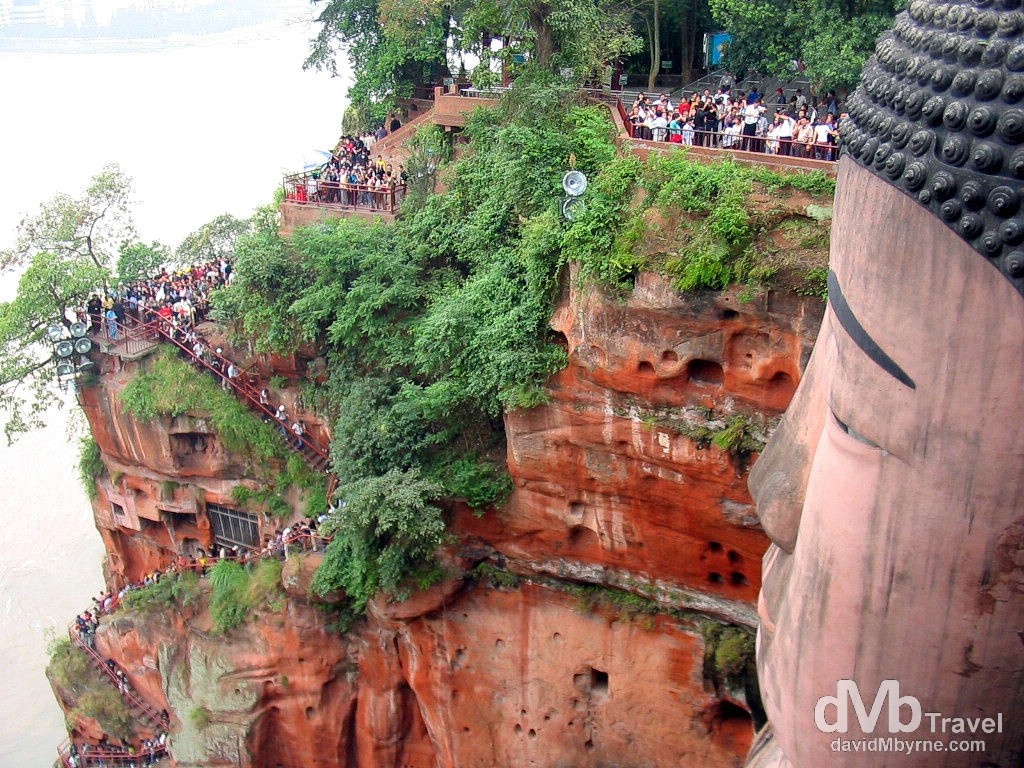 This picture is captured from the viewing platform on the lookout around Dafo’s head. It shows the hordes of tourists following the path to get down to Dafo’s feet. It’s an exercise in patience snaking your way down that walkway, especially when you get to the viewing platform opposite Dafo’s shoulders (notice the crowds of people to the left) where everyone halts for the customary picture with Dafo in the background. At the Leshan Giant Buddha, Leshan, Sichuan Province, China. September 20, 2004.

Dafo, along with the nearby Mount Emei Scenic Area, is a UNESCO World Heritage Site, an honour bestowed upon him in 1996. He sits with his hands on his knees looming over ships that pass beneath and when seen from the water is really an impressive sight. It’s also a much more relaxing place to view the structure. The hordes of tourists swarming around the cramped viewing platform areas and clambering over Dafo’s toes does make visiting a slightly frustrating experience. Word of warning – bring your patience with you, or limit your time at Dafo himself to a minimum. There are plenty of escapes in the surrounding hills, in the Leshan Giant Buddha Scenic Area, including a few peaceful Buddhist monasteries. 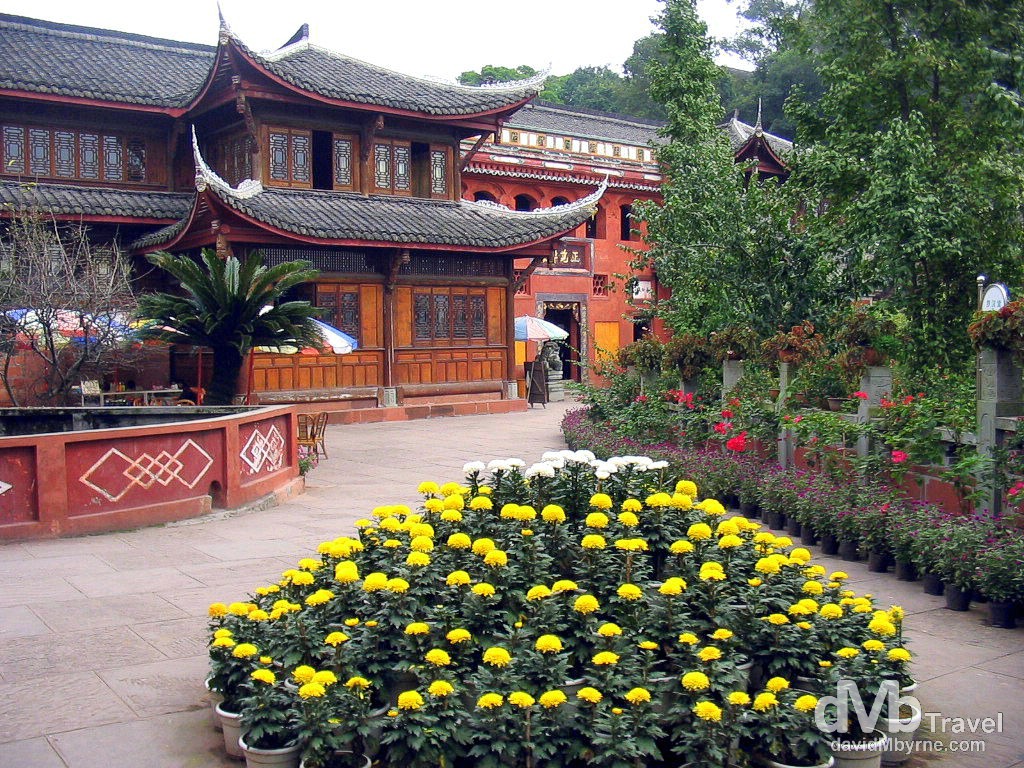 The grounds of a monastery in the Leshan Giant Buddha Scenic Area. The area surrounding The Leshan Giant Buddha offers a nice contrast to the frantic scene in and around Dafo himself and once I had escaped the crowds I spent a while taking a look around the various Buddhist monasteries and temples dotted around the area. China is officially an atheist country but its 3 main religions are Buddhism, Taoism and Confucianism, with the later two generally being classed as beliefs rather than religions. Therefore, & as a general rule of thumb, the majority of temples encountered across China will be Buddhist temples. Leshan Giant Buddha Scenic Area, Leshan, Sichuan province, China. September 20, 2004.

Moving On
Time to get high, and spend the night in a monastery, on UNESCO-listed Emei Shan, one of China’s four Sacred Buddhist Mountains.