A Snoozer On A Bruiser

“I couldn’t believe she slept at all, but she did. Hardy folk, these Chinese.”

I‘m sure glad to finally get here, here being Leshan in Sichuan Province, Central China. I finally got to a hotel, finally got to have a shower and finally got to sleep in a stable bed. I’ve pretty much been on the move ever since leaving Ping An Zhuang Minority Village, about 1,300 kilometres southeast of here in Guangxi Province, a little over 2 days ago now. To get here I’ve had to endure an overnight bus trip from Guilin to Guiyang on which I barely slept (overnight buses in China do not come recommended); I had to kill 12 hours in Guiyang while being the object of intense curiosity to the locals – 4 weeks into my loop of China and it’s the first time I’ve been incessantly started at; followed by a another overnight trip, this one by train, from Guiyang to Chongqing. And once I got there I was still 5 hours shy of my destination of Leshan. Or so I was led to believe. Five hours turned into eight, eight bumpy, dusty, stuffy hours, hours spent on a has-seen-much-better-days bus sharing the well-worn back row with 3 elderly Chinese ladies, one of which used me as a pillow for most of the journey. I couldn’t believe she slept at all, but she did. Hardy folk, these Chinese. 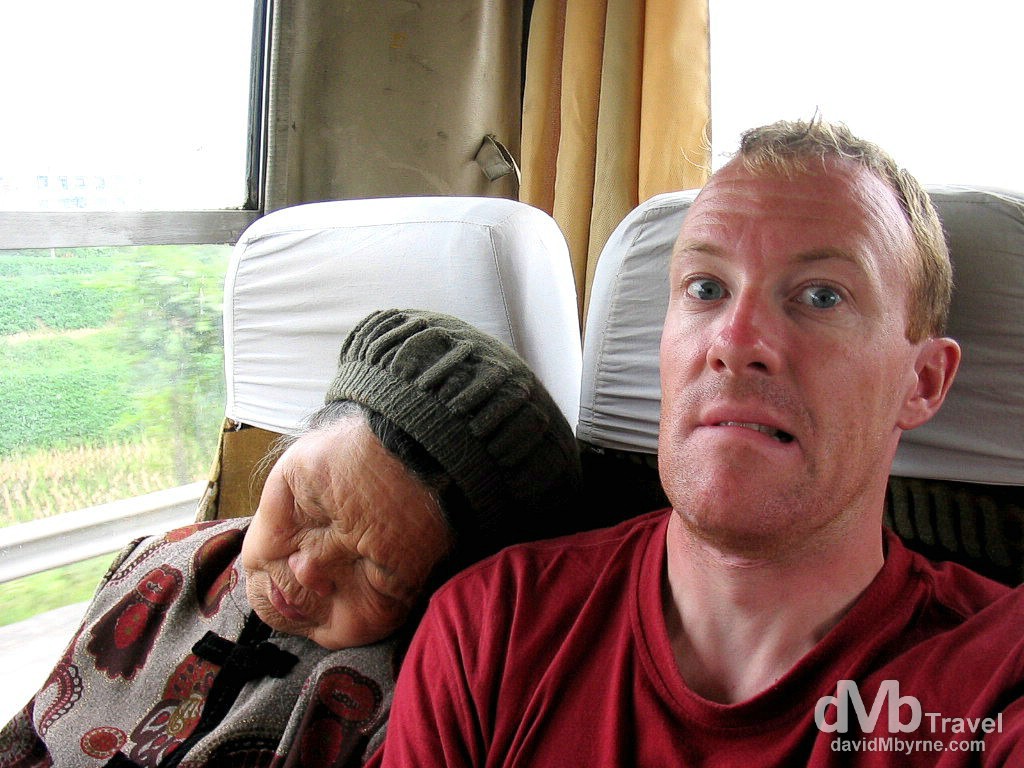 A snoozer on a bruiser. This supposed 5-hour trip turned into an 8-hour, butt-numbing test of endurance, an unexpected test of endurance given the fact that I’ve been very impressed with the toll-heavy 2 or 3-lane highways I’d travelled on in China up to this point. En route from Chongqing to Leshan, central China. September 19, 2004.

Moving On
Getting up close & personal with Dafo, the Leshan Giant Buddha.