“I spent a bit of time at the summit attempting to appreciate the views, if not adequately photograph them, and cursing all those high heel-wearing day trippers I saw getting off the cable car. Oh China.”

EmeiShan (Emei mountain) in Sichuan Province, Central China, only an hour bus ride from nearby Leshan, is a holy mountain, one of the Four Sacred Buddhist Mountains of China , the others being Wutai Shan, Jiuhua Shan, & Putuo Shan. EmeiShan is the tallest of the four with its Golden Summit topping out at 3,099 metres (10,167 feet). It’s a heaviest of heavy hitters in the Chinese Buddhist world – it is the place where Buddhism first became established on Chinese territory and from where it spread widely through the East. As such, UNESCO bestowed World Heritage Site status upon it in 1996.

The first Buddhist temple in China was built here in Sichuan Province in the 1st century A.D. in the beautiful surroundings of the summit Mount Emei. The addition of other temples turned the site into one of Buddhism’s holiest sites. Over the centuries, the cultural treasures grew in number. The most remarkable is the Giant Buddha of Leshan, carved out of a hillside in the 8th century and looking down on the confluence of three rivers. At 71 m high, it is the largest Buddha in the world. Mount Emei is also notable for its exceptionally diverse vegetation, ranging from subtropical to subalpine pine forests. Some of the trees there are more than 1,000 years old.

EmeiShan Summit Options || The Easy & The Normal Way
Needless to say EmeiShan is a place of pilgrimage, and has been for over 1,800 years. No doubt back then there were a greater percentage of genuine pilgrims on the mountain, but today tourists far outnumber pilgrims and, among all the holy symbolism, the mountain is a bit of a tourist trap, especially when you consider there is a road and cable car available to take you right to the top in air-conditioned comfort.

If you do decide, like me, to get to the summit under your own steam then you’ll be subjecting yourself to two long, hard days of uphill walking, the vast majority of it via a seemingly never ending series of stone stairways (& when you’re ascending those stairways please spare a thought for those who paved the way for you). There are plenty of rest stops en route, nice scenery (it’s not called the Mount Emei Scenic Area for nothing) and, of course, Buddhist monasteries and temples which, apart from housing Monks, offer accommodation for weary trekkers. To hinder your progress there are the aforementioned stairways (yes, they both assist & hinder you), greedy, somewhat aggressive monkeys and the likelihood of cramp, fatigue, and dehydration. But let’s not be a Negative Nancy here as it – the walk to the summit – is an awesome experience. 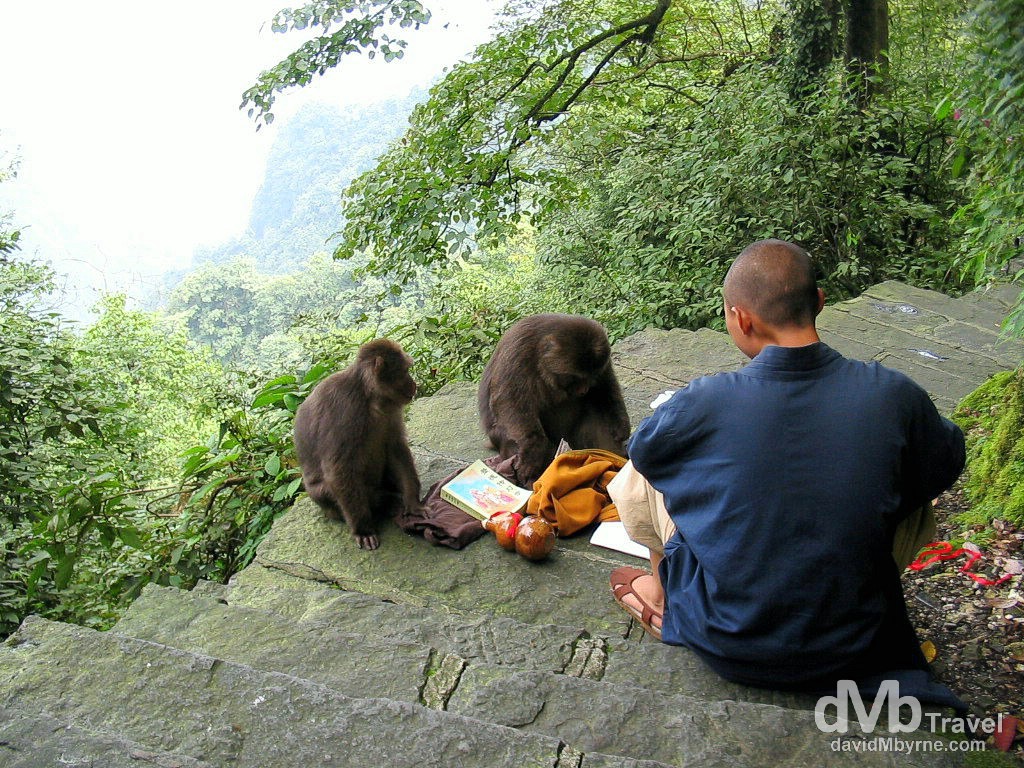 A monk succumbs to pressure for food from monkeys on the hike up EmeiShan. Monkeys are a common sight on EmeiShan, prowling the paths up and down the mountain. They have a bad reputation for getting aggressive where food is concerned. One of the first things you are requested not to do when buying your pass for the mountain (no, it’s not free) is to feed the monkeys – don’t offer them food, keep your bags closed around them and bring a stick with you in case of an encounter with an over aggressive primate. Here a Monk has no choice but to allow these two monkeys free reign over the contents of his bag as they had already secured a firm grip on it & there was no way they were letting go. I passed these two a few minutes earlier but with my bag on my back and armed with a stick they thought better of trying anything on with me. But the poor Monk, with his simple, linen bag hanging below his waist, didn’t stand a chance. EmeiShan (

The Walk || The Ascent
For my walk I based myself at base camp, otherwise known as Emei Town, a touristy, one-street, blink-&-you’ll-miss-it town at the foot of the mountain, although still a 30 minute drive from the summit (windy roads). It was built for no other reason than to accommodate tourists and all roads to the top of the mountain go through the town. I spent the night before and after the climb in the Teddy Bear Guesthouse, the closest Emei Town has to a hostel. I was amused reading the numerous travellers’ notes scribbled on the guesthouse walls warning how “difficult” the climb is, how “you might not finish”, and how if you struggle you could always “get the porters to carry you some of the way” – reading the guesthouse graffiti was especially humorous having returned from the summit. Yes, it’s a taxing 2 day climb (or at least – howdy tiger – it should be) & at times the steps never seem to end, but if you have even a moderate level of fitness, not to mention just a hint more stamina, then it’s not going to be a problem for you, whatever route you choose (there are a few choices). You’ll enjoy it and your highlight will most likely be your stay in one of the monasteries en route, even more so than the views from the summit. It was for me. 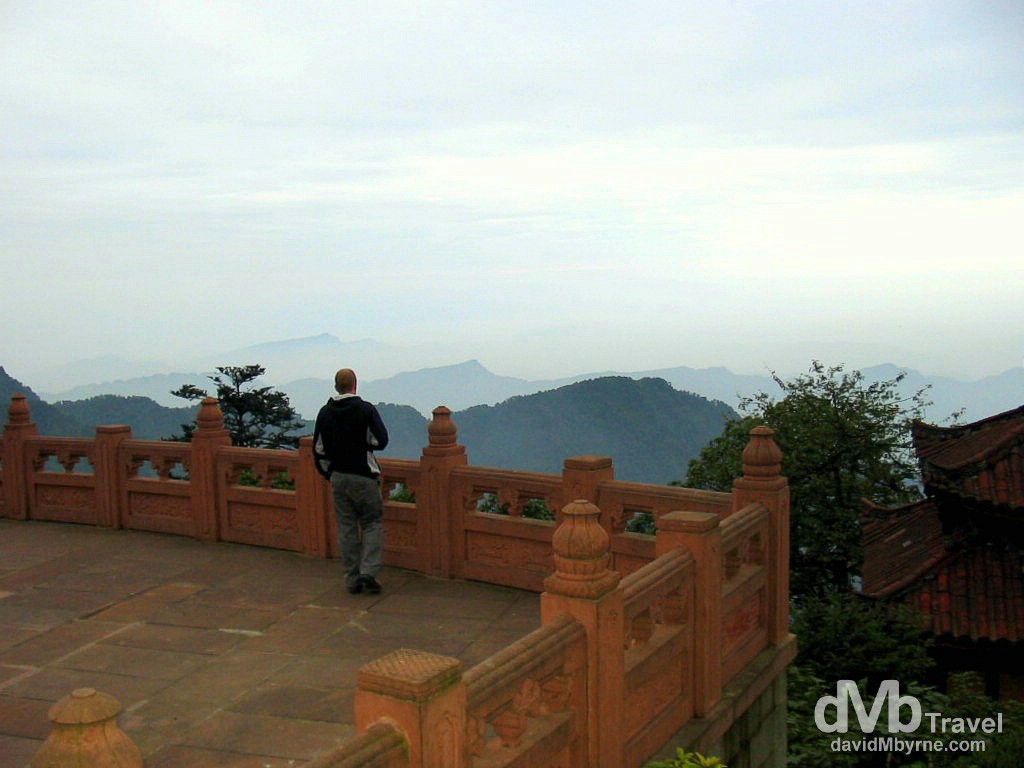 On the forecourt balcony of Xixiang Temple & Monastery, where I spent my first and only night on EmeiShan. The monastery is located about 15 kilometres (about two-thirds) up the mountain and it’s probably the last monastery offering accommodation before the summit. I had passed 2 or 3 monasteries earlier in the climb, one of which I had planned on staying at for the night but as I was making good time I pressed on – making good time or not, it was still a strenuous 6-hour walk to get here. The views were top notch and even here I seemed to be above the clouds and higher than most of the surrounding peaks in the distance. I passed a very relaxing evening here. There wasn’t much to do. Actually, there was nothing to do, a large part of the attraction. Activities, for want of a better word, were limited to watching the monks playing badminton or Ping-Pong on the monastery forecourt & listening to their rhythmic chants during daily pray rituals. Xixiang Temple and Monastery, EmeiShan, Sichuan Province, China. September 21, 2004. 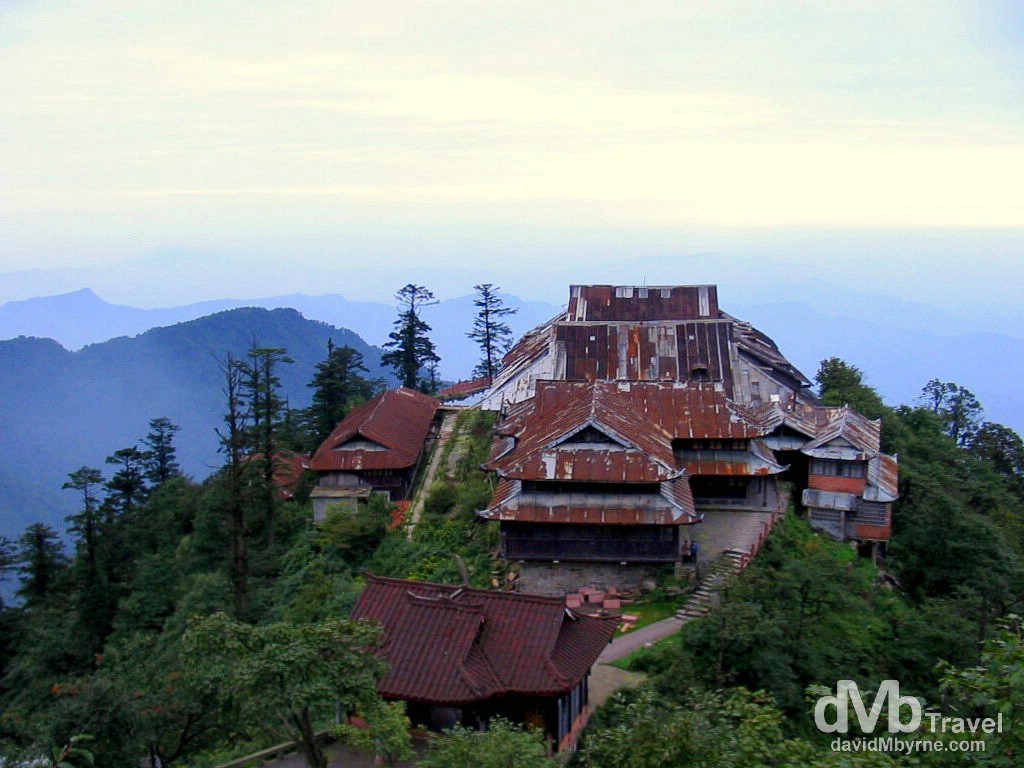 Xixiang Temple & Monastery as seen from the hill behind the monastery. This picture was taken about 6:30pm, by which time I had been at the monastery about 2 hours. I was now bored. It was an early night, ahead of another 3 or 4 hour uphill walk to reach the summit in the morning. EmeiShan, Sichuan Province, China. September 21, 2004. 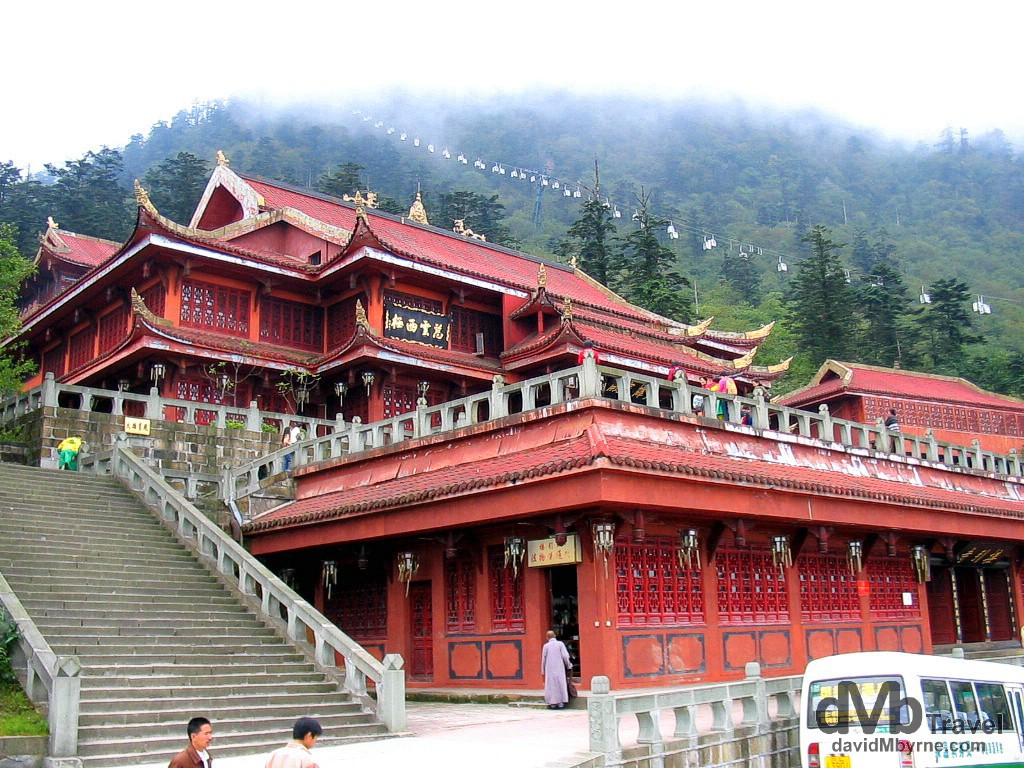 Jieyin Hall, a short distance from the summit of EmeiShan & at the end of the windy mountain road from Emei Town. It is here all those who choose to be ferried up the mountain get deposited so they can embark on the strenuous stroll across the road to the summit cable car, seen in the distance as is the summit itself shrouded in cloud. EmeiShan, Sichuan Province, China. September 22, 2004, 2004.

The Summit
Unfortunately when I arrived at EmeiShan’s Golden Summit the views, midst the clouds at 3,099 metres (10,167 feet), were not great, not to mention the fact that the iconic Golden Summit Temple itself was off-limits, surrounded as it was by an ugly skin of scaffolding. All that said, my position relative to the surrounding landscape was obvious – I was obviously very high up & could intermittently see far-off peaks, albeit for very brief glimpses. However, the sea of white nothingness enveloping me was just that – an all encompassing sea of white nothingness. I spent a bit of time at the summit attempting to appreciate the views, if not adequately photograph them, and cursing all those high heel-wearing day trippers I saw getting off the cable car. Oh China. Once I had had my fill of those two summit must-dos I started the descent back down to Emei Town which in total took about 2 hours of downhill walking – needless to say it was so much easier & quicker than the ascent, but oh my poor knees. Back at the Teddy Bear Guesthouse I couldn’t help but reread the warnings by previous EmeiShan conquerors.

“You can always get the porters to carry you some of the way.”

Oh my. Some people.

Moving On
It’s time to go ogle at some cute pandas at the Giant Panda Breeding Centre in Chengdu.