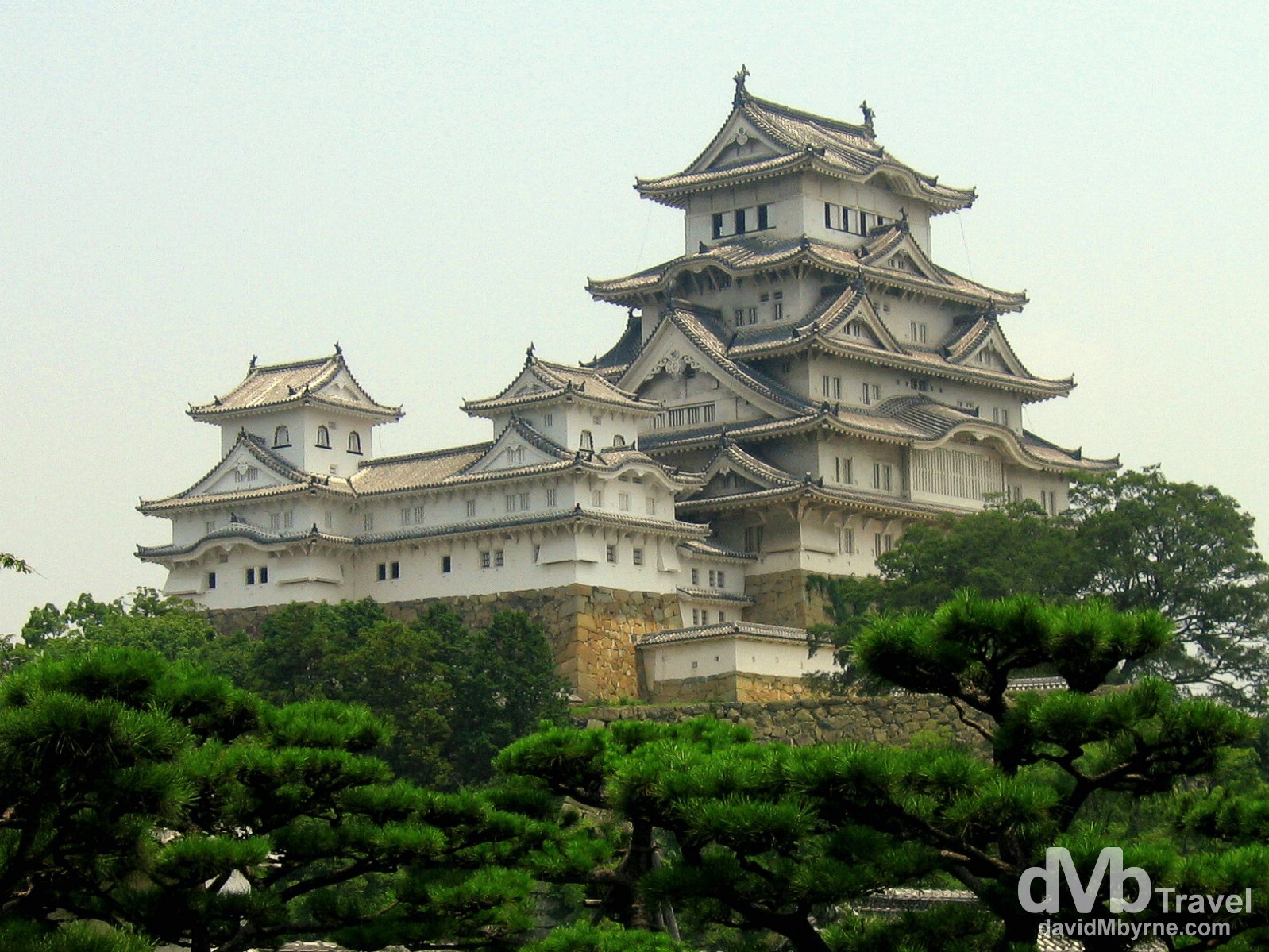 The city of Himeji in the Kansai region of Japan is some 55 kilometres west of Kobe, conveniently located on the bullet train line enabling me to stop off en route to Hiroshima, my final stop on this my first visit to Japan. Although it has a few temples of note, especially the Engyo-ji Temple, it is better know as a castle town, being home to stunning UNESCO World Heritage listed Himeji Castle, Himeji-jo, the oldest & finest surviving structure from medieval Japan and the largest & most visited castle in the country.

Himeji Castle as seen from the western bailey of the castle complex. The castle is a masterpiece of wooden construction & the finest surviving example of early 17th-century Japanese castle architecture, preserving as it does all its significant features intact. While containing many of the defensive and architectural features most associated with Japanese castles – the tall stone foundations, whitewash walls, and the organization of the buildings within the complex – the site also features many other examples of typical castle design, including gun emplacements and stone-dropping holes. The present complex of moats, thick defensive walls, keeps and connecting corridors dates from the early seventeenth century, although there has been a fortress in the city, population of over 500,000, since around 1346. It was rebuilt in 1600 during a time of peace, meaning the addition of the central five-storey keep at that time was probably done for solely visual reasons, not defensive. The town of Himeji suffered extensive damage during World War II bombings but given it’s size & prominent position the castle miraculously went undamaged. It was added to UNESCO’s World Heritage list in 1993. Himeji ( 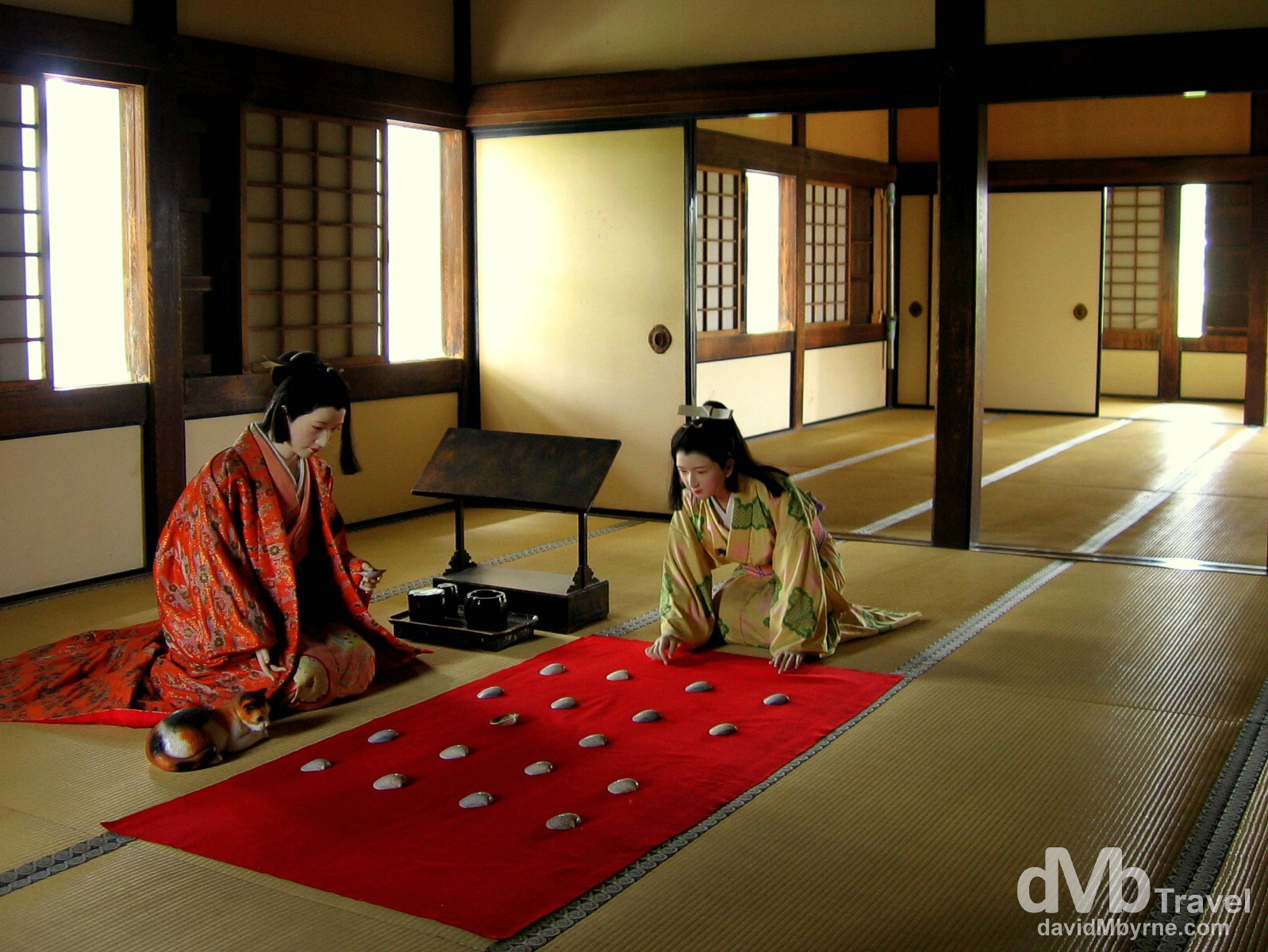 A reenactment of royal life in Himeji Castle. The castle is in impeccable condition and displays like this really helped convey how life would have been like for the castle royalty. While touring the castle it becomes plainly obvious that it would have been a tough place to get into all those years ago as the castle incorporates many cunning, and not so cunning, defensive features; I passed through gates and past turrets & walls from which defending soldiers fired arrows, shot muskets and dropped stones & boiling liquids. Himeji, Honshu, Japan. July 22nd 2005. 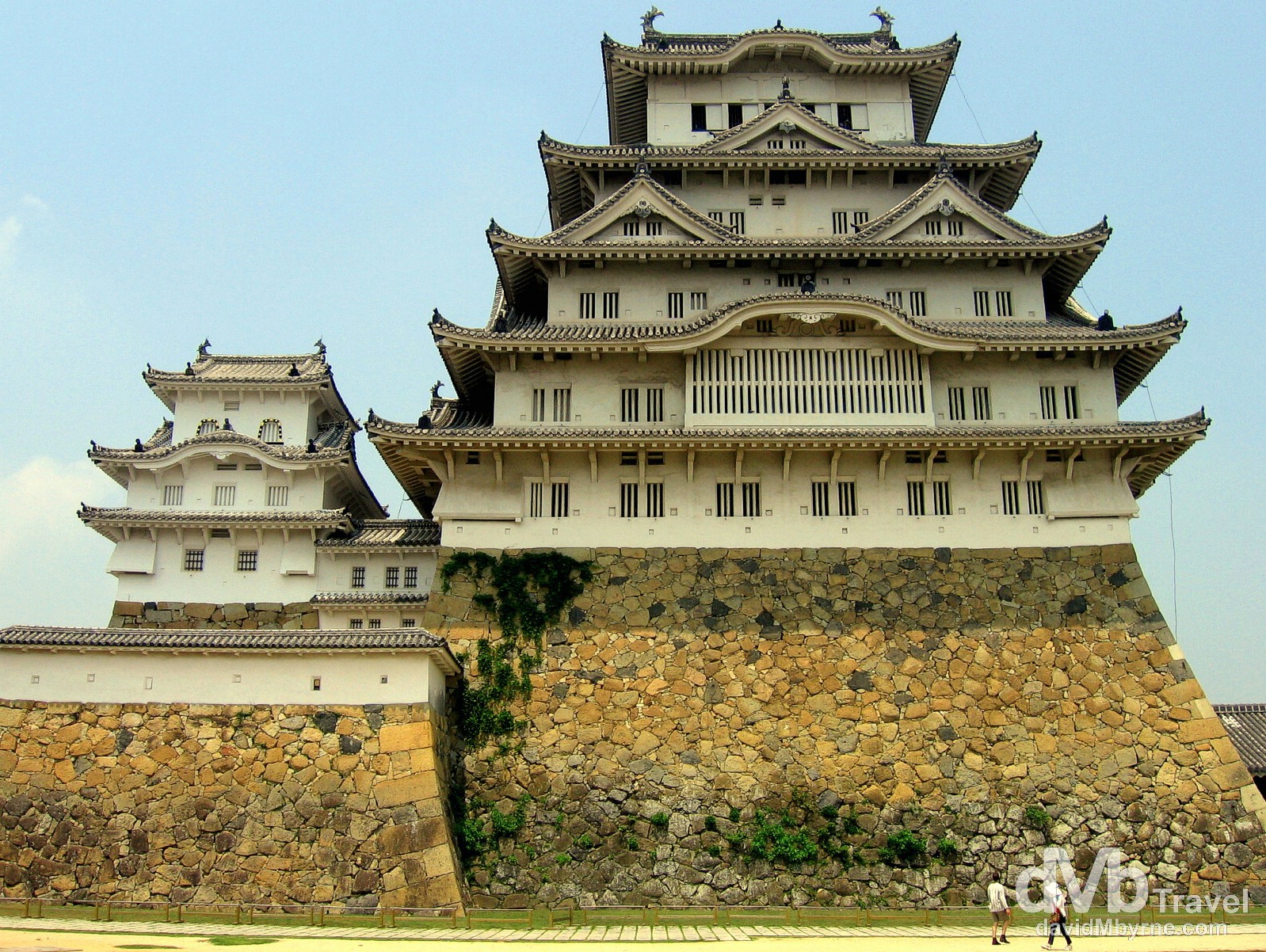 Fronting the main keep of Himeji Castle, a structure you’ve probably seen before – the fortress made the memorable backdrop to the Bond adventure ‘You Only Live Twice’, as well as countless feudal-era dramas and the recent Tom Cruise film ‘The Last Samurai’, part of which was filmed in the city. One of the castles most important defensive elements, and perhaps its most famous, is the confusing maze of paths leading to the castles highlight, its main keep (dates from 1601). The gates, baileys, and outer walls of the complex are organized so as to cause an approaching force to travel in a spiral pattern around the castle on their way into the keep, facing many dead ends. This allowed the intruders to be watched and fired upon from the keep during their entire approach. However, the castle was never attacked in this manner and so the system remains untested. These days finding your way around the castle is no problem since the route is clearly marked and there are English explanations on plaques at many points of interest. But as mentioned previously the highlight of the castle is the inner citadel which is dominated by the magnificent central keep (donlon), Daiteu-hu. There are six levels within the dark and chilly keep, supported by a framework of huge wooden pillars, one of which is made from a 780-year-old cypress tree; touch it and it’s said you’ll have long life. On the top level, where the lord and his family would commit suicide if the castle was captured (which it never was), you can now look out across the city of Himeji. Himeji, Honshu, Japan. July 21st, 2005. 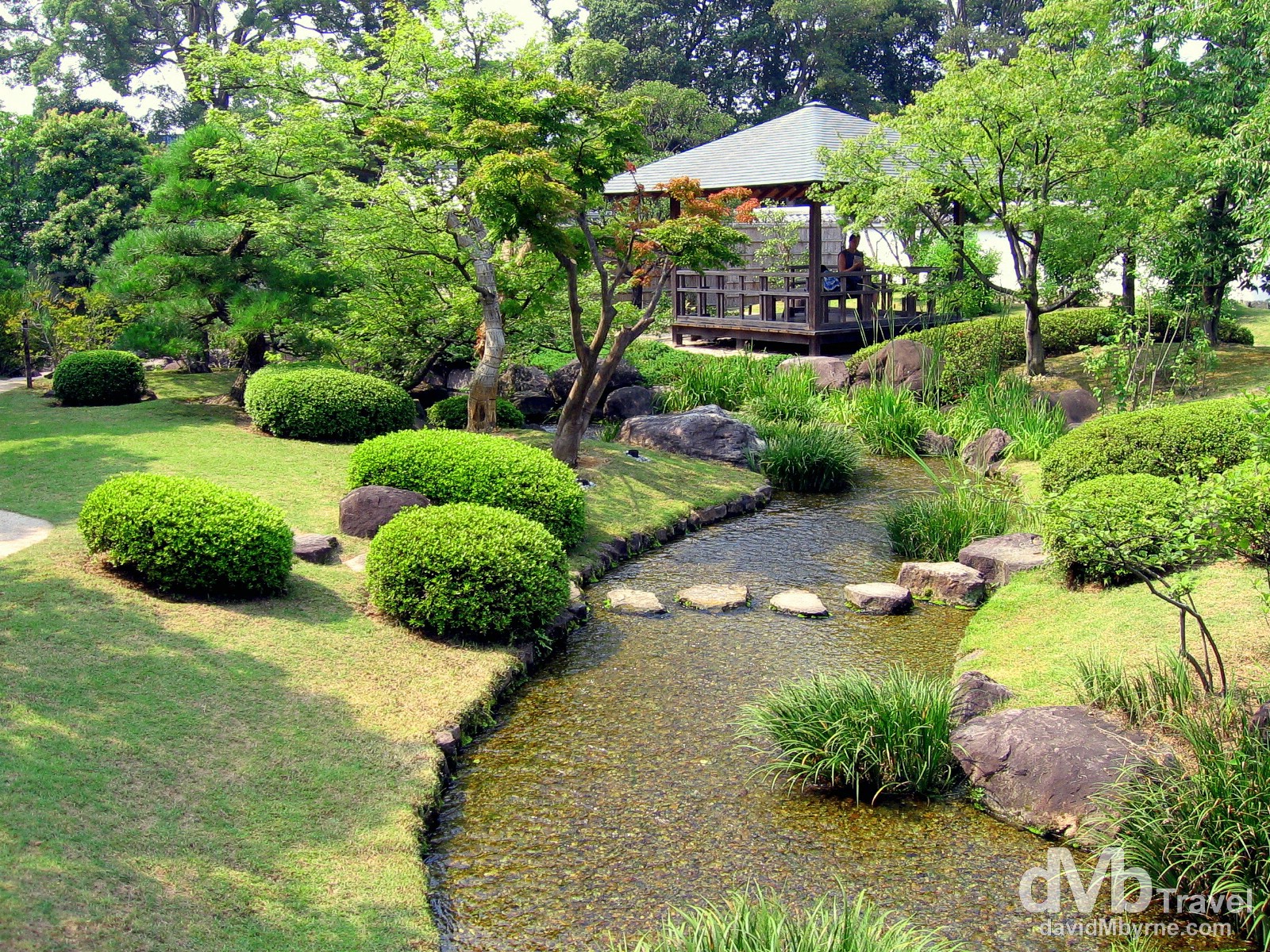 After having a snoop around the castle you can hop over the moat on the castle’s eastern side to relax in the lovely Himeji Koko-en Gardens, 9 linked, traditional style Japanese gardens constructed as recently as 1992 to commemorate Himeji City’s 100th anniversary. Although the gardens, built on land previously inhabited by the army of samurai soldiers whose job it was to guard Himeji Castle, do have a slight false, made-for-the-tourist feel, it’s still a nice peaceful, picturesque place to lounge surrounded by gazebos, streams, carp pools, bonsai trees and impeccably manicured lawns. Koko-en Gardens in Himeji, Honshu, Japan. July 21st, 2005.