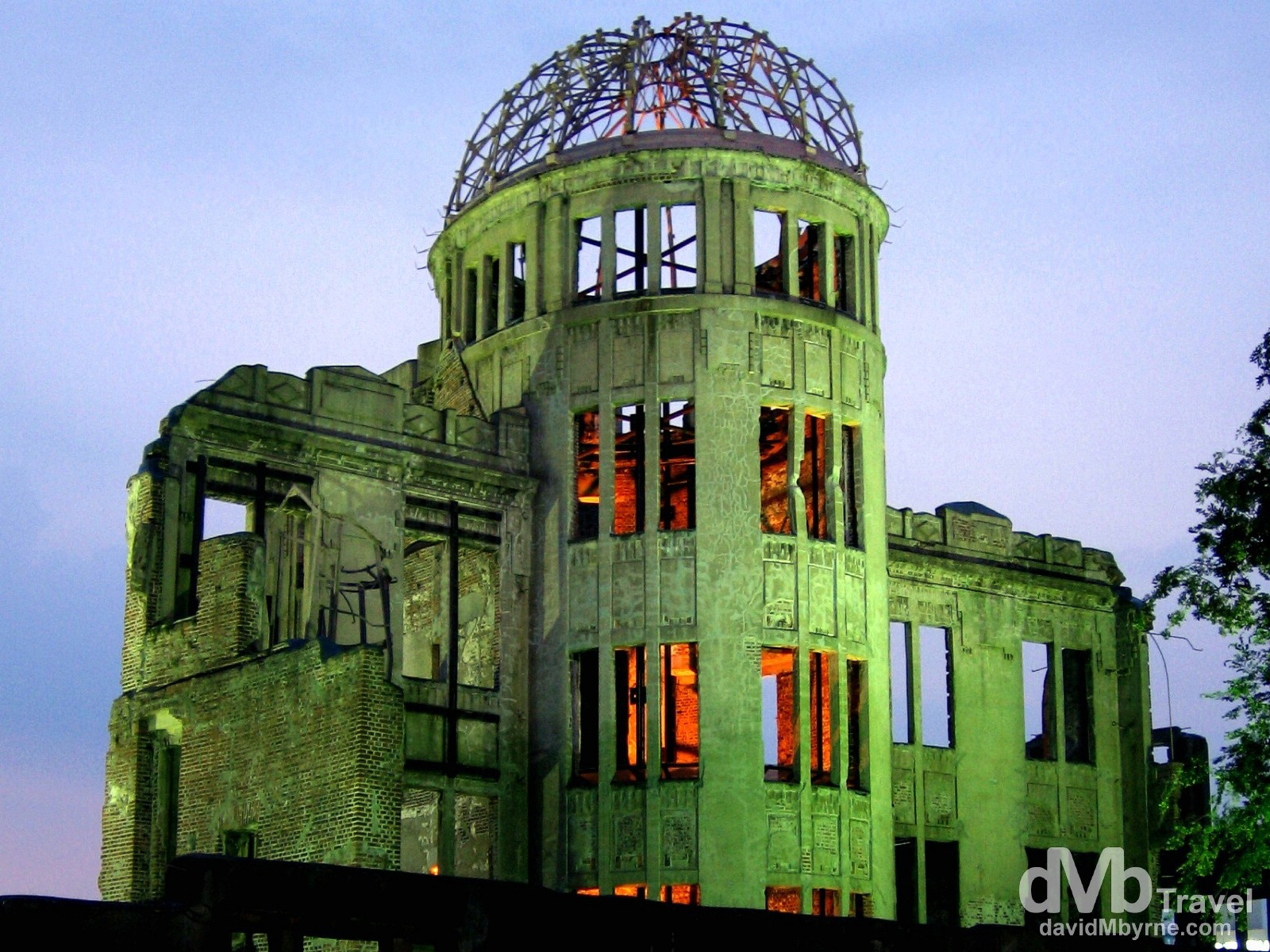 Hiroshima, my last stop on this my first visit to Japan, needs little introduction. It is known throughout the world as the first city in history subjected to nuclear warfare with the atomic bombing of the city by the Americans during World War II. Since that fateful day in August 1945, Hiroshima, the largest city in Western Honshu, Japan’s largest & most populated island, has become a byword for the devastating effects of the atomic bomb. It’s for this reason alone that millions visit the city annually. Most come to pay their respects at the city’s Peace Park Memorial and Memorial Museum but the city itself is an attractive port city, the total rebuilding of which is eloquent testimony to the power of man over destruction – where once there was nothing but ashes as far as the eye could see there now stands a busy, modern city, one that still contains an old-world feel with its creaky trams and sunny disposition. 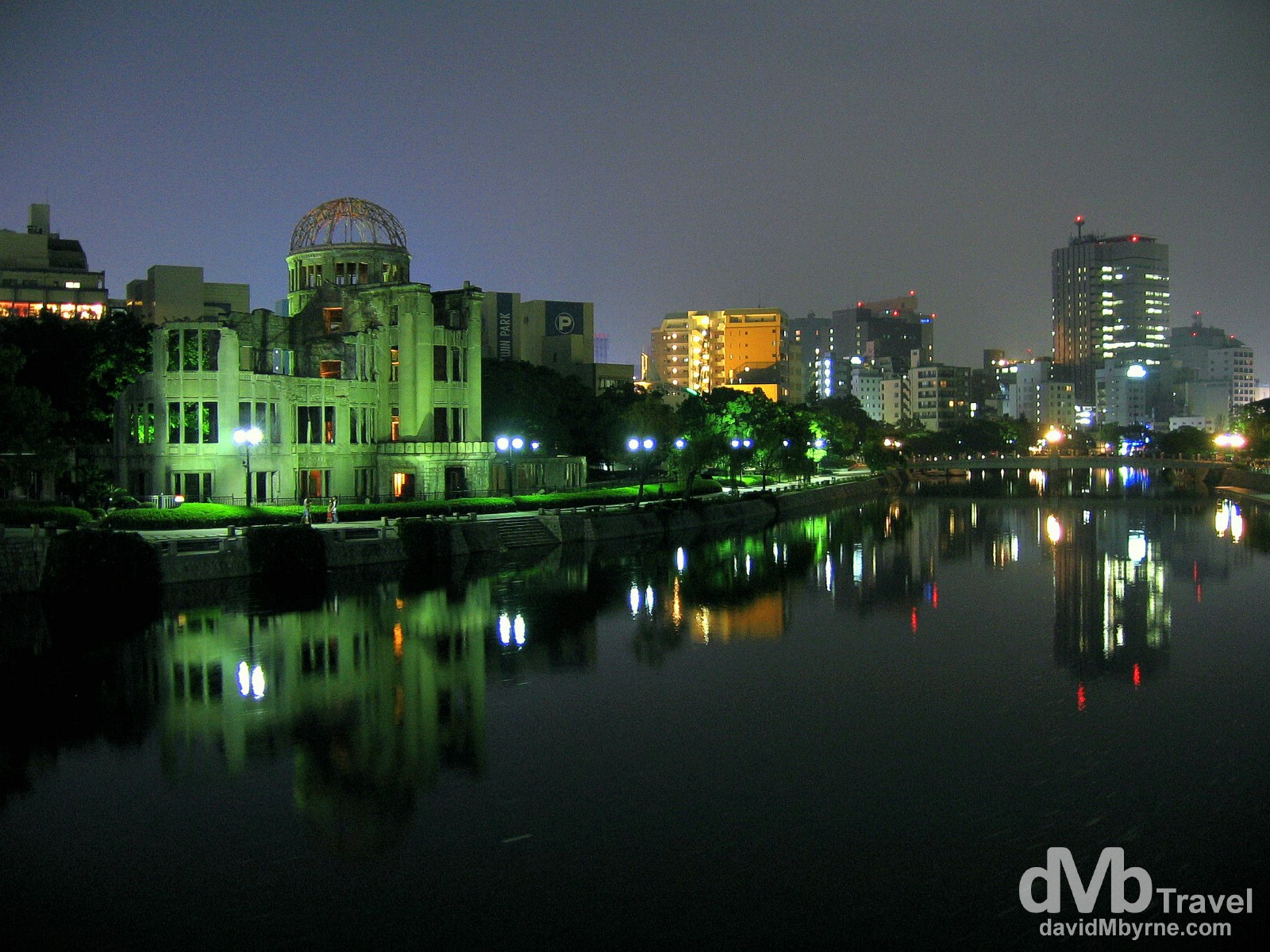 The most famous landmark in Hiroshima is the A-bomb Dome (Gembaku Domu in Japanese) next to the city’s Aioi River, one of many waterways in the city. This is a picture of the dome as seen from the T bridge over the river, the bridge that was used by the crew of the Enola Gay, the B29 bomber that dropped the bomb on Hiroshima, as the target for the bomb. As well as the dome, the bridge survived the initial blast although examination of it at the time revealed that after being released from the shock wave compression the entire roadway on the bridge sprang up into the air several meters before landing back down. The damage was repaired and the bridge remained in service for about 30 more years before being reconstructed. The A-bomb Dome by the The Aioi River in Hiroshima (

Attack Background || How Did It Come To This?
On December 7, 1941, the Japanese launched a surprise attack on the US naval base at Hawaii’s Pearl Harbour, starting the Pacific War of World War II. Although the early days of the Pacific war went well for the Japanese (in rapid succession, the Philippine’s, Indonesia, Malaya and Burma fell to the seemingly unstoppable Japanese forces) the tide was stemmed in New Guinea and, in June 1942, the US Navy won a decisive victory at the Battle of Midway by sinking Japanese aircraft carriers. Although Japan had launched its campaign to secure the “Great East Asia Co-Prosperity Sphere”, in which she would free her neighbours from colonization and help them develop like the West, the brutal and exploitative reality of Japanese occupation meant there was no support from these potential Southeast Asian allies. Nor was there a likelihood of military cooperation between Japan and Germany, who both eyed each other suspiciously despite the non-aggression pact they had between themselves. By 1944, & with the US capture of the Pacific island of Saipan, Japan was clearly heading for defeat in the war. The country was now within range of US heavy bombers but there was a determination to fight to the bitter end, as exemplified by suicidal kamikaze pilots and the defending forces on the islands of lwa-jima and Okmawa who fought to the last man. In March 1945 Tokyo was in ashes and 100,000 were dead fallowing three days of fire bombings. The government insisted that the emperor system remain inviolate when they put down arms, but no such assurances were offered by the Allies and in July 1945 they called for Japan’s unconditional surrender. Japan failed to respond providing the Allies with the excuse they needed to drop the Atomic bomb on Hiroshima on August 6.

The A-bomb Dome’s original name was the Industrial Promotion Hall and it was considerably larger than the remains left after the explosion (the city’s Peace Memorial Museum has a model of the building before the blast). Although the building sustained major damage (its interior was completely burned and all 30 people in the building at the time died) it remarkably was one of the few buildings left standing within a two kilometre radius of the explosion. In 1967 the dome was declared a symbol that should remind the people of the world of the terrible disaster. Standing looking up at the structure, looking just like it did after the bomb exploded, was an eerie, hair-standing-on-the-back-of-your-next sort of experience. This picture was snapped in the late evening just after arriving in the city from Himeji. The A-bomb Dome by The Aioi River in Hiroshima, Honshu, Japan. July 22nd, 2005.

Attack Background || Why Hiroshima?
As a garrison town Hiroshima was an obvious target during World War II but until that dark day in August 1945 it had been spared Allied bombing. It’s speculated that this was an intentional strategy by the US military so that the effects of the bomb when exploded could be fully understood. Even so, when the B29 bomber Enola Gay set off on its mission Hiroshima was one of three possible targets (the others being Nagasaki and Kokura) whose fate was sealed by reconnaissance planes above the city reporting clear skies. When “Little Boy”, as the bomb was nicknamed, exploded 580 metres above the city at 8.15 am it unleashed the equivalent of the destructive power of 15,000 tonnes of TNT. Beneath some 350,000 people looked up and saw the sun fall to earth. In less than a second a kilometre wide radioactive fireball consumed the city. The heat was so intense that all that remained of some victims was their shadow seared onto the rubble. Immediately some 70,000 buildings and 80,000 people were destroyed. Two days later the USSR declared war on Japan while the next day the second A-bomb exploded over Nagasaki. With millions homeless and starving and the country brought to its knees it was a breathtaking understatement for Emperor Hirohito to broadcast, on August 15, 1945, that the war had “developed not necessarily to Japan’s advantage”. For his subjects, gathered at wireless sets around the country, the realization of defeat was tempered by their amazement at hearing, for the first time, the voice of a living God. 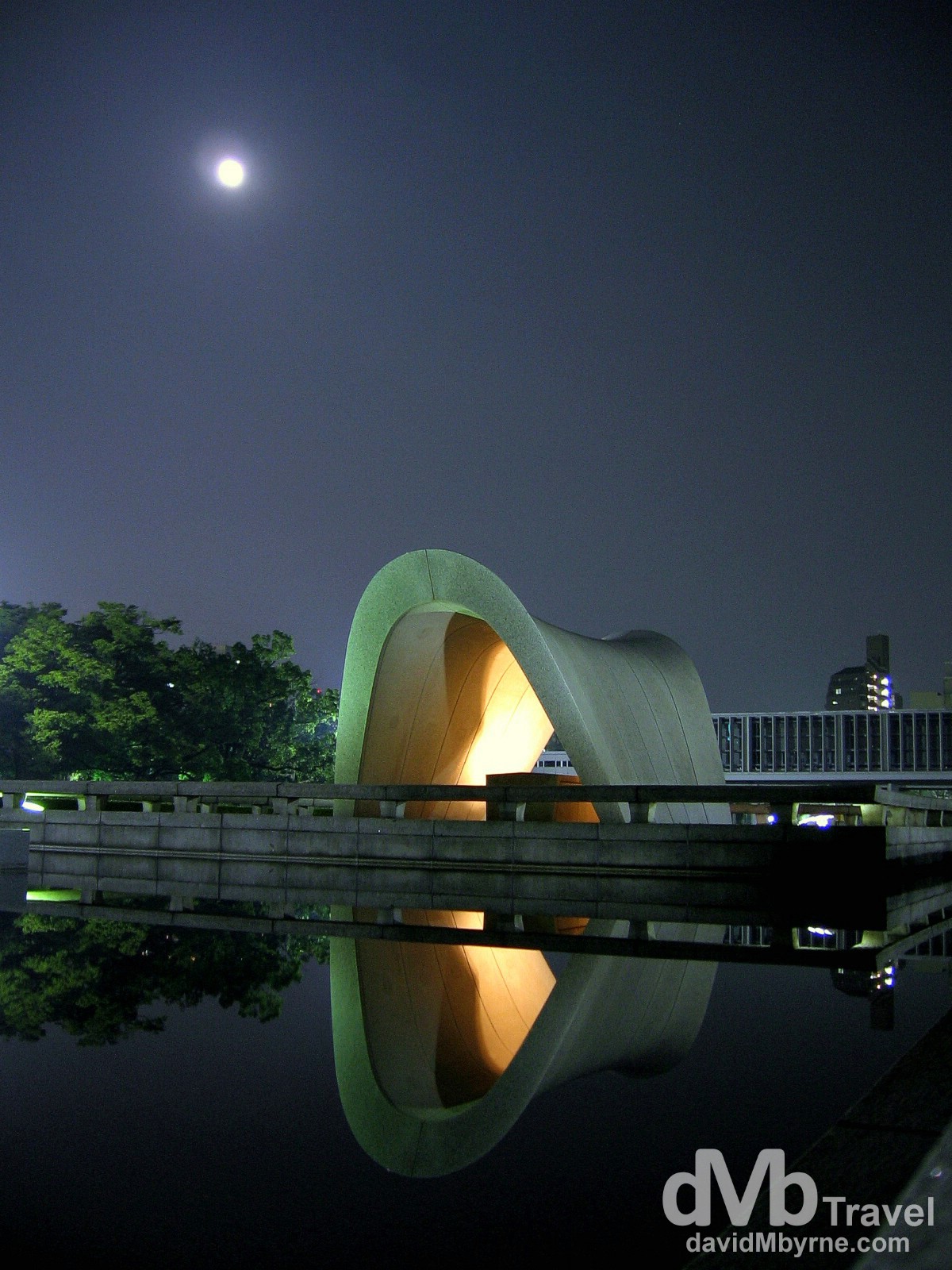 Reflections of the Memorial Cenotaph in Hiroshima Peace Memorial Park on Nakajima island, the central monument to honour and console the souls of the victims of the A-bombing. After the bombing the city of Hiroshima launched a campaign petitioning the national government for aid in the construction of a city of peace. The campaign resulted in the Hiroshima Peace Memorial City Reconstruction Law. The first special law of its kind, it stipulated that Hiroshima would be rebuilt to embody the striving of the human race for peace. It further stipulated that the area of Nakajima Island near the hypocenter be preserved in perpetuity as a symbol of peace and recommended the construction of what is now Hiroshima Peace Memorial Park and its attendant facilities. The Peace Memorial Park includes Nakajima Island and the strip of land across the Motoyasu River where the A-bomb Dome stands. At the south entrance to the park stand three buildings lined up east to west. These three buildings, one of which houses the Hiroshima Peace Memorial Museum, serve a variety of functions through which the city works to preserve the memory of the A-bomb and bring about world peace. The park also contains the A-bomb Dome, the Fountain of Prayer & the Flame of Peace, due to be extinguished when the last nuclear weapon on the planet is destroyed. Hiroshima, Japan. July 21st 2005.

Let All The Souls Here Rest In Peace; For We Shall Not Repeat The Evil.

The Aftermath
The dropping of the bomb was only start of the suffering for the people of Hiroshima. By the end of the year 60,000 more had died from burns, wounds and radiation sickness. The final death roll is still unknown, the figure offered by the Hiroshima Peace Memorial Museum being 140,000 (plus or minus 10,000). Many survivors despaired of anything growing again for decades in the city’s poisoned earth but their hopes were raised on seeing fresh buds and blossom on the trees less than a year after the blast. 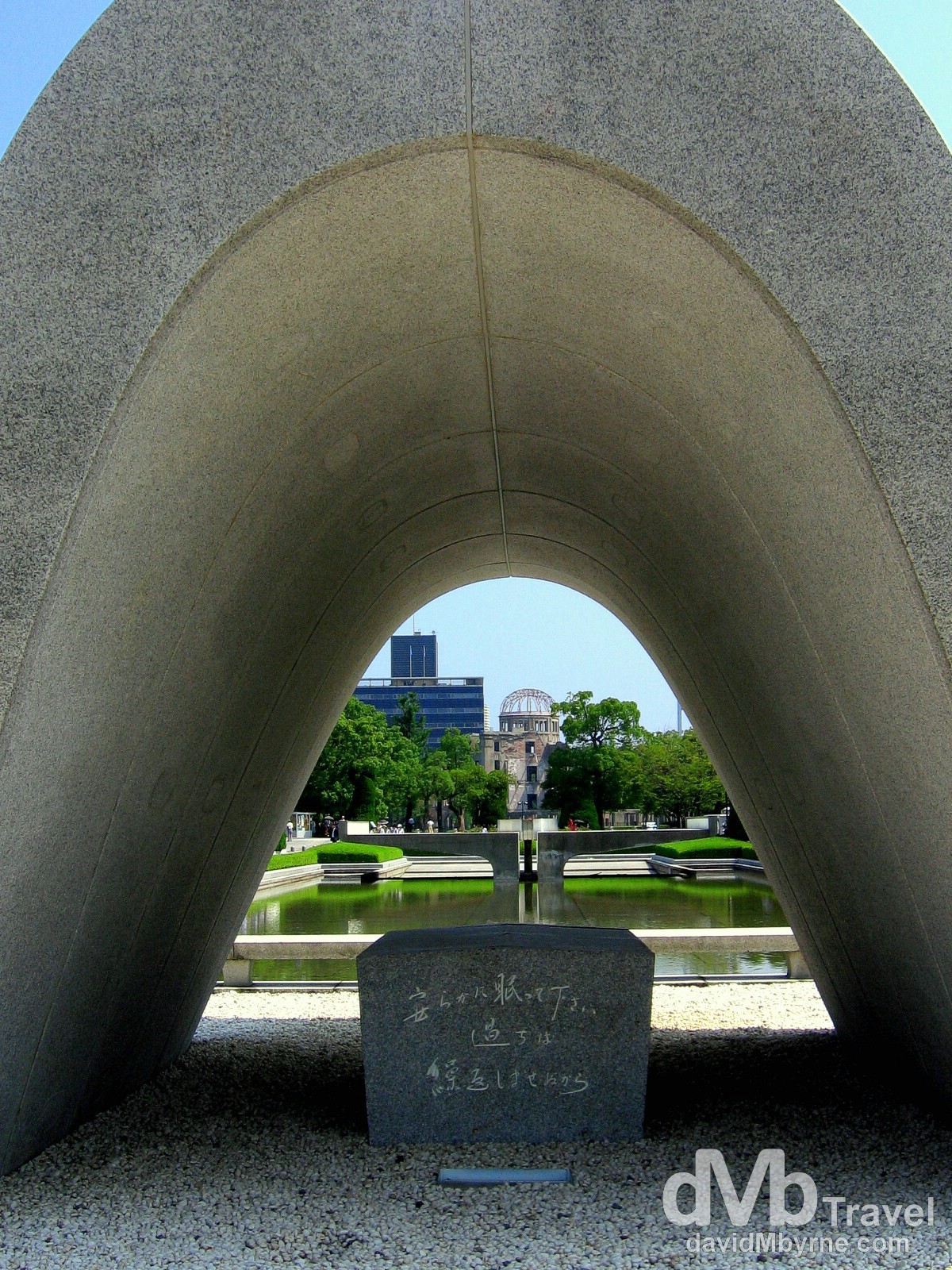 The Memorial Cenotaph was unveiled on August 6, 1952, & stands close to the exact center of Peace Memorial Park. Its design evokes the primitive shelters provided to earthenware dolls buried in ancient burial mounds during the Kofun period (3rd to 7th century). At the centre of the concrete structure, which was resurfaced with granite in March 1985, lies a stone coffin which holds the register of the A-bomb Victims. Each year on August 6 the names of victims reported by their friends or families to have died of A-bomb-related diseases are added to the register. The Japanese characters carved on the front of the coffin say, “Let All The Souls Here Rest In Peace; For We Shall Not Repeat The Evil.” These words are a pledge never again to repeat the evil of war that visitors make as they pray for the repose of the souls of the A-bomb victims. They express Hiroshima’s determination to endure the sorrows of the past, transcend all rage and hatred, and work tirelessly for a world of genuine peace and mutual prosperity. Hiroshima Peace Memorial Park, Hiroshima, Honshu, Japan. July 22nd, 2005.

Hiroshima Today
The reborn Hiroshima, with its population of more than a million, is now the self-proclaimed “city of international peace and culture” and one of the most memorable and moving days to visit the city is August 6, when a memorial service is held in the Peace Park and 10,000 lanterns for the souls of the dead are set adrift on the Ota-gawa delta. However, for all Hiroshima’s symbolic importance it’s important to put the number of those killed into context. During the World War II battle of Okinawa, 265,000 people were killed in a few weeks, more than in Hiroshima and Nagasaki combined, while close to 200,000 died in Tokyo in a single night of allied bombing in 1945 (and the Japanese themselves are said to have brutally massacred a similar number of soldiers and civilians in Nanking, China). 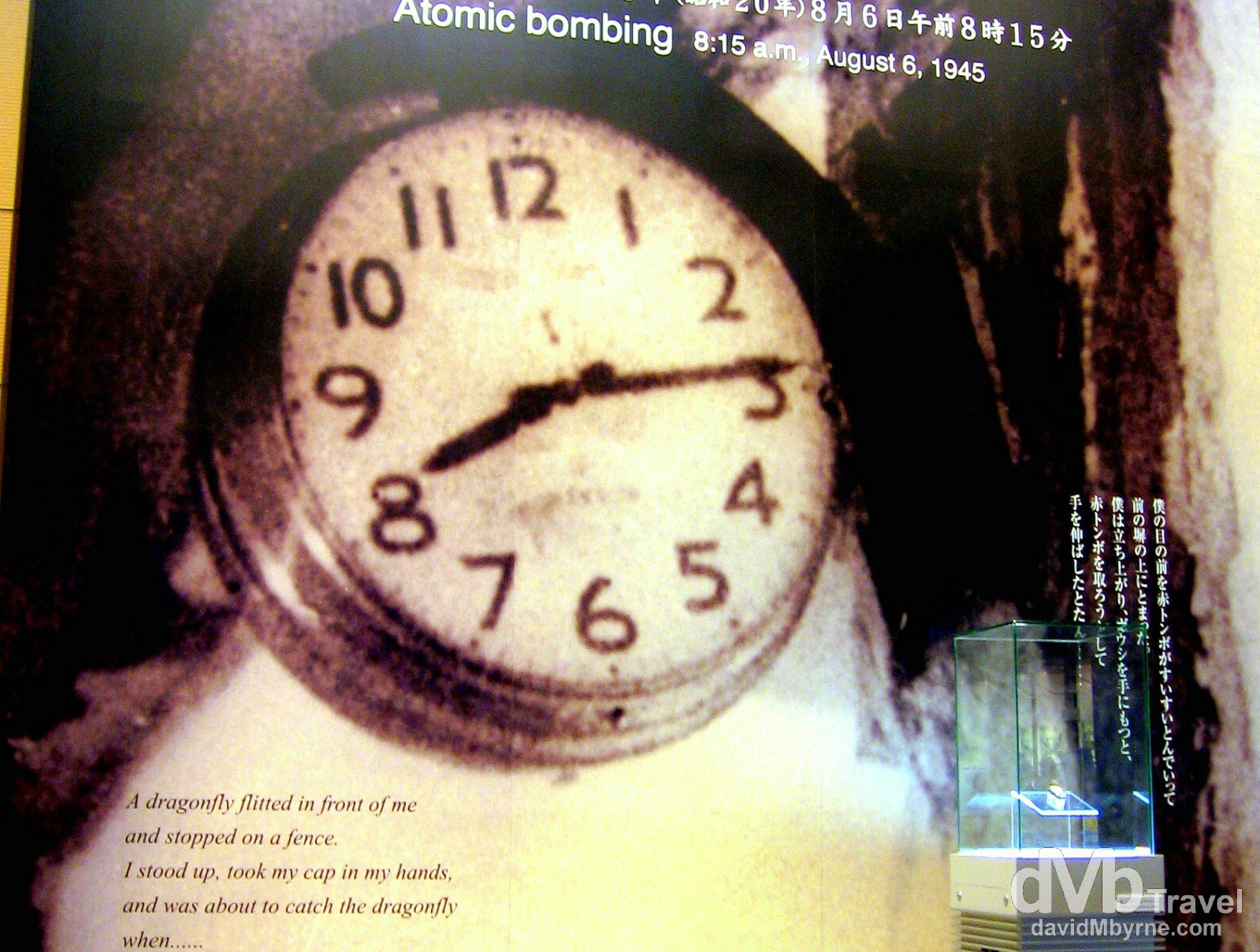 A display in the Hiroshima Peace Memorial Museum showing a stopped watch at the exact time the bomb exploded. The display reads “A dragonfly flitted in front of me and stopped on a fence. I stood up, took my cap in my hands, and was about to catch the dragonfly when…”. I found the museum delivered a very balanced view on all aspects of the events leading up to the day of the bombing & its aftermath – there was certainty no anti-USA rhetoric in the museum presentations some of which were very graphic. Hiroshima Peace Memorial Museum, Hiroshima, Honshu, Japan. July 22nd, 2005.