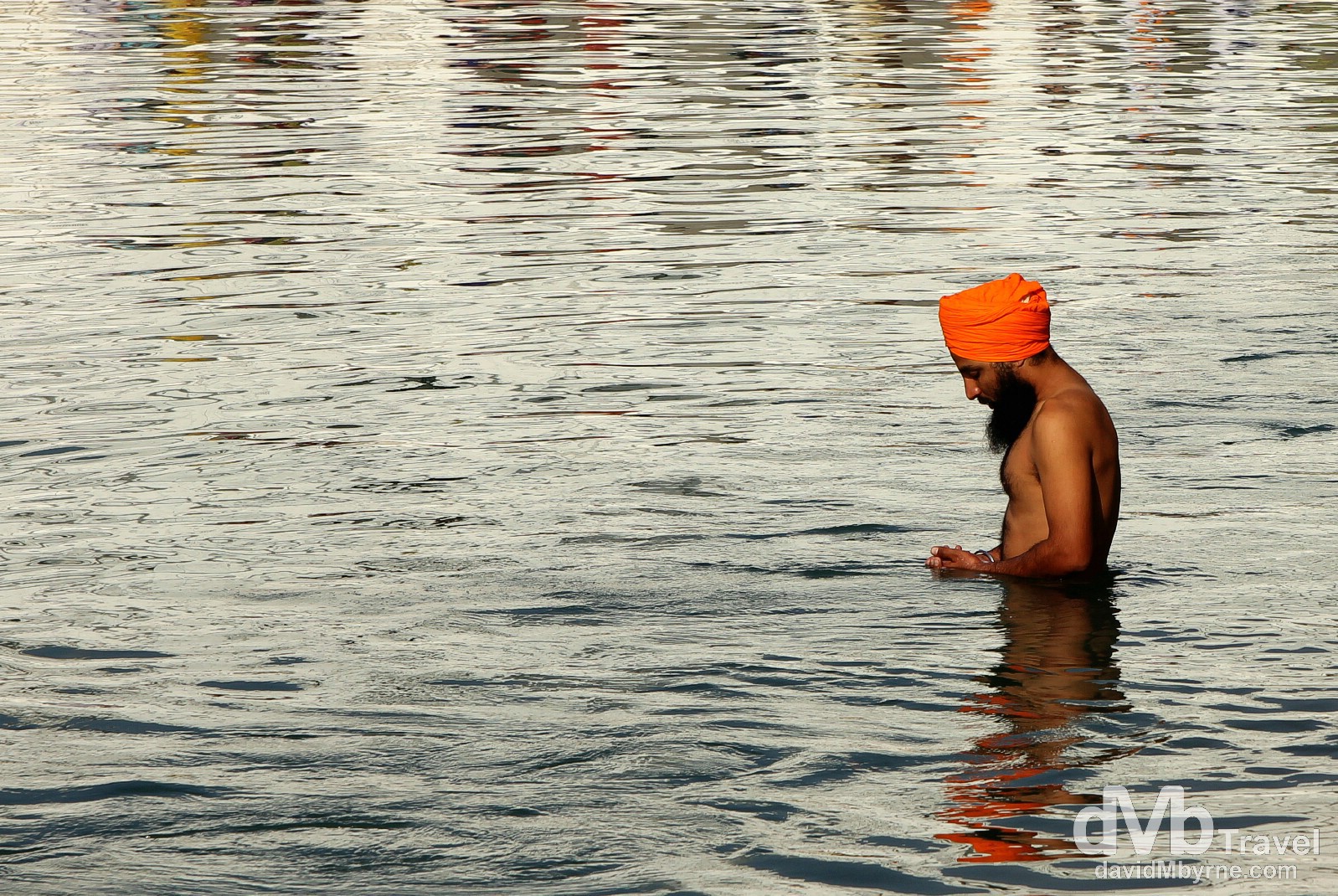 I‘m on the 8-hour train back to Delhi having spent the last two nights in the north-western Indian city of Amritsar, the capital of the Indian state of Punjab. The reason most travellers who venture up here, me included, is to lay eyes on the city’s glittering Golden Temple, the holiest shrine in Sikhism & one of India’s most beautiful buildings. 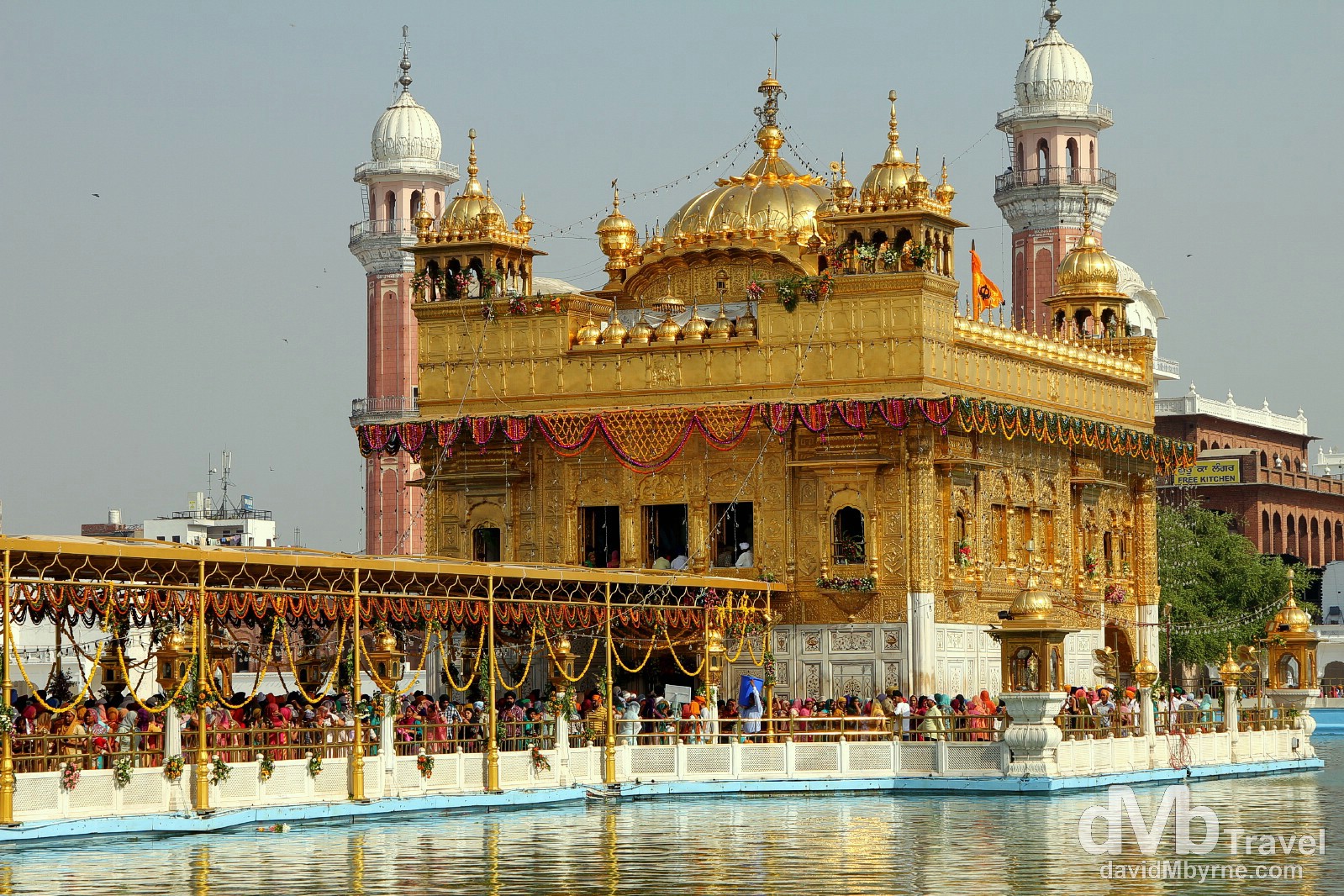 The Golden Temple, officially Harmandir Sahib. The centre of the Sikh faith & the site of its holiest shrine, the gold-plated gurdwara (a Sikh place of worship) glitters like a gold bullion bar in the middle of its holy pool Amrit Sarovar (Pool of Nectar) from which the town takes its name. It’s an astonishingly beautiful sight. Amritsar ( 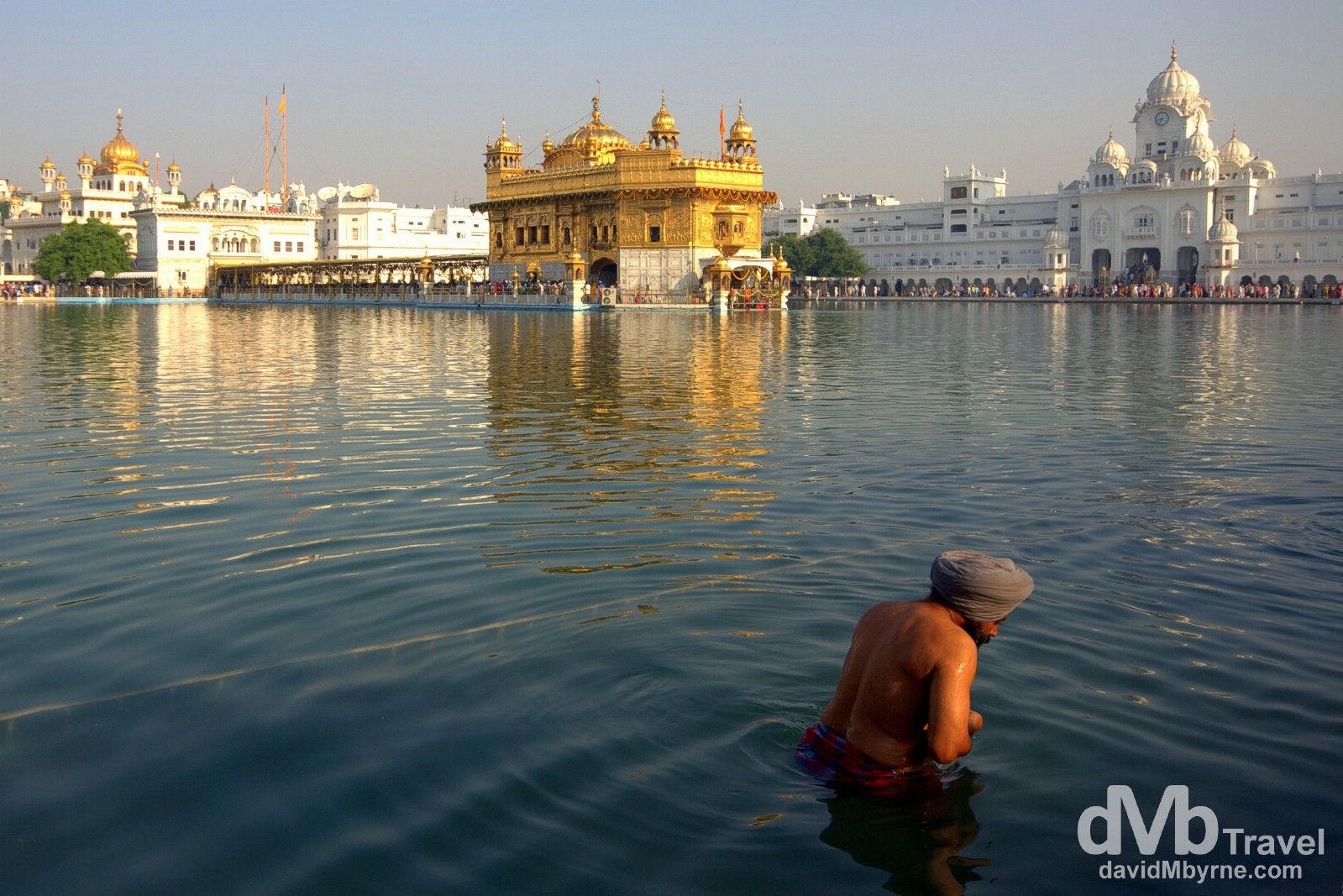 Sikh
I’d been to Punjab before, to the Punjabi capital of Chandigarh. That was over 4 years ago now but I have fond memories of the visit. I liked it. Liked it a lot. Not so much the city itself – it’s a very un-Indian place, a planned city with little to no history – but more the Sikhs, the turban wearing Indians who call the city & the Punjabi state home. 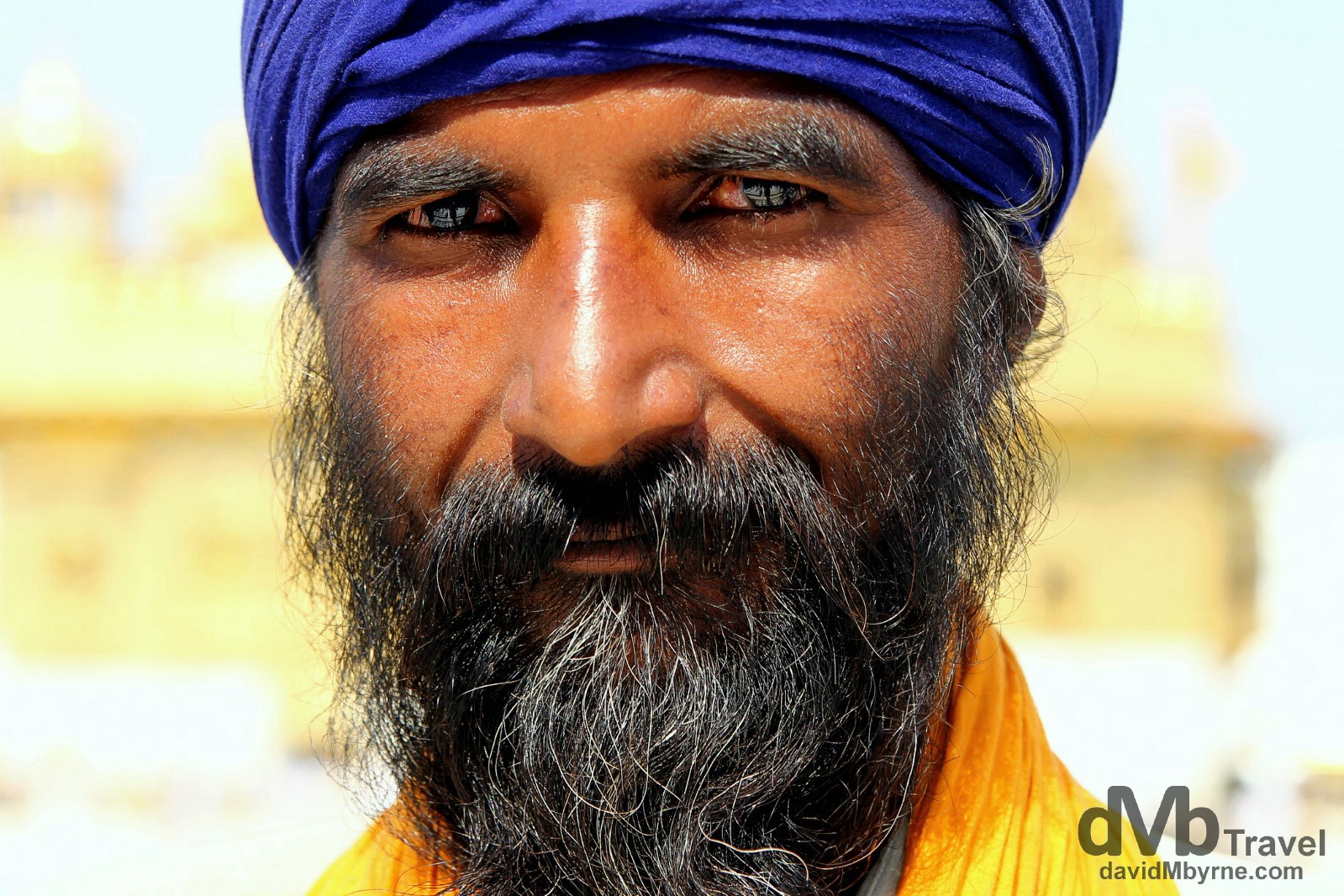 A Sikh devotee in the grounds of the Golden Temple. Sikhs make up the majority of the Punjab population, but only 2% of the overall Indian population. They are a liberal lot who like to have fun – they drink more per-capita than any other race of Indians which means if I had to be reincarnated as an Indian then I’d want it to be as a Sikh. They are a very friendly lot, very welcoming. It’s all part of the Sikh faith, one that combines elements of Hinduism & Islam & one that embraces all, no matter your colour or creed. One could understand were they to carry a chip or two. After all, it was their state, Punjab, that was divided down the middle in 1947 to create Pakistan – Punjab’s then two biggest cities, Amritsar & its capital Lahore, fell either side of the new border & the displacement caused no end of hassle (& deaths) & necessitated the building of a new capital for Punjab, the aforementioned Chandigarh. Amritsar, Punjab, India. October 9th 2012. 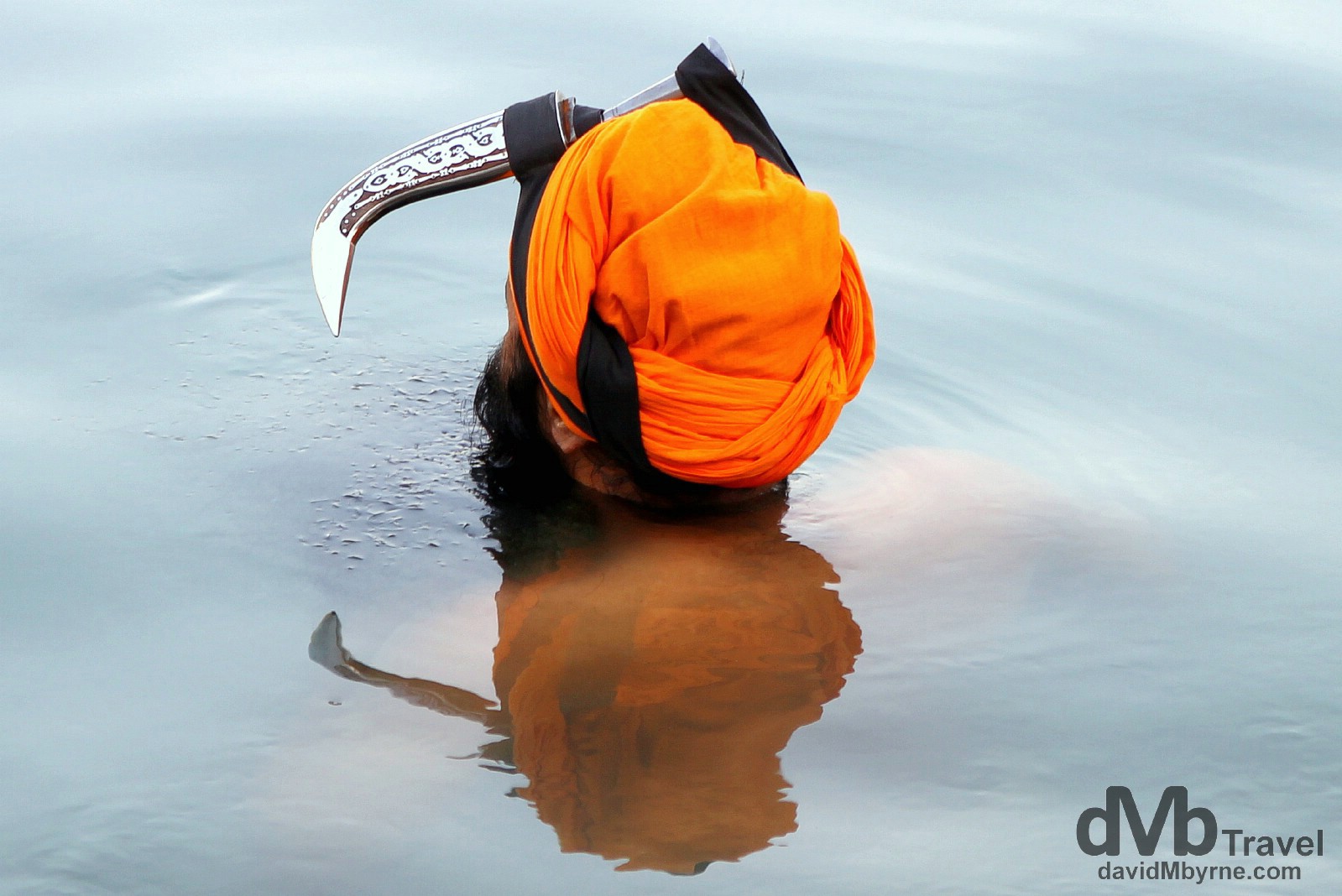 A Sikh devotee in the Amrit Sarovar (Pool of Nectar) in the Golden Temple complex. Sikhism was founded in Punjab in the 15th century by Guru Nanak, Sikhism’s first of ten gurus, as a reaction against the Hindu caste system & Brahmin domination of ritual. Central to the Sikh belief is equality & tolerance of all. As a result people from all walks of life, regardless of caste or creed, are welcomed in Sikh temples – the Golden Temple itself has 4 doors, one on each side, symbolising this openness. Their unshaven beard & uncut hair, one of the 5 Sikh emblems, symbolises saintliness, while the kirpan, the ceremonial four-inch curved dagger that Sikh men and women are obliged to wear at all times (seen in this above picture), symbolises power & dignity. Amritsar, Punjab, India. October 9th 2012.

A Sikh devotee in the Amrit Sarovar (Pool of Nectar) in the Golden Temple complex, Amritsar, Punjab, India. October 9th 2012.

Forth Guru’s Birthday || Double Celebration
Unknowns to me prior to arrival, my visit to the city coincided with Amritsar’s biggest one-day festival, the birthday of Sikhism’s fourth Guru, who also just happened to be the founder of the city of Amritsar. A double celebration. Needless to say it was probably the best day to visit the city and certainly the busiest. 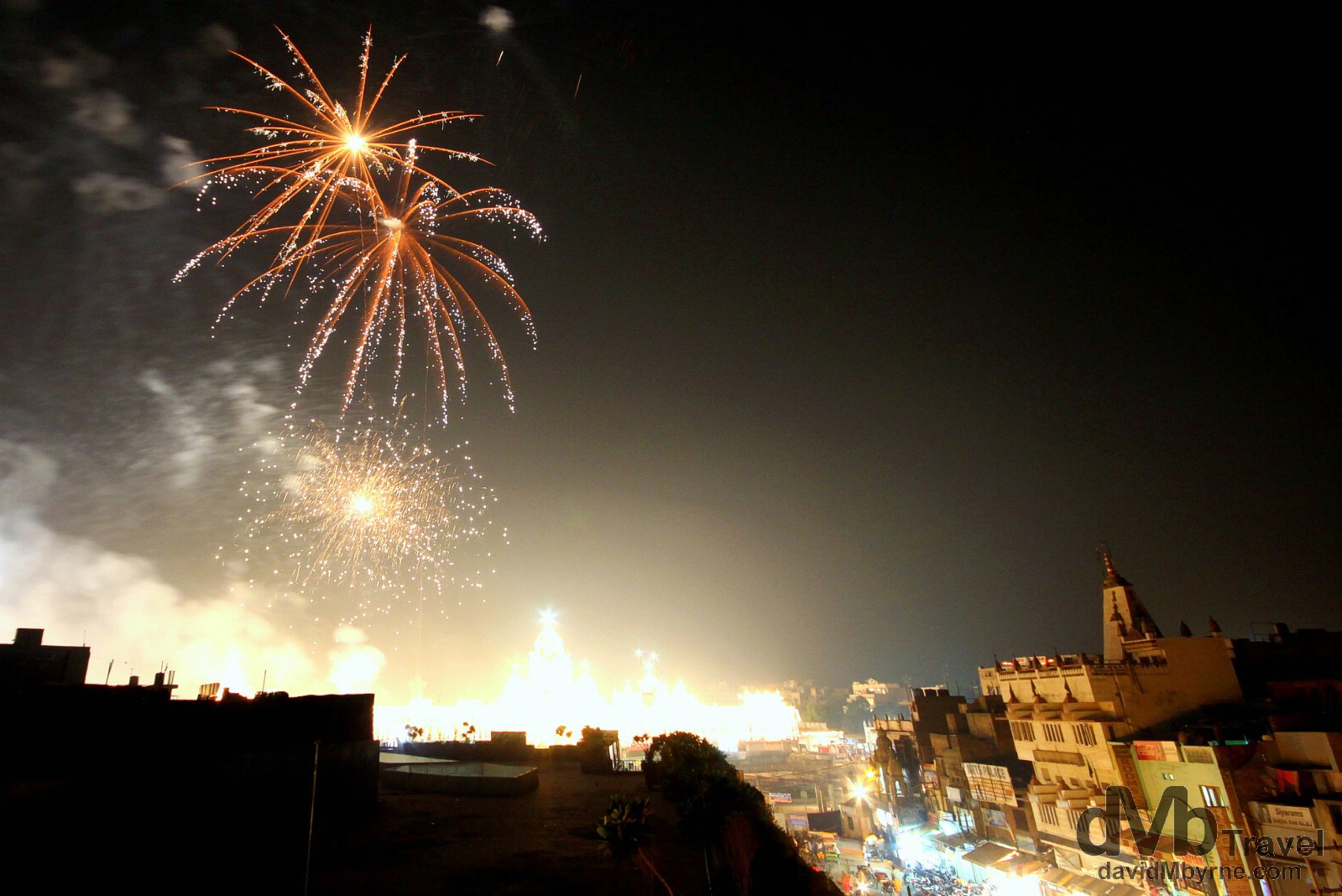 Fireworks at 3 a.m. over the Golden Temple very early on the day of the 4th Guru’s birthday. I had arrived in the city off the train from Delhi hours earlier and by the time I was woken from my slumber, regained sufficient consciousness & made it to the rooftop of my guest house with my camera, the fireworks spectacle was coming to an end. I didn’t really have time to set up my camera properly but regardless, I managed to capture this picture of one for the very last bursts which marked the start of an intense one-day of festivities. Amritsar, Punjab, India. October 9th 2012.

Four hours later I was back in the temple complex for sunrise and so began a long but very enjoyable day of photography. 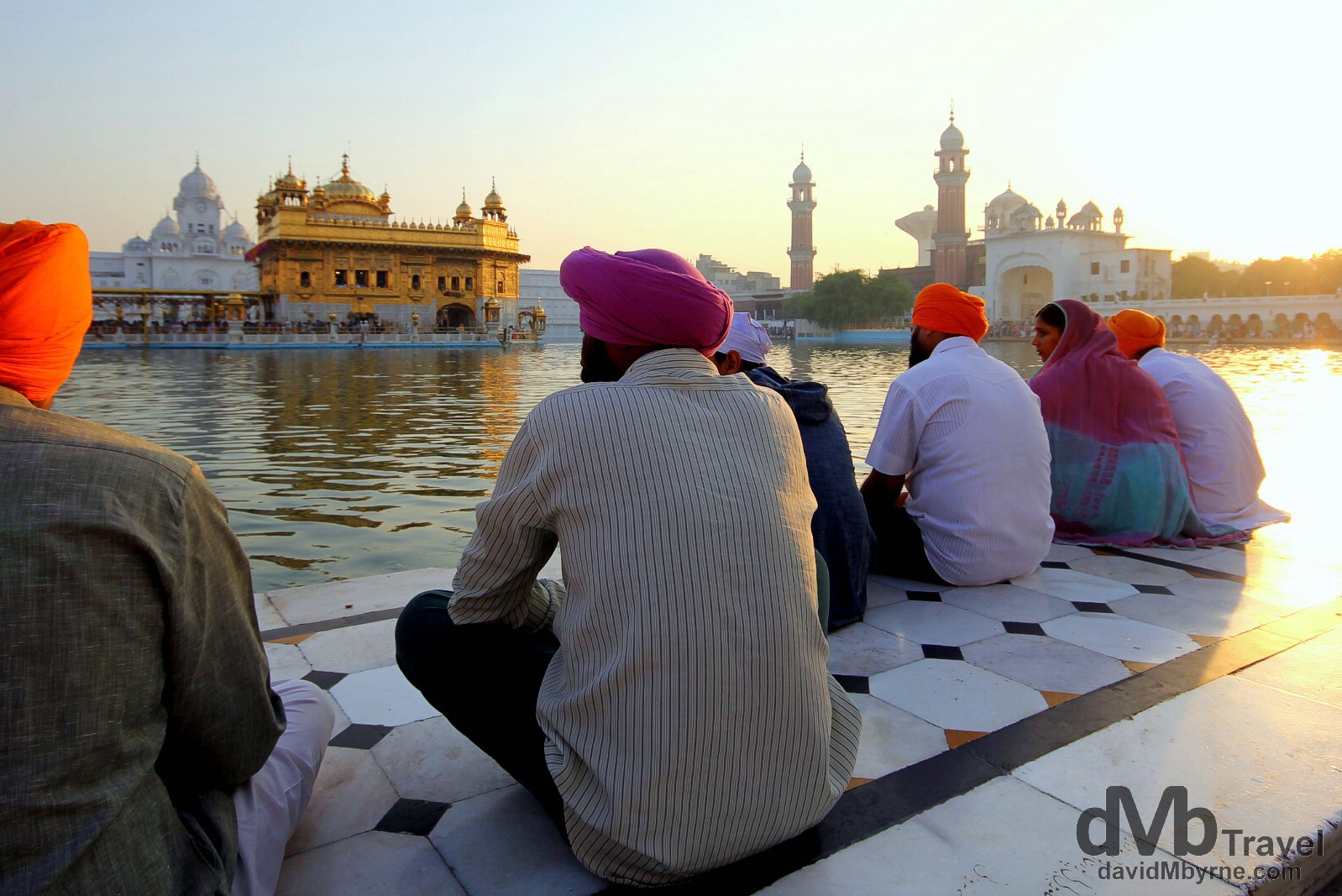 Sitting by the Amrit Sarovar (Pool of Nectar) at sunrise in the Golden Temple complex. The hum of people, the constant broadcast of prayers as read from the Guru Granth Sahib – the Sikh holy book – reverberating around the complex & the warm glow of candles all combined for a soothing experience inside the Golden Temple complex, belying the bedlam on the streets outside. But this place hasn’t always oozed inclusion & serenity. In 1984 it was the scene of a bloody stand-off between Sikh separatists (demanding their own state) & the Indian army. The then Indian Prime Minister Indira Gandhi, the daughter of independent India’s 1st Prime Minister, made an ill-considered decision to send in the army to flush out the separatists. This heavy-handed storming of the Sikhs’ holiest temple was catastrophic. It sparked massive Hindu-Sikh riots that killed thousands and ultimately cost Gandhi her life – she was assassinated by her Sikh bodyguard shortly after. In the Golden Temple complex, Amritsar, Punjab, India. October 9th 2012 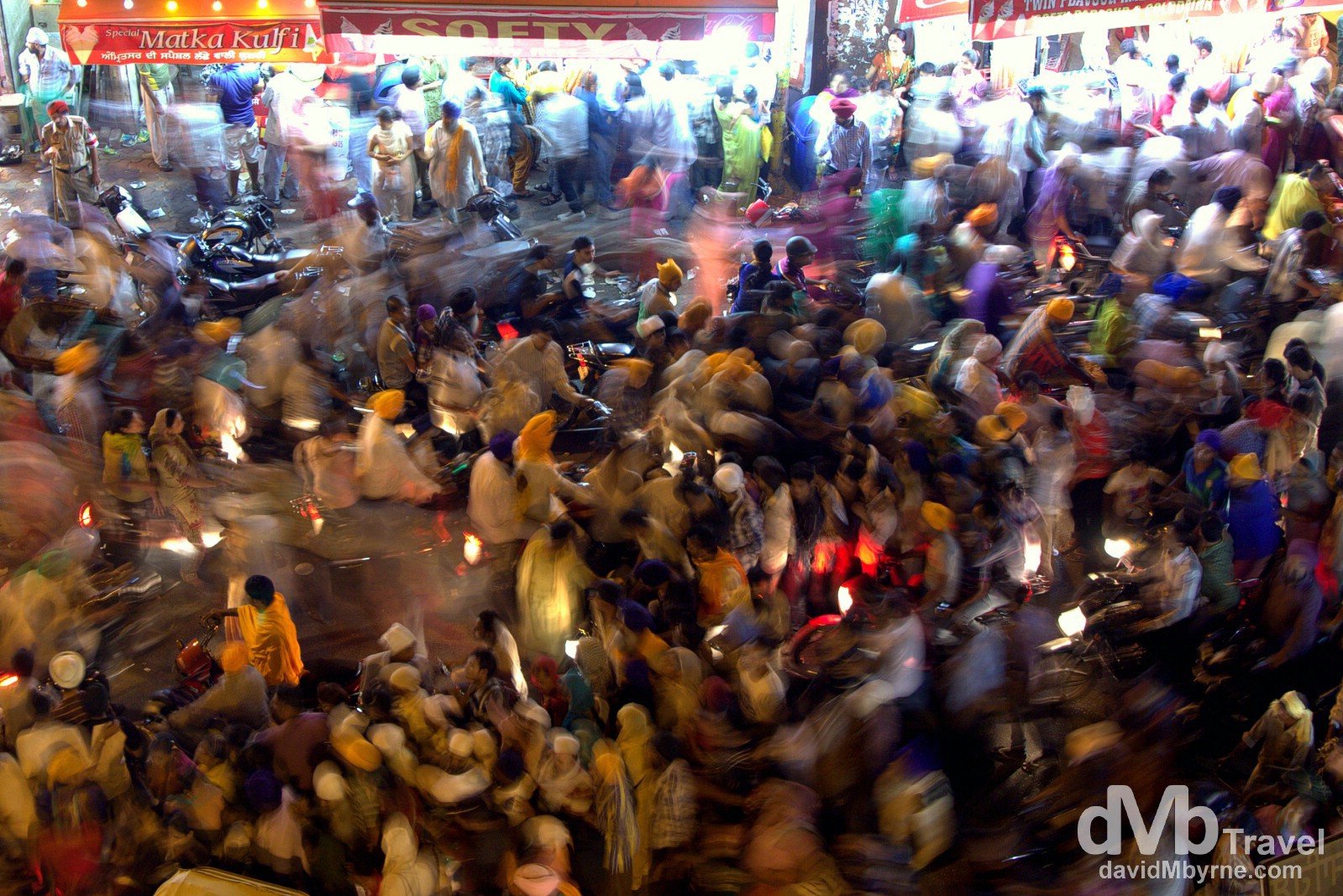 Crowds making their way to & from the Golden Temple along the crammed Old City streets of Amritsar. I took the above picture from the rooftop of my guest house shortly after arriving back in the city from witnessing the nearby India-Pakistan border closing ceremony. It seemed like everyone in India was either going to or coming from the Golden Temple. It was quite the spectacle. I ventured down into this melee sometime after taking this picture and had quite the adventure getting back to the Golden Temple for some night time photography. Amritsar, Punjab, India. October 9th 2012. 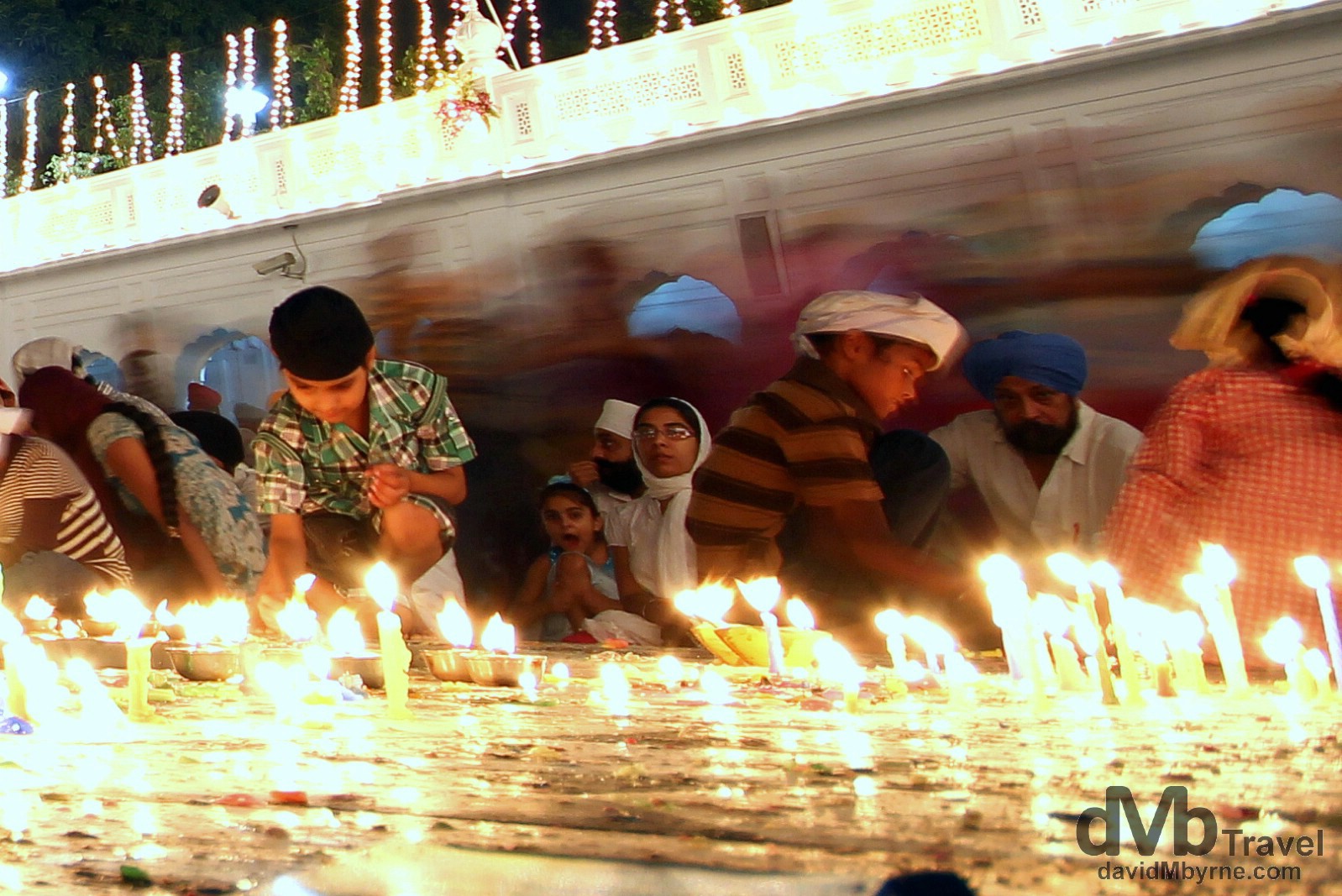 Lighting candles by the edge of the Amrit Sarovar (Pool of Nectar) in the Golden Temple complex. 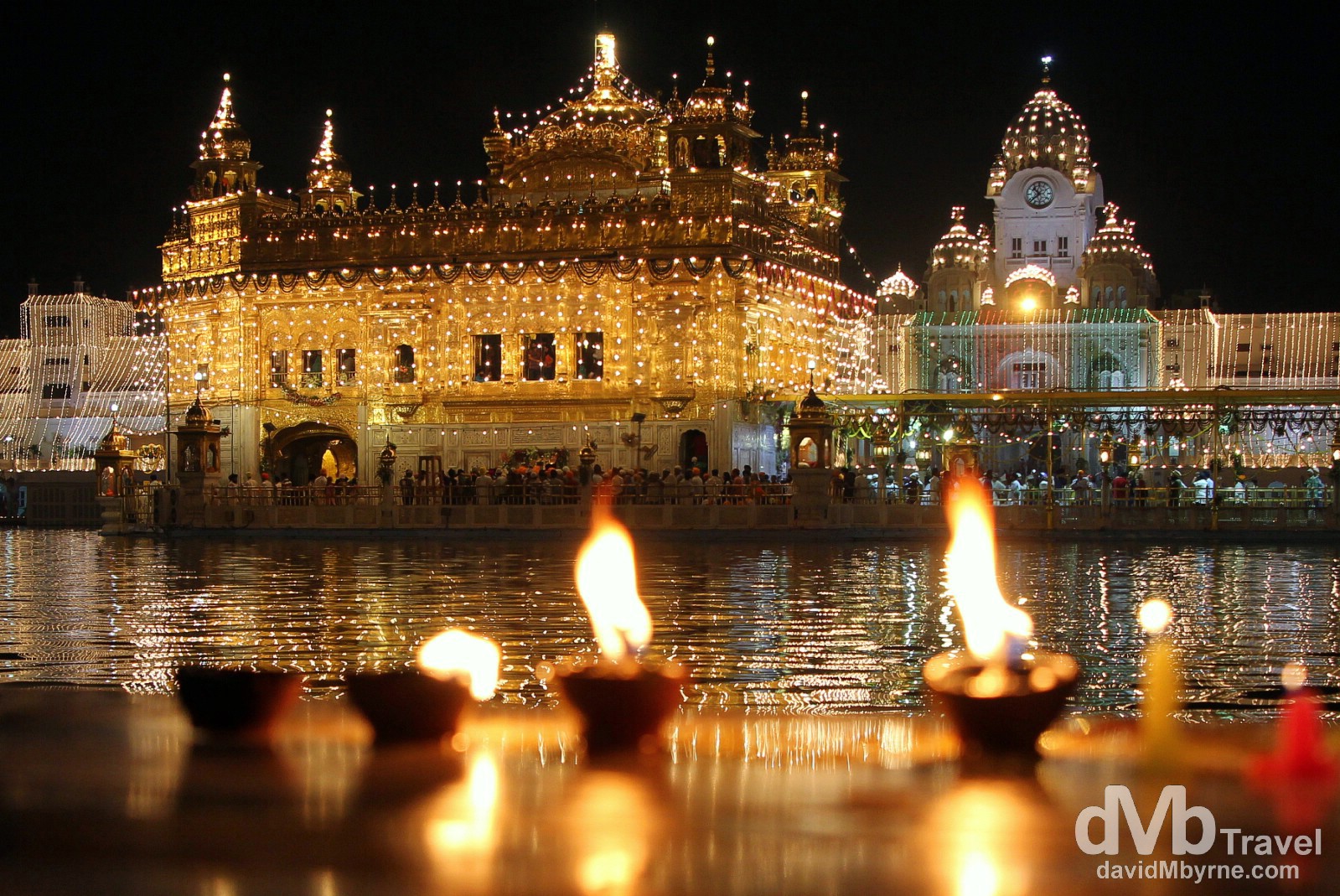 From Gold To Marble
Yesterday was a busy day – 3 a.m. fireworks, sunrise at the Golden Temple & sunset at the India/Pakistan border crossing, all interspersed with crowd skirting, handshaking & posing for photographs with countless friendly, curious Sikh Indians. I have over 1000 pictures on file from yesterday – 1098 to be precise – meaning it was easily the busiest day of photography I’ve had in a long time. But today is a new day, today is a travel day. It’s 8:00 a.m. and I’ve already been up for 3 hours, en route back to Delhi. It’s sort of nice to be sitting, relaxing, on a train, this train, even if my assigned seat has seen (much) better days. I’m due into Delhi at 2:30 p.m. where I’ll hang around for a few hours before getting another 3-hour train ride to Agra, my ultimate destination for this day. Of course Agra needs little introduction – it’s the home of the Taj Mahal. That beckons tomorrow when I’ll pay my third visit to India’s marble wonder, probably the most famous monument of them all.