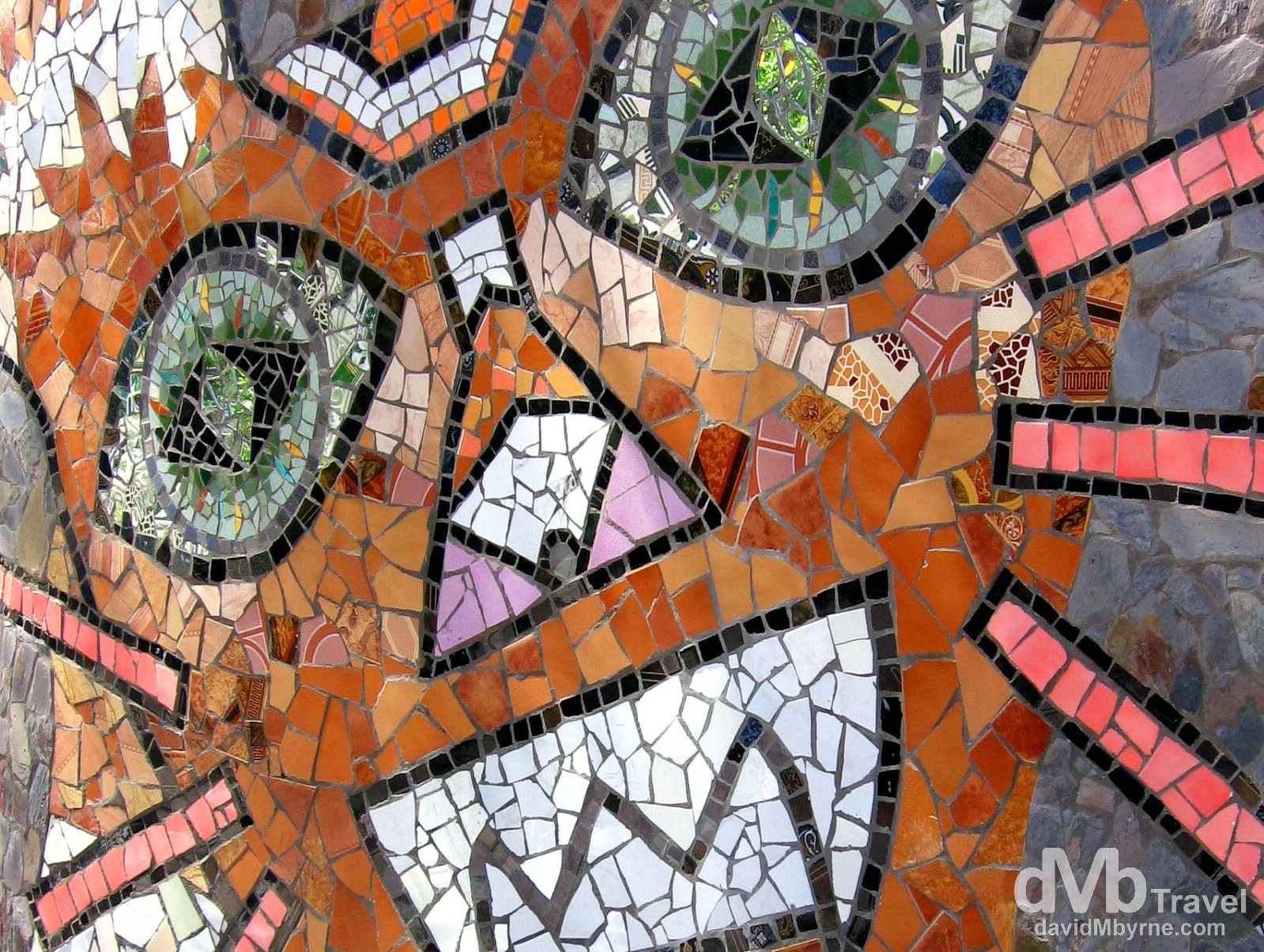 I‘m in a place called Chandigarh, the capital city of the Punjab region of India, northwest of Delhi. Yep, we’re definitely still in India, even if this place doesn’t look or feel like the India we’ve spent the last 8 days dealing with. We got here yesterday morning and the un-Indianness (my word, bear with me please) started even before we got here; we were pampered with tea, biscuits and a hot breakfast (a tinfoil box of fried egg and sausages) on the fast 3-&-a-half hour train ride from Delhi.

Symbolic to the future of India, unfettered by the traditions of the past, and an expression of the nation’s faith in the future.

It was Pat’s idea to come here. He wanted to visit the Rock Garden (more on that later) which, as it turned out, was reason enough for coming here. But having spent the last 36 hours in the city we now know that there are many fine reasons for paying this most un-Indian of Indian cities a visit, not least because it’s different. Very different. Very unIndiand – it’s modern, laid-back & clean. Oh, and things here actually seems to work. Yes, it’s all very un-Indian even though there are tons of Indian’s, Sikh Indians, around.

The Rock Garden is a place that belies the ordered city surrounding it. It’s a bizarre, haphazard, open-air sculpture garden, a surreal fantasy land fashioned from assorted urban-industrial junk, pebbles, broken plates, pots, and bangles. It’s a labyrinth of different enclosures interconnected by narrow passages, low doors (the place was seemingly built for Hobbits) arched walkways, bridges, streams, water features and grottos. Construction began in 1965 by a terminally bored local called Nek Chand, someone who having recently retired had, evidently, way too much time on his hands (he says the whole idea was inspired by a childhood dream/nightmare). By the time the garden was ‘discovered’ in 1973 it covered 12-acres (how anyone can hide 12-acres of anything in India for not 1, not 2, but 8 years is beyond us) and although the 12-acre site was completely illegal it went on to be recognised as a great artistic endeavour that should be put on display for all to see. So, rather than getting thrown in jail for his 8 years of toil, Nek, who has since been praised internationally for his ‘artistic ingenuity’, was given a salary and a workforce to continue his now not-very-little and now not-very-secret project. The site, now measuring 25-acres, was opened to the public in 1976 and today it’s the second most visited tourist attraction in India after the Taj Mahal, another statistic our book has us skeptics doubting. We spent a few hours yesterday afternoon taking in the ‘delights’ of the Rock Garden, somewhere Pat seemed to appreciate more than I. You could say he got his rocks off, but that would be just too lame. So so lame. 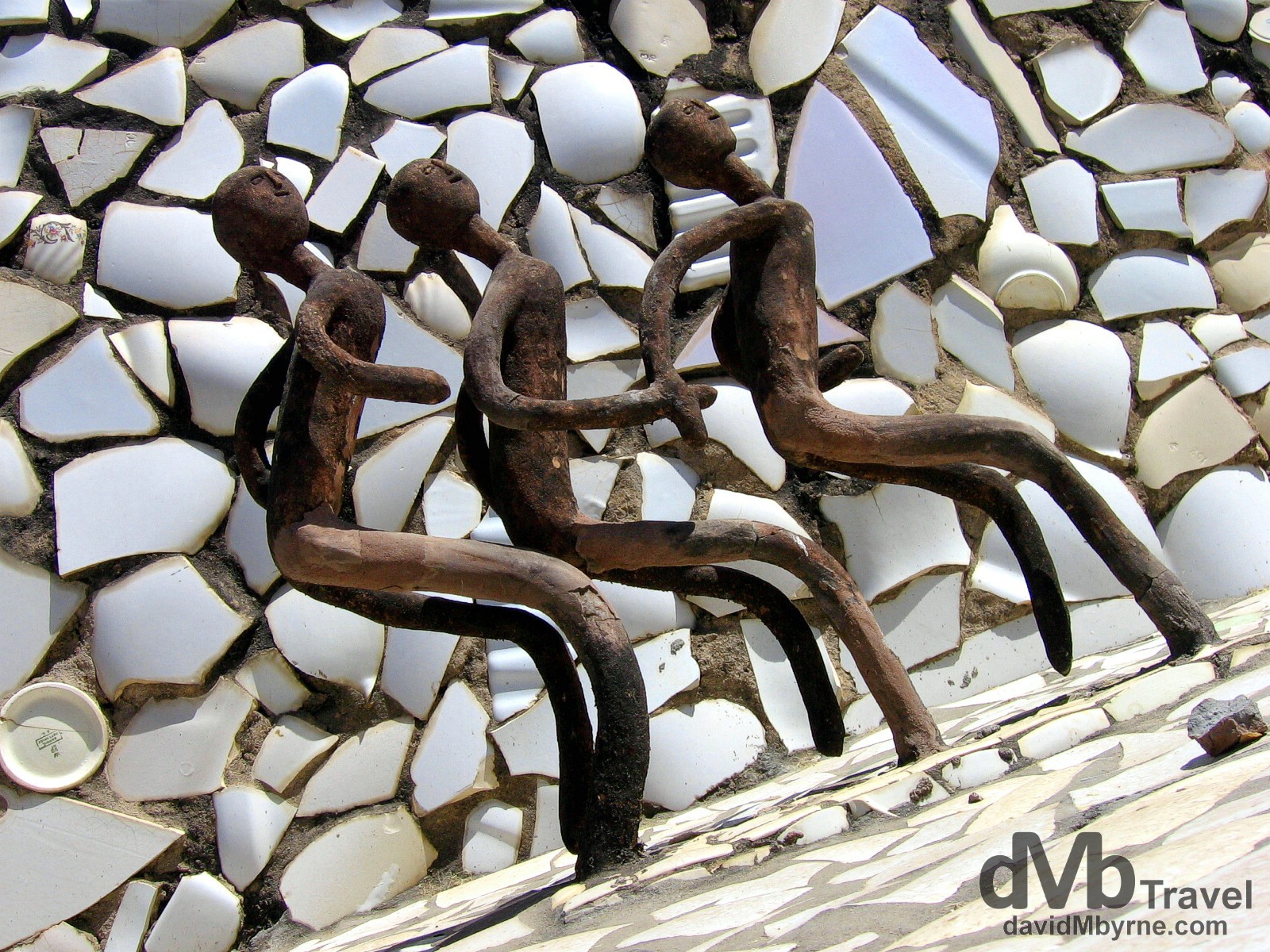 Sculptures in the Rock Garden in Chandigarh, Punjab, India. March 23, 2008. 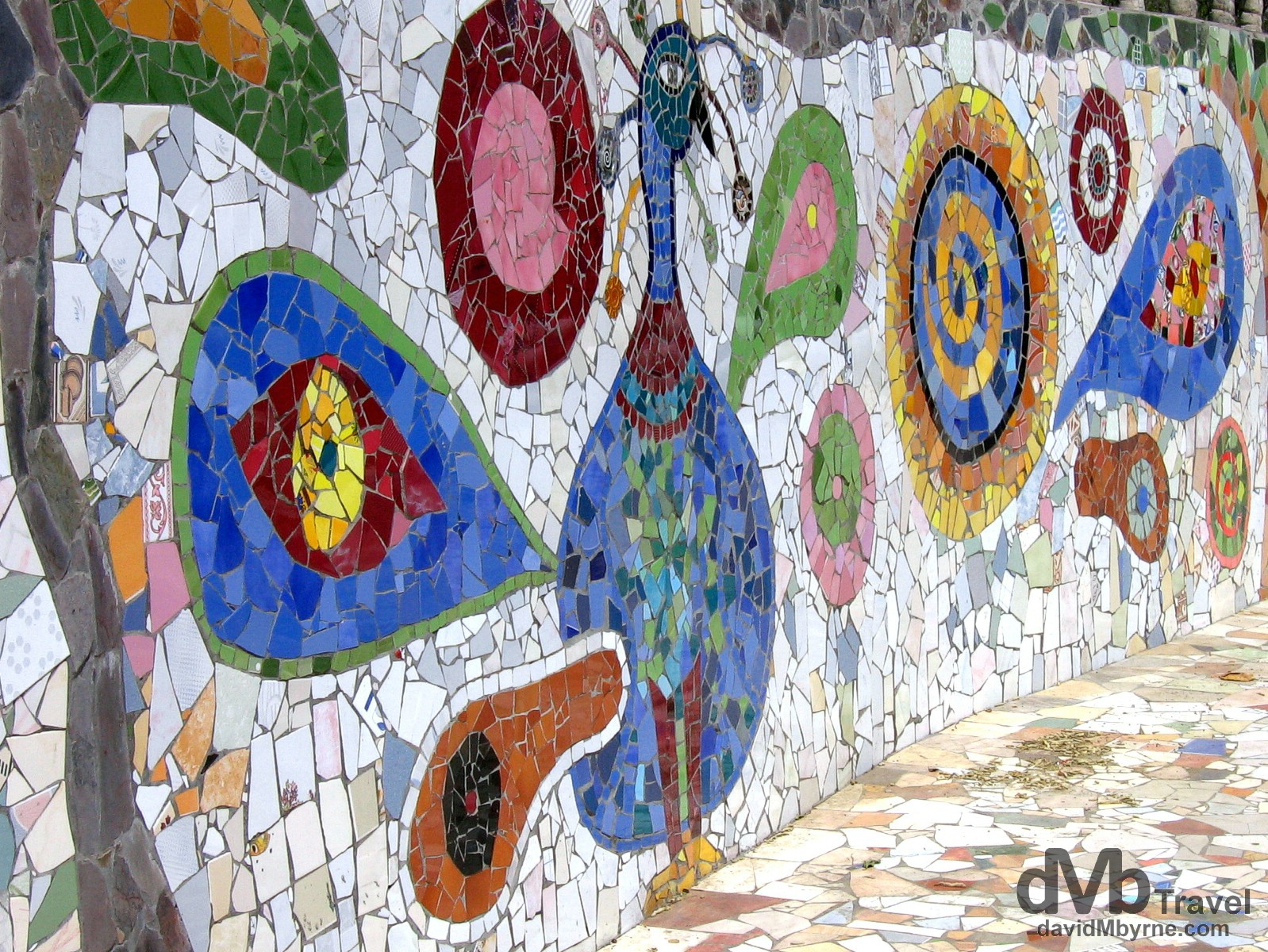 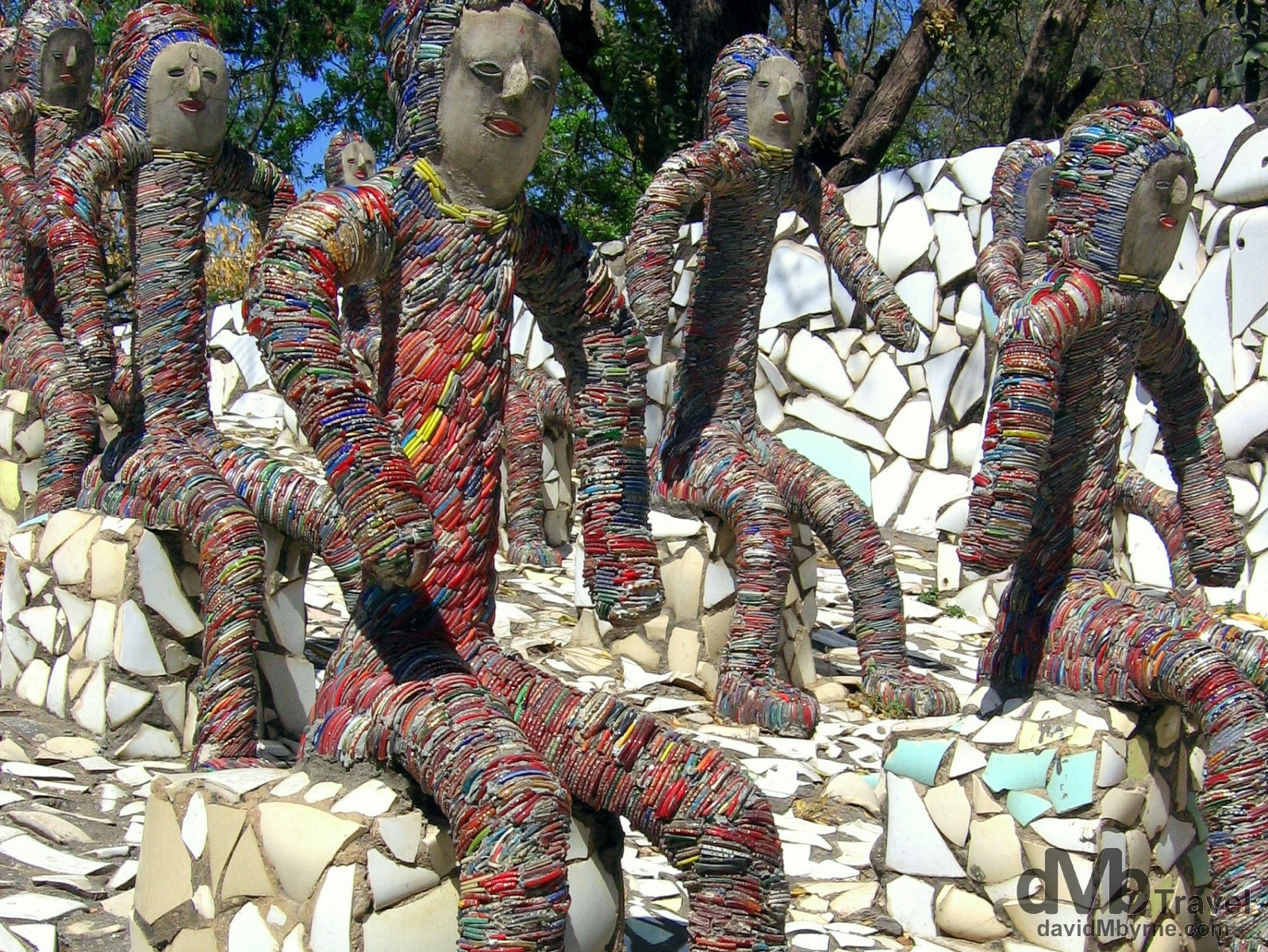 The Chandigarh Rock Garden has been praised internationally for its ‘artistic ingenuity.’ Yep, Nek certainly was empowered with a creative imagination, not to mention a lot of spare time. The Rock Garden, Chandigarh, Punjab, India. March 23, 2008.

Chandigarh
When the Brits pulled out of India in 1947 the Punjab region of the country was partitioned to create Pakistan. After the partitioning, Punjab’s former capital of Lahore fell on the Pakistani side of the divide, leaving Punjab without a capital. As a result a Swiss-French architect by the name of Charles-Edouard Jeanneret was called in and entrusted with the responsibility of designing and building a capital city, one “symbolic to the future of India, unfettered by the traditions of the past, and an expression of the nation’s faith in the future,” so promised the then Prime Minister Jawaharlal Nehru, India’s first post-British leader. 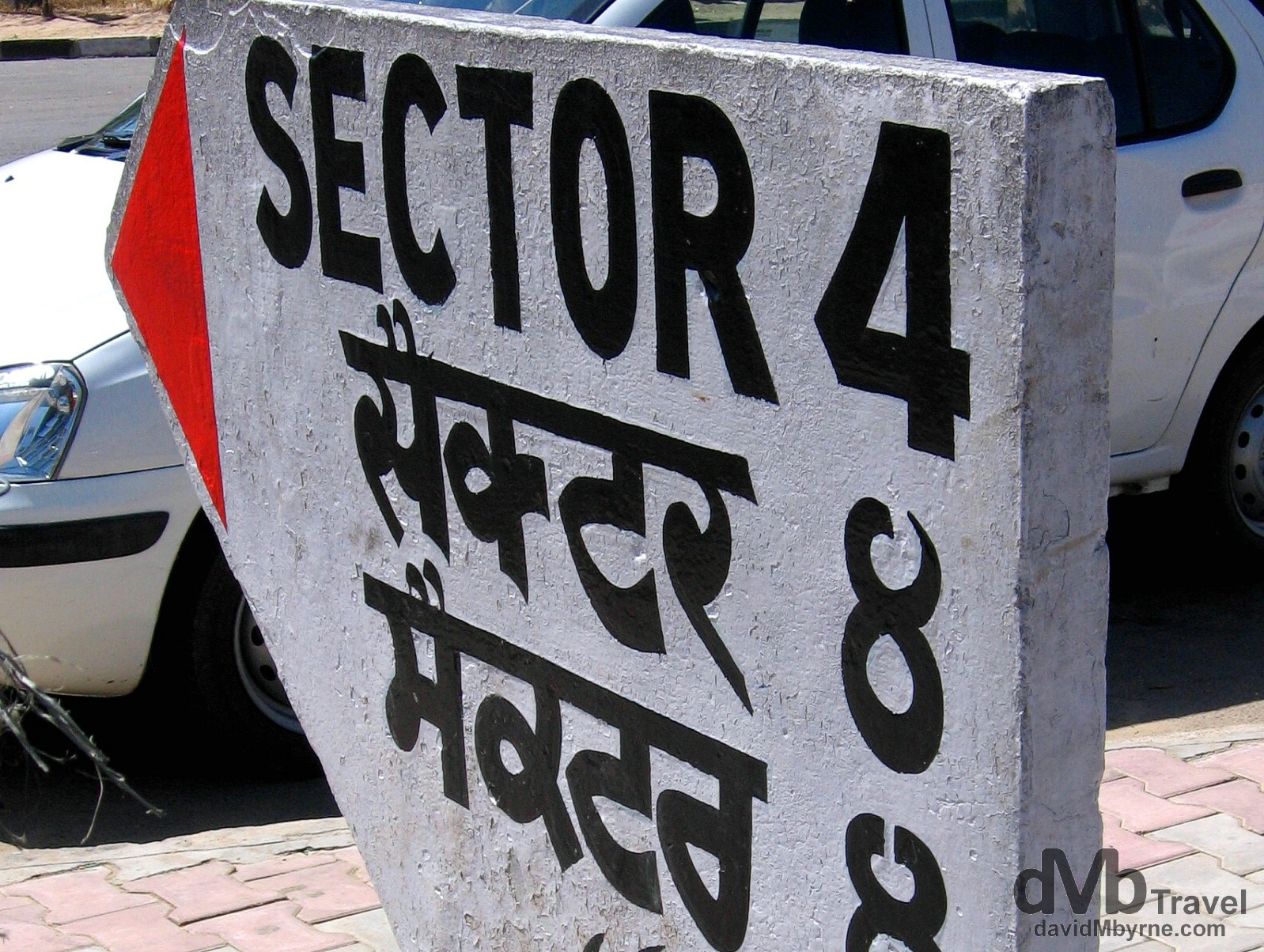 Construction of the ground-breaking experiment in town planning began in 1952, but the city, comprising of over 60 orderly spaced grids, or sectors, wasn’t completed until the 1960’s. Wide, tree lined, & cow-free (again un-Indian) streets separate the sectors and with roadside signs spaced every few hundred metres identifying the different sectors one could surely be excused for believing they were in a military compound or on some other world colony; our accommodation, the palatial Transit Lodge, can be found in Sector 17; The Rock Garden borders Sectors 4 & 5; and Sector 22, clearly the most important sector, is where one will find the off-license. Extensive areas of greenery, a few gardens & tons of colourful shrubbery add to the whole un-Indian feel of the city, making the place feel more North American, less North India – the city layout – but only the layout mind you – actually reminded me of Canberra, the Australian capital, another planned 20th century city. From a map viewing and walking point of view it’s all quite boring and very spread out, but despite its aesthetic shortcomings the city residents are quite proud of their home – it’s greener, cleaner and more affluent than other Indian cities of comparable size.

Rose Garden
It’s not just rocks they have in Chandigarh. They have roses too. Lots of them. 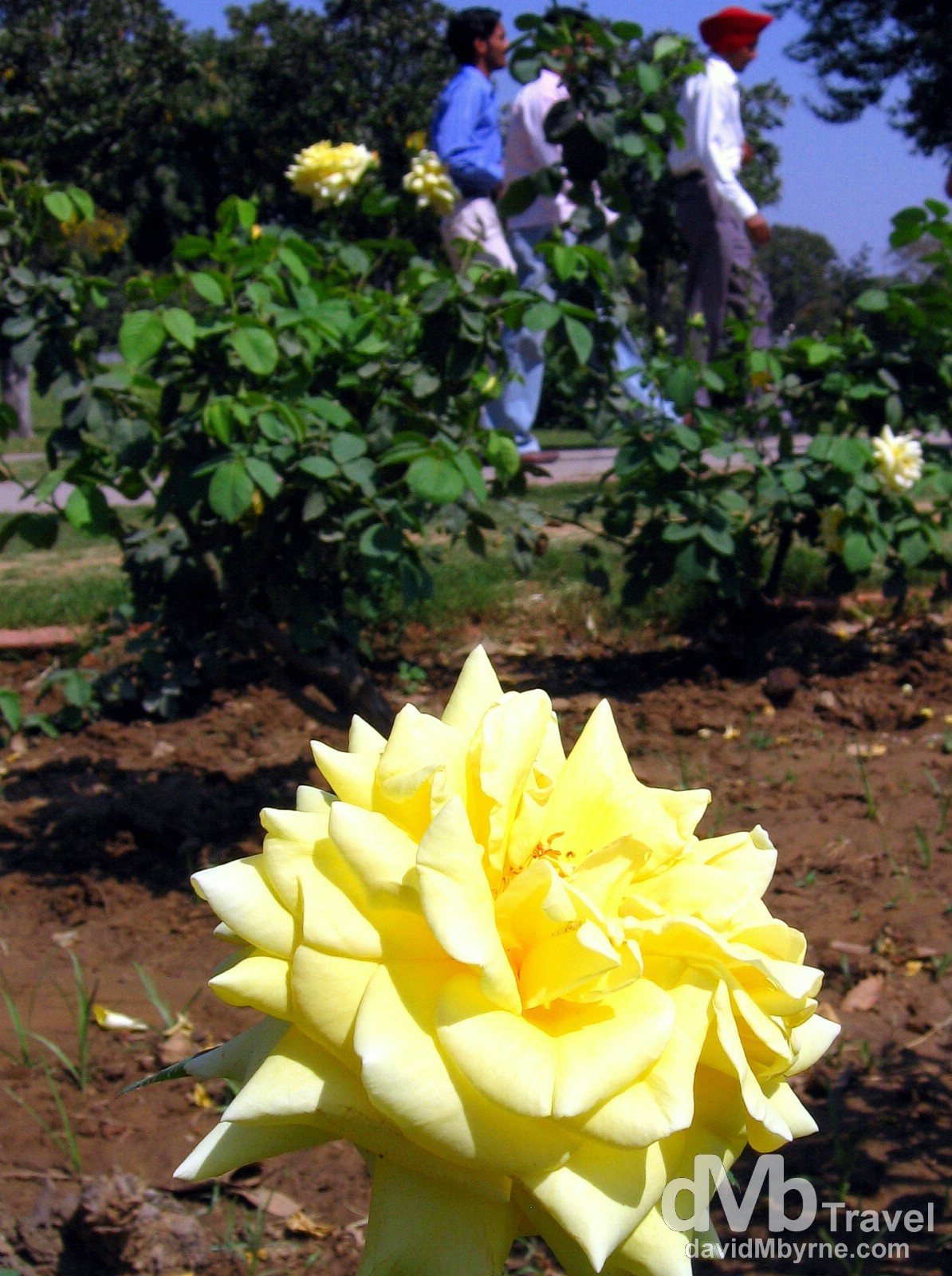 The the 27-acre Chandigarh Rose Garden is the biggest such garden in Asia (so says the sign out front). We’ve spent most of the afternoon today just lazing here on the grass, taking in the sun and killing time ahead of our evening return to Delhi. It certainly doesn’t feel like India in here either – it’s quiet, picturesque, clean, & hassle free. And with attractive, colourful sari-wearing Indians walking sedately among the 1,600 varieties of roses one could be forgiven for thinking they had died and gone straight to Indian heaven. Rose Garden, Chandigarh, Punjab, India. March 23, 2008.

We’ll be shaken out of this oh so Un-Indian bubble when we leave here for the return to Delhi in a few hours. At least we know what to expect in Delhi. This Chandigarh un-Indianness is, in a very unexpected way, unnerving. Is someone playing a trick on us? I think we need to get back to the old reliables of anarchy, noise, dirt, sweat, pollution, touts offering us stuff we don’t need/want.

· No… dignity
The sight from the train window as we rolled out of Delhi yesterday morning of groups of humans relieving themselves on mass by the side of the tracks sort of put us off our Indian Rail breakfast. The fact that there were groups of men no doubt catching up on the local slum gossip as they squatted and tended to business showed us how undignified their existence is. Sad, and a real eye opener.

· No… duty
Chandigarh is our sort of place and if we had – stress had – to live anywhere in India it would probably be here. It’s cleaner, it’s greener, and it’s more affluent than other Indian cities of comparable size, all of which is great. But the clincher for us is that beer is sold here duty free, and unlike other parts of India you don’t draw attention to yourself by simply buying beers in an off-license. It’s all because of the local Sikhs, the turban wearing Indians who make up the majority of the Punjab population. They are a liberal lot who like to have fun; they drink more per-capita than any other race of Indians making them our favourite type of Indians by far. As I said, this is as close to our sort of place that we’re likely to find in a country that isn’t us at all.

· No… one like us
We haven’t seen one fellow westerner while we’ve been here in Chandigarh. Not one. Not even in the Rock Garden (or at the off-license). India is of course big enough to absorb a lot of us without us actually having to bump into each other but still, it’s kind of unusual not to see another western face, especially considering the Rock Garden’s claim as the 2nd most visited site/attraction in the country.

· No… rocks
Considering its name there aren’t too many actual rocks (a lump or mass of hard consolidated mineral matter) in the Chandigarh Rock Garden. A more apt name would be the ‘Detritus Garden,’ the ‘Broken Pottery Garden,’ or even the ‘Silly Statue Garden’.