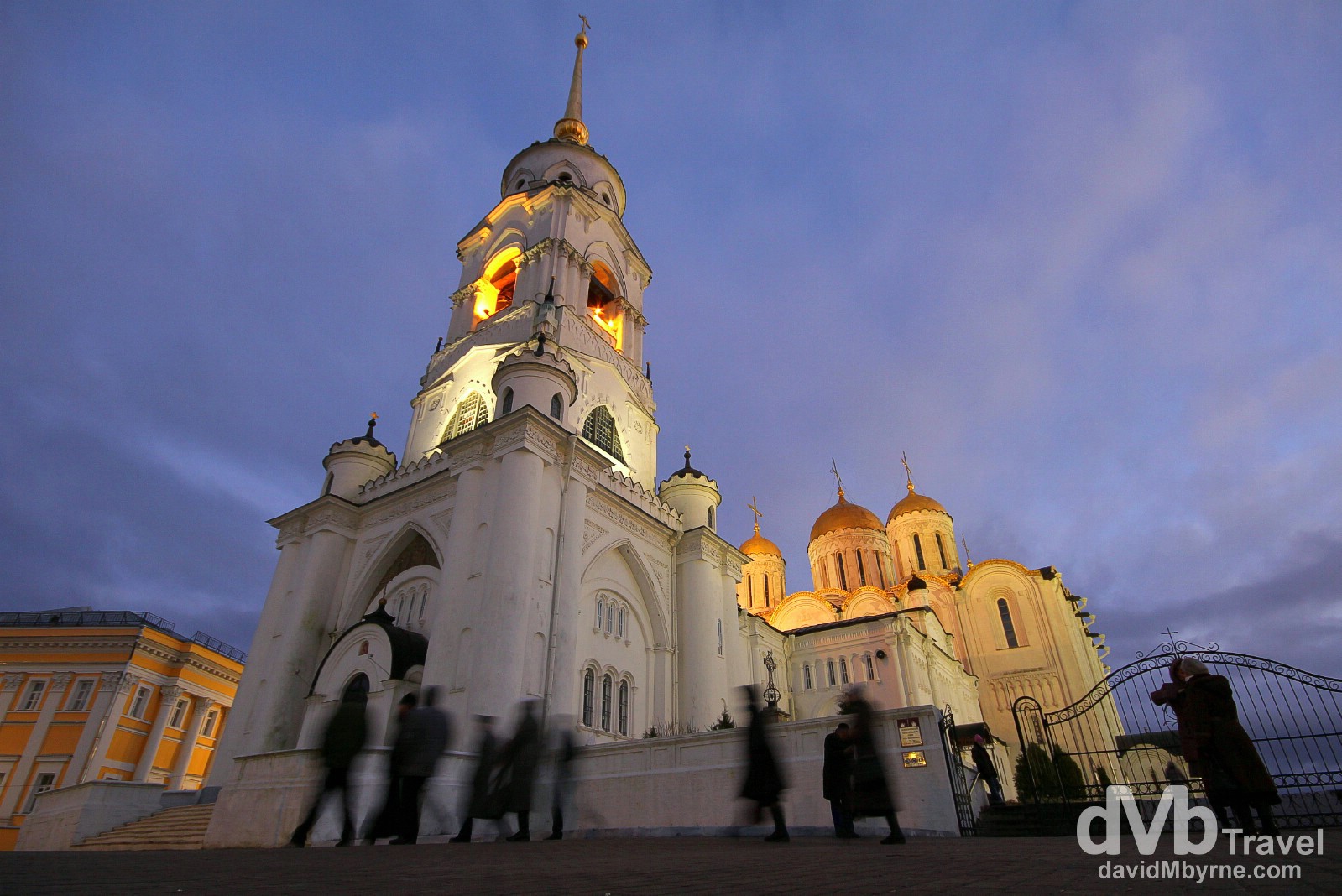 My next Russian port of call on this my second east to west Trans-Siberian odyssey after Nizhny Novgorod (& before Moscow) is the town of Vladimir, one of many cities situated in Russia’s most historic Golden Ring region, the ancient birthplace of the mighty Russian state. In their heyday, Golden Ring cities were political, religious & commercial centres but over time their importance & influence was eclipsed by that of Moscow. But that was then. Today places like Vladimir are sleepy towns relatively close (least one forget this is the biggest country in the world after all) to the Russian capital & ones that offer a nice respite from same. 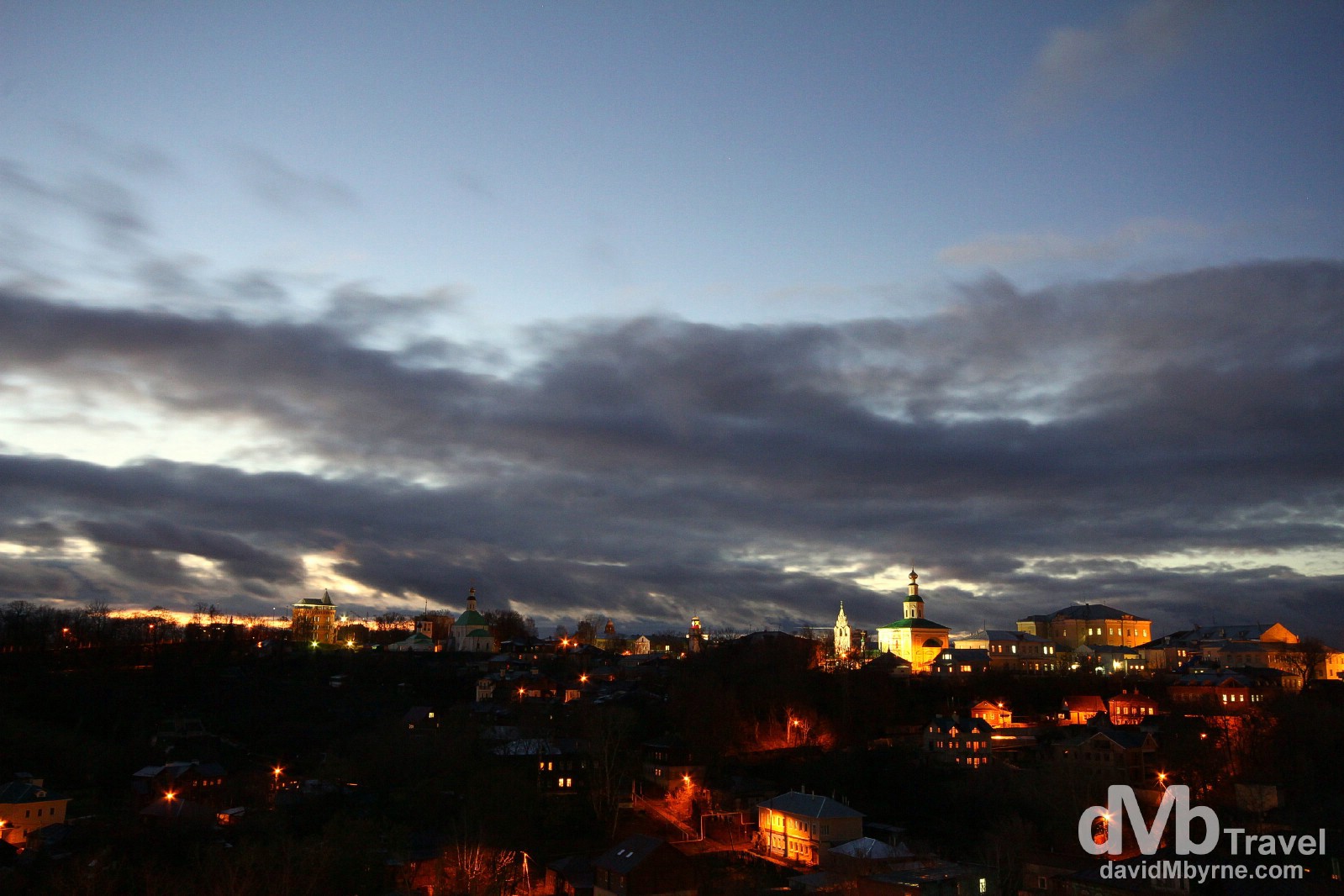 Churches dot the hills of Vladimir in a picture taken shortly after sunset. Vladimir (

Vladimir, some 180 kilometres from Moscow, was founded way back in 1108 & was once the ancient capital of the country. It’s one of the most visited of the Golden Ring cities as it preserves several of the finest monuments of white-stone medieval architecture in Russia along with a number of later buildings from the 16th–20th centuries. It’s main attraction, and reason enough to make a visit here, is the majestic, UNESCO-listed, gleaming white, golden-domed Dormition Cathedral, a.k.a. the Cathedral of the Assumption of the Virgin.

The towering Bell Tower fronting the Dormition Cathedral, a.k.a. the Cathedral of the Assumption of the Virgin, in Vladimir. One of the most historically important Russian Orthodox Churches & holding an important place in the country’s architectural history, Vladimir’s Cathedral of the Assumption of the Virgin is considered a masterpiece by UNESCO. Construction began in 1158 to announce Vladimir as the then capital of Russia. At the time it only had one dome but was still the tallest building in Russia. It was enlarged considerably as part of an 1185 reconstruction when the 4 smaller domes were added, while the neighbouring eclectic-style bell tower wasn’t added until 1810. The musty, dark interior, which feels every bit as old as its listed age, includes a number of ancient frescos from late 12th and 15th centuries. Blue skies in Russia aren’t exactly 10 a penny these days so when the clouds broke just before sunset today I raced down to cathedral in a bid to get this shot. Taken just after dusk, the lighting was nice helped by the lights of the cathedral which were turned on just as I was setting up the shot. Vladimir, Russia. November 16th 2012.

The ancient city of Vladimir, founded in 1108 by the Kiev Prince Vladimir Monomach, contains an important group of religious and secular monuments. The Cathedral of the Assumption (1158) was intended by Vladimir Monomach’s son Andrei Bogolyubskii to be the religious centre of all Russia. It was built in the town Kremlin and is a single-domed structure constructed on six piers: the three naves are surmounted by a delicate drum and a helmet dome. It is 17.7 m wide by 22 m long and 32.3 m high overall. The facade is divided into five sections by embedded columns and is notable for its carved reliefs. The interior decoration is important in Russian art. Most of the 12th-century frescoes were destroyed by Mongols in 1238, but new mural paintings were added in 1408 by the master painters Andrei Rublev and Daniil Chernii, in particular the famous Last Judgement . The iconostasis is a fine Baroque example of 1774.

– UNESCO commenting on the White Monuments of Vladimir & Suzdal