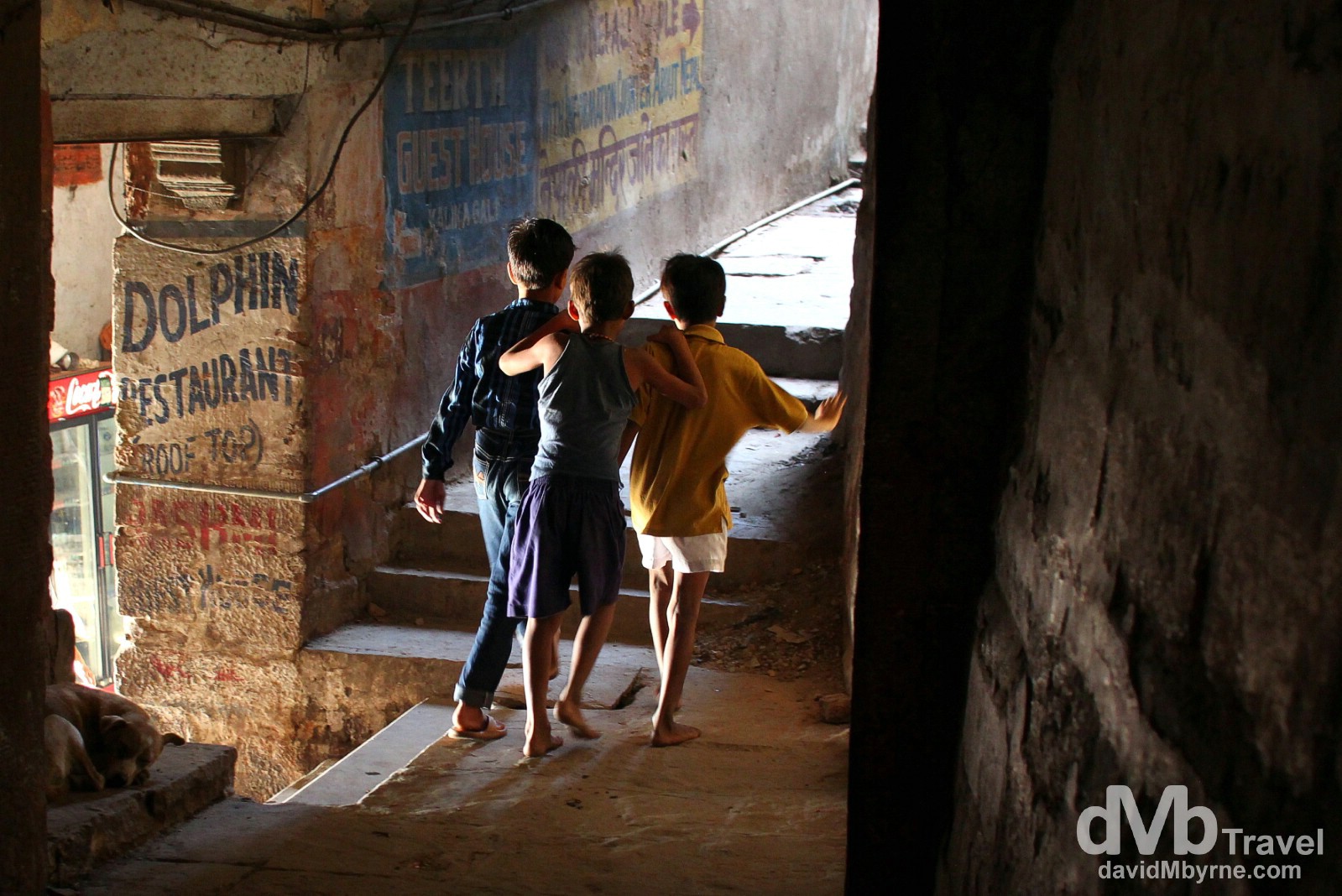 When I decided to return this year to India, I did so with the city of Varanasi in mind. Yes, it’s as manic and overbearing as any Indian city, an unbridled mess that is one, if not the dirtiest city in India (and it has some pretty steep competition). All that said, to get the chance to wield a camera there one more time was reason enough for a return to India for me.

Older than history, older than tradition, older even than legend, and looks twice as old as all of them put together. 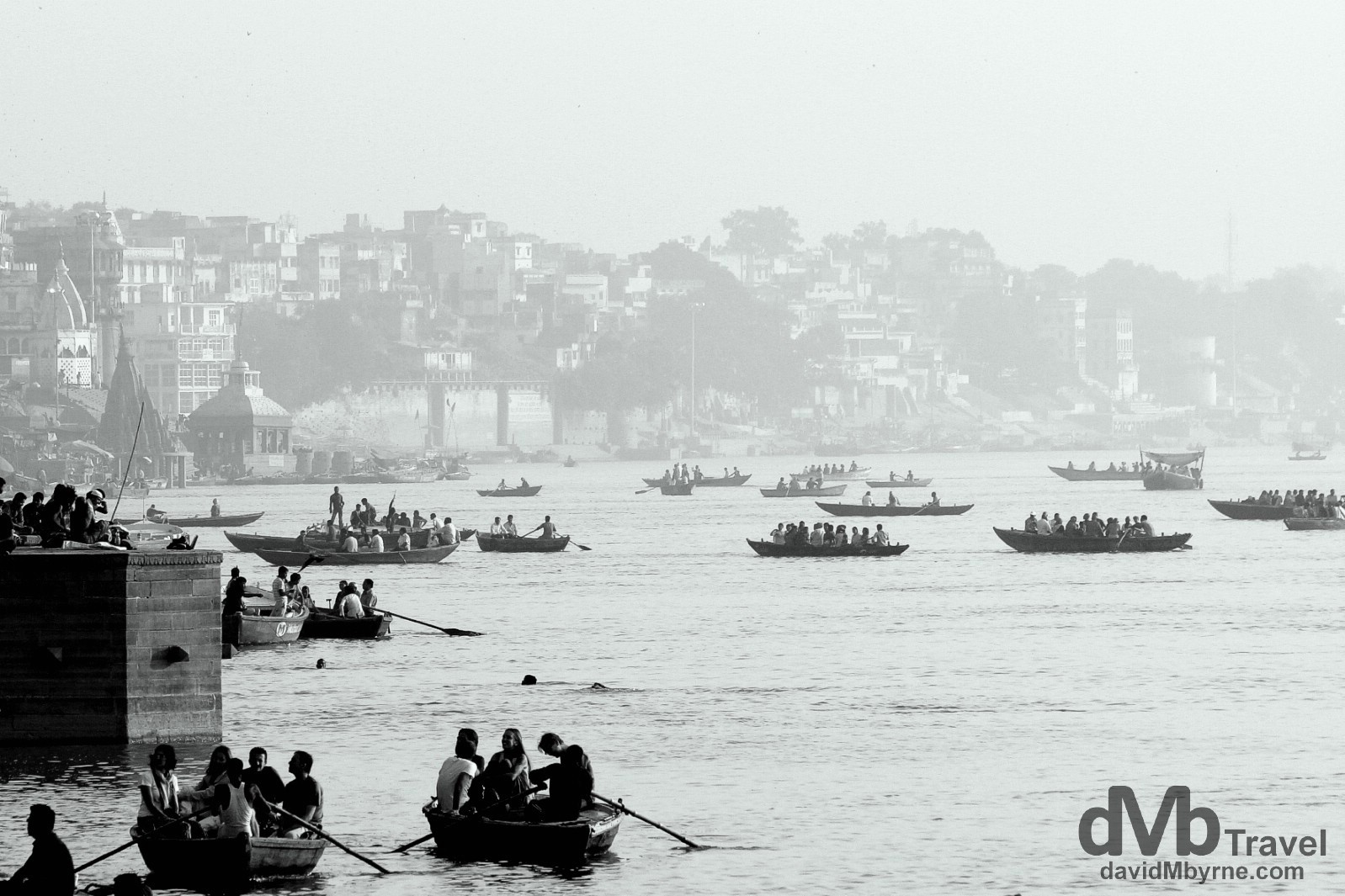 Boats at sunrise on the Ganges River in Varanasi ( 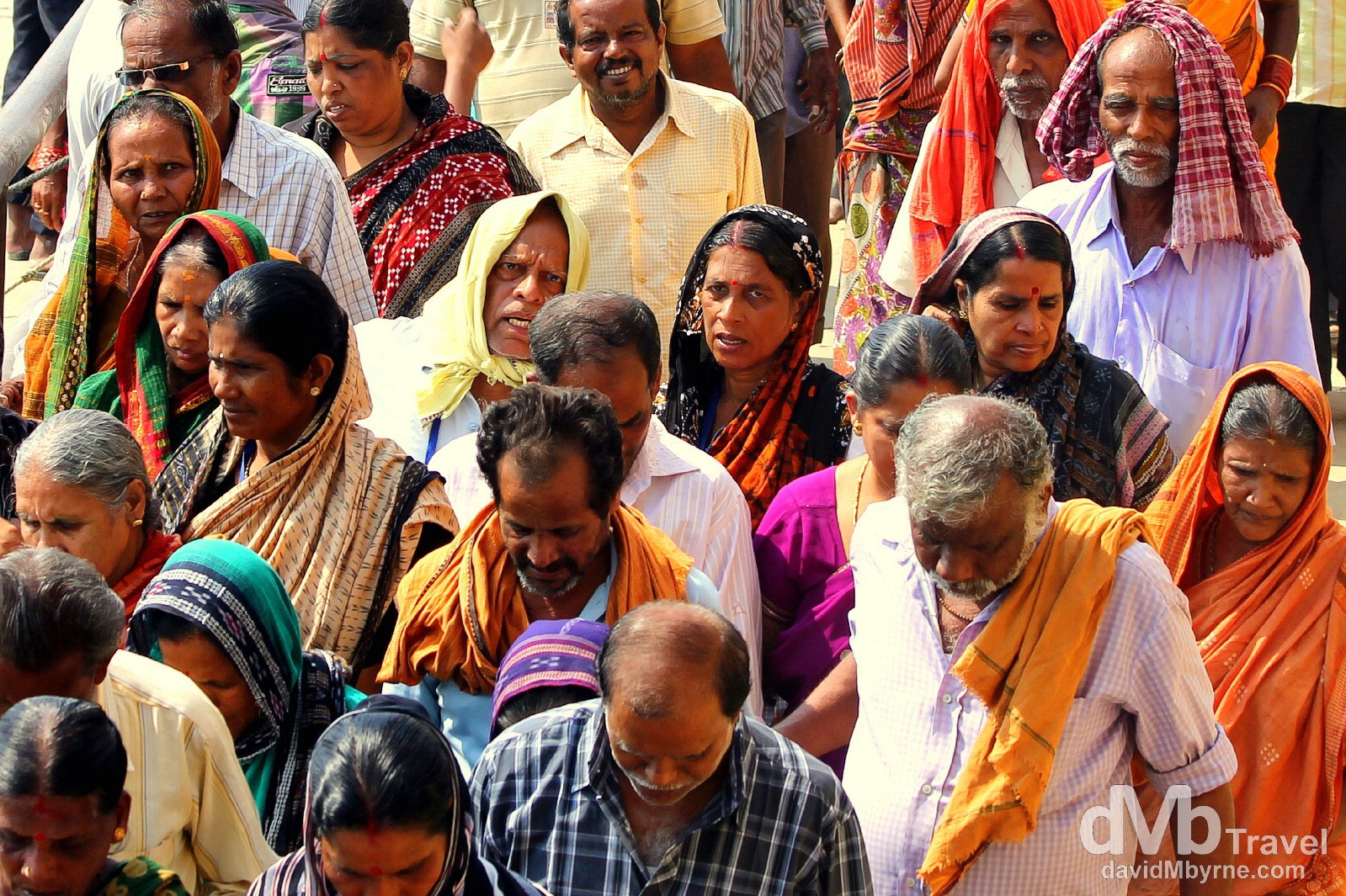 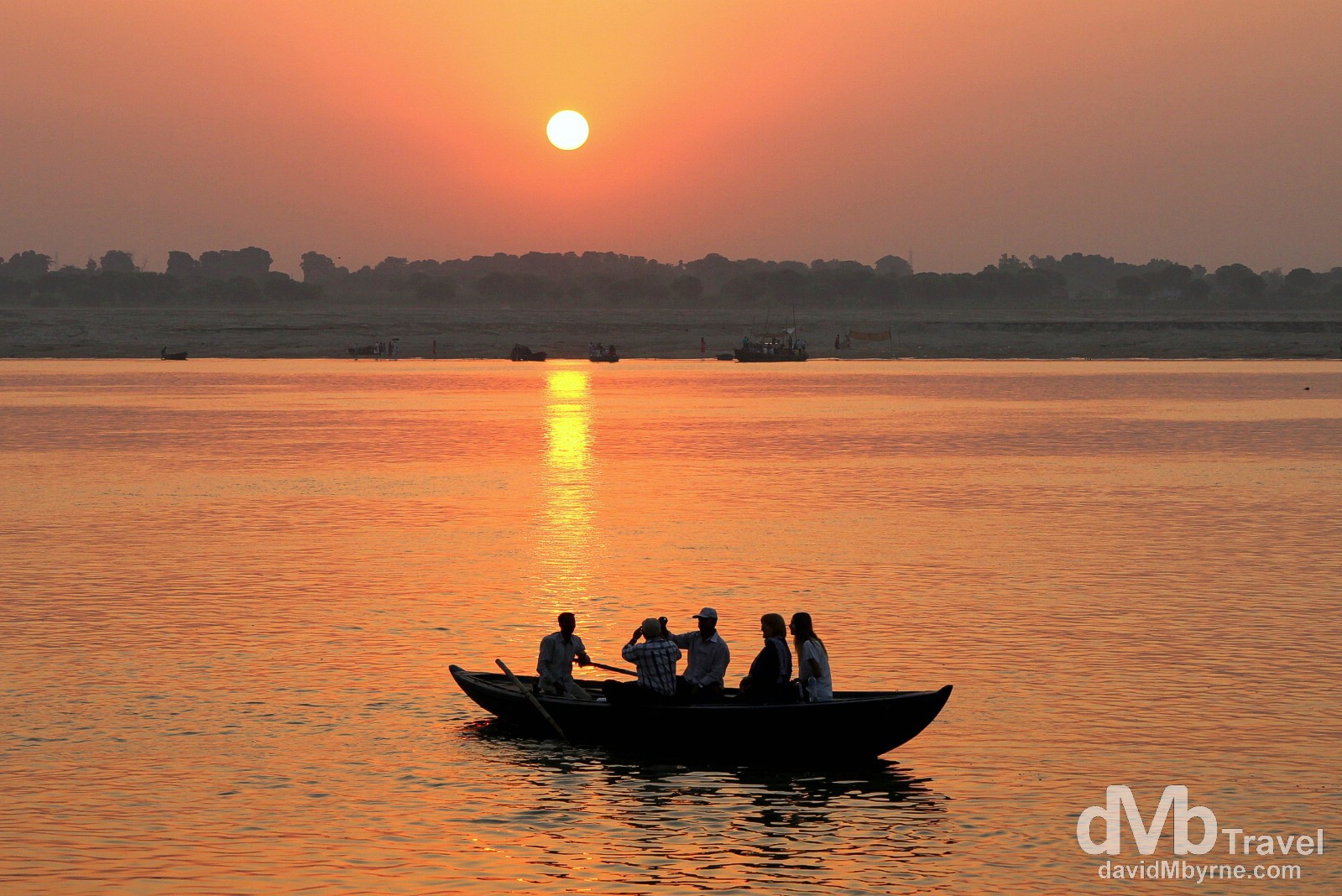 Varanasi, the Hindu holy city by the sacred myth-laden River Ganges, is the centre of the Hindu world (it was said to have been founded by the Hindu God Shiva) and one of the oldest cities on earth, having a religious history stretching back to the 6th century BC. It’s also a unique, world-class people-watching destination. The everyday activity on the ghats lining the river – people bathing, washing clothes, doing yoga, offering blessings, selling flowers, getting a haircut or a shave, a massage, playing cricket or just hanging out – is traditional India at its most vibrant, colourful & picturesque. Photo opportunities abound. And then some. 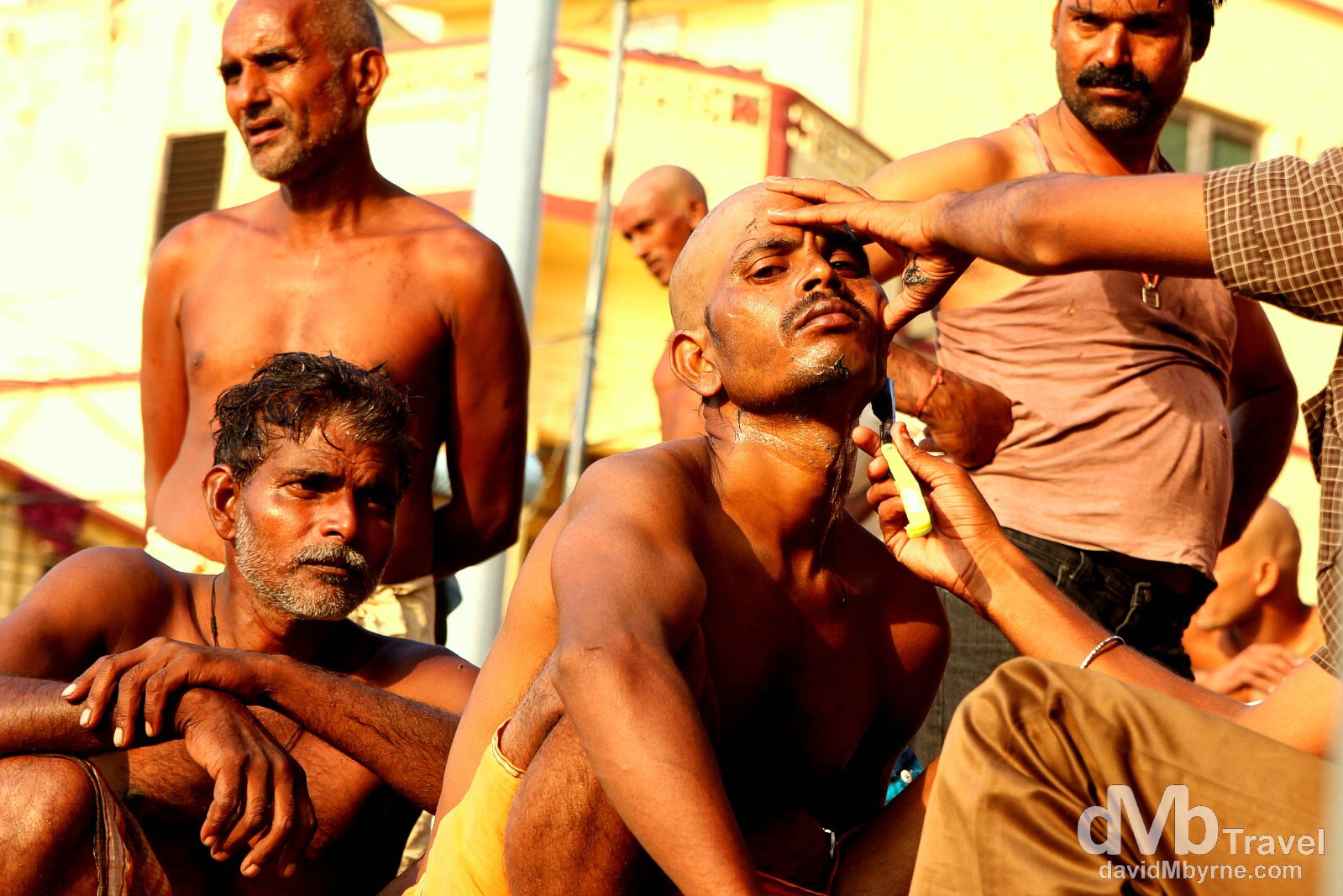 A sunrise shave on the steps of a ghat by the Ganges River in Varanasi, Uttar Pradesh, India. October 13th 2012.

India, a country of 1.3 billion people, 82% of which are Hindus, has thousands of Hindu holy sites. Seven, a number with special significance in Hinduism, of these are sacred cities, major pilgrimage centres, with Varanasi the most revered of the lot – it’s the chosen final pilgrimage destination for the very sick or elderly as it is said dying in this sacred city releases a person from the Hindu cycle of rebirth. Pilgrims come here to bathe in the Ganges, regarded by them as amrita, the elixir of life, believing that by doing so will bring purity to the living (cleansing of the soul) and salvation to the dead.

Whether it does indeed cleanse their souls or not, I doubt it cleanses much else. Thirty large sewers in the Varanasi area alone are continually discharging into the river & its water is so polluted that it’s certified septic, meaning no dissolved oxygen exists. It’s a cesspit of nastiness and to see people washing and swimming in it, all in the name of religion, makes me, a nice, clean, freshwater-advocating soul, shudder. 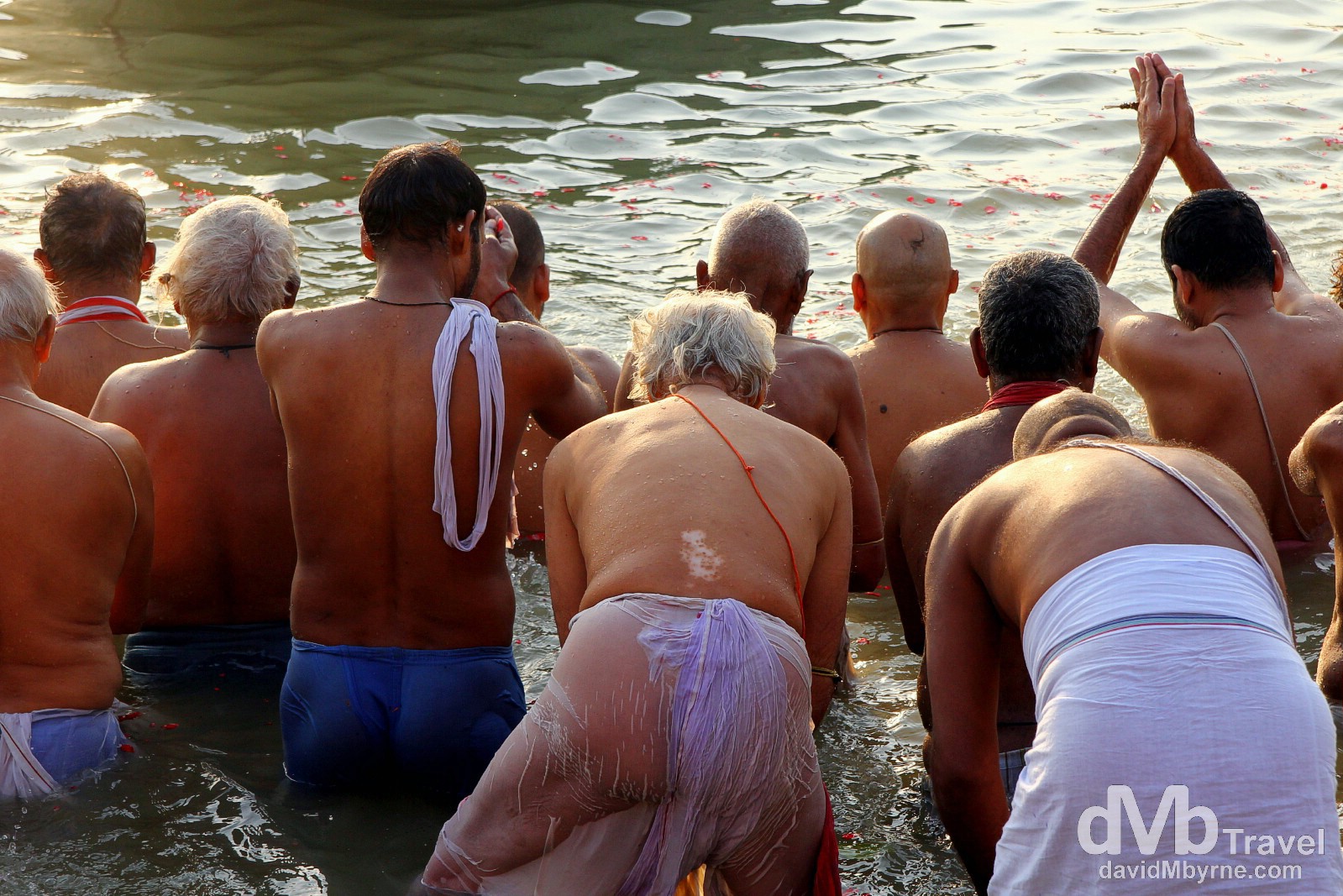 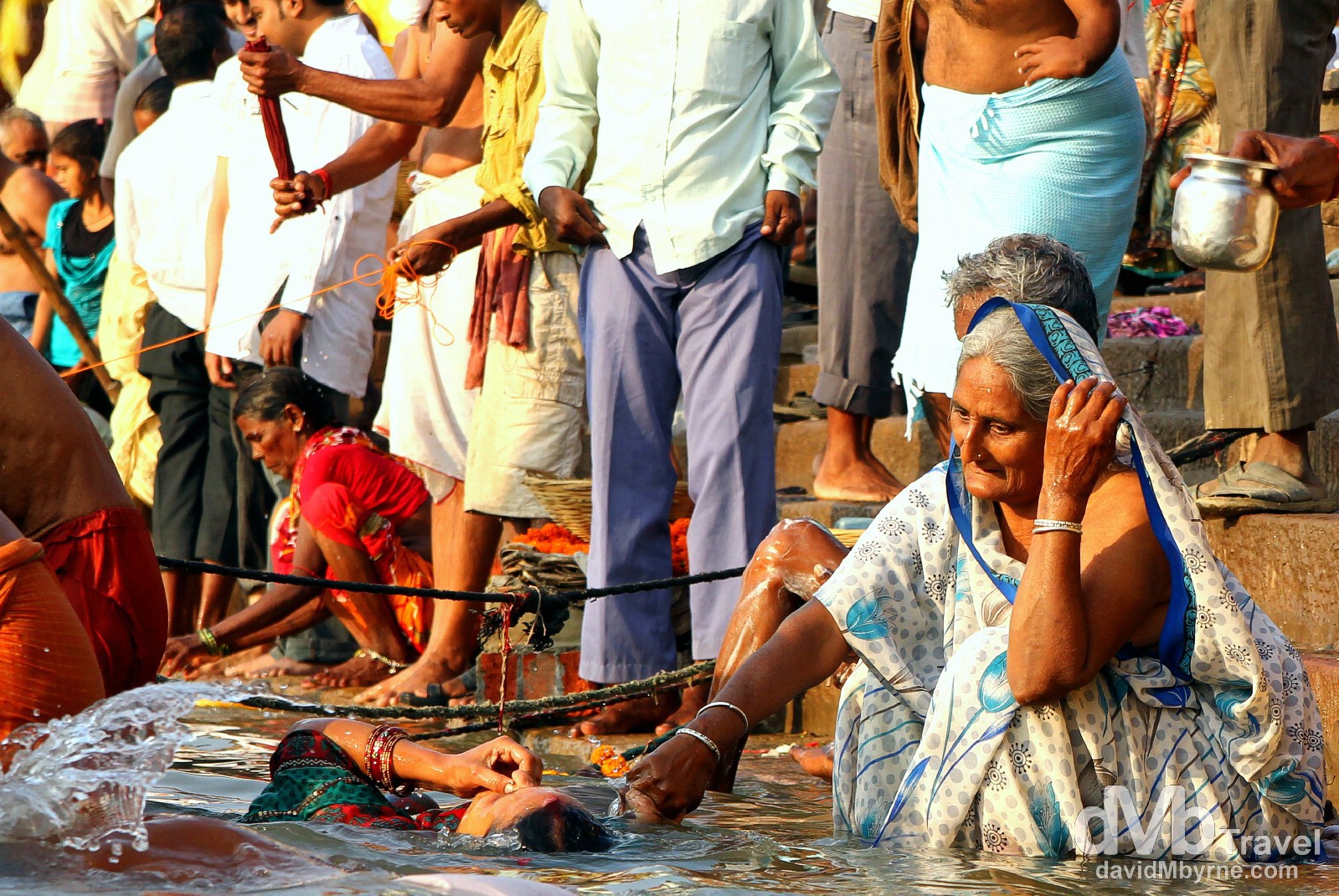 Bathers in the waters of the Ganges River by the Dashaswamedh Ghat, Varanasi, Uttar Pradesh, India. October 13th 2012. 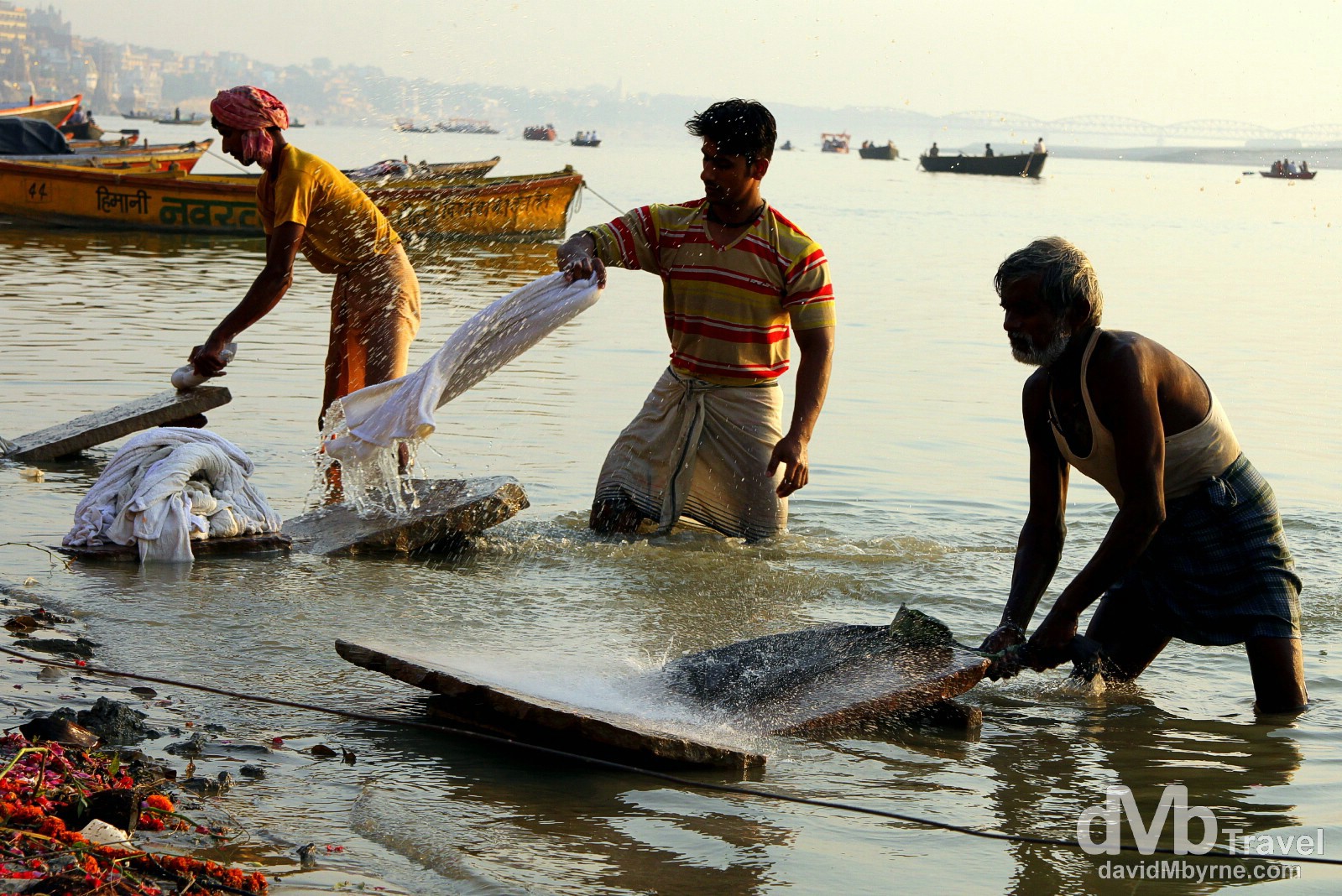 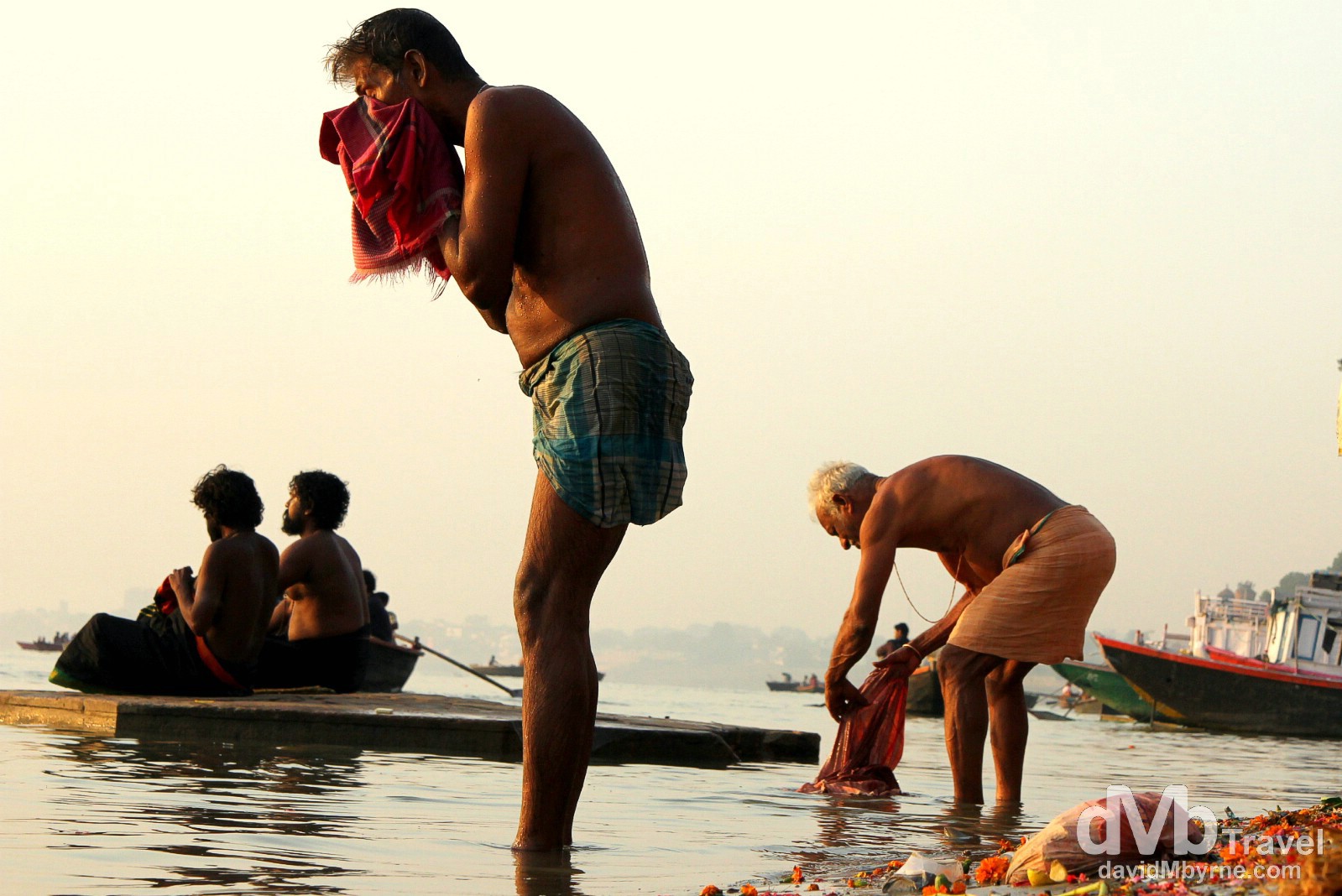 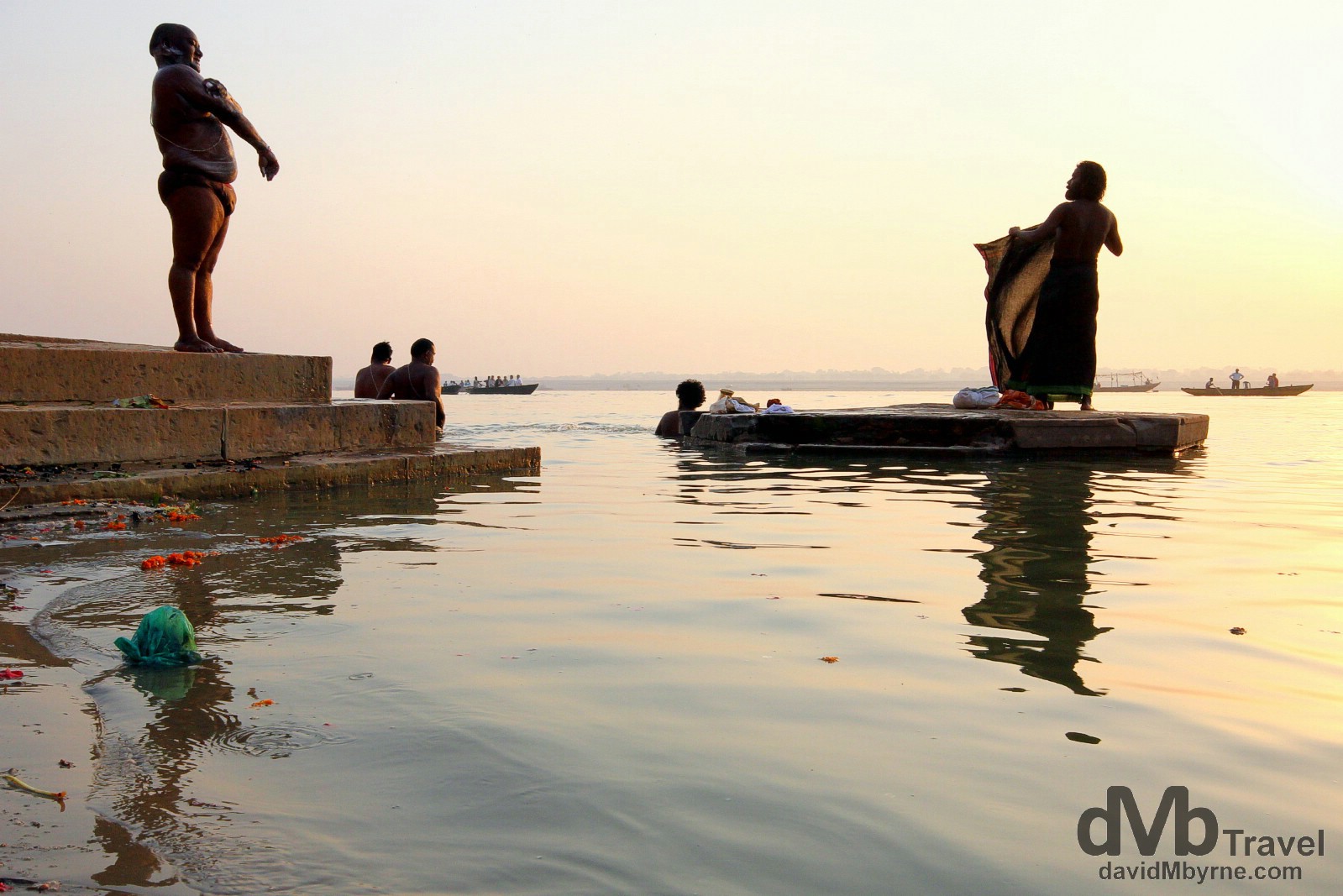 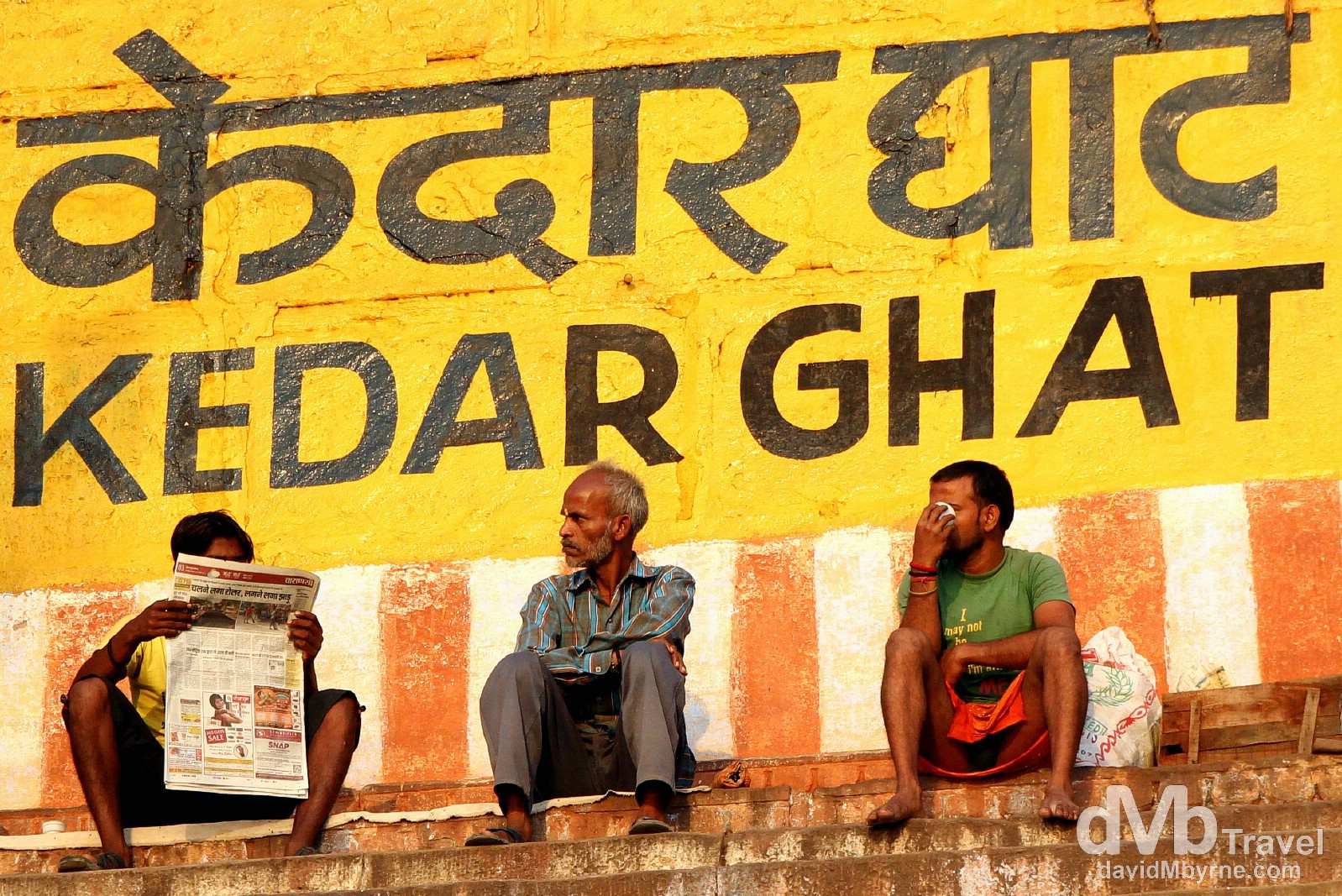 Sitting by the Kedar Ghat by the River Ganges in Varanasi, Uttar Pradesh, India. October 14th 2012.

Old City
In a city that looks and feels (and is) as old as Varanasi, it’s hard to believe there is actually an Old City. But there is. It’s a disorientating labyrinth of atmospheric & narrow – too narrow for vehicular traffic – lanes leading away from the ghats at the rivers edge. The Old City is actually only a few hundred years old but because of all the claustrophobia, noise, dust & mayhem it looks, feels & smells much, much older. It’s a great place to get lost (doing so is virtually guaranteed) and an even better place to bring a camera. 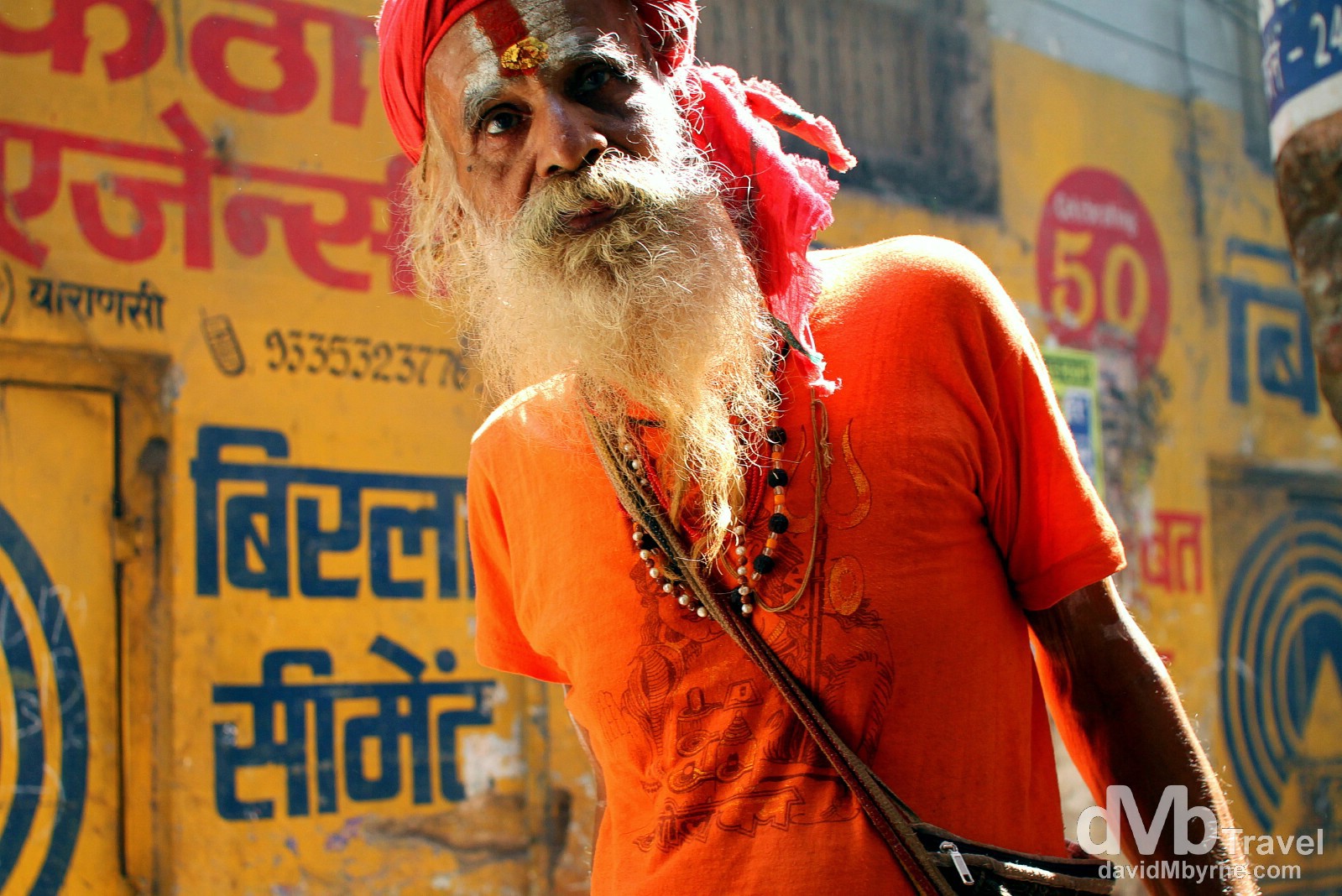 A sadhu, an ascetic Hindi holy man, in the narrow lanes of Old City of Varanasi. A sadhu devotes his life to the religion, wandering here & there on the trail to religious salvation. This sadhu is somewhat overdressed – they are normally half-naked, smeared in dust, with hair & beard matted. But say what you will, all that dust & unkempt hair is oh-so photogenic. The lighting at this particular corner of the Old City awesome & I stood here for a while hidden by the corner waiting for subjects, illuminated from behind, to come into view. Old City of Varanasi, Uttar Pradesh, India. October 13th 2012.

Again the lighting here was awesome so I stood here for a long while waiting for subjects – men, ladies, sadus – to pass. Of all the subjects that obliged I like this picture of three mischievous boys the most. In the lanes of the Old City, Varanasi, Uttar Pradesh, India. October 14th 2012. 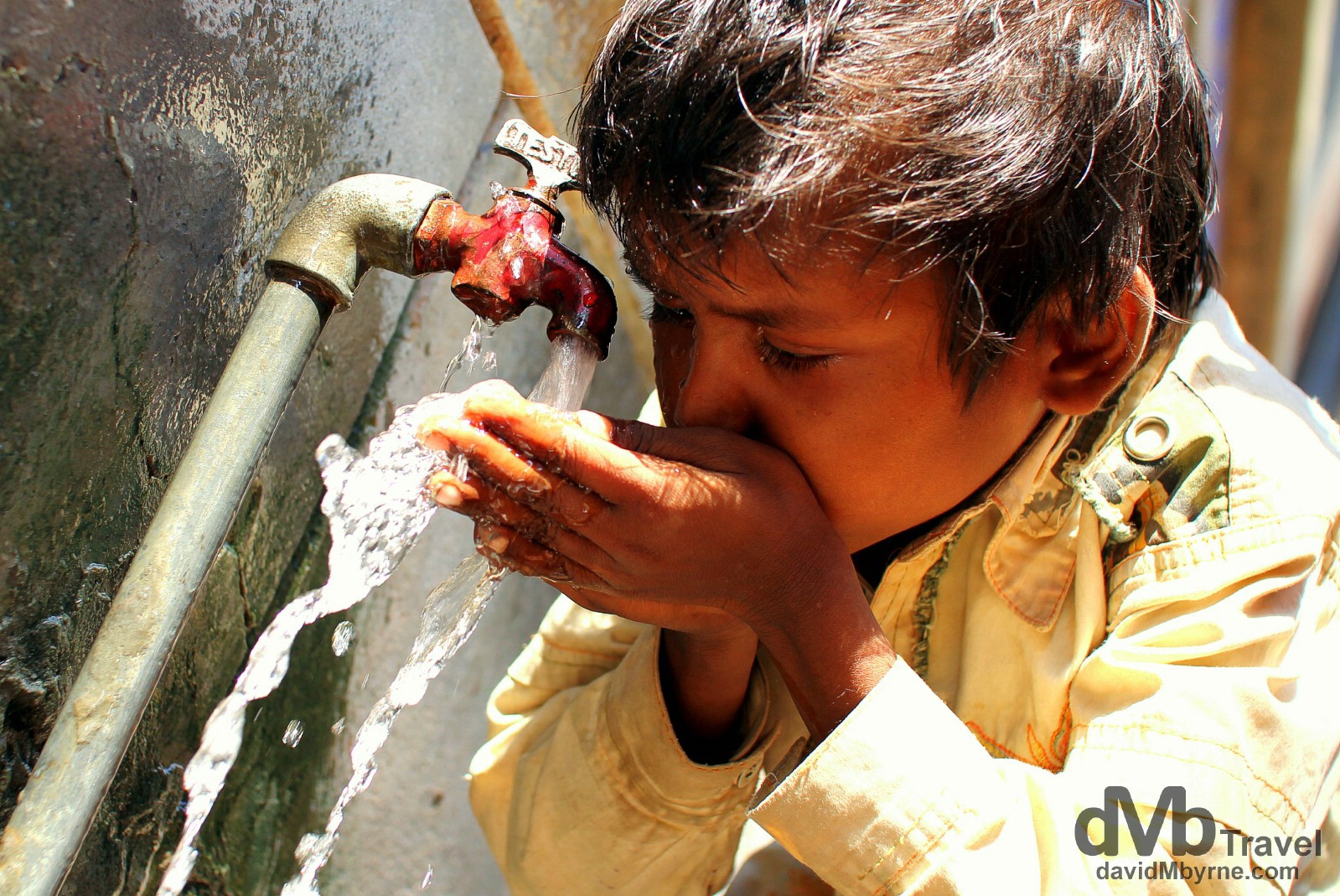 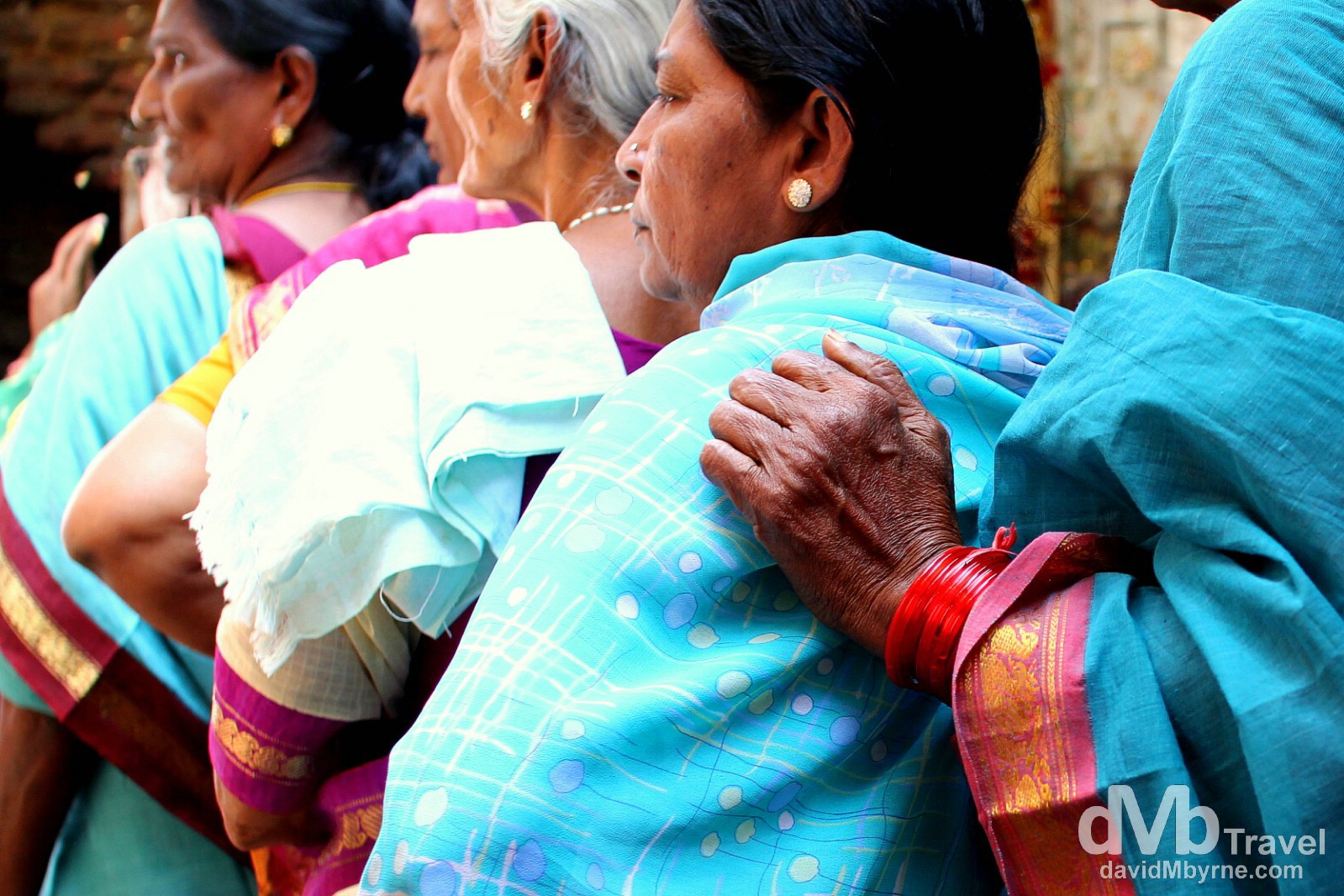 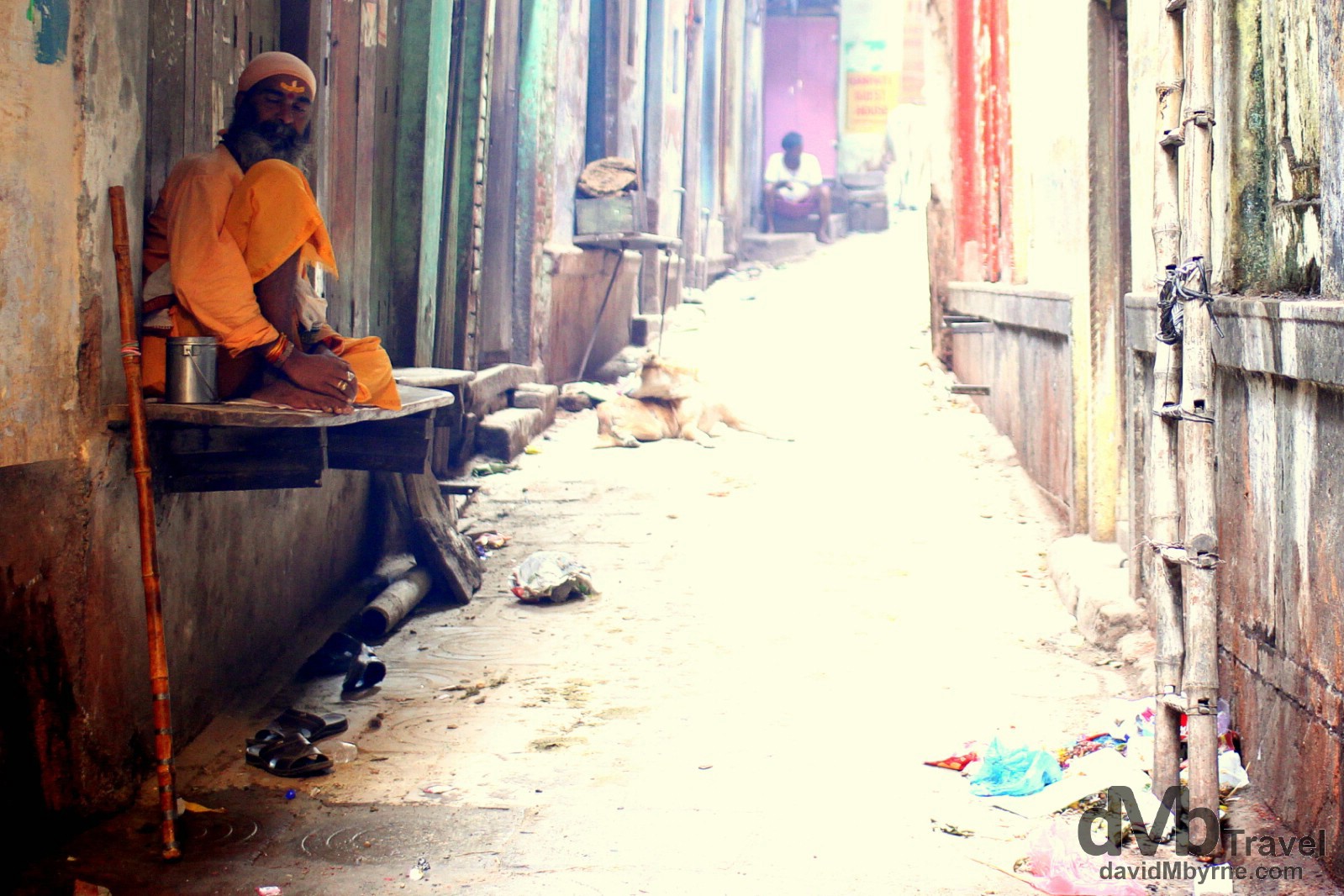 A sadhu sitting in a lane in the Old City of Varanasi, Uttar Pradesh, India. October 14th 2012.

Third Time’s a Charm
On my last, second visit to Varanasi, a three-day stint in March 2008, I captured some of my very favourite travel pictures. That visit still remains one of my fondest photographic experiences. This time, & with having such high expectations upon my return, I was a little disappointed photographically with Varanasi (maybe I should have left well enough alone). While I got quite a few images I liked this time around I just didn’t find the overall Varanasi photography experience as satisfying as I remember it being. The city, as manic and overbearing as any Indian city, wasn’t as bustling. It wasn’t as colourful. It wasn’t as vibrant. It wasn’t as (insert suitable adjective here). In a nutshell I didn’t find it as photogenic. And it wasn’t for the want of trying. I was down by the river for sunrise two mornings in a row, was also there well after nightfall & in-between I wandered the maze of ramshackle, atmospheric lanes in the Old City. Upon reflection I did capture quite a few images I liked but at the time of capture I couldn’t help but feel underwhelmed. Silly really.