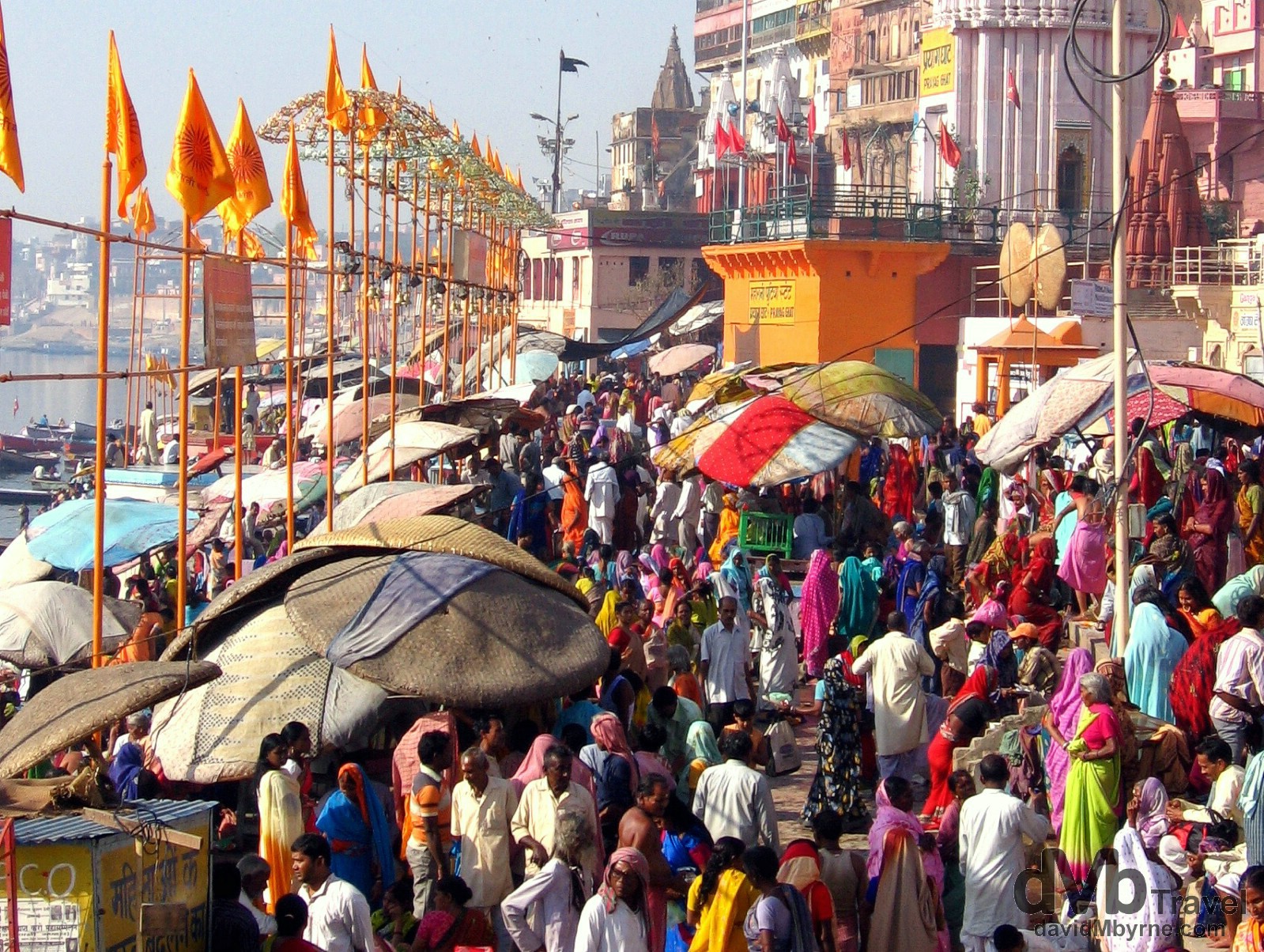 Varanasi, the Hindu holy city by the sacred River Ganges. This place is the centre of the Hindu world (it was said to have been founded by the Hindu God Shiva) and one of the oldest cities on earth, having a religious history stretching back to the 6th century BC.

Older than history, older than tradition, older even than legend, and looks twice as old as all of them put together. 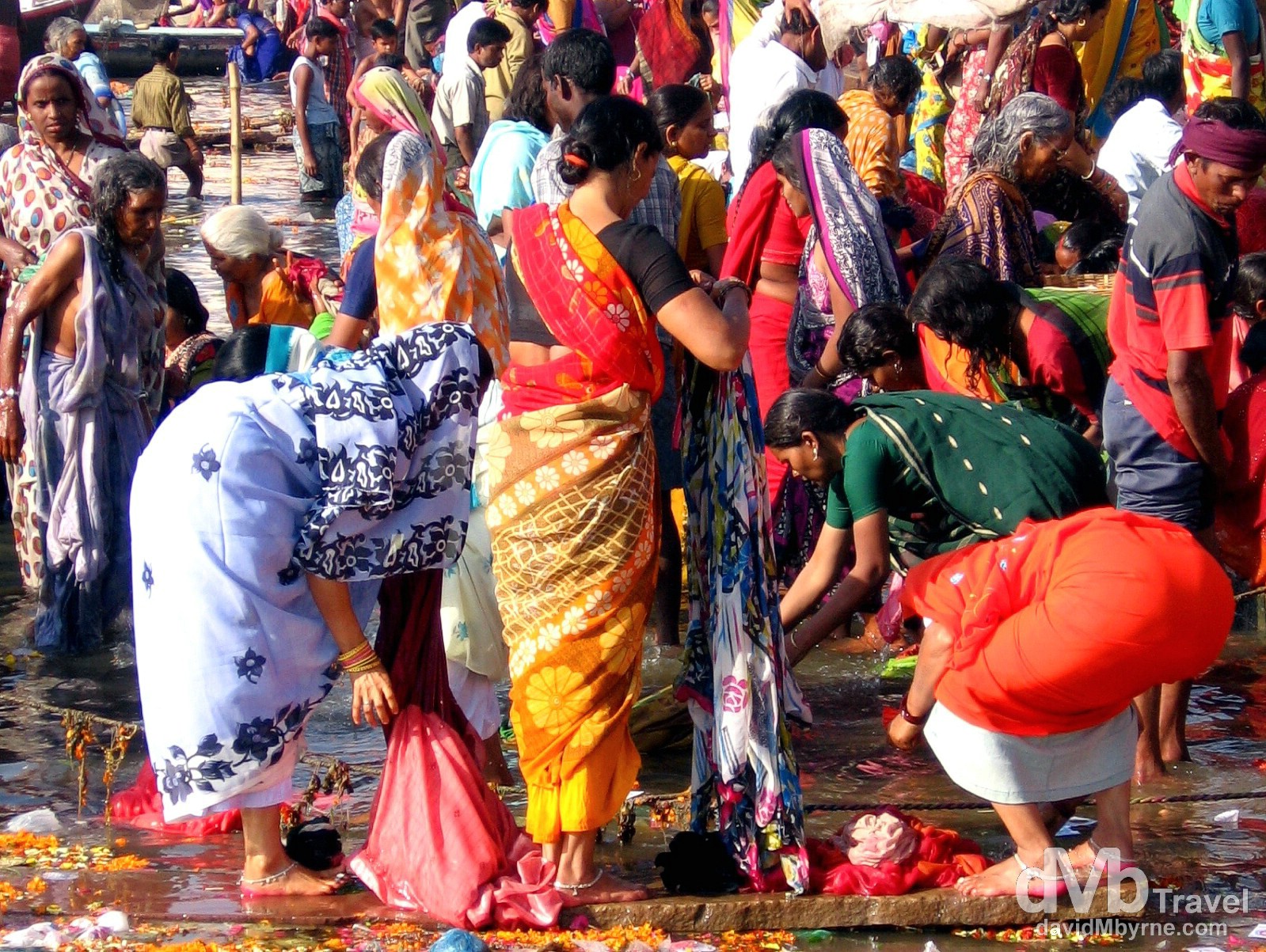 Varanasi is classed as the holiest of Hindu tirthas, “crossing places” that, they say, allow the devotee access to the divine and enable gods and goddesses to come down to earth. Hindus regard the Ganges as amrita, the elixir of life, and pilgrims come here to bathe in the river believing doing so will bring purity to the living (cleansing of the soul) and salvation to the dead. Whether it does indeed cleanse their souls or not, we doubt it cleanses much else – the river, one of the most polluted rivers in the world, is scummy with rubbish, effluent, heavy metals, chemicals and human body parts (honest). It is a cesspit of nastiness and to see people washing and swimming in it, all in the name of religion, makes us nice clean, freshwater-advocating Irish boys shudder. 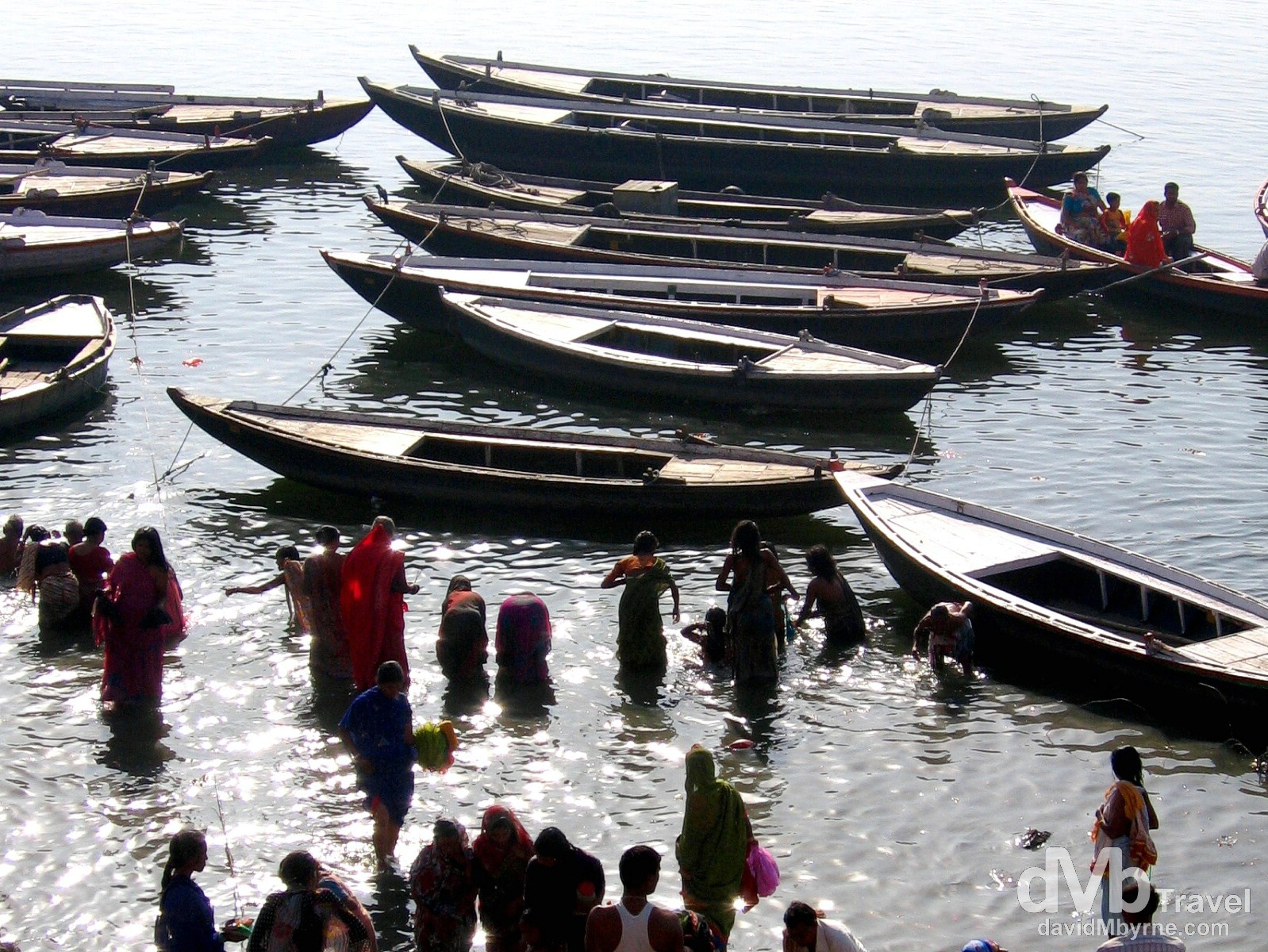 “How much would I have to give you to jump in there, Lad?” is a question I posed to Pat a few days ago as we watched unknown objects floating past us and mosquitoes buzzing around us.

I think Pat was too shocked to answer. To be honest I think he has been in a mild state of shock since we got here, even though I forewarned him what it – India and specifically Varanasi – was going to be like. He’s having difficulty with the unbridled mess of the place, the pungent smell of urine, the feces (animal and human) one must mind not to step in, the mosquitoes, the heat, the pollution and the masses. Oh, and the touts. How can I forget the touts?

We’ve had those lines shouted at us incessantly for days. Another one is,

“Hello Sir… hashish?… best quality,” spoken in hushed tones and tended not to be shouted from afar like the other propositions.

It’s all part of the westerner in Varanasi experience, one that ends for us in a few hours. We’ve been here now since Sunday evening. It’s now 1 p.m. on Wednesday and we’re sitting in the rooftop restaurant of the Puja guesthouse, looking out over the Ganges – it looks clean from up here. 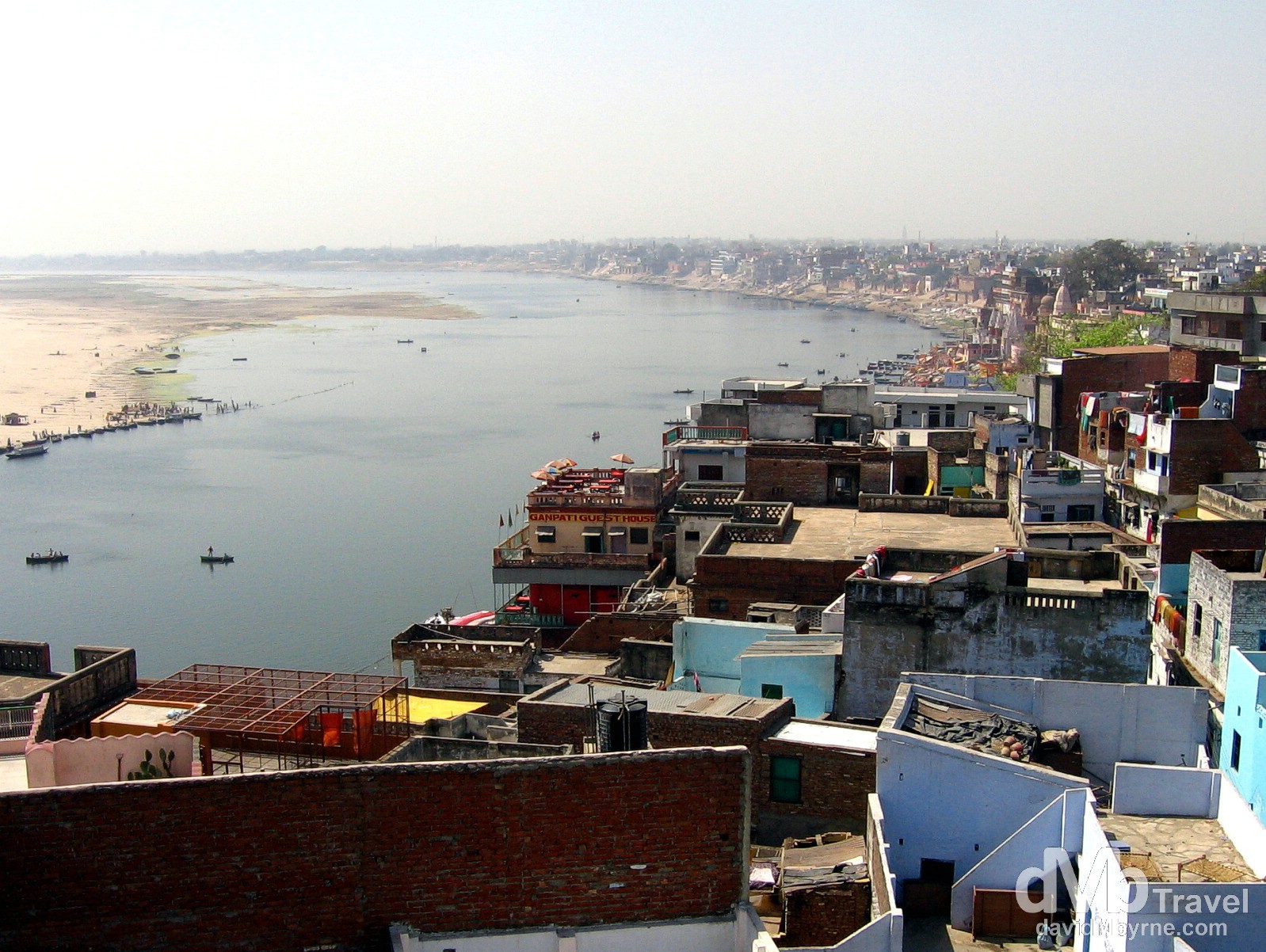 A view of Varanasi and the sacred River Ganges from the rooftop of the Puja guesthouse. Varanasi, Uttar Pradesh, India. March 17, 2008.

We’re waiting to leave for the train station to get the 5:35 p.m. train to Delhi, one that has two sleeping berths reserved in our names (we hope). We’ll get to Delhi in the morning and start to run the gauntlet of Delhi touts which won’t, we predict, be difficult as we’re sort of indifferent to touts by now, even notoriously persistent Indian ones. Our path has been pretty much set since we left Beijing in mid-February but after a few days in Delhi we’ll have decisions to make. Stay in India (Goa maybe) or leave for say Oman. Egypt even. Goa looks the likeliest option right now. Pat’s longing for a bit of beach time, something he reminds me of every few hours as he looks disconsolately out over Varanasi from the comforts of our guesthouse rooftop restaurant.

The riverbank of the Ganges in Varanasi is built high with 18th & 19th century pavilions, terraces and palaces, all lined with a chain of Ghats, stairways leading down to a landing on the water. Each of the Ghats has an associated place of worship (a nearby temple for example) where the devotees come to pray, before dunking themselves in the river. This is picture shows riverside activity by the Dashaswamedh Ghat, Varanasi’s busiest bathing Ghat. Ghats have been used in India for centuries, primarily for worship, but also for bathing and washing clothes. They are also used for the final ritual of cremation and some of Varanasi’s Ghats are solely used for this purpose. Due to its importance to Hindus, anyone who dies in Varanasi attains instant enlightenment. Therefore widows of the elderly come here to seek refuge or to live out their final days. Those who die here are deemed ‘lucky’, but those who can afford to get cremated at one of the cities cremation Ghats are deemed even more fortunate. Mahashamshana Ghat is the pre-eminent cremation Ghat in the city and seeing bodies, as we did, being cremated so publicly has always fascinated westerners. A sobering experience Pat called it, and a sobering experience it is, just like it was for me 5 years ago. Taking pictures at such Ghats is taboo and according to our guidebook producing one while at the Ghat might even provoke hostility, so our cameras stayed firmly in our pockets. No such problems at these colourful bathing Ghats however. Dashaswamedh Ghat, Varanasi, India. Activity by the edge of the sacred River Ganges at the Dashaswamedh Ghat, the busiest bathing ghat in Varanasi, Uttar Pradesh, India. March 18, 2008.

Indian Holiday
Admittedly we haven’t done much here in Varanasi. We’ve walked up and down the river a few times, taking in the sights on the Ghats (stairways leading down to a landing on the water), including the cremation Ghats. We’ve dodged touts, tried to dodge mosquitoes (there are too many of them to have any chance of succeeding, regardless of what repellent is applied) and basically stayed out of the sun. It’s hot here, very hot and we’re trying to get used to it. We’ve happily whiled away the steamy afternoons reading and gazing out at the Ganges from the rooftop restaurant of the Puja guesthouse, ordering cold mineral water and the odd milkshake every now and then. Yes, we’ve taken it easy and we’ve actually felt, for the last 2 days at least, like we’re on holidays, quite an accomplishment in any Indian city. We’re quite proud of ourselves. We doubt it’ll be like that in Delhi. After all, they’ll have beer there.

· Royal Challenge Fail
I hate to say it but Paddies Day was a washout, a dry washout. With beers not easily available in Varanasi we, two Irish boys on St. Patrick’s Day, found ourselves asking around where one could find beer – we supplemented our queries with explanations of St. Paddies day and what it meant for us, explanations that were lost on Hindu Indians. Thankfully it’s not quite prohibition here just yet and thus the place isn’t totally dry. Beer is available, but only if you’re prepared to walk, as we were, to the Indian equivalent of an off-license – a room opening onto the street with a few fridges of bottled beer. Not wanting to be weighted down by beer bottles as we navigated the chaotic, hot, dusty streets of Varanasi on the way back to our guesthouse, we settled on the manageable quantity of three bottles of Royal Challenge each. Even though our beers were, we though, well hidden inside a box, albeit a beer box, we still felt like alcoholics as we walked, getting accosted as we went by joking Indians to share our precious cargo with them.

“Not a chance Guys. It’s Paddies Day and these babies are ours!”

We savored our beers in our room while saluting our patron saint. Paddies Day in Varanasi. Not recommended. 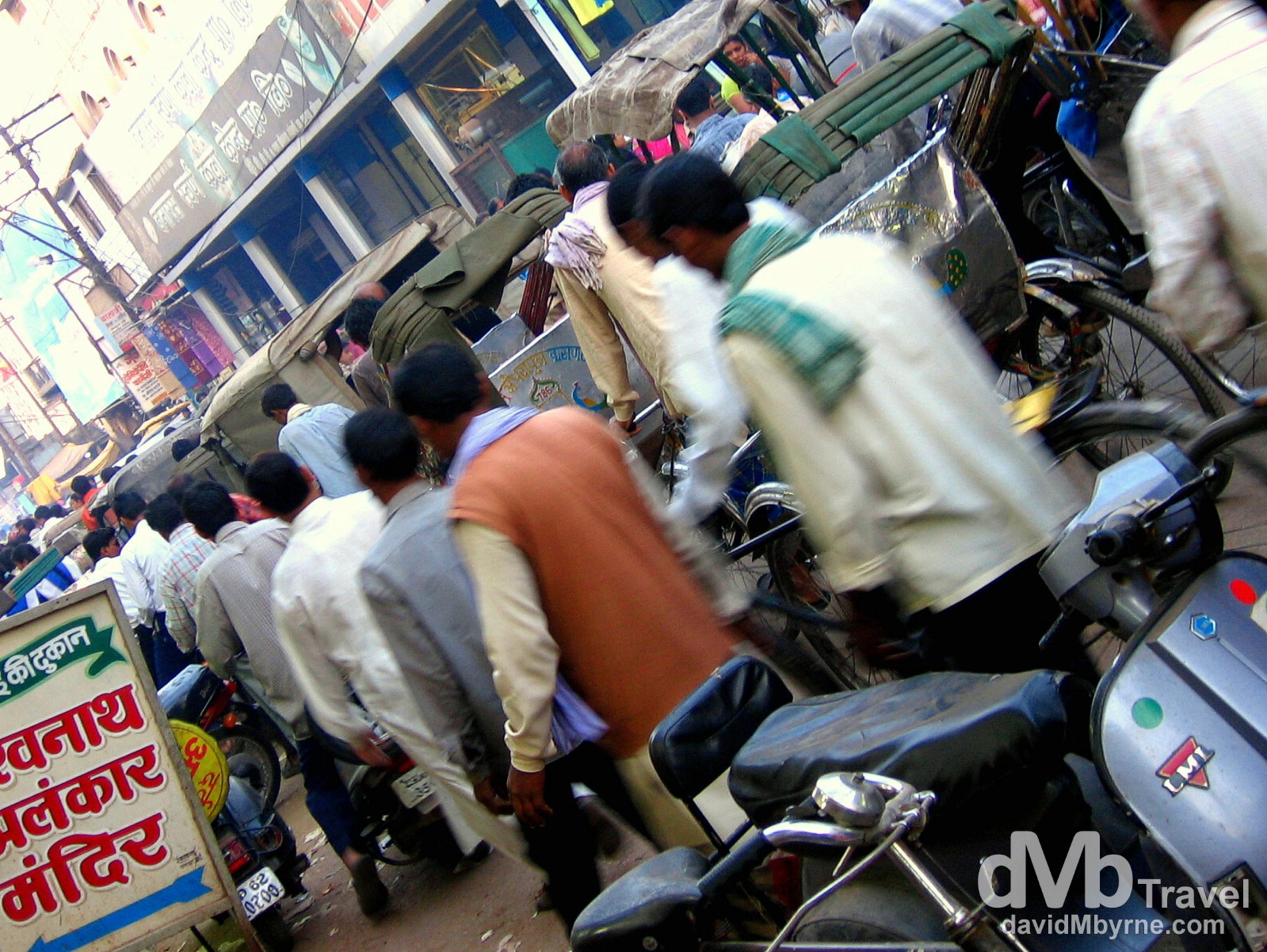 · Resistance is futile
We each bought ‘travellers’ style shirts a few days ago. You know, them linen style, loose fitting, hippy type shirts? It was out of necessity really, Pat having left behind some of our clothing in Kathmandu. Fear not, we won’t be braiding our hair anytime soon, nor will we be buying trousers to complement the shirts. 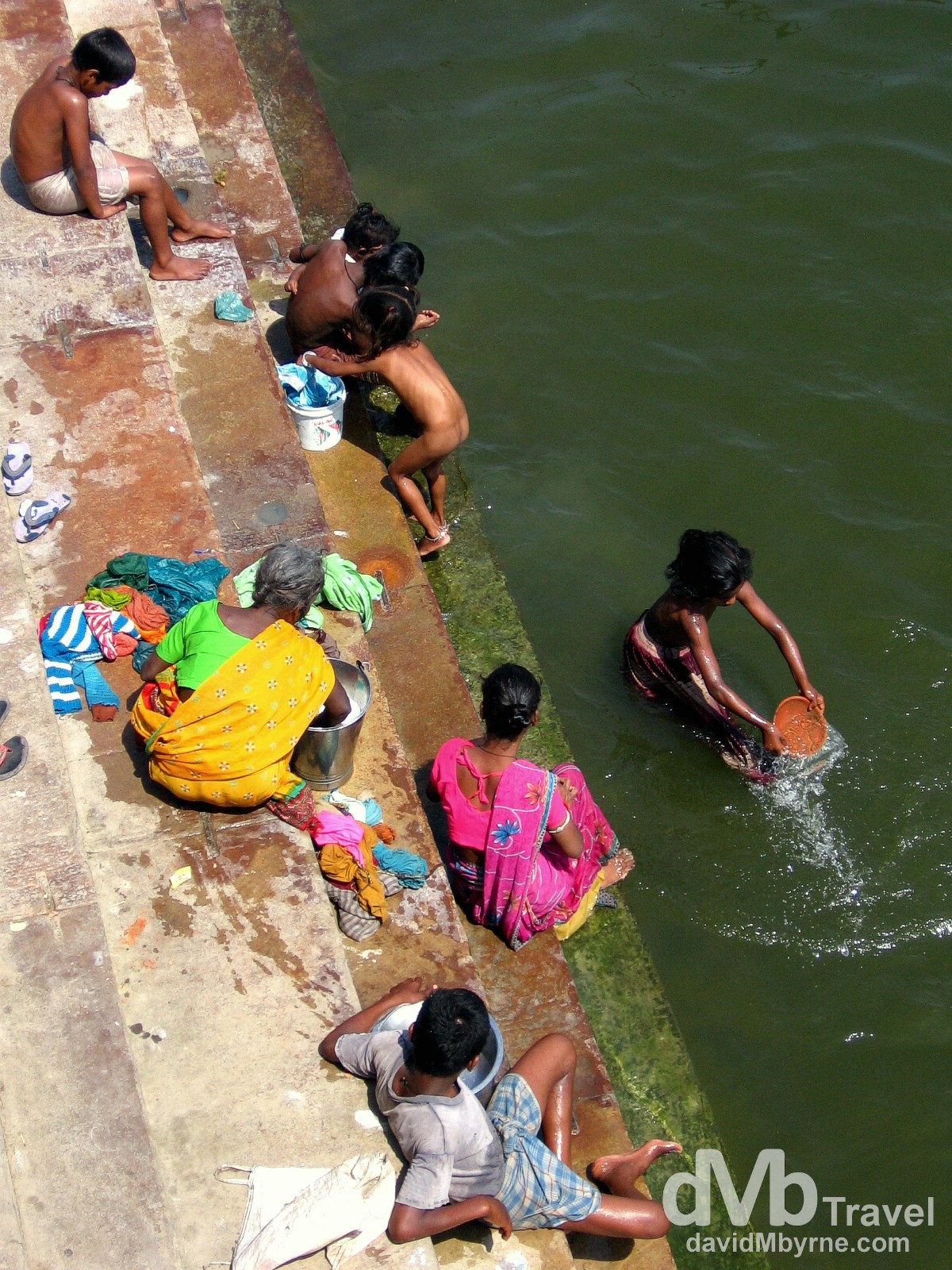 · All hope is gone
Pat reckons the human race is screwed. He said living in Ireland makes one feel good about mans chances (chances for what I’ve no idea). But that was before he saw China and India, which, admittedly, has been only Varanasi so far, and now he’s not so hopeful.

“Look at these people and how they live,” he says.

· A OK
No food poisoning yet. But it’s coming. 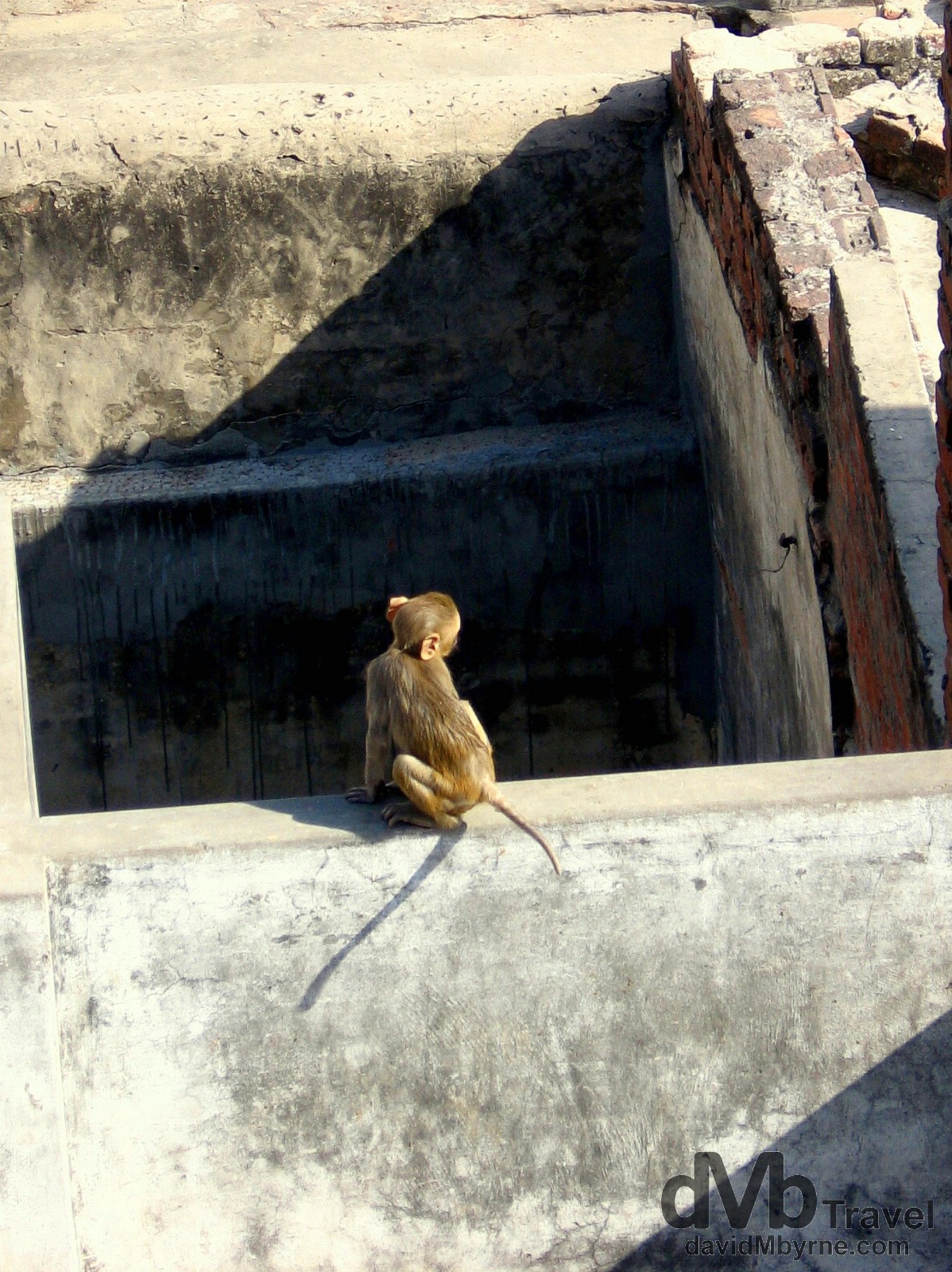 Urban jungle. A monkey on the rooftop of a dwelling in Varanasi, Uttar Pradesh, India. March 18, 2008.

· Manageable
Our bags are manageable once again. We mailed stuff home this morning. 8.5kgs of clothes and books. It feels good to be able to lift our bags again. We were told it’ll take 3 months for the package we sent to get to Ireland, if at all. It’d be nice if it did but not the end of the world if it didn’t.

UPDATE, JUNE 26TH 2008:
Oh we of little faith. The package arrived today, a mere 99 days after we said goodbye to it. The box was impeccably wrapped in a layer of plastic which itself was wrapped by a stitched pillow case. Hell of a job. I wish I could put into words my surprise at the fact that it arrived at all but, & as Yann Martel said in the novel Life of Pi, language founders in such seas. 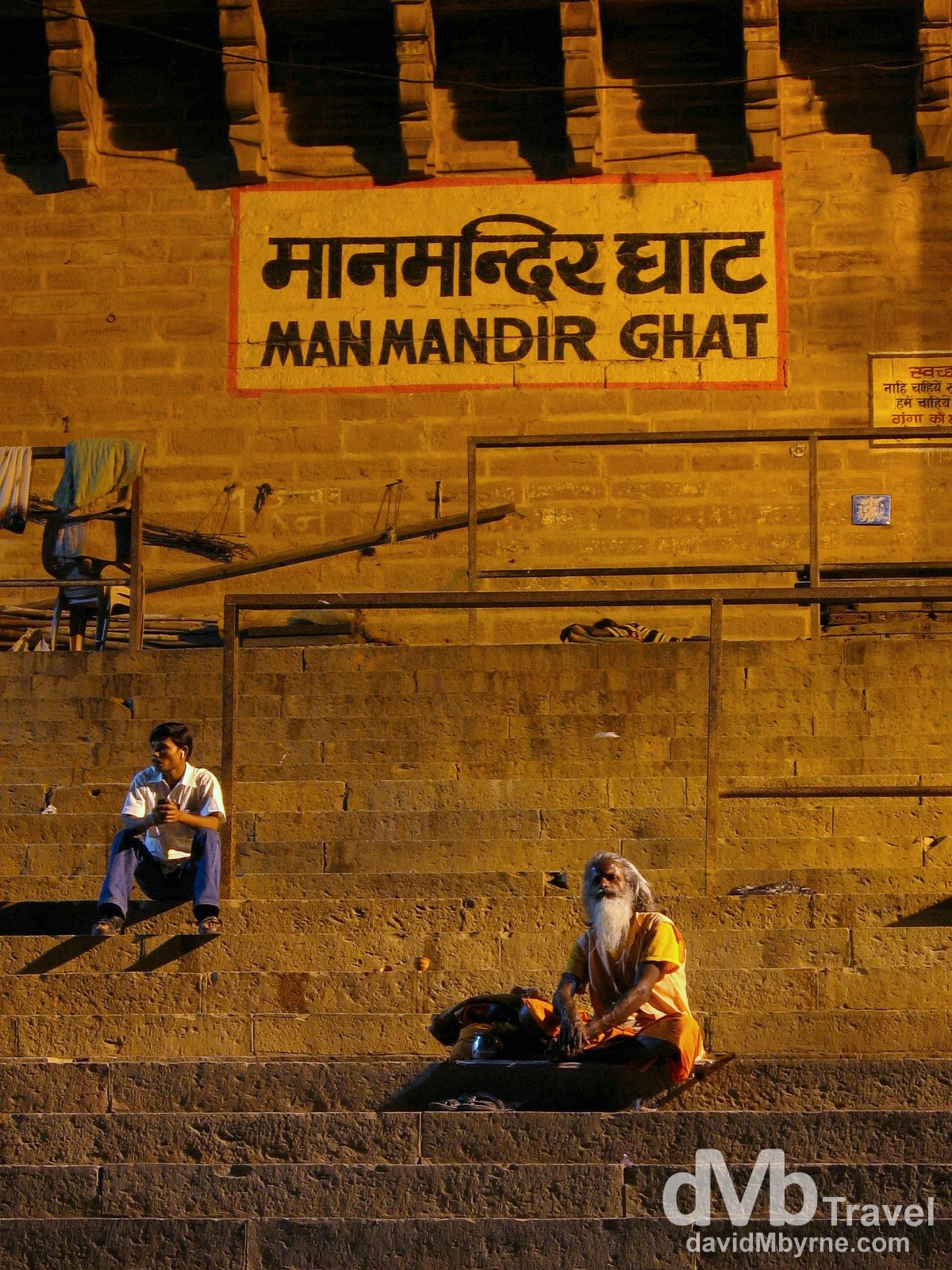 A Sadhu, a Hindu holy man on the path to enlightenment, and a local sitting at Manmandir Ghat, Varanasi, Uttar Pradesh, India. March 18, 2008.