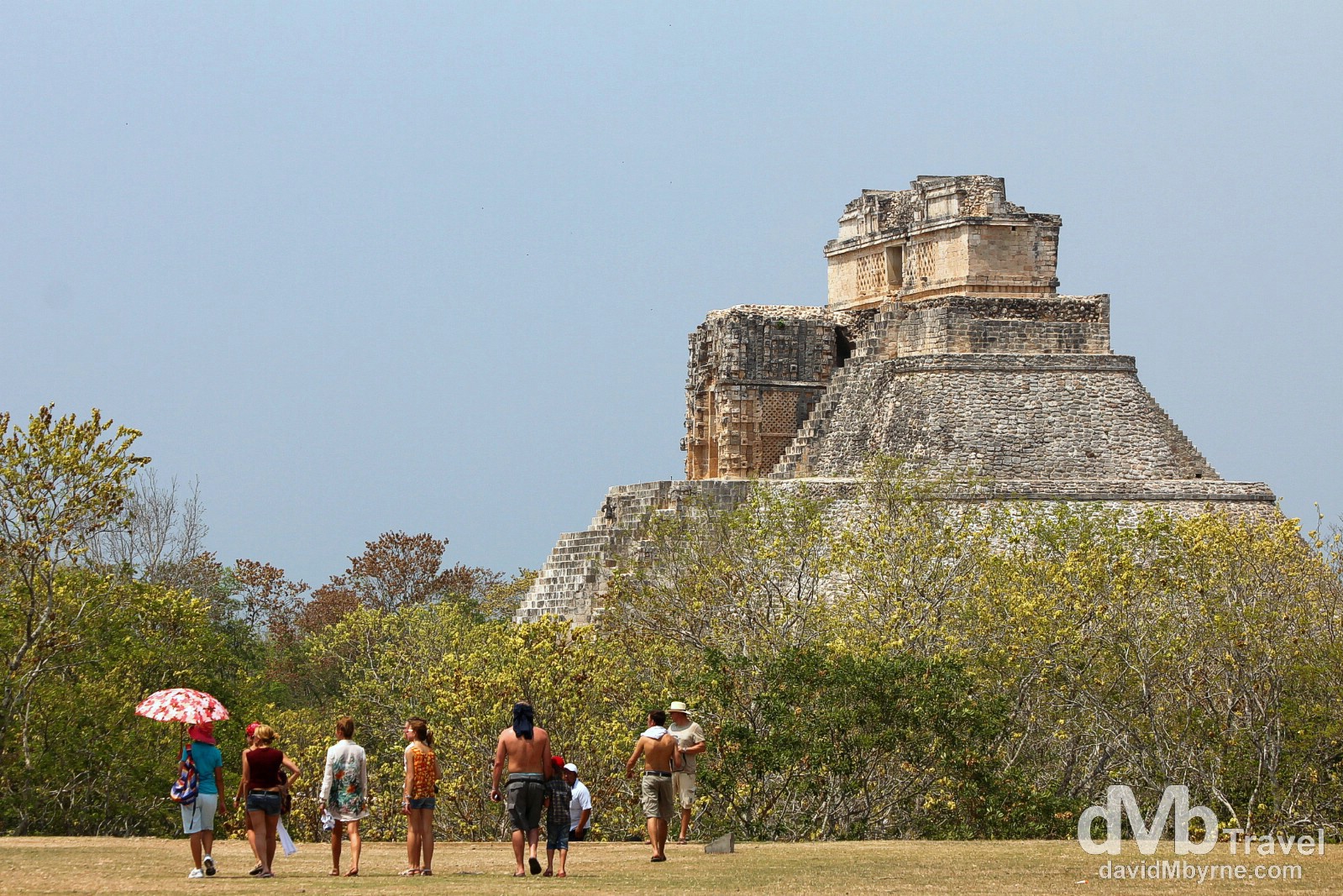 Mexico’s Yucatán Peninsula is Mayan land. It is today and it has been since pre-Hispanic times. The Mayan, members of an American Indian people native to regions of Mesoamerica (Mexico & Central America), had a culture which reached its peak between 300 AD and 900 AD, the so-called classical period, a period characterized by outstanding architecture, pottery and advances in astronomy.

The Mayans worked & lived off the land, studied the stars, developed writing & counting systems, & built cities with ingenious irrigation systems which enabled them to survive in the arid & desolate landscape of this part of the world. Their mysterious & rapid decline around 900 AD brought about the abandonment of their cities, the majority of which were lost to the surrounding jungle.

Today Mayan ruins in varying states of preservation are dotted all over the Yucatán Peninsula & further south in northern regions of Central America, specifically Belize & Guatemala (but also parts of Honduras). I’ll be passing through the region in the coming weeks & it remains to be seen how many Mayan sites I’ll get to visit. But if today’s visit to my first Mayan site, Uxmal, is any indication then I’ll be trying to hit up as may of them as I can. 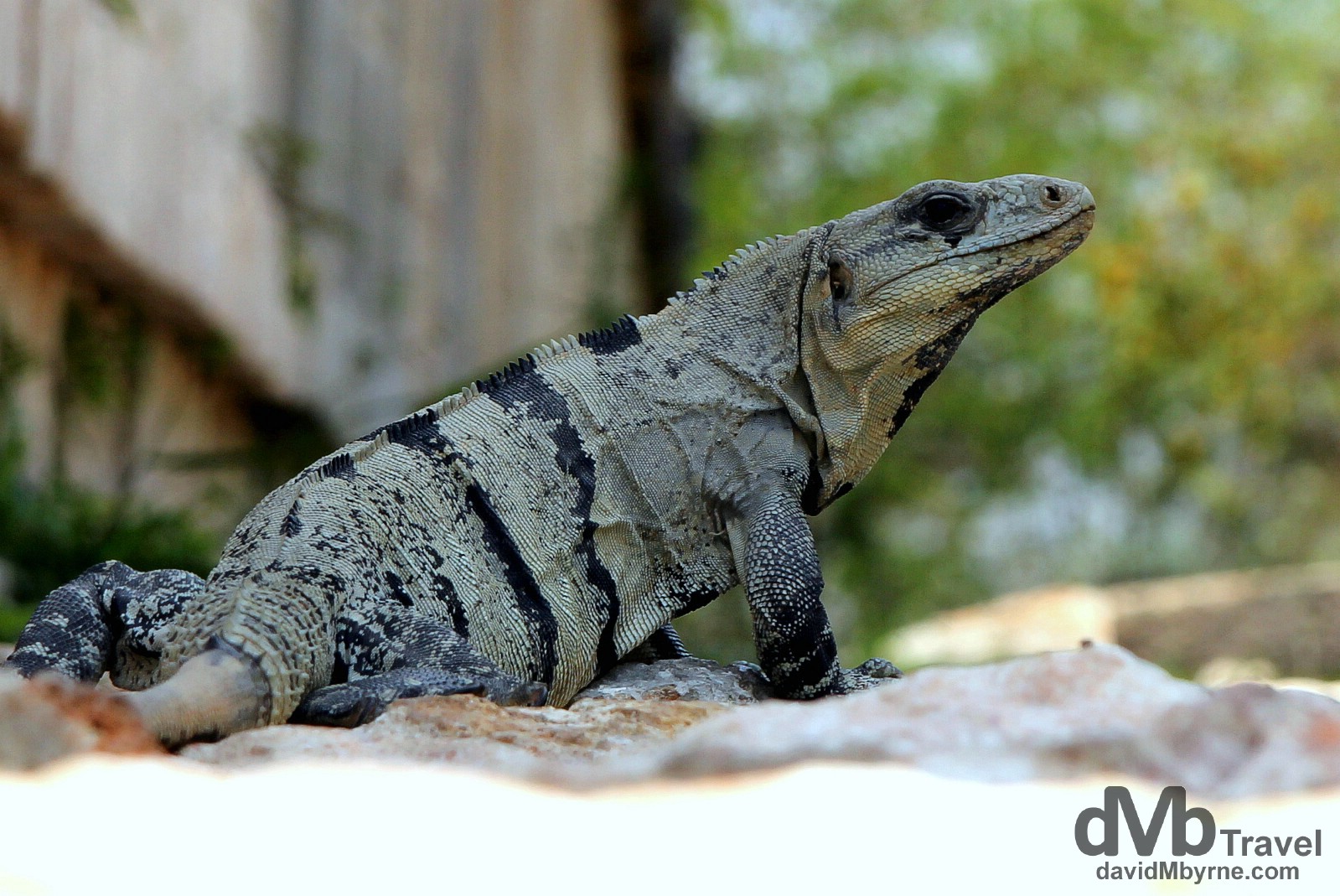 A lizard resting in the shade at the Uxmal Mayan Ruins (

The UNESCO-listed Pre-Hispanic Town of Uxmal

Uxmal (pronounced ‘oosh-mahl‘), about an 80 kilometre, 1-hour+ bus ride from Merida, the capital of Mexico’s Yucatán Peninsula, was settled in about 600 AD. It thrived thereafter & grew to have a population estimated to be about 25,000. However, and like all Mayan sites, it was mysteriously abandoned in about 900 AD. I found the ruins fascinating, their construction & history absorbing. This coupled with the scarcity of other visitors, the well-preserved, pink-hued limestone structures (because of the sites remoteness), & the site’s hilly setting, compactness & accessibility all conspired to ensure that my visit to Uxmal today was one hell of a memorable experience. 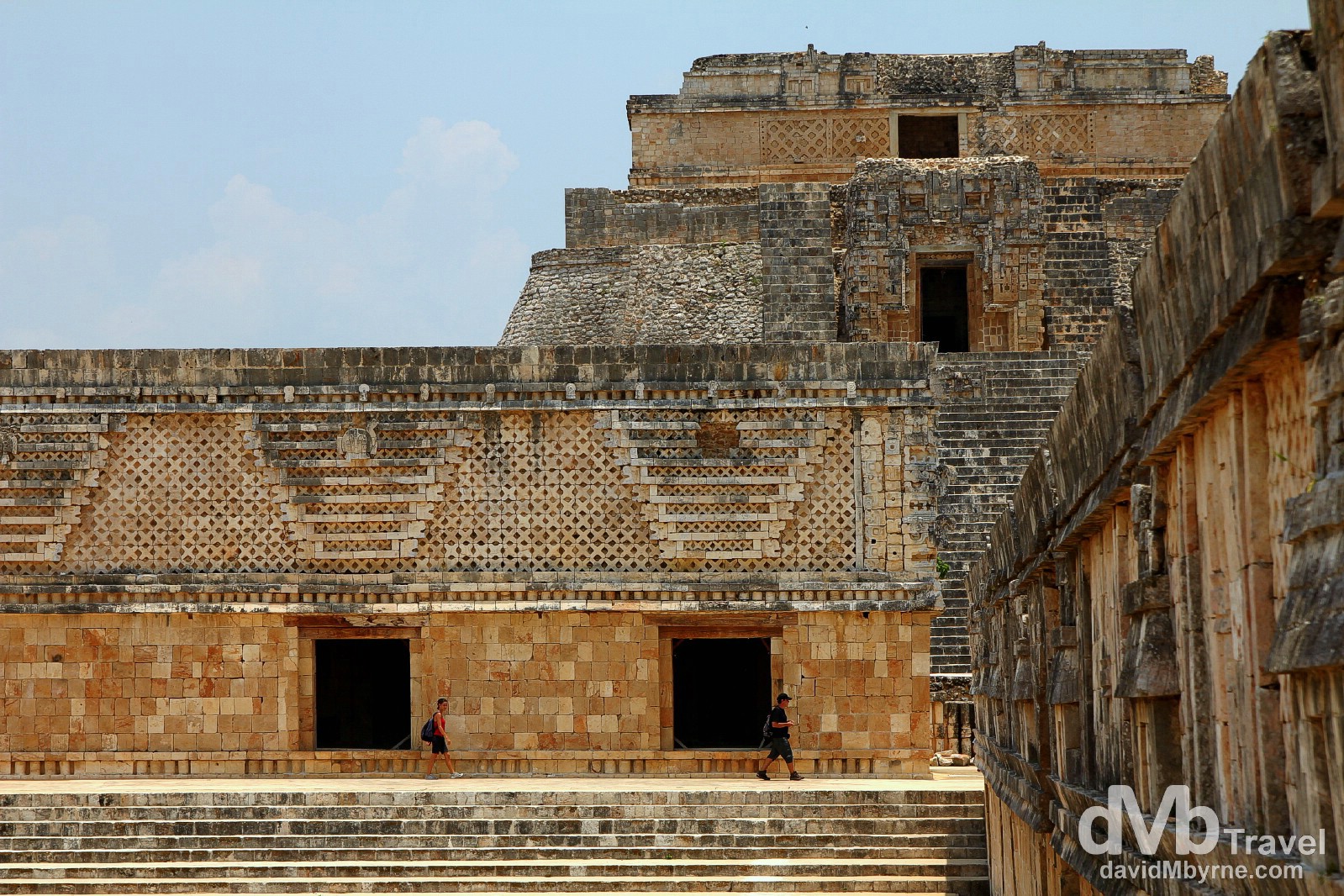 Uxmal is one of the best preserved ruins in the Yucatan & its architecture – characterized by low horizontal palaces set around courtyards decorated with rich sculptural elements and details – is some of the most dramatic. This is a picture in the courtyard of the Nunnery Quadrangle (a nickname given to it by the Spanish; it was a government palace), the finest of Uxmal’s several fine quadrangles of long buildings. It has elaborately carved façades on both the inside and outside faces. Uxmal Mayan Ruins, Yucatán Peninsula, Mexico. May 2nd 2013. 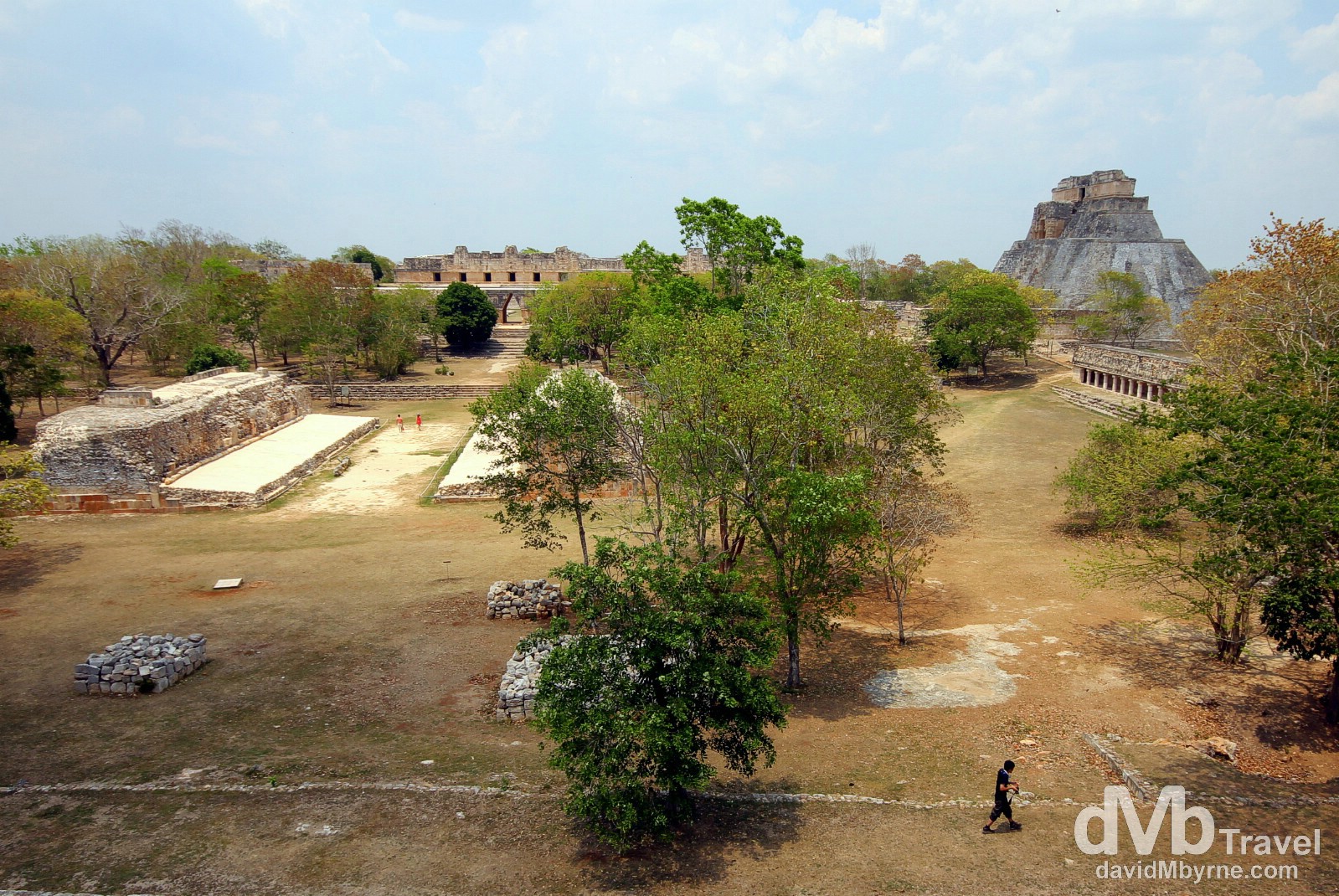 An overview of the Uxmal Mayan ruins. The large 110 ft x 32 ft Mesoamerican ballcourt, an ever-present at most Mayan sites, can be seen to the left with two figures walking through it – an inscription on its walls say it was dedicated in 901 AD). Uxmal’s central & tallest structure, El Adivino, a.k.a. The House of the Magician, can be seen in the distance to the right. Uxmal Mayan Ruins, Yucatán Peninsula, Mexico. May 2nd 2013.

Walking towards El Adivino, the House of the Magician, at the Uxmal Mayan Ruins. The 5-level stepped pyramid is probably the most distinctive Mayan structure on the Yucatán Peninsula. It’s considered unique in the Mayan world because of its rounded sides, considerable height (115 ft), steep slope, and unusual elliptical base. Tourists were once able to climb the structure but as of October 2009 this is no longer allowed. Uxmal Mayan Ruins, Yucatán Peninsula, Mexico. May 2nd 2013. 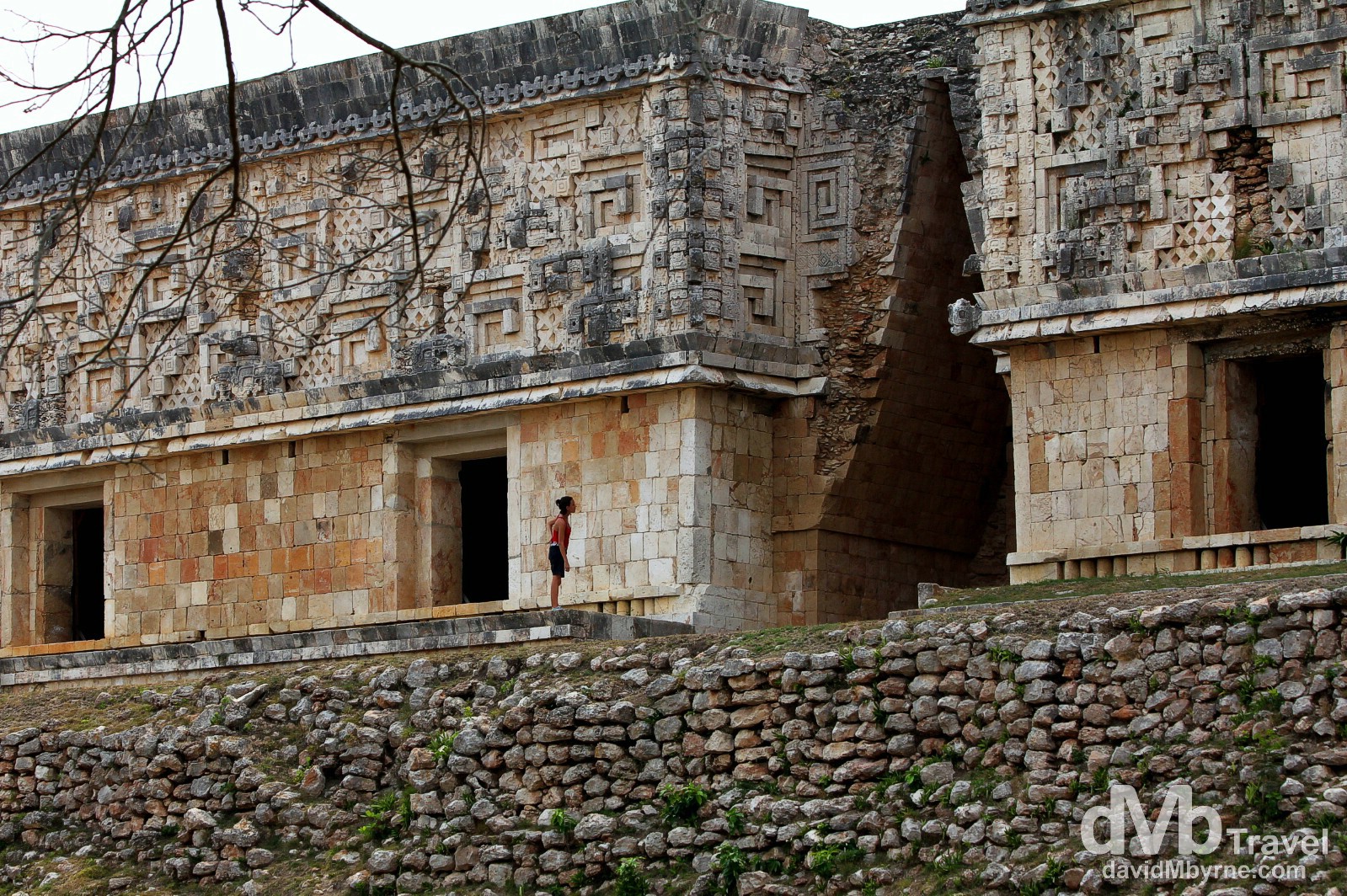 Uxmal’s Governor’s Palace is an excellent example of stone mosaic work, one probably worked on by hundreds of masons and sculptors. It’s huge – it occupies five acres – and contains many beautiful sculptures of the rain god Chaac, serpents and astrological symbols. Uxmal Mayan ruins, Yucatán Peninsula, Mexico. May 2nd 2013.