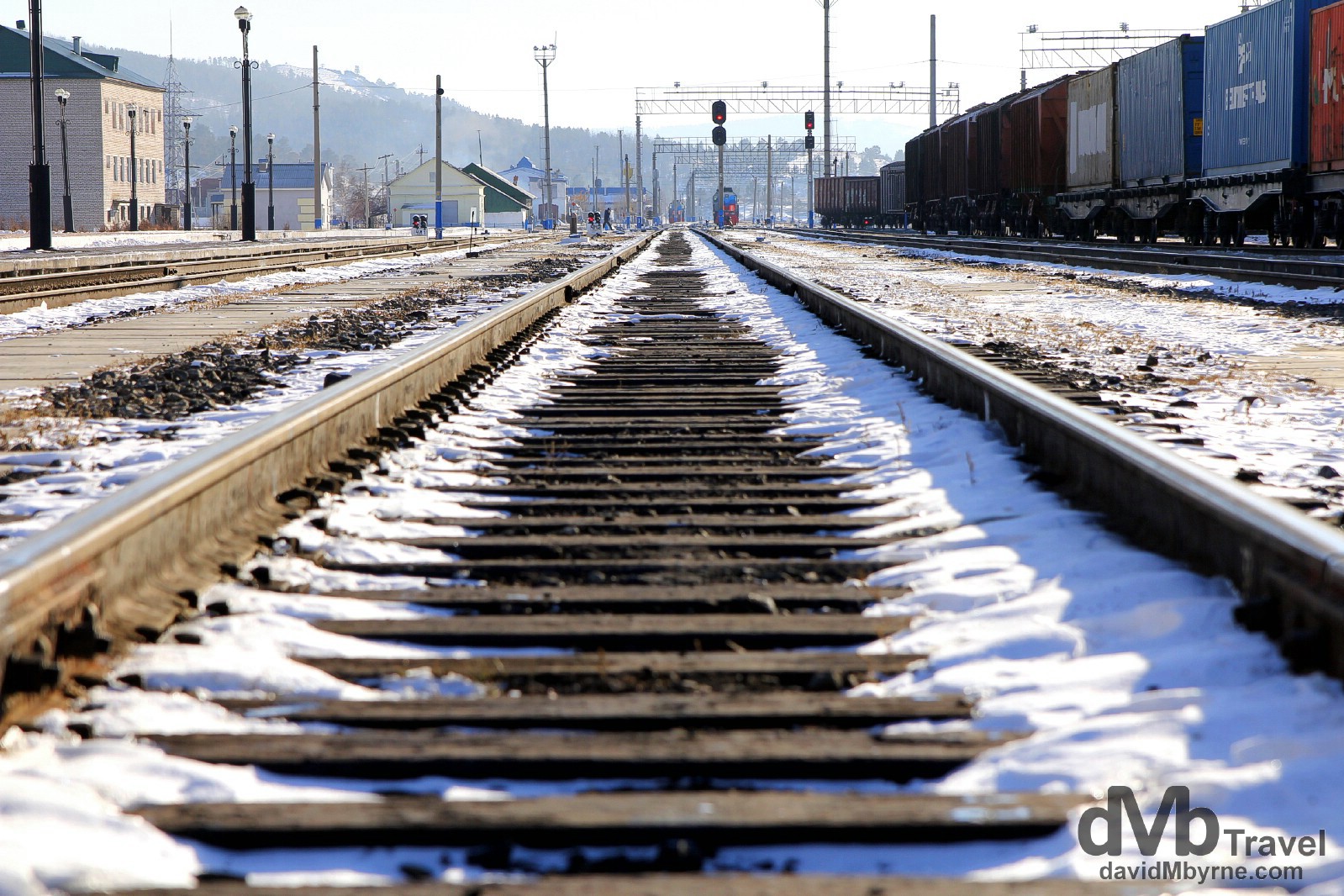 I‘ve only now just figured out the timetable for this train, the one posted at the end of my carriage. As a result I now know I’ll be arriving in Irkutsk, my first stop in Russia, early tomorrow morning having spent not one but two nights on this train getting there from Ulan Bator, Mongolia. That means in total the trip will take the guts of 38 hours, an inordinate amount of time to cover the 1,100 kilometres of 5 ft gauge, non-standard, Soviet-era railway track connecting the two destinations. There’s a general air of unhurriedness with cross-border train travel in this part of the world & this train, the daily 263 from Ulan Bator to Irkutsk, certainly can’t be accused of being in a hurry. Drawn-out border formalities (passport & customs checks) – first by the Mongolians & then by the Russians – & random stops in the middle of nowhere & at every town/outpost unlucky enough to find itself located in this barren, cold, desolate part of the world means the trip could be done a lot quicker. 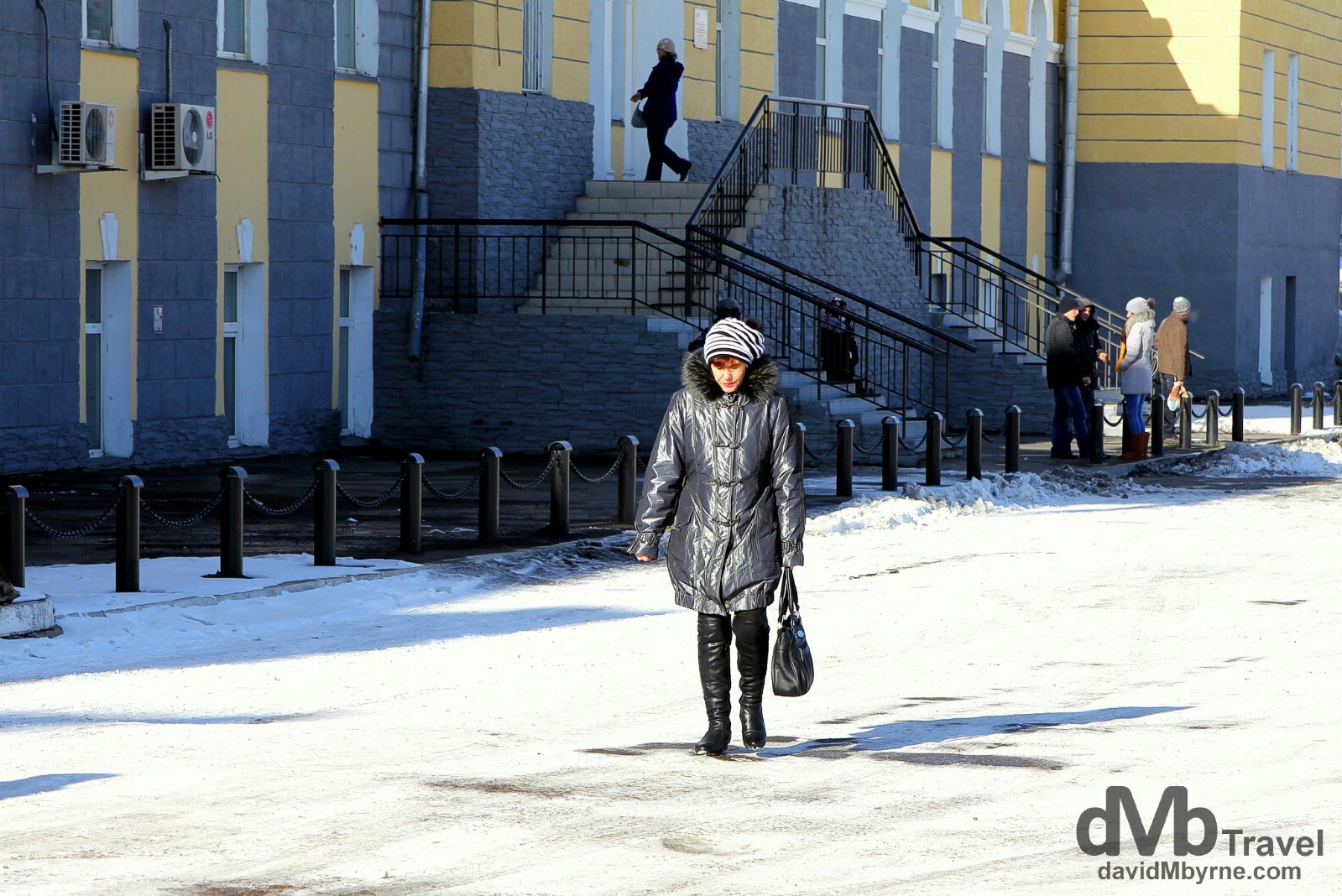 Outside Naushki train station, the first stop in Russia on the east to west bound Trans-Mongolian route of the Trans-Siberian Railway. Having left Ulan Bator, Mongolia, at 9:00 p.m. yesterday, November 4 2012, & having passed out of Mongolia early today, I rolled into Naushki, the Russian border town just over the border with Mongolia. The train sat here for over 4 hours giving me ample time to take a look around, walk on snow for the first time (although further south, Mongolia was colder but it’s just a little too early yet for snow), & withdraw my first Russian roubles – I needed to break a 1000 rouble note (€25) to get change for the 9 rouble (€0.20) train station toilet so I bought my first Russian beer here, too. Naushki, Siberian Russia. November 5th 2012.

It is almost axiomatic that the worst trains take you through magical places.

The Cyrillic Conundrum
For all its apparent unhurriedness, Train 263 is at least keeping to that aforementioned timetable. It wasn’t easy deciphering it. Firstly, and not surprisingly, it’s in Cyrillic, the alphabet used for writing the Slavic languages of which Russian is one. I’m no polyglot but resorting to crudely matching Cyrillic characters (half a T followed by a circle with a line through it followed by a back to front capital N etc.) on the timetable against those listed in my awesome Trans-Siberian Handbook – acquired from 2 Aussie guys I met in Terelj National Park in Mongolia few days ago – had the listed locations down easily enough. Secondly, scheduled arrival & departure times displayed are, as on all Russian train timetables, in Moscow time even though Moscow is 4 time zones away (or is it 5?). I guess for a rail system that spans a country of 8 time zones a standardised reference time makes sense but it sure does make nailing down here & now times a bit of a challenge, especially adding to the mix the time change when crossing over the border from Mongolia to Russia. 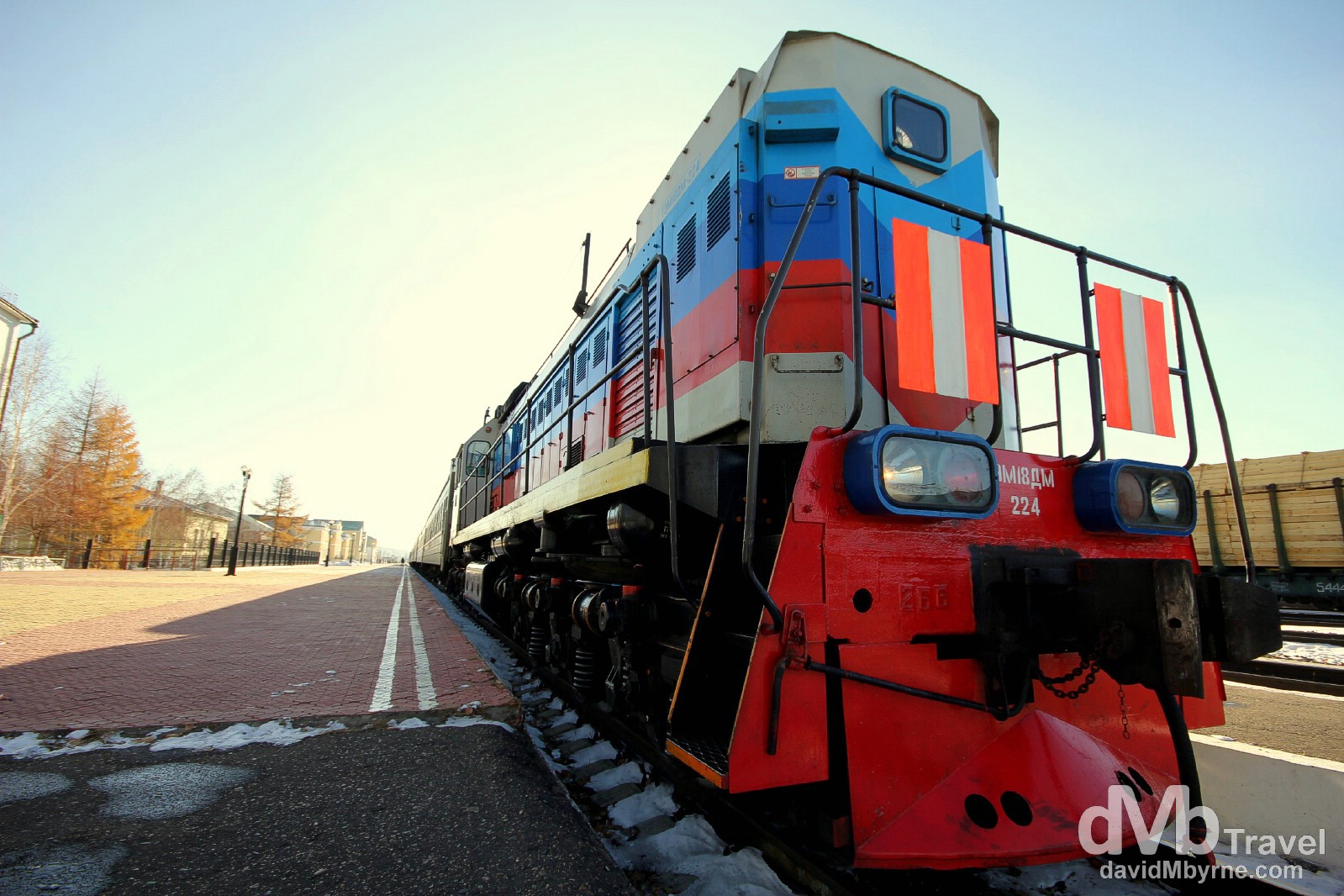 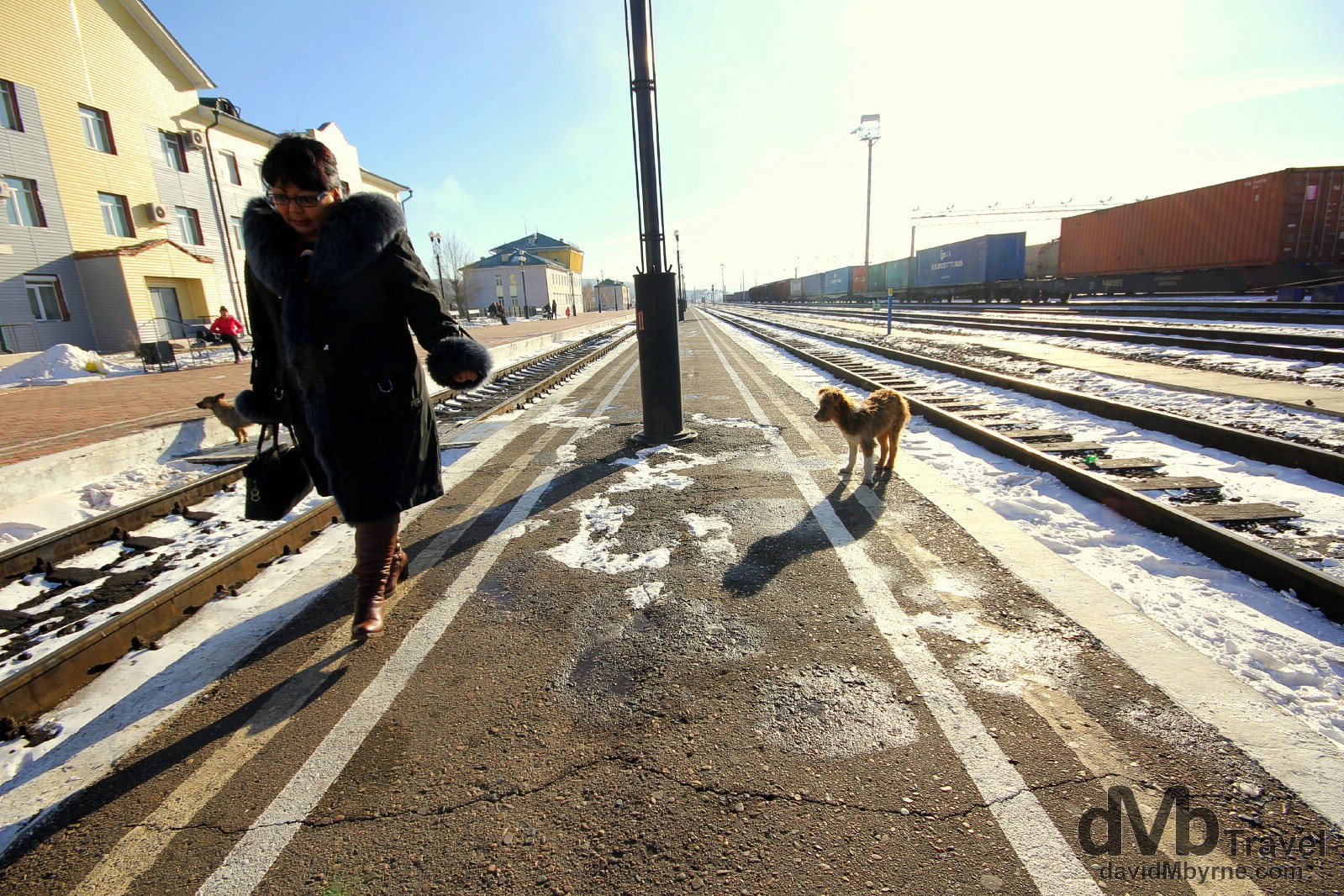 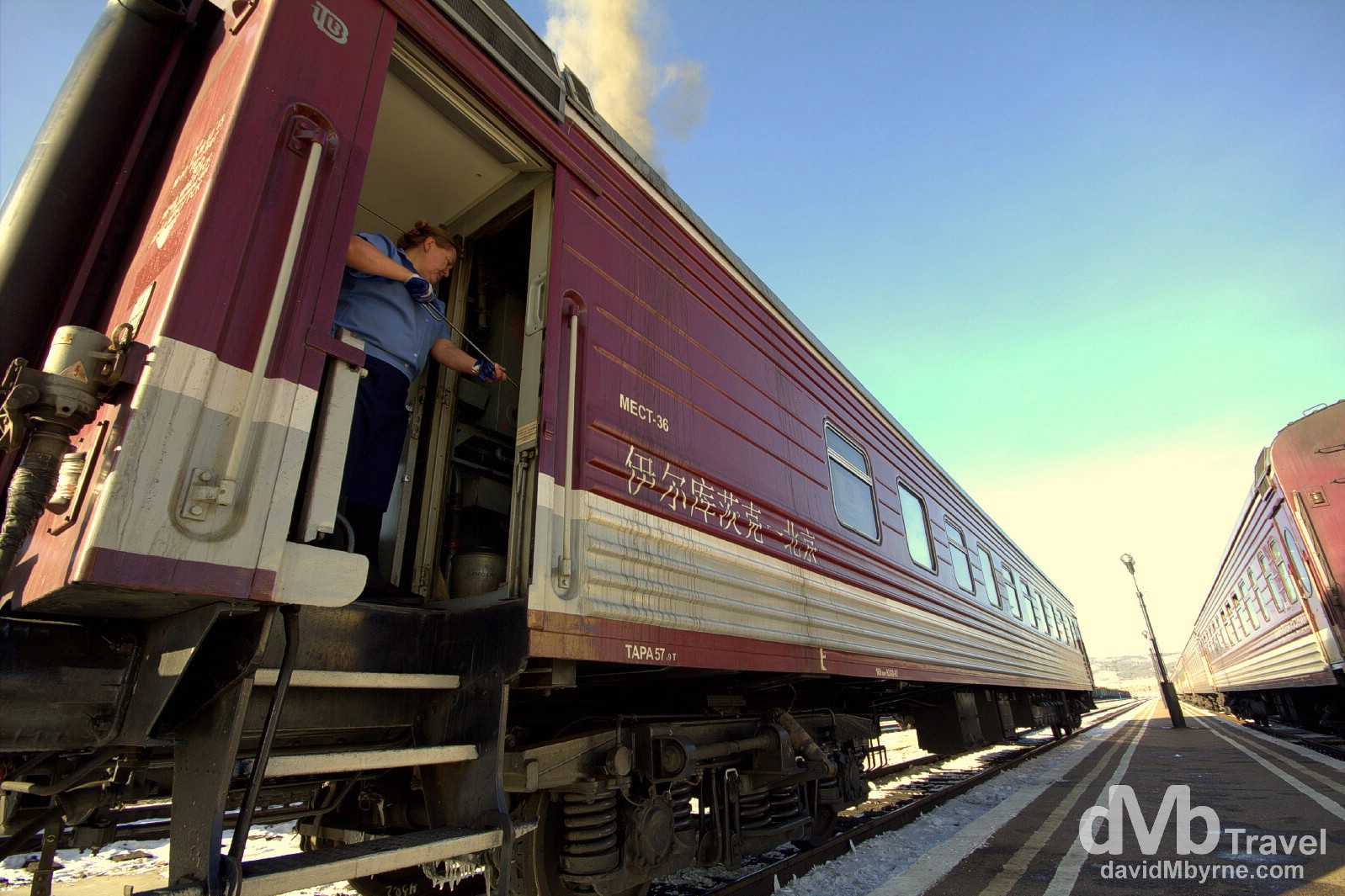 A provodnitsa (carriage attendant) stoking the hot water boiler of a train carriage as it sits Naushki train station. For the majority of the time we sat in Naushki station, my carriage wasn’t tethered to any other carriage or locomotive. Eventually it got some company & we moved on en route to Irkutsk, my first stop proper in Russia. Naushki, Siberian Russia. November 5th 2012 November 5th 2012. 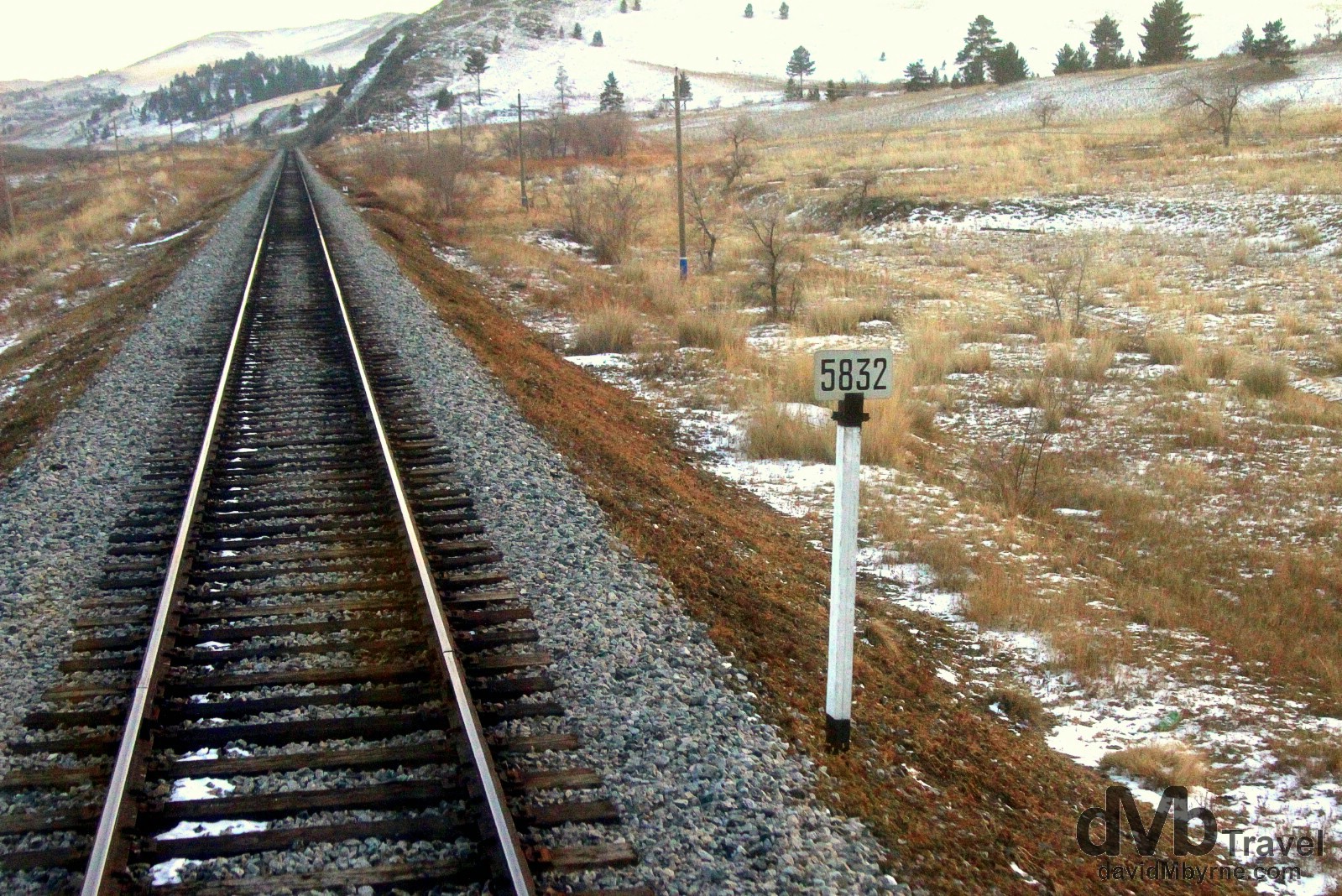 5,832 kilometres to Moscow having just left Naushki train station. On the Trans-Siberian Railway, track-side markers indicate how far the train is from Moscow. Some 60 kilometres out of Naushki, the first stop in Russia on the east to west bound Trans-Mongolian section of the Trans-Siberian Railway, & there’s only 5,832 kilometres to go, a distance one could cover non-stop in 5 days from here but which I aim to cover, allowing for stops en route, in about 2 weeks. On the train from Naushki to Irkutsk, Siberian Russian. November 5th 2012

Trans-Mongolian Small Talk
So all in all I’m pretty certain, and barring any delays, that I’ll be arriving into Irkutsk at 6:55 a.m. tomorrow morning, November 6, 2012. Until then I’ll continue to look out the window at the icy, snowy landscape, make (very) small talk with the two Mongolian ladies sharing my 4-berth 2nd class/Kupe compartment, eat, read (on this trip alone I’ve brushed up on my Russian history), drink (tea, Goa-awful 3-in-1 Chinese coffee mix, recently purchased Russia beer) & make regular trips to the carriage timetable to see when the next stop is & for how long. It’s easy once you get the hang of it. 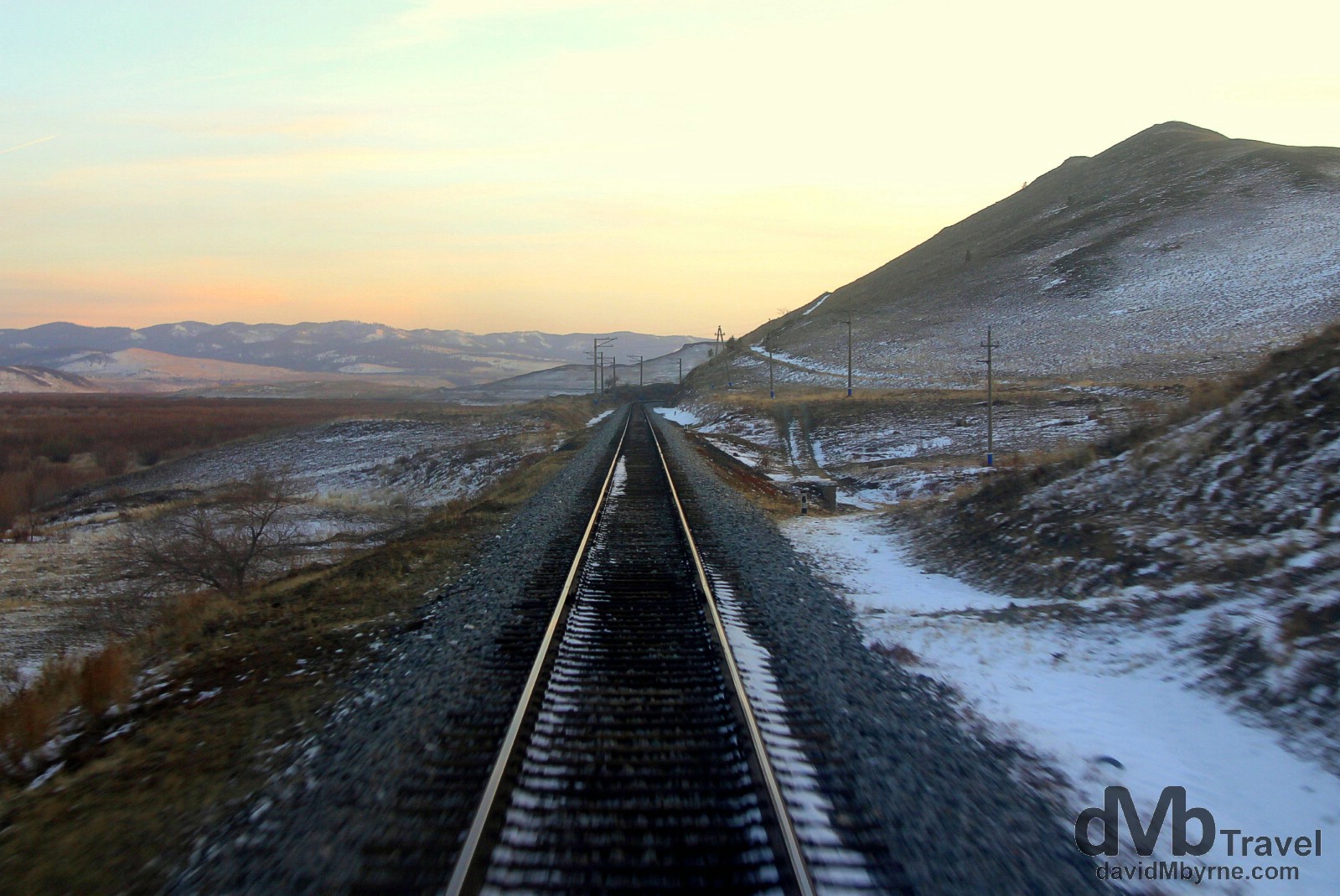