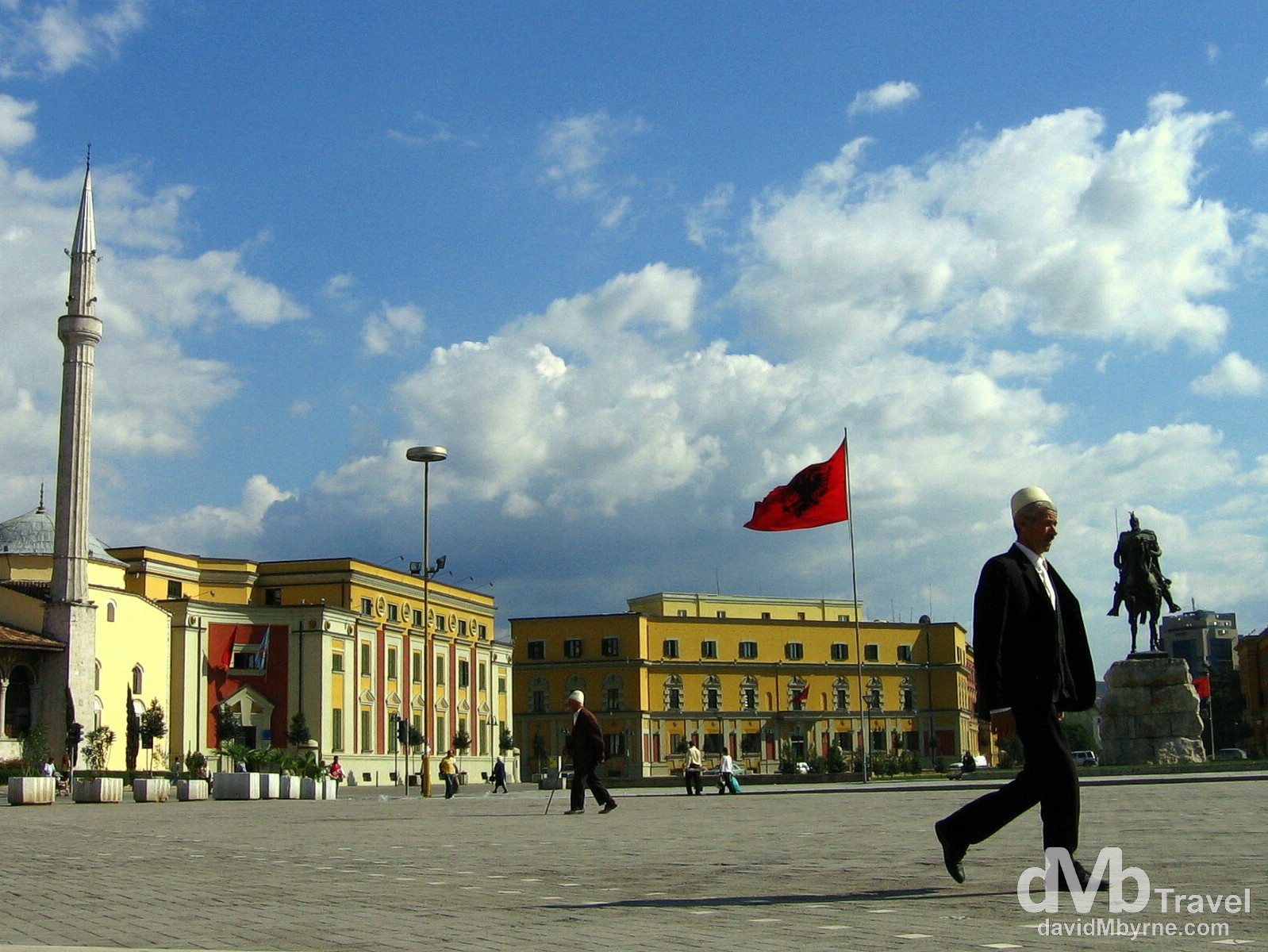 Tirana is the capital city & the centre of political, economic, and cultural life in Albania, the budding bastion of new democracy that is this little corner of Southeastern Europe. Having spent the majority of the last 60 years under a strict and isolationist Dictator, the country is now adopting a free market economic model with mixed results. Present-day Tirana is where the old and new Albania meet & where contrasts are striking – unpaved streets host brand new Land Rovers, iPhone-toting youngsters rub shoulders with street vendors peddling all manner of items, and gleaming glass towers look down on abandoned construction projects. There’s really not a whole lot to do or see here save for sitting around all day relaxing and sipping cappuccinos – the young population, laid-back vibe and abundance of cool street side cafes means this is a great place to come to pass a few days doing nothing except watching the world go by.

Central Tirana is marked by Sheshi Skenderbeg Square, a typically sterile place with the prerequisite equestrian statue of some national hero in its centre. What makes this oh-so communist looking place sort of unique in the world of ex-communist squares is the mosque found in one of its corners, the minaret of which is visible in this picture. Completed in 1821 after a 28 year build, it is one of the oldest buildings in the city. Sheshi Skenderbeg Square, Tirana (

A few more Albanian observations to add to those I made in Durres.

· Mother Teresa
She’s everywhere, her face adorning everything from small posters on lampposts to the whole sides of the buildings fronting Sheshi Skenderbeg Square. Although born in Macedonia, my next stop, Mother Teresa was an Albanian whose actual name was Gonxhe Bojaxhi. She was born to Albanian parents who came from Shkodra, a city in northern Albania. She spoke perfect Albanian and visited the country more than once during her lifetime.

· Rags & Riches Side By Side
The contrasts between the haves & have nots here in cafe culture Tirana are pretty striking. Granted it’s no India but you’ll still see a child vendor selling cigarettes outside the gates of a Porsche dealership; a BBQ corn vendor plying his trade on the steps of an all-English speaking, credit card-accepting & international wine list-boasting restaurant; and a swanky Hilton Hotel beside an unfinished building project, one that clearly ran out of money early into the construction phase – and these unfinished buildings, a huge blight on the Albanian landscape, are legion.

· Cuts
Another aspect of Albania that’ll be sure to remind you of the developing and cash-strapped nature of the country’s infrastructure is the almost daily water and power outages. As a result you’ll see (& hear) rows of generators fronting virtually every business in the city. I had a bird’s eye view of a spike in the city’s power grid from the SKY CLUB panoramic restaurant in the city’s Sky Tower. The lights of the city died right before my eyes before slowly coming back online, building by building, street by street. It was a neat sight.