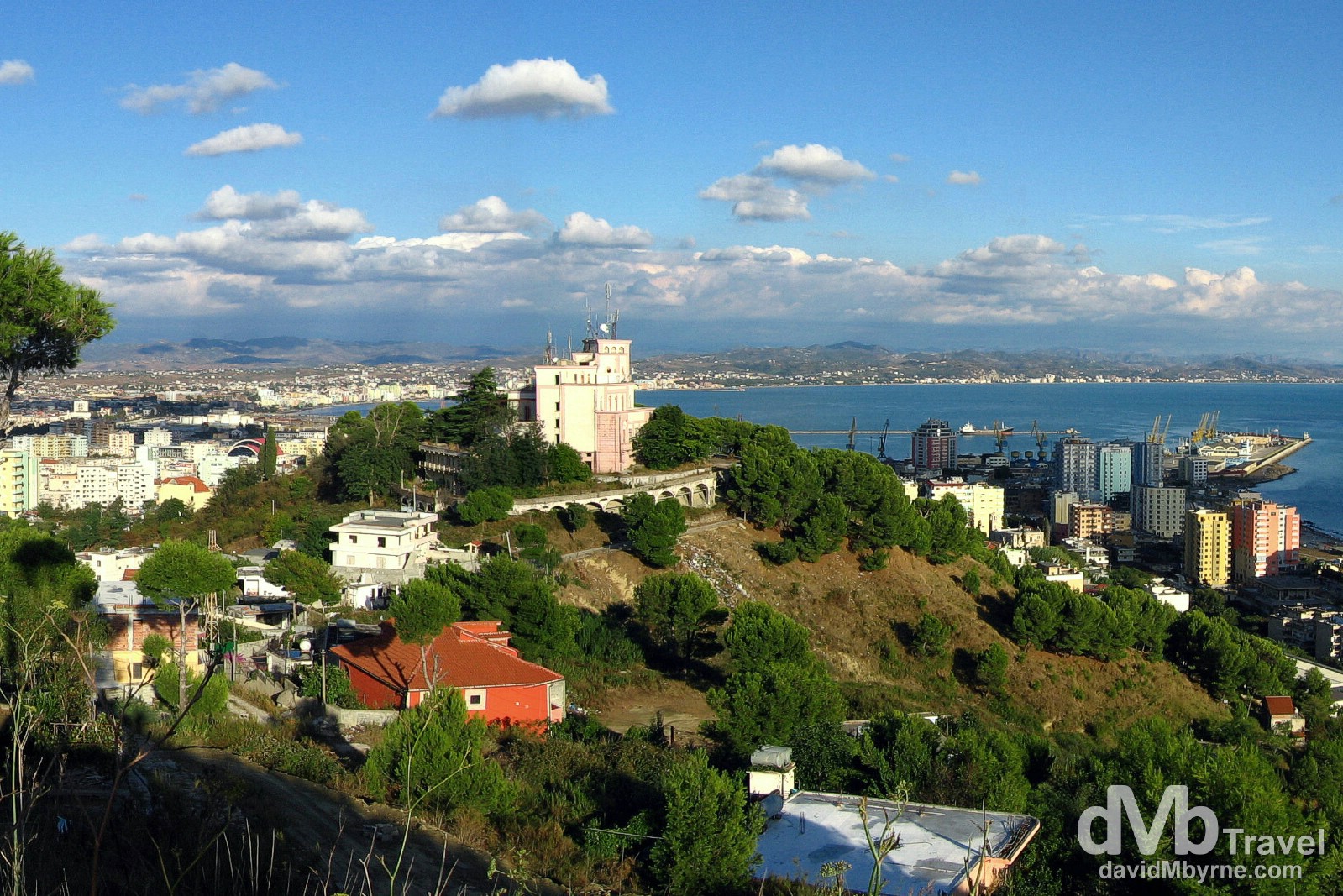 I was befriended by a local here in Durres, Albania, shortly after disembarking the overnight ferry across from Bari in Italy. It was an abnormally wet & overcast September day yesterday upon arrival but David, my new Albanian best friend, brightened up the mood by being a truly wonderful ambassador for his country – he navigated me through the streets of Durres, Albania’s second city, to my room at the Hotel Mediterranean down by the Durres waterfront. It was a nice introduction to the country.

The port of Durres, Albania’s second city, & the port I sailed into yesterday as seen from a viewpoint overlooking the city later that afternoon (when the weather had improved). Being up here gets you up close and personal with the large white & pink building in the centre of the image. The former residence of the King of Albania, today it sits abandoned and neglected (horribly so from up close), its roof resembling some kind of communication paraphernalia wonderland. Durres (

It’s my first trip to Albania, my first time in this little ex-Communist corner of Southeastern Europe, and while it may only be a 7 hour slow-ferry ride across the Adriatic Sea from the Italian east coast, it feels, and looks, wholly different. This area of the continent is still developing, still developing everything from its infrastructure to its tourism industry. It’s also still recovering from 50 years of Communism and, unfortunately, some parts of it are still recovering from recent (early 90s) Civil Wars. 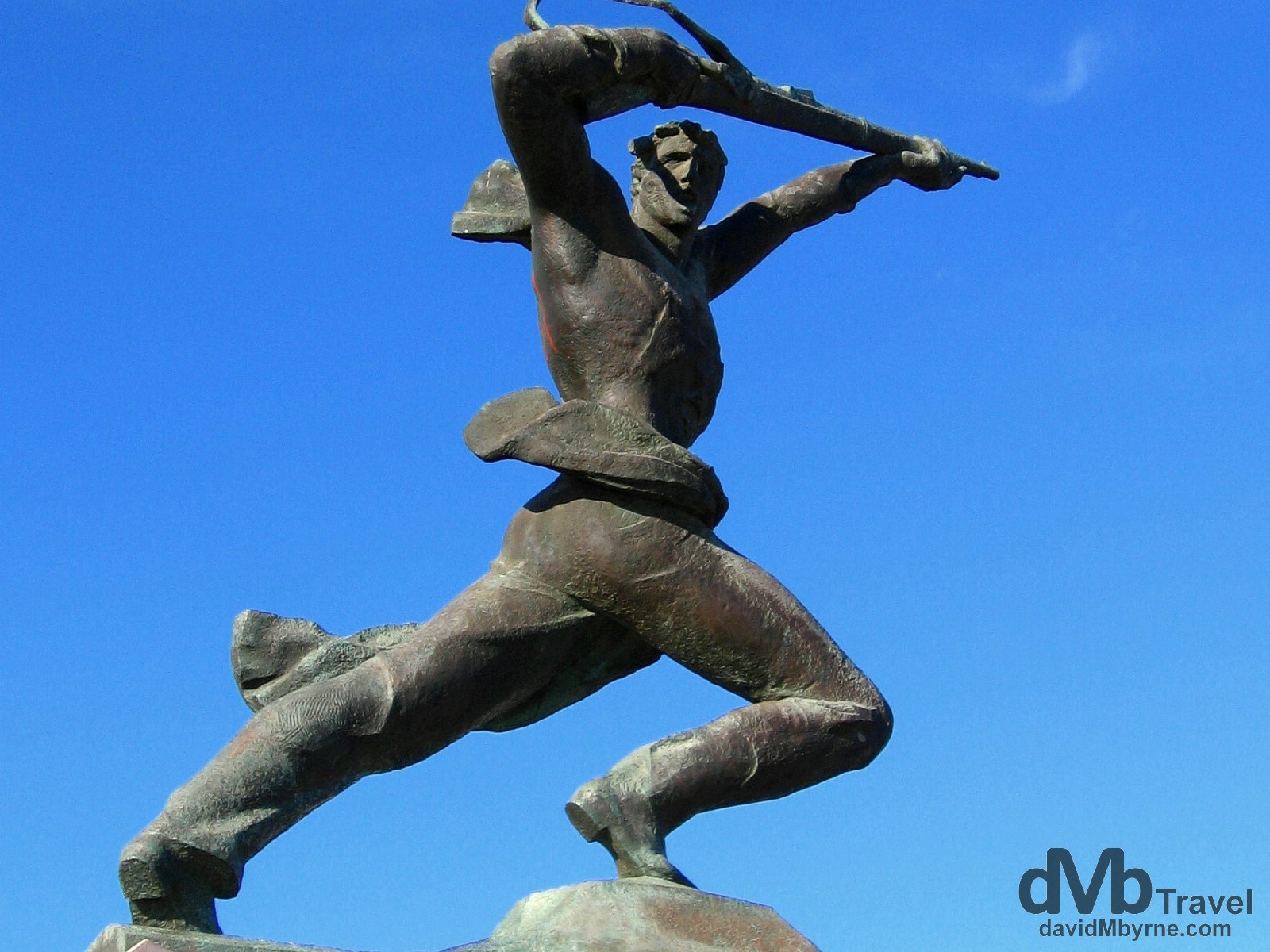 Communism. At least its legacy is visually consistent. Overbearingly sterile, but at least visibly consistent. Albania, even the bits of it I’ve seen thus far, share the communist traits I’ve seen in every ex-communist country I’ve visited to date: sterile downtowns with large squares decorated with a statue of some national hero on horseback and various military & for-the-people statues; poor infrastructure; boring, straight-edged pastel coloured buildings; unfinished construction projects; beat-up buses; roads full of old East German Mercedes; and an unnecessarily large presence of visibly underfunded law enforcement. This is just one of many huge communist era statues, an integral part of the communist message, given pride of place along the Durres waterfront. It remains to be seen but I doubt the rest of Albania, even some 17 years removed from communism, will have any less of a concentration of statues than Durres did. Durres, Albania. September 7th, 2007.

I had few preconceptions about Albania before getting here. I’ve seen firsthand developing nations (mainly in Southeast Asia, Mongolia and India), the affects of years of Communism (China, Vietnam and, of course, Russia) and even parts of ex-Communist Eastern Europe itself (The Baltic States (Estonia, Latvia & Lithuania) & Poland. Albania has mostly lived up to my preconceptions. It’s a strange sort of place, a country that has been classified as an emerging democracy since the 1990s, a classification it has received despite its troubled history of internal conflict and foreign rule, for the longest periods by the Romans and Turkish Ottomans, the latter responsible for the popularity of the Muslim religion in the country. But it wasn’t an easy path to get there. It was staunchly communist from 1946 until 1992, years in which it was the most backward corner of Europe having successfully managed to ossify itself from the rest of the world by dirtying its bid with its closest alleys – first Yugoslavia (in 1948), then the USSR (1961) and finally China (1978). With isolation assured, its oh-so paranoid leader, Enver Hoxha, then embarked on a nationwide bunker-building spree, building 700,000 reinforced defensive bunkers to protect from attack from so-called ‘hostile neighbours’ – these indestructible bunkers still litter the countryside today. 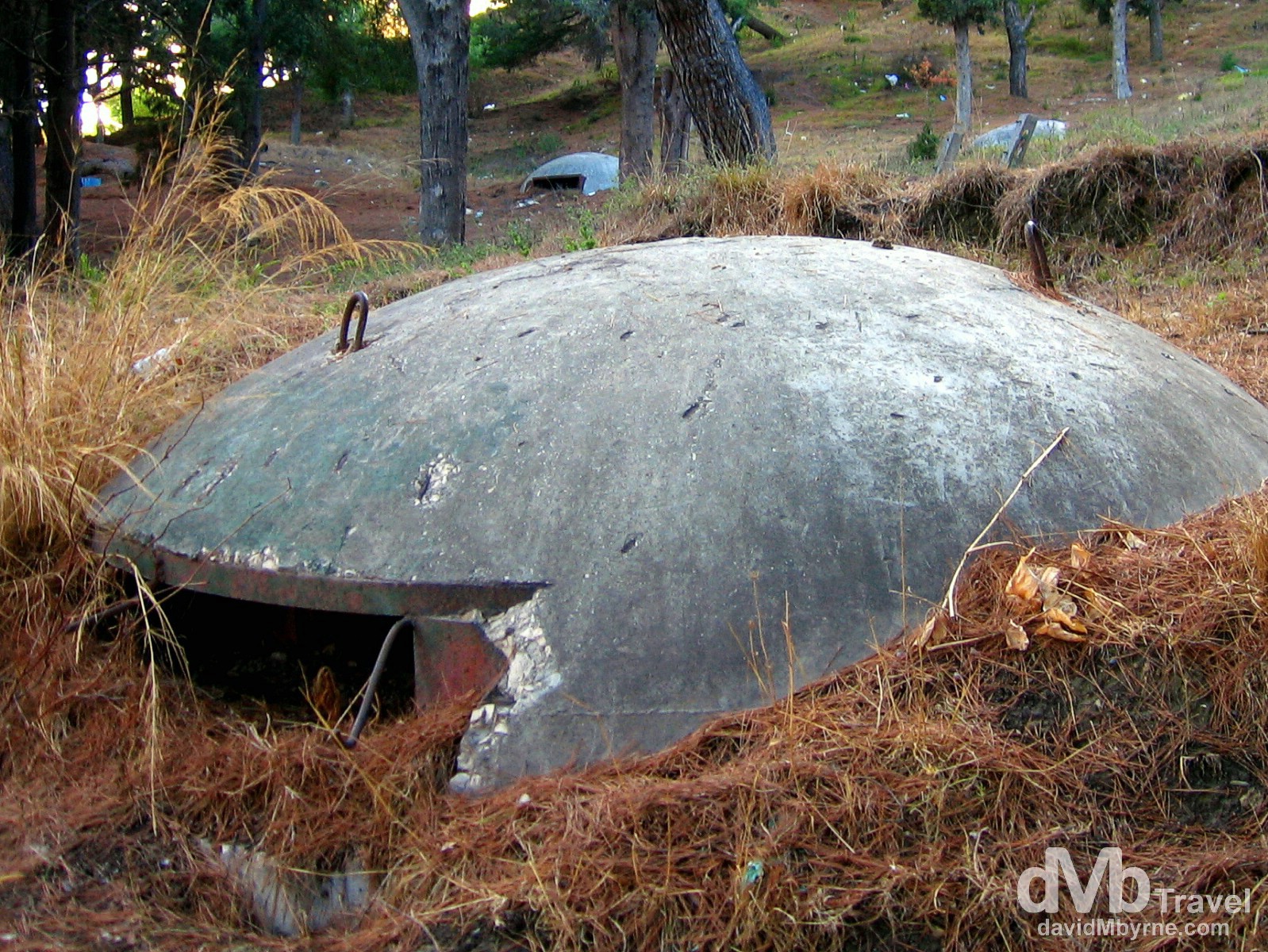 One of the estimated 700,000 bunkers that dot the present day Albanian landscape, built as a result of the paranoia of the country’s long-time communist leader, Enver Hoxha. Most of the bunkers were built during a 35 year period between 1950 and 1985, a time when Albania had no international friends and was viewed as the most backward country in Eastern Europe. The bunkers are made of concrete and iron and, given the fact that they were built to withstand foreign invasion and can resist full tank assault, are almost impossible to destroy something their chief engineer had to vouch for by standing inside one as it was bombarded. Today they serve no real purpose, except as a reminder of a cruel past regime, and I’d say if the country had the money to remove then they would. Durres, Albania. September 9th, 2007.

When Hoxha died in 1985 his successor realised how ossified the country was and began a liberalisation programme that broadened Albania’s ties with its neighbours and the international community. This led to the relative stability the country enjoys today, a stability that has helped to attract foreign companies and is helping Albania work toward NATO and, more importantly, EU membership. 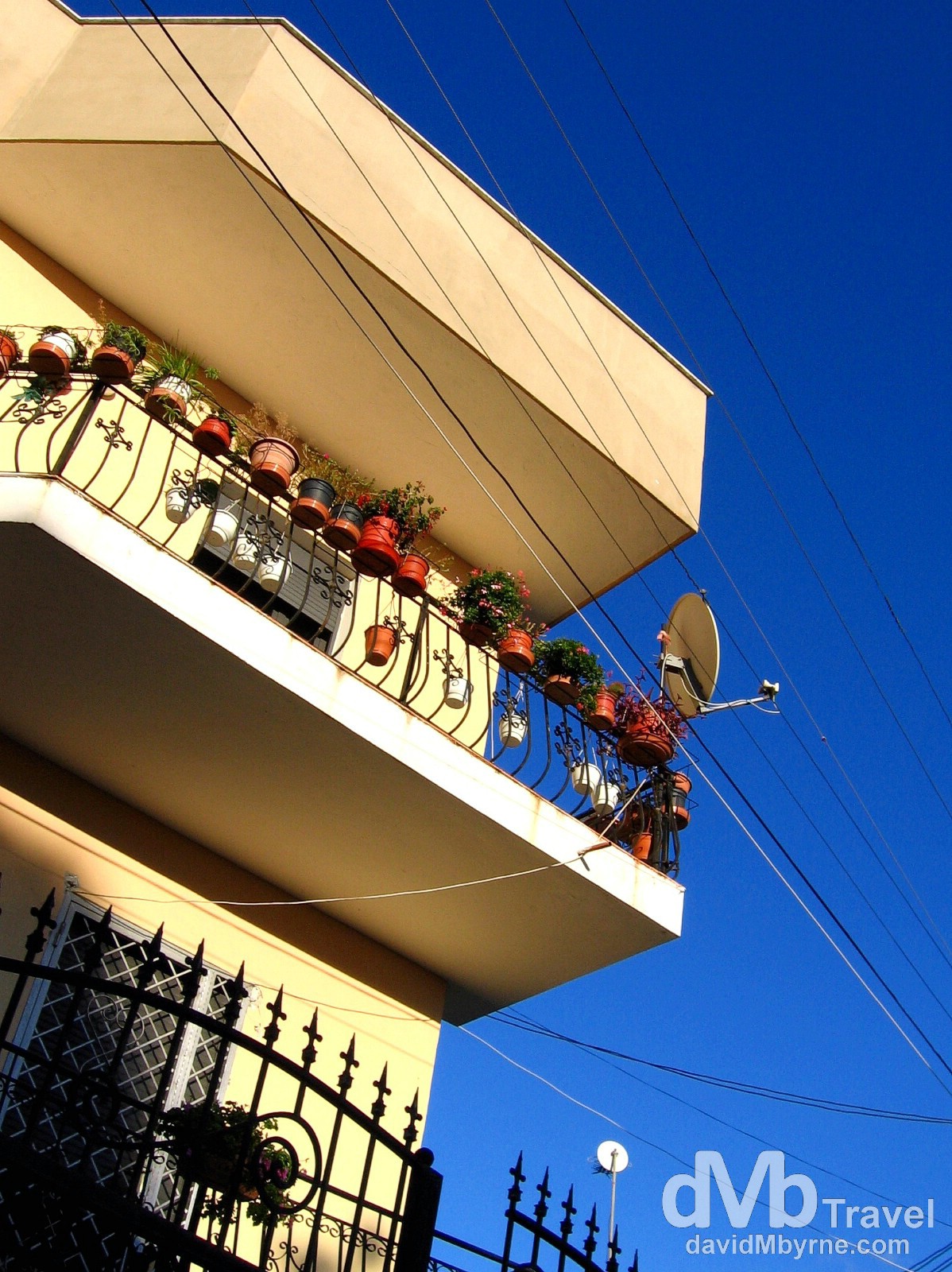 A property overlooking the sea in Durres, Albania. September 9th, 2007.

I wasn’t really in Durres long enough to make observations, aside from the obvious communist-related ones, but here are a few tidbits anyway.

· The Call To Prayer
A surprise from Albania thus far has been the abundance of mosques, something I noticed from the get-go (and you would too coming from Christian Italy). 70% of the Albanian population are Muslim & seemingly religious tolerance is an important part of the Albanian psyche.

· The not so mighty greenback
There are not one but three accepted currencies here – the local lek (about 120 to the €), the Euro and the US dollar. For everyday transactions payment is normally required in lek but hotels and bus tickets are quoted and expected to be paid for in Euro. If all else fails they will change US$ for you but only to make payment in Euro (preferably) or lek.

· Tooth ache?
Have a tooth ache? If so you could be in worst places than Durres – every second or every third establishment seems to be a dental practice. Separating the dentists are hotels, legions of them. With so many hotels one can only assume this place is a busy place at other times of the year – it’s positively dead now.