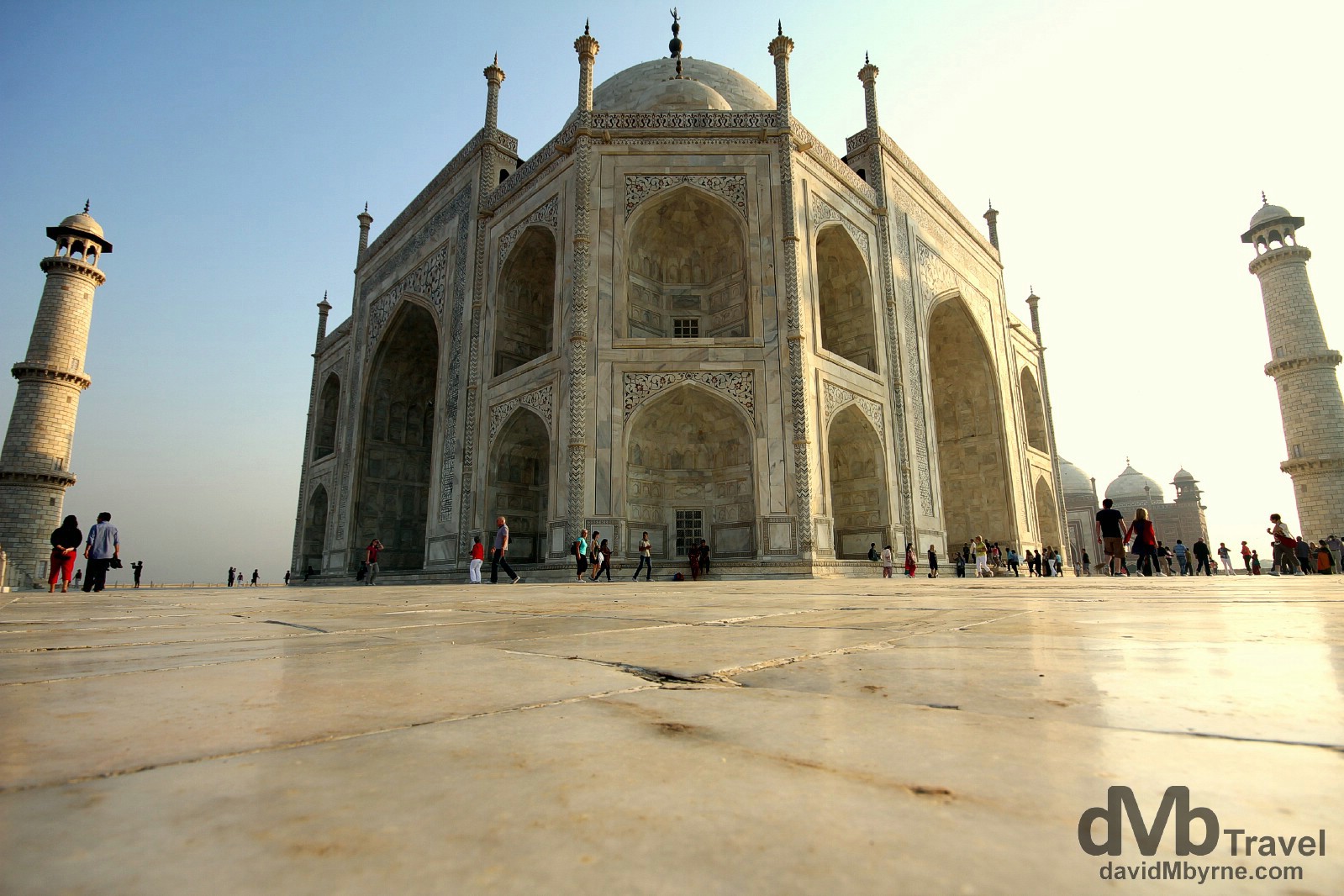 It´s still 750 rupees (€10) to visit the Taj Mahal, just like it was when I was here in 2008 & in 2002 (incidentally that is 37.5 times the 20 rupees Indians have to pay, but who’s calculating). That’s a lot of money in India but given the number of foreigners today ogling at what is probably the world’s most famous building then I’m guessing people don’t mind paying it. You can’t but be impressed with… emm, well, everything. Its size, its beauty, the craftsmanship of the extraordinary fine inlay work in its gleaming marble. Even the vast gardens the Taj stands in are awing. Yep, it´s all very impressive, marbleous even (Sorry). So I guess I didn’t mind paying another 750 rupees to see it again either. 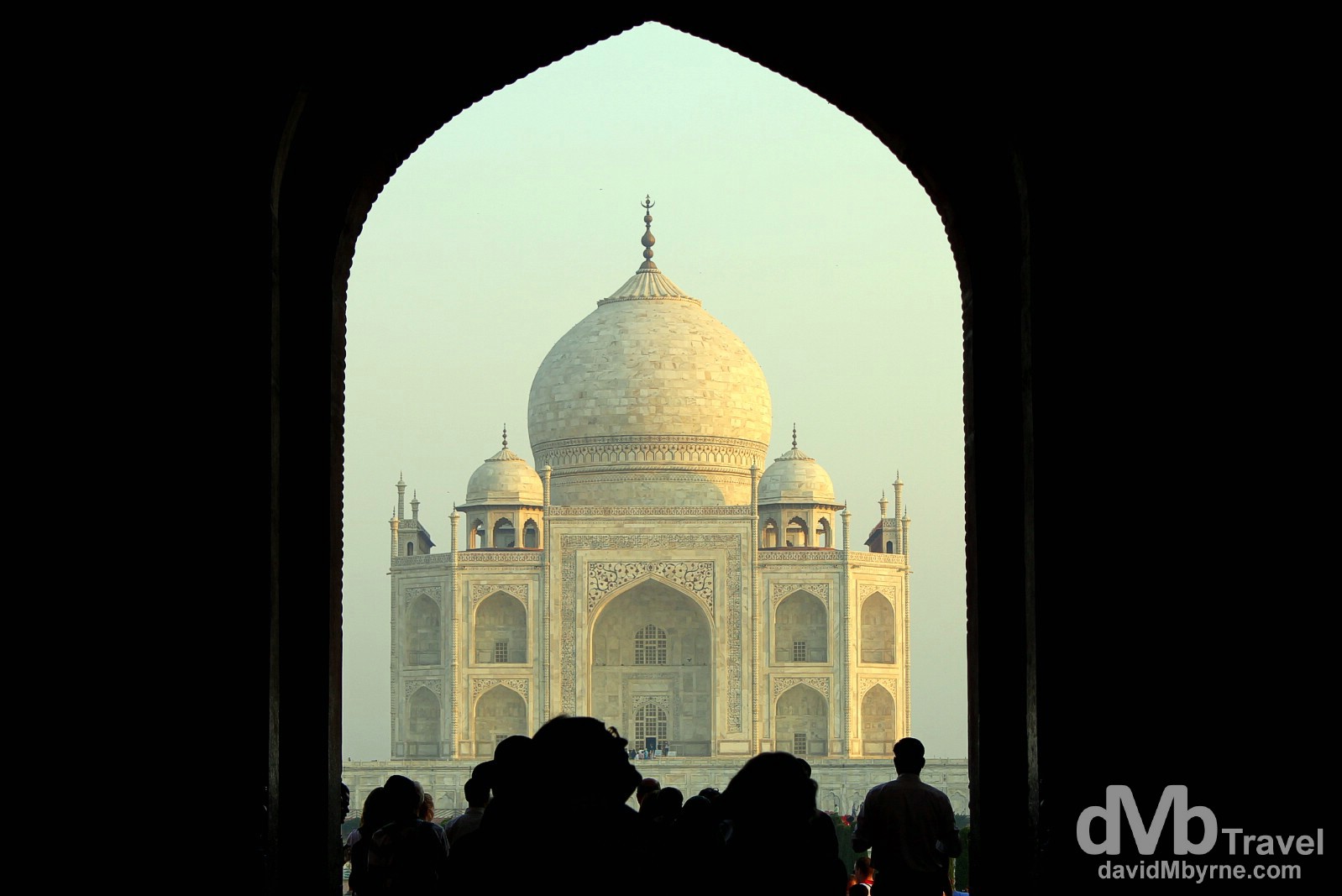 Requisite Taj Mahal shot #1 || The Taj Mahal at sunrise as seen from under the arch of the South Gate. Agra (

The embodiment of all things pure. 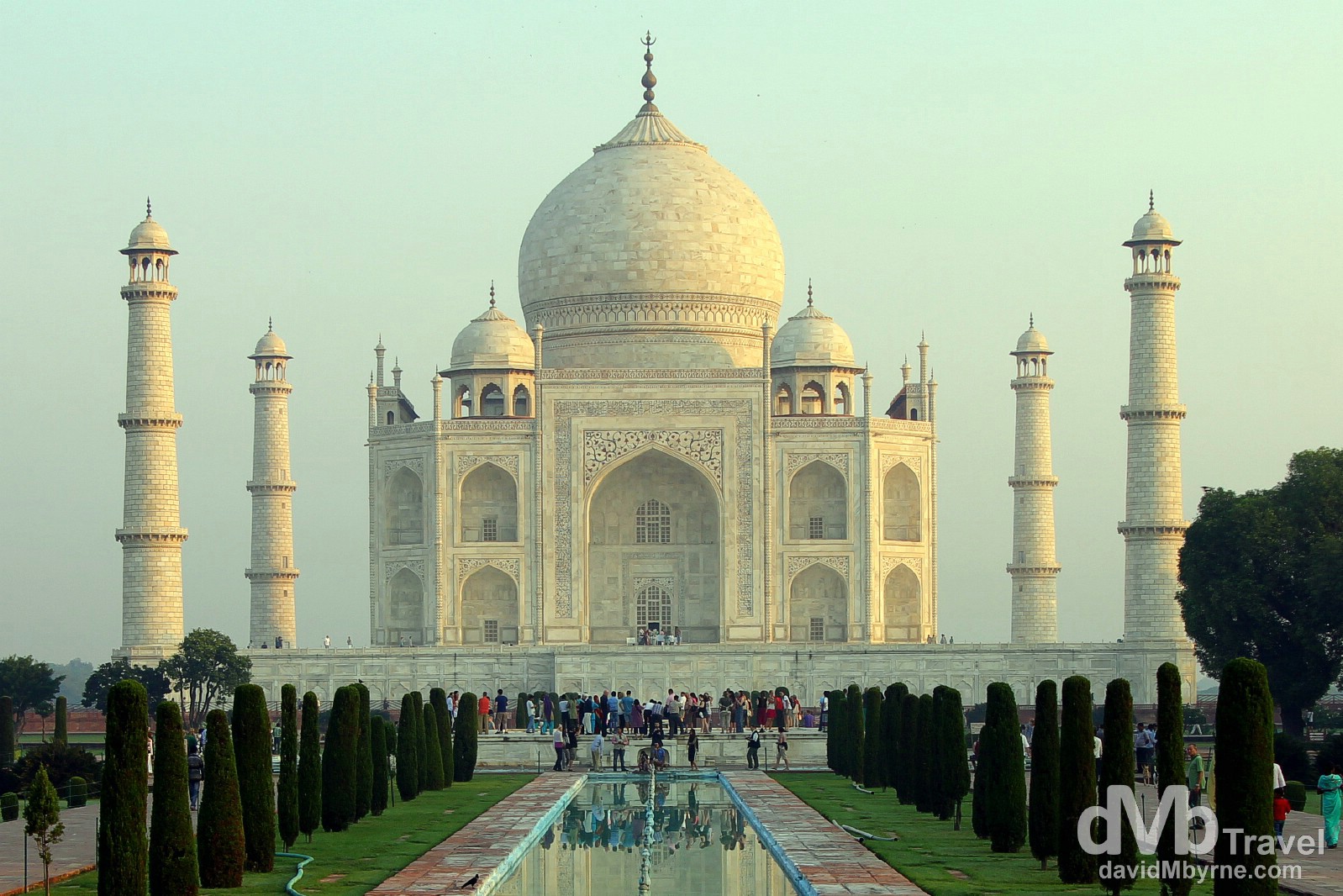 The Taj Mahal needs little to no introduction. A bulbous white marble architectural masterpiece without equal, it’s India’s top draw and one of, if not the most famous building in the world. This my my third visit to the Taj stretching back to 2002 although it was the first time I was there to capture it at sunrise. It’s still busy at that hour but needless to say it’s a magical time when the air is cool, the light soft & the early morning shadows pronounced. 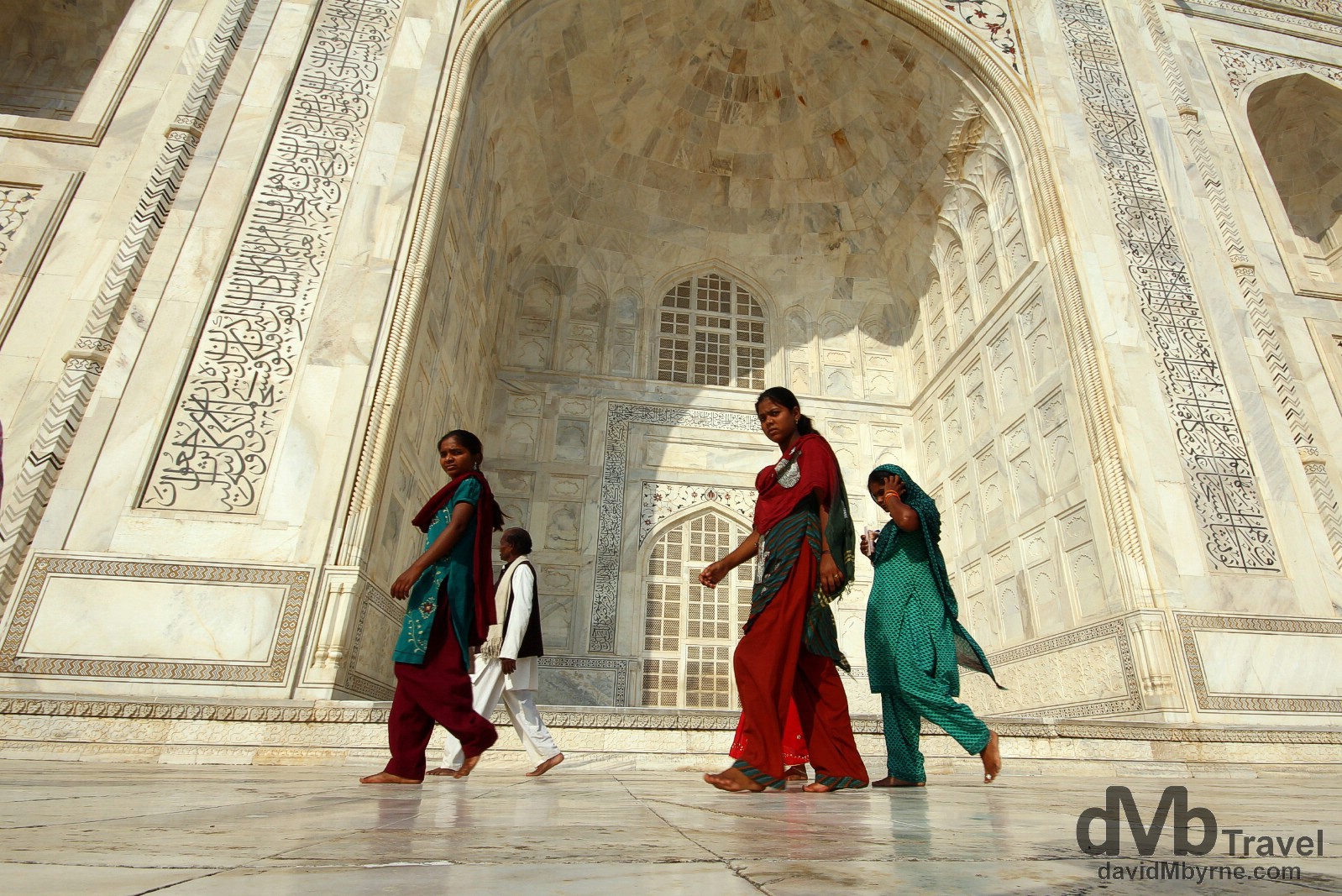 The Taj Mahal, designated a UNESCO World Heritage site in 1983, was built by the Moghul emperor Shan Jahan as a mausoleum to his favourite wife, Mumtaz Mahal, who died in 1631 shortly after giving birth to her 14th child. This makes the Taj the ultimate, most extravagant monument ever built to eternal love. Over 20,000 craftsmen from all over Asia spent 21 years (1632-1653) building what is now classed as the zenith of Moghul architecture, not to mention one of the most recognisable buildings in the world.

An immense mausoleum of white marble, built in Agra between 1631 and 1648 by order of the Mughal emperor Shah Jahan in memory of his favourite wife, the Taj Mahal is the jewel of Muslim art in India and one of the universally admired masterpieces of the world’s heritage.

– UNESCO commenting on the Taj Mahal

This image was taken shortly after sunrise from the south-eastern corner of the raised marble platform the Taj sits in the middle of. At each corner of the platform sits a 40 metre-high minaret, two of which are seen here. The minarets are purely decorative & after three centuries are not quite perpendicular. While in this wide-angle image the minarets appear to be leaning towards the Taj, they are actually leaning slightly outwards. It is speculated this is a design feature to ensure the minarets fall away from the Taj in the event of an earthquake. This picture shows well the perfect symmetry of the structure – the Taj is such that it looks identical when viewed from any of its four sides. The Taj Mahal, Agra, Uttar Pradesh, India. October 11th 2012. 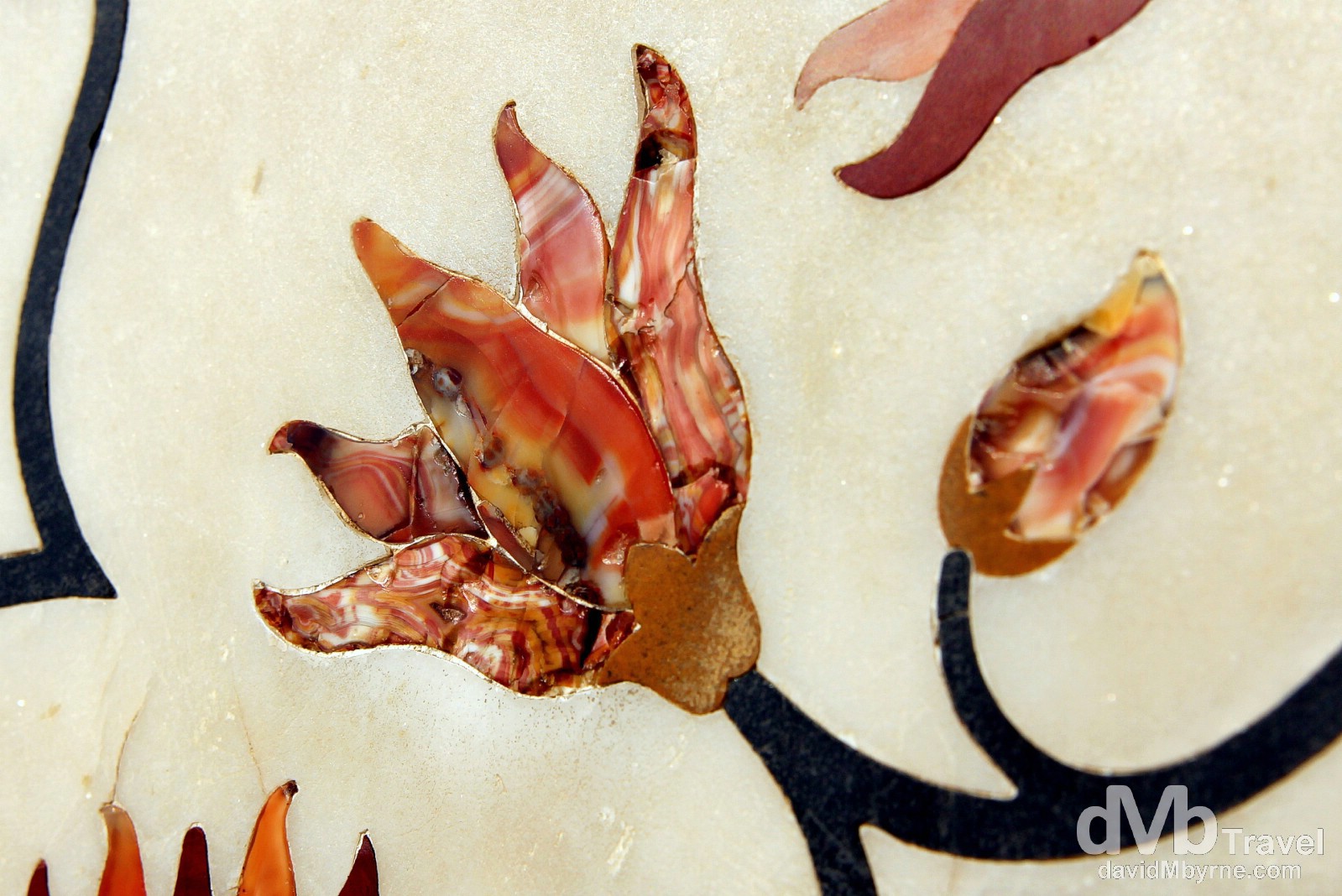 A section of the delicate marble inlay work on the face of the Taj Mahal in Agra, Uttar Pradesh, India. October 11th 2012. 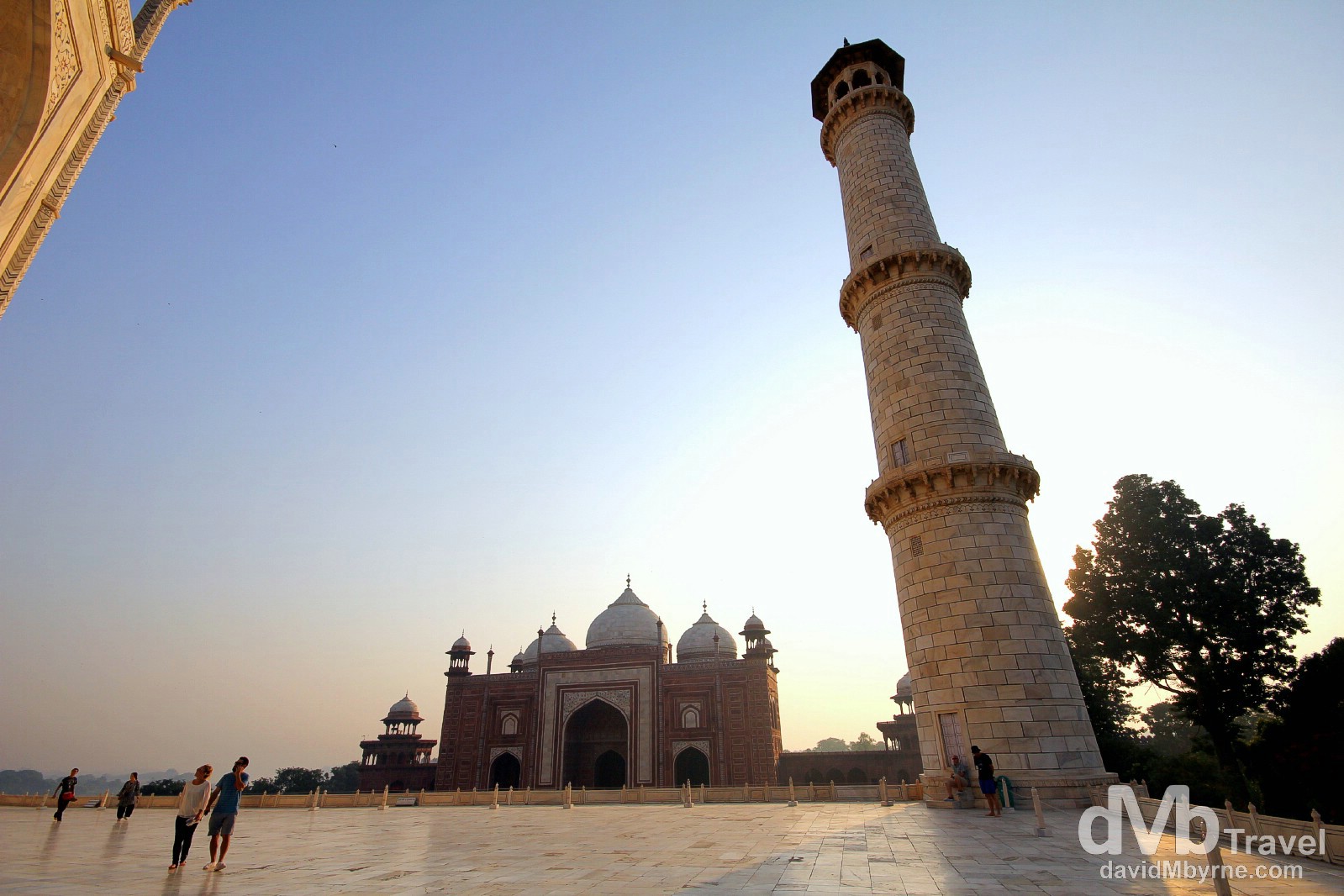 The rising sun is blocked by a minaret on the south-eastern corner of the raised marble platform upon which sits the Taj Mahal. The red sandstone building, Jawab, in the distance, situated geographically east of the Taj, is an identical replica of another building located to the west of the Taj, the latter being a working mosque & an important gathering place for Agra’s Muslims. The exact replica seen here serves no purpose other than to add symmetry. It is over-the-top extravagant extravagance, just like the Taj itself. The Taj Mahal, Agra, Uttar Pradesh, India. October 11th 2012.

The Taj Mahal is so well known & so photographed that it wouldn’t be too much of a stretch to claim it’s a building recognised even by those who haven’t visited. That makes photographing it somewhat of a challenge. People expect to see the two Taj money shots: the Taj from under the arch of the South Gate (as shown above) & the Taj as reflected in the decorative pools of the ornamental gardens fronting the structure (seen below). I got those shots too (of course I did) but I got a few others, too. 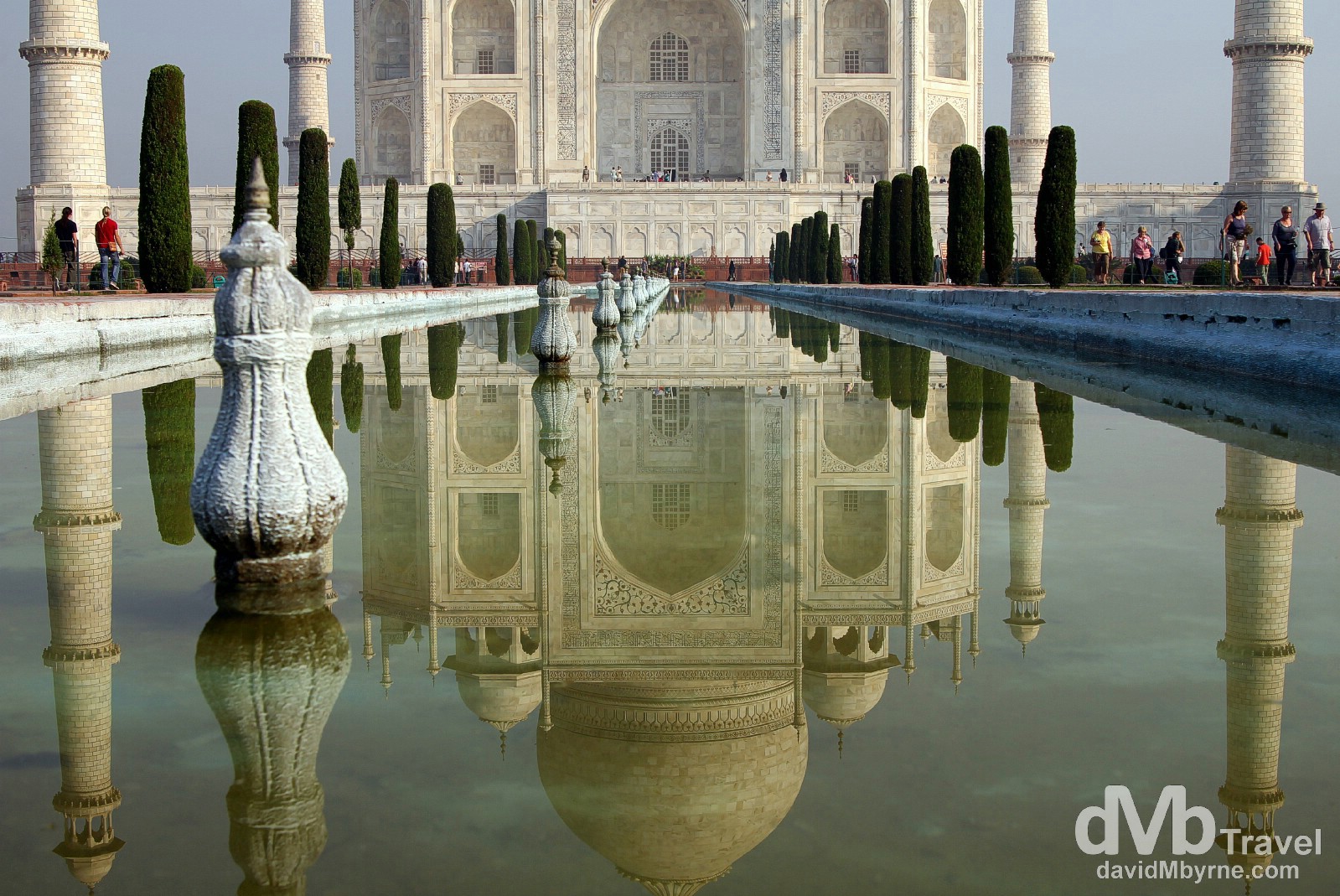 The Taj Mahal as seen reflected in the ornamental garden pool fronting it. This picture, one of many reflective pictures I captured (one must), shows the Taj reflected in the pool that sits in the ornamental gardens in front of the building. The gardens themselves were designed in a charbagh (formal Persian garden) style that was fashionable at the time of the Tajs’ construction. The garden layout, dissected, as it is, into 4 quadrants by waterways, evokes the Islamic image of The Garden of Paradise. Agra, Uttar Pradesh, India. October 11th 2012. 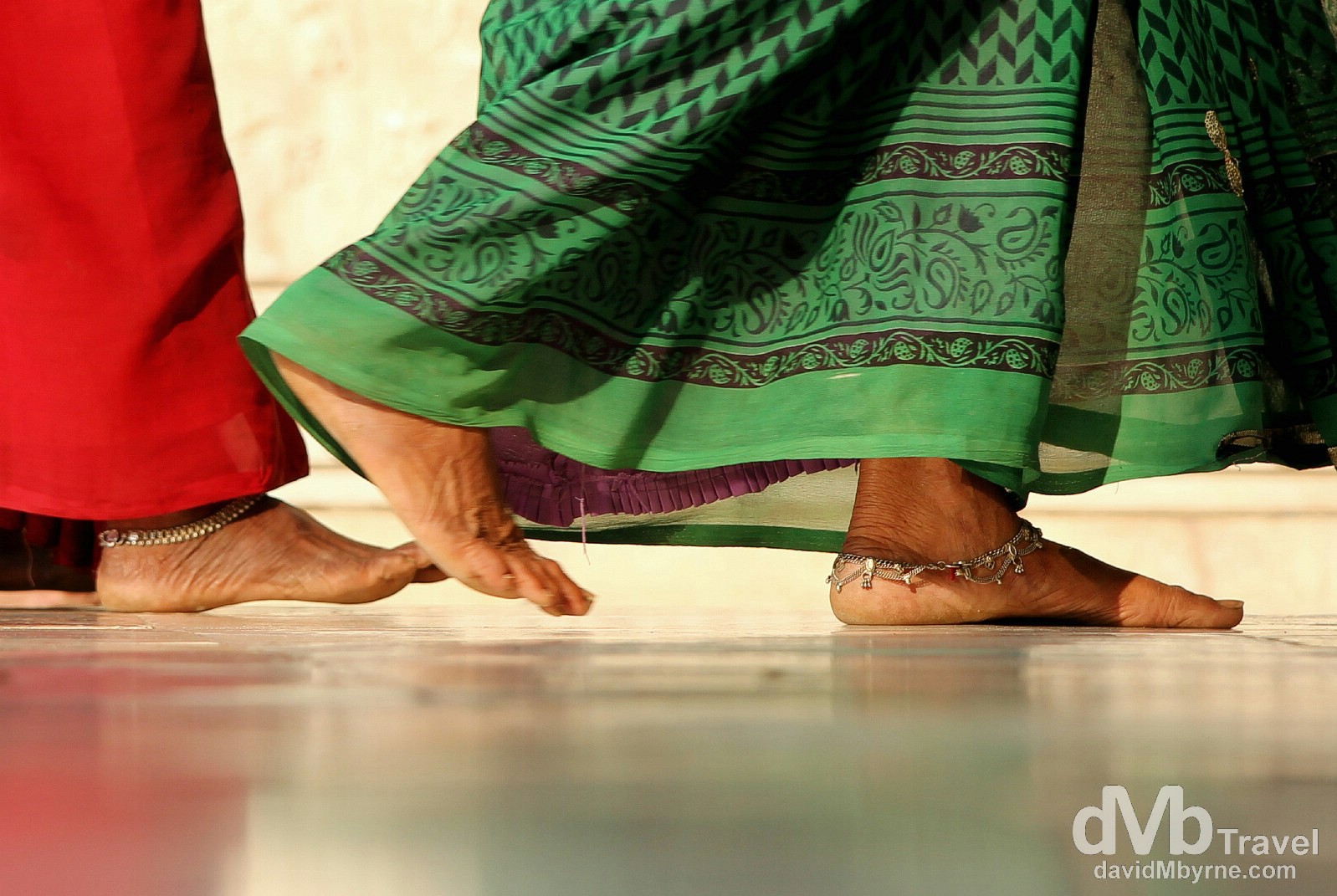 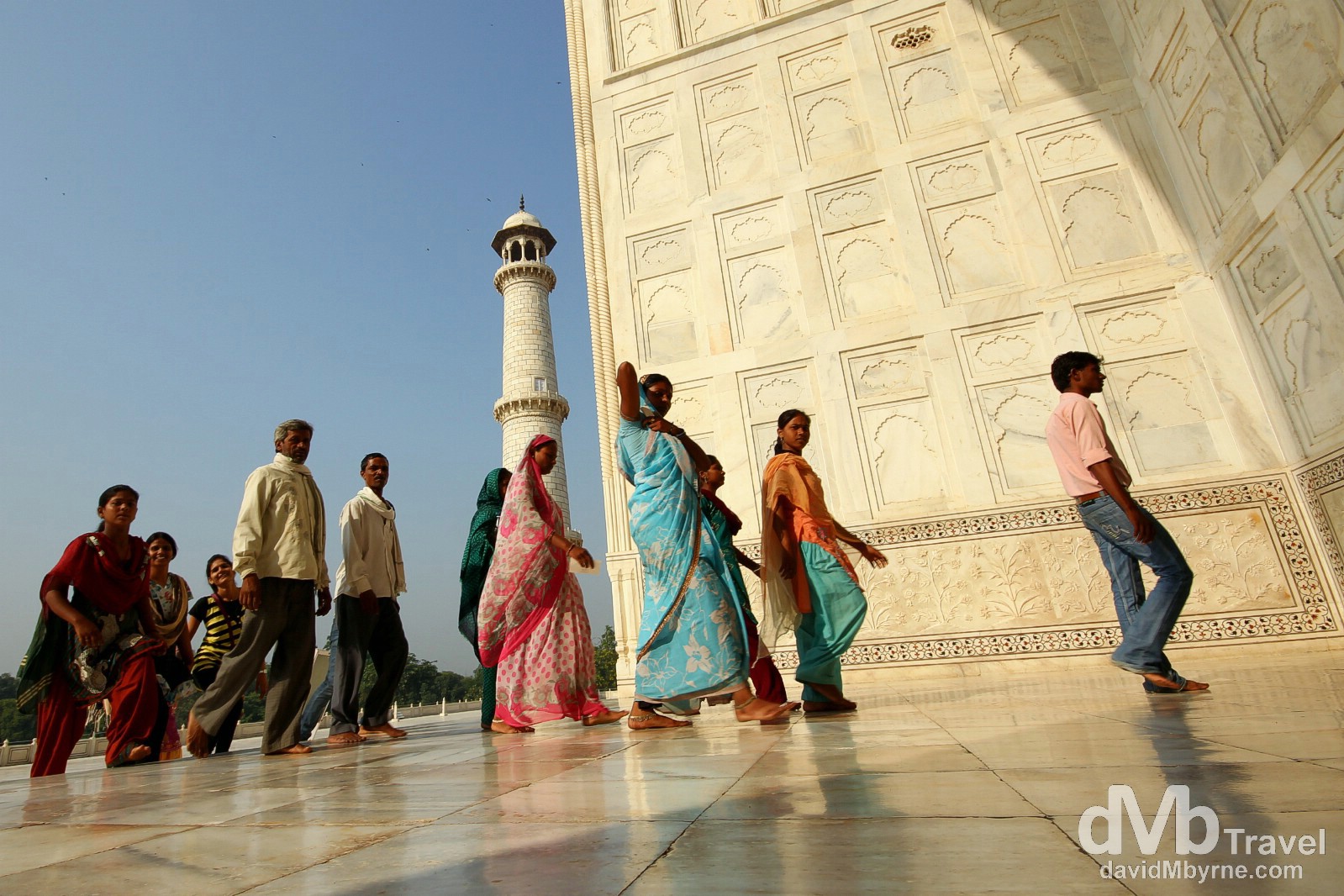 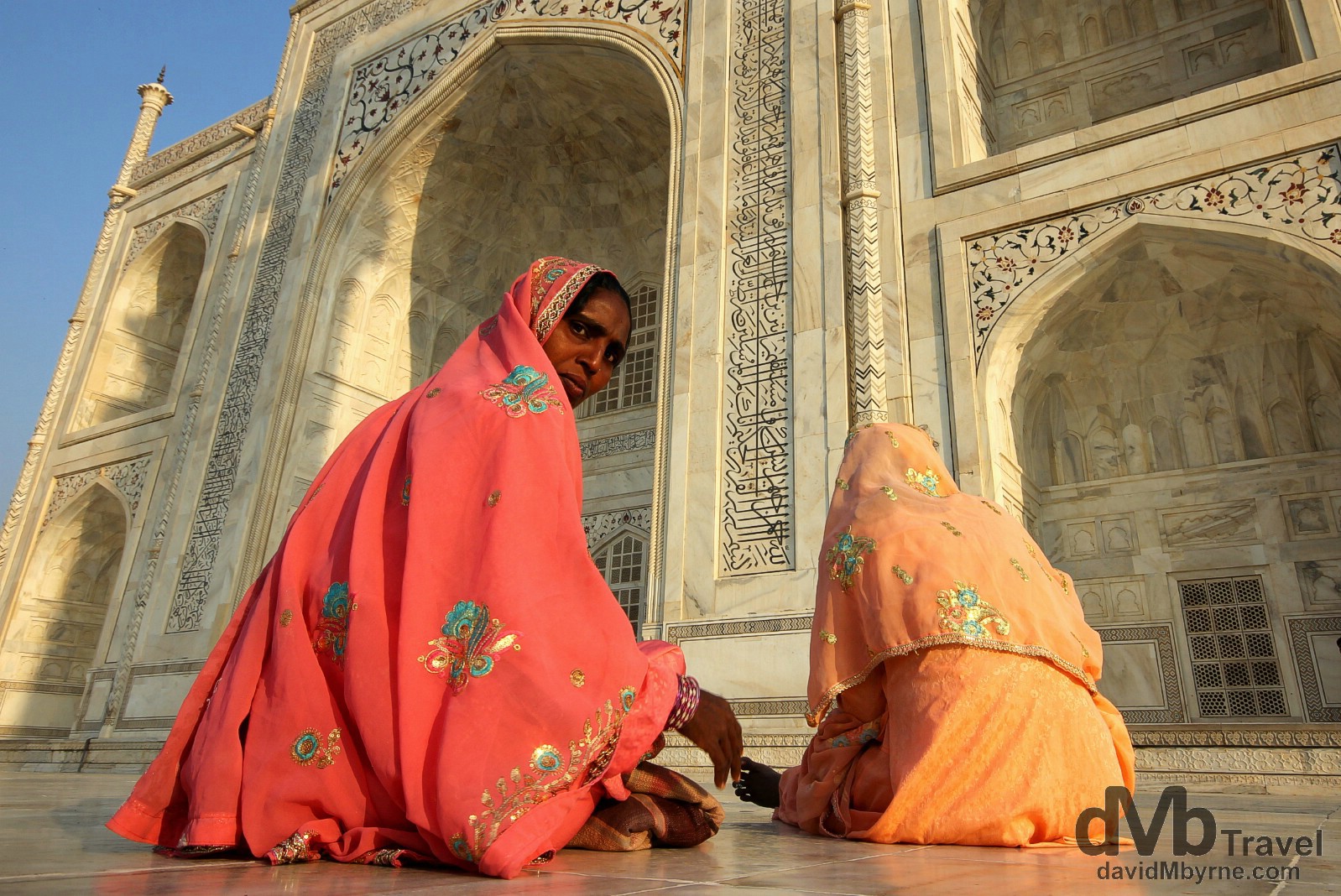 Today wasn’t all about the marbleous white marble marvel. Gorgeous, colourful saris set against the white of the Taj itself, not to mention set against the raised white-marble platform in the middle of the ornamental gardens fronting the Taj, the place where everyone gathers to capture the requisite ‘I was there’ shot, were hard to resist pointing a camera at. 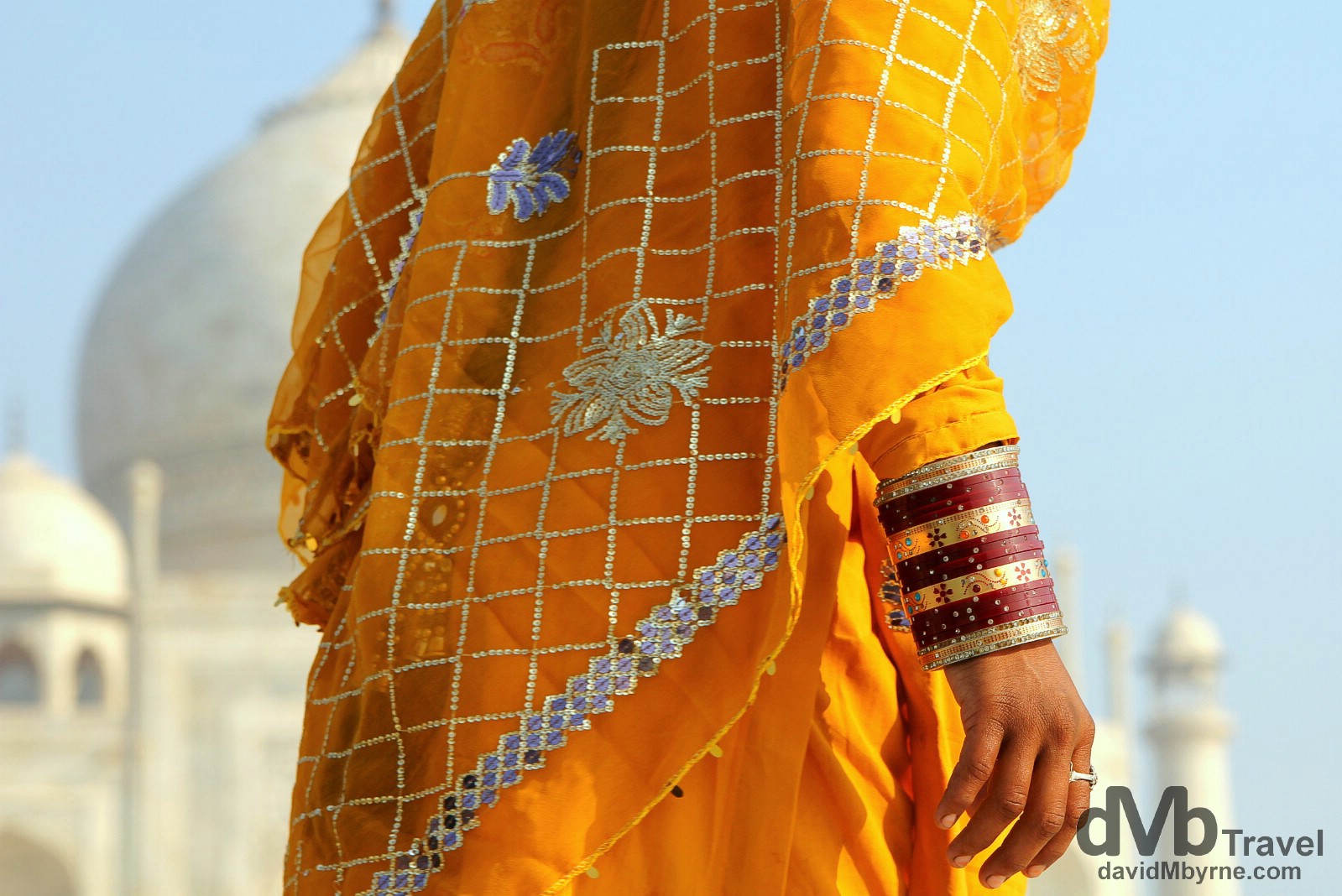 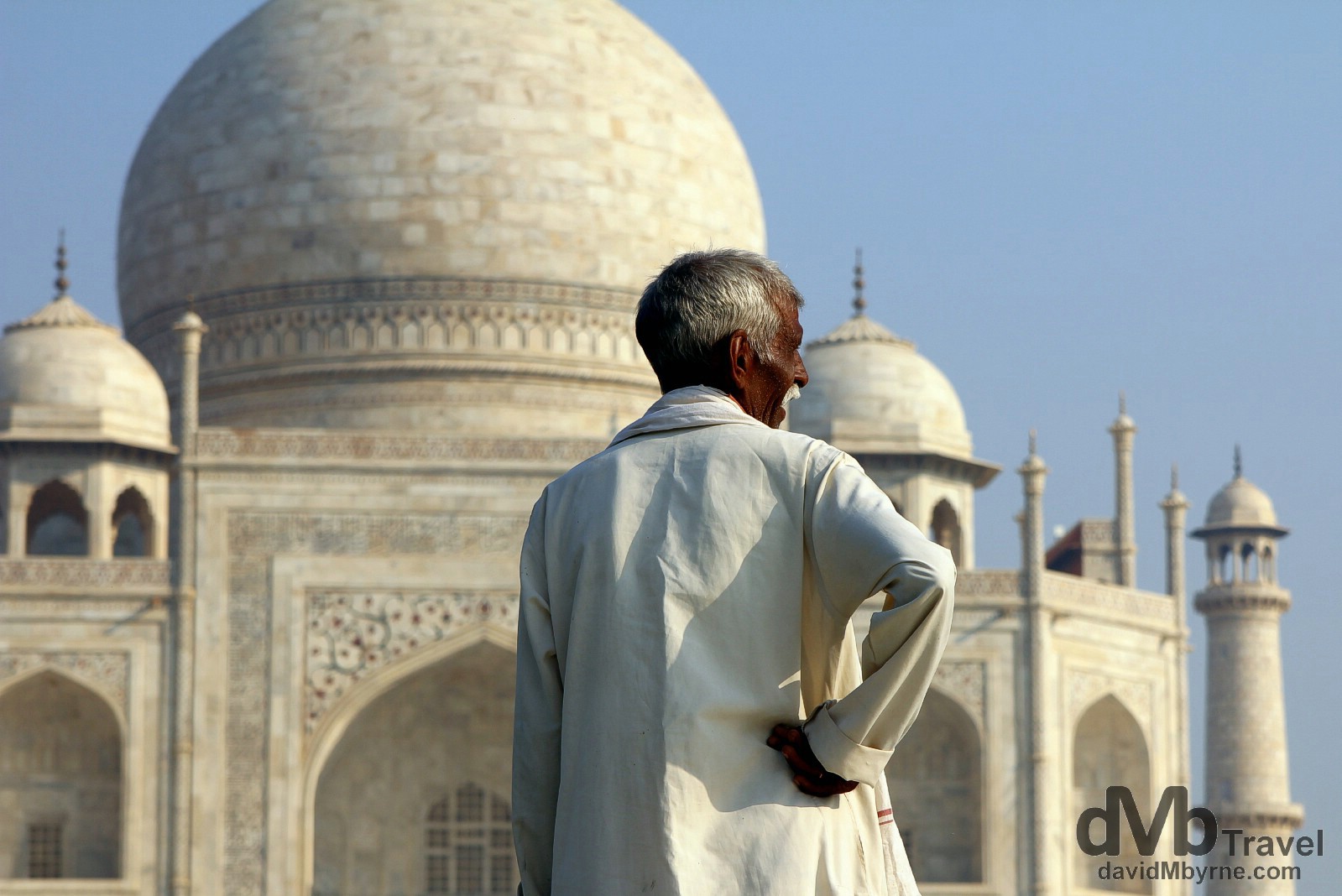 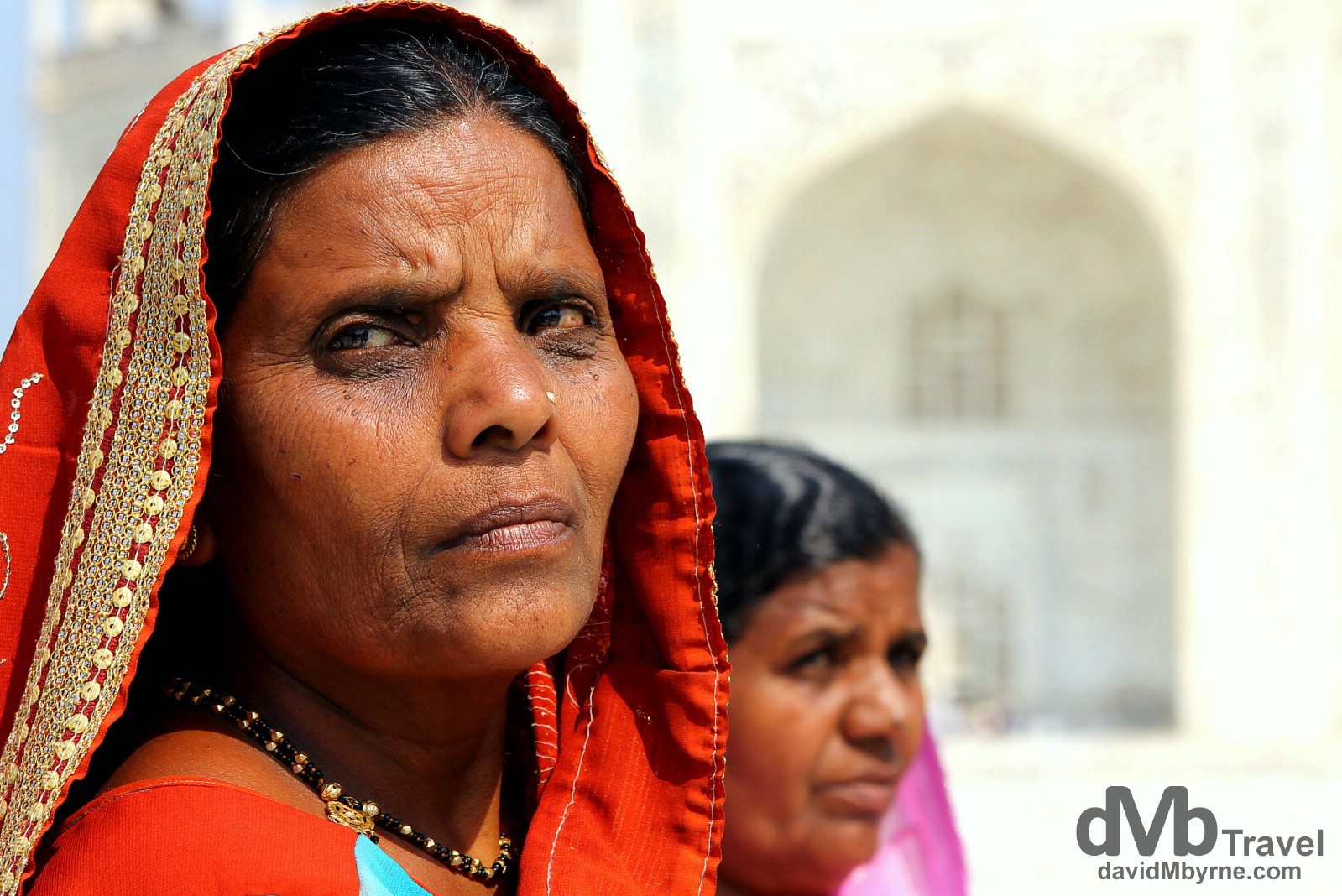