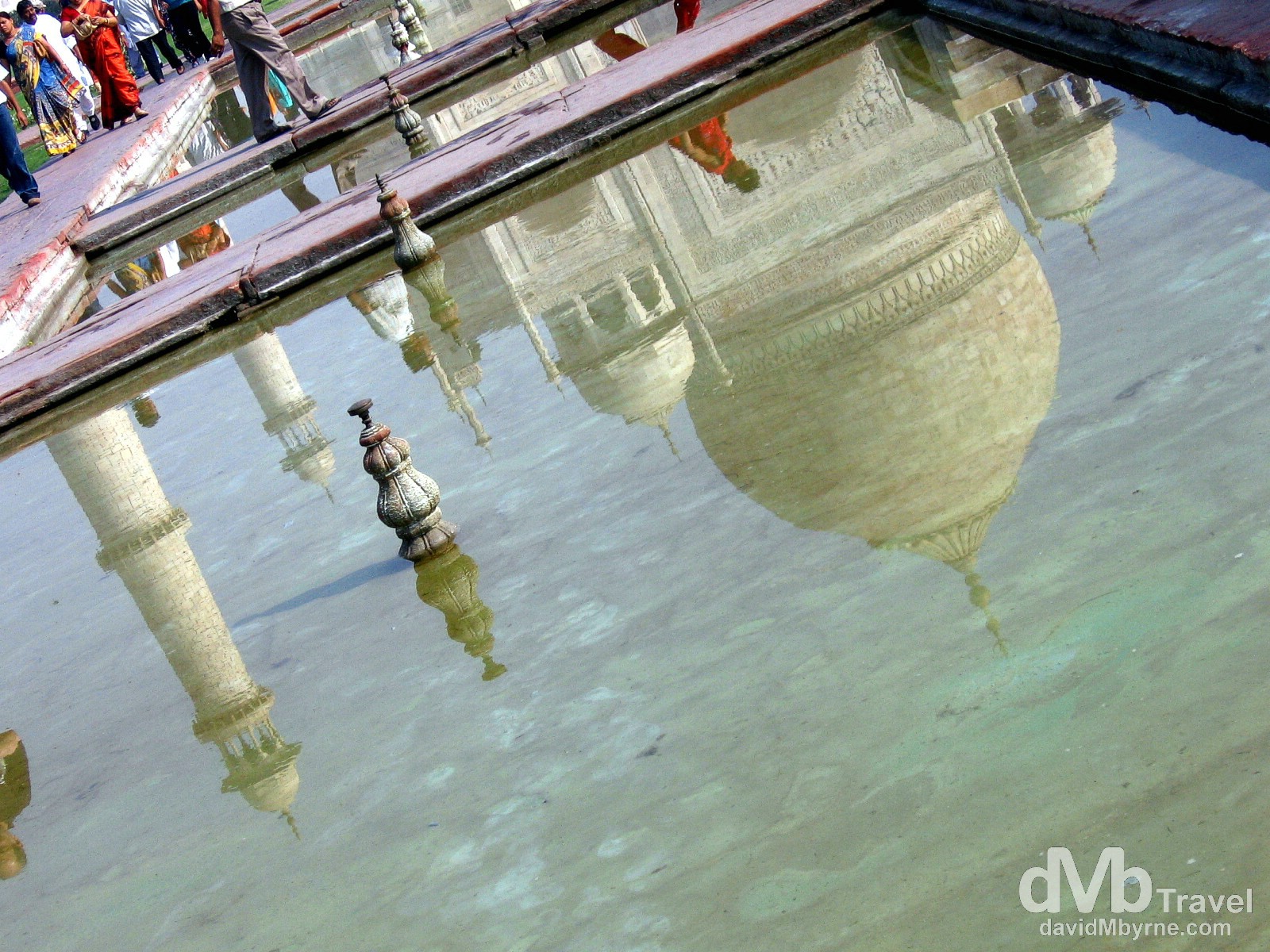 It´s still 750 rupees to get into the Taj Mahal, just like it was 5-and-a-half years ago. That´s over €12, a lot of money in India. My guidebook calls the price `galling´ (good word) but it does go on to say that most foreigners don´t actually mind paying the fee once they cast their eyes on the Taj itself and see how Marble-ous it is (Pats play on the word marvelous). And it is. 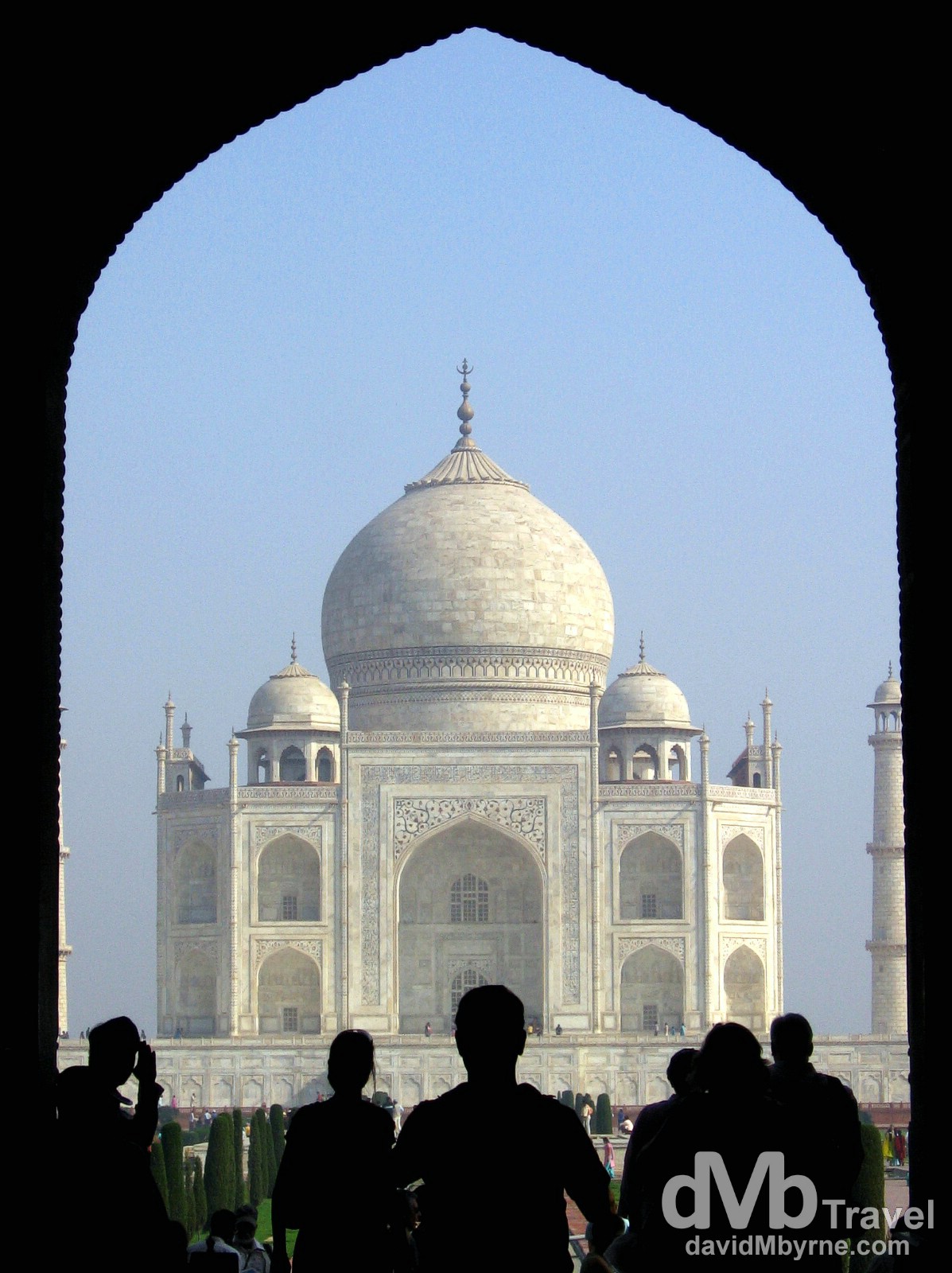 An immense mausoleum of white marble, built in Agra between 1631 and 1648 by order of the Mughal emperor Shah Jahan in memory of his favourite wife, the Taj Mahal is the jewel of Muslim art in India and one of the universally admired masterpieces of the world’s heritage.

– UNESCO commenting on the Taj Mahal

Marbleous
You can´t but be impressed with the Taj Mahal. Everything about it, but particularly its size, its beauty and the craftsmanship of the extraordinary fine inlay work in its marble, is breathtaking. Even the vast gardens the Taj stands in are awing. Yep, it´s all very impressive alright so I guess we didn’t mind paying over €12 to see it again either. What we did mind however was the fact that we were frisked getting in the Taj complex and that we couldn’t bring anything besides ourselves in either. No bags, no books (we were told they could “hold a bomb”) and get this, no mp3 players (no excuse given). The book thing pissed us off as we had the whole day in Agra – a city 2 hours south-east of Delhi that has the good fortune of being the site of the Taj, but little else going for it – and we intended to spend some time reading in the Taj gardens. That would have helped us kill some of the 12 hours we had in the city and would have kept us from having to deal for too long with Agra itself which, even by Indian standards, is a hole. Anyway, we managed to hang around the Taj gardens, with seemingly half of India keeping us company, until 2 p.m. by which time hunger had gotten the better of us forcing us out on the streets. Killing 6 and a bit hours in Agra isn´t easy but we managed it thanks to the restaurant of Hotel Sheela, an internet café, a visit to a city park (where we were of intense interest to the locals and where Pat said it felt good to get a cricket bat back in his hands), a brief walk around the Taj Ganj area of the city and a 3 hour wait in a waiting room in Agra train station. It was then back to Delhi to get ready for tomorrows departure for the beaches of Goa. Pat´s getting excited to get there, even if we´ll have to spend the best part of 2 days (37 to 40 hours) and two nights on a train to get there.

“Almost Goa, Goa-ing, gone,” is what he came out with today. Following hot on the heals of“Marble-ous” that makes 2 classics in the one day. 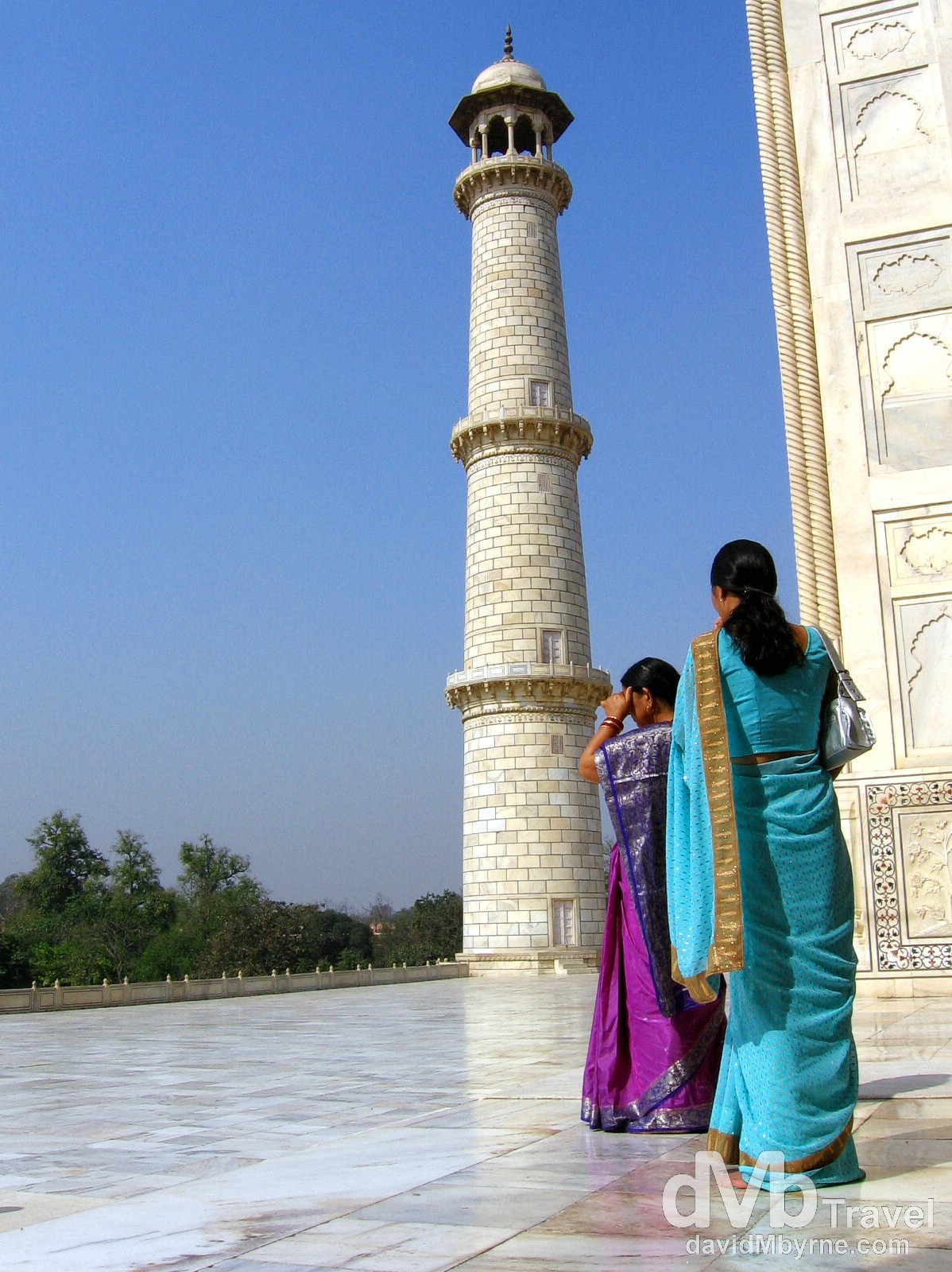 Recent Observations
· Free
They may charge foreigners 750 rupees to get into the Taj (Indians pay 20 rupees) but at least they give you a 4 rupee bottle of water for `free´ to help you on your way. Oh, and they also give you hair-net style feet coverings for walking on the raised marble platform the Taj sits on. Plus foreigners don´t have to pay to use the toilets on-site (Indians do). However, 5 rupees to visit the small on-site Taj museum was 5 rupees too much for us having forked over 750 rupees to get in. We said no on principle, of course, not because we´re tight asses. 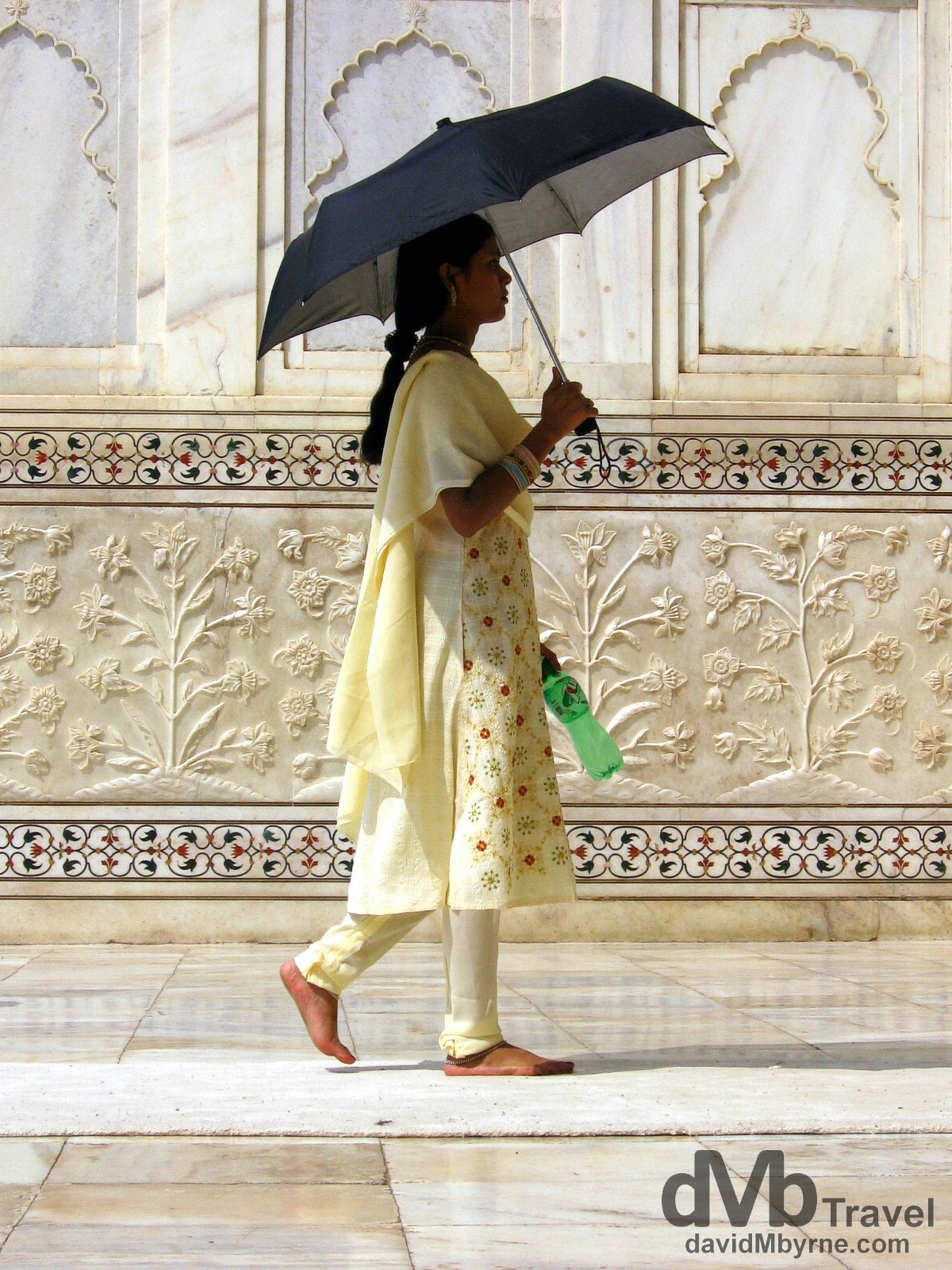 · Smile
It´s funny seeing Indians trying to take `secret´ pictures of us. It always has been. They are never subtle enough and obviously need more practice. As we were sitting outside the Taj today and watching the world go by an Indian boy sits down beside me while his mate, a few yards away, pretends to take a picture of something in our general direction. `It´s okay to ask´ I thought before throwing my arm around the guy, bringing a big smile from the photographer who then came a little closer for a better, non-secretive picture of that winning smile of mine. 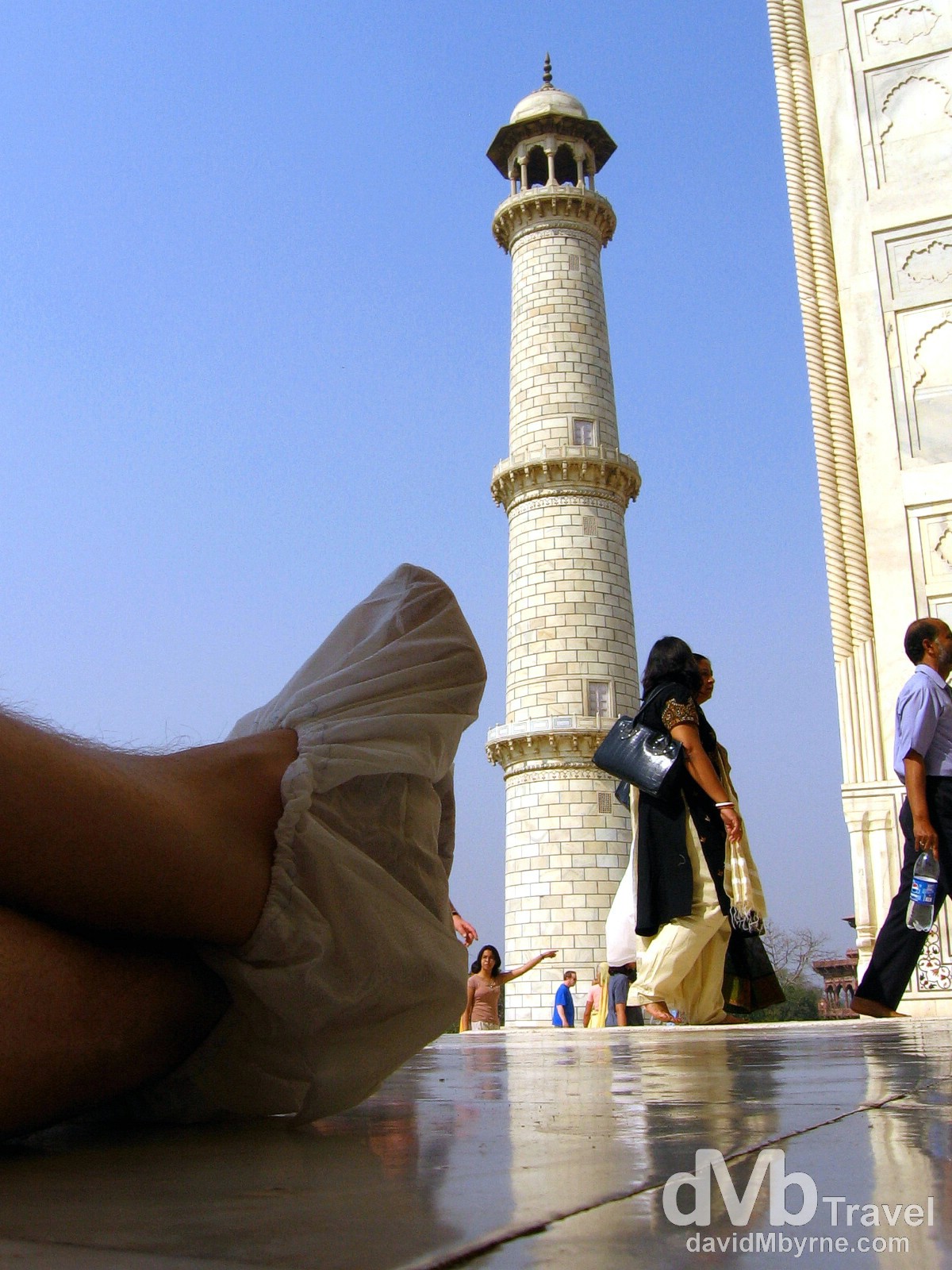 Watching the world go by outside the central chamber of the Taj Mahal, Agra, Uttar Pradesh, India. March 25, 2008.

· No offense
Pat and I were standing in the central chamber of the Taj earlier today looking at the marble (what else) tombs of Shan Jahan & Mumtaz Mahal when I said to Pat,

“Here lad, no offense and all but here I am in the ultimate monument to eternal love and I have you beside me.”

“Yeah well, we know who´s to blame for that, don´t we Dave?”

“I suppose Lad. But let´s not mention her, right?” 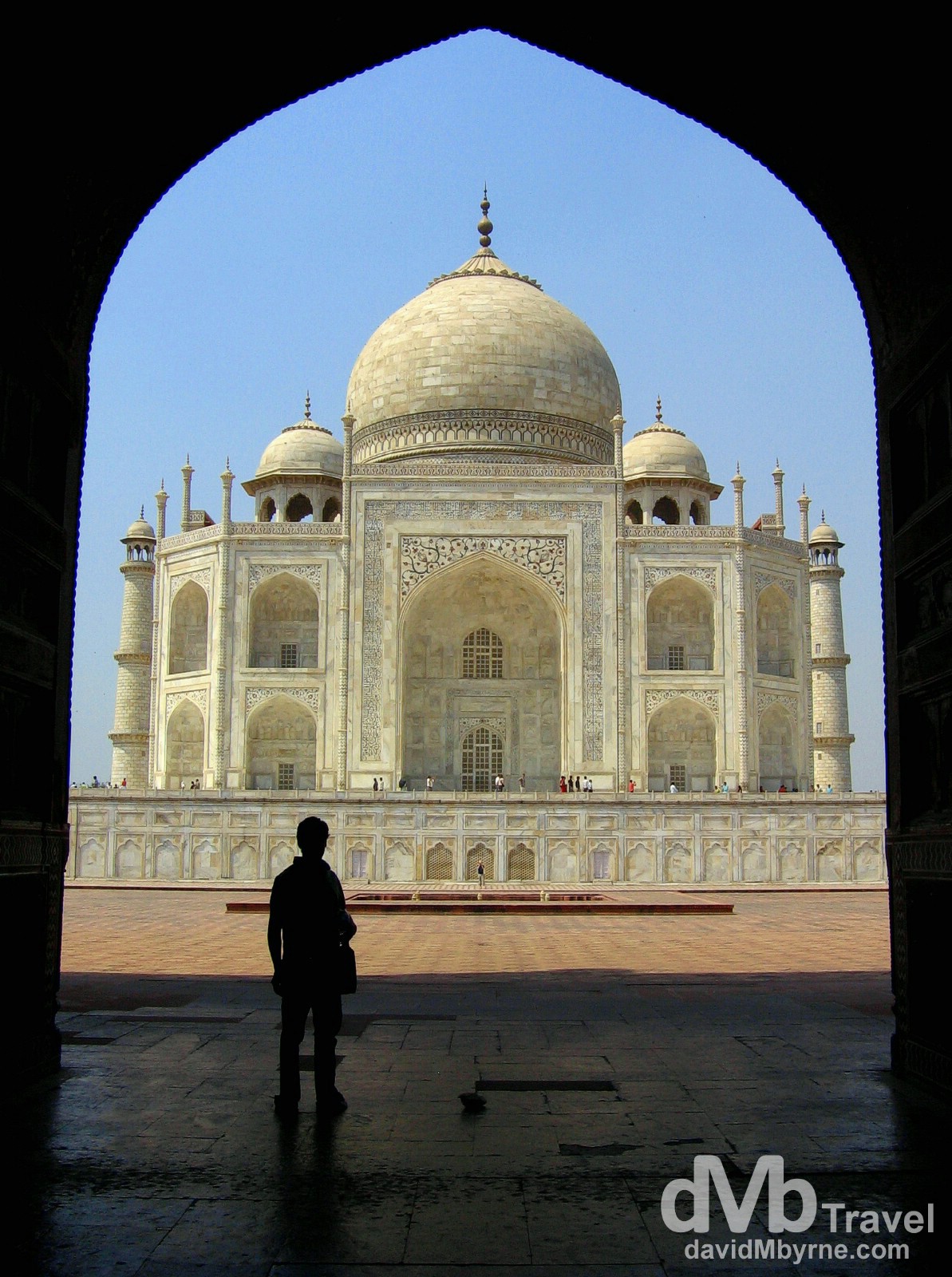 · Good call
“It was a good idea not to spend the night here Dave,” Pat commented as we walked the disheveled lanes of Agra. Just one of the benefits of having been here before I guess.