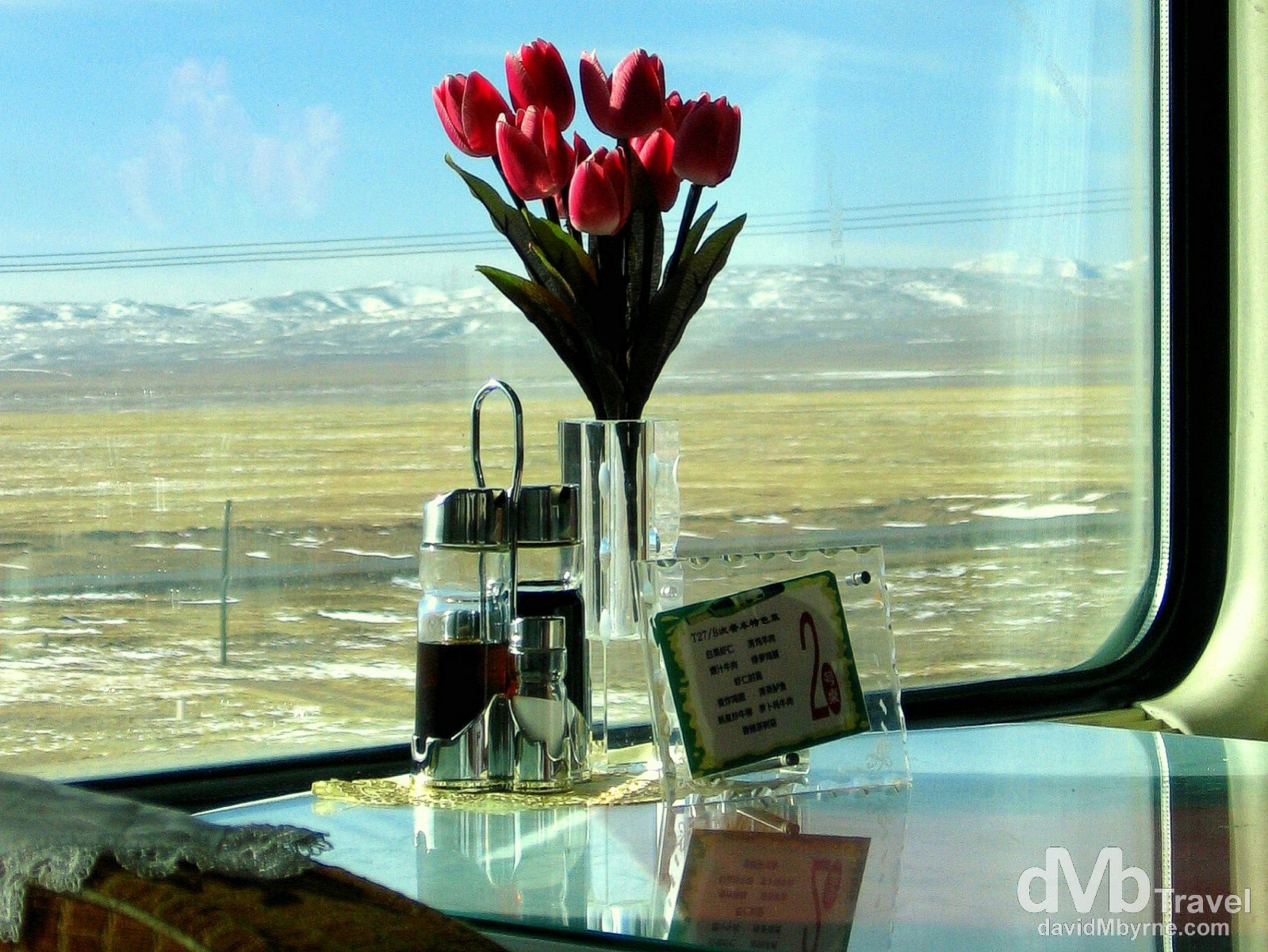 We made it out of Xi’an as planned, made it onto the train for Lhasa, Tibet, as planned, and all without needing (yet) to produce the permits we acquired in Xi’an to enable us to undertake this trip legally. We left Xi’an yesterday, Saturday, morning and it’s now noon on Sunday. We’ve been on this train now for 27 hours. For me at least the time has flown by.

Crossing the Tibetan Plateau as seen from the dining car of the Qinghai–Tibet Railway, a.k.a. the Sky Train, the Lhasa Express, the Rocket to the Rooftop of the World. Call it what you will but make no mistake, it is the world’s highest railway – they even give you oxygen. Northern Tibetan Plateau, Tibet. February 24th, 2008.

I’m sitting breathing in the oxygen that is been supplied to us by the on board oxygen outlets – the subtle albeit ever-present hissing noise is the giveaway. We’re passing through the world’s highest and one of the worlds most isolated regions, the Tibetan Plateau (average altitude of 4,500 metres (15,000 ft)), on the not-yet-two-year-old Qinghai-Tibet Railway, most of which is running at altitudes over 4,000 metres (13,000 ft). The total length of the line from Xining in China’s Qinghai province to Lhasa, Tibet, is just shy of 2,000 kilometres – 1,956 kilometres to be precise. The first bit of line, the 815 kilometres of track from Xining (

), also in Qinghai province, was laid way back in 1984, with the remaining 1,118 kilometres of track the rest of the way to Lhasa (

) having only been completed in mid-2006. That 1,118 kilometres of track was quite the feat of engineering. As the Chinese themselves are quick to remind anyone, many so-called international experts said the building of the railway over ground, the majority of which is frozen, couldn’t be done. Even the Swiss, the world’s best tunnel builders, said the need for tunnels through ice-mountains alone made the construction of the railway an impossible task. So I’ve no doubt then that a few in-your-face Chinese fingers were raised to the naysayers when the first passenger services began on July 1st, 2006.

We’re not sure if we’ve yet passed over the 5,072-metre (16,640 ft) Tanggula pass, the highest part of the trip, but even if we haven’t we doubt we’ll know when we do. We’ll know for sure when we get to Lhasa though, the capital of Tibet, and we’re both looking forward to that. The lure of the place is matched by few places on earth – the sheer isolation, the fact that it was closed off to the west for most of its existence, and the religious monuments that turned the whole region into the Buddhist kingdom it is today, a kingdom that so intoxicated early western travellers. Shangri-la, locked away in its mountain fortress in the Himalayas, here we come. 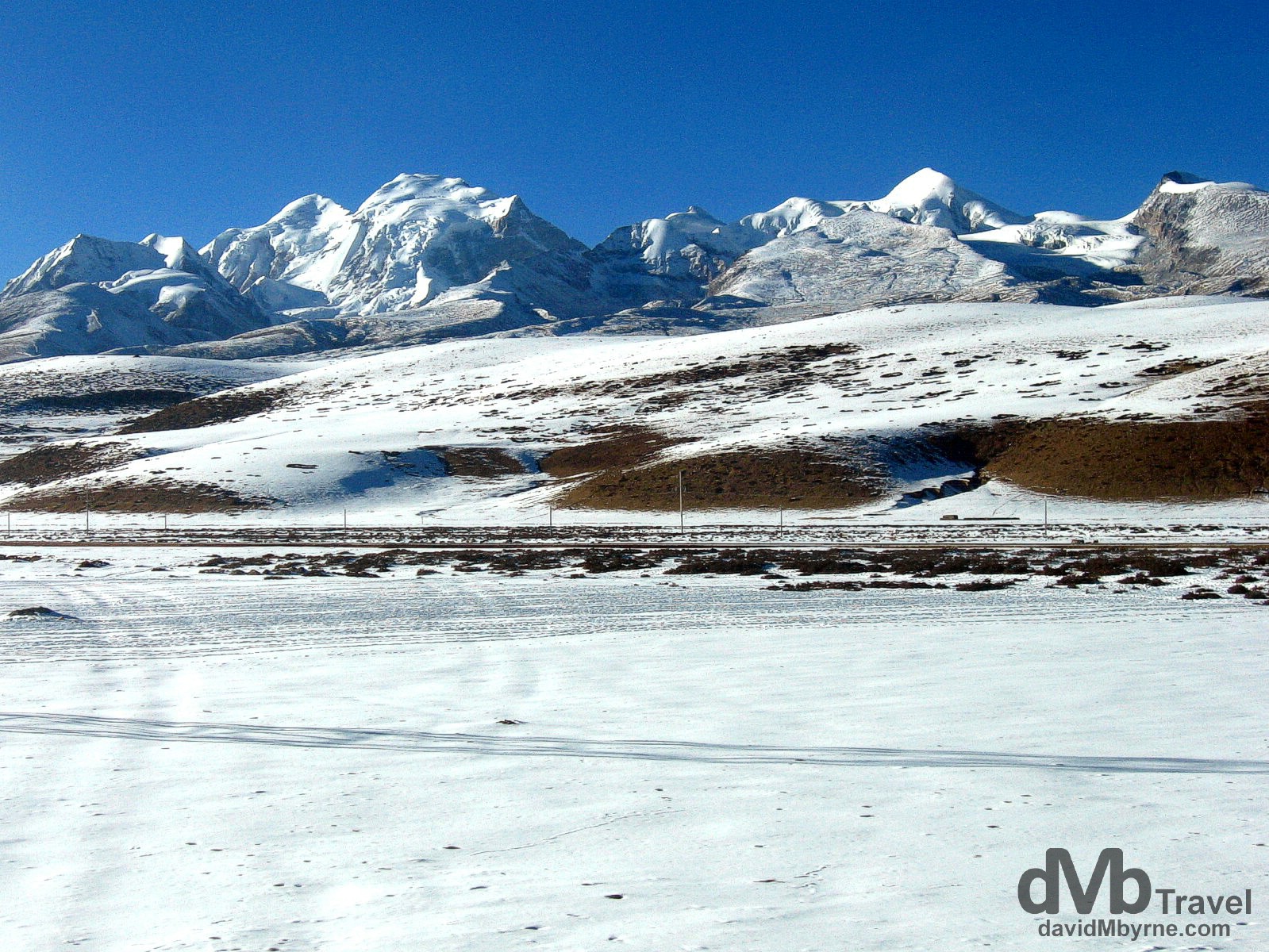 The scenery we’ve been passing through on the Tibetan Plateau, while starkly beautiful, is desolate & very inhospitable. It got Pat & I to talking as to why anyone would actually want to lay claim to it. Today this part of the world is, officially anyway, part of China, but Taiwan also has a claim on it. The Tibetans themselves don’t seem to have any say whatsoever and therein lies the problem. They’ve never really had it easy. A series of kings ruled the country from the 7th to the 11th century and by the end of the 1230s the Mongols (Genghis, Kublai etc.) turned their attention to Tibet and ruled it, on and off, for centuries. During this time Tibetan lamas (Tibetan priests) gained considerable influence and it was in 1578 that the Mongols introduced the first Dalai Lama, commonly known as spiritual leader of the region and the predominant political power who administered religious and administrative authority from the traditional Tibetan capital of Lhasa (it wasn’t until the 1630s however that the massive conversion of the Mongols to Buddhism took place). Various invasions took place over the coming centuries and the Brits, under the command Francis Younghusband, invaded in 1904 only to abandon the county in 1947. A period of self-rule followed until the Chinese invaded (the Chinese themselves preferring the word ‘liberated’) the region in 1950. Unrest among the Dalai Lama-following Tibetans and the ruling Chinese was always an issue during the early Chinese years, unrest that culminated with the Dalai Lama and his entourage fleeing to India, where they remain today, in March 1959. The years following 1959 have been rougher that most for Tibet, its people, its culture and its religious buildings have been savagely oppressed – in 1959 there were 2700 monasteries and temples in Tibet but by 1978 there were just eight monasteries and fewer than a thousand monks and nuns – & today Tibet is a sad, oppressed region of China. The influx of Han Chinese (traditional Chinese, making up 93% of the Chinese 1.3 billion population) into the region (helped by this train I’m presently sitting on) is slowly killing off old Tibetan traditions and values. Even so, Tibetans still hope for independence and for the return from exile of the Dalai Lama, although no one expects it to happen any day soon, the Dalai Lama himself included. Typical Tibetan Plateau scenery as seen from the Qinghai–Tibet Railway. February 24th, 2008.

I‘m guesstimating we’ve still some 9 hours to go until we arrive in Lhasa, time we’ll spend continuing to sit here watching the clock and the monotonous white scenery ride by (it’s very similar, if a little bit more hilly, to the Gobi desert scenery I experienced on a similar train journey through Mongolia on the Trans-Mongolian/Siberian two years ago). We’ll eat the rest of our bananas, drink the rest of our water and every now and then saunter down into the dining car only to be told what we want to order off the menu isn’t actually available, and if it is available then it actually costs twice the listed menu price. Tourist price no doubt. Oh the toils of travel. The toils of life riding the rails.

· We’re Doctors
We had to sign a health waiver upon boarding the train yesterday, one on which we had to tick the box that stated

That got us wondering, can it? The form also listed ailments that one might have that are most definitely not suited to high altitude travel. The old reliables of heart disease and high blood pressure where on the list, but it also included the following (typed here exactly as they were seen on the form):

We guess they are just covering their ass. Happy travels.

· Thin Air
Following on from that, the air is thin up here, even in the oxygen supplied carriages. We’ve just passed a sign telling us the elevation is 4,580 metres (15,100 ft) and as I type I personally have a slight lightheadedness and feel myself breathing that bit faster, sensations most get at these altitudes (I experienced something similar on the 4,205-metre (13,796 ft) summit of Mauna Kea on the Big Island of Hawaii, the highest point in the Pacific and the highest I’d ever been with my feet firmly on dry land before today). As long as it doesn’t get any worse than slight lightheadedness & shortness of breath then we should be okay. Neither of us fancy getting AMS, acute mountain sickness (headaches, nausea, fatigue, dizziness), a condition brought on by going too high above what your body has sufficiently acclimatised for. To prevent this we’ll be going through the whole acclimatisation process, letting the body adjust over time to the decreased availability of oxygen at high altitudes, in Lhasa in the coming days. Hopefully this will set us up nicely for our upcoming trip on The Friendship Highway from Lhasa to Kathmandu in Nepal when we’ll be on real high, hitting altitudes in excess of 5,000 metres (16,400 ft).

· The breakfast of champions
OK, so maybe we’re not looking after ourselves all that well. Our breakfast this morning was a half a bottle of Pepsi and a cup of coffee.

· Yak attack
Speaking of food. Pat says he wants to eat yak. Maybe it’s the oxygen deprivation (I hear it can affect your reasoning) but yes, he told me wants to eat yak, those large long-haired, often domesticated wild ox of Tibet. We’ve seen a few yak from the train, grazing on the northern Tibetan Plateau, and I have to say they don’t look particularly appetising. Cold yes, appetising no. I doubt we’ll have any problems finding Yak on the menu in Lhasa. Remember, the Chinese eat anything with wings, except aeroplanes, and anything with legs, except tables.

· The novelty has worn off
A couple of hours ago, mid-morning today & some 25 hours in, Pat proclaimed he had had enough of the train. He said he had cabin fever and that his ass was sore from sitting and laying down all the time. Oh, and he wanted a shower. I told him to hang in there.