The 36-hour train journey I’ve just completed from Hohhot in Inner Mongolia, China, to Ulan Bator in Mongolia proper was a bit special. It turned out to be my first time spending 2 consecutive nights on a train and it took me through a part of the world I had always wanted to see and had unsuccessfully attempted to get to a few years back. I understand in the coming weeks, when I’m heading across Russia en route to Europe, that I’ll (probably) be spending longer periods on trains, but the Hohhot to Ulan Bator train trip was special. It will always be. 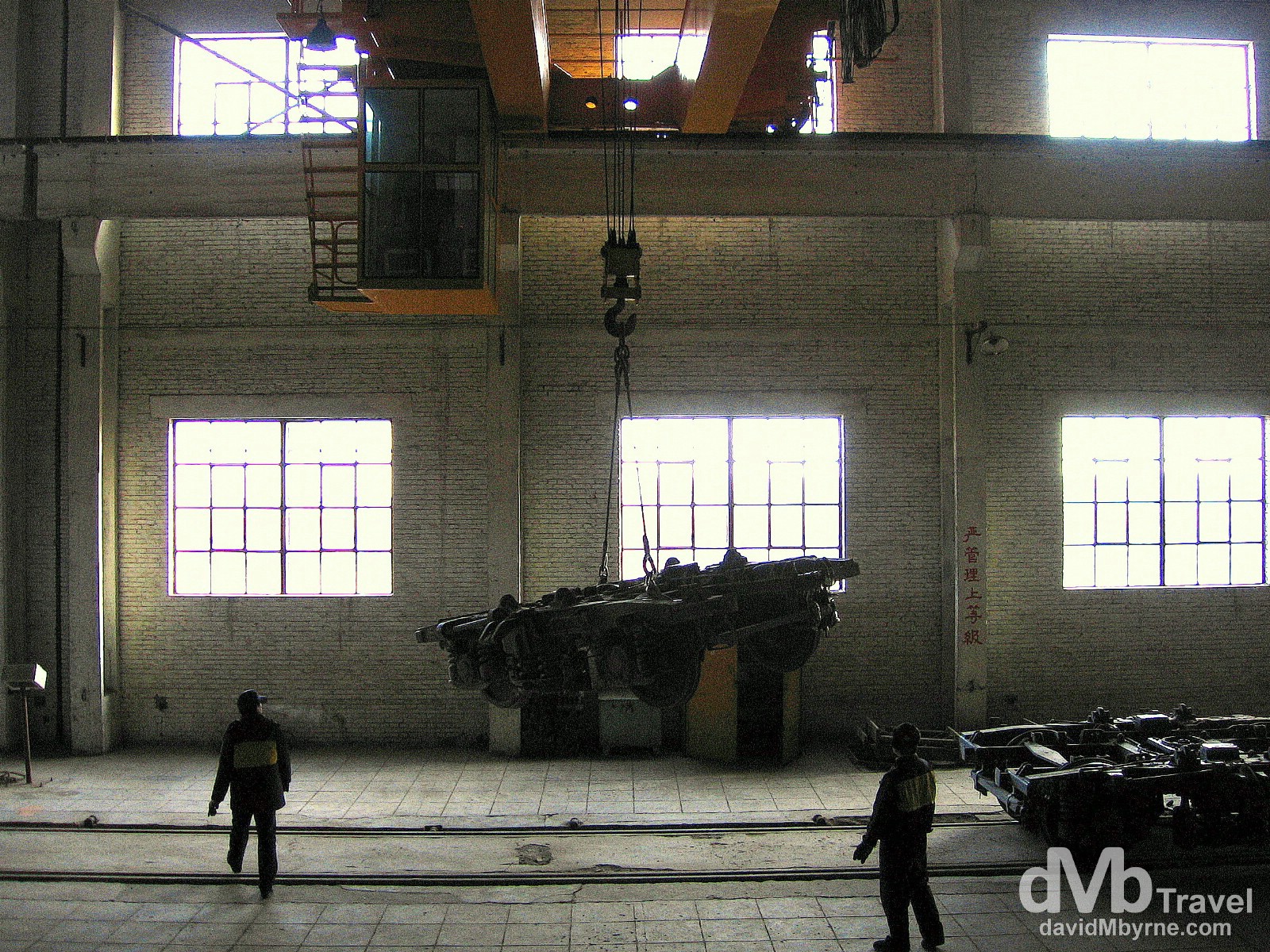 I was awoken yesterday morning to the sound of banging. Upon inspection I discovered I was in a huge shed having the wheels of the train, or bogies, changed. The Chinese & Mongolians (& Russians) use different railway gauges and thus the bogies need to be changed on all trains passing between the two countries. The whole process took about 2 hours. This is a shot from the carriage window (one is not allowed to leave the train carriage while the bogies are being changed) of a bogie being moved into place by the huge cranes in the shed in Erlian ( 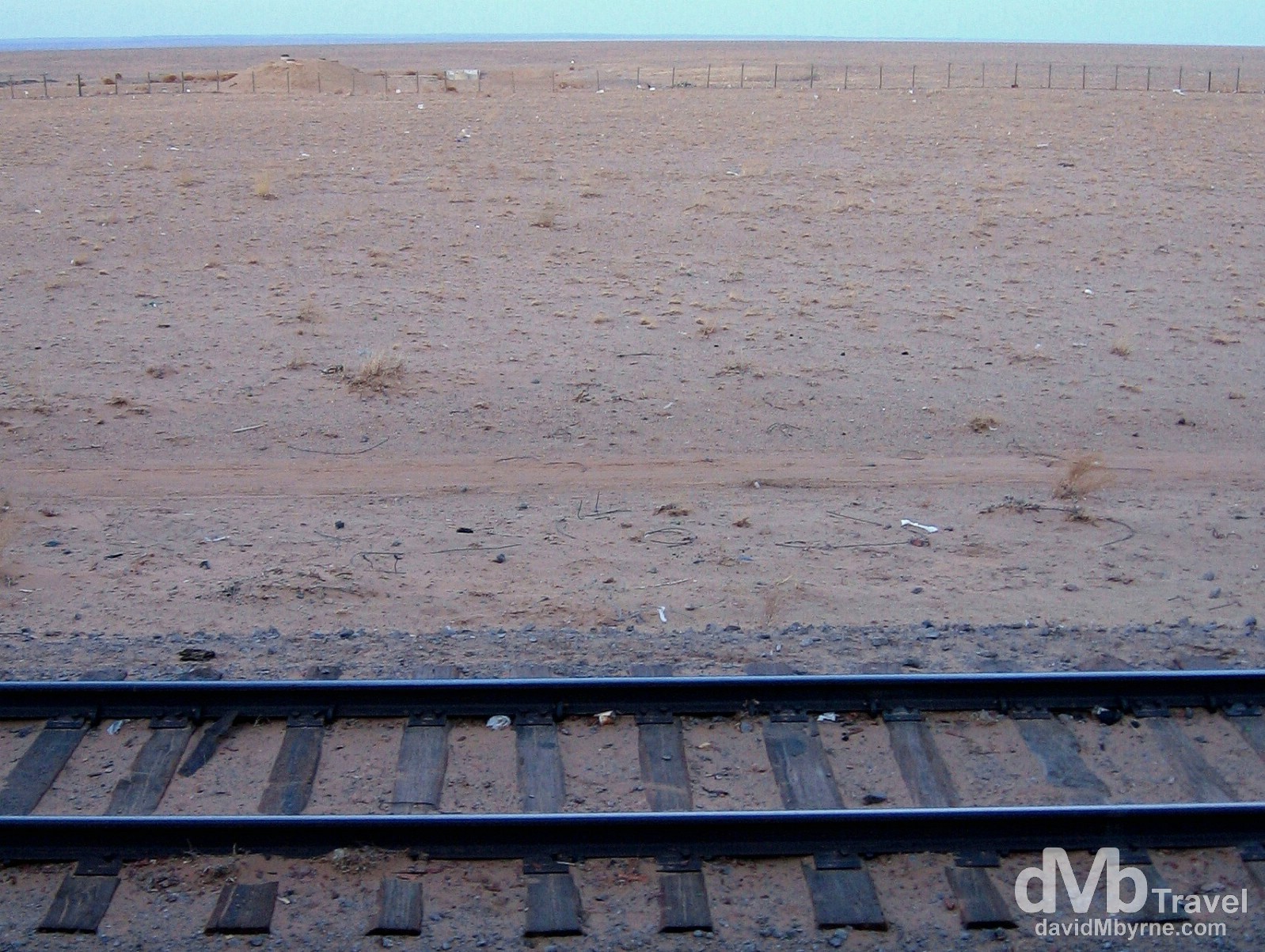 Having had our bogies changed we rolled the short distance from the shed to the train station in Erlian on the Chinese side of the China/Mongolia border. There the train sat for most of the day yesterday. With no explaination as to why we were just sitting there, or for how long we would be doing so, the day dragged on a bit. We eventually moved albeit very, very slowly, later that afternoon when the train rolled the short distance across the boarder to the Mongolia border town of Zamyn-Uud. This is a picture taken from our compartment of the nothingness at the China/Mongolia boarder as Mongolian immigration officials did their stuff with all us passengers on the train – document & customs checks etc. As this is an international border, guards manned the tracks outside the train preventing anyone for getting on or off the train during this time. At the China/Mongolia boarder crossing, Zamyn-Uud, southern Mongolia. February 14, 2006 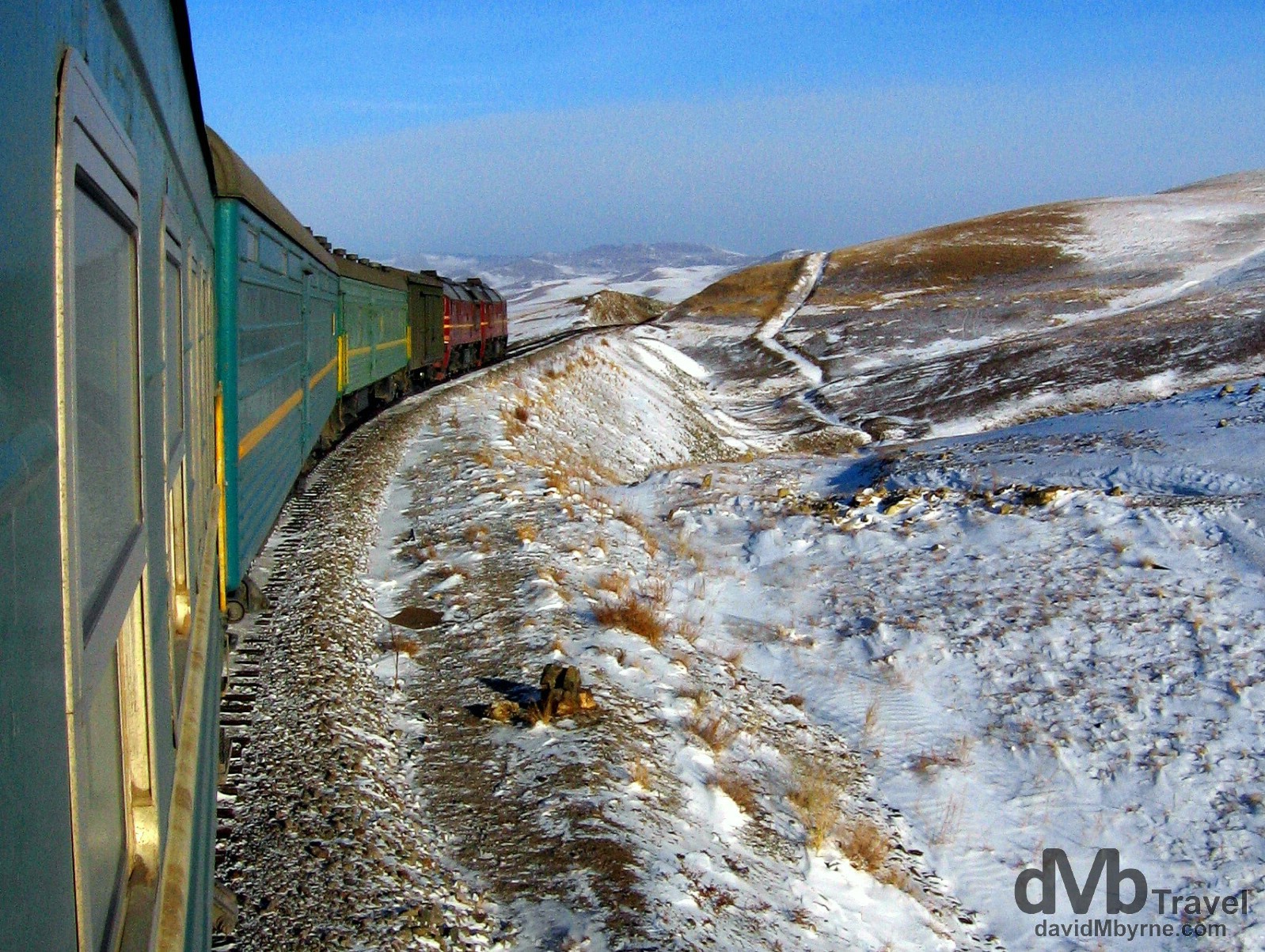 A picture captured from the train plying Mongolia’s only train line, the 1750 kilometre north-south line, part of the Trans-Mongolian Railway connecting China with Russia. The southern third of Mongolia is dominated by the Gobi Desert which extends into China. Only the very southern part of the desert is true desert – the boarder town of Zamyn-Uud, where we stopped off last night, has a real problems with sand build-ups & it was a real strange feeling to be fighting the freezing cold temperatures and to be walking on sand, something I associate with beaches and warmth. The rest of the Gobi is desert grassland that supports scattered herds of sheep, goats and camels. Much of the rest of Mongolia (52%) is also grassland, used for grazing and home to Mongolia’s famed takhi horses, which Chinggis Khaan used so successfully in his wars of conquest. This Mongolian countryside is a boy scout’s dream. The emptiness of a land with no fences, and no privately owned land, is amazing. Looking out of the train the nothingness of the countryside seemed to go on forever. Hour after hour passed without seeing anything but a small ger settlements on the barren grasslands. I had read about the grasslands of Mongolia numerous times before and I was anxious to see them as we passed through the countryside. I got up early today in an attempt to photograph the landscape we were passing through. This picture was captured towards the end of the 36-hour trip as we were approaching Ulan Bator, my present location – the southern Gobi was surprisingly absent of snow. Mongolia. February 15, 2006.

Countryside as seen from the Trans-Mongolian train approaching the Mongolian capital of Ulan Bator. February 15, 2006.