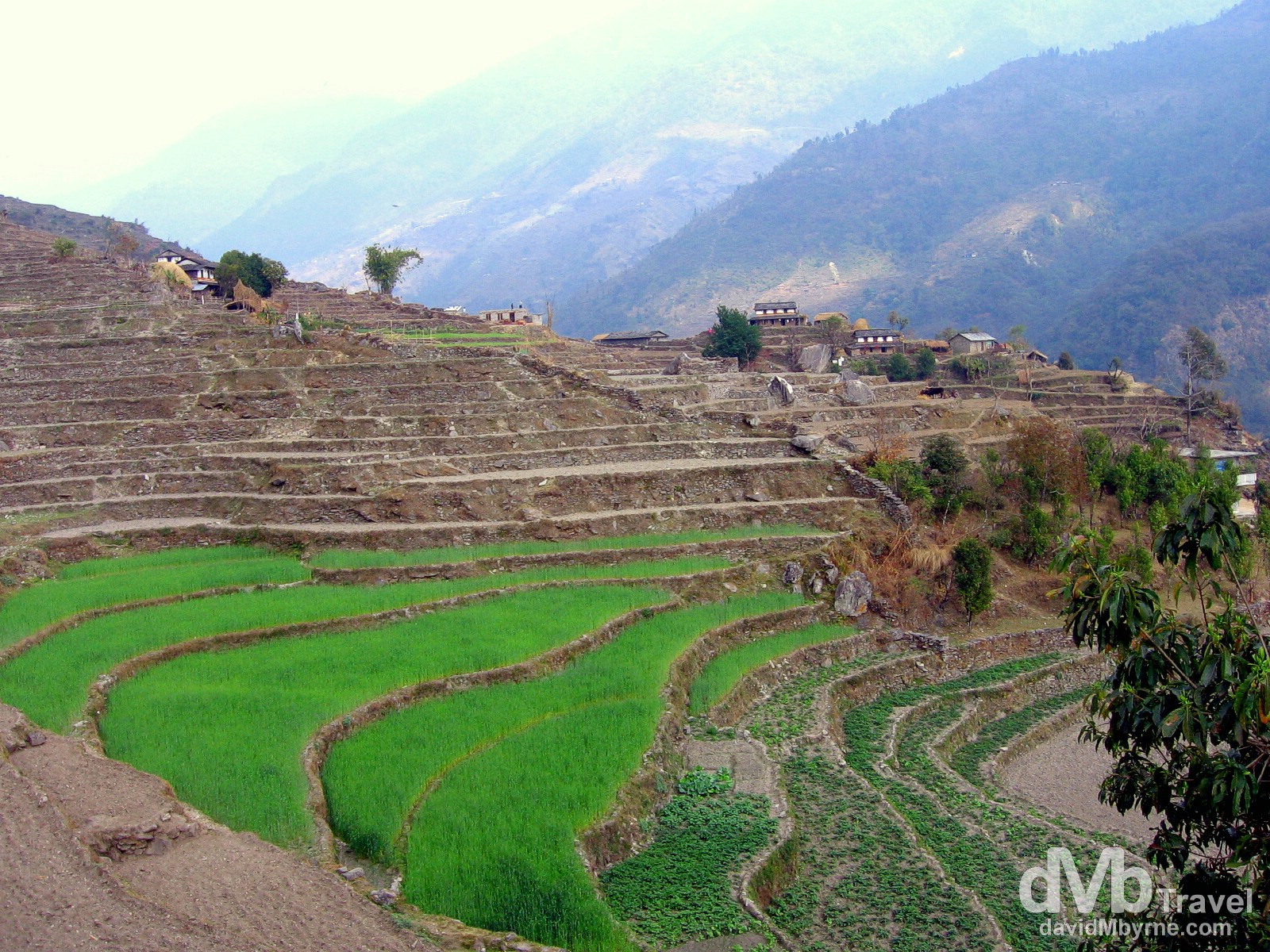 We were told by every agent in Pokhara that we sauntered into that the Poon Hill Trek in the Annapurna Conservation Area of western Nepal was typically a 5 to 7 day affair. We were skeptical, more than skeptical, & when querying this we were told that it could be done, at a push, in 4 days but only if we were “quick.”

“Quick. How about very quick?” we asked.

We’ve decided to try to do the supposed 5 to 7 day trek (4 days at a push) in 3 days. According to our guide – a very likable, as are all Nepalese, guy named Dill – it is possible to complete the trek in 3 days but to do so will require of us a big effort, upwards of 6-8 hours of strenuous, uphill walking a day.

“No problem Dill. You lead the way.”

So there you have it. Our trek will basically see us walking in a triangular pattern with two days of uphill walking followed by a day of downhill walking back to our starting position. So says Dill. Easy peasy.

The Off
We were on the road from Pokhara by 10 a.m. this morning, having picked up the permit that lets us walk for however many days in the national park that is the Annapurna Conservation Area. We didn’t have too much luck getting comfortable on the local bus that navigated the winding roads, slowly taking us to our drop-off point in a place called Brethanti.

A bus convoy on the roads of western Nepal en route from Pokhara to Brethanti, the drop-off point for the Poon Hill Trek. Western Nepal. March 11th, 2008

The bus, like all buses in Nepal, was not in a hurry. Far from it. The 35 kilometre trip took 90 bumpy, noisy minutes, meaning it was about noon today when we actually started walking. Trekking actually. Trekking in Nepal no less. Oh yeah.

The Trek
It’s hard to make walking sound exciting so I’m not going to spend time here and now trying. All I’ll say is that we walked pretty much non-stop for 3 hours. The first 90 minutes were spent walking along a rocky valley floor and the second 90 minutes were spent walking up… and up… and up… and up, out of the same valley floor, until we reached our first overnight location of Ghandruk, a small village that clings to the steep sides of the valley and one that looks like at any moment it’s finally going to lose its fight with gravity & slide down the valley walls. To get here we had to pass through some quaint little villages. We also passed quite a few locals on the trail, trading “Namaste” (hello in Nepalese) greetings each and every time. But few, if any, of the locals were out for a relaxing stroll in the fresh mountain air enjoying, as we were, the smell of the rhododendrons (they are in bloom this time of year). 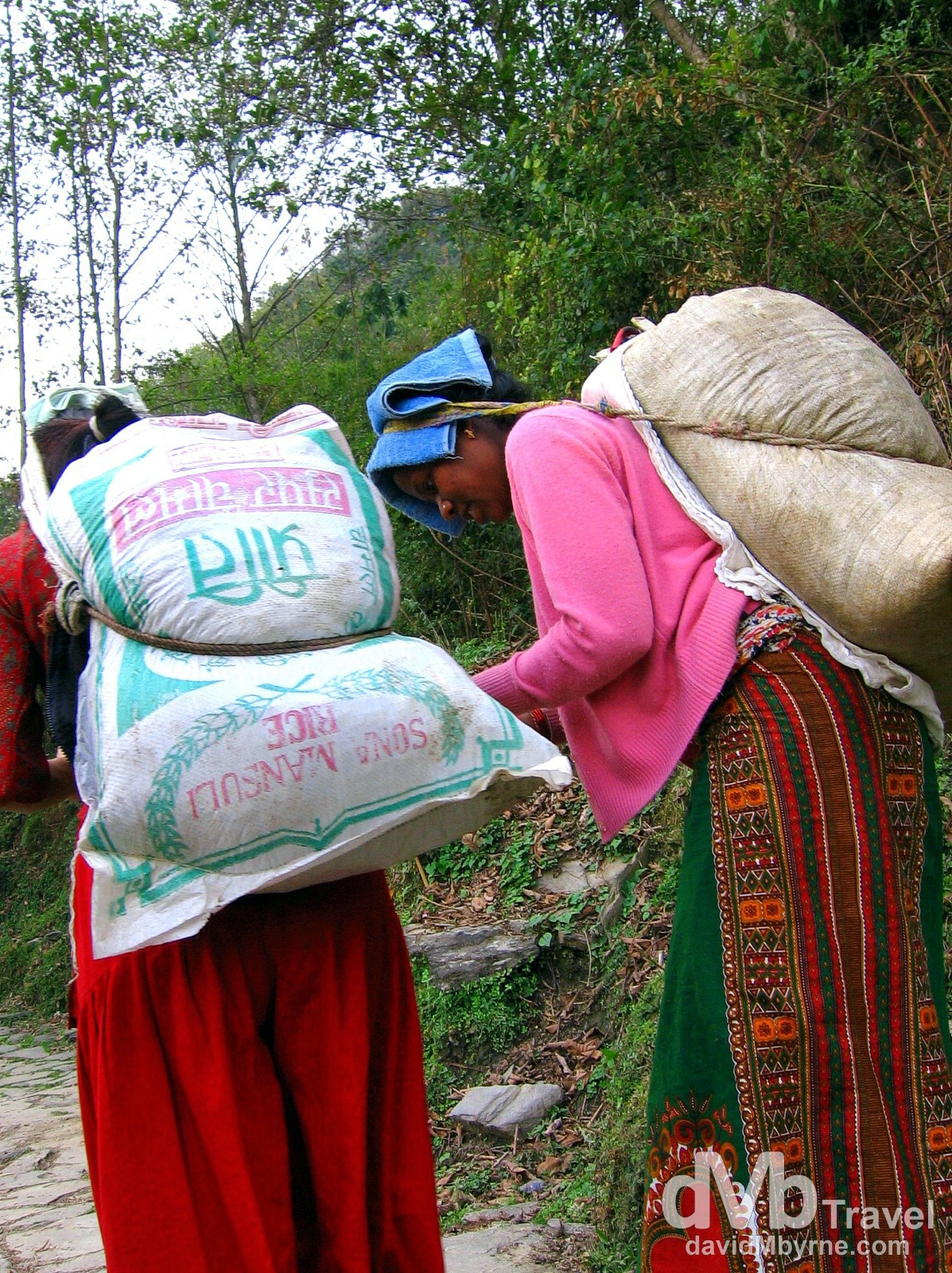 It’s a tough life on the trail from Birethanti to Ghandruk. These friendly locals stopped us & asked us for sweets. It was a rather bizarre request but what was even more bizarre was the fact that it was a request we could fulfil – we actually had sweets with us, glucose ones we had purchased a while ago in Tibet and sort of forgot to eat, but interestingly packed for this trek. It was like they knew. Bizarre indeed. On the trail from Birethanti to Ghandruk, Annapurna Conservation Area, western Nepal. March 10th, 2008

As we walked we were awarded great views of far-off rice terraces, but no mountain views. Not yet. An ever-present haze was to blame for that. As we were walking along the valley floor Dill proclaimed that the mountains were “there,” pointing to the whiteness way in the distance.

“We’ll take your word for it Dill. We know you wouldn’t lie to us.”

Day 1 Observations
· Poor Dill
It took us 3 hours walking in total to get to Ghandruk, Dill having estimated earlier in the day that it would take us 5-6 (that was before he saw how fast we both like to walk).

“You see Dill, didn’t we say we were machines.”

He’ll never admit as much of course but we think he was a little perturbed by the pace we set, & even more perturbed that we maintained that pace for the whole 3 hours. Poor guy. And he calls himself Nepalese. 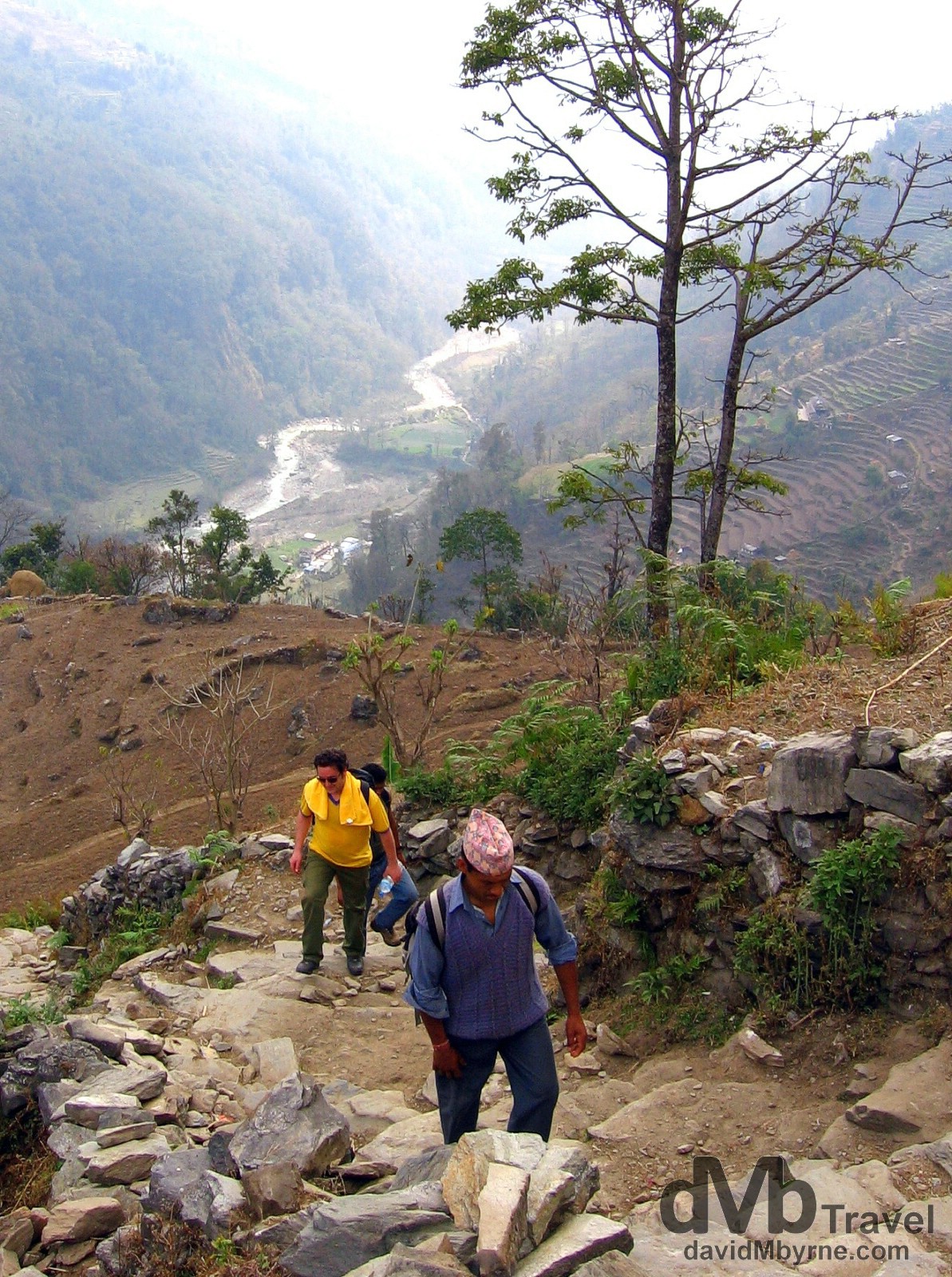 Pat (yellow t-shirt) on the march up, up, up, with Dill right behind. The valley we spent the first 90 minutes walking along today can be seen in the background, as can the haze obscuring our view of the mountains at the other end of the valley. On the trail from Birethanti to Ghandruk, Annapurna Conservation Area, western Nepal. March 10th, 2008

· Nothing To Do
Maybe you shouldn’t walk as fast as we do. There’s no rush because there isn’t really much to do in these overnight villages once you actually arrive. One of the disadvantages of getting here early (we arrived in Ghandruk at 3pm) was that unless you bring some entertainment with you (we were packing light for the trek and thus didn’t even bring a book with us), or are the sort of person who can sit still for hours doing absolutely nothing, then you’re gonna get bored fast. I for one got restless very soon after we arrived. Taking a stroll around the village didn’t do much to appease my restlessness, nor did the fact that my MP3 player was almost out of battery power (a consequence of Nepal’s erratic power grid). Pat had no such problems. He could quite easily sit still for hours on end, happy with his thoughts. He started telling me that the fact that I get restless so easily makes me a good traveller. I couldn’t quite figure out what he meant. He explained his reasoning but to be honest it was lost on me.

· Solar Powered
Ghandruk, like all villages in these parts, is electrically-challenged so we had a solar powered shower today not long after we arrived. Warm? Not really. Cold? Not really. It was somewhere in between. Solar powered or not, it was great to get our sweaty clothes off our backs and put on a fresh set so we could sit on the guesthouse veranda sipping tea & taking in the views of the nothingness before us. 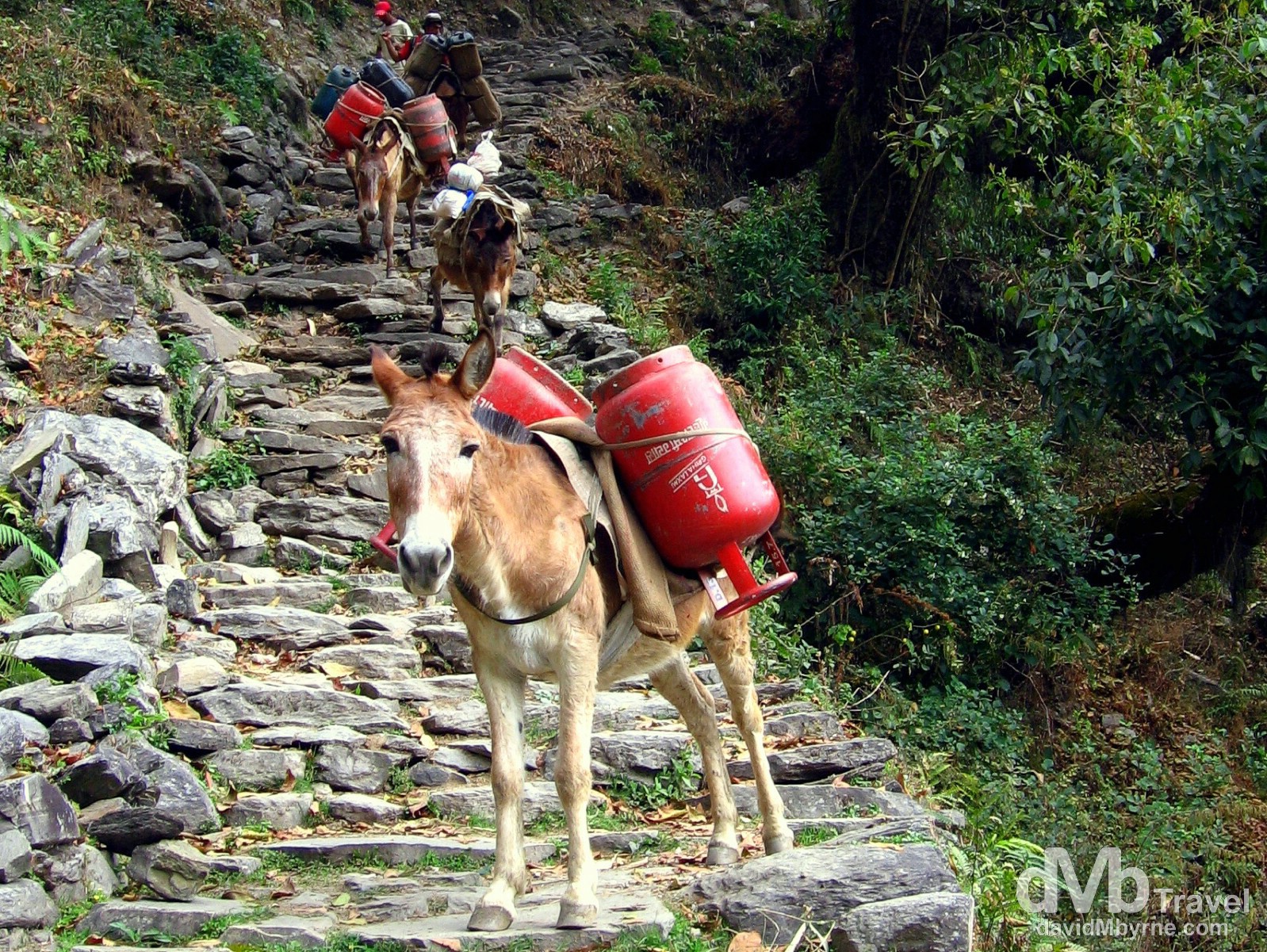 It wasn’t just humans we shared the trek trail with today. A common sight are donkey convoys transporting goods (everything from gas bottles, beer, water, cement and food) up the mountains. On the trail from Birethanti to Ghandruk, Annapurna Conservation Area, western Nepal. March 10th, 2008

· Once You’ve Popped
We treated ourselves to a tube of Pringles today. The green ones – sour cream & onion. Yummy. A little piece of heaven, very close to it.

· Meat & 2 Veg. But no Beer
We gorged on dinner tonight. The menu in the Trekkers Inn Guesthouse here in Ghandruk is a weird one.

“What comes with the roast chicken?” we asked the lady taking our order.

“These extra,” she informed us.

Pat had convinced me that we have to have a typical Irish meat-&-2-veg meal – it’ll be good for the energy levels he claimed. So based on the menu presented to us we ended up ordering chicken, mixed veg & potatoes, thinking they would all come on the same plate. They didn’t and we ended up with three separate meals. Each. The table wasn’t big enough for all the dishes. Dill almost collapsed at the sight of the dishes coming out of the kitchen, no doubt thinking we were abusing the fact that all meals and accommodation are included in the cost of the trek. By the way, we also ordered dessert. That was Pat’s idea too.

· St. Paddy’s Day in Varanasi
The following happened before I got restless. We were sitting in silence, lost in our respective thoughts, on the veranda of the guesthouse. We had just polished off a pot of tea, our feet were up & we were staring into the white nothingness, the nothingness obscuring our view of the mountains we’ve been assured are towering over us, not to mention the valley we were sitting in. It was then I realised the significance to today’s date.

“Here Lad, do you know what date it is today?” I asked.

“March 10th. That means Paddy’s Day is in a week”, now making sense to Pat who was sufficiently lost up until this point of the conversation.

“Oh yeah,” he exclaimed before asking where we were going to be for St. Paddy’s Day.

“All going to plan Varanasi, India, I reckon.”

“Varanasi. Umm. You’ve been there before, yeah? Do they have any Irish bars?”

“An Irish bar in Varanasi? I dunno Lad, but I doubt it very much. Sure we don’t need an Irish bar pass a Paddy’s Day, do we?”

“Suppose not, but it would be nice. Varanasi for St. Paddy’s Day. Who’d have guessed that.”