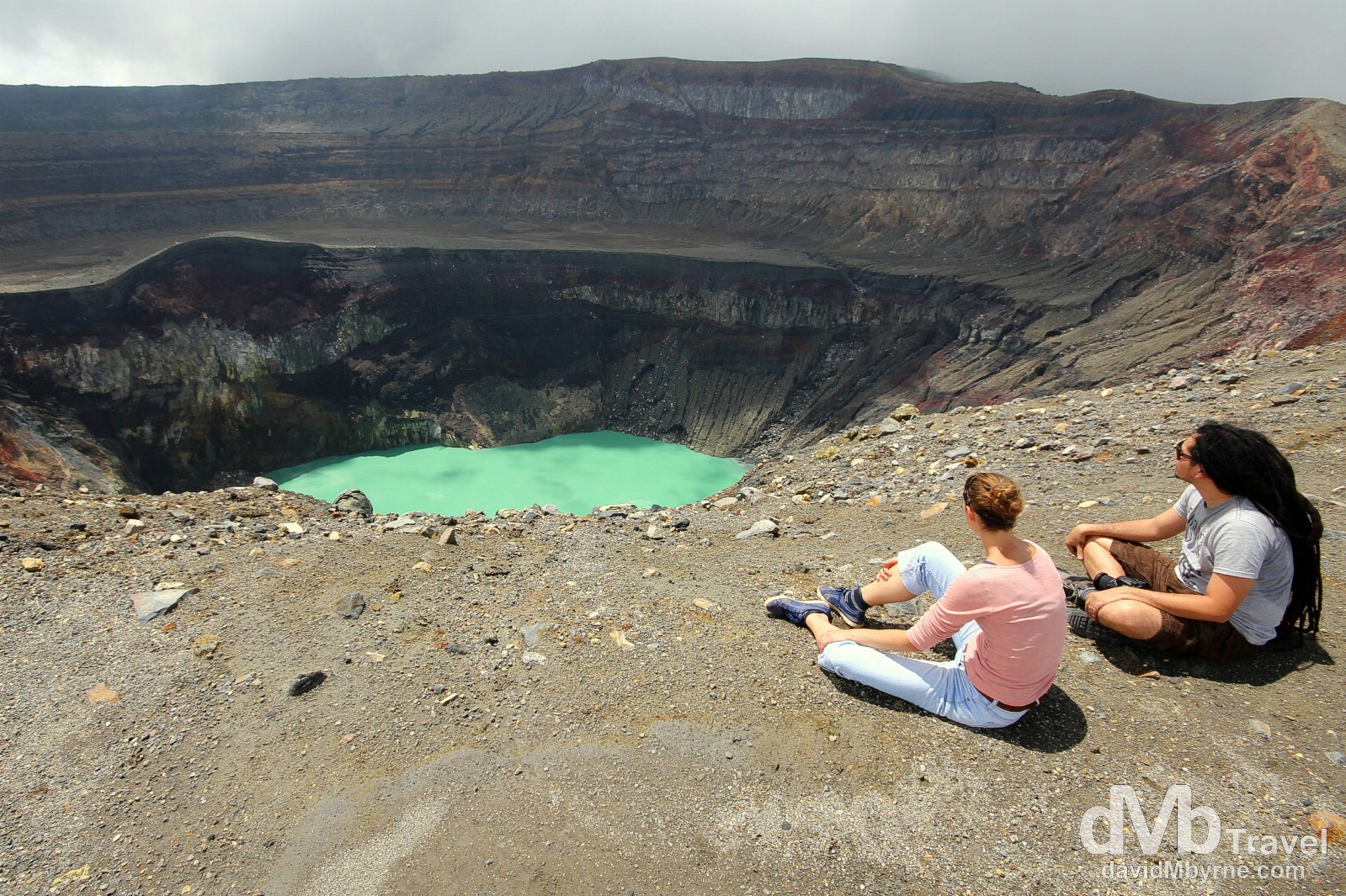 Now this is more like it. Having hardly laid my eyes on any of Guatemala’s 30 volcanoes, let alone scaled one, I was determined to take a run at the first volcano I saw here in El Salvador. So I did just that. All it took was an hour-&-a-bit on a bus from Santa Ana, followed by a 2-hour wait to see if the weather would allow an accent (it did), followed by a relatively easy 90-minute walk. All of that got me to the third highest point in El Salvador, the 2,365 metre summit of Santa Ana volcano in Parque Nacional Los Volcanes in western El Salvador, one of no less than 25 volcanoes in the country, an astonishing number for such a small country, Central America’s smallest.

Members of my climbing party overlooking the emerald-green crater lake at the 2,365 metre summit of the Santa Ana volcano, Parque Nacional Los Volcanes, Western El Salvador. The view up here was pretty special, although it was fleeting – the shone for approximately 20 minutes all day, the 10 minutes either side of taking this picture. For the rest of the time it was misty/overcast &/or torrential rain. I guess we got lucky. Santa Ana volcano, Parque Nacional Los Volcanes (

The park is a natural treasure housing three major volcanoes – Cerro Verde, Volcán Santa Ana and Volcán Izalco. Active Volcán Izalco is the youngest in the group. Its cone began forming in 1770 from a belching hole of sulfuric smoke and today stands 1910 metres high. Izalco erupted throughout the 20th century, spewing smoke, boulders and flames and earning its reputation as ‘the lighthouse of the Pacific.’ Today this bare, perfect cone stands devoid of life in an otherwise fertile land. And while it may not match Izalco’s stark drama, at 2,365 metres, 455 metres higher than Izalco, Volcán Santa Ana (also known as Ilamatepec) offers some nice views from its barren, windy summit.

The weather didn’t play ball on the accent (very misty) or the decent (I got royally soaked, like I’d never been before) but at least I was granted a few minutes of nice weather on the summit, where it counted. I scrambled some way across the 3 kilometre summit ridge to get this panorama shot looking back towards the rest of my climbing party, including the requisite guard/guide (small specks to the left), something I was later told was dangerous – seemingly a Santa Ana rumble in late 2005 caused a few landslides, including of the crater walls, and has left area where I’m standing to take this picture unstable. Whoops. Also, a Santa Ana eruption in October 2005 triggered landslides that killed two coffee pickers and forced the evacuation of thousands. Best not complain about the rain so. I could have had worse things to deal with. On the summit of the Santa Ana Volcano, Parque Nacional Los Volcanes, Western El Salvador. May 28th 2013 (iPod)