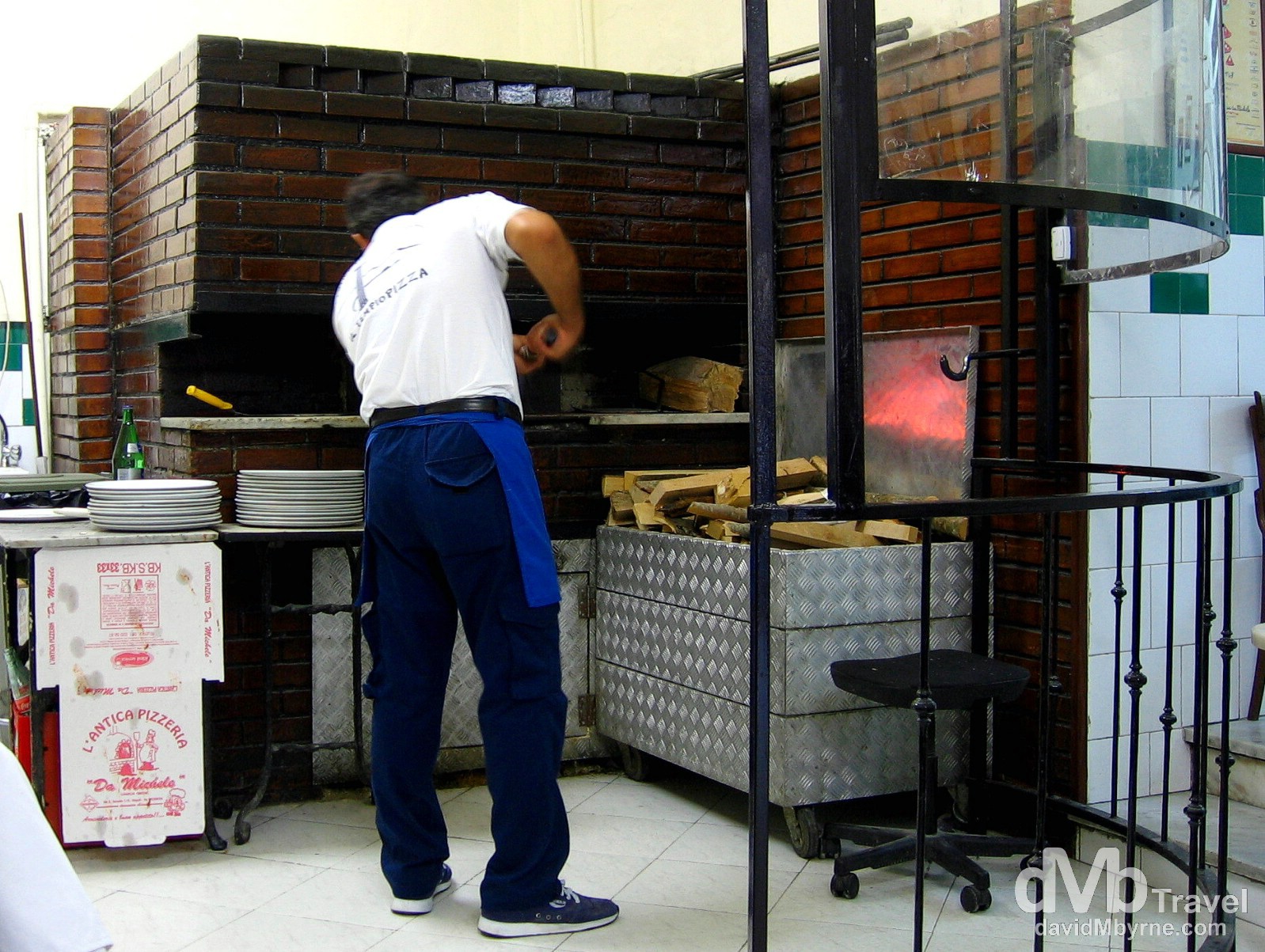 Before getting to Naples, the capital of the Italian south and my last stop in this my first jaunt through Italy, I had read that it was ‘different’, an utterly compelling city unlike anywhere else in the country. I had read that it was large, filthy, crime-ridden, and generally overbearing. Of course any guidebook that you reference will tell you that in all of these things lies the city’s ‘charm’ (mine did). I didn’t heed much into it. After all, it’s still Italy, right? Well, it may still be Italy in terms of geographical location, customs, language etc., but make no mistake, Naples is indeed ‘different’. The city has everything I’d experienced in (northern) Italy so far – traffic, noise, people, dirt, graffiti – just here everything was exaggerated exponentially. 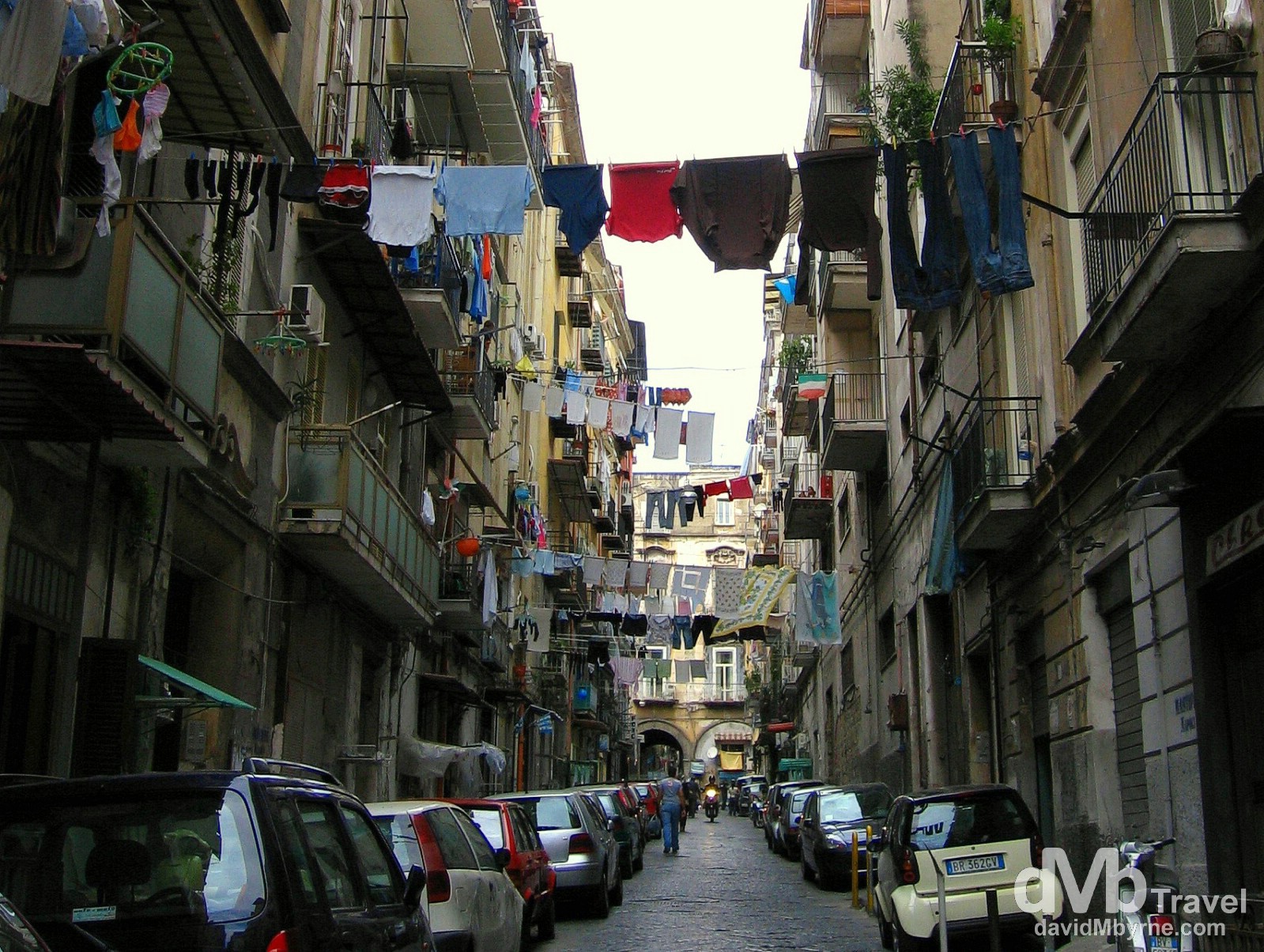 I arrived in the city off the train from Rome without any issues, the train trip being no different to my other pleasant Italian train experiences. But that’s where the familiarities ended. I wasn’t long on the streets of Naples when I realised that yes, things were indeed a bit different here. I kept a tighter grip on my bags on these streets. Areas surrounding most main train stations are usually places where you, as a newbie, need to be alert – it’s the same in most cities the world over. It’s probably the streets surrounding the city’s main train station, more so than anywhere else in the city, that put people off Naples (first impressions); the traffic is incessant, the buildings aren’t particularly distinguished & you’ll be surrounded by street hawkers (mostly African owing to the growing African community in the area) selling anything from postcards to laptop computers. But the thing that immediately struck me, apart from the initial realisation about how different Naples is, was that maybe, just maybe, I had escaped the Italian tourist trail. Yep, there no sign of a flag-bearing, mic-wearing tour guide on these Italian streets. Not yet anyway and doubtful I’ll be seeing one anytime soon. This is a picture, the only one I have from my time walking the streets of Naples, far from a photogenic city, of laundry out to dry in one of the narrow residential city lanes. Naples, Campania, Italy. September 6th, 2007.

The Two Ps || Pizza & Pompeii
But all that scaremongering aside, Naples has, at a minimum, two very good reasons for visiting, two reasons that easily allows you to overlook any differences the city may present – pizza and Pompeii. The former was born here – this is the birthplace of the worldwide phenomenon that is pizza and it supposedly tastes here like it does nowhere else on the planet, that is to say it tastes here like it should taste – & the latter, Pompeii, the ancient Roman city that was buried by the eruption of Mt. Vesuvius in AD 79, is a short 40-minute train trip away around The Bay of Naples. In light of those attractions I challenge anyone not to dive into the chaos that is Naples. Just be warned – it’s different.

Not long after arrival in Naples I found myself in Da Michele which, according to my guidebook, is the most determinedly traditional of all the Naples pizzerias.

In the heart of pizza country, Da Michele, which first opened in 1870, is the apogee of pizza. The creations served up in here are wholly different from the concoctions that have taken over the international fast-food market – you won’t find pepperoni, a pineapple or a kernel of sweet corn in here for love nor money. Da Michele offers just two varieties, allegedly the only two worth eating – marinara and margherita, the latter being the basic Neapolitan pizza with just tomato sauce, mozzarella cheese and olive oil, all topped with a leaf or two of basil. I couldn’t believe how simple, not to mention how quick the pizza making process in here is. A piece of dough is spread across the end of the implement used to feed the dough into the traditional wood-fire oven, sauce is spread over it and it’s dotted with mozzarella cheese pieces & olive oil before being placed in the oven. It’s then spun around for no more than 2 minutes before being removed. A basil leaf is then added & it’s served, piping hot and overflowing the plate. Just like that – from preparation to serving no more than 3 minutes. I’m not sure how something this simple tastes so good (the aforementioned book did mention something about an alchemical transformation) but who cares. Just tuck-in. Da Michele Pizzeria, Naples, Italy. September 4th, 2007.

· Wild East
I expected Naples to be different but I never expected it to feel lawless & seedy – it does both. Nor did I expect to encounter the sheer volumes of rubbish on the streets that I did encounter. I’d never seen anything like it, not even when travelling in so-called Third World countries. It’s as if the Naples city services have been on strike for the past 20 years. Either that or the bin collectors died out with the Romans. You’ll find bins on the streets alright, but you’ll find then, as is my experience, overflowing.

· Strays
There are stray dogs everywhere. It adds to the lawless, Wild West feel of the place, and also means you have to watch your step, not just for cracks in the path/sidewalk.

· Parking Professionals
Italians take parking to a new levels, somehow managing to fit a car into any free space be it by the side of the road or on the sidewalk. You notice that all over Italy but here in Naples you notice how it’s taken to new heights. Also, a lot of cars here in Naples have some sort of cosmetic defect, no doubt as a result of the reckless driving styles of Italians, again something that’s taken to a new height here in Naples. Broken headlight, dented bumper, wing or door? No problem – adds character. How about a missing headlight, bumper, wing or door? Again no problem, nothing a roll of masking tape and a sturdy piece of cardboard won’t fix.

· Real Pizza
It goes without saying that the pizza here is amazing. There’s always the chance that, in the home of pizza, one can expect too much and thus be disappointed with the reality. No, that won’t happen here.

· No Outdoor Cafés
This common sight all over northern Italy is totally absent here in Naples.

· Ghost Town
I was out on the streets at 9:30 p.m. this evening and everything was closed & there was no one around. That was a strange sight in such a big, bustling city.

· Cheap
Whatever Naples can be accused of being, expensive isn’t it. €4.50 for a Da Michele creation isn’t bad. In fact it’s great.