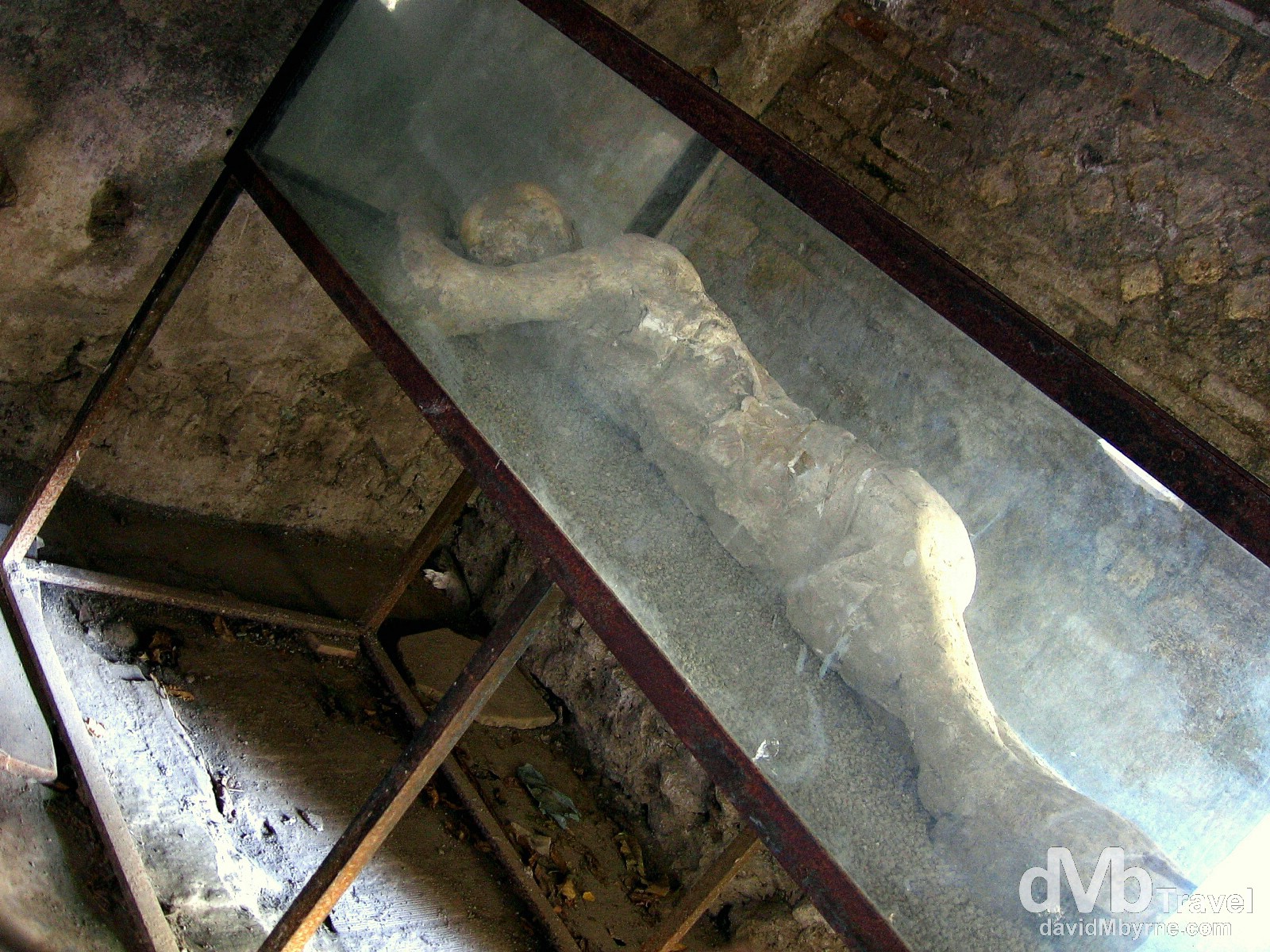 Pompeii, a 40-minute train ride around the Bay of Naples from Naples in southern Italy, was a wealthy Roman trading town that, on August 24th of the year 79 AD, was buried by volcanic ash and pumice from the eruption of the nearby volcano Mt. Vesuvius. The volcano had been spouting smoke and ash for several days before the fatal eruption and as a result most of the town had already been evacuated, meaning out of a total population of 20,000 it is thought that only 2,000 of its residents perished, the majority asphyxiated by the toxic fumes. While the aforementioned residents might not think so, the eruption of Mt Vesuvius was one of the best things that ever happened to Roman archaeology, freezing as it did the way of life in Pompeii as it stood at the time and leaving behind a series of ruins, subsequent excavations of which has revealed a way of life in precise and remarkable detail. Indeed, Pompeii has probably yielded more information about the ordinary life of Roman citizens during the imperial era than any other site, mainly its social conventions, class structure, domestic arrangements and its (very high) standard of living. 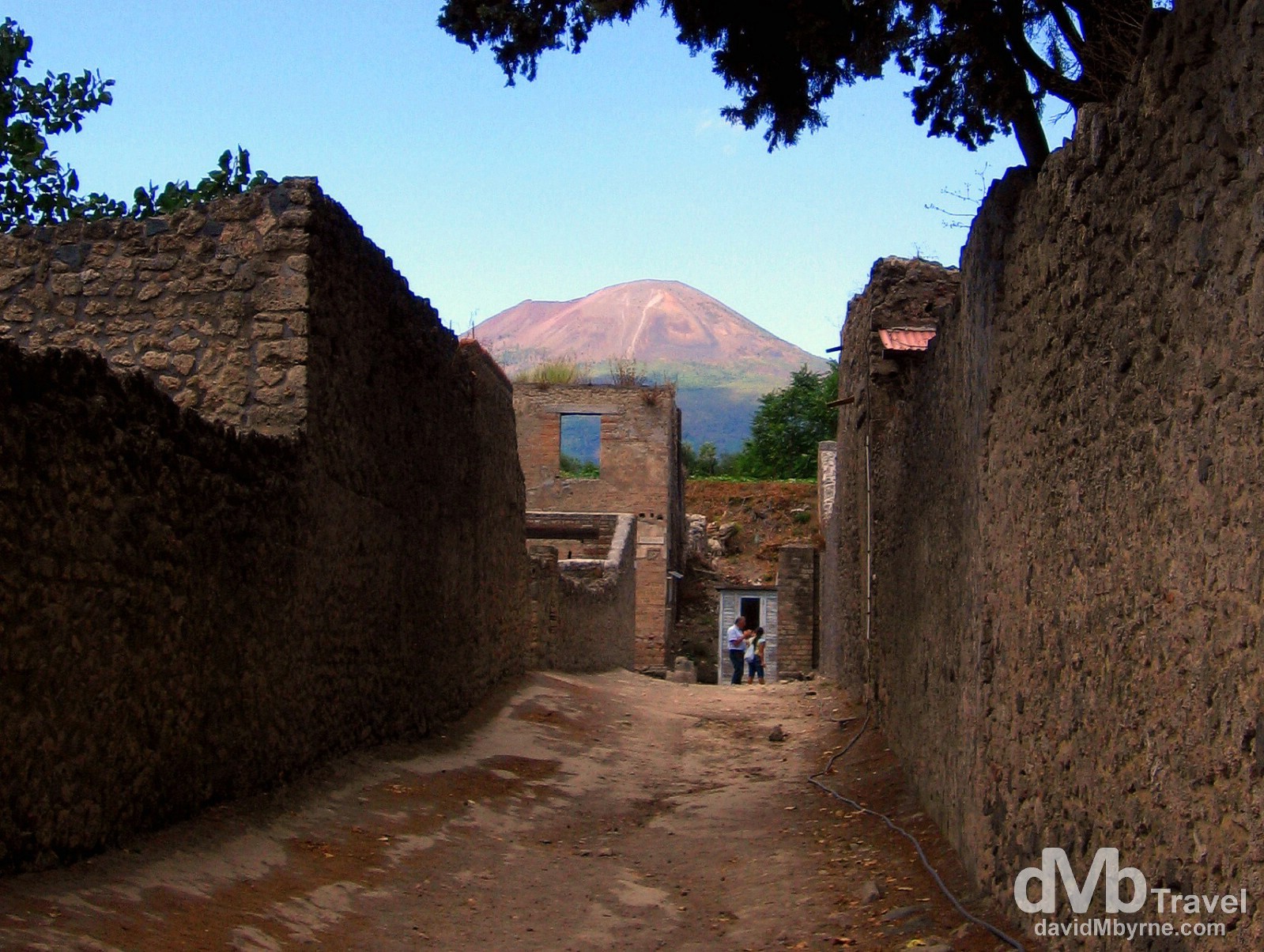 The culprit. Present-day Mt. Vesuvius as seen from the streets of Pompeii (

When Vesuvius erupted on 24 August AD 79, it engulfed the two flourishing Roman towns of Pompei and Herculaneum, as well as the many wealthy villas in the area. These have been progressively excavated and made accessible to the public since the mid-18th century. The vast expanse of the commercial town of Pompei contrasts with the smaller but better-preserved remains of the holiday resort of Herculaneum, while the superb wall paintings of the Villa Oplontis at Torre Annunziata give a vivid impression of the opulent lifestyle enjoyed by the wealthier citizens of the Early Roman Empire.

Amazingly the town of Pompeii was more or less forgotten until parts of it were discovered in 1600. Another 148 years passed until excavations of any sort began, continuing more or less without interruption until the present day. It’s not really surprising that in a site as big as Pompeii exciting discoveries are still being made today and excavations are presently trying to resolve whether or not the survivors attempted, vainly, to resettle Pompeii after the eruption. Granted UNESCO World Heritage listed status in 1997, today the Pompeii site is one of Italy’s premier tourist attractions. However, the site is large enough to absorb the thousands who descend on it daily, meaning it never feels too busy. 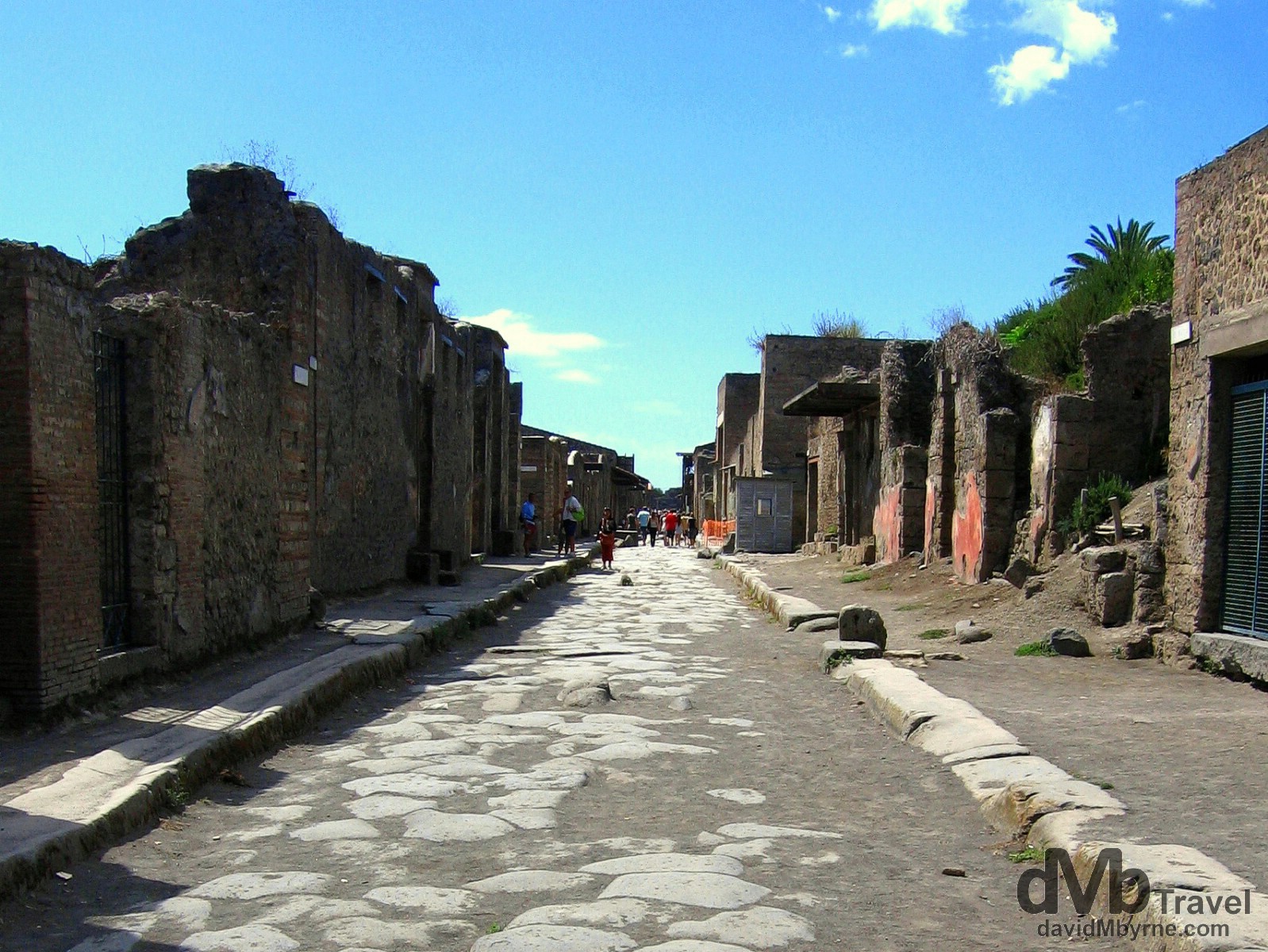 Via dell Abbondanza, one of the main streets in the Roman ruins of Pompeii. The vast majority of the buildings that lined the streets of Pompeii were residences of well-to-do Romans and thus one of the main attractions of tramping around the ruins today is seeing how those Romans lived all those years ago. You get a good appreciation for this thanks to the extraordinarily well preserved buildings. Most of the residences were plush, gracious villas that were very private with central courtyards and immaculate gardens, both adorned with water features. The residences rarely fronted the streets but had private entrance-ways that led back to the central courtyard looked over by the villa. Pompeii, Campania, Italy. September 5th, 2007. 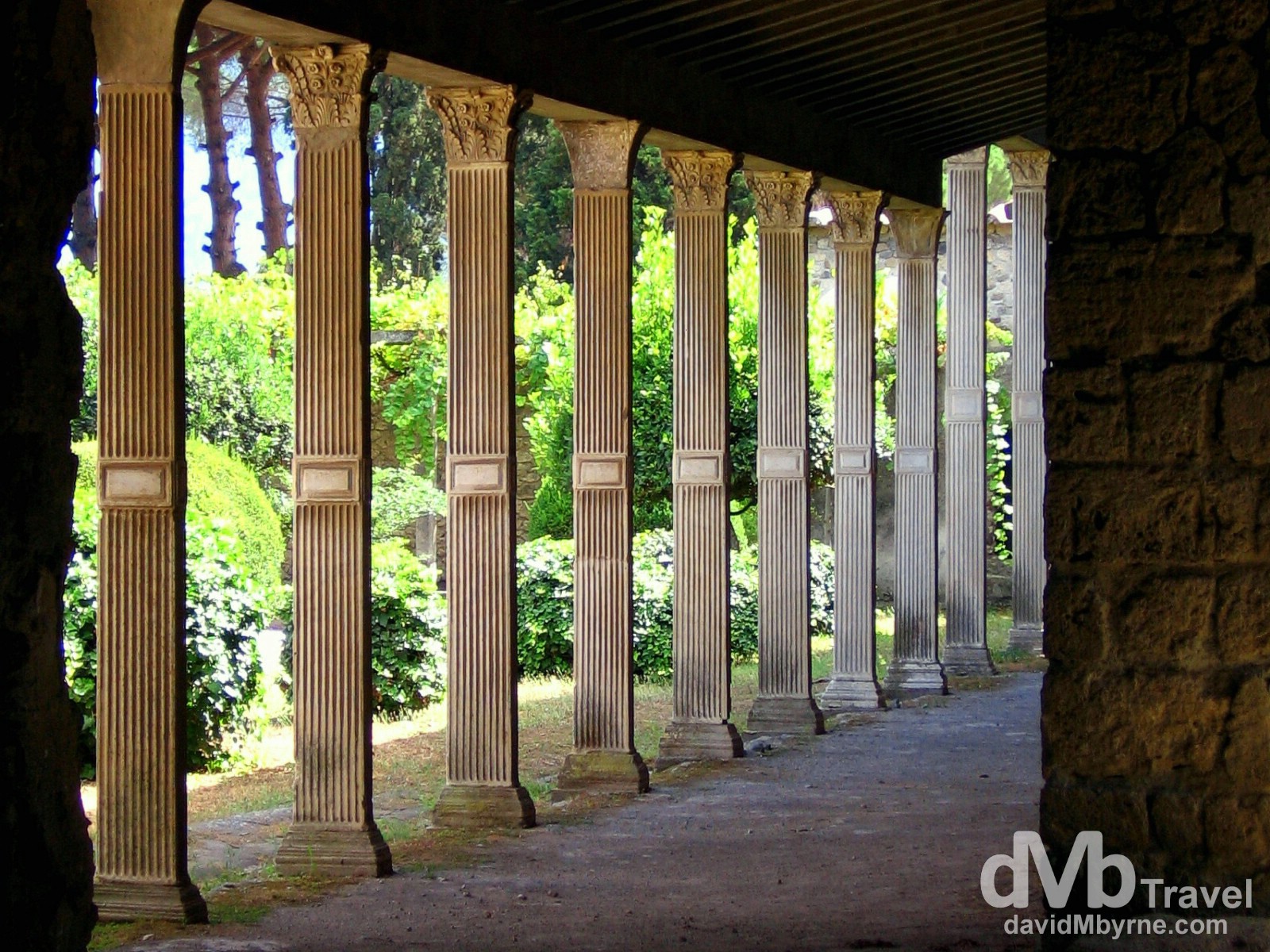 A section of the Palestra, a vast walled parade ground that was used by Pompeii’s youth for sport and exercise. It must have been in use when the eruption struck Pompeii since its southeast corner was found littered with the skeletons of young men trying to flee the disaster. When I visited Pompeii the Palestra was closed off but I did manage to capture this image of one side of the arena showing the almost 2,000-year-old, remarkably preserved pillars that enclose it. Pompeii, Campania, Italy. September 5th, 2007.

The full horror of the way of death for so many of Pompeii’s inhabitants is apparent in plaster casts made from the shapes their bodies left in the volcanic ash. These casts are dotted throughout the Pompeii site, some of them with faces tortured with agony or shielding themselves from the dust and ashes. Pompeii, Campania, Italy. September 5th, 2007.

A room when it is shut up, and the lamp put out.

– A Pompeii resident describing the effect of the eruption of Mt. Vesuvius 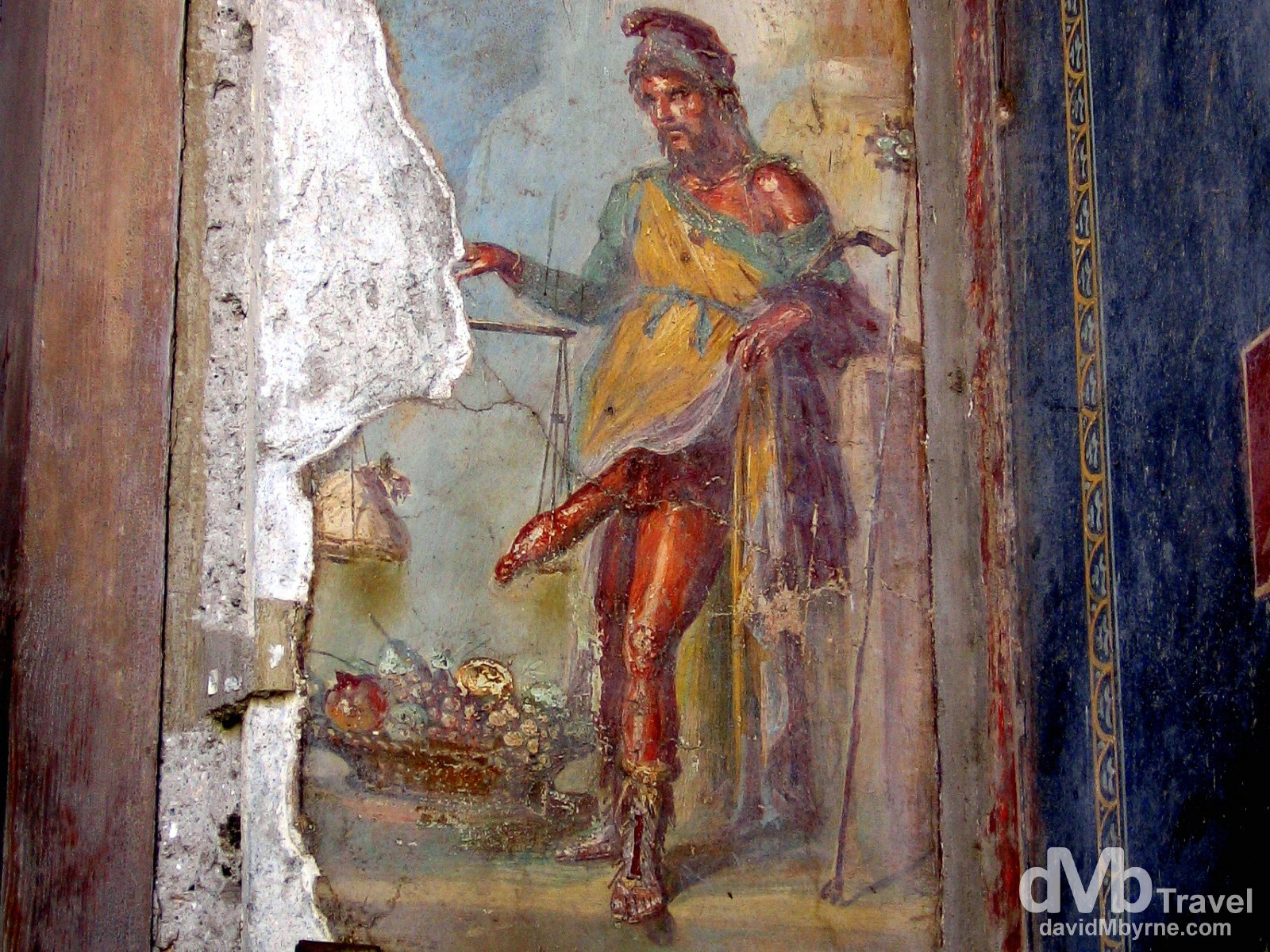 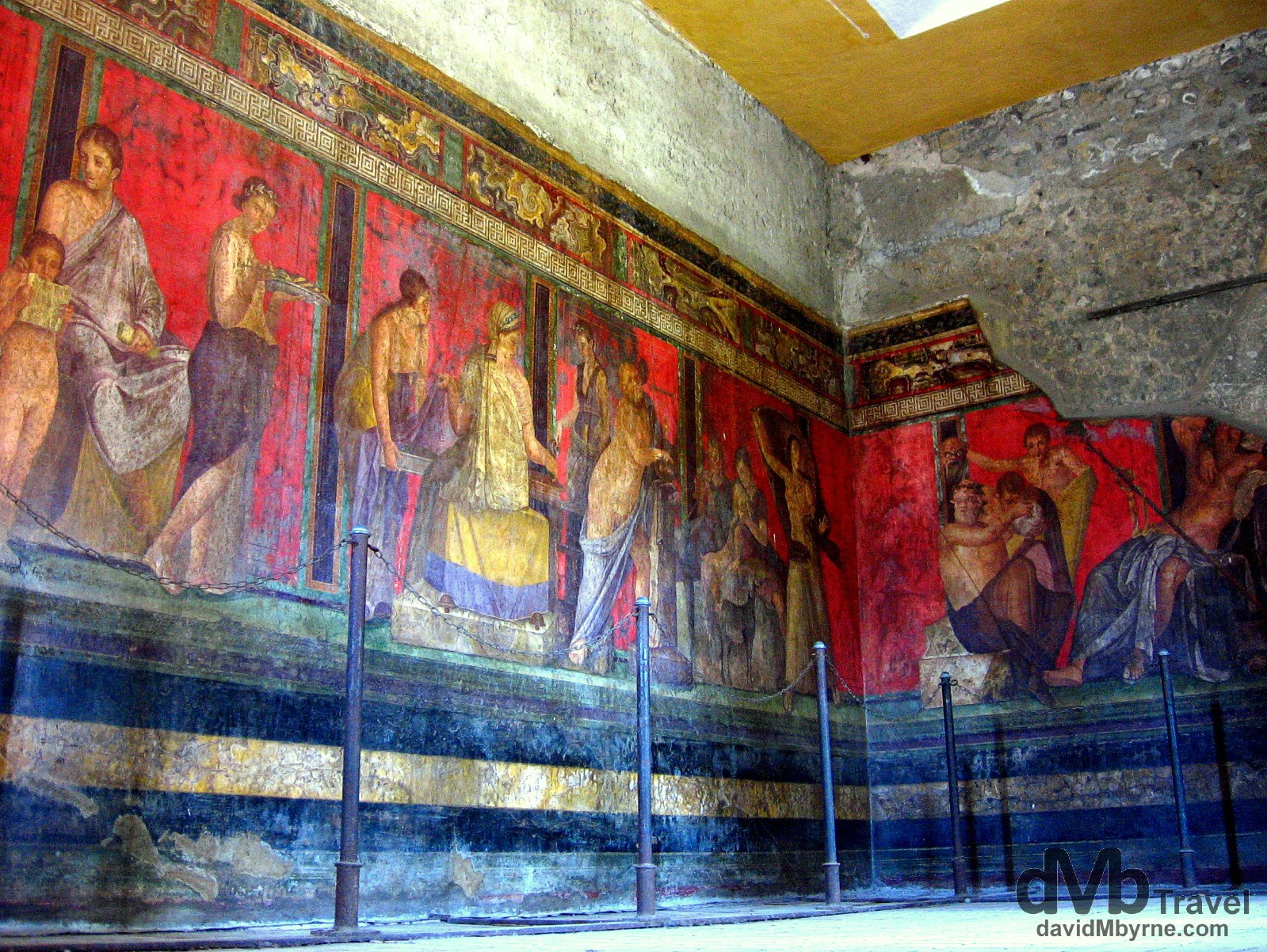 Pompeii’s Villa dei Misteri, the Villa of Mystery, is probably the best-preserved palatial house in Pompeii. It’s so called due to the series of paintings in one of its larger chambers, depictions of the initiation rites of a young woman into the Dionysiac Mysteries, an outlawed cult of the early imperial era. Not much is known about the cult itself but the paintings are marvelously preserved. They follow a narrative, an obvious one according to my guidebook, starting with the left-hand wall and continuing around the room with a series of freeze-frames showing sacrifice, flagellation, dancing and other rituals, all under the serene gaze of the mistress of the house. Villa dei Misteri, Pompeii, Campania, Italy. September 5th, 2007. 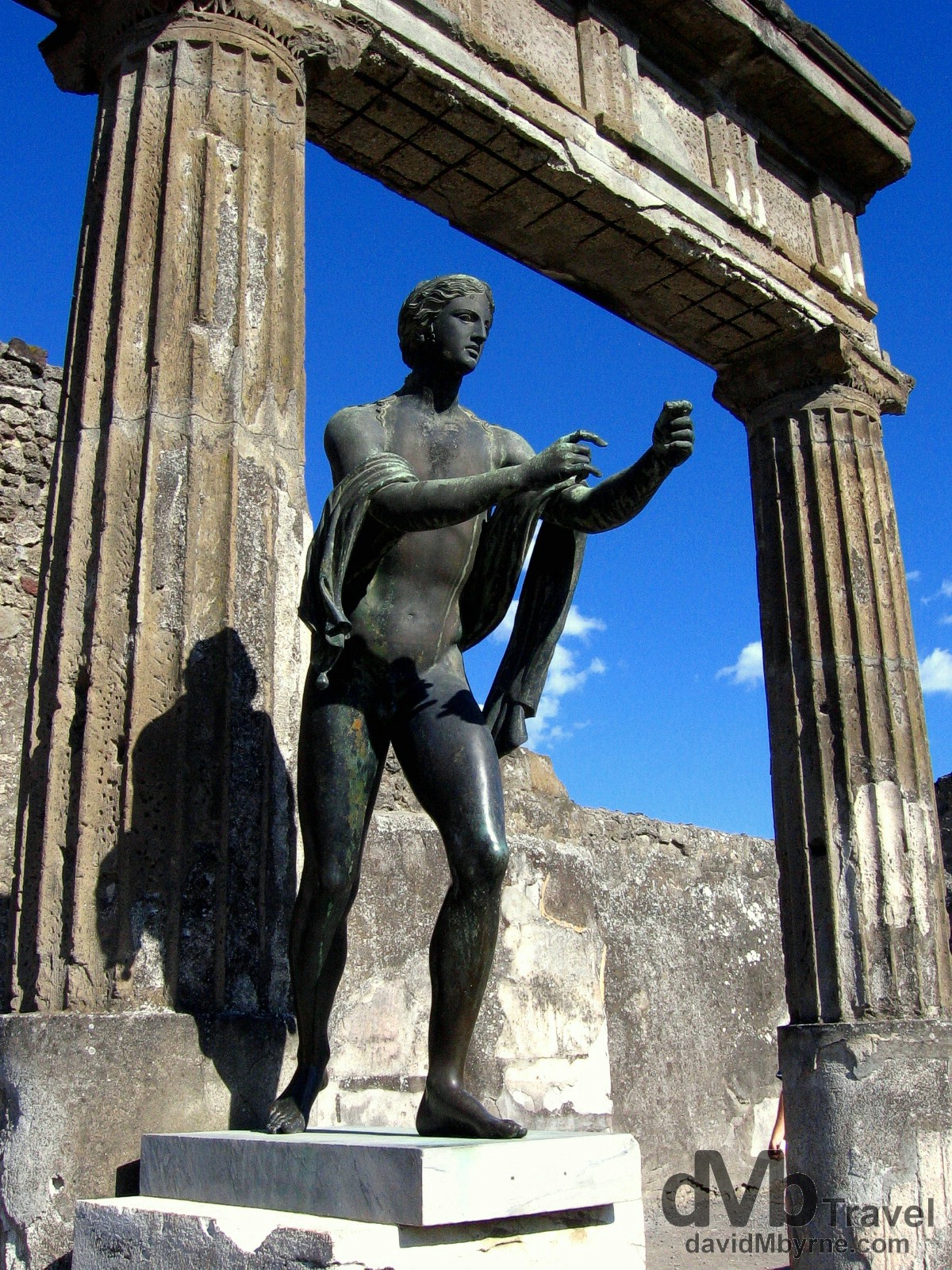 A statue of Apollo, the Greek God of light, in the Apollo Temple, or what’s left of the Apollo Temple, in Pompeii’s Forum, its main civic centre, a long, slim open space surrounded by the ruins of what would have been some of the town’s most important official buildings – a basilica, temples to Apollo & Jupiter and a market hall. This statue statue appears on 99% of Pompeii postcards meaning it’s possibly the symbol of Pompeii itself. Pompeii, Campania, Italy. September 5th, 2007. 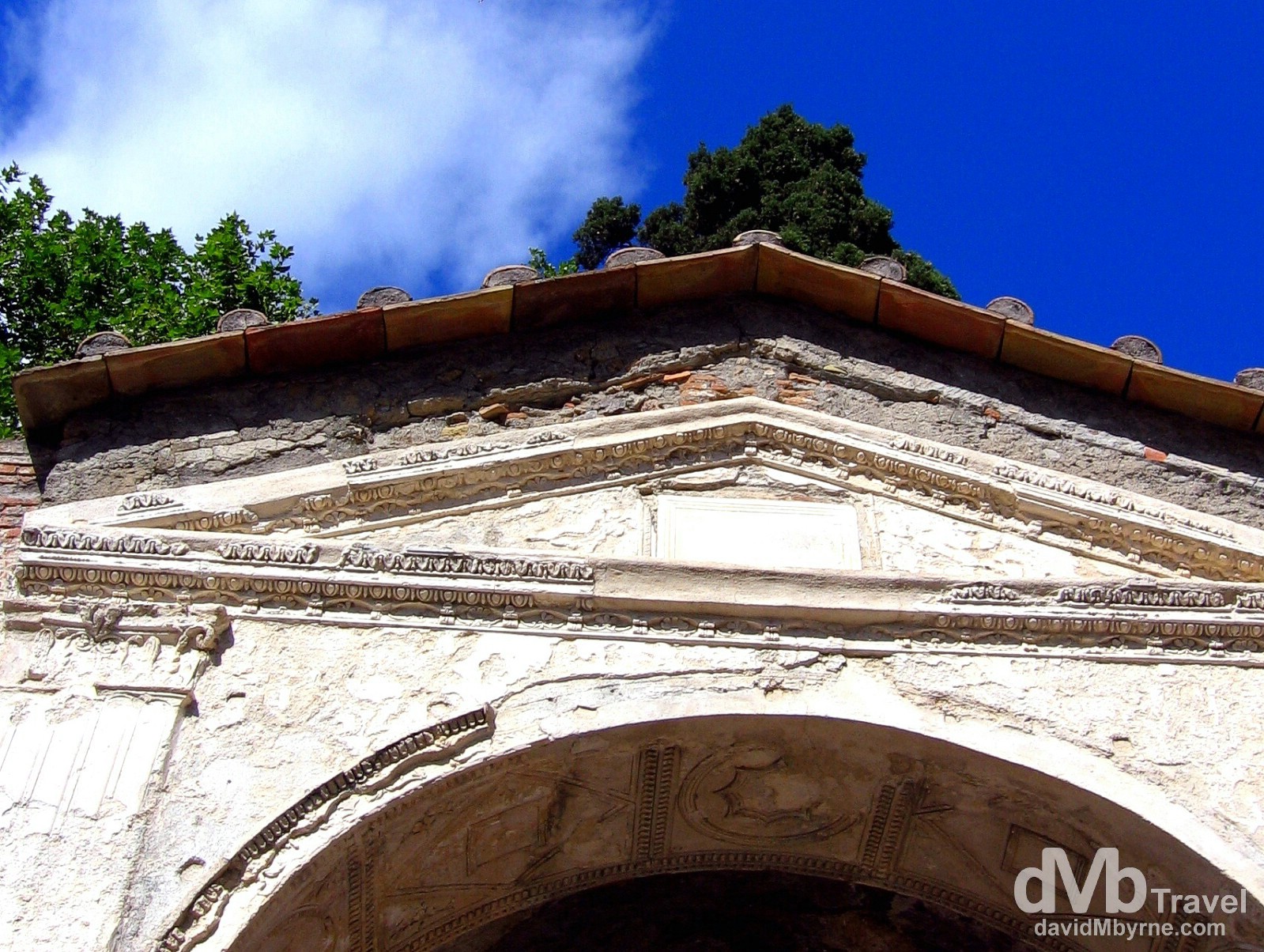