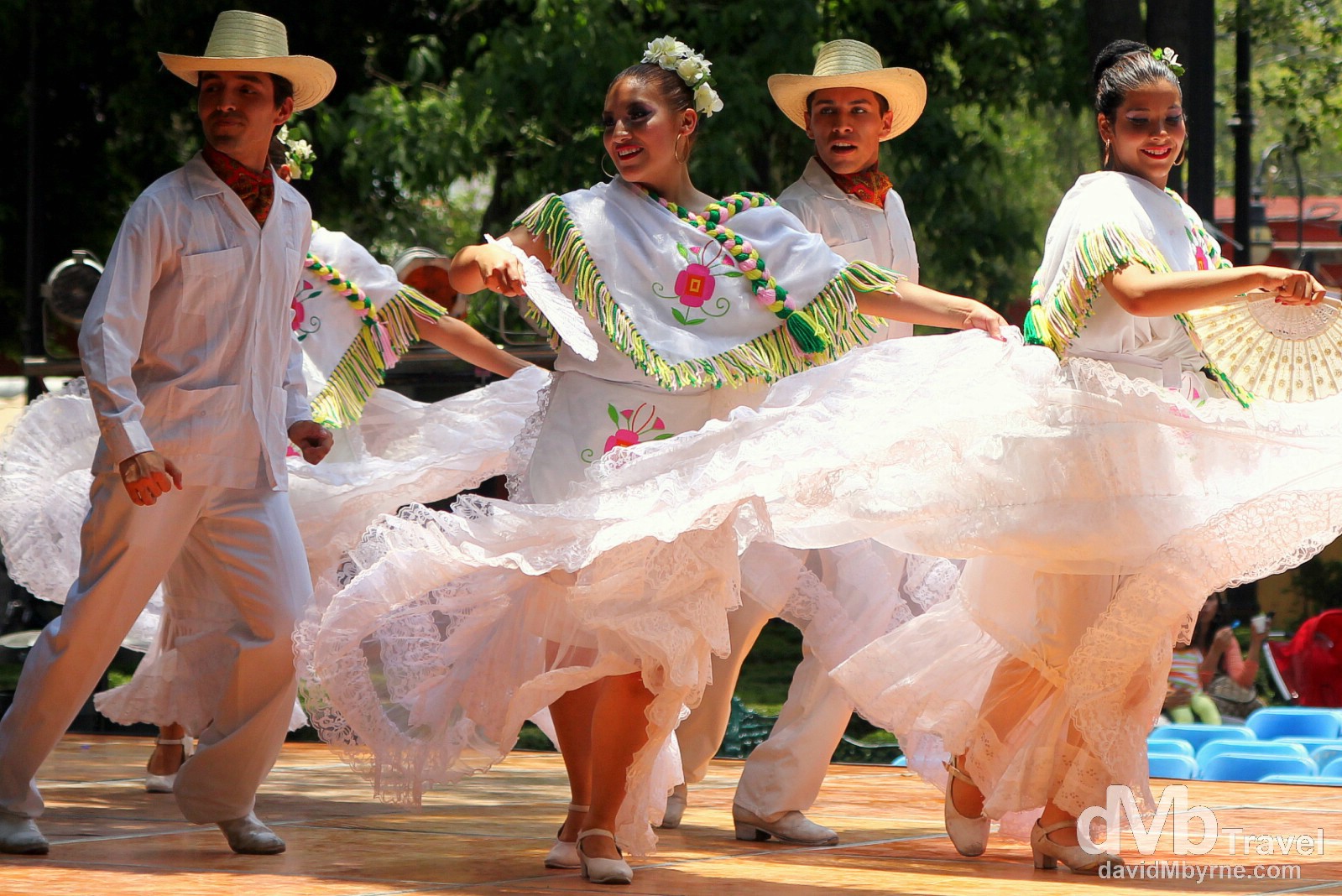 A gargantuan metropolis seething with people & full of history. That’s how I envisioned Mexico City before arriving here & after spending the last number of days taking a look around that’s exactly how it has turned out to be. I’m a city lover & it takes a lot for me to dislike massive and densely populated urban areas, of which Mexico City, with a population over 20 million, is the world’s tenth largest (or so claims that paragon of knowledge, Wikipedia). Therefore, I knew before even getting here from Guanajuato that I’d warm to the place. I just didn’t realise the extent to which I’d warm to it. In a word it is an awesome city. Yep, awesome. There’s so much to do and see here that for sights & attractions alone it can be really overwhelming for the fist time visitor. It quickly became apparent to me that one could spend weeks here doing all there is to do and seeing all there is to see. I didn’t have weeks. Initially I planned to spend three nights here, but by the time I get a flight to the Yucatan in the morning I’ll have ended up staying five. Even then I had to be selective & even then I only barely scratched the surface of the city and its innumerable suburbs. I kept busy most days and was exhausted by the end of them. I took a lot of pictures. A lot of pictures. I culled them. A lot. And I culled them again, ending up with 18, & a bit of video, from my time here, time I spent falling even deeper in love with Mexico.

The Centro Historico (The Historic Centre) of Mexico City is a UNESCO World Heritage listed area jam-packed with history, magnificent buildings, & people. There’s quite a lot to take in. Just don’t try do it all in the one day. 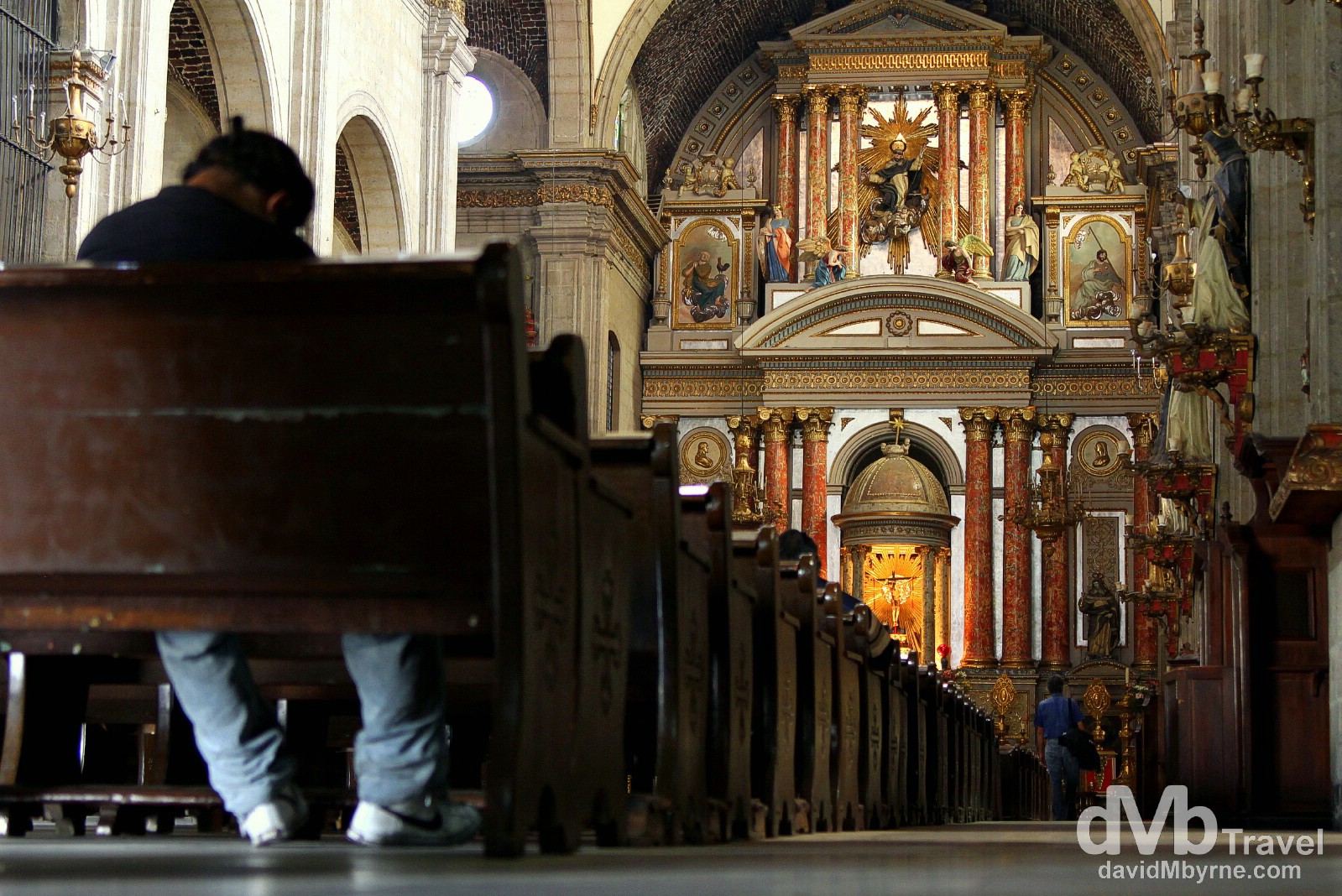 With the amount of churches I’ve visited since I arrived in Guadalajara 8 days ago, I’ve surely improved my lot for getting into heaven. All Mexican churches, or at least the dozens I’ve visited, are just like this one – old, have massive interiors and are visually very impressive. This picture was captured in the Iglesia de Santo Domingo (Santo Domingo Church) in the Centro Historico on my first full day in the city. Mexico City ( 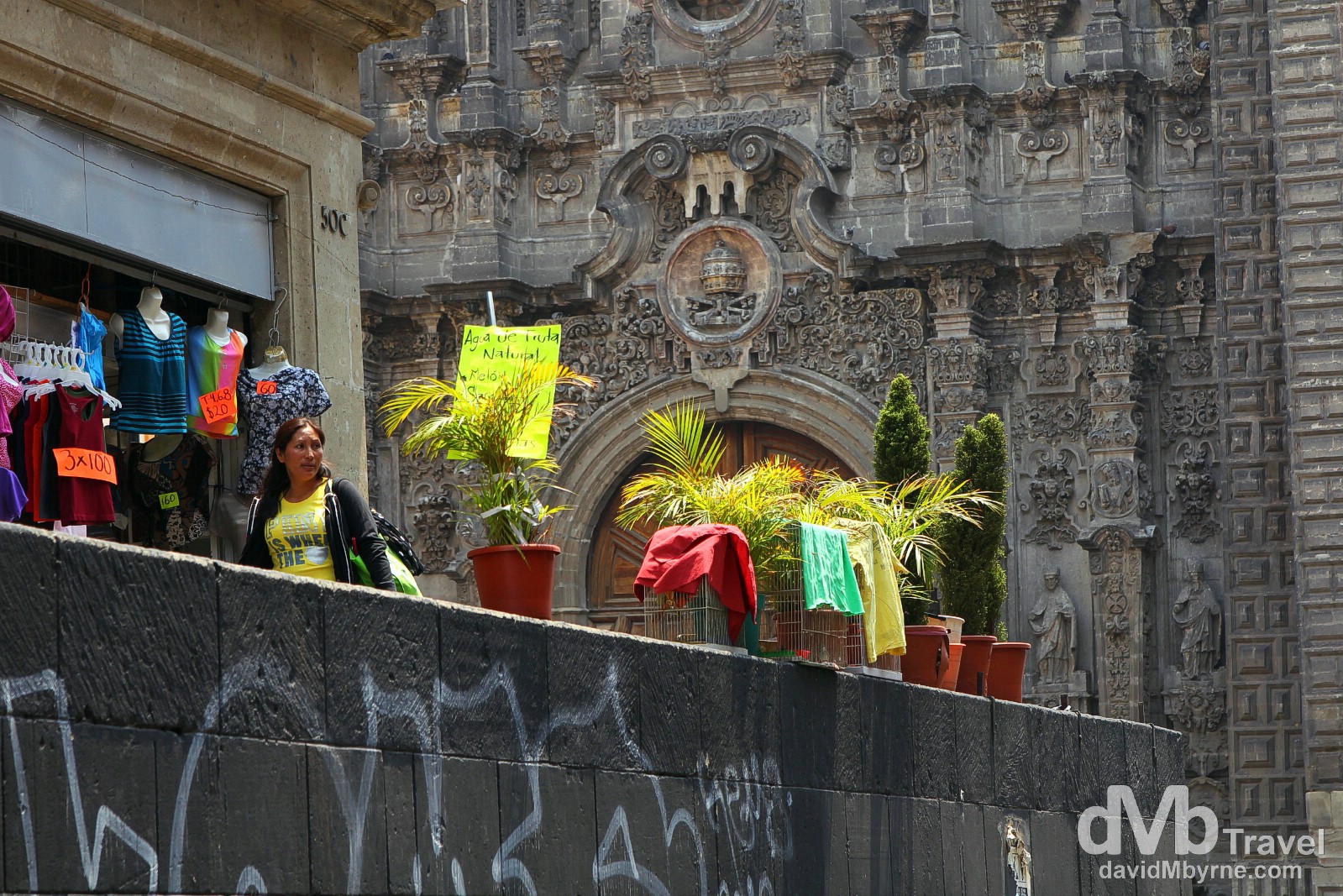 Maps of Mexico City might be a tad confusing. Just a heads up. 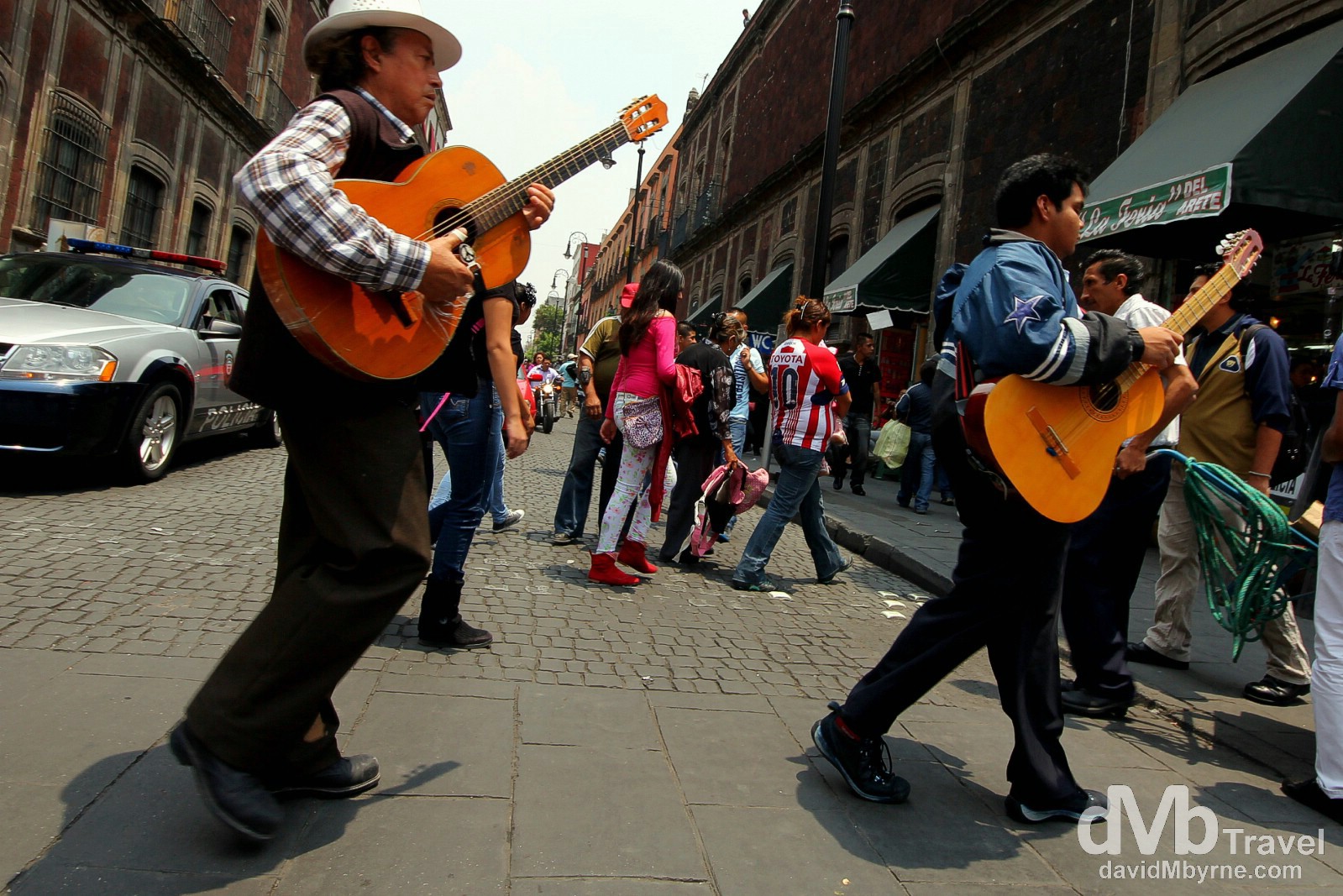 It seems like Mexico always moves to the rhythm of a beat. Music is an integral part of the Mexican way of things and it’s everywhere in the country – one the streets, on public transport & blaring from doorways & moving cars. There’s no escaping it (not that you’d want to). Moneda, Central Mexico City. April 26th 2013. 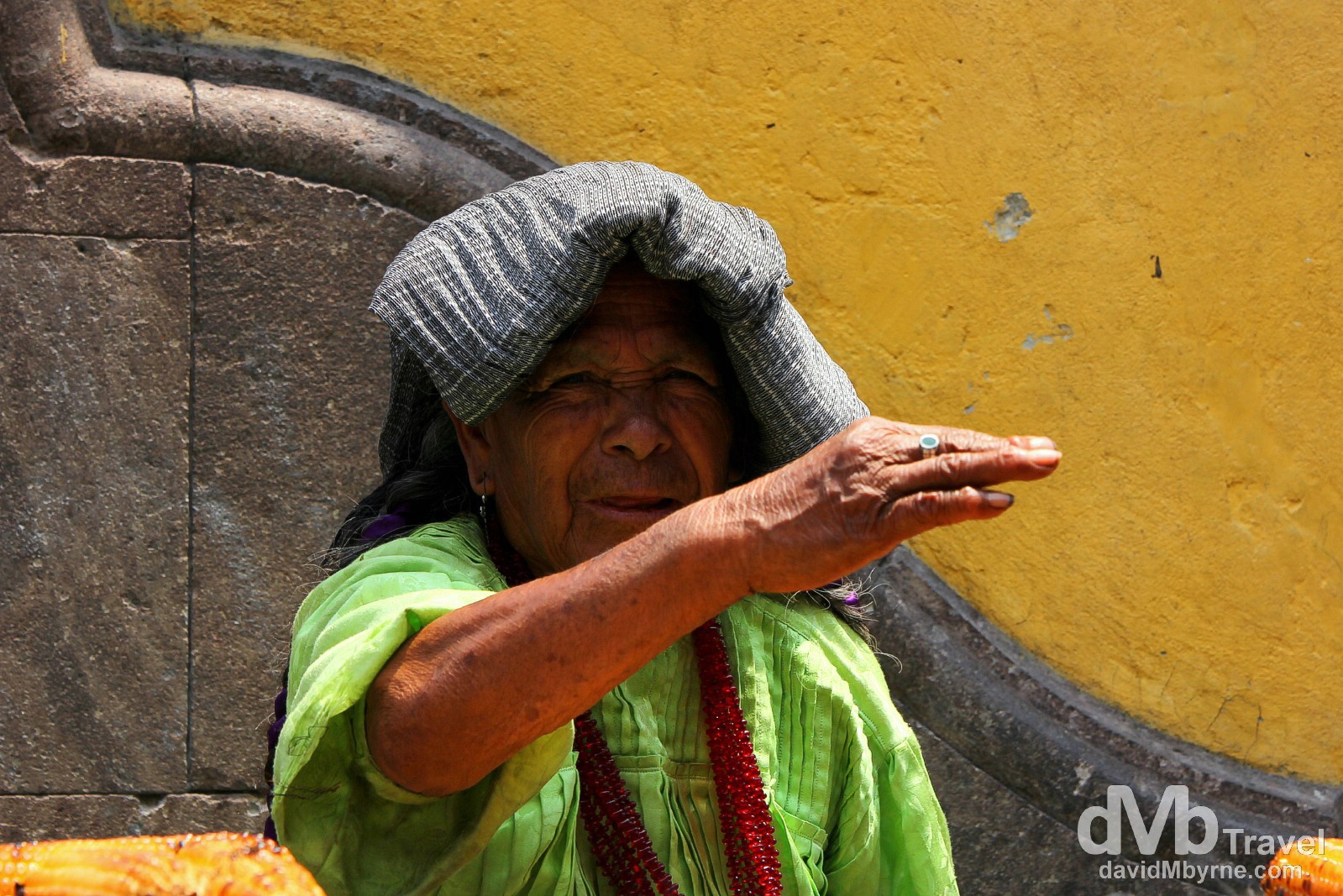 A corn seller on Mondea, moments after launching a cooked corncob at me, the camera totting tourist. I was quite a aways away from her when taking this picture, and her hurl was a split-second, blink-and-you’ll-miss-it event. But she got me (hell of an arm). That made her happy but I don’t think she liked me regardless. Central Mexico City. April 26th 2013. 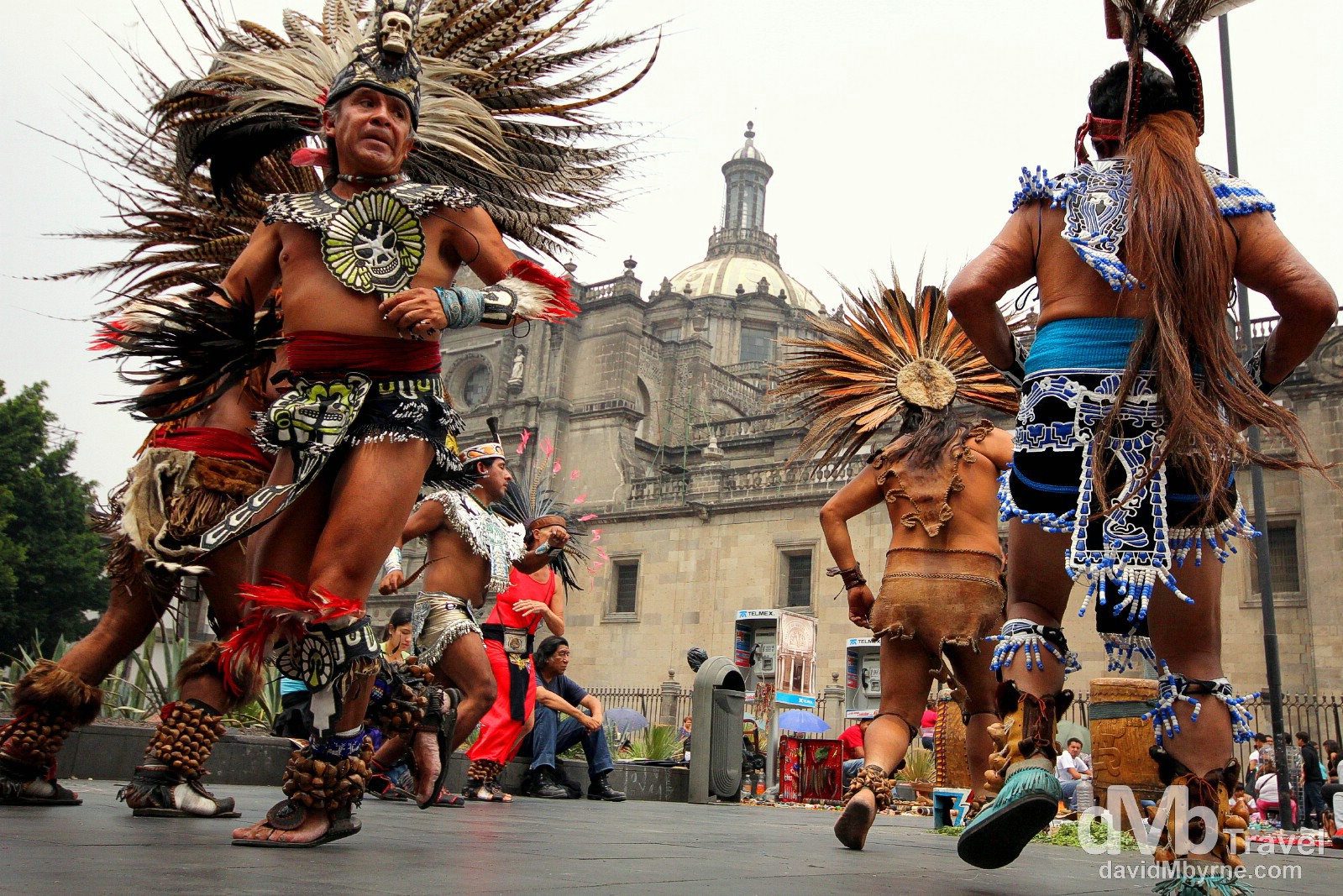 George W. Bush partaking (not really, it just looks remarkably like him) in a for-tourists Aztec war dance in Plaza de la Constitución, also called the Zocolo, in the heart of Mexico City with a section of the Catedral Metropolitana, Mexico City’s most iconic structure, in the background. Mexico City. April 26th 2013. 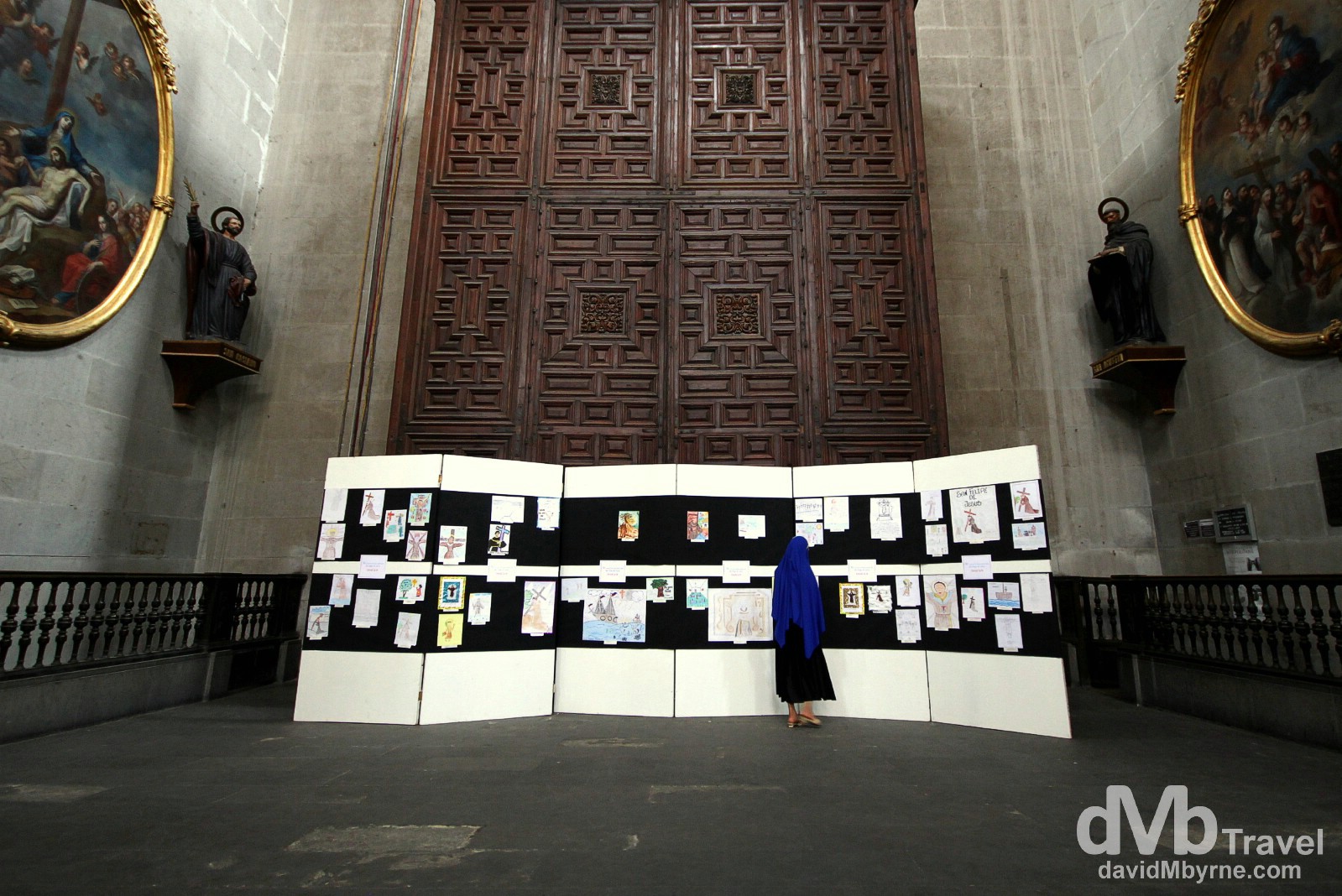 A nun looks at a display in a section of the Catedral Metropolitana, Mexico City. April 26th 2013.

The Spanish were ruthless – they only ever saw Mexico as a silver cow to be milked to finance its wars in Europe & infrastructure projects at home. Within 3 years of arriving they had conquered the Aztecs & almost immediately they set about completely destroying the cities they conquered, including Tenochtitlan, present day Mexico City, before setting about rebuilding them in their own, European style. Hence today most Mexican cities boast glorious palaces, plazas, wide boulevards & churches (of course), some of which were built over the top of existing structures & using the bricks of the destroyed buildings & temples. 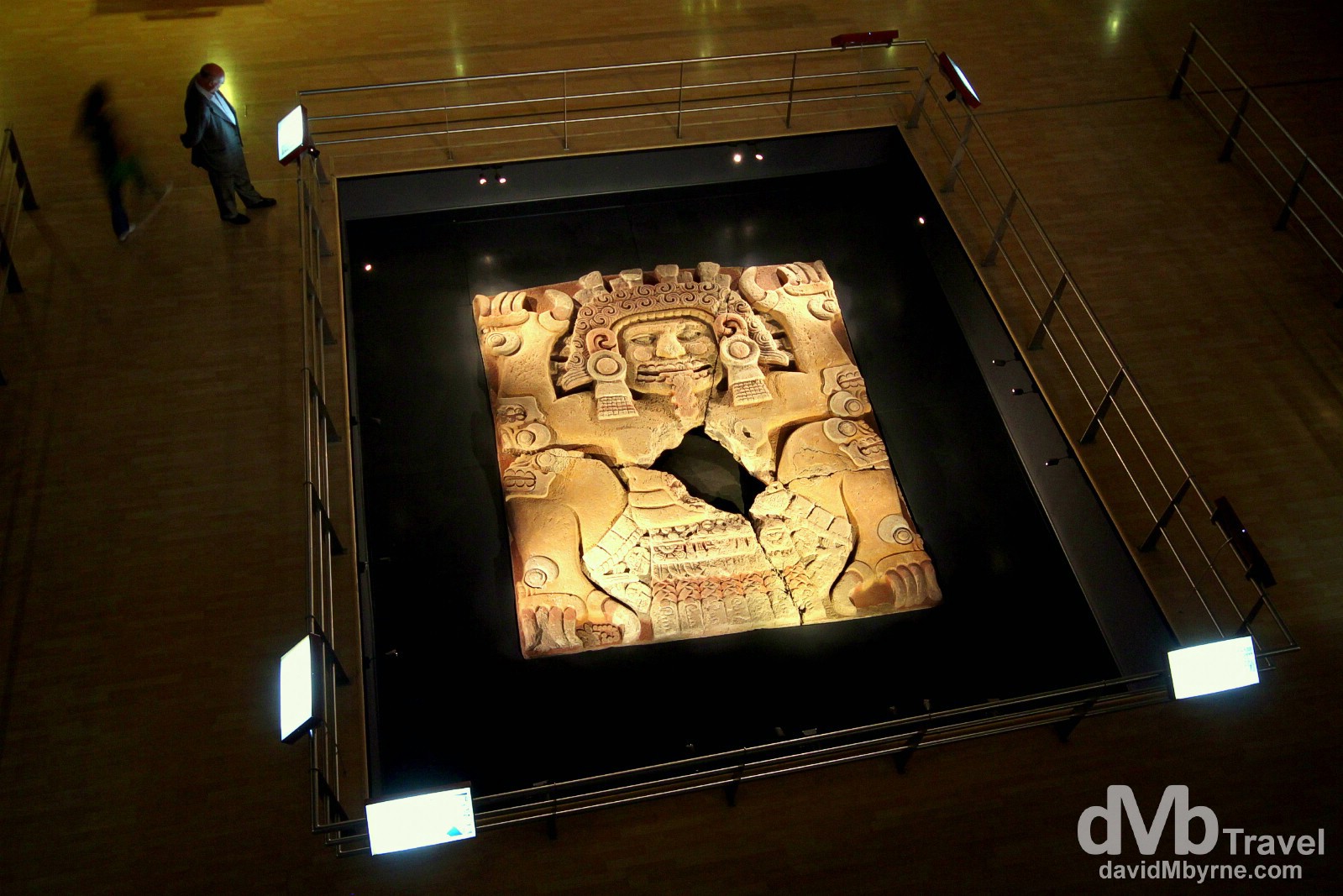 A disc of the Aztec Goddess Coyolxauhqui on display in the Templo Mayor Museum. The Templo Mayor, in the heart of the Zocalo, was once the ceremonial centre of the Aztec capital city of Tenochtitlan. After conquest by the Spanish, Tenochtitlan was levelled & buried under present day Mexico City concrete to be forgotten forever. Then, in 1978, electrical workers happened upon an eight-ton stone-disc carving of the Aztec Goddess Coyolxauhqui. It was a monumental discovery, one that resulted in the removal of the colonial buildings in the immediate area and the excavation of the Templo Mayor, thought to be the exact spot where the Aztecs built their city. The above picture shows the excavated & restored disc, the main attraction of the Templo Mayor museum which does a fabulous job recounting the history of the Aztecs, the formation of the city of Tenochtitlan and its ultimate demise at the hands of the Spanish conquistadors. Templo Mayor Museum. Centro Historico, Mexico City. April 26th 2013. 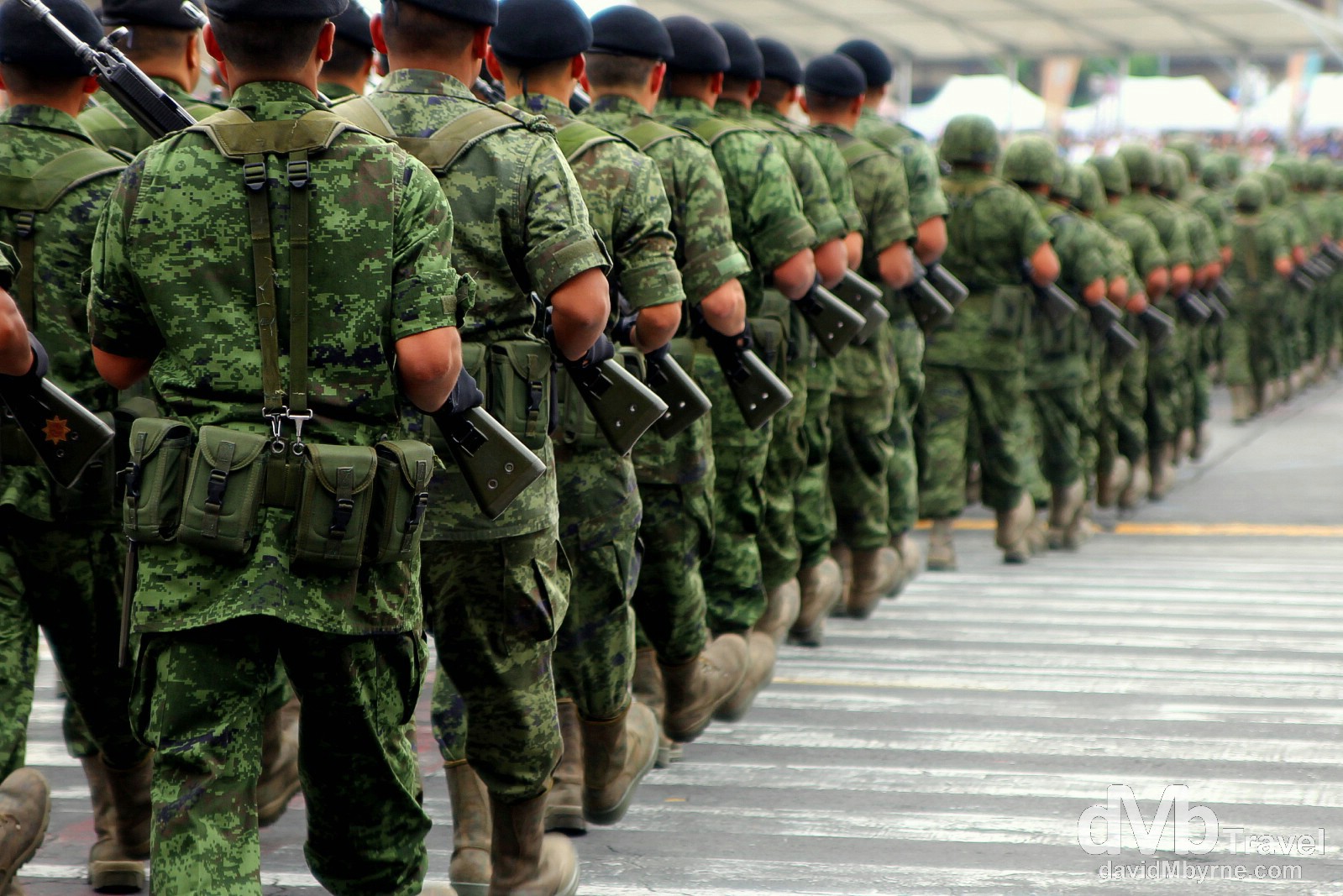 Video || Soldiers of the Mexican Army marching from Palacio Nacional 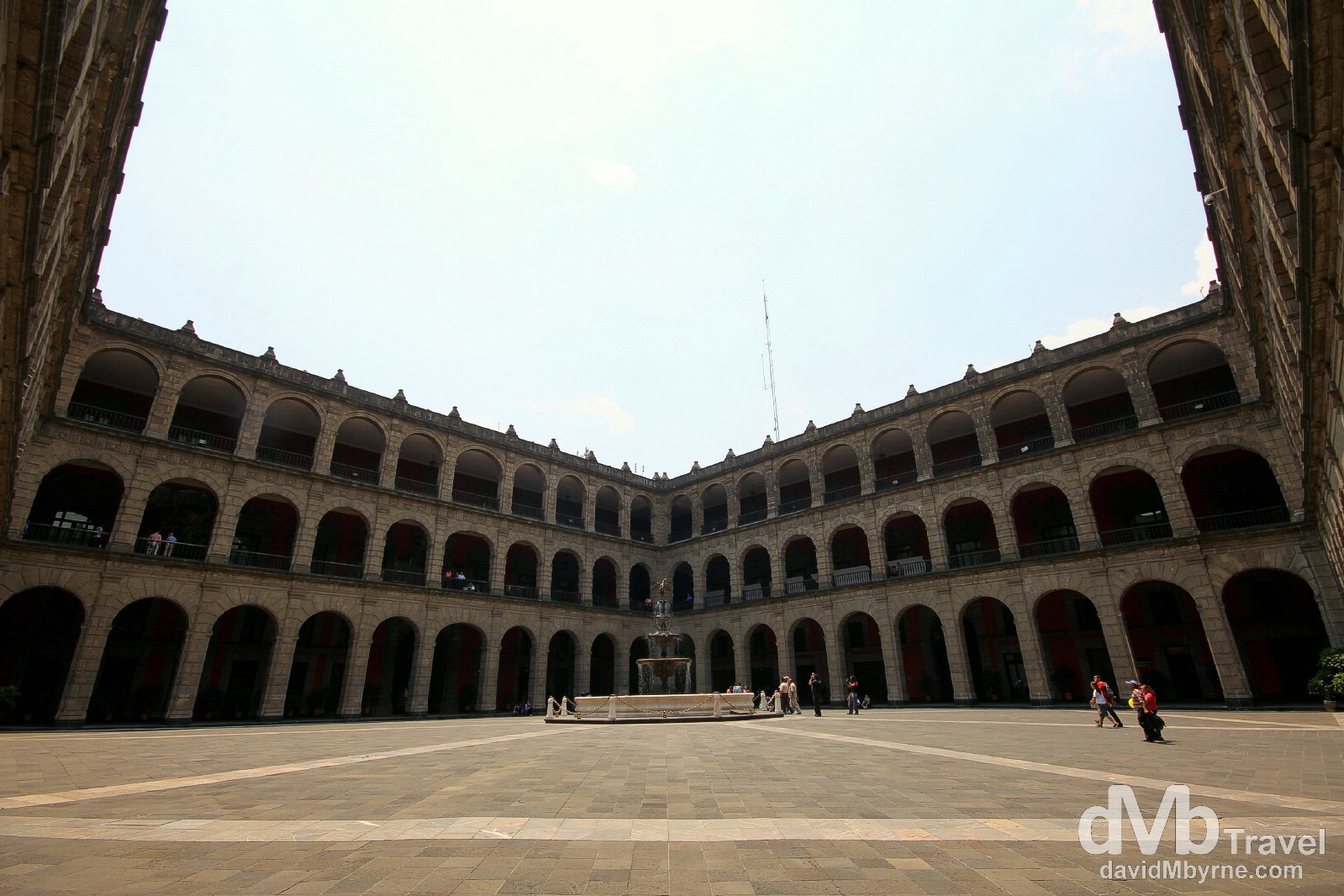 A courtyard in the Palacio Nacional (The National Palace), the home of the offices of the Mexican President. It was nice and quiet in here, a nice respite from the bustle outside. Central Mexico City. April 28th 2013. 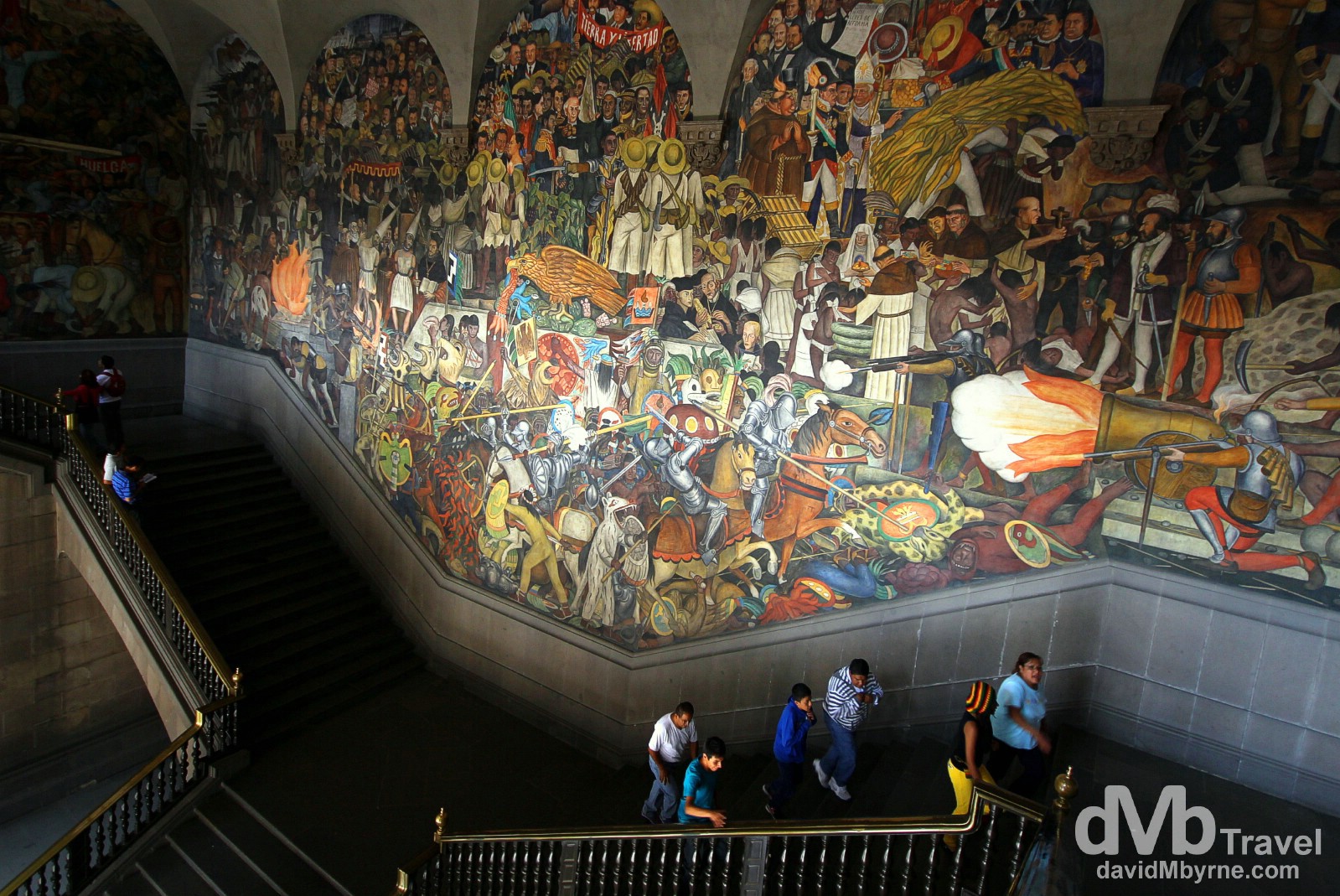 Murals from Diego Rivera, one of Mexico’s most famous artists of recent years, adorn the main staircase of the Palacio Nacional (The National Palace) and is probably the main reason why people who visit the Palacio Nacional do so – Rivera murals can be found in numerous other buildings throughout the city. Centro Historico, Mexico City. April 28th 2013. 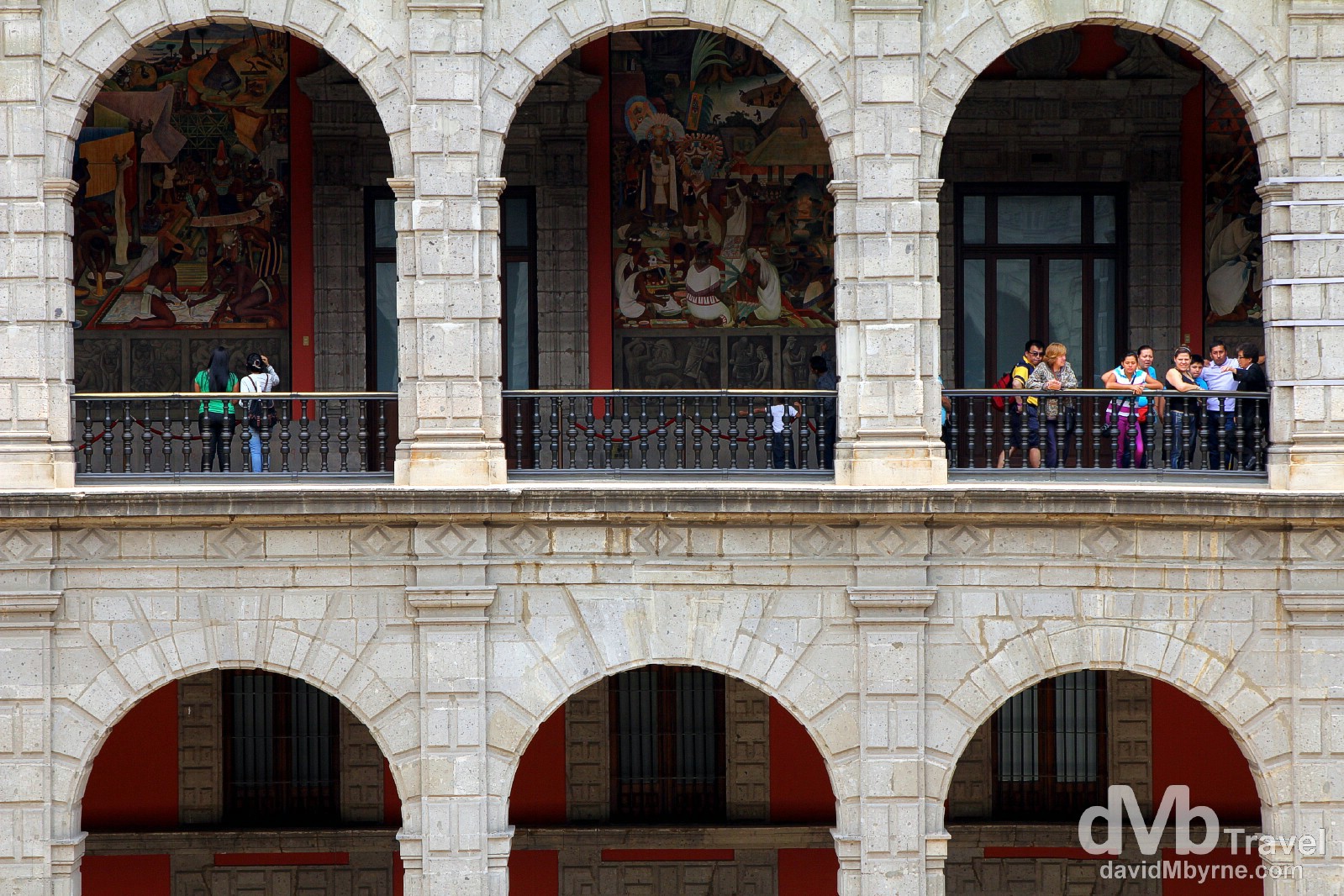 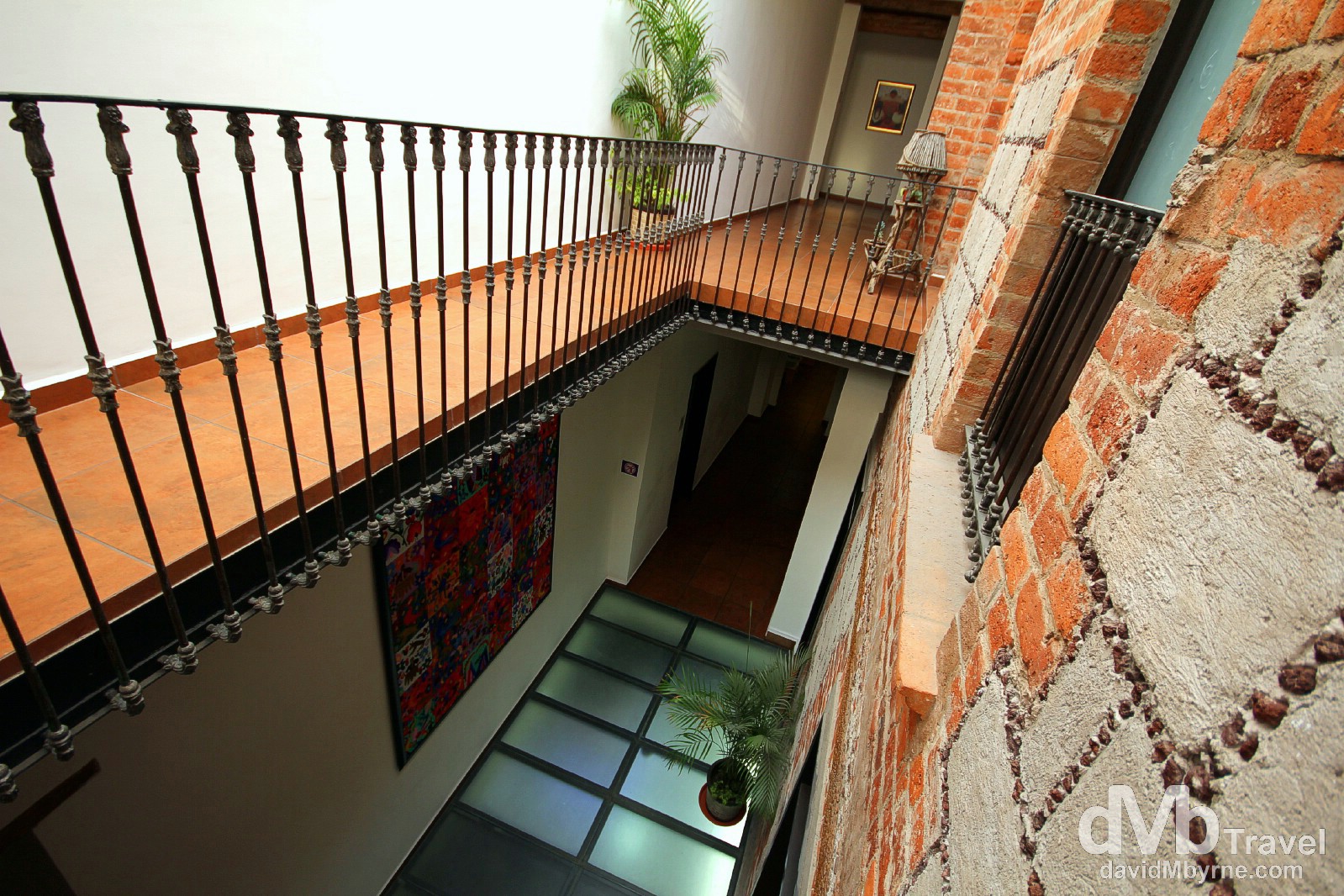 Mexico City Hostel, home for my 5 nights in the city. Since 2000 money has been poured into Mexico City’s Centro Historico to upgrade its image and infrastructure. Streets have been repaved, lighting & traffic flow improved, security bolstered & buildings refurbished. And I’m all for refurbishment if it means I get to stay in a place like this for MXN$160/€10 a night – it’s an awesome hostel. Mexico City Hostel, Centro Historico, Mexico City. April 29th 2013.

I headed out to the suburbs of the city on a few occasions, utilising the super-fast, cheap-as-chips metro (MXN$3 /€0.20 a ride) to get me around. I visited a big church, a nice plaza, & one fot he world’s most famous soccer stadia. 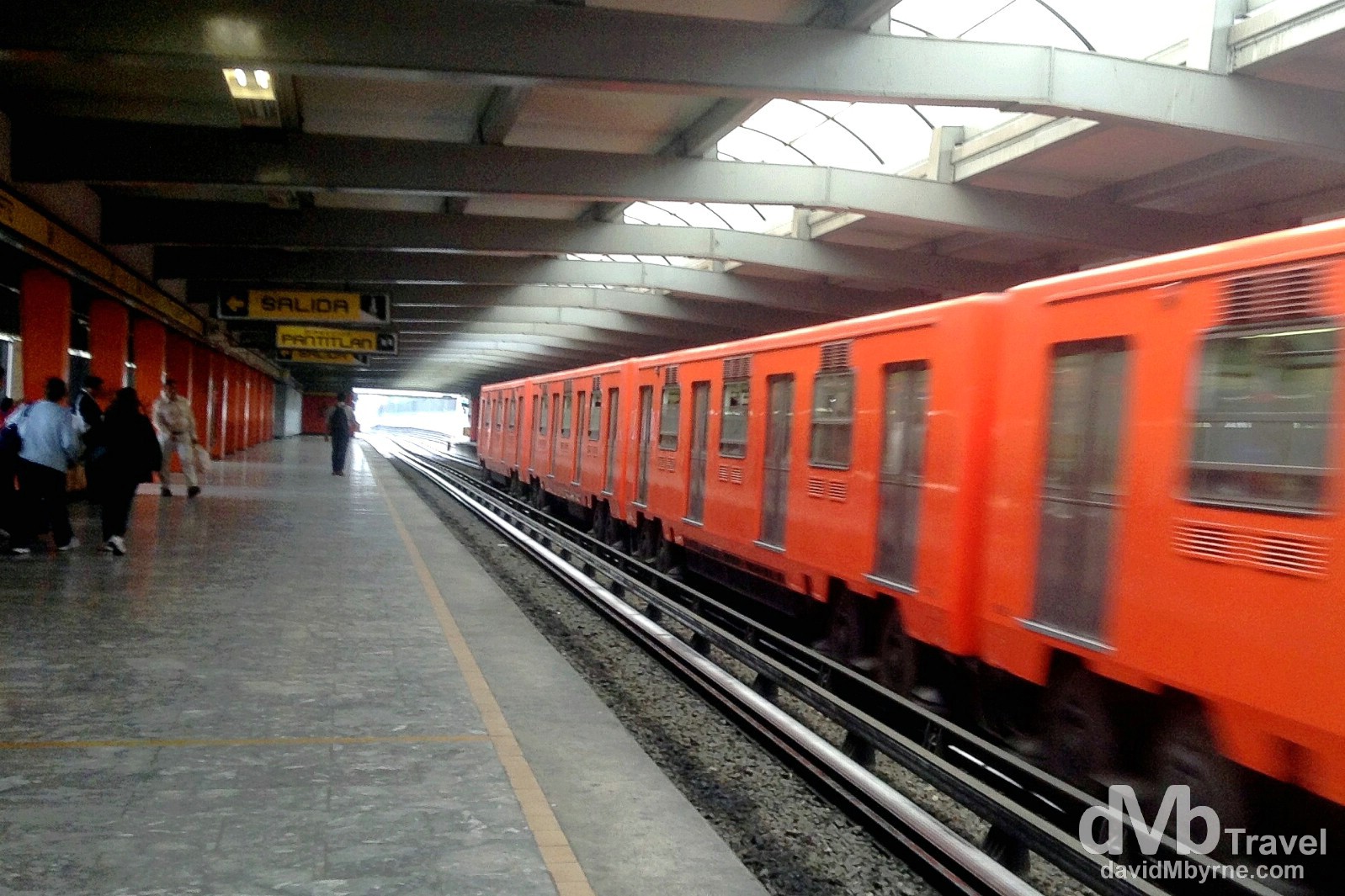 A section of the Mexico City Metro captured on the day I arrived in the city off the bus from Guanajuato. Autobuses Norte Metro Station, Mexico City, Mexico. April 25th 2013. (iPod)

Not all churches in Mexico are centuries old. This is the interior of the Basilica de Nuestra Senora de Guadalupe, Mexico’s most venerate Catholic shrine. The story goes that in the area in 1531 the Virgin Mary appeared not once, not twice, but 4 times, to an indigenous convert by the name of Juan Diego. It took a bit of convincing but eventually people started to believe Juan’s apparition stories & slowly a cult developed around the site. By 1700 a basilica was needed to house all of the pilgrims but by the 1970s that basilica was deemed too small for the numbers it was attracting, necessitating the need for this 40,000 capacity beast. I can only imagine what the queue is like for communion. Basilica de Nuestra Senora de Guadalupe, Mexico City. April 27th 2013. 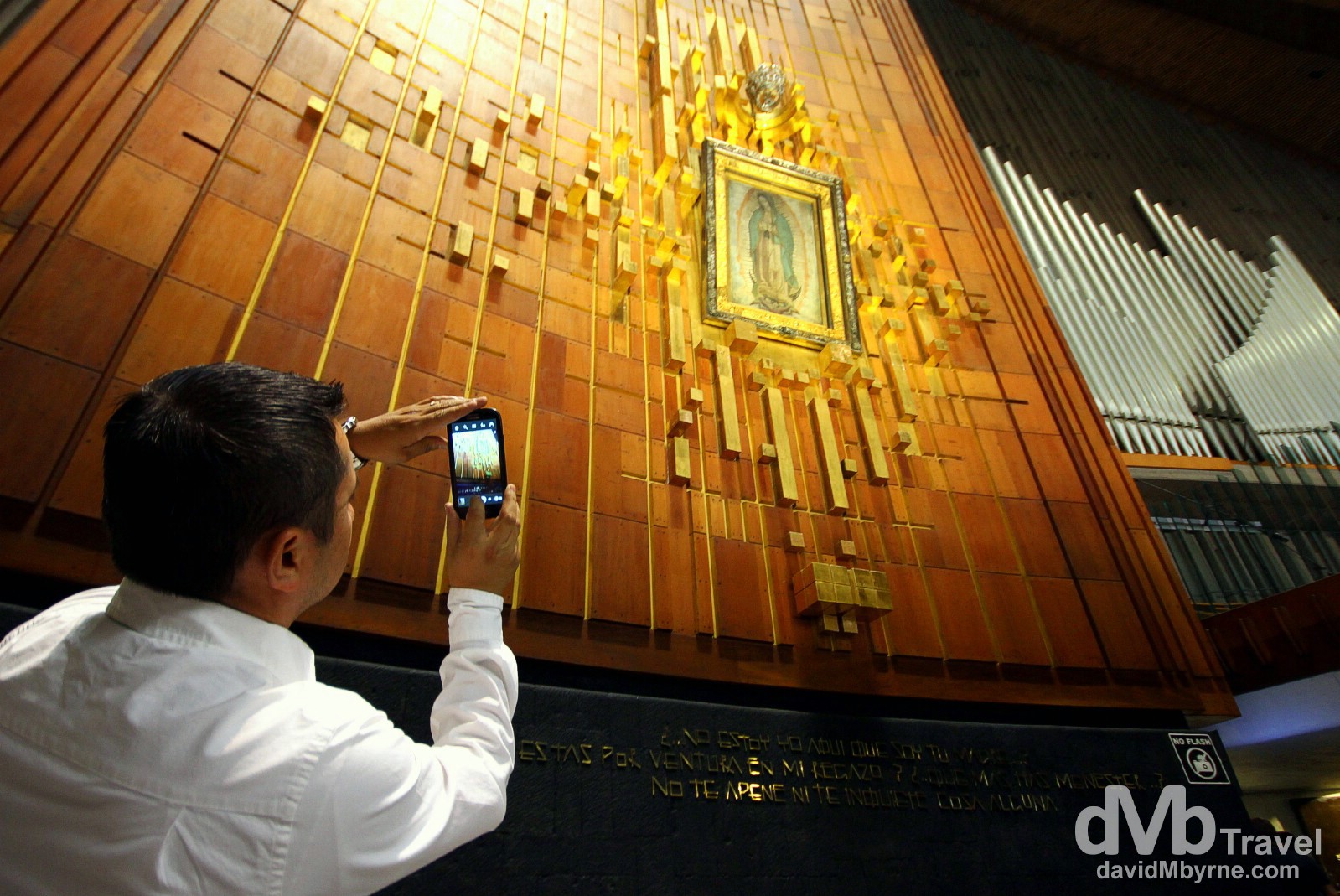 Photographing the Image of Our Lady of Guadalupe behind the main altar of the massive Basilica de Nuestra Senora de Guadalupe. The basilica is so big and attracts so many worshippers/tourists that an airport-esque 3-lane continuously moving walkway carries people past this, the basilica’s most venerated icon, preventing them from stopping. I captured this picture while on the walkway. I wasn’t so much interested in the image as I was of the people photographing it & I needed a few journeys on the walkway to get a picture I liked. Basilica de Nuestra Senora de Guadalupe, Mexico City. April 27th 2013.

Find a plaza or park in a Mexican city on a weekend afternoon and there’s a good chance you’ll see some performance taking place, like this one in Plaza Hidalgo, Coyoacan, Mexico City. April 27th 2013.

For obvious reasons this performance garnered a lot of male attention. There was a lot of wiggling & shaking going on. 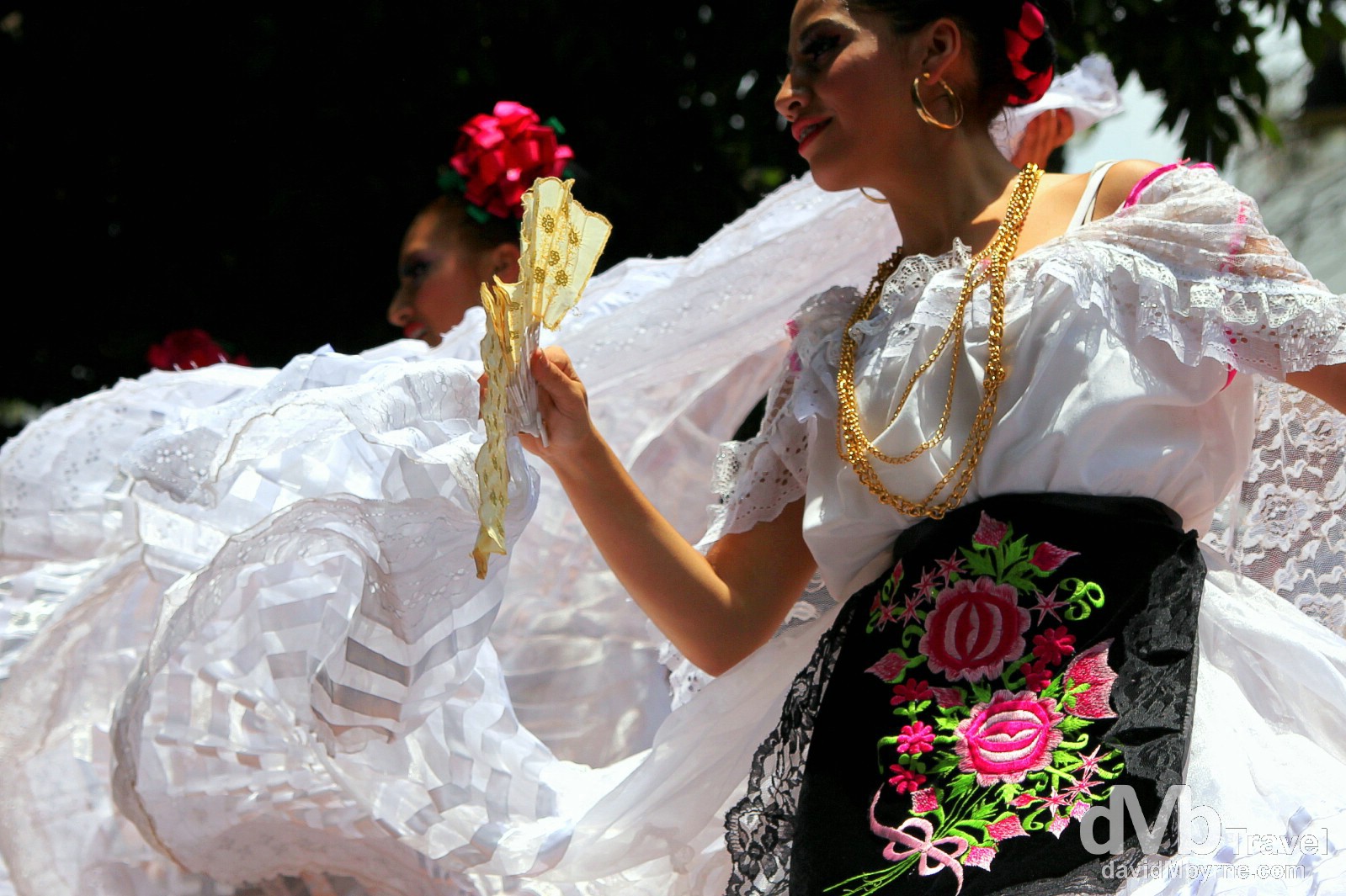 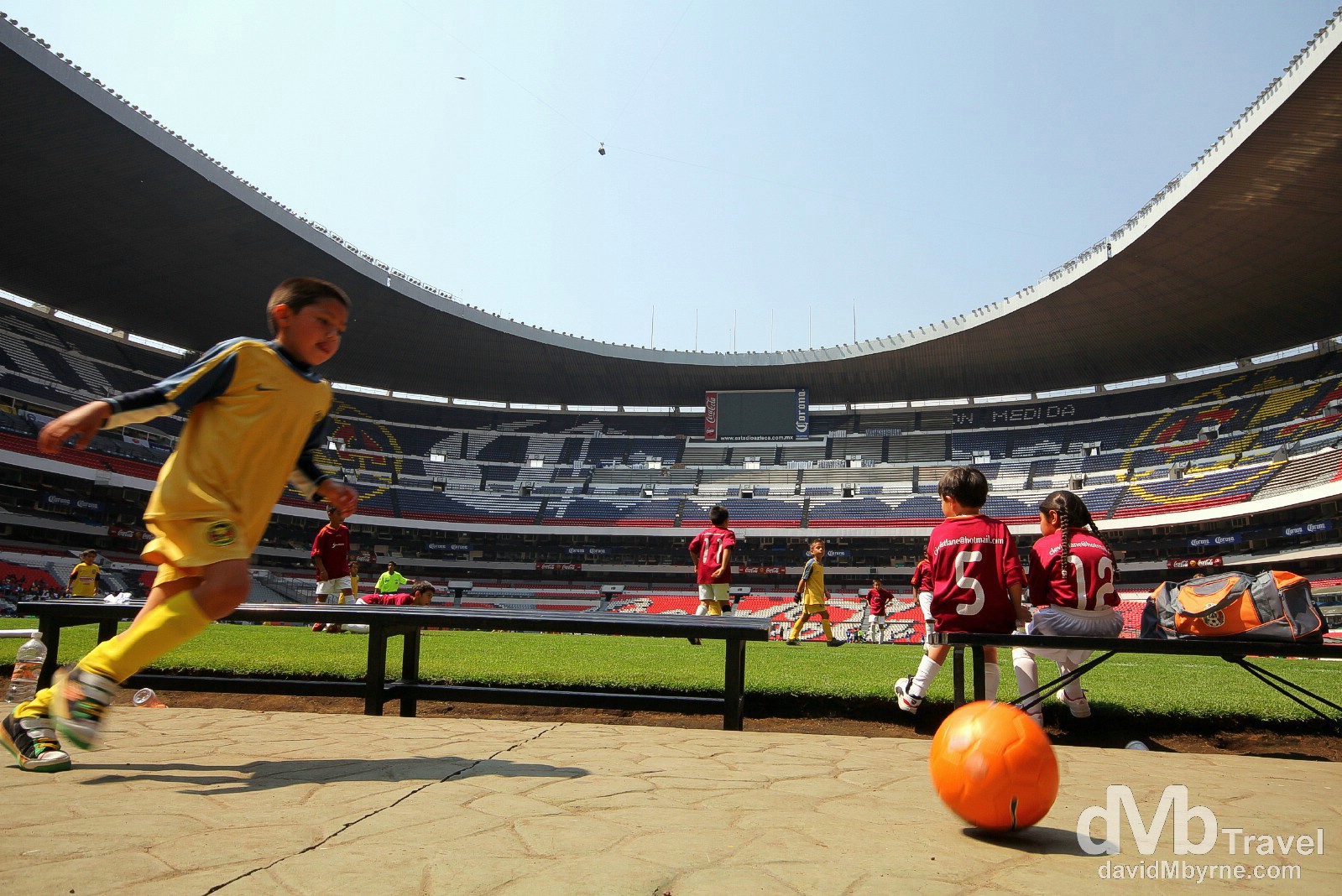 Kids playing soccer in the Estadio Azteca. Mexico 86 is a fond memory of my early childhood so I loved the tour I took of the Azteca Stadium. But I was amazed how small one of the biggest soccer stadiums in the world looked in person. TV really does make things look so much bigger. Estadio Azteca, Mexico City. April 28th 2013.