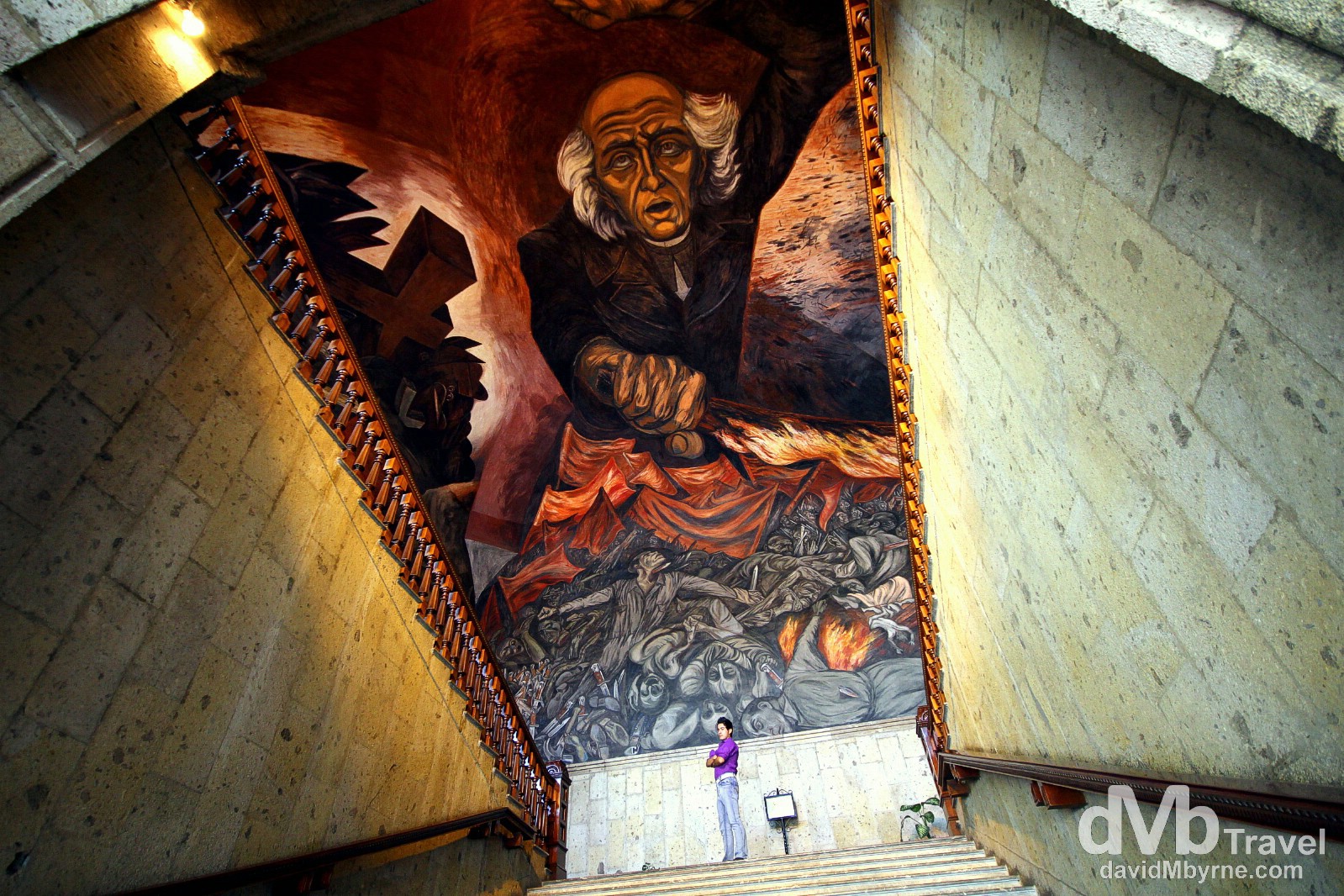 I‘m liking Mexico. Loving it actually. It’s early days of course (today is my fourth day in the county) buy hey, if I liked Tijuana, and I did for the brief time I was there, then it’s pretty obvious that it doesn’t take much to appease me & thus the rest of Mexico should be easy. Guadalajara certainly was. This is an historic city, the birthplace of mariachi (a group of Mexican street musicians) and tequila & a city boasting a wealth of architecture from the Spanish colonial era, as, I’m suspecting, do most Mexican cities of any decent size.

I class Guadalajara, being an urban centre aside, as my first sampling of Mexico proper (sorry Tijuana, you don’t qualify). It’s a big, busy city, Mexico’s second, with a population over 3.5 million but yet always seems to remain serene. That’s quite the accomplishment. It’s easy being a tourist here, something Guadalajara doesn’t seen to get many of – I’m the only patron in my hostel, the comfy Blue Pepper. I’ve taken it easy & I’ve had fun. And I’ve also taken a few pictures but not too many. 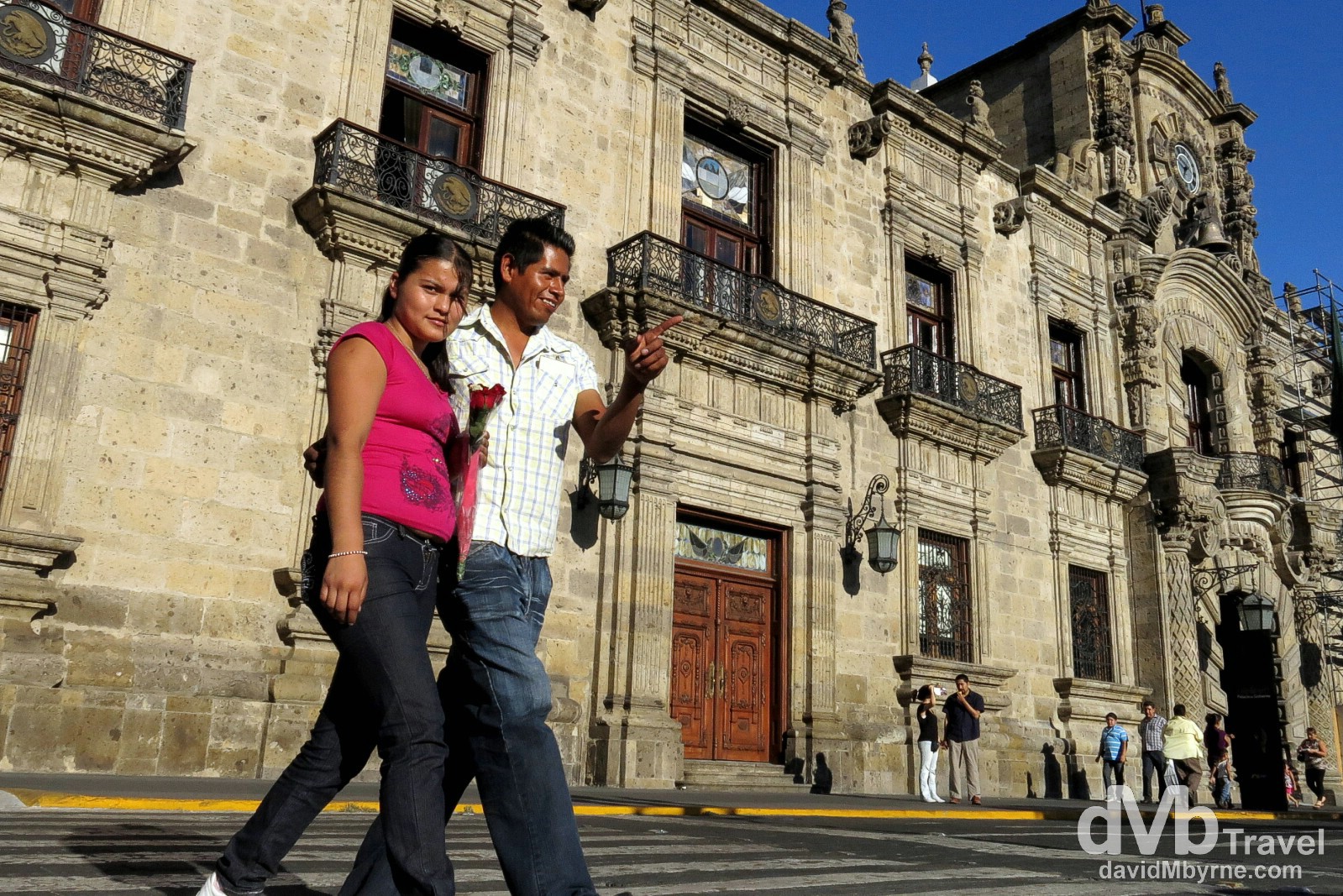 Crossing Avenue Corona in front of Placio de Gobierno. Guadalajara is considered a colonial city though much of its architecture dates from the independence period. The compact city centre, Centro Historico, is awash with leafy, gushing-fountain plazas & gorgeous colonial buildings, including the above neoclassical Palacio de Gobierno (Governor’s Office). Dating from 1774, this is the historical centre of the government of the State of Jalisco, of which Guadalajara is the capital. Today it is mostly visited for the murals on display there by José Clemente Orozcoa (1883-1949), a Mexican social realist painter who specialized in bold murals that established the Mexican Mural Renaissance. Guadalajara (

The José Clemente Orozco mural of Miguel Hidalgo in the Placio de Gobierno. The massive 1937 mural dominates the building’s interior stairway. It’s quite the sight. Hidalgo (1753-1811), a Mexican priest and a leader of the 1810-1821 Mexican War of Independence against the Spanish, brandishes a torch in one fist while the masses struggle at his feet. Placio de Gobierno, Guadalajara, Mexico. April 20th 2013. 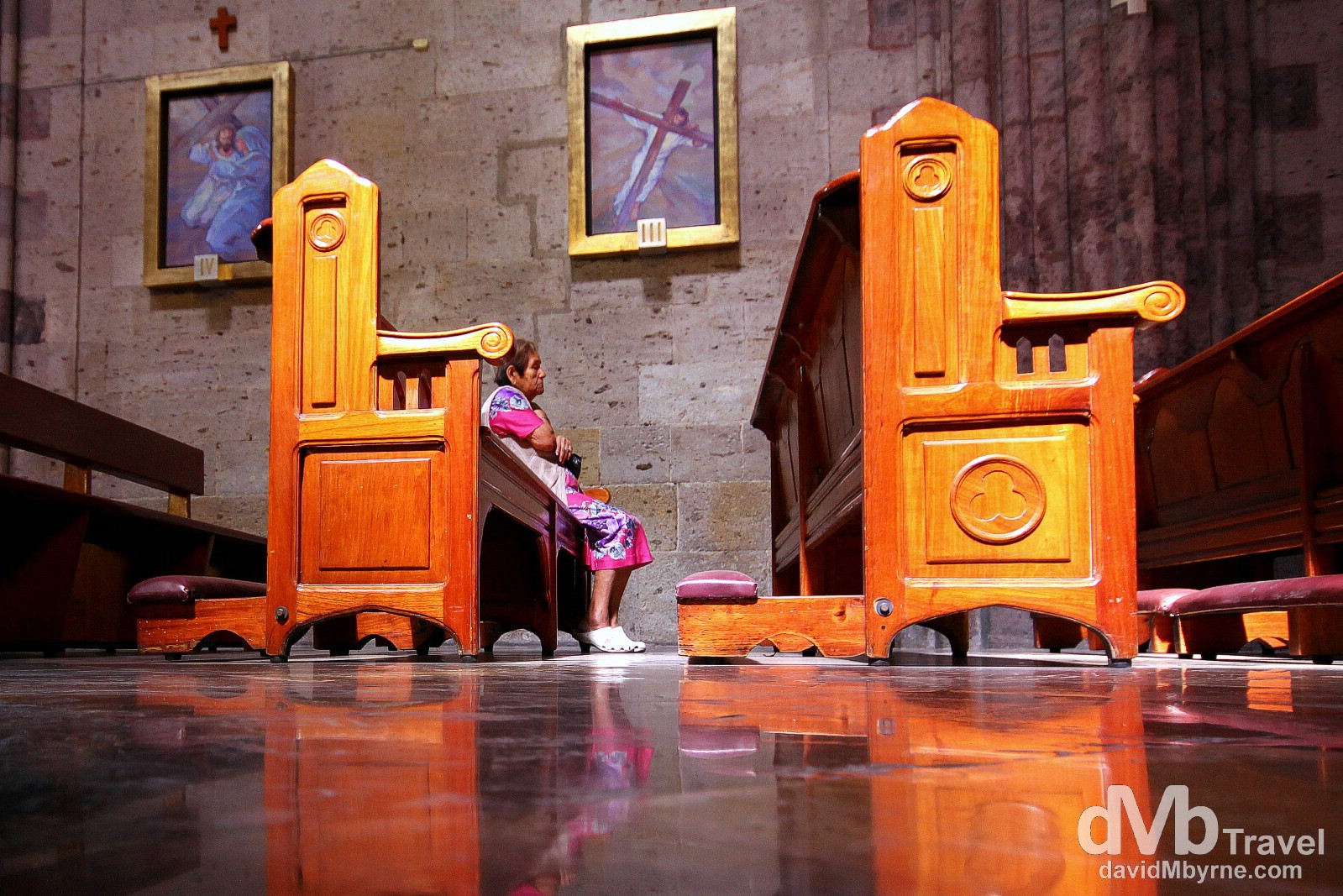 Sitting in Expiatory Church Of The Blessed Sacrament. This is my very first picture inside my very first Mexican church. I suspect it won’t be the last. Yes, I know it’s a hugely impressive Gothic church that took 75 years to build (1897-1972) & one that is considered to be the greatest work of its kind in Mexico. I know all of that but I still preferred this picture captured inside the church to any I captured of its impressive exterior. Guadalajara, Mexico. April 20th 2013. 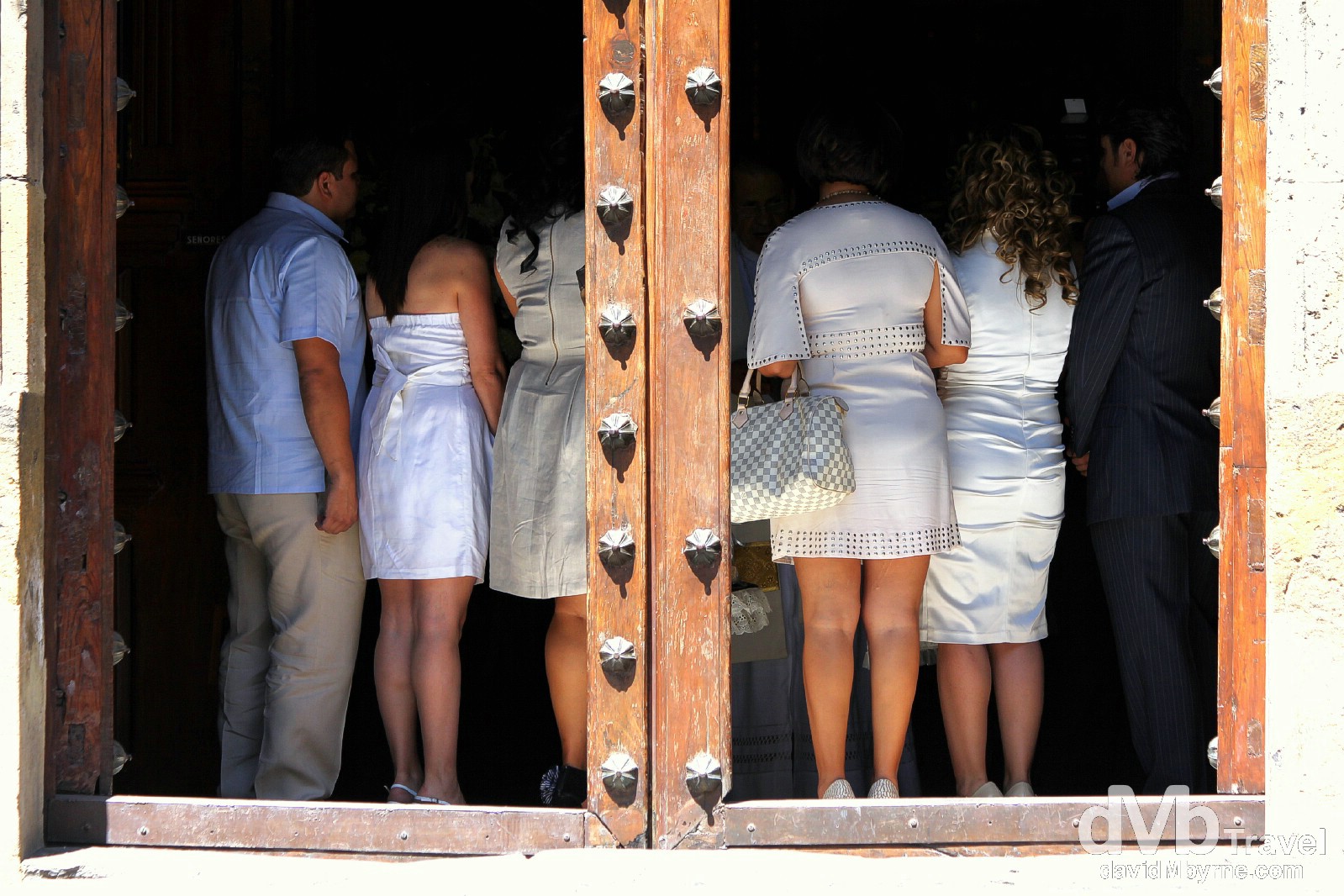 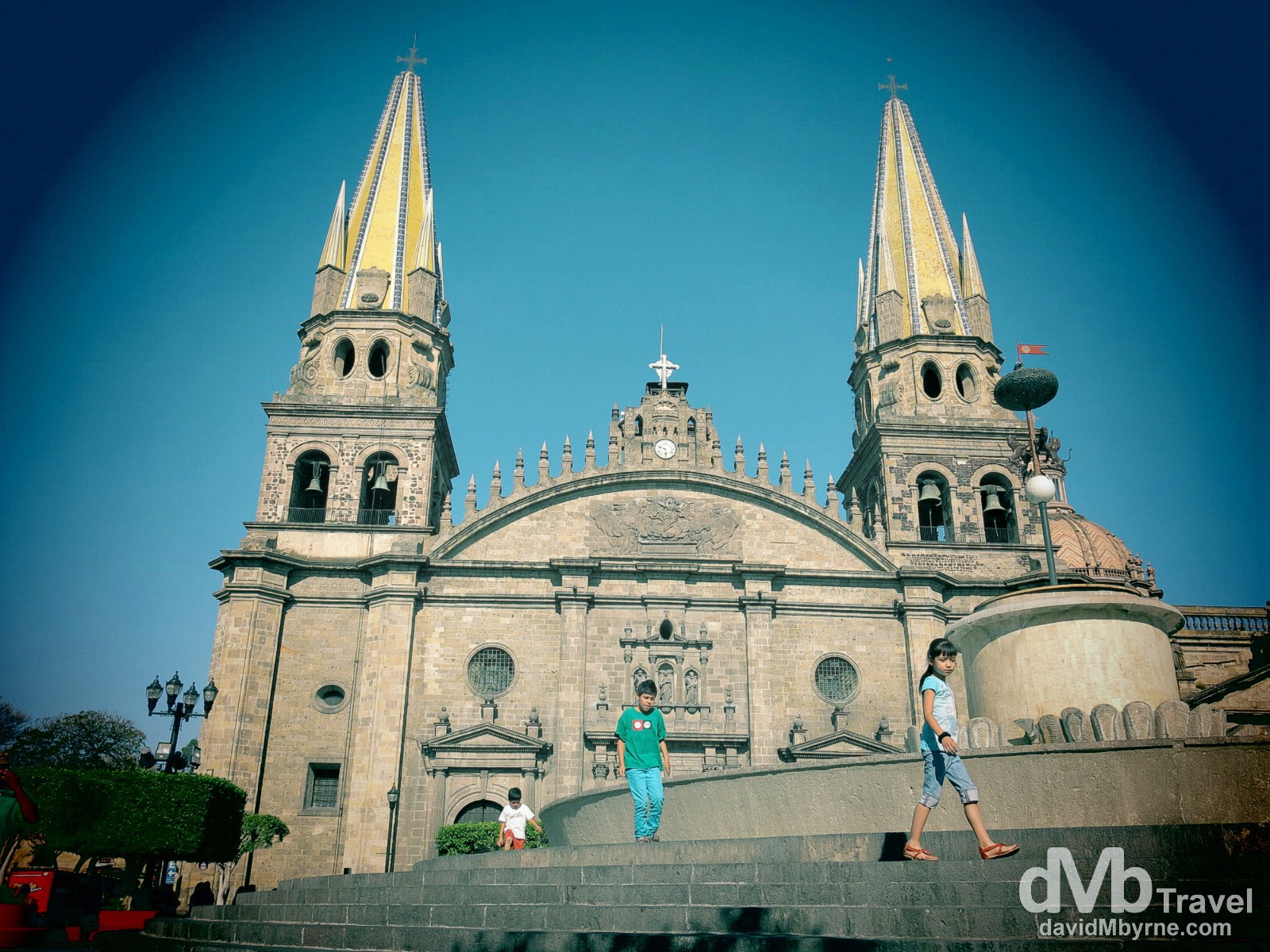 Children on the steps of a fountain in Plaza Guadalajara fronting Guadalajara Cathedral. I didn’t take my SLR out much in Guadalajara. I had my point-and-shoot with me today and was playing around with its settings (I only have it a few months and haven’t really used it all that much). The above picture was captured in Toy Camera mode which accounts for the filter & vignette effect. The twin-towered cathedral is Guadalajara’s most beloved landmark. Surrounded by no less than 4 plazas, it was begun in 1558 and consecrated in 1618, meaning it’s almost as old as the city, which itself was founded in 1542. Guadalajara, Mexico. April 21st 2013. 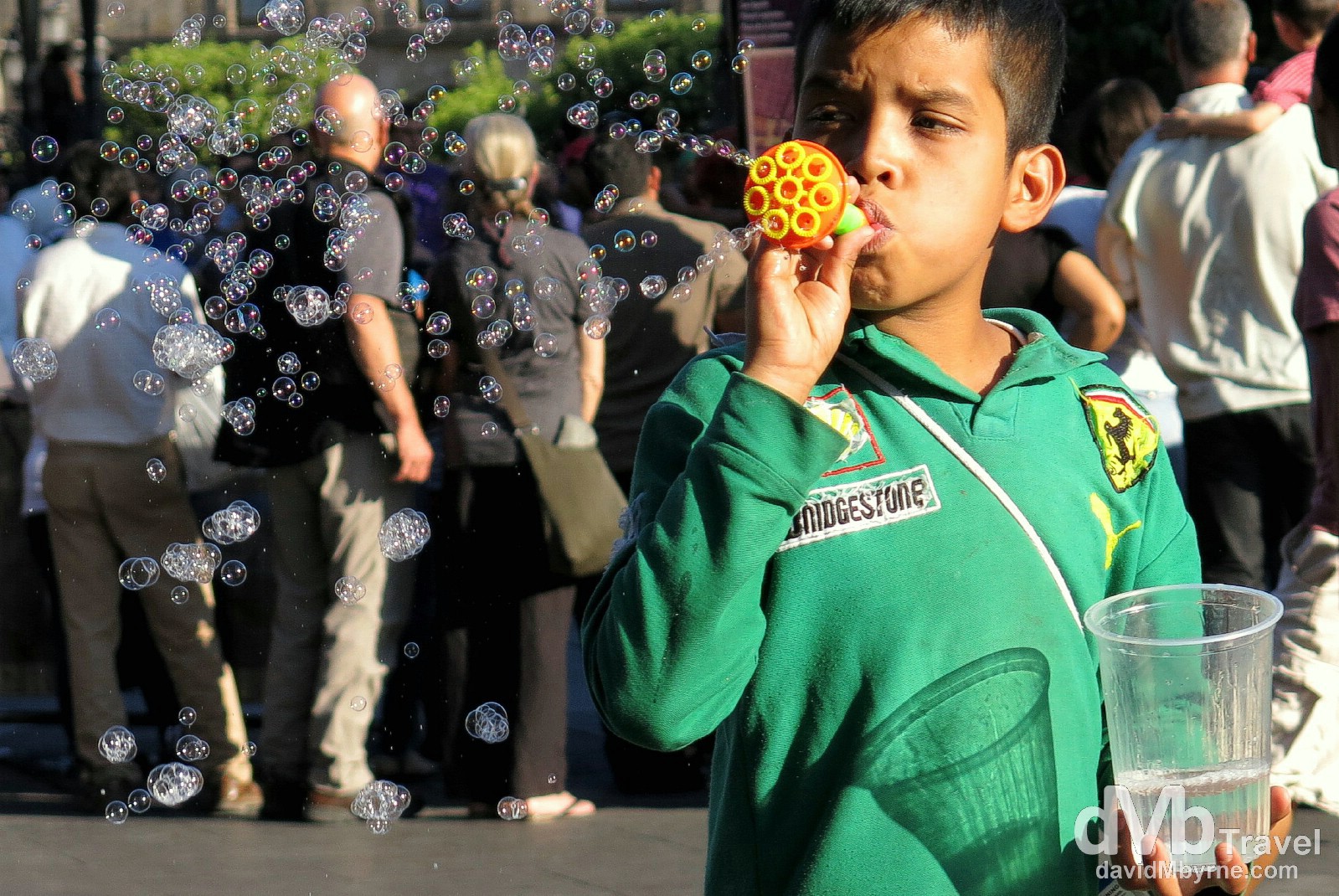 Blowing bubbles in Plaza de Armas. Commandment 4, Keep Holy the Sabbath, is still staunchly upheld here in Quadalajara, as I suspect it is all over staunchly Christian Mexico. Most shops close & the streets fill with families, street performers & food carts. There’s quite a buzz. I spent today, my first Sunday in the country, in & around the centre of Guadalajara. I was ogling at buildings, the buzz & the locals around me & the locals around me were happy to ogling right back. Guadalajara, Mexico. April 21st 2013.